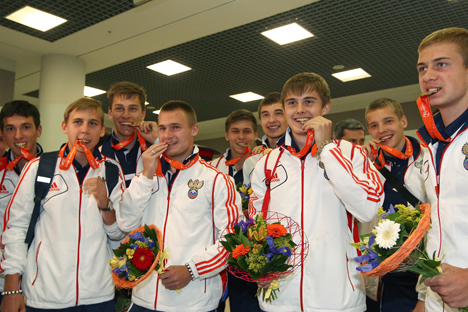 The national U17 team plans to win the World Cup. Source: RIA Novosti

Russia’s U17 team beat Italy in the European Championships final and becomes champions for the second time. Last time the team was champions of Europe in 2006.

Russia’s Under-17 soccer team are the 2013 champions of Europe. The team started its journey toward the trophy back in September 2012, losing its qualifying round opener 3–0 to the Czech Republic. But the team then bounced back to beat Montenegro 3–0 and moved forward into the elite round.

Here the Russian team faced the nation that invented soccer – England – as well as perennial performers on the European stage, Portugal. Russia beat Slovenia and England to earn a place in the final tournament of the UEFA European Under-17 Football Championship.

The Russian team’s head coach and former CSKA midfielder, Dmitri Khomukha, got his players’ minds set on nothing less than victory from the very start of the final stage in the competition.

“People were clearly underrating us at the beginning of the tournament, but when we beat England and Slovenia our opponents had to think again,” said Khomukha. “I think my boys can go all the way. We’ll do everything we can to win the tournament.”

Khomukha’s prediction turned out to be right. In their first match, against Ukraine, the Russians secured a very easy win with a score of 3–0. A sure-footed start like this could only boost the team’s confidence.

Fortune continued to smile on the Russians in the remaining matches of the tournament. Hard-fought draws against favorites Croatia and Italy saw Russia secure a top place in the group.

One of the team’s key players – Lokomotiv Moscow midfielder Dmitri Barinov – played a significant role in its success. Barinov was involved in virtually every goal the Russian team scored in the tournament.

The parents of the young talent from Ogudnevo, a village in the Moscow Region, could hardly have imagined this happening. When he was eight years old, Dima signed up for the football academy in the nearest town, Shchelkovo, which was 30 kilometers from his home.

Despite the distance, the young boy never missed a training session. Barinov’s family didn’t have the money to buy him a kit or pay for his fares, so his first coach, Viktor Tikhonov, undertook to do this himself.

He nurtured Dima like his own son, but a few years later Tikhonov became seriously ill and died. The sports academy helped get Barinov into a football boarding school, where he became a real star, and at the age of 15 he moved to Lokomotiv Moscow. Barinov is now gradually being brought into the club’s starting line-up.

After winning their group, the Russians were paired against Sweden in the semi-final. Ninety minutes of soccer couldn’t separate the sides, so everything hung on a penalty shootout.

Here the heroism of Russia’s goalkeeper Anton Mitryushkin combined with some sharp shooting by the penalty-takers to produce a final score of 10–9 in Russia's favor.

Sports run in Mitryushkin's family. His father played bandy for Yenisey Krasnoyarsk, winning the Soviet Championship on a number of occasions. When Anton was seven years old, his family moved from Krasnoyarsk to Rostov, where he began training with the local soccer club, SKA Rostov-on-Don.

When he was 14, Anton was spotted by scouts from Spartak Moscow and didn’t need to be asked twice to make his move to the capital. After playing for two years in the red-and-whites’ academy, Mitryushkin moved into the youth team, where he won a championship medal in his first season.

Anton’s leadership qualities made such an impression on the team’s coach Dmitri Khomukha that he was appointed captain.

Before the final against Italy, another leading player in the junior team, Dzhamaldin Khodzhaniyazov, said the team would go all out to win the trophy. “We haven’t come all this way to lose in the final,” said the player.

Khodzhaniyazov, whose idol is the legendary German defender Franz Beckenbauer, was born in Turkmenistan. Some scouts from the Tolyatti soccer academy came to the former Soviet republic and took the ten-year-old Dzhamaldin back to Russia. This year, he transferred to Zenit St. Petersburg.

Khodzhaniyazov was at his best against Italy, fighting for every ball, and the St. Petersburg player’s teammates matched his performance. Despite the fact that the Italians had had an extra day’s rest, the Russians were more than a match physically for the Squadra Azzurra.

The match went to a penalty shoot-out too. Russian goalkeeper Anton Mitryushkin virtually achieved the impossible, saving three out of seven penalties. His teammates simply couldn’t let the hero of the competition down, finally winning 5–4.

After this beautiful victory the best player of the championship, Anton Mitryushkin, like a real captain, did not give way to his emotions: “We’re all very happy, and it was a very difficult win. But we mustn’t ease off; we need to train even more.”

Dmitri Khomukha, the "golden" team’s head coach, said that the team now has a new objective: to win the world championships. “This team has character,” he said. “The European Championship is an invaluable experience, and nothing can take its place. The guys have realized what level of competition they’ll face in the future if they get to play in professional clubs. Now that we’ve won the European championship, I think we’re going to do our best to win the World Cup too. I hope this is just the beginning.”

The Russian youth team have been champions of Europe before, in 2006. Now the national team will go to this year's world championship in the UAE, which takes place from October 17 to  November 8.