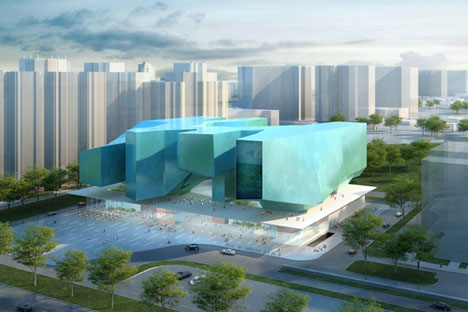 Italian architect Massimiliano Fuksas and the Russian architectural bureau Speech recently won a competition held by the Educational Centre of the Polytechnic Museum and Lomonosov Moscow State University and are now in charge of creating the new building that will house the museum. According to Fuksas, quoted in Architizer, the idea for the project came from the desire to communicate with the architecture of the past and at the same time come into conflict with it. Gizmodo compares the complex with an iceberg of irregular form, whose 4 parts symbolizes the four natural elements. Both sites agree that the project is noteworthy. “[...T]his newcomer is a copper-clad beauty,” - writes Eric Limer from Gizmodo. The opinion of Archtizer is simple but counts as a full endorsement: “Keep an eye out for this exciting project!” The readers are impressed with the project too. User ahentwiggles named the building the new Russian Fortress of Solitude. “That building looks pretty awesome. Kind of wish public works like this were more prominent”- another user, atatassault47, commented.

Exciting news this week come from the financial sector. “TMT Investments, a UK-headquartered venture fund backed by Russian businessmen, has invested $350,000 in Graphicly, a US startup that helps publishers and self-published authors produce and distribute text and visual content on major digital publishing platforms.” - EWDN announced. Headquartered in Palo Alto, this startup also received the support of TechStars, 500Startups, Mercury Fund, Tim Draper, Dundee Venture Capital and Lowercase Capital. To date it has been used by 6.000 publishers.

Photo-browsing app Cooliris, another Silicon Valley based project, expanded in Russia earlier in February. After its first 2 months in business, the startup reported that Russia has consolidated its position as the 5th country for total new downloads and 10th for number of users. The latest version of the app, which was released on April 4, introduces the concept of "endless discovery" - a new feature that enables users to access a wider range of images, offering a deeper integration with social networks such as Facebook, Instagram and Flickr. Cooliris’ CEO Soujanya Bhumkar told RBTH: "We're thrilled with our success in Russia – we are seeing extremely high engagement from Russian users with Yandex.Fotki and other sources in the Cooliris iOS app. We look forward to furthering our strategic partnerships in Russia to make media with messaging the best experience in Russia. Pixels are indeed the new decibels."

Instabank, a new Russian online banking service (similar to Simple), provides users with the ability to make a transaction via mobile app by verifying their Facebook account, according to a report by Venture Village. The service is now at an invite-only stage. Venture Village’s Nina Fowler wonders “How will customers feel about mixing their personal finances with social interactions on Facebook? For Instabank, will customers be willing to go for a solution that isn’t branded to look like part of an established bank?”  RBTH will delve deeper into these issues in a special report to be published next week.

Previous post: Thinking ahead: Snow economy in Sochi and psychology via app