Adventure Race Regatta: On the Way to Arkhangelsk 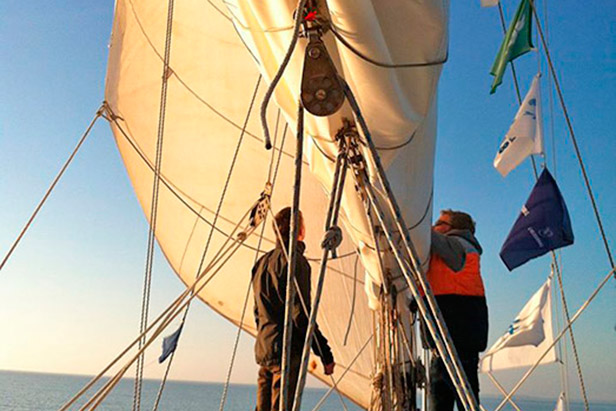 "Three in a boat not counting the stopper": June 22

The day could have been described as boring, were it not for the great weather and our knack for seeking out adventure.

It was a rather late in the day when we arrived at Lodeinopolsk Bridge on the Svir River (in the north-east part of Leningrad Oblast, Russia, near the administrative border with the Republic of Karelia), so we had to wait until midnight for it to be raised. Having traveled through Ladoga (Lake Ladoga is the largest lake in Europe, and the 14th largest freshwater lake by area in the world), where the night-time temperature out on deck touched zero, we plunged into summer. Some of the crew dived straight from the yacht decks into the water, bathed, dried off, and warmed themselves. It was the first balmy summer day since the start of the trip.
We would have enjoyed the sun and warm water a bit longer if part of the team had not wanted to go to the store. Our boat had already been repaired by deckhands from aboard the friendly Peter I (once again we thanked the crew with condensed milk), so we decided to use it immediately. The adventure began as usual: two "sailors" disembarked ashore, with one left guarding the boat. The yacht Alter Ego was anchored nearby, but it decided to turn around. It brushed against the rope to which the boat was moored. As a result, the rope tightened and pulled the stopper out of the boat: the "dinghy" began to deflate and sink with Olya the blogger inside it.

The Swedish team came to the rescue. A boat was lowered from the yacht ISA, but that immediately stalled and began drifting with the river's current. By a happy coincidence, it floated right into the path of the Alter Ego, where we managed to catch it and start it up. We also saved our "dinghy" and Olya.

One of the swimmers, Serge, went to help. He scooped water out of the semi-deflated rubber boat, and in response to the questions of a curious fisherman replied, "We got an international regatta going on here..." Remembering this story, the whole team chuckled all evening.

And so it was: a full moon, masts reaching upwards to the heavens, just a few miles before our first sluice gate. The gates did battle with both lookout shifts. Other crews likewise kept a constant vigil. After the gates, our mission was to refuel. Along the way, the night watch managed to save the yacht Aurora, which had run aground. The shortest night of the year was for us very long indeed.

Arriving at Onega Lake in the evening. Credit: Rusarc.

Great weather once again. Our flotilla moved along the Svir River towards Lake Onega (located in Karelia, Leningrad and Vologda Oblasts, it is the second largest lake in Europe, after Ladoga).

The day-time sluice was fun. The crew of the Alter Ego was gaining experience and working more in sync. The evening was incredibly beautiful: another full moon, white nights becoming ever whiter. At about 1 am, we moored in the town of Voznesenie, where we disembarked and visited the local house of culture (a.k.a. pub and disco).

4 pm. We entered Onega (a town in the north-west region of Arkhangelsk Oblast at the mouth of the Onega River, 7 km from Onega Bay in the White Sea).

Petrozavodsk greeted us with a lovely sunset. We were already accustomed to not splitting up into watches, but to spend more and more time together, chatting. Yesterday we boiled a real samovar over some pine cones! Sometimes Russian samovars use wood, but cones, although they burn more quickly, give off a pleasant aroma. It's normally fanned with a boot. If it is used like a pair of bellows, the water boils faster, but we only found a rubber one on board the vessel. The tea party very quickly attracted guests. People were soon singing in Polish, German, Finnish, English, and Russian. It touched the soul. Only at 5 am did the guests begin to go their separate ways, all in perfect harmony with each other.

The plan for the next day in Petrozavodsk was to buy products for the rest of the journey to Arkhangelsk, and to fill up the vessel with fuel and change the motor oil.

Surprisingly, the further north we went, the hotter it became. It was like a resort, everyone was out sunbathing and splashing around. Petrozavodsk seemed small and provincial, and reminded me somewhat of Smolensk. Unfortunately, the roads were very bad. But, on the other hand, very good and cordial taxi drivers. Our driver took us to the most convenient supermarket, let us use his discount card, and helped us haul the trolleys and load up. We left Petrozavodsk in the evening. Next stop — Kizhi.

Yesterday we visited Kizhi. This world-famous architectural ensemble is located on Kizhi Island in Lake Onega. Although the main church was being restored, we were still awestruck! A hot summer day, the smell of hay, seagulls over the lake, mist, clover in bloom... It’s hard to find the words — better just to look at the photos, and better still to visit this enchanting place. According to one legend, the Church of the Transfiguration was built with an ax (initially without any nails), which the master builder then threw into the lake. Therefore, local T-shirts proclaim, "This T-shirt was made without a single nail." Before departing the island, we arranged a small parade of sails. We soaked up the warmth of Lake Onega, and splashed and dived to our heart's content. In the afternoon, we survived an onslaught of midges and savage heat. A thunderstorm was hanging in the air above the lake as we approached Arkhangelsk.

Veronica Kuzenkova was born in Smolensk Oblast in a small town Gagarin, named after the first human in outer space. She was studying journalism in Saint Petersburg and worked in Moscow and Saint-Petersburg in PR and advertisement, always desiring to travel. Now she is a part of the regatta command, she writes in Russian about the Adventure Race 80dg on Facebook.
Have a look at the previous episode of the story

"Romanticism is lying on the deck, watching as sunset turns to dawn, listening to the strains of 'Moscow Nights,' reading Mayakovsky aloud." Credit: Rusarc.