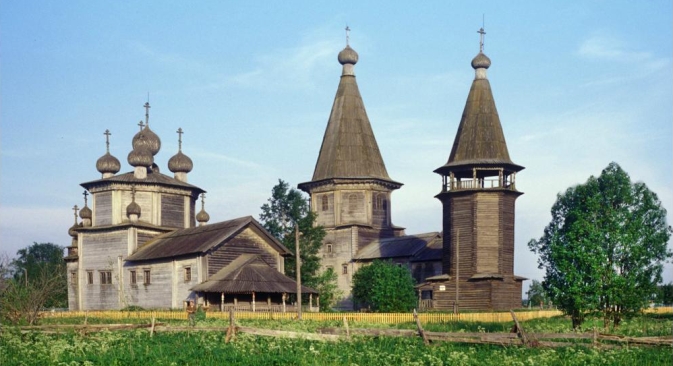 Lyadny is a place in Arkhangelsk Region on the North of Russia, where you can see monuments of wooden architecture and old Russian churches.

The Russian North is an inexhaustible source of traditional Russian art and architecture. Remarkable wooden churches as well as log houses that are themselves works of art still survive in the vast forested territory between the White Sea and Vologda.

Although each decade brings new losses, some of these log structures have been repaired and others - particularly churches - have been rebuilt, often for open-air museums. Yet a copy, however interesting, is not the same as the original.

To get to Kargopol take one of regular trains from Moscow or St. Petersburg following to Arkhangelsk or Severodvinsk, get off at Nyandoma station, then take a bus running to Kargopol 4 times daily (78km, 2 hours).

Fortunately, there are villages where monuments of wooden architecture still stand despite their vulnerability to the elements and human carelessness. One of the most remarkable sites is the village of Lyadiny, almost 25 miles from Kargopol.

Although its population varies slightly between summer and winter, this village of some 70 souls centers around an extraordinary architectural ensemble located on the territory of an ancient cemetery.

The Lyadiny ensemble consists of three parts: the Church of the Intercession with its soaring “tent tower” (completed by 1761); the nearby Church of the Epiphany (1793), crowned with a panoply of cupolas; and a large bell tower built in 1820. Such three-part ensembles of churches were once common in the northern farming communities, but most have long since disappeared—the villages as well as the churches.

The cluster of three derives from medieval towns such as Yaroslavl, which often had a large unheated “summer” church paired with a smaller church that could be heated for worship in the winter. At Lyadiny, the Church of the Intercession had an altar on the compact ground floor that could be used in the winter.

The construction of the Epiphany Church three decades later provided a larger space for worship during the long winters. In both summer and winter, sun or wind-blown snow, the form of the Intercession Church produces an unforgettable visual impact. Sheathed in darkened plank siding, the structure of stout pine logs ascends to a cupola and cross at its high peak.

On the interior, the ground level chapel encloses two massive log columns that support the floor of the main worship space above.

A narrow staircase ascends to this main space, and the first impression is one of clean whitewashed walls in the vestibule. The effect is magnified by the brightly colored icon screen and the painted ceiling, or "heaven", pitched over the worship space in an ingenious combination of art and architecture.

These "heavens" are a distinctive feature of northern Russian log churches. They have a polygonal form segmented by flat beams extending from the top of the walls to an elevated ring in the ceiling center. The beams incline upward and create a frame that is self-supporting between the walls and the ring where they meet at the center.

The painted panels are in the shape of narrow triangles and are laid upon the frame without fasteners. Tension and gravity keep the panels in place.

Tracking down traditional architecture in the Russian North

The Kargopol area has larger examples of such painted ceilings, in particular the one in the Epiphany Church at Oshevensk, but the “heaven” at Lyadiny is the brighter work of art. Its 12 long triangular panels depict the four Evangelists (Matthew, Mark, Luke and John) and seven of the eight archangels: Michael, Gabriel, Raphael, Uriel, Yegudiel, Varakhiel and Selafiel.

The main panel above the center of the icon screen depicts the Crucifixion, with Mary and other figures at the foot of the cross and Jerusalem in the background.

The archangels Michael and Gabriel are painted with an especially rich aura of beauty. Archangel Raphael is accompanied with the boy Tobias holding his fish-a Jewish legend from the apocryphal Book of Tobit and known in Renaissance painting. Within the central ring is a depiction of the Trinity: Father, Son and Holy Spirit.

The 12 seraphim at the tips of the triangles are painted with appealing female masks. This festive and personal artistic expression has been attributed to an icon painter active in Kargopol in the 1760s.

The adjacent Church of the Epiphany lost most of its interior art work during the Soviet period. The structure itself is now being repaired under the supervision of the Kargopol Museum, which has saved it from almost certain ruin. The ceiling of its semicircular porch is painted with a starry ceiling.

The two churches complement each other perfectly, with the lower silhouette of the “winter” Epiphany Church and its cupolas matched against the daring tower of the Intercession Church. The tall bell tower, with a pitched conical roof over the bell gallery, mediates between the two churches. The entire ensemble overlooks the cemetery crosses.

The Intercession Church has recently been consecrated for worship. But for many decades when the church ensemble was closed, there was another shrine, a tiny log chapel apparently dedicated to Saint George and closely guarded for worship in the hamlet of Kiseleva (part of Lyadiny).

It too had its painted ceiling, and the interior was draped with votive offerings of clothing, part of an age-old folk tradition. To be admitted to the chapel was a sign of great trust.

Many of the sturdy, beautifully crafted wooden houses in Lyadiny have been abandoned in a pattern of population loss long typical of the northern countryside. Life here is difficult, but with the help of the Orthodox Church and Kargopol Museum, the village survives. And it must, for the church ensemble at Lyadiny is one of Russia’s priceless treasures.

Update: On May 5, Orthodox Easter Sunday, the ensemble of churches at Lyadiny caught fire and several of the buildings burned to the ground. Firefighters managed to save the Church of the Epiphany, but were unable to preserve the Church of the Intercession of the Holy Virgin and the adjacent bell tower.

The fire reportedly began in the church's unique tent roof and spread through the rest of the structure.