Adventure Race Regatta: On the shores of Solovetsky Islands 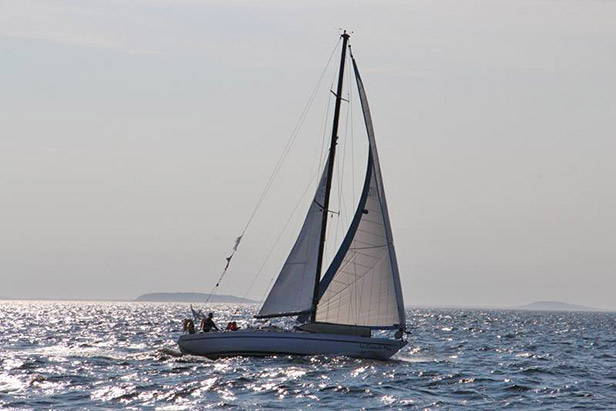 Our yacht Alter Ego on the shore. Credit: Rusarc.

The path to the White Sea: June 28

In the evening of June 28, we had a rest, got acquainted with some of the other crews, drank tea, and went round to see other participants in the regatta. For example, we visited the yacht Peter I, where the cook Katrin offered a tasty swap: a lemon, a jar of sprats in tomato sauce, and an invitation to tea and cake in exchange for some of the Alter Ego's stocks of flour. We gladly swapped supplies. As we move along the route, the boundaries between countries and nationalities are becoming increasingly blurred.
After a 4-hour nap, we continued to storm the sluice gates of Byelomorsk (Karelia), where in the suburbs we moored for the night. On June 29, we took an excursion to the Dutch yacht Anne Margaretha, the largest in the fleet, which resembles a cozy houseboat complete with library and bar. Our mooring in Byelomorsk turned out to be a heartfelt experience: the entire international team as one let off sky lanterns and admired the harsh landscapes of Russia's Northern Krai (border territory). The next morning, I managed to take a couple of shots of the streets of Byelomorsk.

At about 2pm, we passed through the 19th and final sluice gate and ended up in the not-so-white White Sea.

White Sea is an inland sea in the northern European part of Russia, part of the Arctic Ocean. Our first encounter with it was quite turbulent. Almost immediately after the 19th sluice gate, we were hit by a beast of a wave! The yacht swayed violently, churning some stomachs. Accustomed to the gentle meandering of a river cruise, we were not wholly prepared for this, including fastening items securely — so pan lids had to be caught in mid-air. We ourselves could barely stand upright.
The wind was in our favor, so we raised the sails, reaching a speed of 10 knots. Under the sails, the pitching was easier to tolerate, but there was a fairly strong list. Soon it became clear that our generator on the stern side was leaking fuel. We tried to fix it, but had to give up. 40 miles remained between us and the Solovetsky Islands, the largest archipelago in the White Sea, formed of six islands. The distance was covered in 6 hours, and we moored at the local wharf. The guys from our crew even risked a dip in the White Sea, but not for long — it was way too cold.

Our trip through the island. Credit: Rusarc.

Sonorous Solovki: July 1
There are places that have a distinct flavor, there are places that have a distinct smell, and there are places that a distinct sound. The Solovki (Solovetsky Islands) belong to the latter. Here, there is always something flapping in the wind, tapping, groaning, whistling. The wind is warm, but fierce. Even at 2am it is light enough to read or draw. Visible against the backdrop of the soft-pink sky are the outlines of a monastery, rare wooden houses, and wind-bent trees. All around the mooring site, the hulls of boats, cutters, and other vessels lie scattered, like the skeletons of whales washed ashore.
Our fleet saw in July 1 on Solovki. We devoted the whole day to a tour of the main island, which, aside from the unfathomable beauty of the landscape, is associated with some tragic moments in Russia's history. In Soviet times, Solovki was the site of one of the infamous labor camps, and the phrase "exile to Solovki" came to be used figuratively to mean "hard labor." Our sightseeing excursion began with the monastery and the museum, housed in one of the former camp barracks. Having read the memoirs of inmates and official documents and viewed photos of that epoch, we left the Solovki prison camp with heavy hearts. Inhumanity and logic-defying cruelty reigned across this vast land. Since the early 20th century, the islands were the site of a prison labor camp. Most of those held on Solovki during the political purges died of hunger and the harsh working conditions. Only now, little by little, are the painful memories of the horrors of these camps beginning to fade, allowing Solovki to be viewed without preconceptions: the atmosphere is palpably unique and conducive to wandering, gazing at the distant islands and bays, and relishing the austere northern beauty.

Since the early 20th century, the islands were the site of a prison labor camp. Credit: Rusarc.

In the evening, a small group of us set off for Zayatsky Island on board the yacht Briz. The island is located three miles off the main one. Another astonishing place. There is a chapel, built in 1702, and ancient labyrinths more than 3000 years old. Dwarf birches and huge boulders sit under a blanket of moss and lichen, while the bases of the trees are washed and bleached by the sea — and all this in the silvery light of the white night.
Awe-inspired, we returned to the wharf and looked in on Richard, the captain of the yacht Lady Dana 44. Once again, songs and chit-chat till the early hours.

In the afternoon of July 2, we left Solovki and headed for Sonostrov, our last stop before Arkhangelsk.

The crossing of the White Sea turned out to be quite a trek — almost 90 miles. Again there was a strong pitching, so we unfurled the sails. You get used to the rolling and pitching after a while, and begin to accept it. We even got in the habit of cooking in the galley on the "perambulating" stove with dishes scurrying across the deck.
Early in the morning, we moored on the island and went to the local mussels farm. There, delicious freshly caught mussels await their turn to be served with lemon juice and champagne. Near the farm we saw beautiful orange jellyfish, starfish, and all kinds of real fish. Even the northern seas are teeming with life!

Ahead lies more than a day's journey to Arkhangelsk. I can hardly believe that this section of the regatta is coming to an end. These past three weeks have been so intense that the impressions gained will last for a long, long time.

All day the locals came to catch a glimpse of the yachts. Credit: Rusarc.

End of the first section of the regatta: July 7

On July 7, the AR80 fleet arrived in Arkhangelsk (a large city, the center of Arkhangelsk Oblast and Primorsky Municipal District). It was quite hot in Arkhangelsk, lots of beautiful girls outside, people and cars moving along unhurriedly. The smooth regularity of northern folk, even in a port city, is striking in comparison with the usual mayhem in the capital.

All day the locals came to catch a glimpse of the yachts, and around 6 pm we experienced an invasion of children. Judging by their faces, the young sailors were very glad to have made the trip.

Some more crew members are due to fly back home. So far on the trip, we have greeted many a wonderful sunset and sunrise, and experienced some breathtaking moments. We've exchanged contacts and invitations to Gdansk, Riga, Helsinki, and even Rio de Janeiro.

In the meantime, the yachts are preparing to depart. Everyone is busily stocking up on water, fuel, and food, and sorting out important organizational matters. Today, I made it over to the Peter I, which tomorrow sets sail for Franz Josef Land in the Arctic under the command of Daniil Gavrilov. Our beloved Alter Ego with a new crew on board will head to Yamal, where crosses from Solovki will be erected on the remote Arctic islands near the peninsular.
It seems likely we’ll experience more communication problems, so the posts may arrive a bit late. But we're definitely going to keep blogging, now on board the Peter I. The distant 80th parallel awaits...

Veronica Kuzenkova was born in Smolensk Oblast in a small town Gagarin, named after the first human in outer space. She was studying journalism in Saint Petersburg and worked in Moscow and Saint-Petersburg in PR and advertisement, always desiring to travel. Now she is a part of the regatta command, she writes in Russian about the Adventure Race 80dg on Facebook.
Have a look at the previous episode of the story