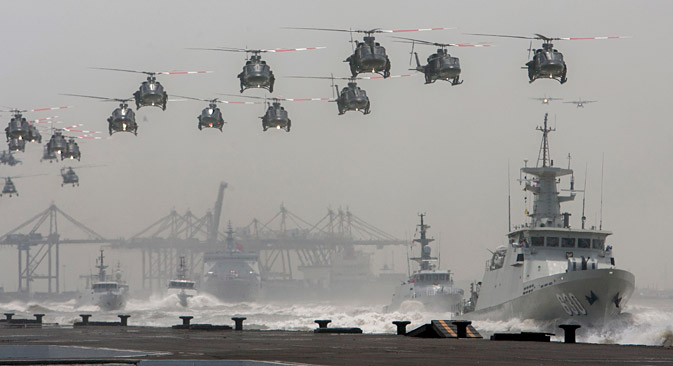 Indonesian air force helicopters fly over navy ships sailing in formation during the celebration of the 69th anniversary of the Indonesian armed forces.

AFP/East News
By supplying high-octane naval hardware to Indonesia, Russia is not only gaining a strategic foothold in the Asia-Pacific, it is also contributing significantly towards the archipelago’s long-term security.

In May 2014, when Indonesian President Joko Widodo took office, he reiterated his call to transform Indonesia into a maritime nation and invoked the Sanskrit slogan – Jalesveva Jayamah or Victorious on the Sea.

“We’ve turned our back on the seas, oceans, straits and bays for far too long,” he said. “It is time for us to Jalesveva Jayamahe, a motto upheld by our ancestors in the past.”

Jokowi, as the President is popularly known as, said that to develop Indonesia into a great nation Indonesia must possess the heart of Cakrawarti Samudera, another Sanskrit term meaning Emperor of the Seas.

Jokowi was not being unduly nationalistic. Indonesia faces a complex strategic environment both internally and externally. The dominant theme in its immediate East Asian vicinity is the tangle of territorial disputes that poses a direct threat to regional stability. At the same time, maritime piracy in Indonesian waters has been a constant worry for decades. According to some estimates, the country annually loses up to $3 billion from illegal logging and $8 billion from illegal fishing. Clearly, if there’s any country that needs a strong navy, it is Indonesia.

The new President is building maritime links with a number of East Asian as well as non-regional powers to strengthen the country’s defences. Russia is one of them. Growing Russia-Indonesia defence ties can more accurately be described as a return to the good old days.

Russian-Indonesian relations were at their peak in the late 1950s and early 1960s when Moscow provided the bulk of Indonesia’s military hardware, making the country’s defences forces one of the best equipped in East Asia.

The Indonesian Navy was thrilled with their new Whiskey-class submarines. The vessels were immediately put into action against the Dutch West Guinea in 1961-1962, and against Malaysia and British Commonwealth forces during Konfrontasi (Confrontation) in 1963-1966.

However, the honeymoon ended when Russia-Indonesia relations went into a freeze as the fiercely anti-communist Suharto allied himself with the US.

Moscow and Jakarta’s interests converged once again during the 2000s. Ingo Wandelt of Giessen University, Germany, writes in a paper titled ‘Between Economic and Security Interests: Russia’s Return To the Indonesian Archipelago: “The emerging Russian-Indonesian cooperation is a convenient case-study of how a resurgent former-Empire establishes footholds in the largest state of the archipelago that once was firmly in the western sphere of influence.”

He adds: “President Vladimir Putin’s one-day visit to Indonesia on September 6, 2007, signalled the return of an active Russia to Insular Southeast Asia’s largest state. The signing of eight bilateral agreements between the two governments in key fields of strategic cooperation throws some light on the strategic interests of both Russia and Indonesia in world politics.”

Putin reaffirmed historical ties in his address to his host, President Yudhoyono, when he referred to the early 1960s as “the golden age of Indonesian-Russian relations”. “The historical reference in a sense also reaffirmed what was once a major weapons buying relationship between the two countries, indicating that the relationship cannot be seen as purely economic,” Wandelt notes.

Indonesia walked into the 21st century feeling abandoned by its western ‘friends’. It felt betrayed when the U.S., Australia and most of the western world ganged up to pry East Timor from Indonesian control.

“Enter Russia with good quality offers, favourable repayment conditions and a clear statement of non-interference in internal affairs, and it is easy to understand the psychological impact Putin’s offer had on the Indonesian state and army leadership,” says Wandelt.

The Indonesian Navy will gain the most from the rapidly expanding Russia-Indonesia ties. With approximately 75,000 active personnel and more than 150 vessels in active service, Indonesia has the largest navy in South East Asia. What’s more, the Indonesian Navy is one of a few navies in the region backed by a substantial domestic defence industry, marine corps and armed with supersonic missiles and attack submarines.

But the inside story is that the Indonesian Navy is more rusted than ready. According to a report by Iis Gindarsah of the Jakarta-based Center for Strategic and International Studies, 59 per cent of the Indonesian Navy’s assets are over three decades old.

Indonesia’s biggest problem being finances, the Russian offer of soft loans is a way out of technological obsolescence. “Russia is ready to provide soft loans at cheap rates to buy defence equipment,” Tubagus Hasanuddin, vice-chairman of the Indonesian House of Representatives' Defence Commission said on September 1, 2015.

Hasanuddin was referring to the bilateral discussions over a $3 billion loan to support acquisition of Russian military equipment. Although details about the military equipment to be purchased through the deal were not revealed, Hasanuddin said the loan will be provided at preferential rates.

In Jakarta’s wish list are four Russian Kilo-class 636 submarines and two slightly smaller Lada-class submarines. The diesel-electric Kilos are among the quietest conventionally powered undersea boats in service anywhere and are capable of being equipped with advanced weaponry, including anti-ship and land-attack cruise missiles. These submarines would be among the most advanced conventional submarines in Southeast Asia.

Despite a $490 million cut in next year’s defence budget, the Indonesian Navy announced in September 2015 that it would procure Kilo-class submarines from Russia as part of the 2015-2019 strategic planning. “There are many kinds of Kilo-class submarines. We have yet to decide which type we will purchase,” says navy spokesperson Commander Muhammad Zainuddin.

The Indonesian Navy reportedly wants to buy up to 12 boats by 2024 so the potential for Russia is huge here. “So far, we have two submarines and an additional three Chang Bogo-class submarines that are still under construction in South Korea. So we still need at least seven more submarines,” he said, adding that the seven submarines would probably be Kilo-class vessels.

The Russian Kilos are only the latest of recent buys. In November 2010, Indonesia’s marine corps received 17 amphibious tanks BMP-3F from Russia.

Currently, Indonesia's Ahmad Yani class frigates are fitted with the supersonic Yakhont missile that can destroy ships up to 300 km away. The Yakhont, which is the export version of the P800 Oniks missile, skims the waves at Mach 2.5 (twice the speed of sound), making its detection extremely difficult.

In 2011 the Indonesian Navy frigate KRI Oswald Siahaan test-fired a Yakhont during a naval exercise in the Indian Ocean. The missile took just six minutes to travel 250 km to score a direct hit on the target. At a time when most Southeast Asian navies had – and with the exception of Vietnam, still have – only subsonic cruise missiles, the Yakhont launch marked a significant capability breakthrough in the region.

On the drawing board

Even as Russia and Indonesia tie down defence deals piecemeal, bigger plans lie ahead, with Moscow offering to expand defence industry collaboration. According to Janes, the plan is centred on the "development of defence offset schemes" that encompass technology transfers, joint production in Indonesia of components and structures, and the establishment of maintenance, repair, and overhaul service centres in the country.

According to the Indonesian Ministry of Defence, Russian Ambassador Mikhail Galuzin communicated the offer to Indonesian Defence Minister Ryamizard Ryacudu on January 15, 2015. This follows a similar proposal extended to Jokowi by Putin at the Asia-Pacific Economic Cooperation meetings in China in late 2014.

Indonesia’s strategic conundrum is that its leadership continues to view internal security as more important than the high-stakes manoeuvres happening in its neighbourhood. Its defence spending is currently just 0.8 per cent of GDP, which is one of the lowest in the region. That Moscow has managed to bag these not insignificant defence deals within this context is an indicator of three key developments.

One, it is a measure of the impact of Russian diplomacy in the region. Secondly, there is confidence in Indonesia that Russian weapons can do the job –and well. (As events have proved in Syria, they are indeed doing a fine job.) And finally, unlike the US – which imposed sanctions on the Indonesian military during the East Timor crisis – Russia can be relied upon to supply spares and replenish losses if war breaks out.

Clearly, the Russian way of engagement through security agreements is a win-win for everyone involved. Even as new weapons contracts keep the Russian defence sector humming and the connections they build are helping Russia gain a strategic foothold in the world’s most vibrant economic region, they are contributing significantly towards Indonesia’s long-term security.