The story of the ‘Ural’, the USSR’s most popular motorbike everywhere… except Russia! 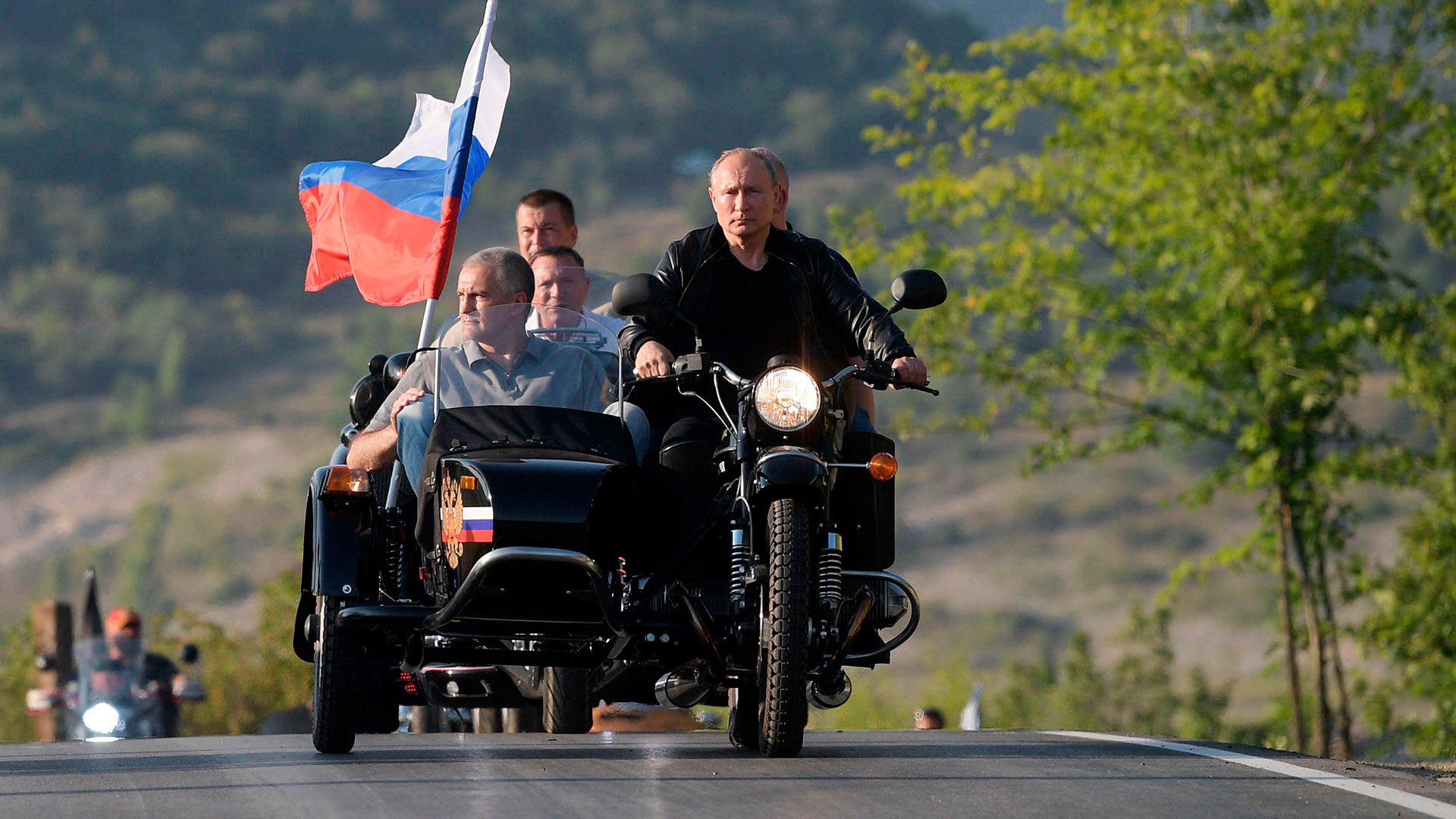 August 10, 2019. Russian President Vladimir Putin participates in the international bike show in Sevastopol at the wheel of a motorcycle" Ural " with a sidecar. On the left - the Head of the Republic of Crimea, Chairman of the Council of Ministers of the Republic of Kazakhstan Sergey Aksenov

Alexey Druzhinin/Sputnik
A small factory one and a half kilometers (about one mile) outside of Moscow produces just five to six bikes with sidecars per day, whose riders include celebrities like Brad Pitt and Steven Tyler. Oddly enough, these bikes sell terribly in Russia. We’ll tell you how that happened…

On the road somewhere in California, a shiny, red motorcycle speeds by as if it were straight out of a classic romance movie. Riding it is a big man with a beard and, next to him, in the sidecar, is Gracie the dog. She’s not wearing a helmet, but she’s got her doggles on. Gracie’s already eight years old, so she’s experienced enough to sit up straight in her seat without fidgeting.

“Hey Gracie, wanna fly?” the man asks and, for just a few seconds, he tips the motorcycle to one side, riding on just the bike’s wheels. At first, Gracie’s a bit anxious, but within a few seconds, she seems happy once again.

This is how eight-year-old Australian Cattle Dog Gracie spends her rides on a Ural – the most famous Russian motorcycle in the world - except for Russia!

In Crisis on a Military Bike

The residents of Irbit, a small city in Sverdlovsk Oblast, founded in 1631, always had something to keep busy. Practically right from its founding, trade fairs would go through the town. In the 1930s, Irbit evolved from a trade town to an industrial city. At first, a diatomite plant was built to produce bricks and later, a machine manufacturing plant to extract peat was added.

During the Great Patriotic War, it was to Irbit that the motorcycle factory, which had previously been in Moscow, was evacuated. It was located on the territory of the brewery.

“The first military unit arrived on November 21, 1942, and in February, the first unit left Irbit on motorcycles,” recounted Alexander Bulanov, director of the Irbit State Motorcycle Museum, in an interview with TASS. In the years of the war in Irbit, more than 9,000 motorcycles were produced. Initially, they were used by the military and the model was named ‘M-72’. The new name ‘Ural’, in honor of the vast Russian geographic region, was only coined in 1962; however, this was the name that the bikes became known as in the Soviet Union and abroad. 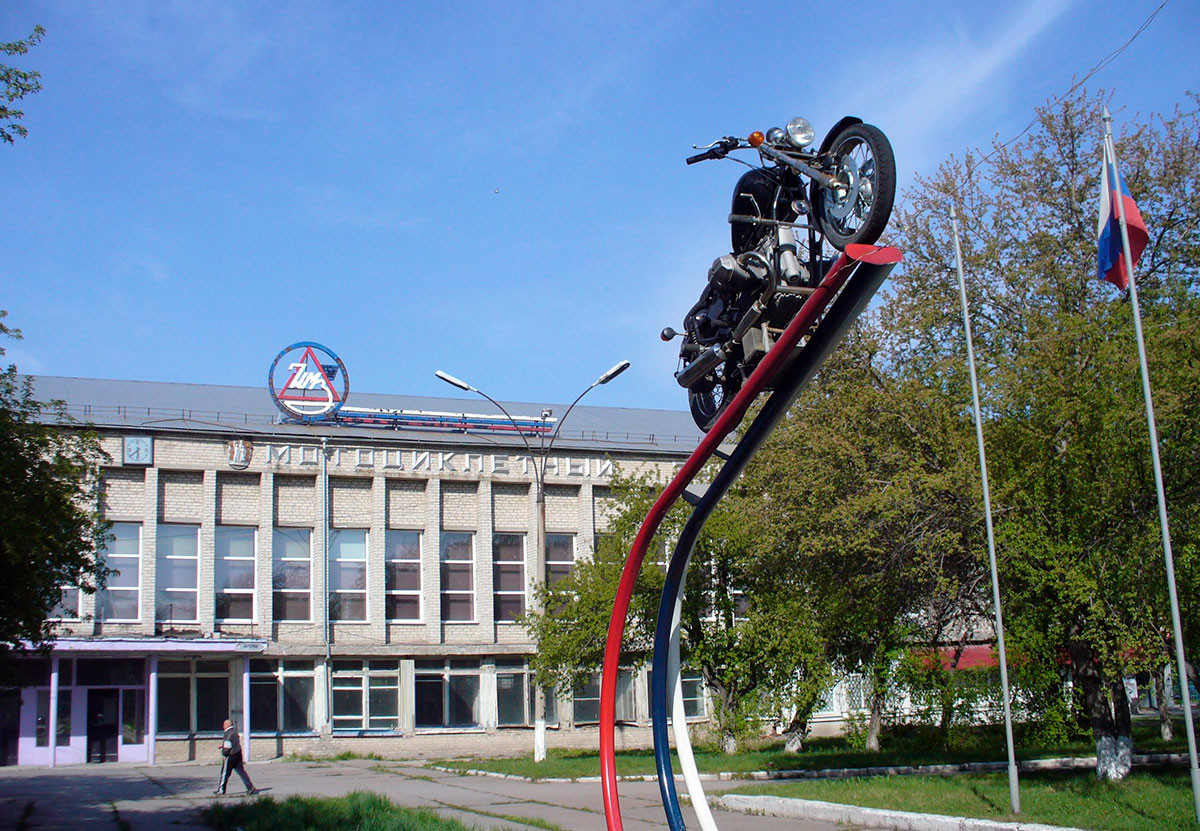 Production of Ural motorcycles at the Irbit Motorcycle Factory

Before the 1990s, the factory successfully produced 130,000 motorcycles per year for Soviet citizens, with around 10,000 people working there. After the dissolution of the Soviet Union, a crisis occurred in the factory. Its name changed several times, but at the beginning of the 21st century, the factory fell into bankruptcy.

Kakha (Kakha Bendukidze, the former factory owner, became it’s proprietor in 1998, - editor’s note.) decided to sell the factory, but the only buyers willing to buy it turned out to be the then senior managers of the factory. “Me and my colleagues Vadim Tryapichkin and Dimitri Lebedinski,” said Ilya Khait, one of the factory’s current joint owners, in an interview with Afisha Daily.

By 2015, the new owners adjusted production and in that same year, they had already managed to produce 1,755 motorcycles; however, they were all shipped for export - to Japan, USA, Europe, Canada and Australia.

“We immediately realized that the Russian market wasn’t promising for these kinds of [bikes] and we wanted to compete with global brands. But, for that, we had to nearly change our production process entirely. The current Ural [models] don’t have any features of the old motorcycle. It’s all about the demands the foreign markets make,” explained Khait. 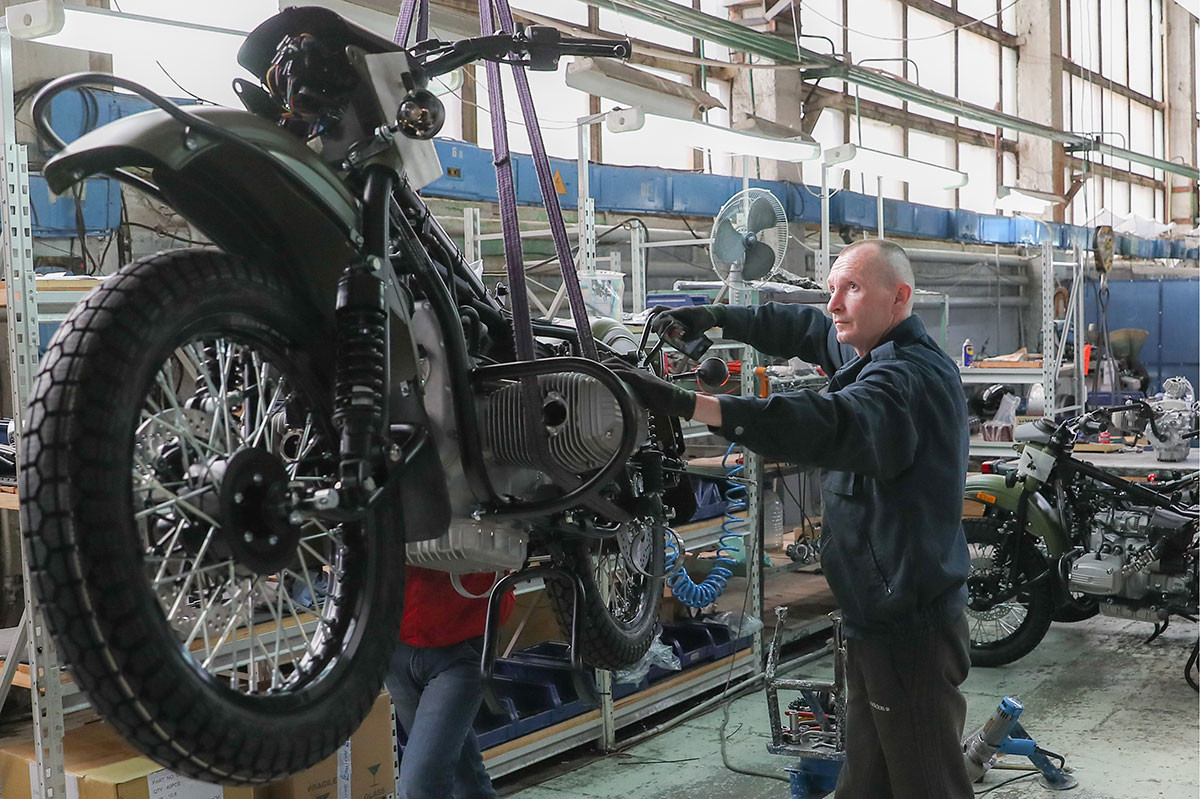 Workers manufacture the body parts, chassis and engines at the factory, according to Vladimir Kurmachev, executive director of the Irbit Motorcycle Factory (IMZ). Brakes, gearboxes and other components have to be bought from abroad. 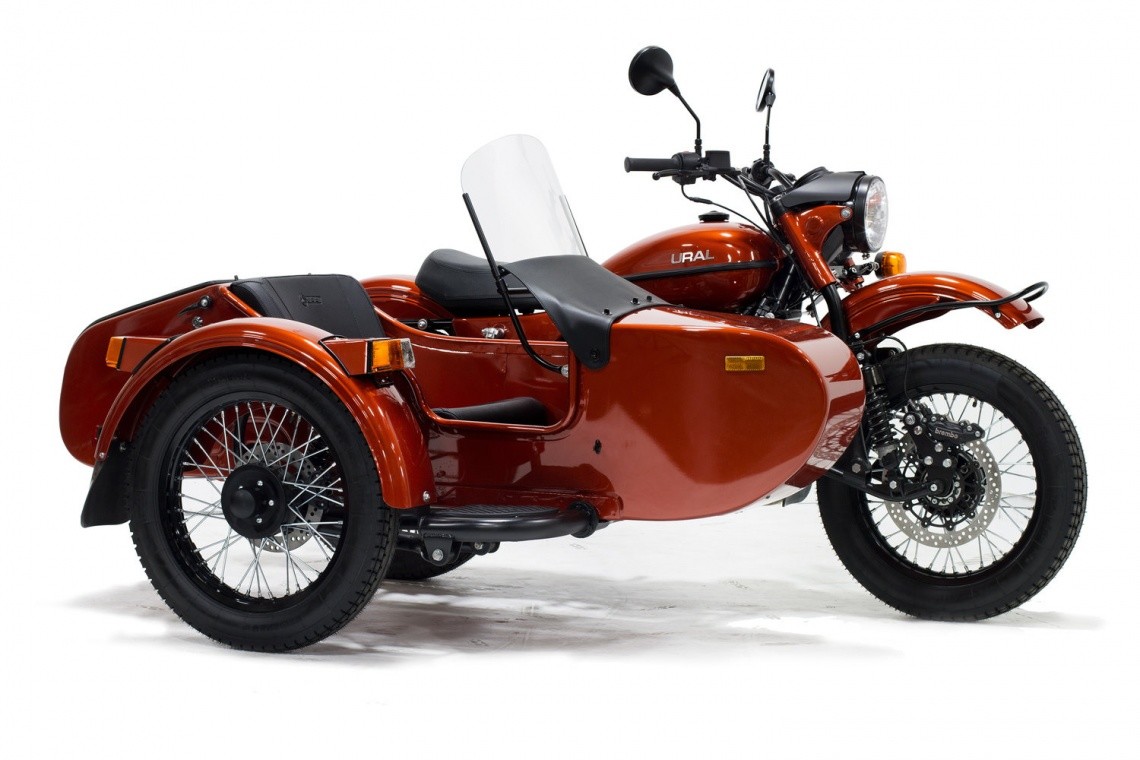 The manufacturing volume of Ural motorcycles has also decreased significantly. Today, just 150 people work in the factory assembling about five to six tailored-made bikes per day.

The factory produces two classic bike models: the ‘Ural CT’ and ‘Gear Up’. Also, every year, the company releases limited collections of their bikes. For example, Ural motorcycles in the color of Lake Baikal and the desert, or motorcycles inspired by the nature of Yamal Peninsula in Russia’s Far East. 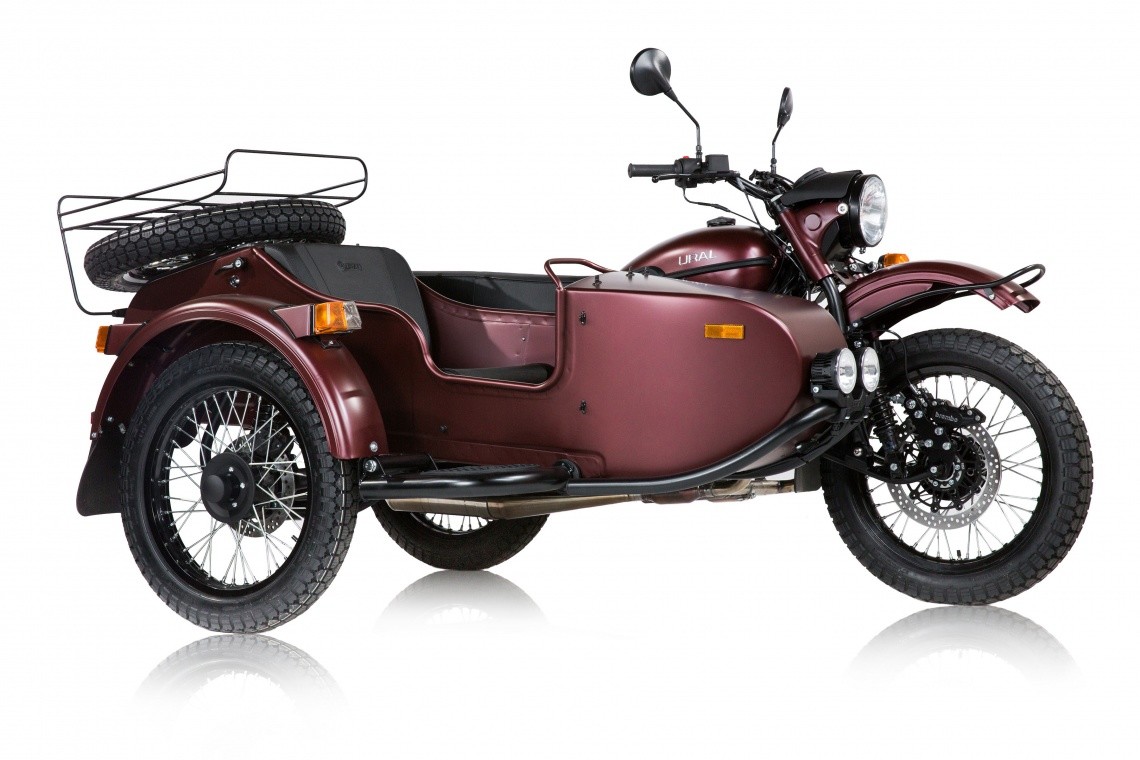 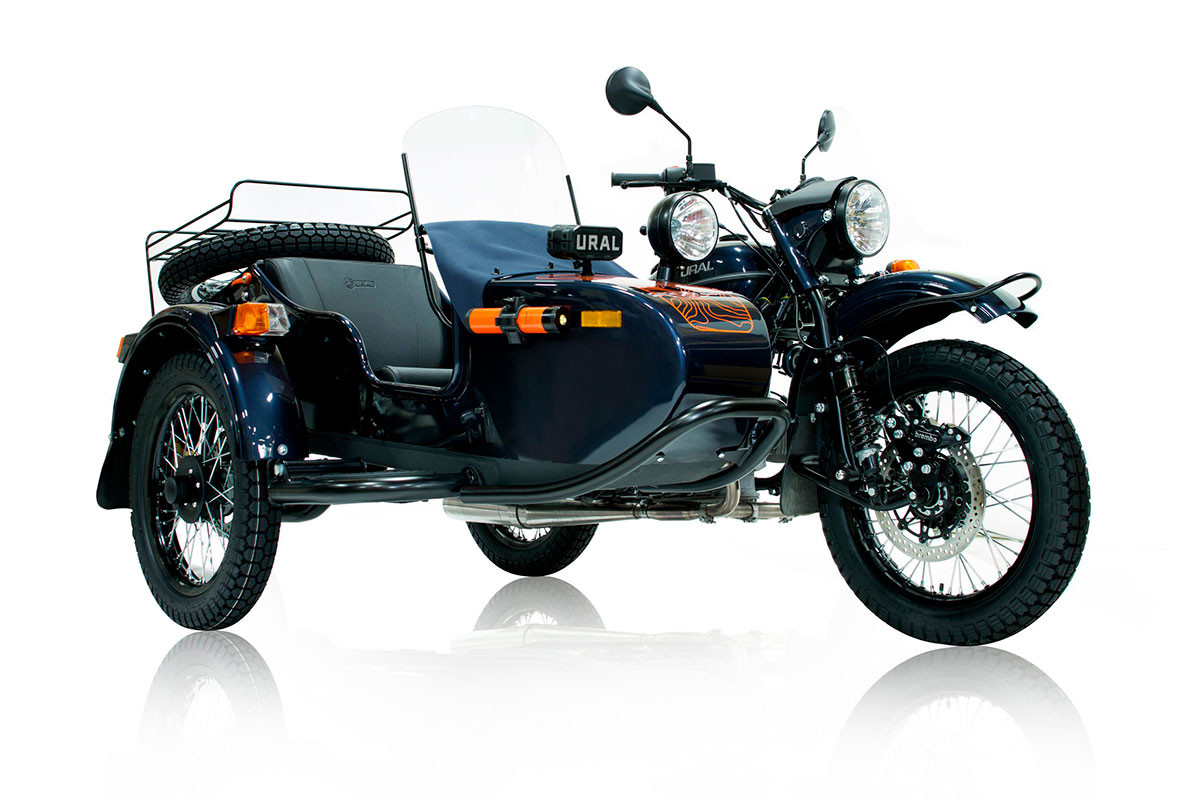 Ural Baikal LE, released in a limited edition in 2017

The ‘Gear Up’ has almost the same features, with the exception of its wheel size. Regardless, it’s considered the flagship model, as it is the only all-wheel drive bike in the world. Per customer request, the transmission can be attached to the sidecar during assembly, making the motorcycle the ideal choice for off-roading.

Ural has a total of four dealers in Russia - and around 50 in the USA. In the 2010s, paparazzi noticed actor Brad Pitt and Aerosmith soloist Steven Tyler riding Urals.

CONGRATULATIONS TO @Adam_Fn_Green & @TheJoeLynch ON THEIR 2ND ANNUAL 48-HOUR LIVE @moviecrypt MARATHON TO SAVE THE YORKIES!!! HELP THEM SAVE DOGS LIVES HERE: https://t.co/SAj0xYL9Pspic.twitter.com/dW36HnsciI

According to Vladimir Kurmachev, actor Ewan McGregor, who played in Star Wars, has two Ural motorcycles, one with a sidecar and one without.

But, in his opinion, the reason for the Russian bikes’ popularity is its unusual design, which shall never change under any circumstances.

“The Milan Motorcycle Show, which takes place once every two years… if you were to remove the motorcycle labels, the untrained eye would hardly be able to determine what model is which. But a Ural is unmistakable,” said Kurmachev in an interview with TV channel Rossiya 24 back in 2017.

Ilya Khait, joint owner of the factory, believes the Ural is popular abroad, due to its sidecar, which can be detached from the bike.

“The median age of our bike owners currently is 50-53. Typically, they are experienced bikers, who have discovered such a unique means of transportation: a motorcycle with a sidecar. A Ural [motorcycle] differs in its drivers’ and passengers’ relationship. It’s a ride you share with someone,” illustrates Khait.

In Russia, the bike is unpopular due to its high cost and also because many fans of the earlier Soviet models are against any modifications, thinks Khait.

Meanwhile, Ural is slightly adapting to all needs, according to Khait. In Paris and Barcelona, tourist excursions take place on Urals. Tourists transport their surfboards on them and one coffee shop in St. Petersburg ordered a bike as a “mobile espresso stand” to sell coffee straight from the motorcycle.

The bike is capable of taking on mountain passes, canyons and deserts, not to mention the usual off-roads and snow-covered roads. Its cross-country ability in any condition is yet another reason why customers in America are ready to pay prices starting at $10,000, says Gene Langford, one of the first Ural dealers in the USA in the 1980s.

“…[T]he Urals can be driven in winter and summer, including off-road. The sidecar can be used as a trunk, or you can put children or pets there. Thus, Urals turn out to be the perfect transport for adventure and even one that is rarely seen,” Gene told USA Really.