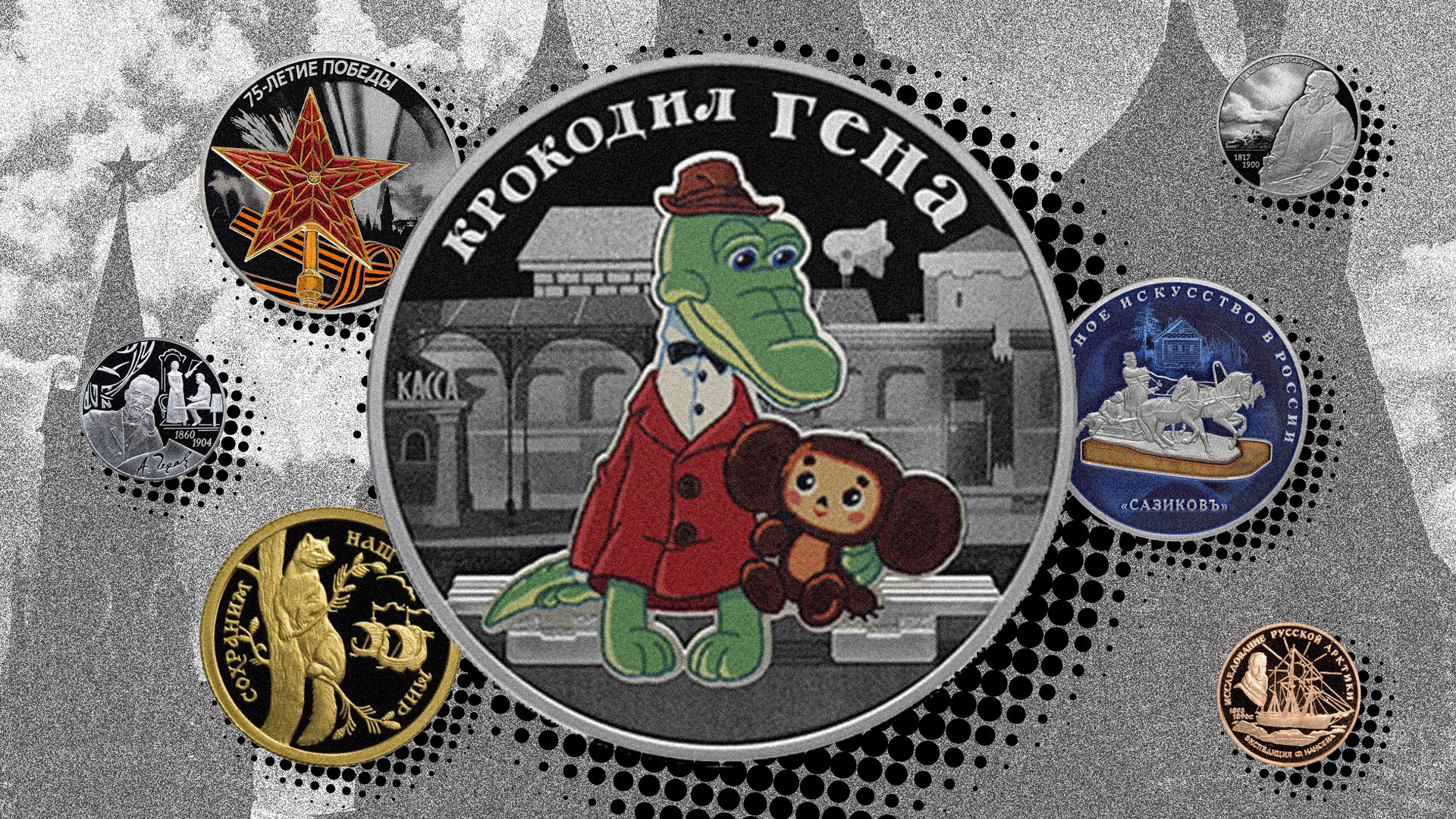 1. The ‘Save our world’ series is dedicated to endangered Russian animal species. This gold coin with a 50-ruble ($0,67) nominal value has a diameter of 2.26 centimeters and depicts a sable in a tree and two merchant rowing boats. The sable was practically extinct a century ago, due to a wide use of its fur, but, nowadays, its numbers have grown again. 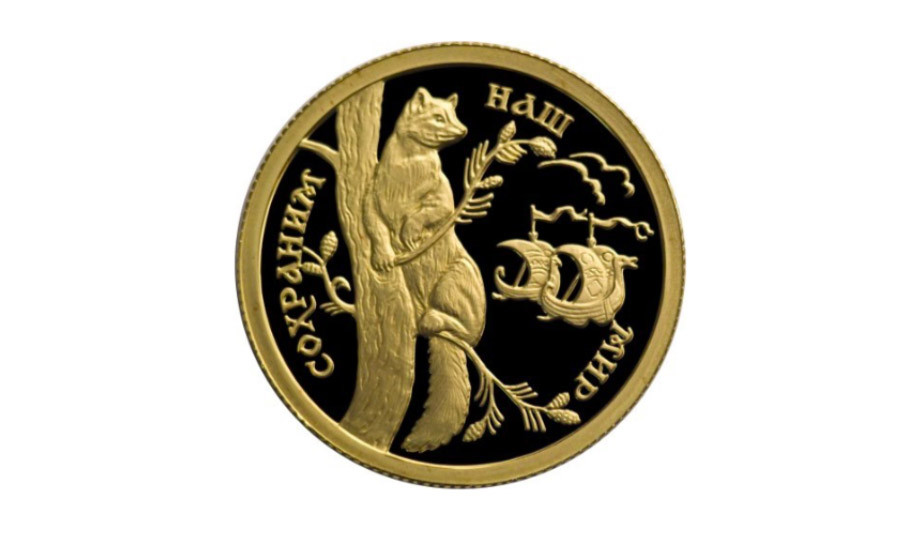 2. The ‘The explorers of Russian Arctic’ series was created to commemorate heroic expeditions and their leaders. This 2.26-centimeter gold coin, with a nominal value of 50 rubles, depicts Fridtjof Nansen and his steam-powered ship, the ‘Fram’. Nansen navigated in the Arctic in 1893-1896 and risked his life with a co-explorer, when they tried to reach the North Pole skiing and lost their way. 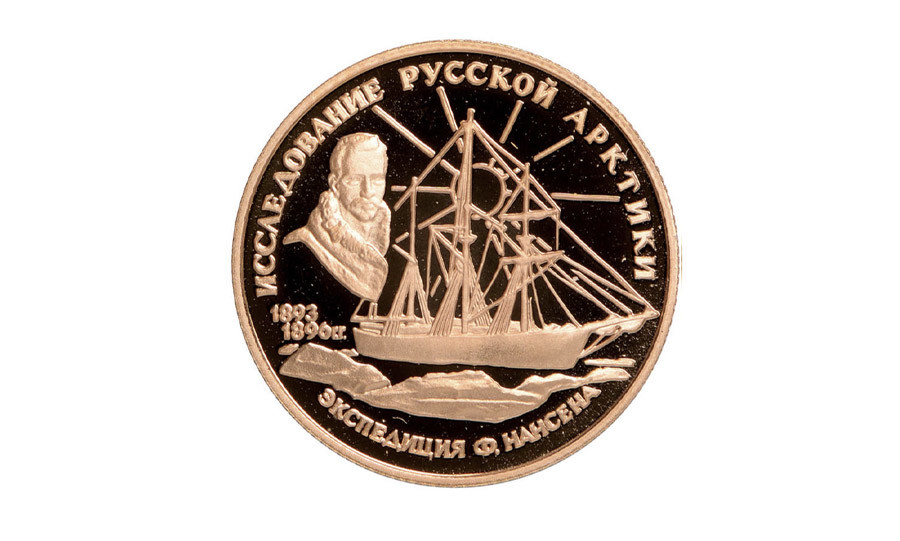 3. The ‘Russian ballet’ series honors the best masterpieces. This 100-ruble gold coin (approx. $1.34) has a diameter of 3 centimeters and depicts the Prince of ‘Shchelkunchik’ (“The Nutcracker”). The two-act ballet based on a story by E. T. A. Hoffman was introduced in 1892 and society’s reaction wasn’t too impressed at first, but nowadays, this is a very popular show strongly associated with the New Year. 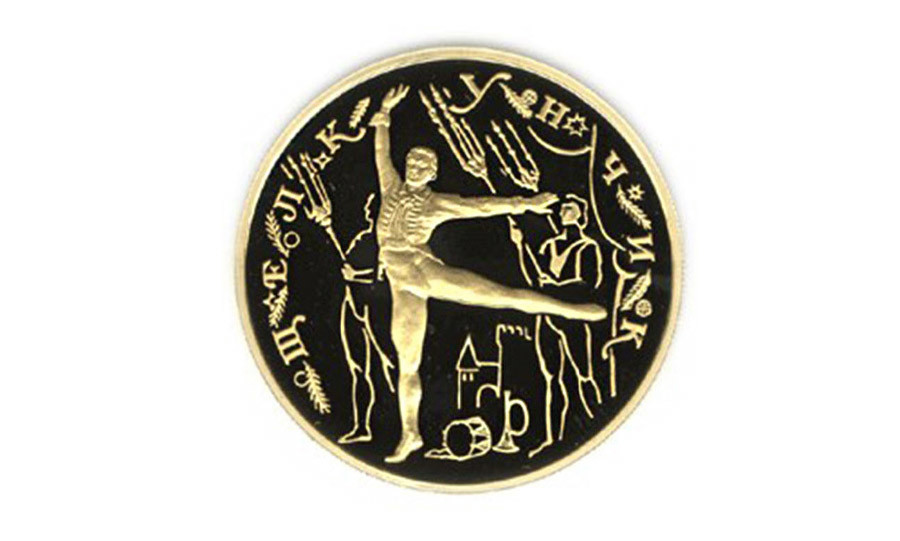 4. The ‘The window to Europe’ series is consacred to the contribution of Peter the Great to the development of Russia. This 13-centimeter silver coin with the nominal value of 200 rubles (approx. $2.68) depicts the deeds of the first Russian emperor. The middle shows the ‘Bronze horseman’” monument; on the top left, there are ships in front of the Admiralty building in St. Petersburg for the fleet establishment; on the top right, there is Russia’s coat of arms in front of the Twelve Collegia Building for state reforms; on the bottom right, there are war attributes in front of Shlisselburg fortress for military victories and, finally, on the bottom left, there are books and instruments in front of the Kunstkamera building for introduction of European sciences to Russia. 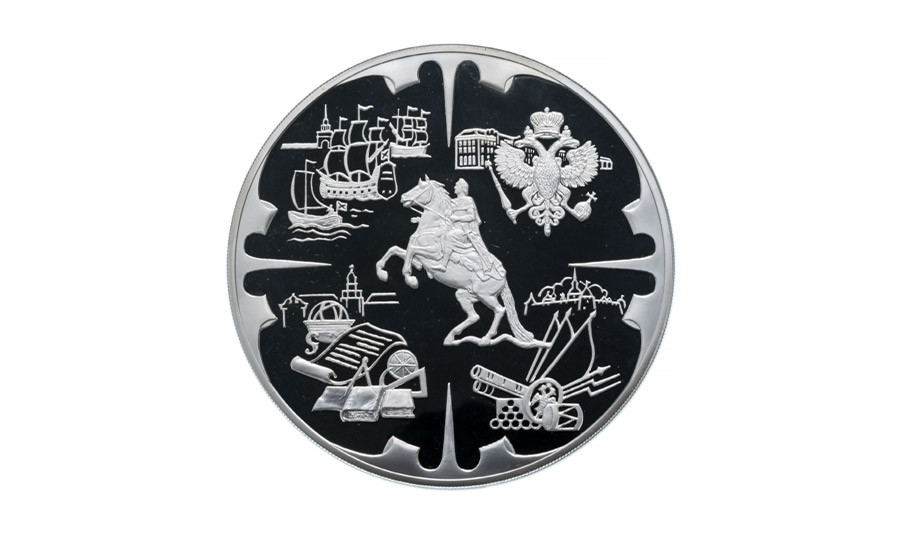 5. The series ‘150th anniversary of the birth of A. P. Chekhov’ series commemorates the creations of the great writer. This 3-ruble (approx. $0.04) silver coin with a diameter of 3.9 centimeters depicts Chekhov himself, his signature, a stylized picture of a gull, a man with a woman and a rifle on the wall. Chekhov was a great playwright known for the creation of the “Chekhov’s rifle” principle: he wrote that if there is a rifle in the scene, it must definitely be fired, meaning that any element shown must have an impact on the plot. 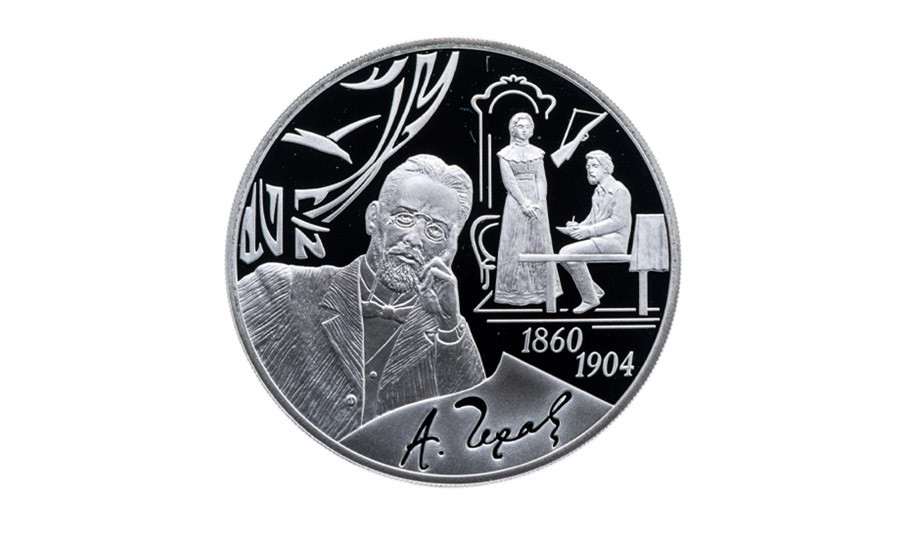 6. The ‘Architectural masterpieces of Russia’ series honors the most beautiful buildings and their creators. This 6-centimeter silver coin with a nominal value of 25 rubles (approx. $0.34) depicts Auguste de Montferrand and his magnificent St. Isaac’s Cathedral, surrounded by the quarters of St. Petersburg. The construction of the cathedral lasted for 40 years and, nowadays, this highly decorated building is one of the symbols of St. Petersburg. 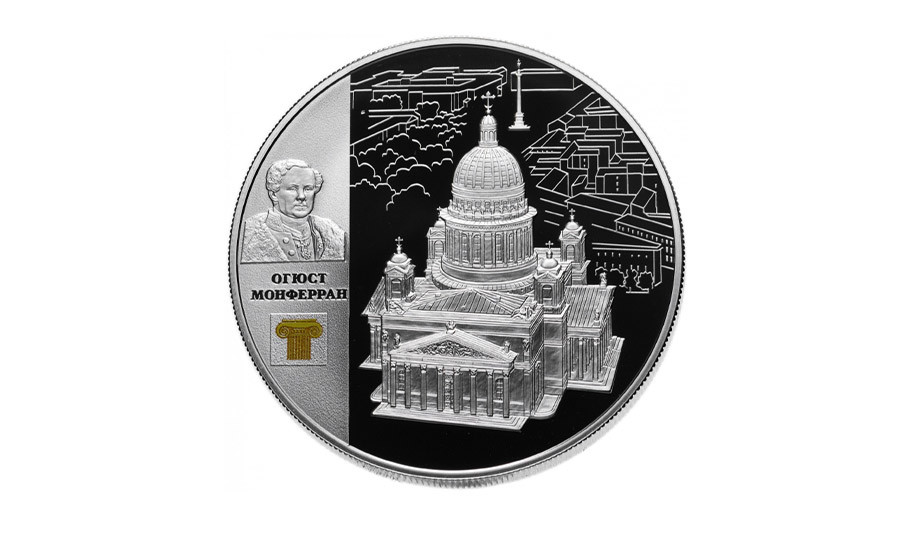 7. The ‘Jewellery art in Russia’ series is consacred to Russian jewellery companies and their works. This 25-ruble silver coin with a diameter of 6 centimeters depicts a table sculpture called ‘Troika’ (“The Trio of horses”) by the ‘Sazikov’ company. The company was founded in 1810 by jeweller Pavel Sazikov and became famous for its Russian-styled goods, eventually becoming a supplier of the Emperor’s court in 1837. 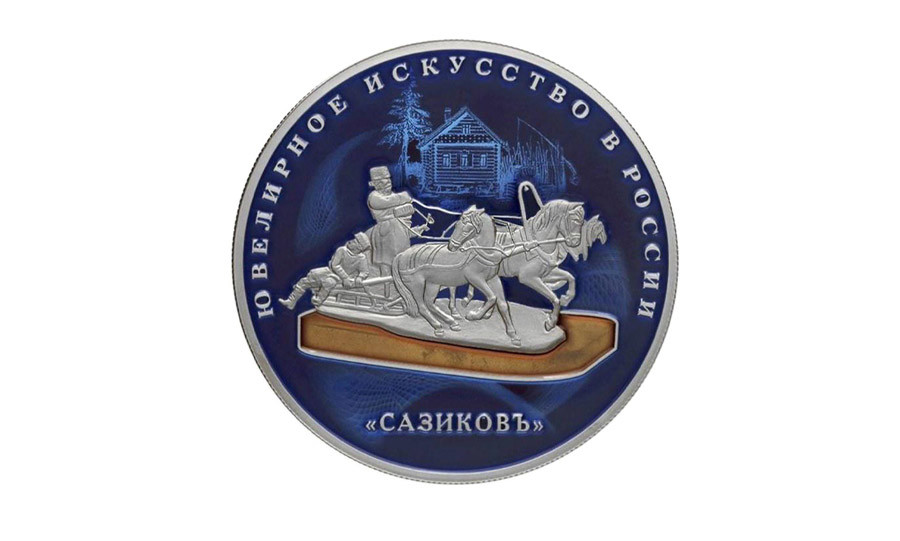 8. The ‘Outstanding personalities of Russia’ series is dedicated to great Russian people of different professions. This 3.3 centimeter silver coin with a nominal value of 2 rubles (approx. $0.027) depicts a painter Ivan Aivazovsky and a fragment of his ‘Devyaty val’ (“The Ninth Wave”). Ivan Aivazovsky (1817-1900) is considered the main marine painter of the 19th century. 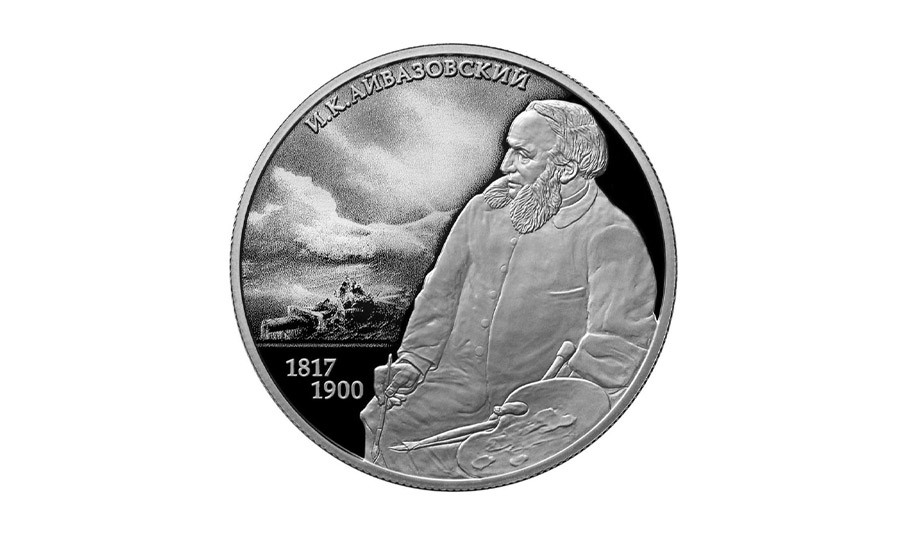 ‘Outstanding personalities of Russia’ series, A painter I. K. Aivazovsky, to the 200th anniversary of birth, 2017

9. The ‘75th anniversary of the victory of the Soviet folk in the Great Patriotic war in 1941-1945’ series commemorates the deeds of the Soviet people who made the victory real. This 3.9-centimeter silver coin with a nominal value of 3 rubles depicts a red star of the Moscow Kremlin and a medal ribbon with colored and golden elements in front of the view of Moscow with fireworks. Victory Day is annually celebrated in Russia on May 9. 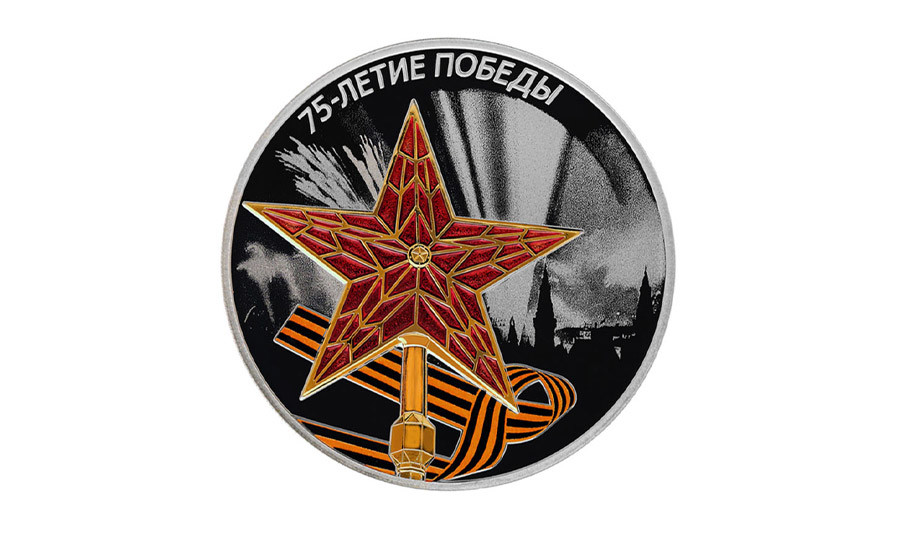 10. The ‘Russian (Soviet) animated cartoons’ series is consacred to popular Russian animation characters. This 3.9-centimeter silver coin with a nominal value of 3 rubles depicts Gena the Crocodile and Cheburashka in colors in front of a railway station. Gena the Crocodile and other characters first appeared in 1966 in the book of the same name by Eduard Uspensky, and then several popular, timeless cartoons were made. 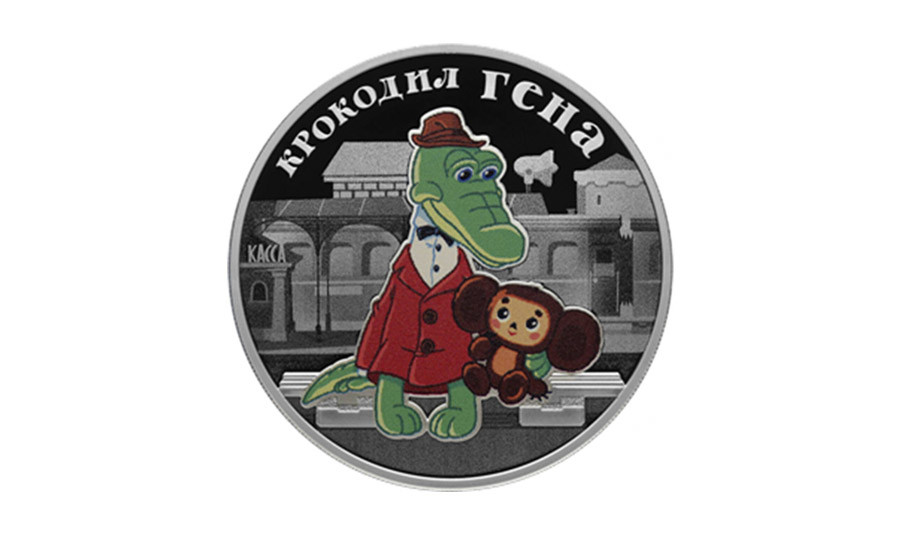