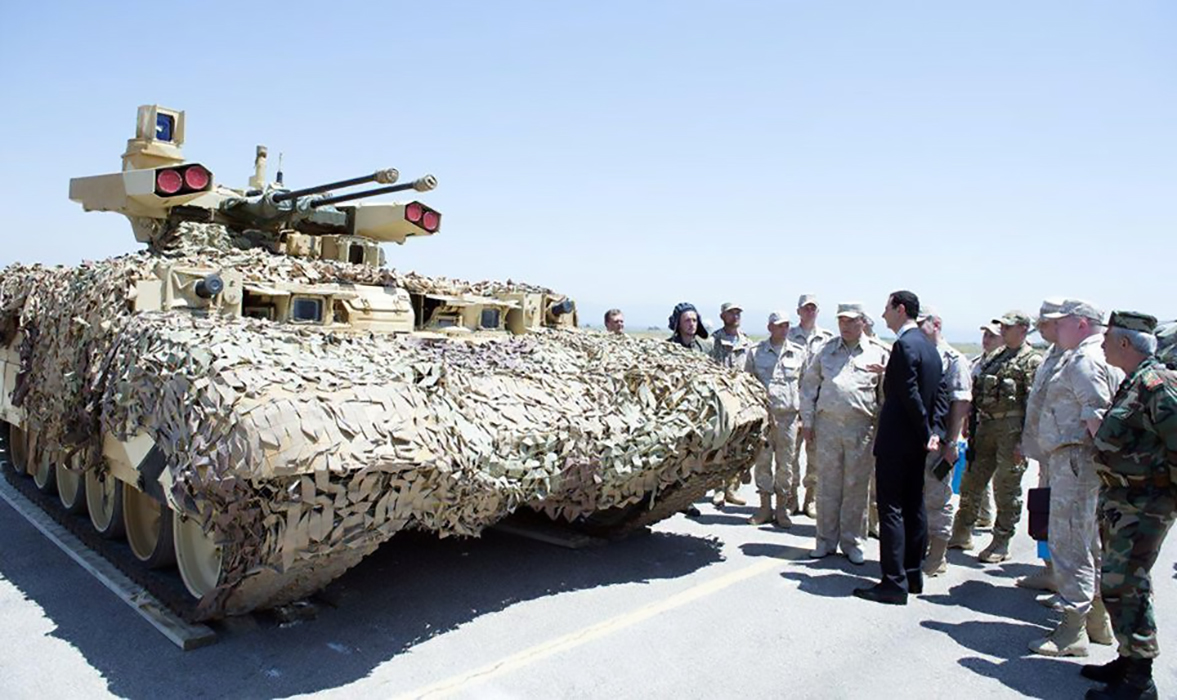 Syria's President Bashar al-Assad stands in front of the BMPT-72 at the Russian air base at Hmeymim on June 27, 2017. Source: Reuters

The BMPT-72 fighting vehicle is undergoing tests in Syria. It will most likely go into mass production and join the Russian Armed Forces in the near future.

On June 27, Syrian President Bashar al-Assad visited the Khmeimim Russian base, where he was shown the newest Russian BMPT-72 (aka Terminator-2) armored fighting vehicle.

The vehicle was invented to protect tanks from rocket attacks in an urban environment.

The Russian Ministry of Defense recently sent a single combat BMPT-72 to Syria to test the vehicle and decide its future.

Details of the Terminator-2’s mission in Syria are unclear. It may participate both in guarding Khmeimim, and in battles in Syrian towns and cities.

The tragic experience of the Chechen wars demonstrated the necessity to protect tanks that operate in urban conditions. An enemy soldier with a rocket launcher in a city street could blow up a tank that has to negotiate narrow streets. Tanks are also vulnerable in rugged terrain.

On Jan. 1, 1995, a column of the 131st Separate Motor Rifle Brigade was almost totally destroyed during an attack on the Chechen capital Grozny. 22 tanks and 45 armored personnel carriers were lost due to firing by Chechen militants while the column entered the city.

To avoid such tragedies, the Russian military command had started to use the ZSU-23-4 Shilka self-propelled anti-aircraft weapon to protect tanks. These weapons have limitations. The anti-aircraft weapons cannot operate in close contact with the enemy on the ground and they lack the proper systems to detect ground targets. 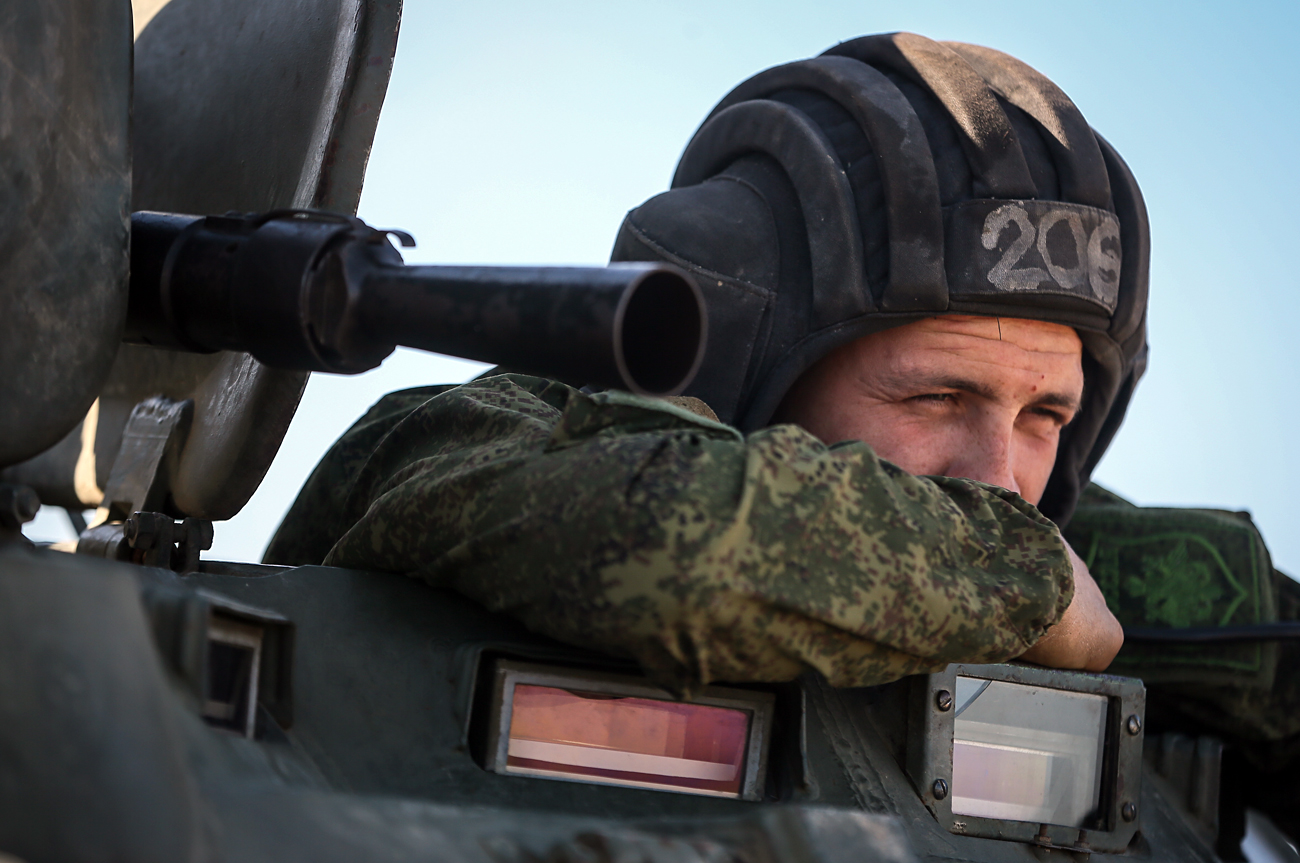 It’s because of the limitations of Shilka that the first Terminator was invented. The vehicle was designed by Russian company Uralvagonzavod in the late 1990s. It was built using the chassis of the T-90 main battle tank, and was armed with 2A42 automatic cannons, AGS-17 automatic grenade launchers, a PKTM machine gun, and four launchers for ATAKA anti-tank guided missiles.

The main aim of the vehicle was to clear the battlefield before main battle tanks attack. If the tank couldn’t take down a soldier hiding in a building or a trench with a rocket launcher, the Terminator did it easily.

Still the first Terminator was not warmly welcomed by the Russian Ministry of Defense. The vehicle had several major disadvantages.

First of all, the Russian military high command was not pleased with the fact that the Terminator had too many crewmembers. The vehicle was operated by five people.

In additions, launchers for ATAKA missiles had no protection and its fire control system was not good enough.

The main disadvantage of the first Terminator was its high cost, since using the T-90 ‘s chassis for an armored fighting vehicle of this type turned out to be prohibitively expensive.

The new machine, BMPT-72 (aka Terminator-2), was built to fix both the major and minor disadvantages of its predecessor. It succeeded by having a mechanism to protect the ATAKA missiles launchers, a new engine, and an advanced fire control system. 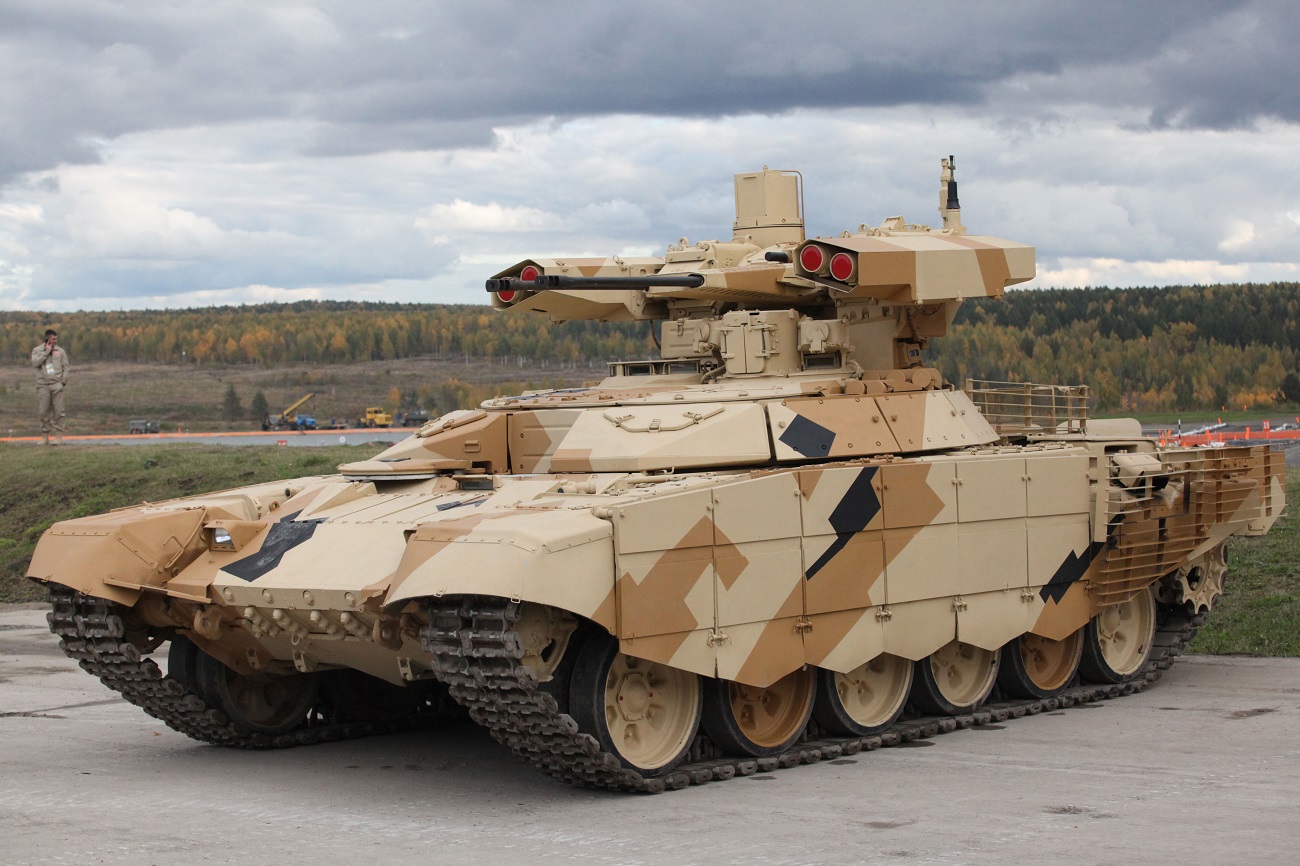 But the main change was in the replacement of the expensive T-90 chasses with those of the obsolete T-72 tanks. This made the Terminator-2 more affordable.

Removing the AGS-17 automatic launchers helped reduce  the number of crewmembers to three.

Essentially, the new Terminator is easier to operate, lighter, and cheaper than the first one, but not without it minus points, Vadim Kozyulin, a professor of military sciences, told RBTH.

Without automatic launchers, the BMPT-72 has significantly less firepower. It can fire at only one target at a time, while the first Terminator could take down three targets.

The prototype of the vehicle was introduced at Russia Arms Expo-2013. Kazakhstan, which is one of the main operators of the T-72 tanks, may become the first importer of the Terminator-2.

The Terminator-2 may be exported to CSTO countries, but in Russia, the vehicle has still not been inducted into the armed forces.

Terminator as a part of the new armed forces doctrine

By the mass establishment of tank divisions, the Russian military leadership has declared that the Russian Armed Forces are capable of going on the offensive, with tank units playing a major role.

The tank as a strike force should lead combat in tough urban environments. This is where the Terminator-2 vehicles could help. It’s highly likely that the BMPT-72s will be inducted en masse in the Russian Armed Forces, Litovkin added.