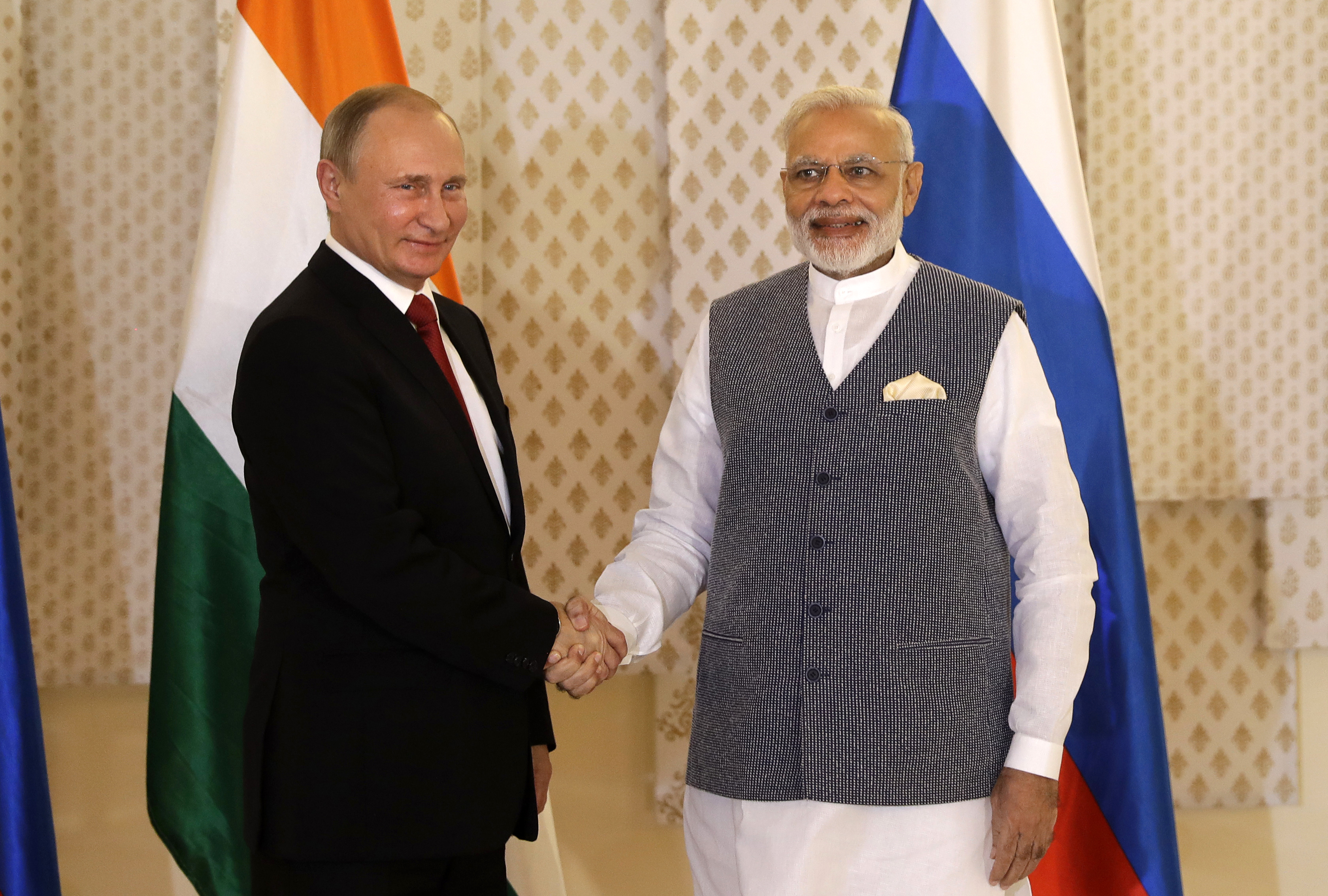 Indian Prime Minister Narendra Modi shakes hand with Russian President Vladimir Putin prior to their annual bilateral meeting, on the sidelines of the BRICS summit, in Goa, 2016.

AP
Ties between Russia and India, both bilaterally and within the context of multilateral formats like the G-20, BRICS, Shanghai Cooperation Organisation and RIC (Russia, India, China), formed the cornerstone of the foreign policies of both countries in 2016. The economics of the engagement is also significant, with Russia still facing Western sanctions and India in a phase of uncertainty after demonetization of its high value currency.

Relations between Russia and India peaked for the year in October, when Russian President Vladimir Putin met Indian Prime Minister Narendra Modi for their annual summit, in the verdant surroundings of Goa. Not only were the traditional pillars of defence, nuclear energy, space and energy security addressed, emphasis was placed on getting economic ties to reach their potential.

In a ‘Partnership for Global Peace and Stability, they “pledged to pursue new opportunities to take the economic ties to unprecedented heights, achieve sustainable development, promote peace and security at home and around the world, strengthen inclusive and transparent global governance, and provide global leadership on issues of shared interest.”

In its just unveiled ‘Foreign Policy Concept’ for 2016, Russia says it “is committed to further strengthening its special privileged partnership with the Republic of India based on the convergence of foreign policy priorities, historical friendship and deep mutual trust, as well as enhancing mutually beneficial bilateral ties in all areas, primarily in trade and economy, with a focus on implementing long-term cooperation programmes approved by the two countries.”

A total of 16 agreements signed after Putin and Modi held discussions saw a range of pending deals come to fruition, in the fields of defence cooperation, like an inter-governmental agreement on the purchase of the S-400 ‘Triumf’ missile defence system, energy security, nuclear issues, cyber security and anti-terrorist cooperation.

Another key issue that came up during the 17th India - Russia summit was the celebration of 2017 in a manner befitting the 70th anniversary of diplomatic relations being established between the two countries. A series of events have already been launched to foreground the anniversary.

Modi highlighted the significance of the issue, saying, “As we approach the 70th anniversary of the establishment of our diplomatic ties next year, India and Russia are celebrating and building on the achievements of our past. We are working to model a partnership that befits our common ambition and meets our shared goals for the twenty-first (21st) century.”

Both Putin and Modi approved a range of events that depicted the “width and depth of multi-faceted relations that the two countries have, spanning diverse fields including political, defence, energy, trade, economy, finance, investment, culture, education, think-tanks, science and technology, sports, youth, tourism, people-to-people exchanges,” the Indian Ministry of External Affairs (MEA) said in a statement.

Relations with Russia are a key pillar of India's foreign policy. Under the special and privileged partnership the two countries share, several institutionalized dialogue mechanisms operate at both political and official levels to ensure regular interaction and follow up on cooperation activities.

However, the issue of Russia’s increasing ties with Pakistan has the potential to strain bilateral relations. After the first ever joint military exercises, the first ever foreign office consultations were also held between them earlier this month.

Pankaj Saran, India’s Ambassador to Russia cautioned that there could be “problems” ahead in bilateral relations between Russia and India if Moscow continued to strengthen its defence ties with Islamabad.

While broadly in agreement on jointly opposing terrorism in all its aspects, differing views on engaging the Taliban in Afghanistan also has the potential to create stress in the bilateral relationship, particularly with presidential envoy Zamir Kabulov’s emphasis that Pakistan must be a part of the solution.

The defence deals reached at the summit included the purchase of five S-400 missile systems (known as the ‘Growler’ in NATO nomenclature), joint production of Ka-226T (‘Kamov’) helicopters, and the acquisition and joint production of four state of the art Admiral Grigorovich-class (Project 11356) guided-missile stealth frigates.
The ‘Kamov’ helicopter deal is a key deal, being seen as a huge boost for the government's flagship ‘Make in India’ initiative. India will initially import and then manufacture Russian Kamov Ka-226 T light utility helicopters.
The two countries also agreed to conduct an annual military conference.

The Defence Minister-level India-Russia Inter-Governmental Commission for Military Technical Cooperation (IRIGC-MTC) met in New Delhi on October 26 to follow up on the significant decisions in defence cooperation announced at the Goa bilateral Summit.

An important focus of discussions at IRIGC-MTC was on after-sales product support of Russian platforms and equipment. A combination of approaches is now being implemented to address it effectively, including long-term indents, life cycle contracts, collaboration in setting up workshops in India and creating manufacturing capacities in India for spares, components and sub-assemblies.

India, a leading global importer of defence hardware, is currently undergoing a $100-billion upgrade of its mostly Soviet-era military equipment.

The Indian media reported in early-November that the Defence Acquisitions Council (DAC), chaired by Defence Minister Parrikar, has approved acquisition by the Indian Army of 464 Russian T-90MS tanks, the latest version of the T-90, which is already being manufactured in India under licence and with a progressive degree of indigenization. Valued at over US$ 2 billion and reported to be the world’s largest tank contract in the last 15 years, it is to be implemented as a Make in India project.

India-Russia relations reached a new landmark in nuclear power cooperation in 2016, with President Putin and PM Modi jointly dedicating Unit 1 of the Kudankulam nuclear power project to the Indian nation. Units 2 to 6 are also on the anvil.

Earlier this year, a clutch of deals potentially worth over $4 billion when all are completed, were signed for acquiring a stake in Russian oil major Rosneft's most promising oilfields in Siberia, adding commercial depth to the Soviet-era strategic ties between India and Russia.

IndianOil, Oil India and a unit of BPCL agreed to buy 29.9% in Tas-Yuryakh oilfield in east Siberia for $1.3 billion. The consortium also signed heads of agreement for taking a 24% stake in Vankor field, also in east Siberia, for over $2 billion and pay another $180 million as its share of future capex. ONGC Videsh, the overseas arm of ONGC, signed a MoU to raise its total stake in Vankor to 26% for by acquiring additional equity at a cost of $925 million.

After the Goa summit, a deal was signed to pave the way for a group led by Rosneft to acquire a stake India's Essar Oil refinery, for a massive 5.5 billion dollars.

The two leaders also witnessed the signing of Memorandums of Understanding (MoUs) on developing smart cities, transport logistics, shipbuilding and railways in Andhra Pradesh, and cooperation in oil and gas among others.

A key feature of the enhanced economic engagement between the countries this year has been the increased involvement of the Regions of Russia and the states of India with each other. Increasingly they are directly engaging each other and not waiting only for the Federal governments to power their ties.

The North South International Transport Corridor is likely to soon become functional, raising the prospects for reduced transportation time and costs between the two countries, and providing a much required boost to bilateral economic ties.