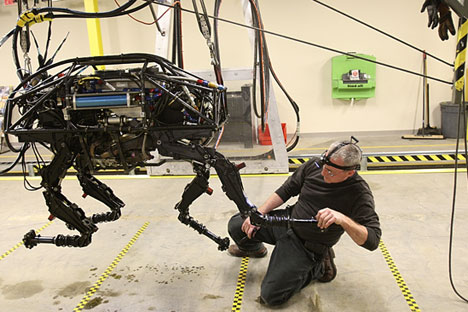 Android technology will develop the draft of the biomorphic robot base.

Getty Images
Russia has begun work on an analogue of Boston Dynamics’ biomorphic robot (owned by Google). The order to develop R&D for two types of platforms was placed by JSC Scientific Research Institute Signal, a part of ‘Rostech’.

Just one company filed an application to participate in the competition, an NGO called Android technology, and it won the contract for R&D work on a biomorphic robot, getting almost 80 million rubles in funding. The NGO had become widely known for its robot SAR-401, nicknamed ‘The Combat Avatar’ by the media. The robot was introduced in early 2015 to Russian President Vladimir Putin.

According to the tender documentation, the NGO this time will do the lion's share of work for JSC on the design of the two “basic platforms for moving the mobile biomorphic robots, including on challenging surfaces.” The first platform will weigh 400 kg (BPMBR400), the second, up to 120 kg (BPMBR100).

The project has been assigned the code “Lynx-BP”. The platforms must have a “4-lever driving force”, which means that the future robot, like the Boston Dynamics' “beasties” will walk on four “legs”.

Android technology will develop the draft of the biomorphic robot base. In addition to hardware, the base will include an on-board information and control system, instruments of machine vision and data communications, as well as navigation and motion control systems (making the robot, for example, follow the operational commander).

The payload of BPMBR400 and BPMBR100 will be reconnaissance devices, platforms for transport of armaments and ammunition, devices for the detection of minefields and even weapons. BPMBR400 will be also able to evacuate the dead and wounded from battlefields.

Like the Boston Dynamics' products, Russian robots will be able to move on challenging surfaces, including sand 10 cm deep, grass up to one metre high (for BPMBR100 - up to 50 cm), snow and puddles 40 cms deep (for BPMBR100 - 20 cms), glaciers, mountainous terrain and so on. Both products are expected to develop speeds up to 15 kmph on flat terrain, and 10 kmph on uneven terrain.

This is where the Russian robots outpace the Americans. The declared speed of the Legged Squad Support System (LS3) being developed for the US military is 11 kmph on flat terrain, while its prototype, BigDog can reach a speed of only 6.5 kmph.

BPMBR will be able to switch from transport mode o the battle mode in one minute, and from the battle mode to transport mode in 2 minutes. The power plant BPMBR uses the internal combustion engine, an electric generator and batteries. Both platforms should be power self-sufficient for 24 hours and the battery will allow it to move for 30 minutes. Robotic platforms need considerable electronic protection.

Russia to get biomorphic robots after 2020

The BPMBR400 model will be built and tested by November 2016. In the second phase, from December 2016 to July 2017, design documentation for production of the prototypes will be developed. In August 2017, beginning preliminary testing of robots is scheduled, expected to last till the end of 2018. Public testing of the ready model is likely between January and June 2019.

The robot will go into service only after 2020. Boston Dynamics has been following the BigDog and their robots for the 10 years it took to develop. It doesn't appear as though Russian companies will be any faster.