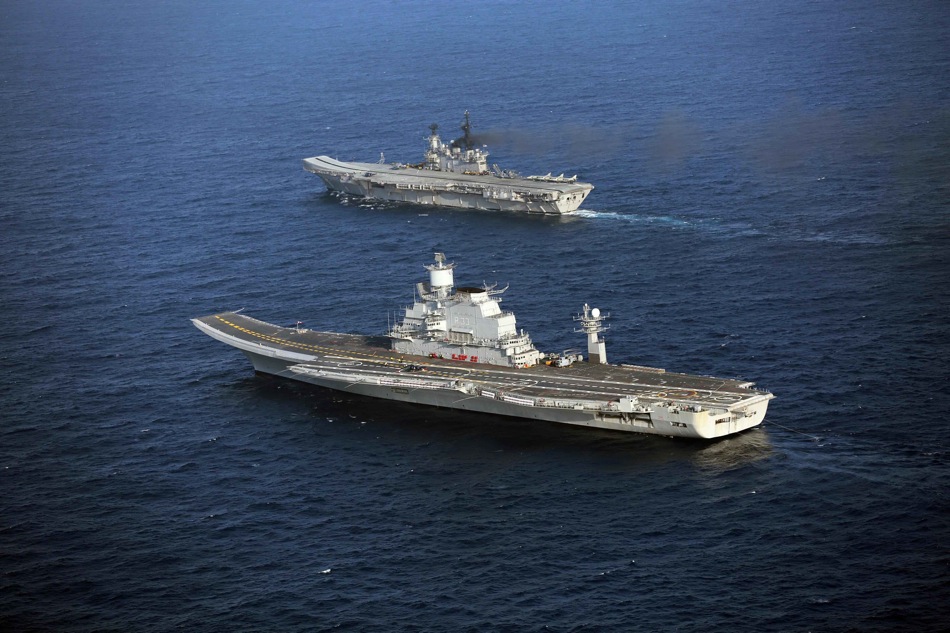 Courtesy: Indian Navy
Defence cooperation between India and Russia not only provides political warmth and strategic depth to bilateral relations, but also provides most of the commercial content to ties.

Being at the crossroads of politics, diplomacy and commerce, Russia-India defence cooperation has always occupied a special place in the entire structure of bilateral relations.

On the one hand, the supply of Russian arms to India is a clear indicator of intensive political cooperation between the two countries, as well as a high level of trust between New Delhi and Moscow.

On the other hand, against the backdrop of rather modest economic cooperation, trade in military goods fills the relations of strategic partnership with real commercial content.

In the 1990s, Indian orders gave a powerful impetus to the innovative development of the Russian defence industry. India was one of the first to shift to a new paradigm of demand on the arms market when non-standard mass production systems were ordered, and arms were made to order according to individual customer requirements. The Indian armed forces were able to articulate very high, but realistic requests.

While projects such as the Su-30MKI fighters, carrier-based MiG-29K fighters, Talwar-class frigates were being executed, Indian military requirements stretched to the limit the design and technological capabilities of Russian developers and manufacturers. However, they did not exceed their capabilities, thereby creating weapons systems required by India within a reasonable time.

Indian buyers at the time ran high, but reasonable technical risks. As a result, the Indian and then the Russian Armed Forces received first-class weapons systems, which still remain modern today. No other Russian arms importer has had such a positive innovation impact.

China, for example, which was the leading buyer of Russian weapons till 2007, usually bought either the standard system, or the systems, that had passed conservative modernization. The only segment where Chinese demand was most concentrated was modern solutions in air defence, for which China has become the first customer for the C-300PMU-2 and is likely to be the first foreign operator of the C-400.

Russia is a significant source of weapons and technologies for India. Russia has always been willing to transfer to India not just finished products, but production technologies. The re-assignment of licences and organization of production of defence products of Soviet and Russian design is not a recent phenomenon, but a practice that began in the 1970s, when licenced production of India’s MiG-21s was organized.

In this sense, Russia has been implementing the ‘Make in India’ a policy for nearly half a century. It is not altruism on Russia’s side. The fundamental basis of Moscow’s attitude to the question of the transfer of military technology to India is the phenomenal complementarity of the Russian and Indian military-political interests.

India’s maximum economic, industrial, technological and military strengthening meets Russia's national interests. In addition, Russia has been cooperating with India not only in the segment of conventional tactical weapons, but also in sub-strategic and strategic systems. This cooperation is of vital importance for India’s development of military capabilities and its transformation into a global military player.

The classic examples of this are, of course, the leasing of the Soviet and Russian multipurpose nuclear submarines and the construction for the Indian Navy of the ‘Vikramaditya’ aircraft carrier. This kind of cooperation can and should develop.

The preservation of a large group of non-nuclear submarines is a closed chapter for the Indian Navy. When economic opportunities allow, military needs and geography dictate the need to establish a nuclear submarine fleet. After all, attack nuclear submarines and aircraft carriers, along with the weaponry provide dominance in the seas, while the conventional submarine is rather a solution for defensive tasks. There is no doubt that Russia will provide India with all the necessary assistance in the building of nuclear submarines.

Finally, unlike some other major players in the Indian defence products market, Russia has consistently limited itself in the deployment of large-scale military-technical cooperation with Pakistan. Neither the US, supplying Pakistan with the modern and effective F-16 fighter, which is the strike core of the Pakistan Air Force, nor France, whose submarines form the basis of Pakistan's submarine fleet, take into account the concerns of India's rising military power vis-à-vis this artificial and unstable state.

Russia's policy in relation to the supply of arms to Pakistan looks especially contrasting against this background. Islamabad is hugely interested in Russian weapons, including the cutting-edge systems such as the Su-35 fighter. However, one can say with confidence that Russia will never agree to the transfer of arms to Pakistan, which could disrupt the existing balance of forces in the region.

What are the prospects for Russian-Indian military-technical cooperation? Most likely, it is an increase in the number and the scale of joint projects on the basis of risk-sharing.

Several projects of this kind are already being implemented. Among them are the staggeringly successful BrahMos project, the unsuccessful MTA, and the recently launched FGFA. The Su-30MKI program is very close to such projects.

At the moment, however, both countries face the task of carrying out the second generation joint projects, which were initially completed with the harmonized requirements of the armies of both countries. Financed on a parity basis, those were bought by both the Indian and Russian military, and are jointly marketed in the third countries.

It is about creating a common element of the Russian-Indian military products market, and it is a far more ambitious goal than the ‘Make in India’ policy, in the paradigm that Russia and India have been operating for five decades.

We can say with certainty that the most promising model is the Make in India 2.0, under which India is not a recipient of technology, but an equal partner in building new knowledge, competencies and products.

Ruslan Pukhov is head of the Centre for Analysis of Strategies and Technologies, a member of the Public Council under the Ministry of Defence