What languages are spoken in Russia (besides Russian)? 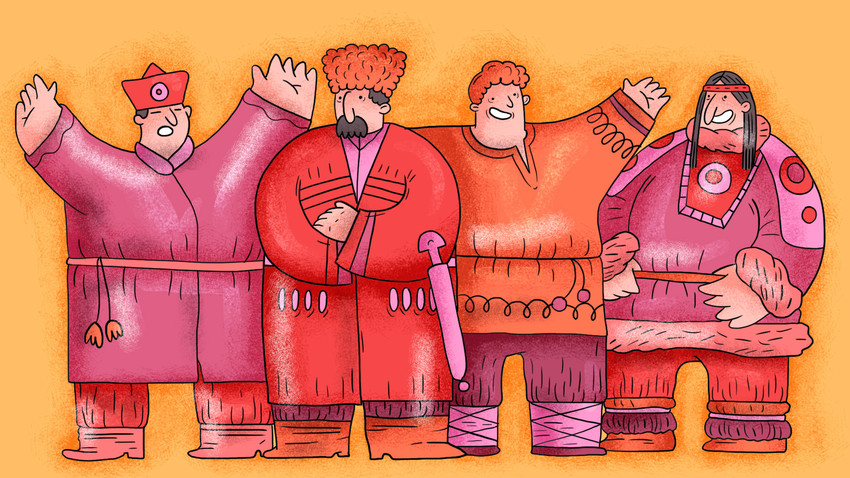 There are a lot of treasures in the Russian lands - linguistically speaking too.

Natalya Nosova
We won’t list all the dozens of different languages spoken in this enormous and diverse country, but let’s just say that Russian is nowhere near as hard to learn as some of these unique and lesser-known languages.

Think Russian is hard to learn? On the one hand, you’re right. Otherworldly letters like “ы” and “щ,” six cases, at least two versions of every verb depending on the aspect – all of this seems really challenging and confusing.

On the other hand, compared to some of the other languages spoken in Russia, Russian itself is a real piece of cake. If you think six cases is hard, how would you like to learn a language that has between 44 and 46 (linguists still argue about it) noun cases?

First off, let’s be clear that yes, this is a real language spoken by ordinary people, not all of whom are even geniuses. Tabasaran is considered one of the most difficult languages in the world. There are around 150,000 Tabasaran people living in the Republic of Dagestan (located in the Northern Caucasus) who grow up speaking this language.

The other southern republic, Karachay-Cherkessia, is home to another Caucasian people: the Abazins. Their alphabet contains 71 letters (for comparison, Russian has 33 and English has 26), only six of which are vowels. It’s all whistling and hissing consonants that make up the other 65, so it’s almost impossible for non-native speakers to catch the difference between them. As such, “learning Abaza on your own is practically impossible,” Russian Seven website concludes. What a shame.

But don’t think that the Caucasus is the only part of Russia where exotic languages are spoken. In the Far East, the Eskimo people of Chukotka speak a beautiful but rather hardcore language (it has 63 verbal forms). For example, to say “internet” in Eskimo you would use “”– literally “the journey through multiple layers.” Isn’t that beautiful?

Officially speaking, there are more than 30 languages in Russia that have official status – and these are just the state ones. According to the Constitution (Article. 68), “the Republics [within Russia] shall have the right to establish their own state languages.” And this they do: For instance, in Tatarstan, Tatar is taught at schools, in the Republic of Chuvashia – Chuvash, and so on.

This doesn’t mean, however, that these languages are widespread. When asked during the 2010 census, “What languages do you speak?” English was named most often after Russian by 7.5 million or 5.48% of the people polled. After all, it’s taught in schools almost everywhere – and the biggest minority languages, such as Tatar, barely reach 3%. Languages like Tabasaran or Eskimo are as exotic to ethnic Russians as they are for foreigners.

Between life and extinction

Against this background, it’s hard to say whether less-common languages in Russia will continue on or are slowly dying. Language extinction is a real threat, as Russian peacefully yet effectively displaces them. “People living within [ethnically non-Russian] national communities tend to believe that speaking Russian is their key to social success, promotion in life,” Takie Dela quotes Sergey Tatevosov, who heads the Department in the Moscow State University, as saying.

In other words, you can cherish lullabies in the rare language your mother used to sing to you in but Russian is a necessity in big cities, so many people from ethnic minorities tend to lose connections with their roots. Tatevosov says this can hurt Russian culture, since “The idea of Russia is being united and at the same time diverse, giving everyone to be themselves. In this context, it’s important to preserve and strengthen languages of all peoples living here.”

At the same time, not all ethnic Russians are happy with the languages of national minorities being taught in regional schools where they live. For instance, after President Putin expressed the viewpoint that “it’s unacceptable to force a person [at school] to study a language that is not their mother tongue,” several hundred people protested the mandatory instruction of the Tatar language in all the schools of Tatarstan.

“I understand the concern of Russian-speaking parents in Tatarstan,” said Alexey Kozlov from the Institute of Linguistics of the Russian Academy of Sciences. “Why should my children learn a non-native language they are not used to, using textbooks for Tatar-speaking kids?”

On July 25, 2018, the Russian State Duma adopted a law that tries to please everyone. It dictates that in national republics there will be a subject called “native language,” and those who choose Russian can study this instead of Tatar, Buryat or Tabasaran. This gives everyone the freedom to choose, and so now the fate of languages other than Russian will be decided by national minorities and whether or not they choose to study their national languages.

In the previous version of the  we wrongly mentioned that there are 32 letters in the Russian alphabet. Russia Beyond sincerely apologizes for the misinformation. There is a mysterious Russian letter "Ё" (on which we have a separate article) which was previously considered to be a variation of the letter "Е" and that's what got us confused.