10 steps to get a kick-ass Russian accent 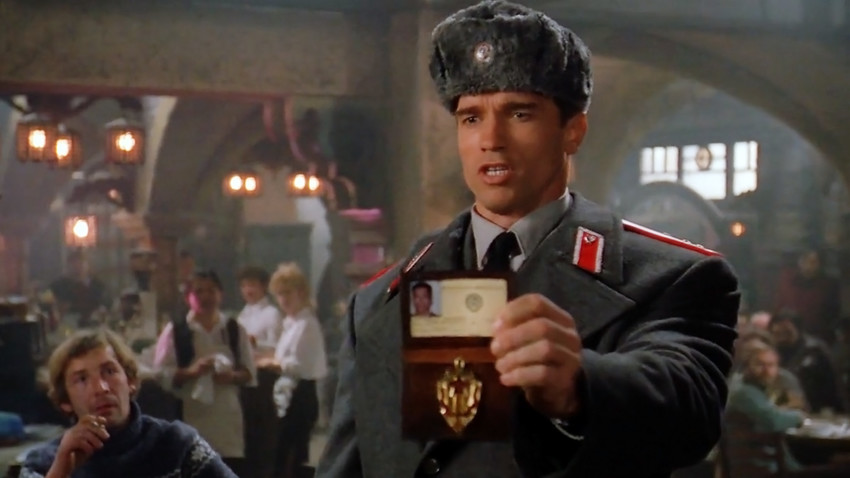 Screenshot from the 'Red Heat' movie (1988)
Want to command respect as if you were a badass Russian villain in a Hollywood film? Reckon you can do a better job than Harrison Ford’s questionable attempt at a Russian accent? Russia Beyond has you covered.

A Russian accent is often imitated by English-speakers but rarely perfected. You’ll probably be familiar with the mean-sounding tone usually heard in Hollywood Russian accents, but do you know which sounds Russian speakers most commonly carry through to their spoken English? Follow these tricks, and you’ll be sounding like a native in no time!

There is no “i” sound in Russian, and many native Russians substitute it with an “ee” sound when learning English. For example, only an accomplished English-language student in Russia can pronounce the word “big” just like they do in England or America. In reality, a true Russian says “beeg!” For maximum effect, accompany this sound with a nostril flare, and watch your adversaries’ self-confidence slowly erode.

Test yourself: “This fish is a little bigger than this insect” (Like a Russian: Zees feesh eez a leetle beeger zan zees eensekt)

There are no Russian-language equivalents for “a” or “the,” so of course this can be a tricky concept for Russians to get their heads around. Even Russians who speak fine English will mess this up from time to time. So, let them inspire you and be a little more liberal with your grammar!

Now, you try: “Open window please.” “I would like to see movie today.” “Winning Eurovision is proud moment for our country.”

Many associate tongue rolling exclusively with Spanish. The Russian roll is perhaps even a little slicker because it’s a shorter sound that doesn’t really affect the flow or stress of the word, making it generally much less noticeable than in Latin languages. Try lightly flicking the tip of your tongue against the roof of your mouth. It’s harder than it seems! Take inspiration from that tongue-rolling meme king, Vitas:

Now try this tongue twister: “The rich man ran in a round-robin race in Rotterdam.”

Russians have a tough time with the letter “h,” which is often replaced with a “g” when used in borrowed words from other languages. For example, the Russian word for “hamburger” is “gamburger,” while Russian teens enjoy reading stories about “Garry Potter.”

When speaking English, however, Russians usually have to use the “kh” sound instead, which is phonetically closer to the English “h”. This gives the sound a really harsh, back-of-the-throat, phlegm-filled edge, instantly making others less likely to mess with you.

You won’t often hear a Russian say a hard “e”, especially when following a consonant. To be legit, make your “e” sound more like a “ye”. In Russian, the name Yeltsin, for example, in fact, begins with a Russian “e,” which has been softened.

As you probably already guessed from all the “ze’s” in the example sentences, Russians have a hard time finding the halfway point between hard and soft sounds in English. To have a good Russian accent, you must pick either one – “the,” for example, must be pronounced either as “de” or “ze.” “Thick,” on the other hand, could be either “tick” or “sick.” Don’t worry if people don’t understand you, by this point they’ll be way too scared to try and correct you.

Test yourself: “Take the third path to get to the theater.” (Like a Russian: Tyeyk ze soord pat to gyet to ze teeatr)

7. Take your 'u' sound to the extreme

Russians really struggle with the “uh” sound that is common in English. To alleviate this problem, they have a range of options at hand. If it’s a short “u”, they usually replace the sound with an “ah” – so “young” becomes “yang,” and “but” becomes “bat.”

When the “u” sound is a little longer, Russians tend to pronounce it as an “oo.” For example, the word “hurt” becomes “khoort,” while “put” is pronounced as “poot.” When there’s a “u” involved, don’t underemphasize it. Instead, really ham the sound up!

Test yourself: “The young man is upset because the bird is cut.” (Like a Russian: Ze yang men eez apset becaz ze boord eez cat)

To be fair, not all Russians make this mistake. However, why not go for a stereotypical full monty here? After all, Russian doesn’t have a “w” sound, so if anything, it’ll add authenticity to your Russian accent. Watch your enemies’ fear intensify as you tell them, “I vill be back,” or “you von’t vant to mess vis me.”

Test yourself: “Will you want to be wearing that waistcoat on Wednesday?” (Like a Russian: Vill you vant to be vyering zet vyeistkot on Vednyesdyei?)

Everyone who comes to Russia will at least once endure the awkward experience of being asked a question, and having absolutely no idea they’re even being asked something. In English, things are clearer thanks to an upward cadence at the end of questions. Russians make things a bit more cryptic, often throwing in the stress somewhere near the middle of the sentence. Try saying this:

“Do you want to come to the park?”

Where did your voice rise? Be honest, was it on the word “park?” Dead giveaway! Now try again, inflecting on the word “want,” then bring the sentence on a downward slope:

“Do you WANT to come to the park?”

Much more confusing, right? That’s the beauty of it, though. If people are having a hard time with your true Russian question-asking skills, just give them a look that says, “What’s wrong with you?”

10. Have the right attitude

A convincing Russian accent suggests power and confidence – this means speaking calmly and slowly with a deep, authoritative voice. As for the tone: it should be somewhere between, “I don’t have time for this,” and “you get what I mean, yeah?” You can’t smooth-talk your way around Russia; getting what you want often involves assertiveness and sternness, so be ready to wear this attitude in public at all times. There’s a reason they say Russians don’t smile!