Education
Ksenia Zubacheva
advertising
Can you imagine robots, solar-powered vehicles, a supercomputer, a brain disease research lab and innovative startups all under one roof? Welcome to the Peter the Great St. Petersburg Polytechnic University (SPbPU), one of the leading Russian engineering universities.

Founded in 1899, Peter the Great St. Petersburg Polytechnic University (SPbPU), also known as Polytech, is considered one of the top research and educational institutions in Russia, producing world-class professionals in a variety of fields, including: applied physics and mathematics, industrial engineering, chemical engineering, aerospace engineering, etc.

More than 33,000 students are сurrently enrolled at the institute, including 7,000 from Europe, Asia, and Africa. The university has a representative office in Shanghai, China and an information center in Madrid, Spain. These centers help the university find the best international applicants and promote Russian culture abroad.

Polytech is part of the Russian Academic Excellence Initiative (‘5-100 Project’), a state initiative aimed at improving Russia’s universities’ position globally and making them more competitive with other top-tier universities abroad. Within this effort, Polytech has been working hard during the last five years to modernize itself. Just recently, on May 16-17, the university hosted a Project 5-100 conference, where it discussed the progress already achieved by Polytech and the challenges still facing the university and other academic institutions in the country.

“If one compares how the university looked like in 2013 and how it looks today - these are two different universities…,” argues Andrei Rudskoi, rector of SPbPU. “Implementing the ‘5-100 project’ required us to change the image of our university, its internal structure, and psychology, the quality of teaching, its brand, as well as our participation in international summits, our publication activity and increase our cooperation with high-technology industrial companies. So today, it truly is a new university that is part of the world scientific academic elite.”

According to him, the amount of foreign students at Polytech has grown by three times over the last five years. This is a sign that the image of the university as a competitive educational institution has improved, he says.

Over 100 world-famous brands currently partner with the university. These include not only large Russian corporations like Rosatom and Rostech, that play a significant role in the country’s economy, but also foreign companies like Siemens, GM, Intel, Airbus and Festo Holding GmbH. They work together with Polytech on joint research projects, as well as offer employment for the institute’s graduates.

From robotics to innovative startups - here are five research labs that the Polytechnic University is most proud of:

Established in autumn 2018, the Kawasaki-Polytech Robotics Center is the largest science and education center of industrial robotics in Russia. 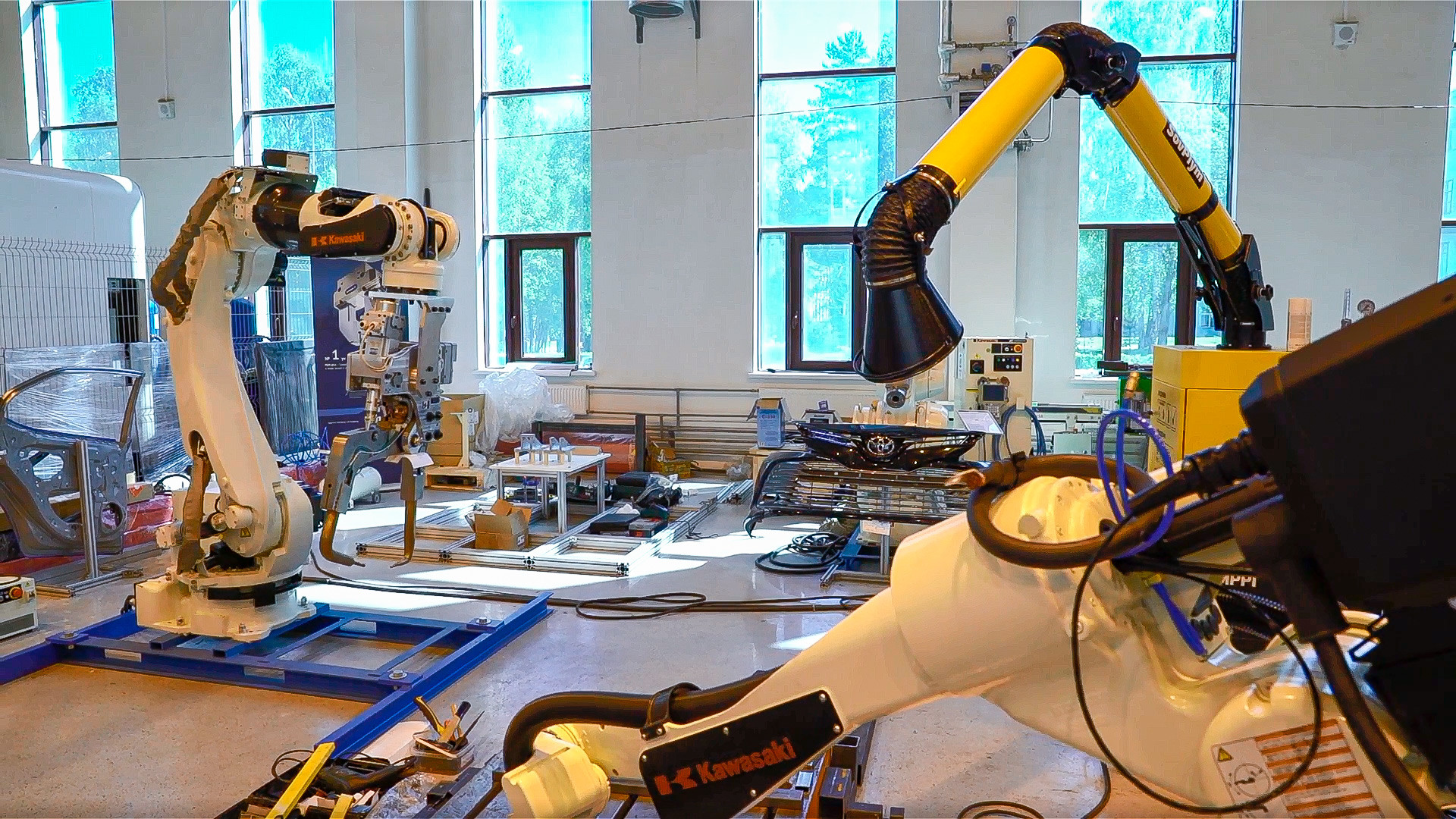 Created in cooperation with Japan’s Kawasaki machinery maker, the center works both as a show-room and as a place where engineering students and young professionals can study and work on industrial robots for the automotive industry, while preparing for a career in the sector.

Currently, the center has a range of robots that can complete complex tasks such as coloring or welding objects on their own.

Polytech’s Supercomputer Center is among the top five most powerful in Russia. It includes two systems - Nanoscale and Tornado - for different tasks. It works 24/7 and can tackle complex and interdisciplinary research for a variety of fields - from mechanics to biophysics and biotechnology. 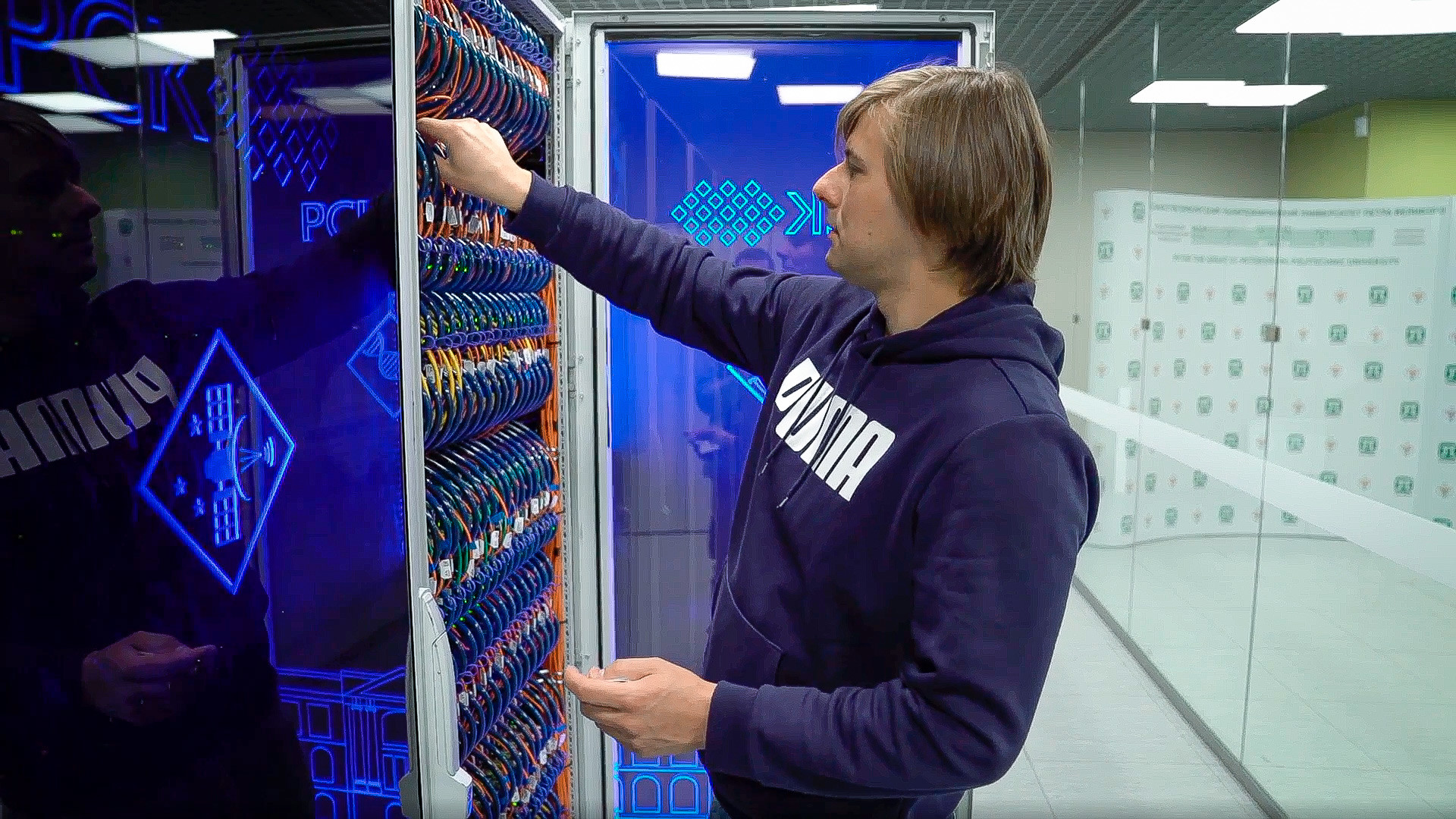 According to leading electronic engineer Anton Lukyanov, the supercomputer is used not only by students and academic staff, but also by outside companies, not necessarily affiliated with the university.

“One of the key differences of this computer from the personal computer is that it allows to unite different computers - two, ten, or even 15. This brings together the power of a large number of computers to solve one big problem, thus, making it possible to make calculations faster,” he explains.

Finding a cure to such diseases such as Alzheimer's and Parkinson's is not an easy task, but the Molecular Neurodegeneration Laboratory at SPbPU strives to move closer to making it a reality. In Russia, there are a number of research centers working in this area, but all are located in Moscow. Polytech’s lab is the only lab in St. Petersburg that focuses on studying the reasons behind brain dysfunctions. 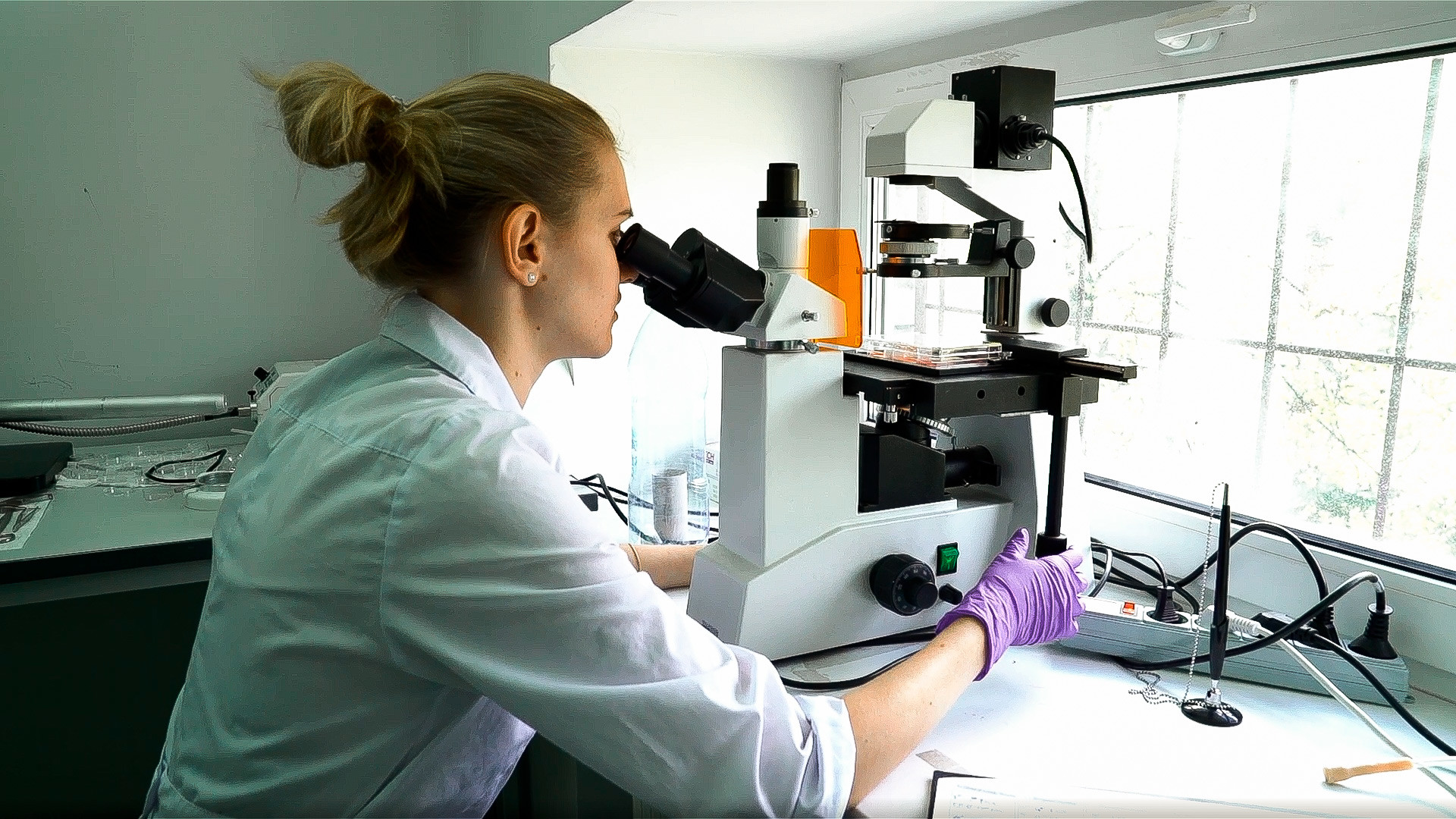 The studies involve both molecular research and behavioral trials on genetically modified mice that are commonly used for research or as animal models of human diseases, and are also used for genetics research.

“One of the experiments that analyzes the brain dysfunction at early stages on mice is to see how their behavior changes. To see that, we put them in a situation where they have to walk along a straight stick. If they can do it easily, they are healthy. If not, and if they get confused and fall, something isn’t right in their brain,” deputy head of the lab, Olga Vlasova, explains.

The lab has been working since 2012 and has already registered a patent on a certain chemical compound which may treat such diseases in the future.

A unique project started by Polytech’s students and postgraduate students, the Solar Team Lab has a number of projects: the Formula Student race car, a solar wingship and a solar race car. The latter is the most complex of the three, and has even been autographed by President Vladimir Putin himself during his visit to the university in 2018. 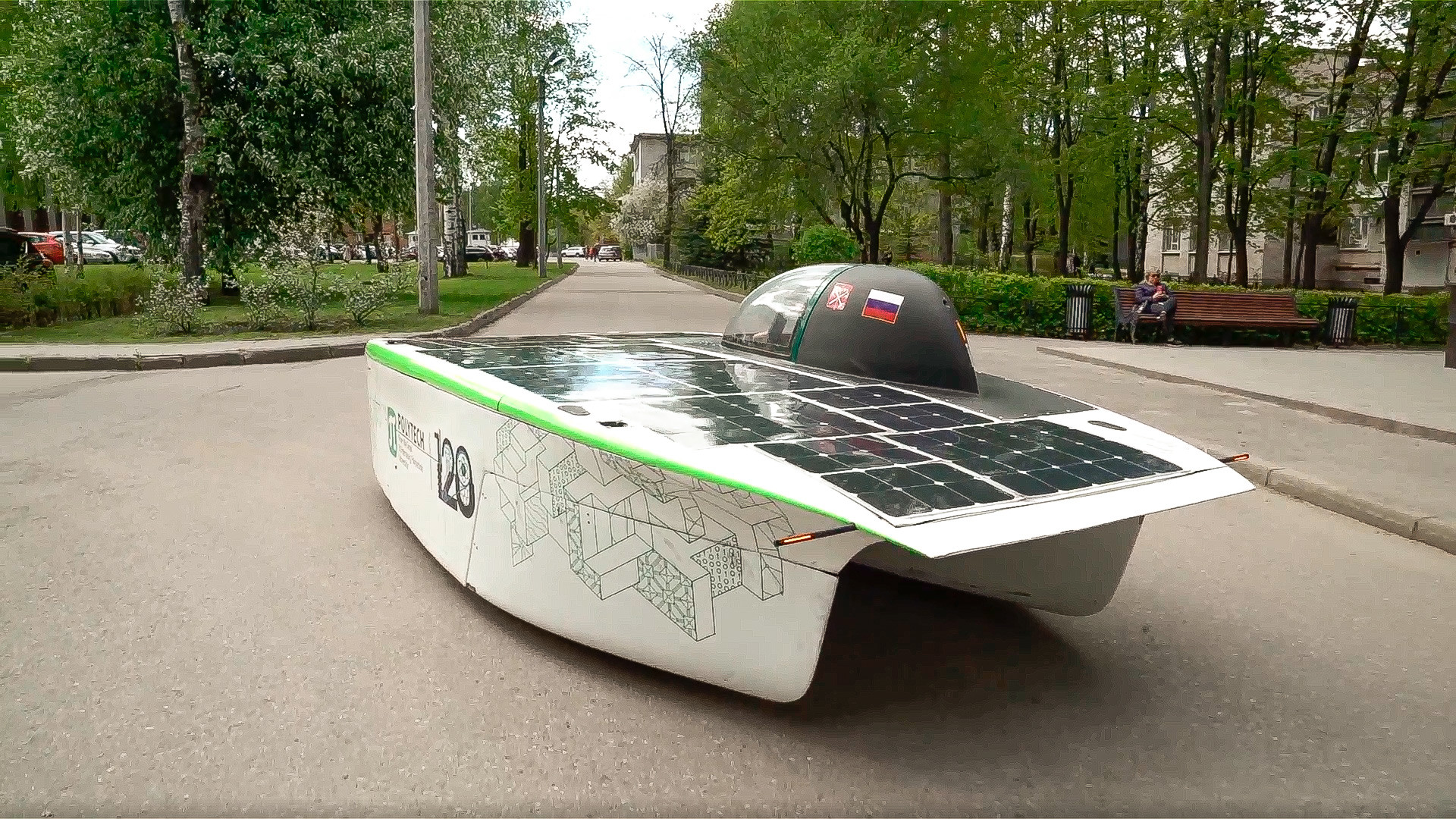 Built in two years (with calculations done using the supercomputer), the car can go as fast 90 km/h and has already been showcased abroad. Last year, it participated in the 2018 American Solar Challenge and was awarded the ‘Best First Time Car’ award.

“Today we are working on adjustments for the next season, again for the U.S. and on implementing our idea of transforming it into a driverless car,” says Head of Polytech Solar Team, Evgeny Zakhlebayev. Last year the team was sponsored by Kaspersky Lab and now receives support from Polytech and French company, Motul.

From Rube Goldberg machines to motor buggy prototypes - Polytech's FABLAB (Center for Creativity) is a place where everyone can get the necessary support to make their ideas a reality. Students and engineering innovators from outside the university work on dozens of projects here using its facilities, technical support and consultation throughout, which provided by the center for free. The center’s facilities also include 3D printers, lasers, and various instruments.

Among its success stories is the startup “Air&Soil Technologies”, which developed an “iSee” drone robot that can visually identify plants or weeds for individual spraying, rather than affecting the whole field/area. This cuts the chemicals used by 80 percent and increases the yield on average by 12 percent. 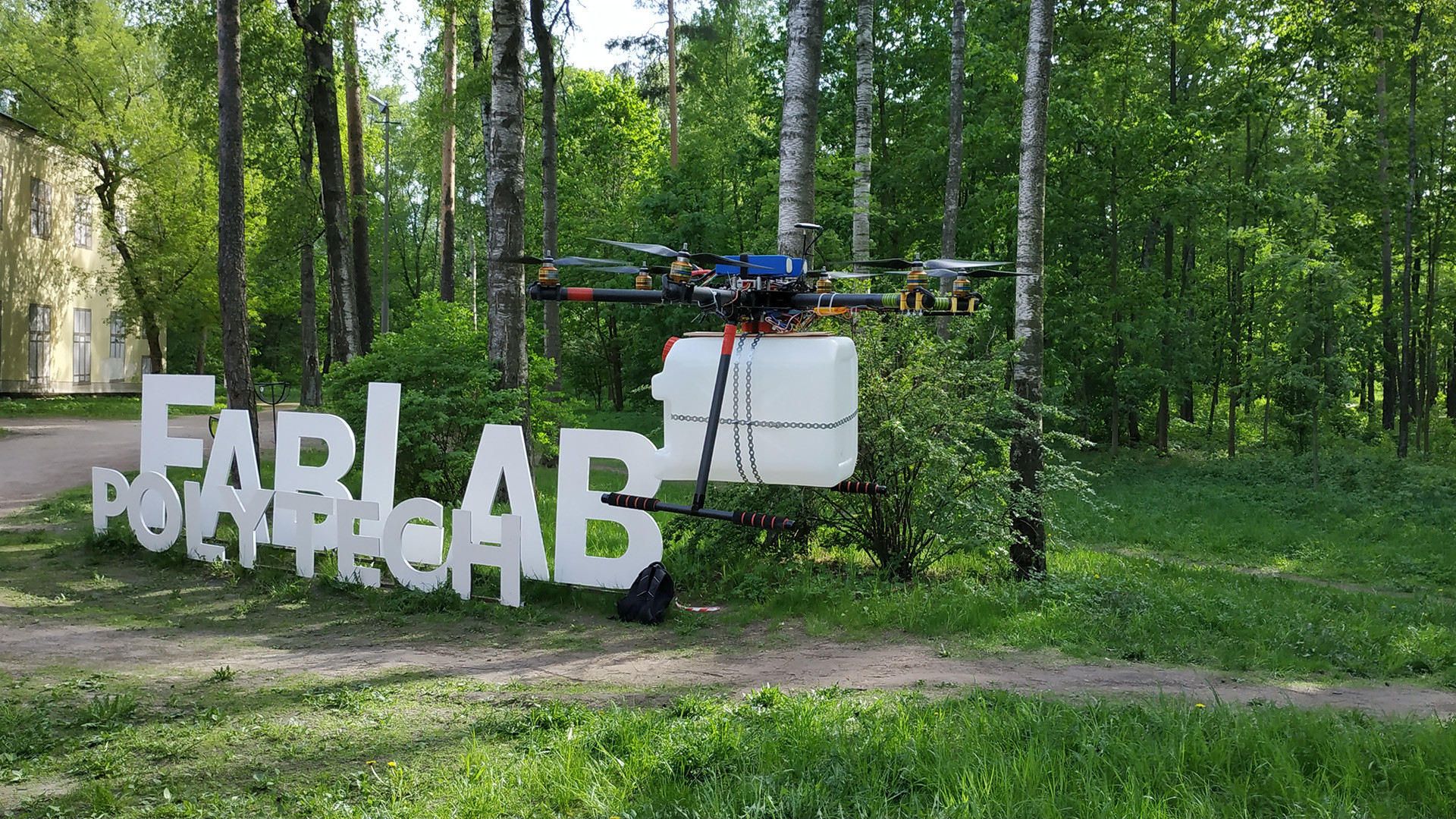 As Akmal Kholikulov, the founder of the startup, recalls, the project was implemented within the walls of FABLAB using its instruments and Polytech’s consultation support with promotion and commercialization of the idea. “At first we thought about developing a drone for ‘shooting’ seedlings on a field, but after carrying out a poll and consultations with experts, we decided to change it to the current version,” he explains.

“We invested our personal funds, but got necessary support from Polytech with everything related to entering the market (promotion and coming up with our proposal to potential clients). Within the FABLAB walls, we constructed the drone and tested it on the university’s grounds,” he says, adding that now the company has already secured a contract with a Russian agricultural company.