Russian is way easier than you think: Typing in Russian 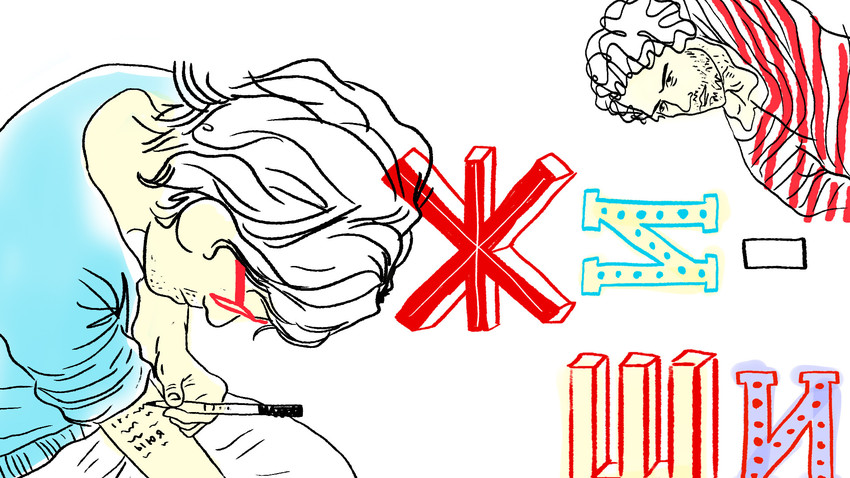 Tim Kirby continues his battle to bust the myth that Russian is the hardest language on the planet. Typing in a different language may be terrifying to some, but in Russian it is actually very logical.

(Psst! Read more about Tim’s mythbusters about the Russian language here and here!)

Learning a foreign language as an adult used to start out with books, a pen and paper and maybe some Youtube videos; but this is the 21st century, so now, more than ever, Russian language learners need to make the jump from pen to keys as quickly as possible. Nowadays, we are all typing messages to each other, not writing out cursive masterpieces with quill and ink, so for those who are curious, let’s take a look at how to type in Russian.

How do I enable typing in Russian on my computer?

First you need to set up your computer to have multiple languages. If you have never done this before, it is easy and has no consequences for your computer.

On Mac OSX: Click the Apple Icon in the upper right hand corner, then go to System Preferences, Language and Region and hit the little “+” box to add an additional language.

On Windows 10: Open Settings from the Start Menu, Click on Time & Language, then click Language and then Under the "Preferred languages" section, click the Add a preferred language button.

How do I switch between Russian and English keyboard layouts?

Now that you have two languages set up on your computer, you can swap between them by clicking the letters EN or RU in the lower right hand corner on Windows or the flag at the upper right on Mac, but doing it this way is very time consuming and frustrating. Great Russia demands that you use key commands to optimize workflow for a successful economy! Being able to flip between Cyrillic and Latin letters on the fly is important, especially if you are bouncing between typing out your Russian homework in one window and taking time to comment on your buddy’s vacation photos on Facebook in another.

By default, to switch between languages you need to hit.

On Mac OS X: ⌘ and Space at the same time.

On Windows : Shift and Alt at the same time (usually).

The Russian alphabet has 33 letters, while English has 26. Since there is no extra ‘real estate’ by one’s left hand (where the Tab and Caps Lock are) Russian letters have drifted to the right with some of the least used ones occupying the keys normally for punctuation like the apostrophe and brackets.

This is what a standard Russian Windows layout looks like… 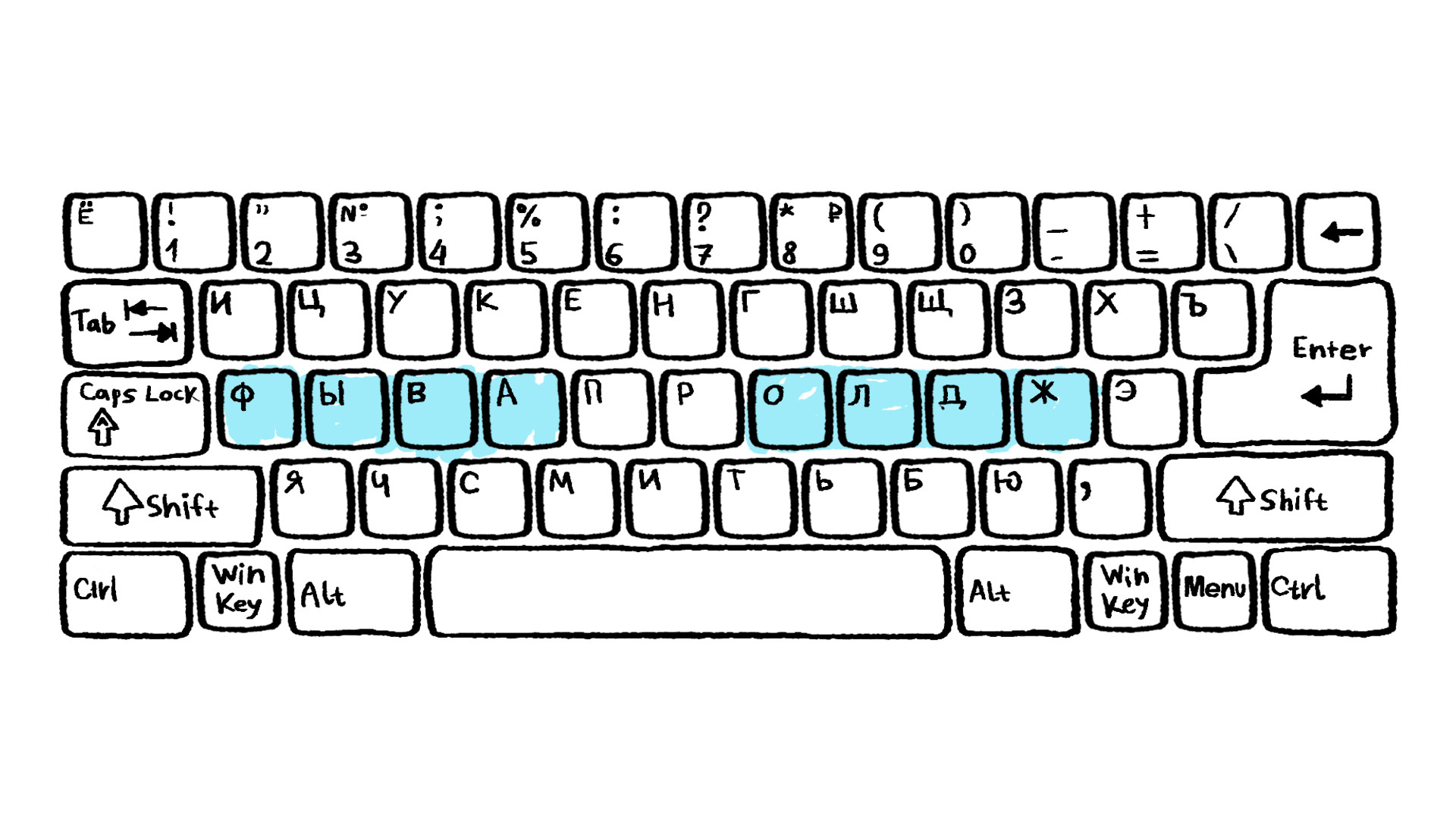 As you can see, not a lot of punctuation is left after the great key migration to the East of the keyboard. Also, you should note that ‘ъ’, which is rarely used, is in an impossible to hit location, as is ‘ё’, which most Russians omit by just using ‘е’ instead. In fact, the Russian keyboard is a major reason why the ‘ё’ usage revival will never happen, because constantly hitting the tilde key ( ~ ) is just no fun.

The standard Russian Keyboard for Mac looks like this… 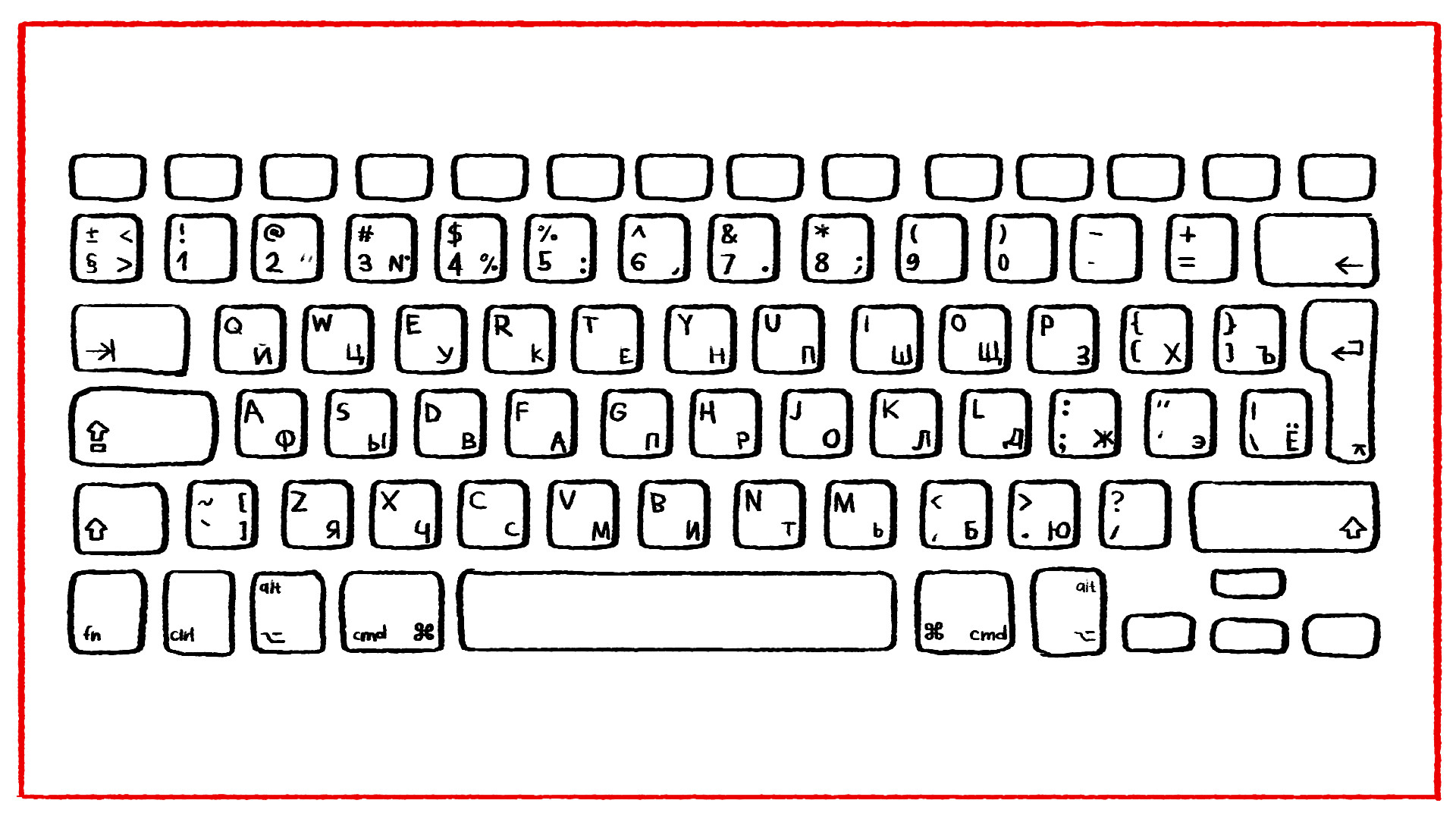 If you look closely, you can see that the Mac OS X gives more love to the letter ‘ё’, moving it back within sane range for semi-regular usage, however, Apple has instead moved the comma and period/full stop up to the NUMBER KEYS! Periods which happen at the end of every sentence and commas which happen seemingly after every three words in Russian require you to hit Shift + 7 or 6 respectively - every time! I enjoy Mac OS X a lot… but not this aspect of it. It does get bothersome, but it also means that, just like in English, if you plan to hop between operating systems, you need to learn to type on both. I’ve been told by my colleagues that most Russians force Macs to work using the Windows layout, but that is no fun and it makes the keys not match up with the reality of your button pushes, which offends me personally as someone with a design degree!

This looks intimidating! Is there another way?

In English, I’ve never used a computer that wasn’t set to QWERTY by default, but everyone online says that DVORAK or some other alternative layout form would be a lot better. For Russians, there is no debate: there is one keyboard layout and it works fantastically. For expats/immigrants/polyglots, there is an alternative, but more on that later.

If you look at an infographic showing the keystrokes needed in Russian to make the first chapter of Crime and Punishment, you will see that the overwhelming majority of keystrokes are in the middle of the keyboard and comfortable to hit… take that QWERTY! 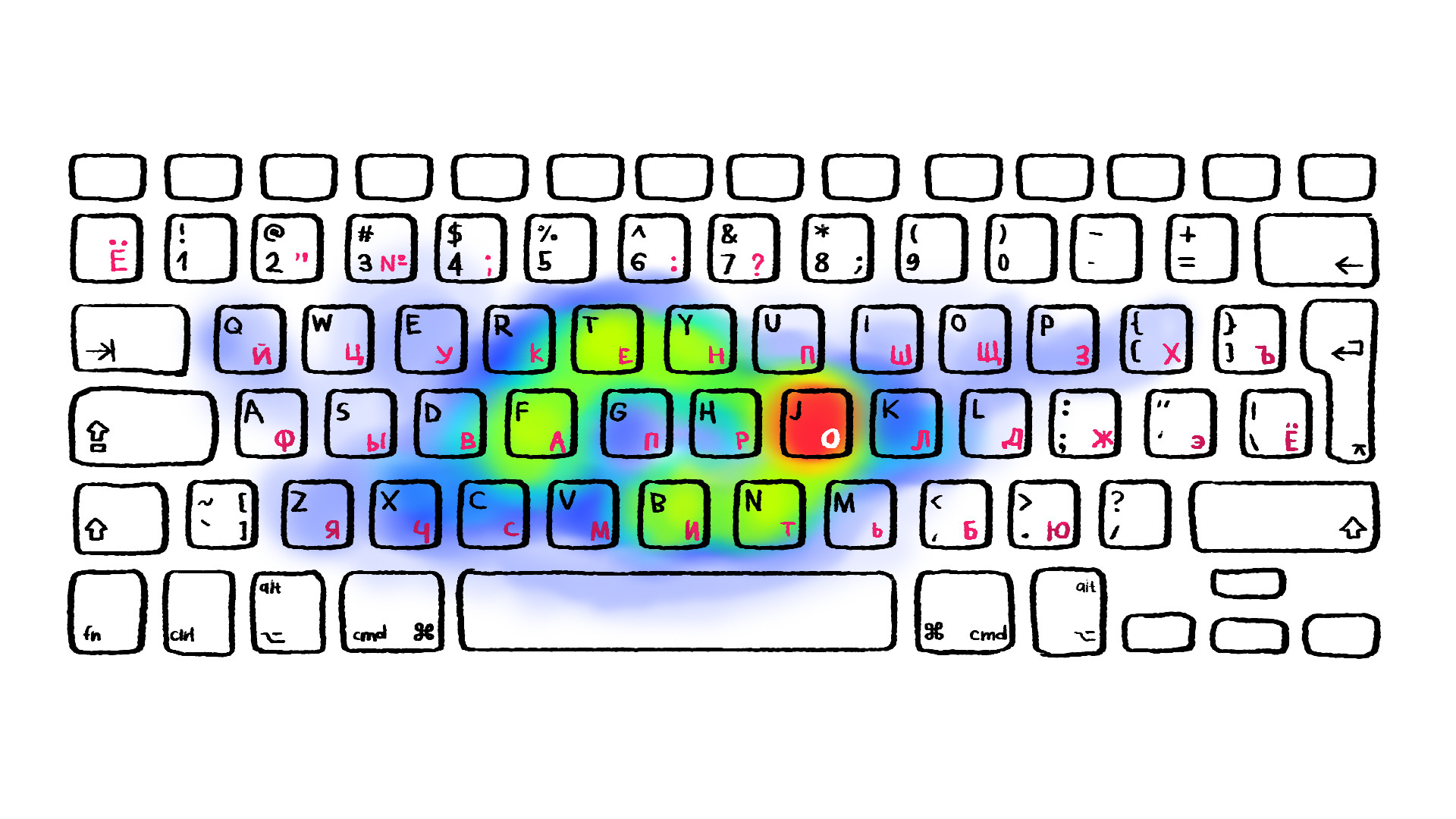 Now, for some reason, if you think it is impossible to learn to type on the Russian keyboard exactly the same way you learned to do it in English, then you can use a transliteration keyboard instead. This set up assigns the Russian letters to their English equivalents and has found some popularity in expat communities. It looks something like this. 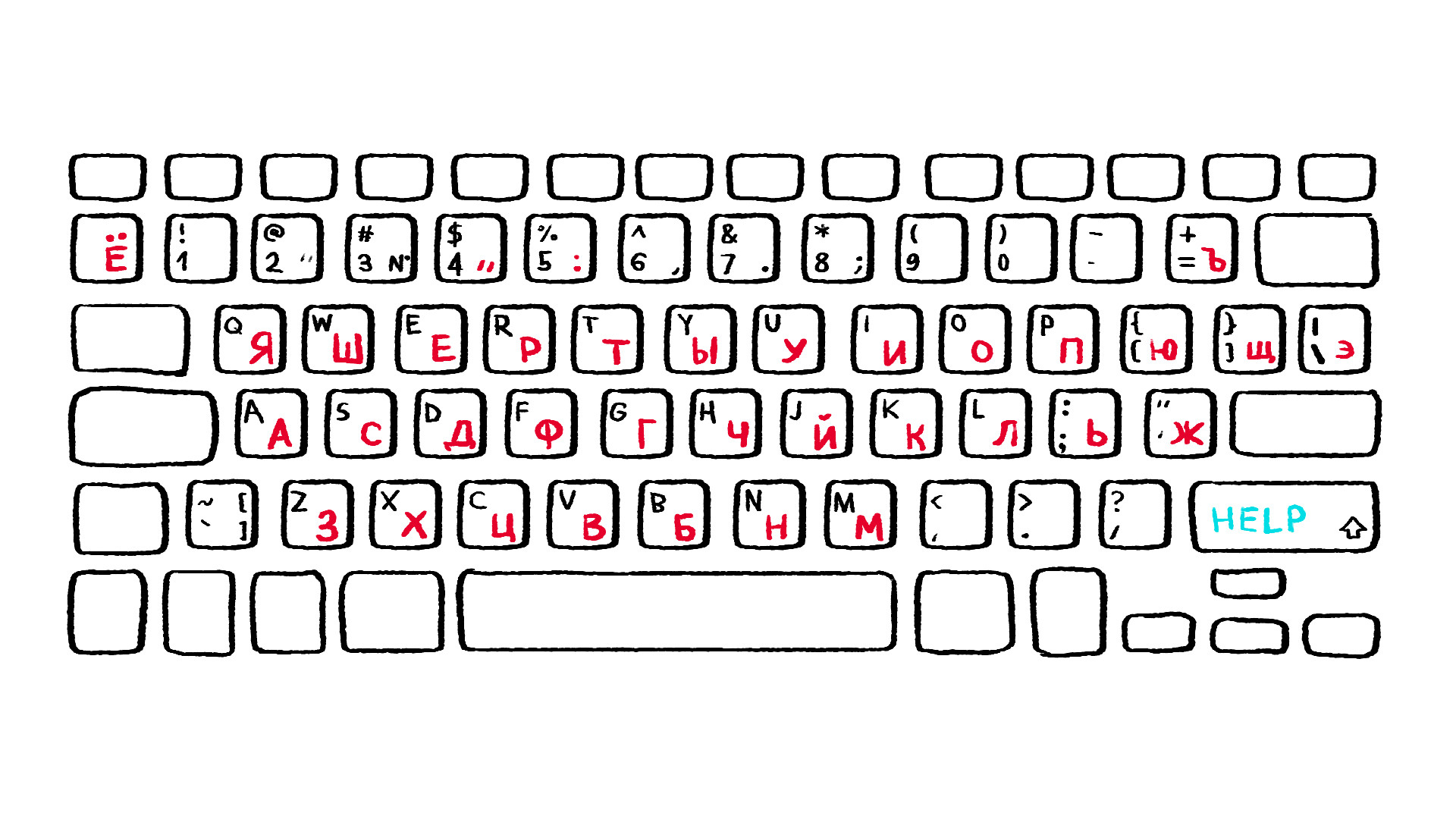 This option sounds easy, because you won’t have to relearn to type and have two separate sets of muscle memory in your brain fighting for dominance, but there are three major problems with the transliteration keyboard that you should be aware of.

This is nice and all, but how can I type without looking at the keyboard?

Russians love to import things, both legally and... not so legally. So, there is a market for people within Russia who want to put Cyrillic stickers over their foreign keyboards. Just type “Russian Keyboard Stickers” in the search bar on Amazon and tons of options will appear in all sorts of sizes, fonts and colors. They will look something like this… 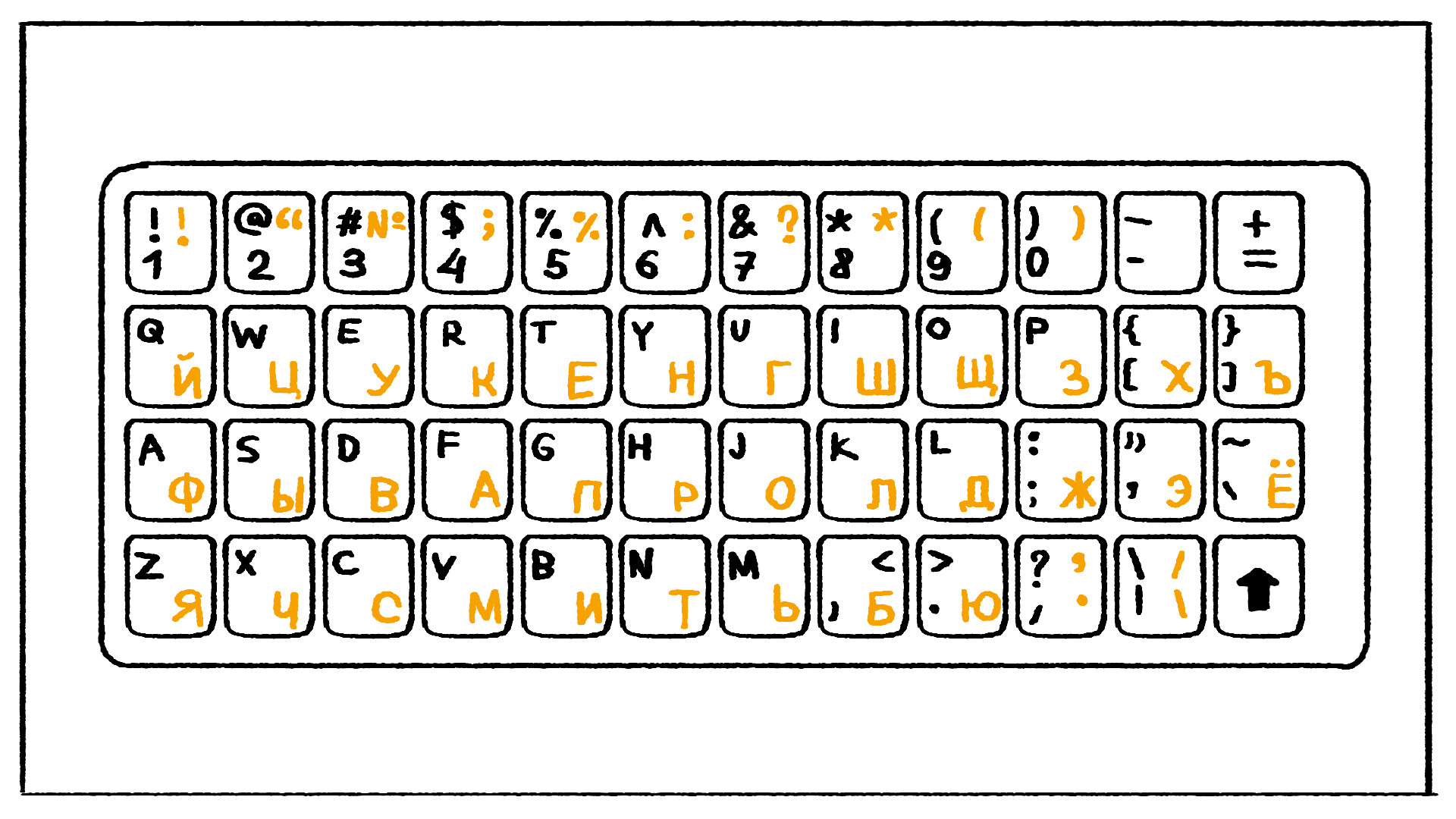 Having the languages in two different colors can be helpful, just be careful to put them in the right positions!

If you are really hardcore, all computers and keyboards in Russia come with Russian letters  on them by default, without the need for stickers. If you are even more hardcore, you can get a computer laser engraved to have the Cyrillic letter burnt onto any keyboard, including one on an ultra-expensive Mac laptop, which is the dream comp of all trendy Russians.

Typing in Russian is basically the same as English

If you can type in English you can type in Russian. There is no need to build complex symbols or use some other unusual mechanics. The logic of the keyboard is the same just there are more letters and less punctuation marks and some noticeable differences between Windows and Mac layouts. But that is really it. The Russian keyboard is logical and easy to learn and, just like the alphabet, perfectly suited to the language by design.