8 of the best gems Americans ask in Russian class

Education
Viktoria Malik
Yury Gagarin Cosmonaut Training Center
Cultural and linguistic differences sometimes raise great questions that your Russian teacher might have never thought about before. Here are some of the best and most frequently asked ones.

This one might reflect a few stereotypes about Russians, but it’s not fully true. Such common English words as “joy” and “fun” actually do not have a direct translation that Russians would naturally use in everyday language. "Наслаждайся" (“Naslazhdaisya” - enjoy) or "веселись" (“veselis’” - have fun) not only sound odd in an imperative form (“enjoy your day!”), but also a little sarcastic. These words are broadly used in sentences when you want to describe situations about yourself or others, but not when you wish “joy” and “fun” for someone directly: "они веселились" (“oni veselilis’” - they had fun) or "я наслаждаюсь моментом" (“ya naslazdayus’ momentom” - I enjoy the moment).

If you still want to find a close translation, the best alternatives for wishing someone to “have fun” or “enjoy” themselves would be "Желаю вам хорошо провести время" (“Zhelayu vam harasho provesti vremya” - I wish you to spend time well). Or simply "Приятной прогулки" (“Priyatnoi pragulki” - have a pleasant walk), which you can use for any noun that implies an action or process.

As for “exciting”, we have the words "захватывающе" (“zakhvativausche”) and "воодушевлен" (“voodushevlyon”), which mean something closer to “excited”, but are not very accurate and not commonly used either. So when you want to say “I’m excited about the concert”, you’d rather say "я очень жду концерта" (“ya ochen’ zhdu contserta” - I’m looking forward to the concert), which literally means “I’m really waiting for the concert”. At the same time, when you want to say “that’s exciting”, you should rephrase it to “that’s great/wonderful/good” which would be "отлично/здорово/хорошо" (“atlichno/zdorovo/harasho”).

2. Do Russians never use the verb “to have” because of the Soviet past?

This one is a perfect opportunity to help explain how to learn to say “I have...” (У меня есть - U menya yest’...) properly in Russian. It’s true that Russian speakers avoid using a verb literally meaning “to have” when describing possessions. "У меня есть" (“U menya yest’...”), the preferred phrase, literally means “by me there is...”. However, this phrase has been around since long before the nationalization of private property occurred. There is also a verb literally meaning “to have” as well - “imet’ ” - but Russians don’t use it too often in everyday language. The rare situations when you would say "иметь" (“imet’”) generally involve sophisticated-sounding wordings in official documents, or in expressions, such as "иметь право (“imet’ pravo” - to have a right), "понятия не имею" (“ponyatiya ne imeyu” - I have no clue), and "иметь в виду" (“imet’ v vidoo” - to mean).

You might notice that all these phrases imply the possession of an abstract concept, so be careful with using “imet’” referring to people or physical objects - the expression even takes on sexual undertones in this context, often used by everyone from online game players to kids describing unpleasant run-ins with teachers and other superiors, e.g. “I got owned”. 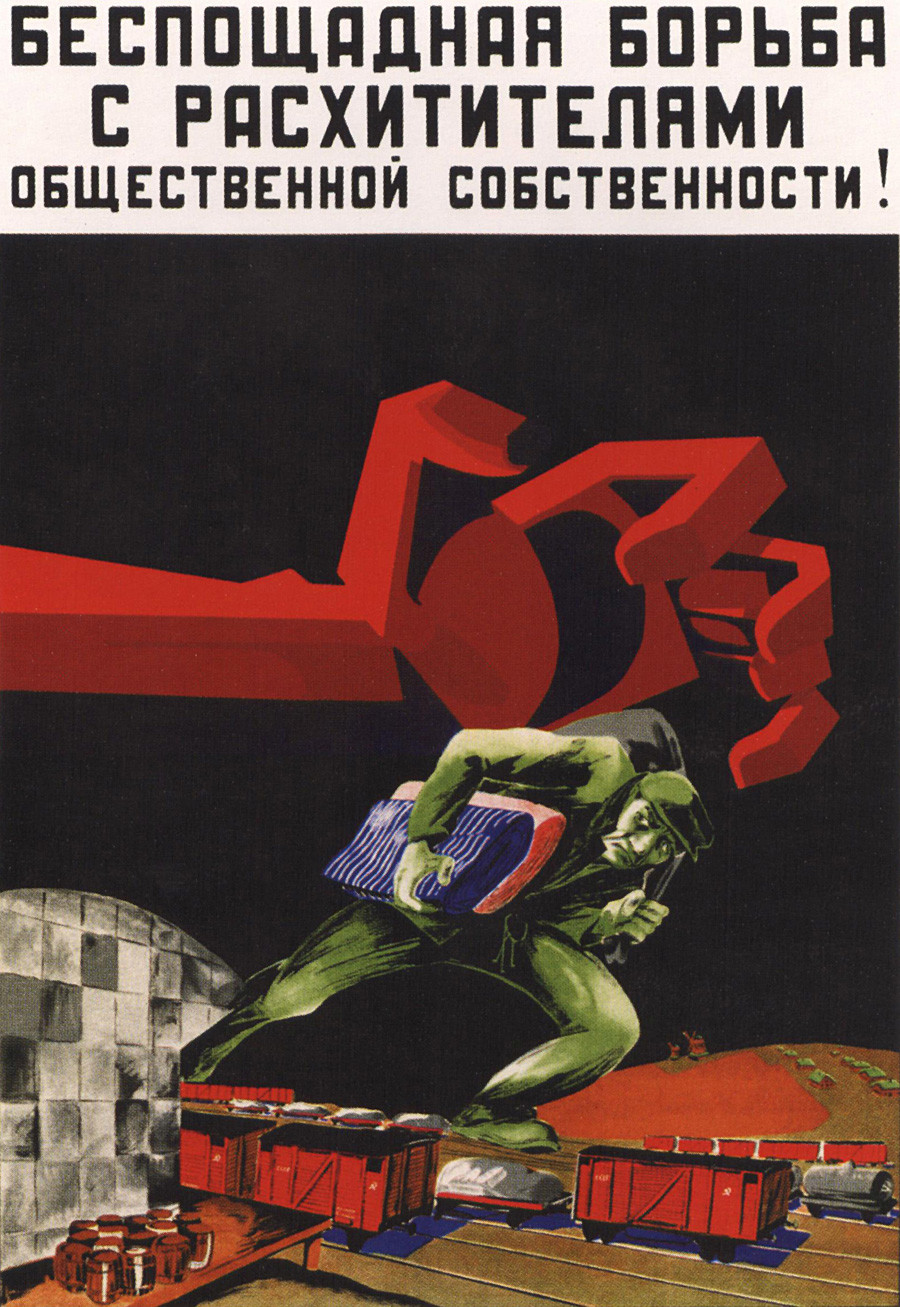 Soviet poster, “The relentless fight against thieves of public property”

3. How to say “there is/there are…” sentences in Russian?

The answer to this question is pretty simple: in Russian, you reverse your sentence and say the name of the place before everything else. For instance, in the sentence “there are many people at the theatre” you’d say "в театре много людей" (“v teatre mnoga lyudey”), meaning “in the theatre, [there are] many people”. 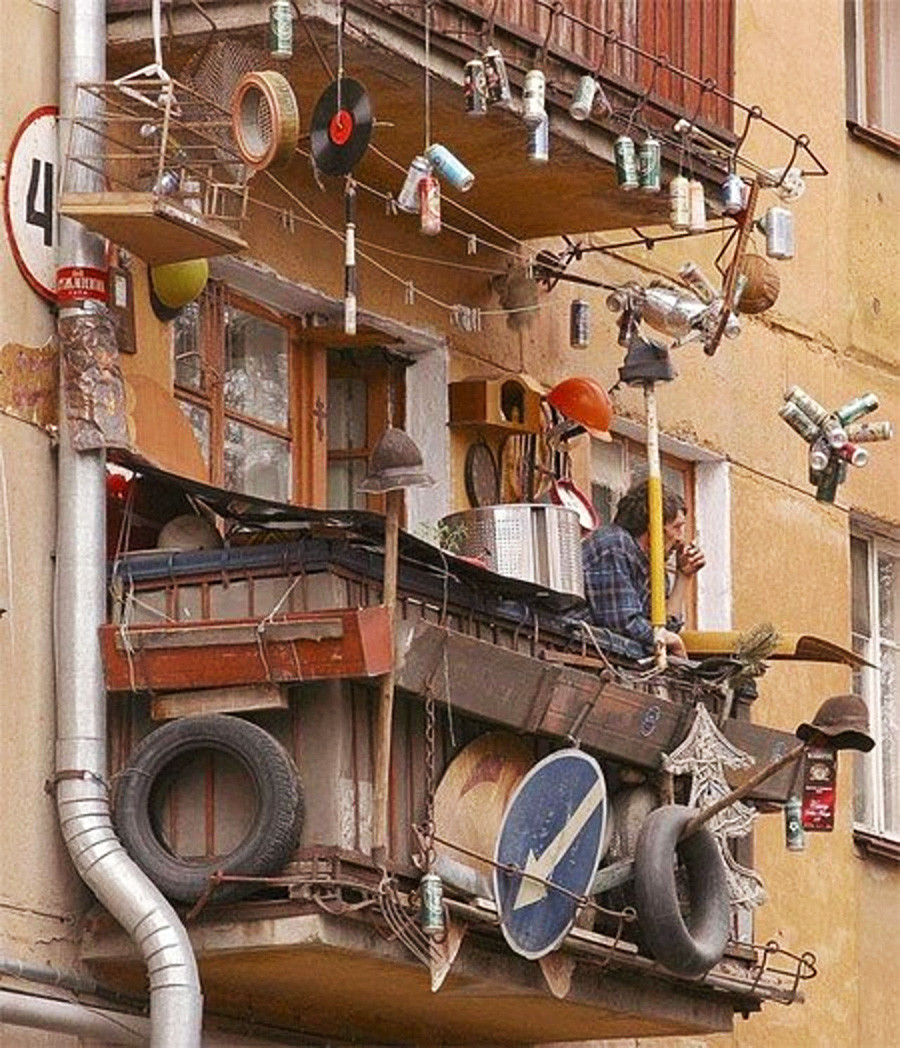 4. How do you call a closet or a basement area where you store your washer, dryer, and other things?

Well… first of all, most Russians live in comparatively small apartments, sticking their stuff in small closets in their two-, three-, or four-bedroom places. For the word “storeroom” or “closet”, use "чулан" (“choolan”) or "кладовка" (“kladovka”), whose root “klad” actually means “treasure”. When some apartments don’t have such storage spaces, Russians get creative, keeping things on their balconi (balconies) that sometimes can expand in the most surprising ways. Also, Russians rarely use dryers in their apartments, partly to save space, buying small folding “dryers” (racks), which you can keep against the wall in a small kladovka or balcon. 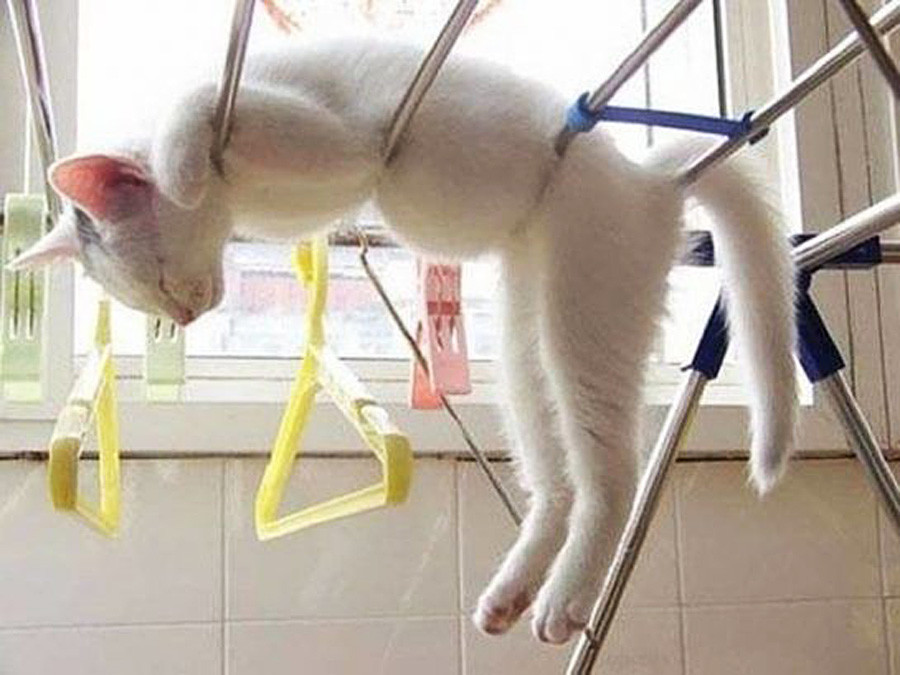 5. How do you address a stranger? Mr? Comrade? Lady?

Although the most standard and neutral manner would be "извините, пожалуйста" (“Izvineeteh pozhaloosta” - excuse me, please), Russia Beyond has already demonstrated a myriad  other ways to address strangers here. Also, if people already know each other, they would barely say "господин - госпожа" (“gospodin - gospozha” - Mr or Mrs) no matter how hard they want to show their respect to their fellow teachers, coworkers or comrades. Instead, most of the time they would use their colleagues’ first and patronymic names, or simply just their first names.

Yes, "молчание - знак согласия" (“molchaniye - znak soglasiya”), meaning “silence gives consent” or, more accurately, “silence is a sign of consent”, is an actual saying in Russian. It also exists in the English language, although it is not as commonly used as in Russian. The origin of this phrase descends from Greek writers such as Sophocles and Plato in the 5th and 4th centuries BCE, who argued that if one doesn’t raise any objections against a statement, it implies that he agrees with it. Therefore, if something is being discussed and nobody has arguments against it, one might say “molchaniye - znak soglasiya”, meaning that everything is settled since there is no way to oppose it anymore.

In modern parlance, people will usually use the phrase when they’ve cornered somebody with their argument, or caught them in a lie - with the other person usually having a quiet, guilty look about them, or simply not wanting to engage further. You then victoriously use the phrase to signal your victory over them. But it’s really more of a children’s habit.

Indeed, "на улице холодно" (“na ulitse holodno”) is actually the most common way to say “it’s cold outside”. When you want to specify that you actually are going hiking far away from the city, you can say "на природе" (“na preerodeh” - in nature) in a sentence such as “I like hiking/spending time outside” - "я люблю проводить время на природе" (“ya lyubloo pravadeet’ vremya na preerodeh”).

Instead of articles, Russian is rich in cases that can specify and identify what is happening with a subject or an object regardless of its location in a sentence. Instead of adding “the” to a word to make it more definite, you should simply use demonstrative pronouns, "этот, эта, эти" (“etot, eta, etee” - “this” for masculine, feminine, plural) or possessive pronouns, "мое, моя, твое, твоя" (“moyee, moya, tvoyee, tvoya”- my - your for masculine and feminine). And in general, in "я смотрю на машину" (“ya smatryu na masheenu” - I look at [a/the] car), it’s usually clear from the context what car you’re talking about in the Russian mindset!