3 Old English rules which can help you master Modern Russian 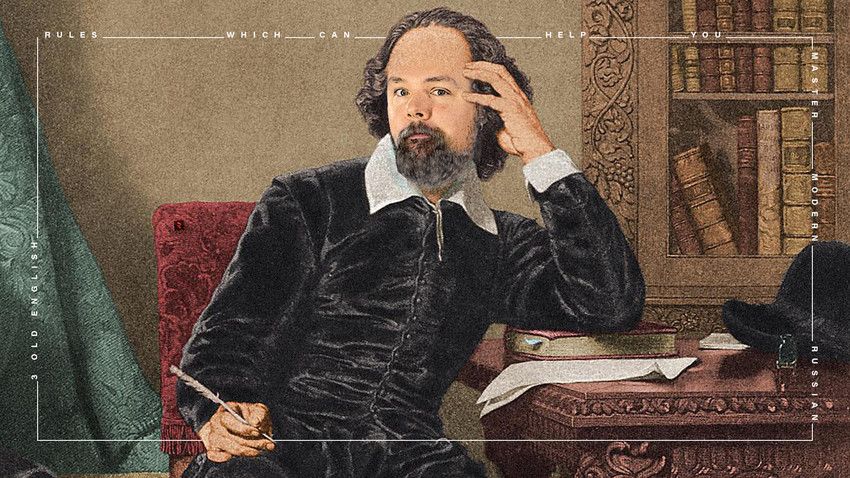 Alexander Kislov
Ancient English can teach us just how easy Modern Russian is. What, you don’t believe me!?

Sometimes the core concepts of Russian can seem very alien to native English speakers. The fact that Facebook language discussions bombard newbies with boatloads of seemingly meaningless linguistic terminology doesn’t help either. I have personally found that the biggest help in learning Russian is trying to find all the ways that it is similar to my native English, which there are actually numerous examples, but today we will look at the similarities from “yesteryear”.

The thing is that, in some ways, today’s standard Russian behaves similar to the “old-timey” way of speaking that we native English speakers kind of remember, but no longer practice. The language of the King James Bible, along with everyone’s beloved Shakespeare, has certain behaviors that are mainstream parts of the language of the largest country on Earth. So here are a few examples of how old-school English lines up with Russian.

1. Doth thou know the difference between ты and вы?

The idea that there are two different words for “you” in Russian (and in some other languages, as well) can throw native English speakers for a loop. At first, this pronoun system seems random and confusing, but we cannot forget that in our own language we used to have exactly the same set up.

Be it Hollywood movies about the Middle Ages or just a night at the Dungeons & Dragons table, people love to use “thee” and “thou” to give a Medieval flare to their speech. It seems almost natural that inside of a castle we should ask questions starting with the words “tis thyne”. The interesting thing is that, in Russian, “thou” and all its many forms is still in use, which begins to answer the question of why there is a difference between the pronouns ты (“ty”) and вы (“vy”) - “you” singular and “you” plural respectively.

This is why in the Bible, God says “thou shalt not kill” (and not “you shall not kill”), because He is speaking in the familiar form to a singular reader – which in Russian would be “ty”. As the Almighty, He would see no reason to speak to us as a superior or as a stranger (additionally, the God of the Bible is addressing the reader as an individual. This omnipresent quote - “thou shalt not kill” - is the perfect case study of how to use the Russian pronoun “ty”, because it involves speech to someone familiar, someone who is inferior and someone who is an individual.

The opposite of this would be any declaration to a group of people in the King James Bible. “You, the people of Israel” is the only option because you in the Medieval sense is the Russian вы, which is always used when addressing groups or a single person of higher status or someone you consider a stranger.

So, as you can see, we native English speakers used to follow this exact pronoun logic that Russian still does. In short, the differences between ты and вы are easy to understand if you have ever had the “pleasure” of being around LARPers for any length of time.

The only really complex thing about this ты/вы dynamic is that when you combine “familiarity + lack of respect” into one grammatical concept. It means that you use the same type of speech both when talking to your mom over tea and fighting a drunk guy outside of a bar. And so, strangely, in Russian, we speak to the people we love the most and hate the most на ты (using the “thou” form). Russia is a land of paradoxes.

Furthermore, Russians grammatically show much more respect for people who are unknown or more powerful than they are, even if they happen to distrust/dislike them. The “polite form” is reserved for those we don’t know or are fearful of, due to their status. One strange thing is that Russians use the ты form when speaking to God, meaning the creator of the universe gets less respect than your pencil-necked boss at work (вы form) from a grammatical standpoint. I’ve never understood this, but it is the way it is and in English it used to be exactly the same.

2. Thou hast... He hath… I have no idea why Russian verbs change so much!

Again, every native English speaker has watched some movie in a Medieval setting or has been forced to read Shakespeare in original at school, only to encounter strange constructions like “wouldst thou” or “what hath she done?” To our modern mindset, it seems like Medieval people spoke the exact same way that we do now, just sticking funny “Dark Age” sounds onto the ends of verbs.

As you might have suspected by now, Russian does this exact same thing till this day. Based on Wikipedia and way too many hours of rolling dice in my youth this ending system seems to break down something like this…

So from this chart we can see that there are certain obsolete English endings like ‘-est’ and ‘-eth’ that we can just slap onto the ends of verbs based on the pronoun. By doing this we can “conjugate” any modern verb into old-timey English with little effort - “Thou trollest those suckers” or “She flexeth hard with her Gucci purse”.

This concept of sticking endings on verbs that we stopped doing long ago, but sort of exists in our cultural memory as native English speakers, is what Russians do currently.

And just like with English, in Russian, this is done SYSTEMATICALLY. Many people get scared away from learning Russian, because they hear online that each word has this countless number of forms to memorize. This massive number of endings/forms per word is technically true, but all these forms come from sticking a short list of possible endings onto words. This is no harder than trying to shove -est and -eth endings on top of modern English verbs. Seriously!

For example, let’s go back to our word of the day: thou/ты. When using this pronoun all you have to do is slap the ending -ешь or -ишь onto the end of a Russian verb to make it work. THAT IS IT!

This fact will save you from wasting good money on a big “500 verb declensions” book. Making verbs agree with their pronoun in Russian is no harder than remembering these old-school verb endings in English, the only difference is in Russian you delete the -ть from the verb.

As you see, this verb changing concept is not that crazy or hard to understand, especially when it kind of remains in English! It personally enrages me at how poorly this is explained to new students of Russian online and was a big hill for me to climb over until everything “clicked”. There are things to brutally memorize in any language, but the way verbs decline is not one of them.

3. Russian is that, which is little understood…

Again going back to “old-timey” English, there seemed to be a certain level of formality in speech that we lack today. From the way Hollywood and video games project the Middle Ages, it seems like people were more proper and more wordy in their speech.

Today, we would say: “That’s the guy who stole the horse!” But very often, screenwriters will try to add Medieval flair with something more formal like: “That man was he, who stole the horse!” Or something like: “This sword is that, which shall conquer an empire!” This sounds more powerful and ancient than: “Yeah man, this sword will bag us an empire!” And at the core of the Russian language this ancient epicness is still alive and well.

The structure “...he, who...” and “...that, which...” are extremely common, if not default, in modern Russian. And you should really try breaking your sentences down into this sort of logic.

Вот этот с бородой, он - тот, кто украл печенье!
That one over there with the beard, it was he, who stole the cookie!

A BMW is that only car, which brings forth true respect, homie.

When you read Russian, you are sure to see тот, кто in many different versions, due to all the cases, but the main thing is to never be afraid to say things in a wordy or old-school sounding way in Russian. This is not only acceptable, but preferred. Russian is different and takes time to get used to, but this bridge for English speakers was vastly shorter grammatically in Medieval times.

Спасибо всем, кто прочитал эту статью до конца!
Thank you to those who read this article until the end!

I am happy that you (plural, polite) read my works!