‘Davai’ - the trickiest word in the Russian Language

Education
Benjamin Davis
An American living in Russia for three years continues to struggle with what he believes is the most horrible, puzzling word in the entire language: ‘davai’. With so many simultaneous meanings, it’s not hard to imagine why... 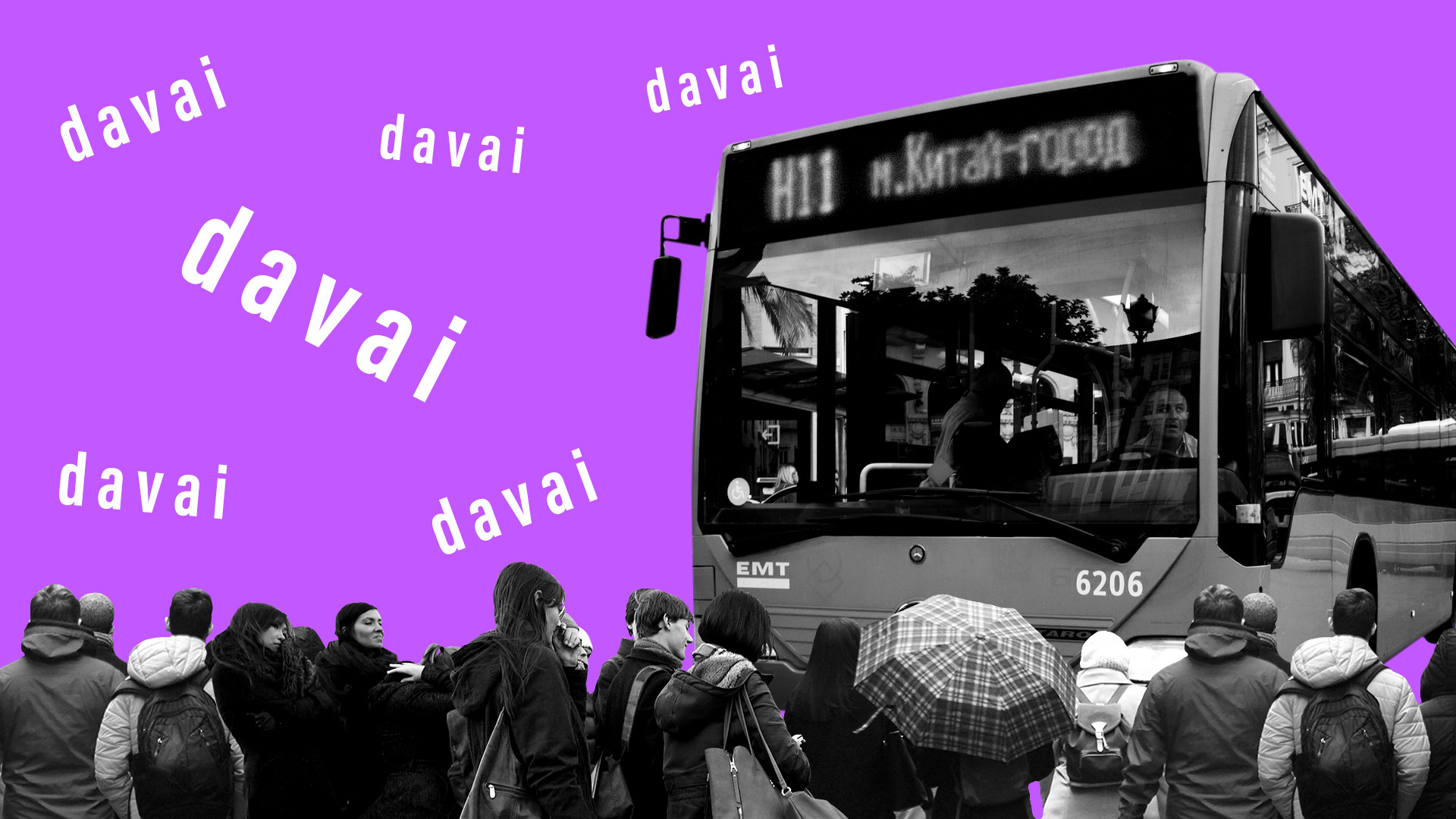 I worked at a children’s camp for a bit in 2018. There was a Russian version of one of those children’s toys in the back of the room that tells you the sound animals make: the cow goes moo, the chicken goes cluck, the cat goes meow, and so on. I picked it up and gave it a spin while the Russian teacher gave kids directions on the assignment they had to do. “The cow goes davai!” “The cat goes davai!” “The chicken goes davai! Poka Poka!” I stopped, looked around. I heard it again, “DAVAI.”

I followed the sound and to the head of the room. It turned out the toy was broken and what I was hearing was the teacher directing the students on how to complete the assignment. She told them to do this, get that, hurry up, then told one to go sit somewhere else, and said goodbye to another student whose mother came to pick him up. Each time, she said, “davai, davai, davai, davai.”

These are only a few of the ways you can use the word “davai.” It is one of the most versatile words I have heard in any language and it is the schizophrenic Crown Prince of Context. (“F*ck”, the king of context, is not dead yet.)

It is such a versatile word that there is a good chance you’ll use it right, but an equally good chance you’ll have no idea what you just said. For example, if you walked into Russia at any time of day, stepped into any conversation, waited a moment, and then said “davai,” any number of things might happen: they might hand you a cigarette, ask where you expect them to follow you to, appreciate you for agreeing to the excellent point they just made, or reciprocate the “davai” and walk off.

For Russians, “davai” is natural - no matter how it is used, Russians seem to understand exactly what each other means. It is like a pervasive linguistic magic trick that outsiders will need to spend a lifetime mastering.

Since Davai has so much to do with context, I thought it would be best to examine how it is used based on where you are rather than what you’re doing. 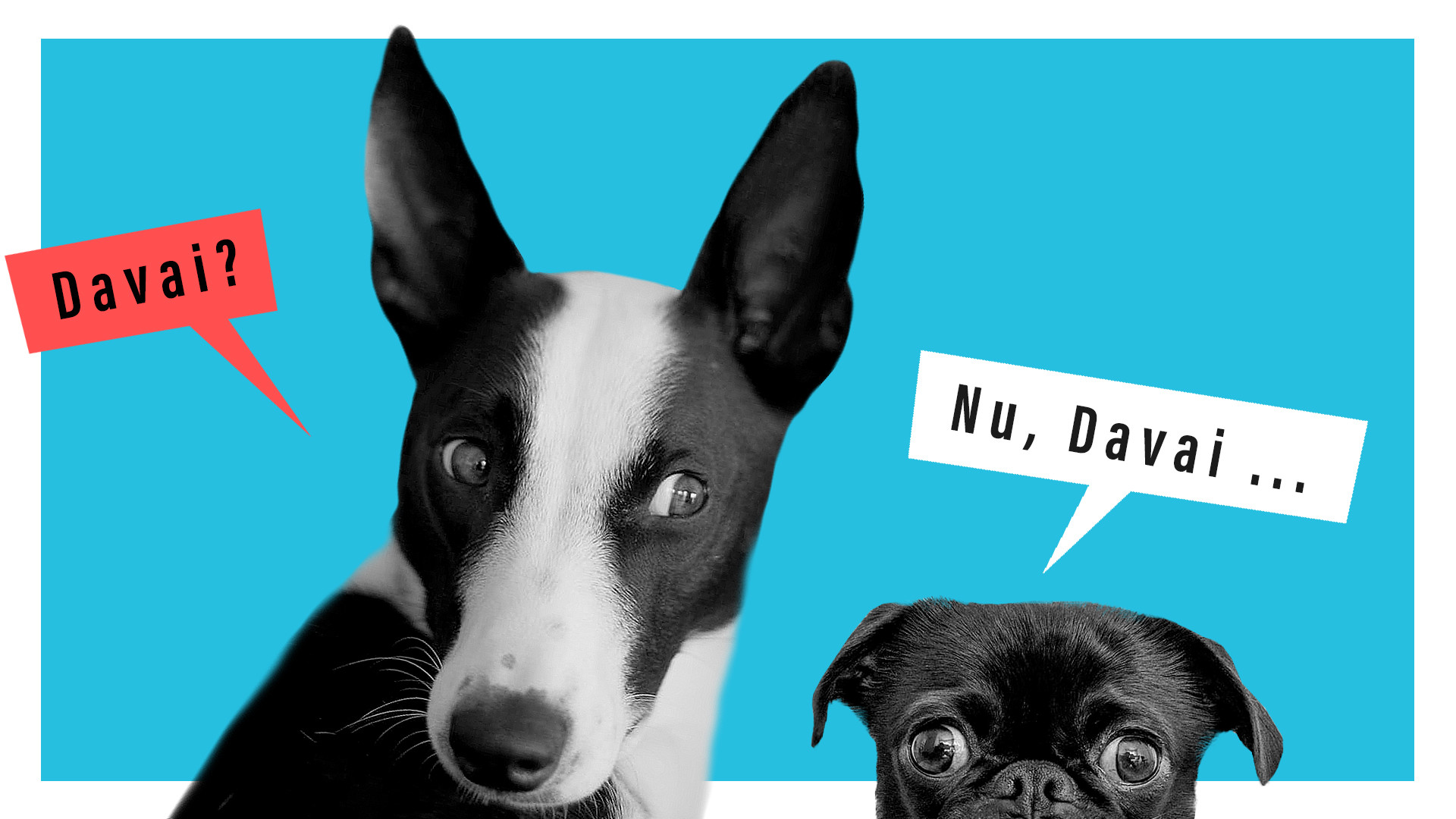 According to Nadja, a Saint Petersburg resident, “come on” is the most common usage of the word ‘Davai’. As well, she says, “Besides other meanings, давать in Russian can mean “to let someone have sex with you”, which implies the person who “lets” is being unenthusiastic/passive/uninterested in the process.”

Nadja, thought for a moment, and told me, “Wow, actually as you put it here, this ‘da, davai” can sound pretty enthusiastic too.” Then added, “Damn this Russian language is so complicated.”

There is no truer statement; if the new alphabet doesn’t scare foreigners off, and they master the noun cases, Russian still has its last line of defense: ‘davai’. This little word could be used throughout the whole playful process of a couple’s evening:

As things progress and the person becomes more interested, no longer sleepy, they might say, “Ooo, DA, davai!”

If we give that situation some privacy for a moment, it isn’t the only time davai might be used in the bedroom. For example, the next morning, Nadja tells me, the person who woke up first, might go make breakfast, come back and say, “Nu davai vstavai uzhe, pora prosypat’sya» (“Ну давай вставай уже, пора просыпаться.” – Come on, get up) then they might say, “Breakfast is getting cold, davai idi esh’ (“давай иди ешь” - come on go eat”).

When used as “Come on”, davai is often followed up with an action verb of some sort to indicate literally anything you might want them to do. In this way, you might find davai – when its solo usage is too abrupt to be understood – being clarified. Yet, when davai is pulled out, you should always be on guard for context since Russians will often understand perfectly well, leaving you to drown in the sea of ambiguous ‘davai’s. 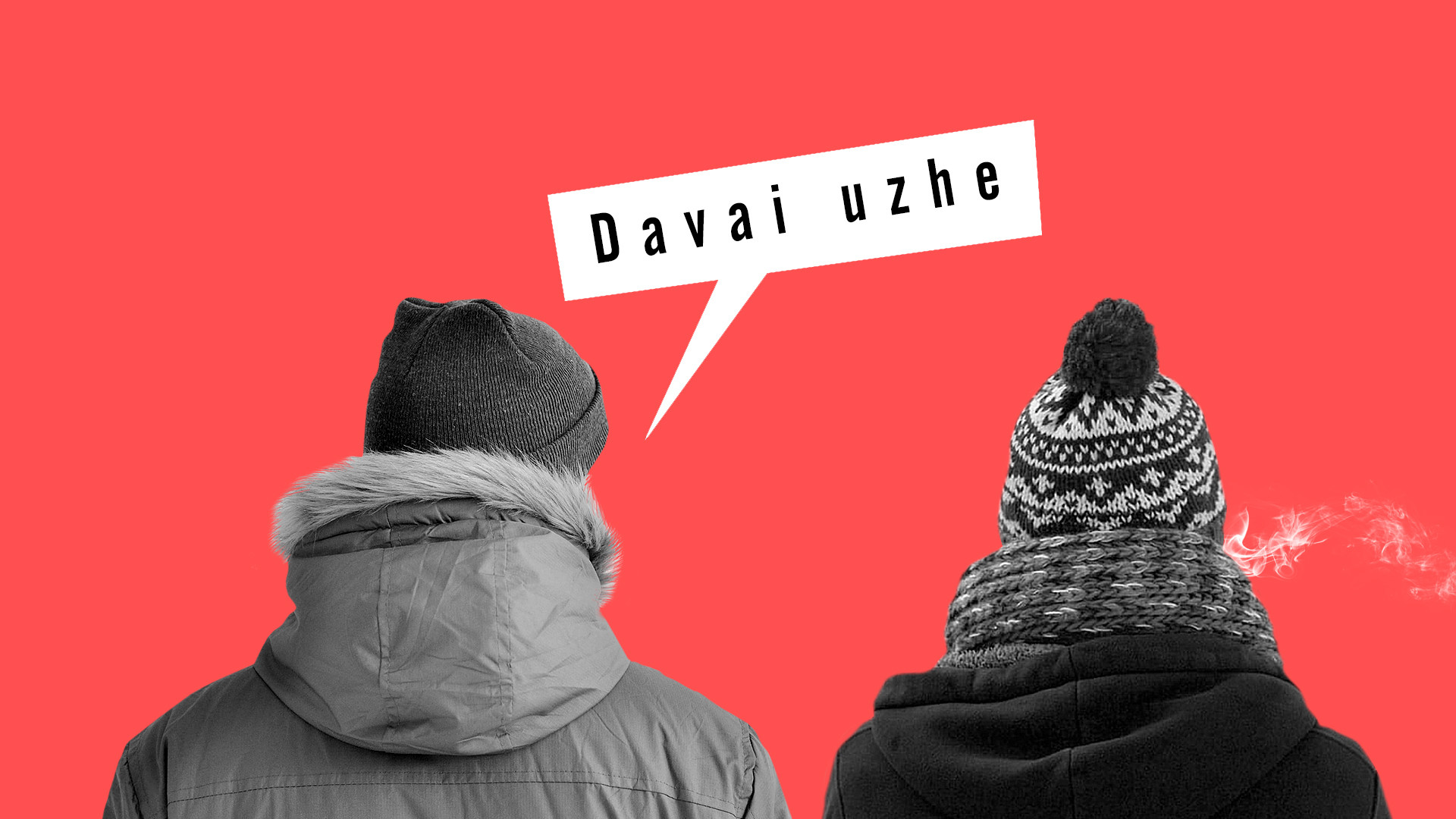 Say you’re with a friend and he says, “Давай по пивку” (let’s get a beer.”) So, you find yourself in a bar. You finish the first and ask your friend if he wants another round and he says, “Davai.” But first, he wants a cigarette so he stands and says, “First let’s have a cigarette, davai, outside,” and, once you're outside, your friend realizes they forgot their cigarettes. “Can I have one? They ask. “Sure," you say. Then, as you take out your pack, you’re suddenly distracted by a flock of seagulls squawking as they fly overhead. “DAVAI, DAVAI, DAVAI!” You hear them say, echoing through the alleyway. When you turn back to your friend you realize that they, too, are saying “davai," motioning to the pack in your hand. “Davai, they say as in: Hurry up, man—it’s cold out here. You come to your senses and pass one over...

You finish your cigarettes in silence. Your friend finishes first, you’re taking forever and he wants to go inside so he says, “davai uzhe” (“давай уже”, go already) waving at your cigarette. “Hurry up” is what he means, but you decide this friend is kind of a rude guy. So, you tell him that on second thought you’re going to head home and so he shrugs and says, “vsyo, davai, poka" (Alright then, goodbye / всё, давай, пока).

That’s the thing about davai – it is a word like a rude little brother. It is always shoving itself in between other words, rarely caring if anyone wants him there or if it’s an appropriate time. Other words put up with him because words are mouth prisoners and they have no choice in the matter. 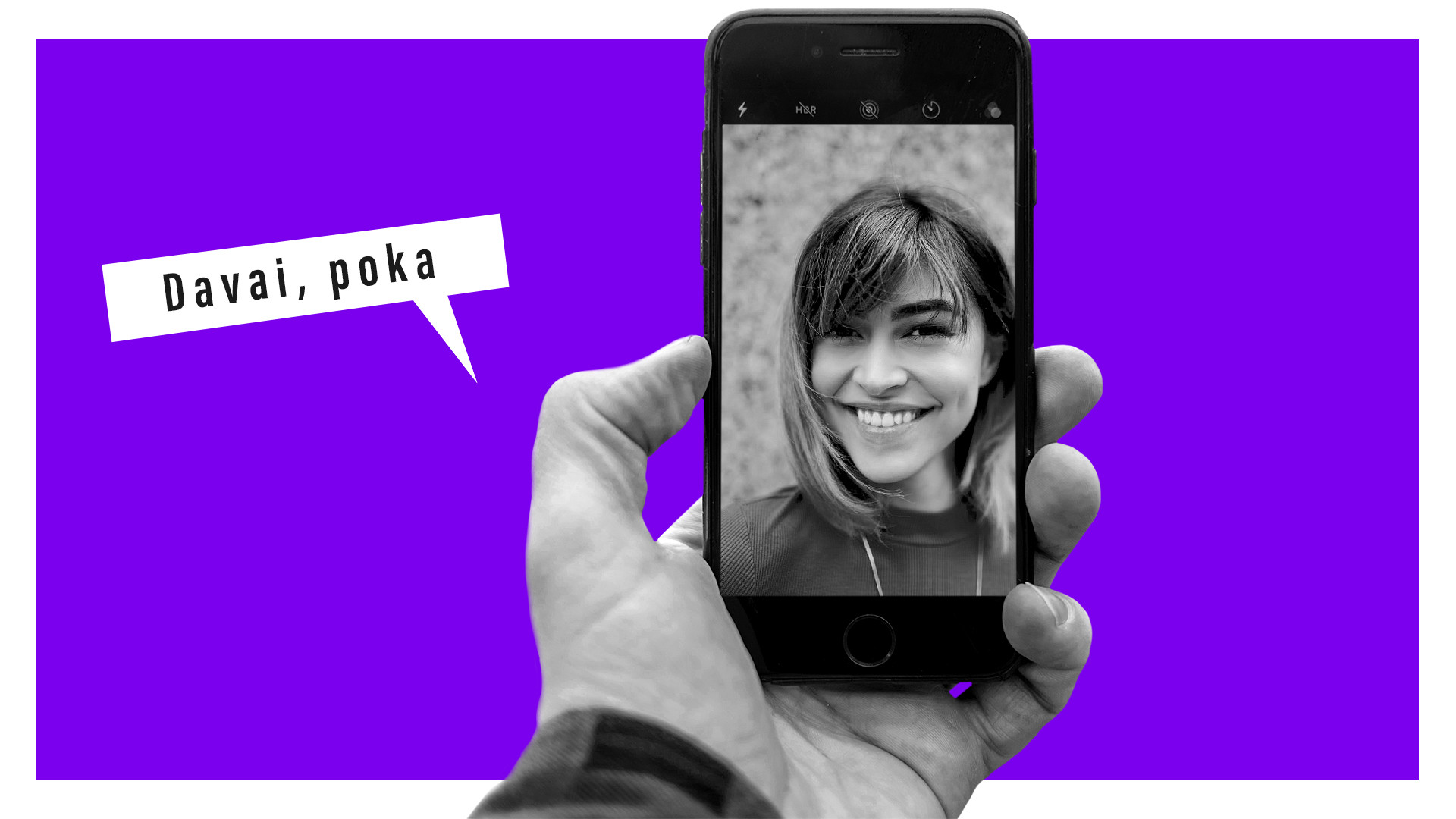 You leave the bar, and as you’re walking along, you hear something from behind you. That can’t possibly be another person saying “davai,” you think. And yet, it is.

Mike Cactus, a Moscow resident says he mostly uses it to make someone in front of him move faster, or as a casual form of encouragement. So, if you’re walking, you get a phone call, and slow down to pick it up, someone behind you might say, “davai-davai-davai!” to get you to speed up. Which is far kinder than in Moscow’s American sister city, New York, where you’ll mostly get a, “Hey buddy, get the f*ck out of my way!”

Once on the phone, you might tell the person you’ve got some juicy gossip (though I rarely run into Russians as fond of gossip as Americans) and the person might say, “nu davai” to mean, “come on, spit it ou” and you start to tell them the story but then they start shouting at their television “DAVAI! DAVAI! DAVAI!”

Their favorite football team is playing and they’re cheering on their star player who was taking the ball up the field to score.

“I’m so tired of this freaking word!” You yell into the phone.

And your friend says, “What word?”

And your friend, assuming you’re saying goodbye to him also says, “davai,” then hangs up.

And then your brain explodes.