The Tsar Cannon: A gigantic gun designed to defend the Kremlin 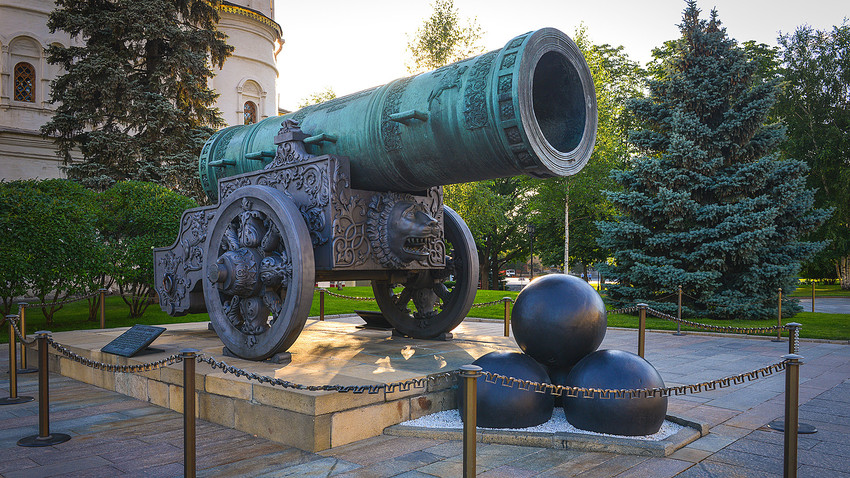 Tsar Cannon at the Kremlin.

Nikolai Galkin/TASS
The Tsar Cannon actually deserves its pompous name—it is the biggest cannon in the world. This piece of royal artillery was built to defend the Kremlin, and it has been located there for more than four hundred years. There are rumors that the cannon has never been fired, but this is not true.

The Tsar Cannon at the Moscow Kremlin is designated in the Guinness Book of Records as the largest bombard (a late medieval cannon used to hurl large stones) by caliber in the world. It was designed to shoot cannonballs that each weighed 800 kilograms. The cannon itself weighs almost 40 tons and takes 200 horses to transport.

The Tsar Cannon’s caliber is 890 millimeters. Larger artillery weapons do exist, such as the Mallet’s Mortar in the United Kingdom and Little David in the United State, which both have calibers of 914 millimeters. However, these weapons are mortars, not cannons, and that means the Tsar’s Cannon at the Kremlin is an unsurpassed piece of artillery.

It’s also worth keeping in mind that the mortars were produced in the 19th and 20th centuries, with the use of (relatively) modern technology, while Cannon was cast in bronze and dates from 1586. The cannon was made by the Russian bronze caster Andrey in Moscow.

Chokhov made this grand cannon during the reign of Tsar Fyodor Ivanovich, a son of Ivan the Terrible. There is an image of the tsar on the barrel of the gun. He is depicted with a crown on his head and a scepter in his hand, sitting on horseback. There is an inscription above the figure of the tsar that says “The grace of God, Tsar and Great Duke Fyodor Ivanovich, Autocrat of all Great Russia.” There are two other labels, one tells us who made the cannon, and the other specifies that it was made at the tsar’s request.

There is a theory that the cannon received its name because of this image of the tsar. However, it’s more popularly believed that the name is instead connected to the massive size of this weapon, something that was absolutely extraordinary for the time.

Did it ever fire a shot?

Some people have argued that created his cannon as a way to impress foreigners with the alleged might of the Moscow state, not to be used as a real weapon. According to this theory, the cannon was not meant to be used and has never even fired a shot. However, in 1980, while the cannon was being restored, it was inspected by specialists from the Artillery Academy. They found some gunpowder residue and came to the conclusion that the cannon had been fired at least once.

The information we have about the way Cannon was used also contradicts the theory that it was produced solely for propagandistic purposes. The cannon was mounted on a special frame and placed in Red Square. It was supposed to be used to defend access to the Kremlin from the east, but it was never used in any real fighting. In the 18th century, the cannon was moved to the Kremlin Arsenal.

During the Napoleonic Invasion in 1812, there was a fire in Moscow and the cannon’s wooden carriage was destroyed. Later, the current cast-iron one was created. It was at this time that the cannonballs that now sit in the front of the weapon were also made. These cannonballs are purely decorative and are too large to be used, even with Cannon.

In addition to Cannon, there is also a Tsar Bell. Soon, Russia Beyond will tell you the story of this other fascinating piece.