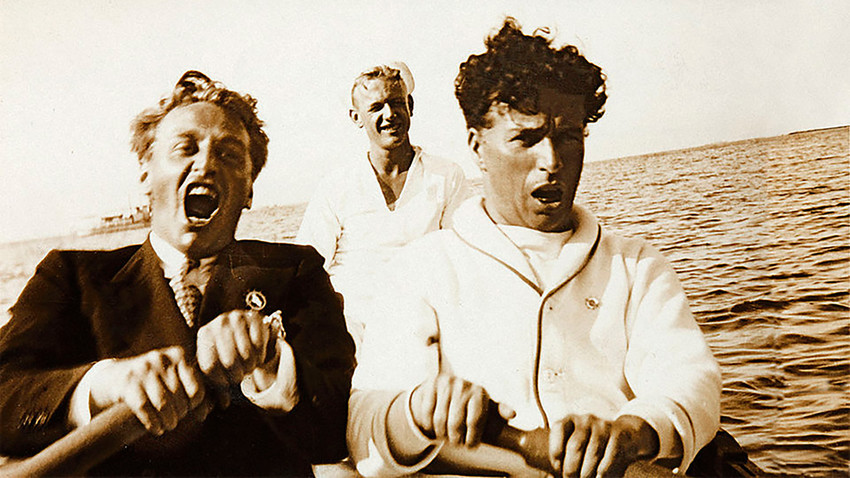 Personal collection of Alexander Dobrovinsky
This photograph, taken in America in 1930, shows famous friends belting out a Russian song as loudly as they can - and the occasion would inspire a much-loved film.

Sergei Eisenstein's Battleship Potemkin is regarded as one of the greatest movies of all time, but not many people know its success sparked a relationship between the Soviet scriptwriter and director Grigory Alexandrov and U.S. actor Charlie Chaplin.

When the film received international recognition in 1925, Alexandrov, Sergei Eisenstein, and cameraman Eduard Tisse were sent to America to build bridges with foreign cultural figures.

The directors remember meeting famous actors in Los Angeles, including Charlie Chaplin. Alexandrov immediately befriended him, and Chaplin himself remembered the Soviet directors’ visit in his memoirs: “I met with them very often. They joined me on the courts to play tennis.”

One day Chaplin invited his new acquaintances on a boat ride. In the book Epoch and Cinema, Alexandrov wrote that it was a wonderful day. Himself, Chaplin, Eisenstein, and a sailor all journeyed out on the sea and while swimming Alexandrov sang the famous Russian song, “Volga-Volga, native mother, Volga – Russian river.” Chaplin, who liked the song’s melody immediately, started to sing along. In his memoirs, the Soviet director wrote that Chaplin was so impressed by the song that he suggested they make a movie about the Volga: “It’s such a great river! Just like our Mississippi. You can find a lot of wonderful stories to illustrate the river, and the people living around it.” After a few years, Alexandrov used this idea to make the film Volga-Volga.