Blessed Basil, the man who got away with scolding Ivan the Terrible 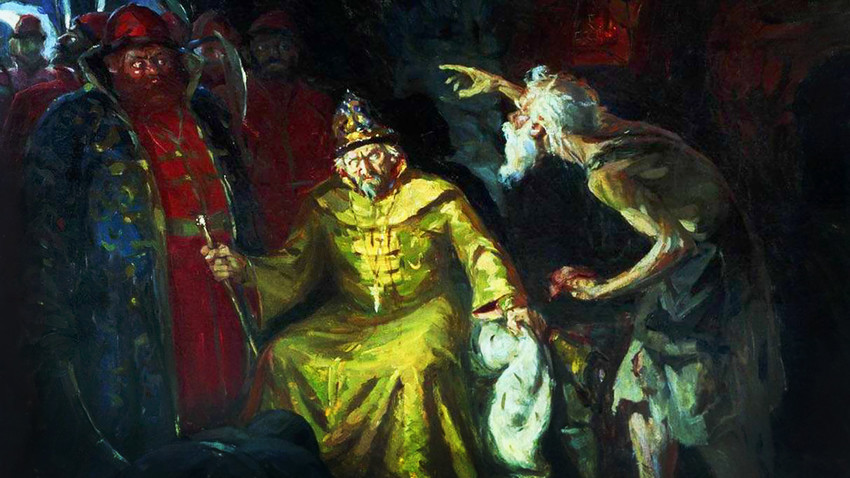 Andrey Ryabushkin. Ivan the Terrible (1903)
St. Basil’s Cathedral is perhaps Russia’s best-known symbol, but few people know about the man the cathedral is named after. A medieval “holy fool,” he was widely revered in Moscow for his piety. He was also the only man who could reproach and even scold Ivan the Terrible — and get away with it.

Giles Fletcher, an English ambassador to Russia in the 16th century, wrote that in Moscow he had seen “certain eremites (whom they call holy men)... They use to go stark naked save a clout about their middle, with their hair hanging long and wildly about their shoulders, and many of them with an iron collar or chain about their necks… even in the extremity of winter. These they take as prophets, and men of great holiness, giving them a liberty to speak what they list without any controlment... So that if he reprove any openly in what sort soever, they answer nothing but that it is for their sins…”

In this excerpt, Fletcher describes “fools for Christ,” people who chose constant piety as a way of life and to express their worldview. Blessed Basil was one of these—probably the most prominent one in Russia. 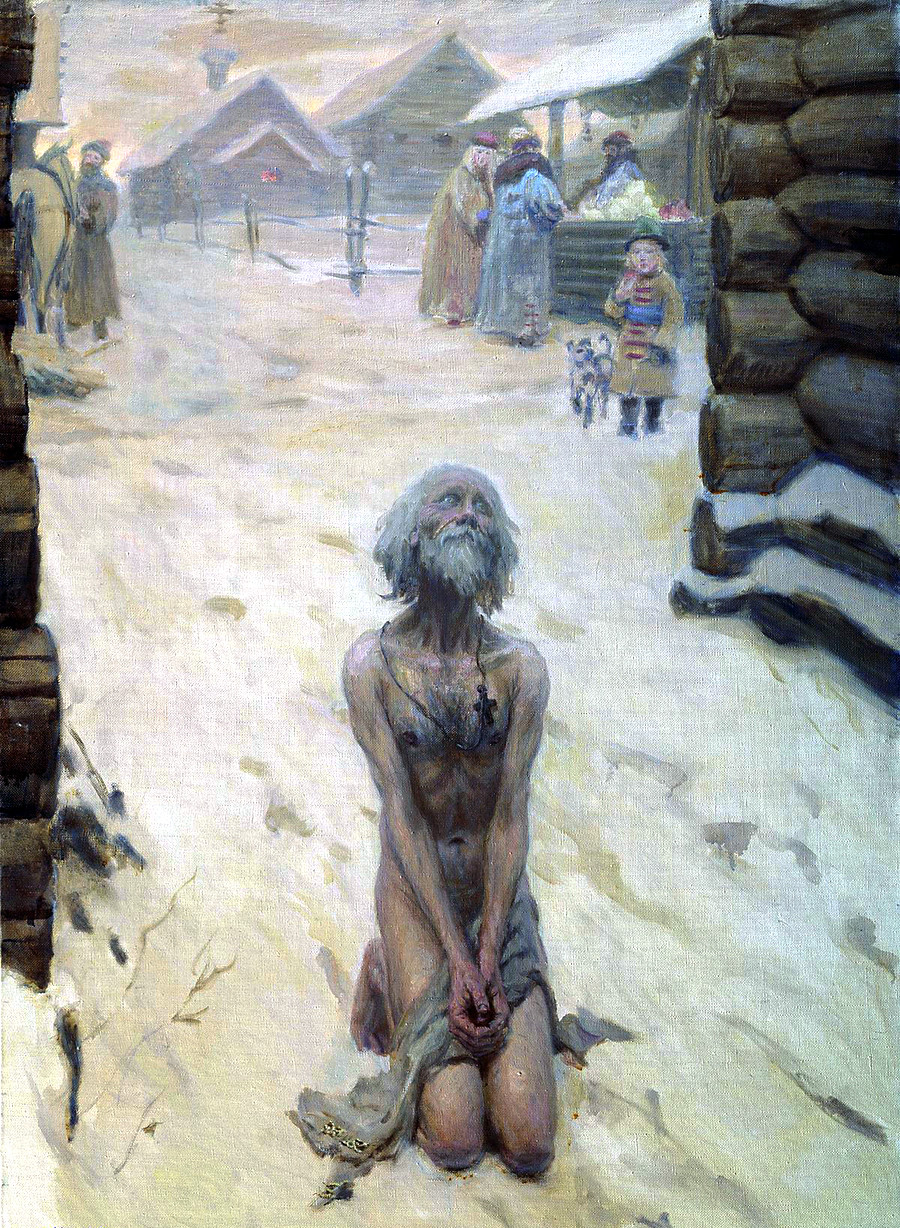 Basil (Vasiliy) was born around 1469 in Moscow to an ordinary and poor family. His parents sent him to study to be a shoemaker. One day, a merchant came in to order a pair of boots “that would last long.” Basil cried and explained to the shop owner that the merchant wouldn’t even get to put the boots on since he would die very soon, which did indeed happen two days later. That’s when Basil’s clairvoyance revealed itself.

At 16, Basil left his home to become a fool for Christ. Naked in all kinds of weather, he roamed the streets of Moscow, praying constantly and doing seemingly foolish things that had a deep meaning behind them. A half-legendary biography, written after his demise, tells of Basil’s escapades. Walking through a marketplace, he’d often break jugs of kvass or overturn trays of bread. Later, it turned out that the kvass was stale and the bread had been baked poorly. As such, the merchants didn’t take offense. On the contrary, when Basil took any food from them, they considered it to be a blessing.

Basil is said to have predicted a major fire in Moscow in 1547. Days before the fire, he was seen praying wholeheartedly before one of the churches and crying. People said they had heard noise and seen images of fire overtaking the church. After the fire actually occured, Basil gained even more attention.

Legends also attributed to Basil the ability to walk on water and to heal the blind. It was said that he turned blind three women who had made fun of him for his appearance, and then healed them on the spot after they pleaded to him. Some actions he is said to have repeated many times were throwing stones at the walls of pious people’s houses “to drive away the devils” and crying near brothels and drinking establishments, saying he was “desperately pleading the angels to save the sinners who inhabit these places”.

Basil’s fame in Moscow grew rapidly. Even the tsar himself, the notorious Ivan the Terrible, would heed Basil’s words. Once, the holy fool was invited to the Kremlin on the name-day of the tsar. He refused three times to drink to Ivan’s health, pouring his drink out the window instead—a great insult. When the tsar, infuriated, asked why Basil scolded him in such way, he answered that he was putting a fire out in Novgorod and then ran out of the palace. The tsar sent a messenger to Novgorod only to find out that, at the exact time of the feast, a huge had fire started, but an unknown naked man had appeared and started putting out the fire with water from his cup.

Tales and rumors often relate to Basil cursing and scolding the tsar in public or giving him raw meat and blood, saying “That is your food and drink,” after a massacre Ivan instigated in Novgorod in 1570. The only problem here is that Basil died around 1557, years before the Novgorod massacre.

How real was Basil? 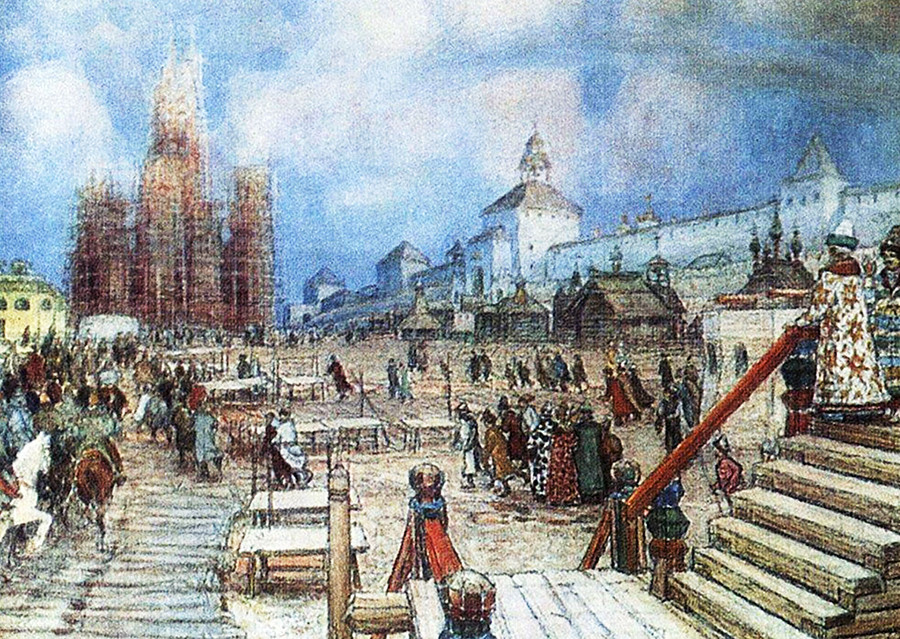 For historians, there are many chronological and factual flaws in the story of Basil’s life. It now seems that in his hagiography the traits and stories of several different “fools for Christ” have been comprised into one. What is definitely true though is that Basil was respected by the tsar and his family. When Basil was already very old and close to death, Ivan came to visit him with his wife, Anastasia, and his sons, Ivan and Fyodor. Basil predicted Fyodor would be the next tsar, which did eventually turn out to be correct.

When Basil died, the tsar himself came to bear his coffin, and the funeral service was held by Macarius, Metropolitan of Moscow. In 1588, during reign of Fyodor, he was beatified by Job, the first Patriarch of Moscow, and his remains were transferred to the Pokrov Cathedral, which has since then born the name of Saint Basil the Blessed.

His sanctuary became a place of pilgrimage and prayer. Usually, people would pray to be healed, especially of diseases relating to eyesight—there are reports that silver eyeballs were often placed near his sanctuary as signs of gratitude for the miraculous healing that prayers to St. Basil brought to the pilgrims. St. Basil’s memory day is August 15th, and to this day the Patriarch of Moscow holds an annual service in his memory in the cathedral.