Why did Russia pass up on two different chances to take Constantinople? 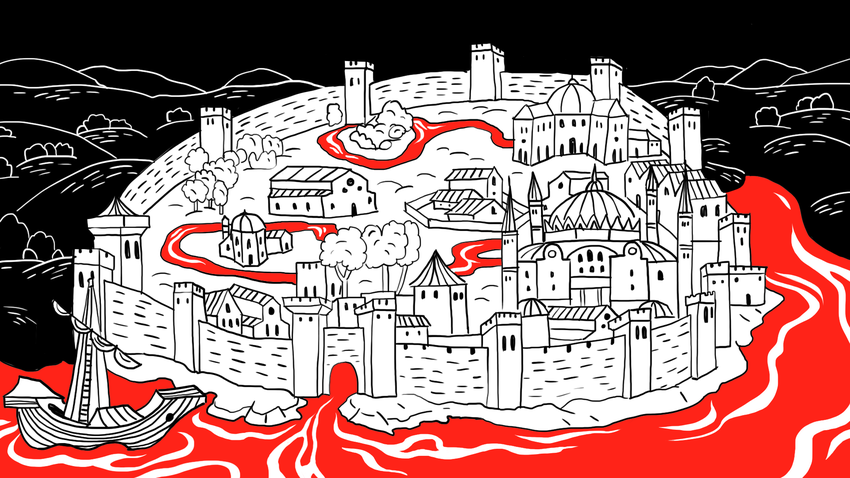 Why did Russia pass up on two different chances to take Constantinople?

Natalya Nosova
In the history of its numerous attempts (there were more than ten of them) to capture the ancient capital of Byzantium, there were several times that Russia was just a step away from realizing its longstanding dream of taking the city. And yet, each time it chose not to.

For centuries, Russia dreamed of controlling the straits of ancient Constantinople—then the capital of the Byzantine Empire, nowadays known as Istanbul, a city that connects Europe and Asia. The city was both the key to geopolitical domination in the Middle East and the shortest route from Europe to India.

Catherine the Great wanted Constantinople so badly that she even named her grandson Constantine (the name of Byzantium’s first and last emperor). She wanted to install him as the ruler of a resurrected version of the empire.

“What will happen to us and our establishments, if one woman possesses a piece of the world from Siberia to Egypt? Save yourselves,” the Italian philosopher Alessandro Verri wrote in the 1770s (link in Russian).

However, the numerous attempts to capture the city were not always guided by just strategic reasons. In Russia, the city was also called Tsargrad and considered the historical center of the Orthodox Church. The Hagia Sophia Cathedral, which the Turks had transformed into a mosque, stands in the city to this day. The wars Russia waged the Ottoman Empire were characterized as missionary crusades with the goal of freeing the Orthodox world from the Muslim Yoke.

But Russia never annexed the city, even though in its history it had two chances to do so almost without impediment.

Constantinople vs. repair and tax benefits

In 907, according to the Russian chronicles, Prince Oleg was the first Russian leader to successfully arrive at the gates of Constantinople. Nicknamed the Prophet due to his legendary foresight, he was an outstanding military leader whose campaigns laid the foundations of the Ancient Rus state and its borders. Therefore, had he made a different decision in the end, there is little doubt that Constantinople would have become a part of Rus.

The chronicles say he attacked Tsargrad with infantry and a 2,000-vessel fleet, although historians believe the number was smaller. The Greeks closed the gates, so the bloody massacre took place on the outskirts of the city.

“And many Greeks were killed in the periphery, and many tents were destroyed, and churches burned. And of those who were taken , some were cut up, others were tortured, and more were shot and some thrown into the sea, and much more evil did the Russians do to the Greeks, as enemies usually do,” says the chronicle.

But having taken Constantinople, Oleg realized that a peace agreement would be more beneficial for Rus than further expansion. Therefore, according to the legend, the prince nailed his shield to the city gates, signed an advantageous trade agreement with Constantinople and took a hefty payout. After that, Russians could live on the outskirts of the capital for half a year without paying taxes, trade and enjoy the right to free food and boat repair at Byzantium’s expense.

Catherine the Great called her plans to reestablish the Greek monarchy the Greek Project. It did not foresee direct Russian expansion, but rather the creation of a new state with the ancient name of Dacia and the expansion of Russian influence. The plan included eventually banishing the Turks from Europe, liberating all Balkan Christians from the Muslim Yoke and, of course, capturing Constantinople. But the Greek Project died in the end. The empresses did not find enough support in Europe, and Constantinople was soon forgotten when yet another Russo-Turkish War erupted (and Russia annexed Crimea in 1783).

However, Catherine’s third grandson, Emperor Nicholas I, came even closer to making her dream come true. In 1829, the Russian army entered Adrianople (present-day Edirne), 240 km from Istanbul. It would have taken two days to traverse this distance, and most likely the city would have fallen since by that time the Ottoman army was worn out and exhausted. But Nicholas made a deal with Sultan Mahmud II. After making some lofty proclamations about friendship—which would be forgotten just 12 years later—the Ottoman Empire closed the strait to other countries.

However, there was another, more substantial, reason behind Russia’s generous gesture: It was not at all clear what Russia would do with Constantinople after capturing it. Russia did not have enough resources to maintain the new territories, and leaving a victorious army in poverty in the seized city would have led to a rebellion. Moreover, capturing Constantinople would have meant reconfiguring all of southeastern Europe and could have easily lead to a world war because England and France would not have accepted such a development , it was easier to not make any claims to the city and settle the issue with an advantageous peace treaty.

I would later hear many complaints about not using the opportunity to take Constantinople. He responded to such complaints by saying he was happy that the only thing he and Catherine the Great had in common was a “profile of the face.” He did not like his grandmother’s way of governing.

If you want to know why Russia is so big, click here.