Scary bear and octopus: How Russia is shown on historic humorous maps of Europe

History
Russia Beyond
Have you seen pictures like “How Americans see Europe,” showing a map with funny country names? European caricaturists of the late 19-early 20th century were much more creative! 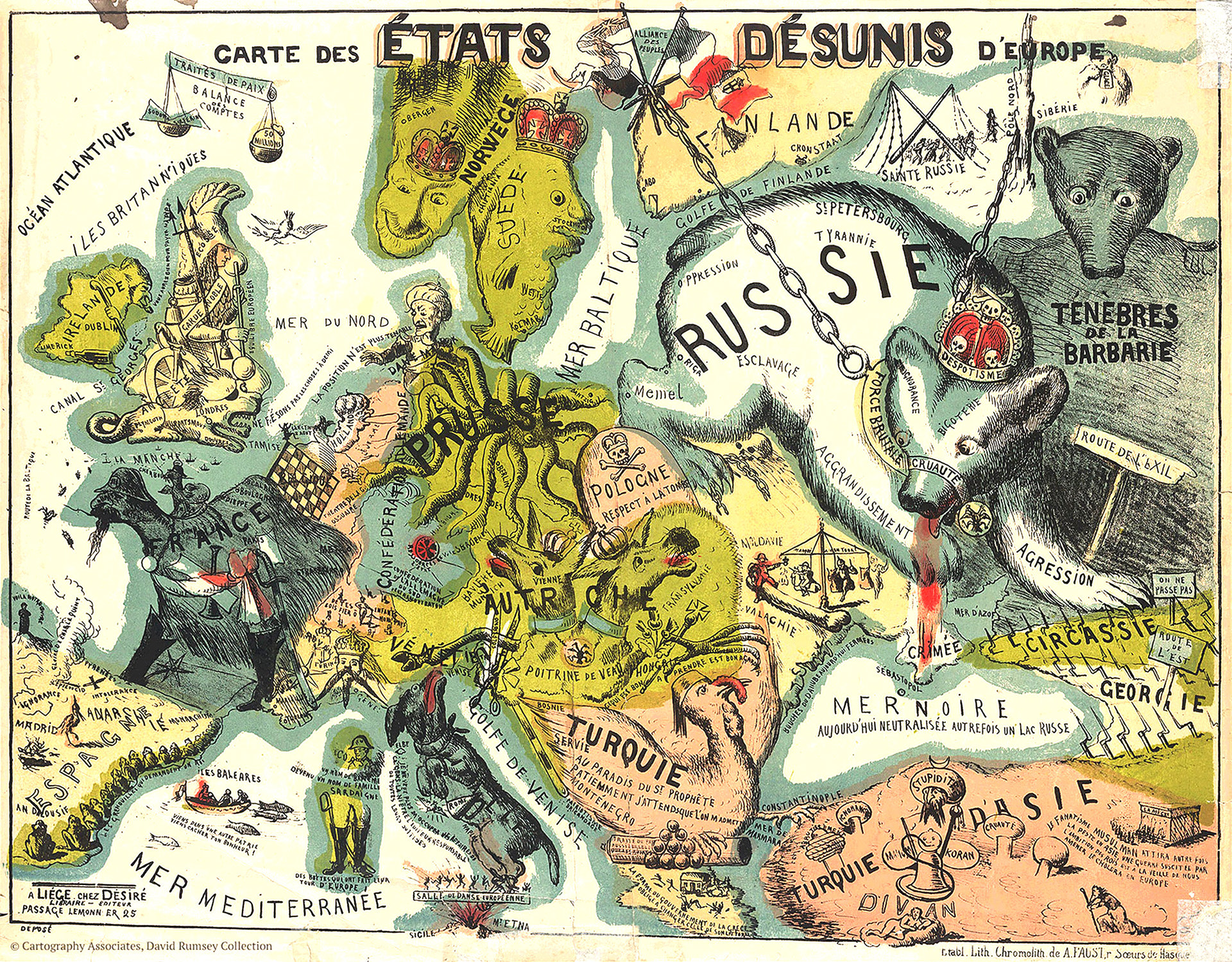 Unsurprisingly most maps depict Russia as a bear. On this map drawn in Belgium in 1864 after the Crimean War, Russia is shown as a bear in shackles. A coalition of the Ottoman Empire, France, Britain Sardinia managed to defeat the "bear" resulting in Russia losing some territories and its Black Sea fleet temporarily banned. 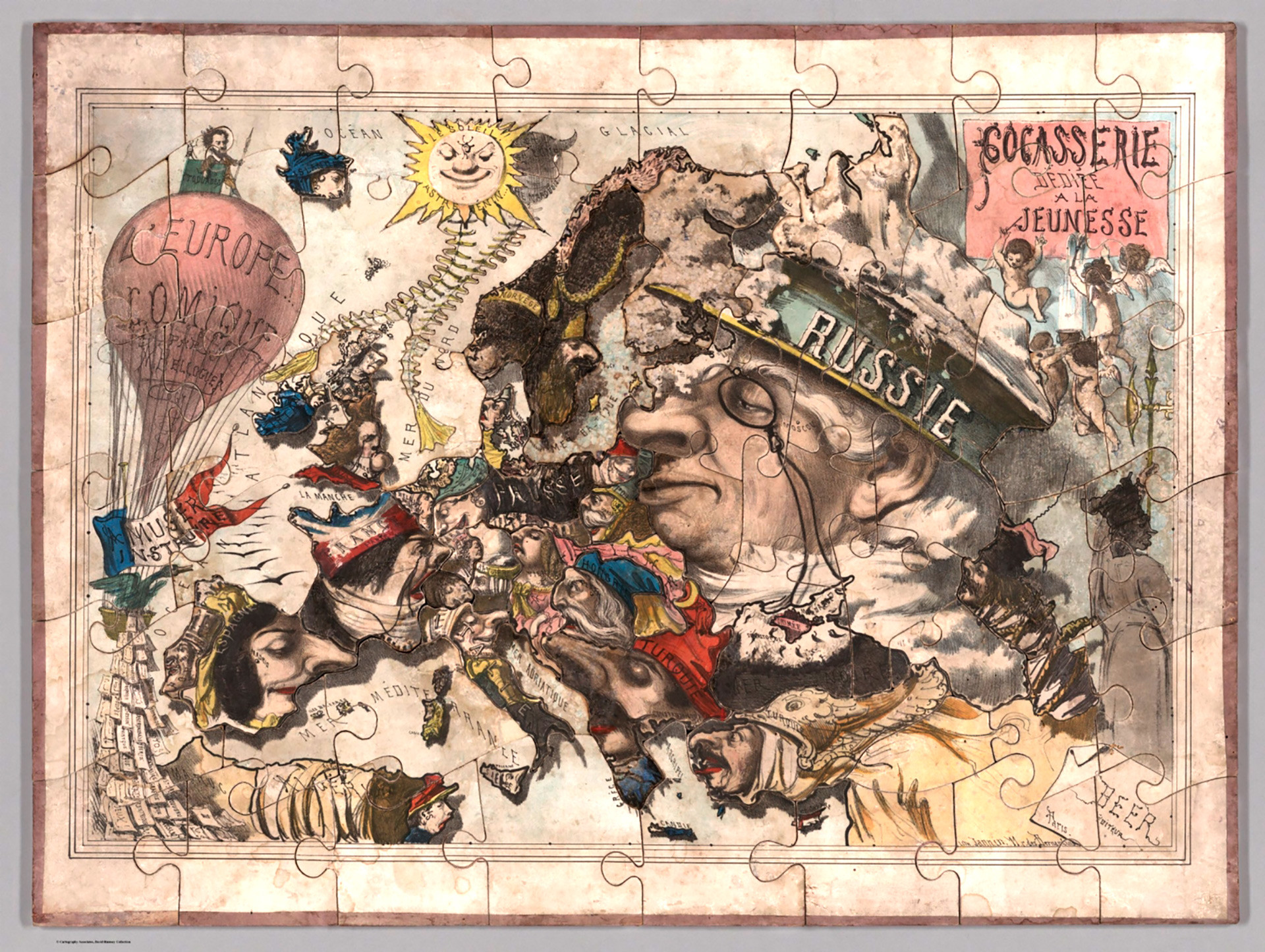 This is the L’Europe Comique (Comical Europe) map by Andre Belloguet, showing expressive faces roughly following the established boundaries of Europe at the time. This is a rare example where Russia is not shown as an but as a cultured and erudite gentleman. "This may perhaps symbolize Russia’s growing cultural self-expression in the fields of literature, music and the arts," the publisher says. 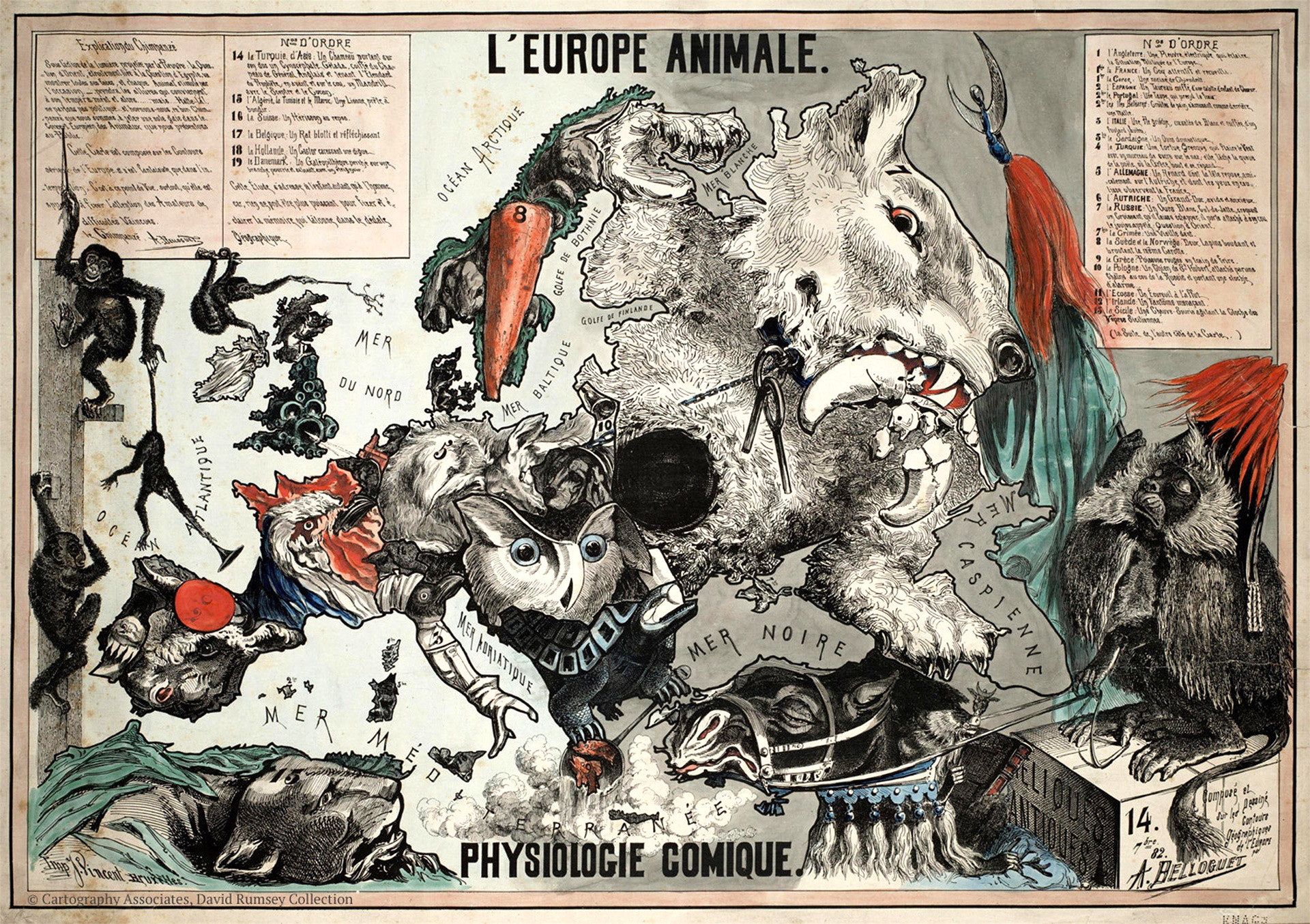 L’Europe Animale (Animal Europe) is another satire of Belloguet, dated 1882. Europe is depicted as a mad menagerie. 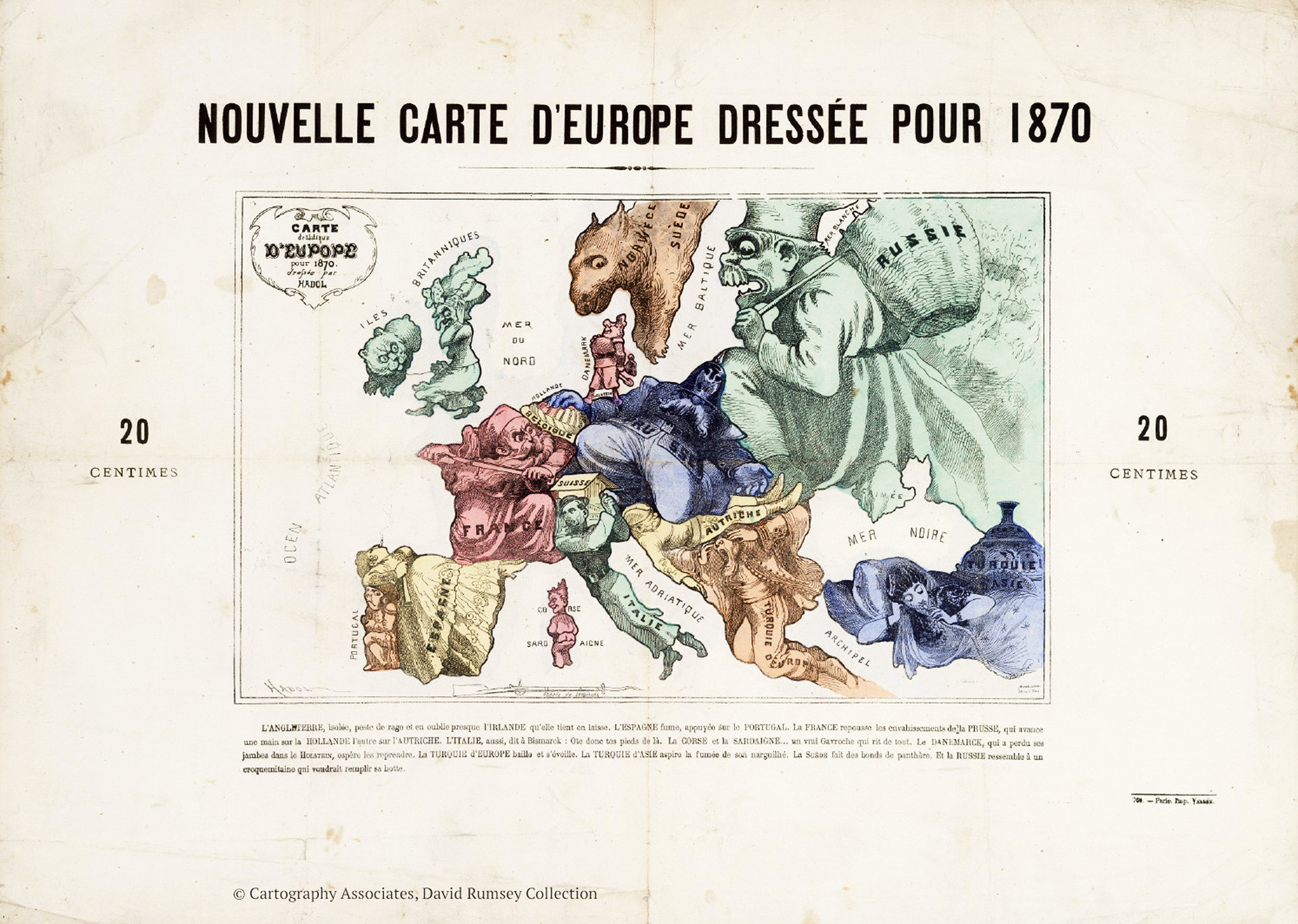 This map shows Europe on the eve of Franco-Prussian War of 1870. While Prussia is a fat man that is going to burst, Russia is shown as an angry man who is only bothered with how to fill his basket. Other countries are also interesting: England is an old witch, holding its dog Ireland on a leash, while Switzerland is situated between two opponents is a house without windows or doors, symbolizing its neutrality. 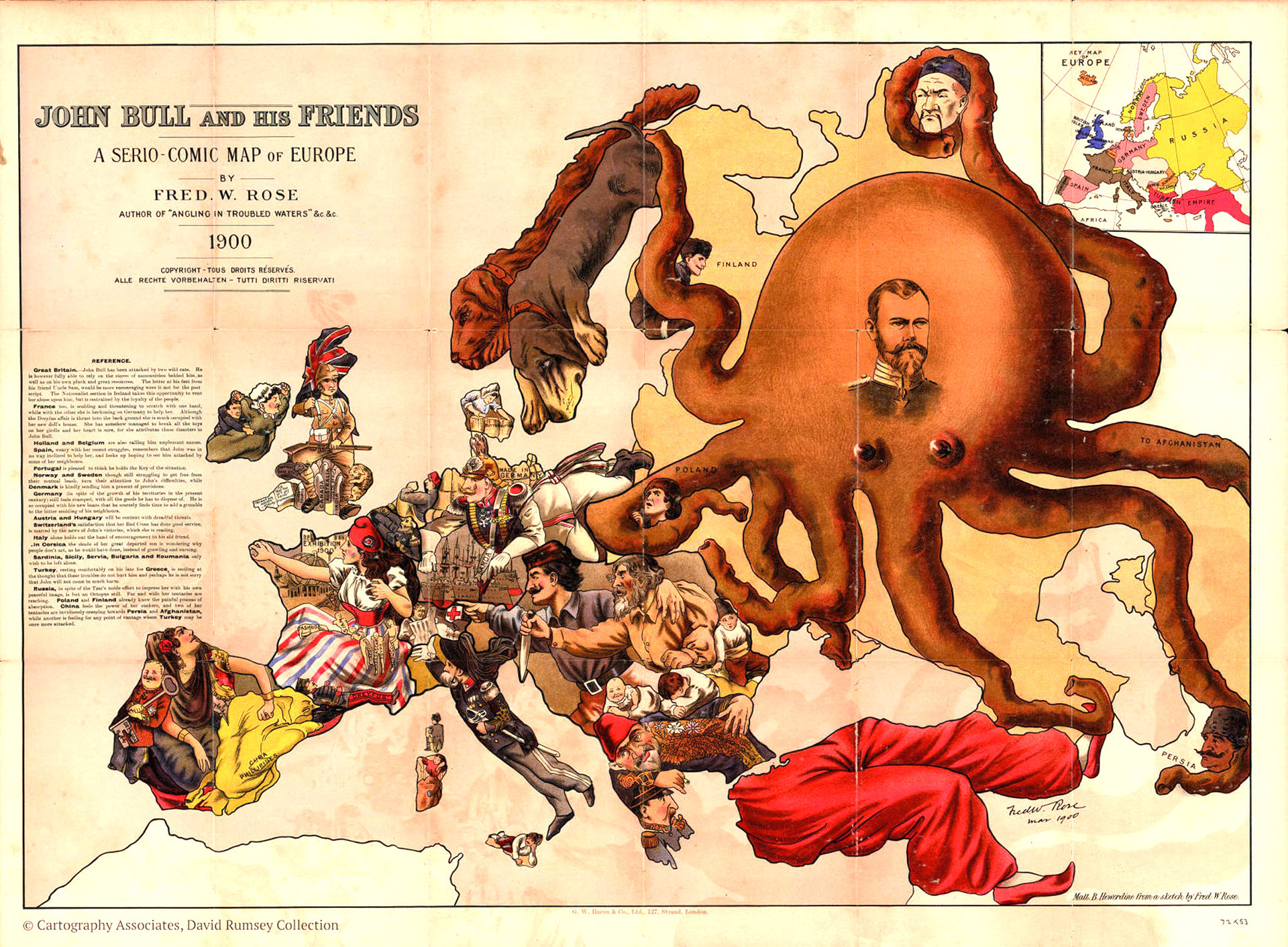 It's interesting to see how artists from different countries showed the situation in Europe. This map drawn by an Englishman depicts Great Britain as brave soldier John Bull. Russia is a scary octopus with a head of Nicholas II, stretching out its tentacles to China, Persia, Poland Scandinavia. 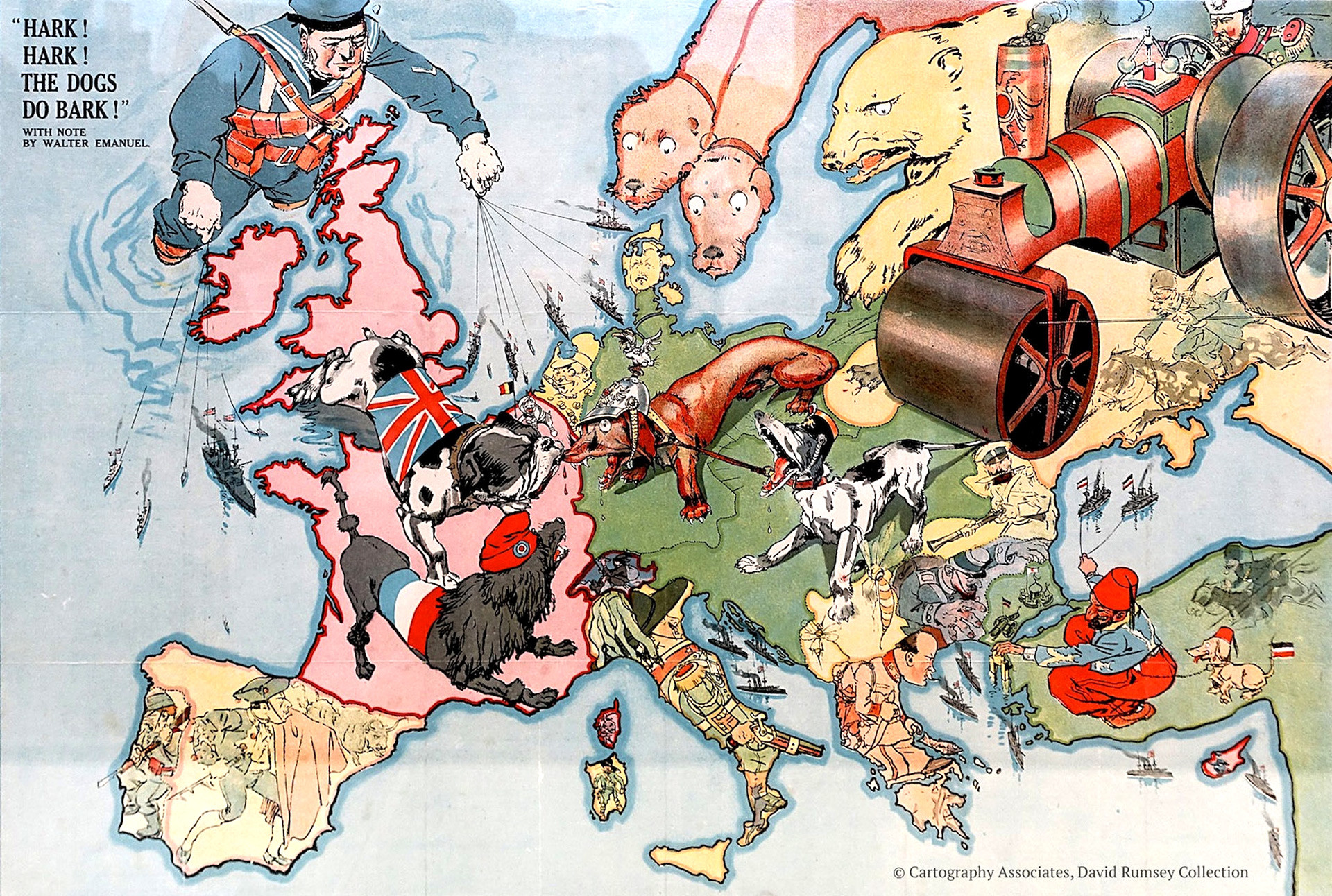 The First World War changed artistic attitudes. Some countries here are shown as angry barking dogs that are going to tear each other apart, with a dachshund Germany as the center of all. Surprisingly Russia is not only an aggressive but a steamroller that is just about to crash through Europe. 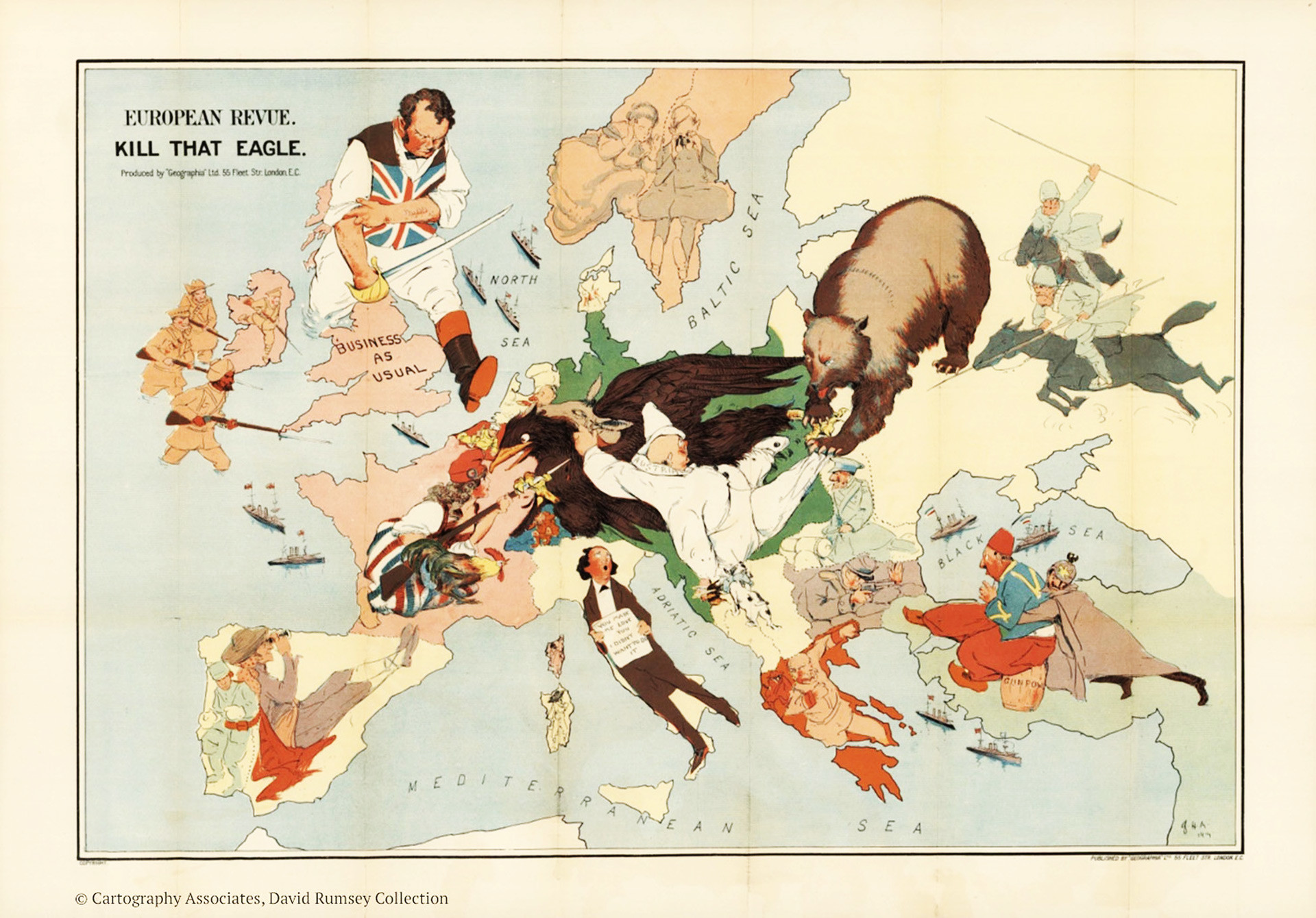 Another map shows a German eagle surrounded by big and powerful England, a scary Russian bear (which is already holding an Austrian clown in one claw) and a French woman wielding a bayonet.  Interestingly Turkey is pushed to fight on the side of Germany as well as Italy, which is even singing a popular song “You made me love you.” 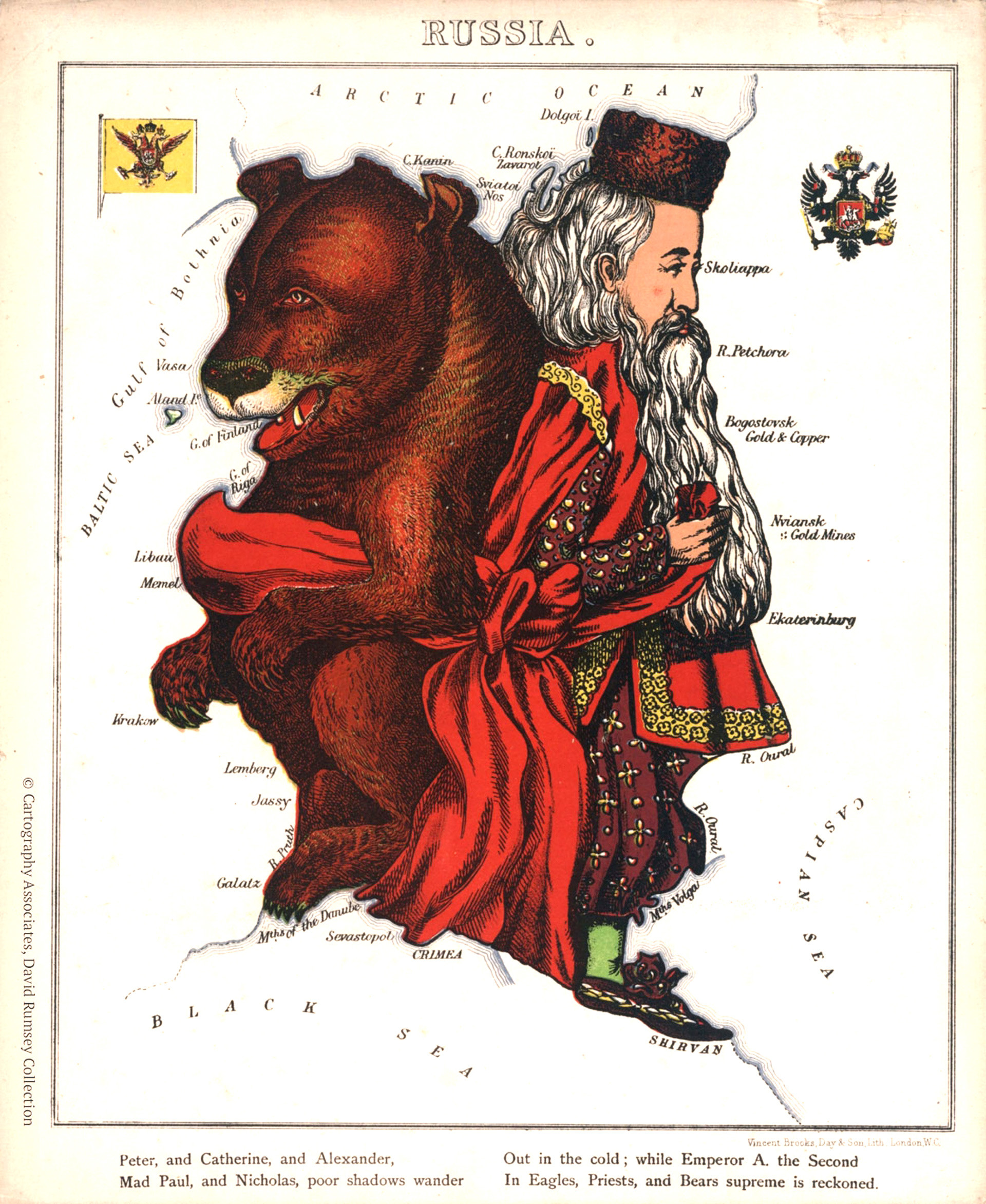 In 1868 Harvey William drew a series of cartoons, each showing a single country and containing a brief, witty poem. For example, “Beautiful England, – on her Island throne, – / Grandly she rules, – with half the world her own...” Russia is shown as a bear crossed with a priest. The caption says "Peter, and Catherina, and Alexander, / Mad Paul, and Nicholas, poor shadows wander/ Out in the cold; while Emperor A. the Second / In Eagles, Priests, and Bears supreme is reckoned."

The Russian military has witnessed both glorious victories and bitter defeats. Read about 5 of the worst.