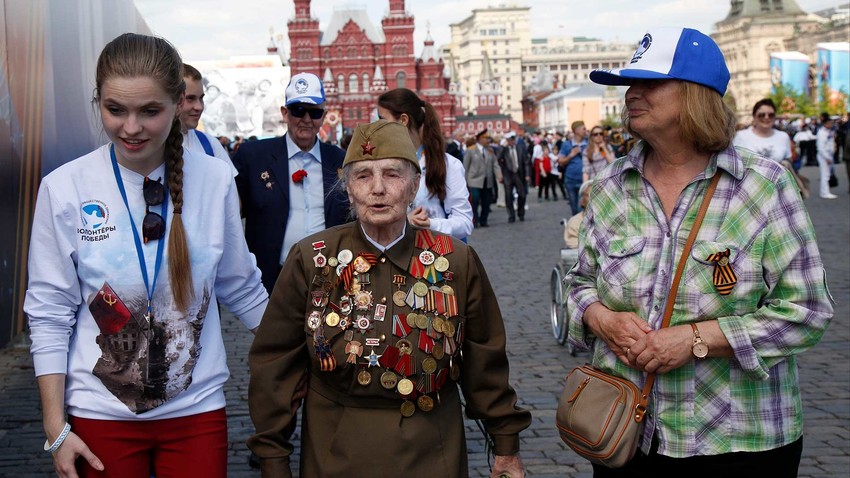 AP
Victory Day (May 9) is one of Russia’s most cherished national holidays, and it’s always celebrated grandly. Many events are held to commemorate the victory in the Great Patriotic War, which cost the USSR at least 27 million lives, and war veterans are obviously central to the celebrations.

In April 2017, state statistics reported that about 1.8 million veterans of the Great Patriotic War were still alive in Russia. Of that total, less than 200,000 actually fought, while more than a million were home-front workers.

With each passing fewer veterans remain, and now on the eve of Victory Day 2018 their presence in kindergartens and schools is not as common as in previous years when they spoke to the children about their achievements 70 years ago.

Likewise, fewer and fewer veterans show up at official events organized on May 9. The most popular meeting place for veterans is the fountain by the Bolshoi Theater in Moscow. There, veterans dress with medals pinned to their old military uniforms. 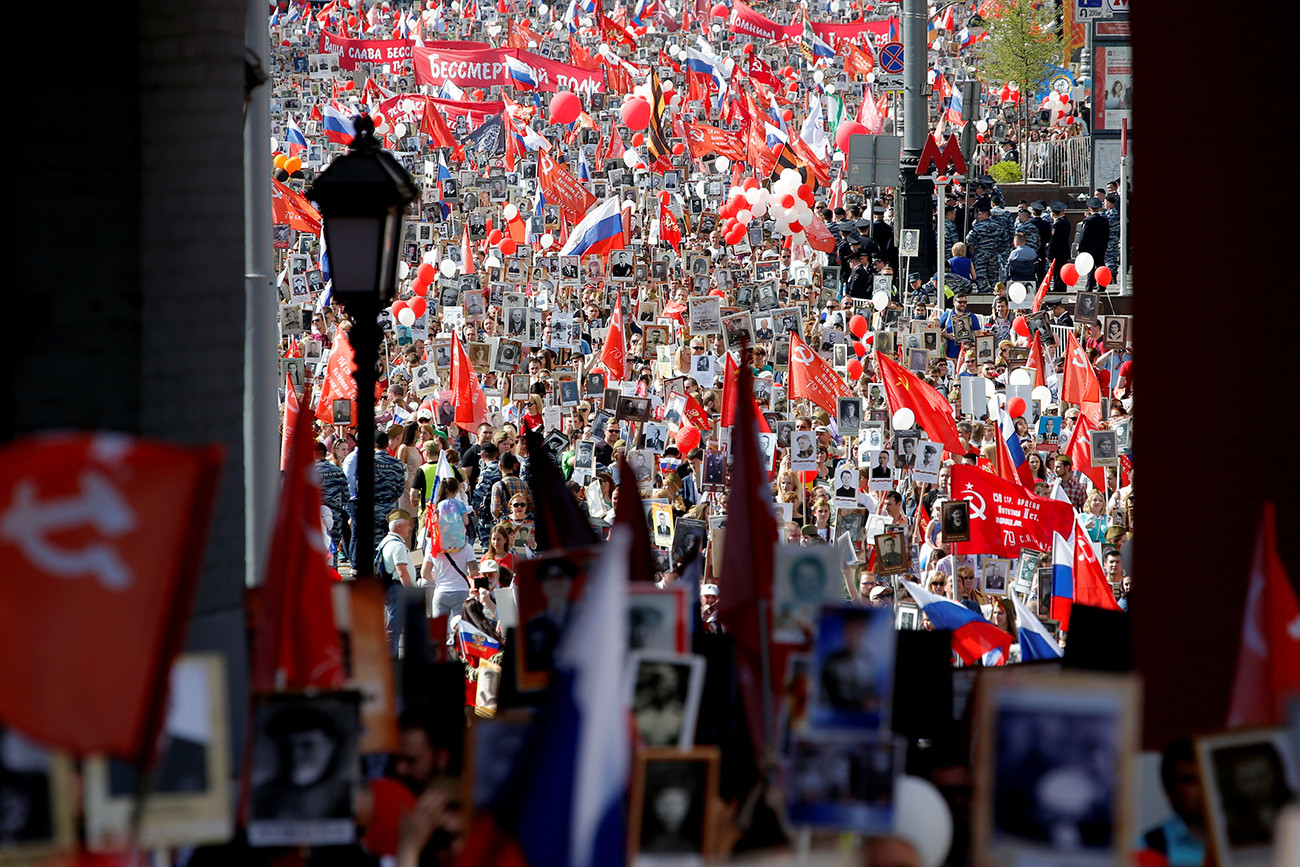 While more than 70 years separate us from May 1945, the victory is still very important for the national identity, which can be seen in the many events dedicated to May 9. The most significant project in recent years, whose goal is to keep alive the memory of the war generation's great deeds, celebrates those veterans no longer alive. Known in English as “The Immortal Regiment” (Bessmertniy Polk), every year on May 9 tens of thousands of people in cities throughout Russia walk down central streets with portraits of relatives who fought in the war and who are no longer living. The event is also marked across the globe, last year taking place in 40 countries.

The Immortal Regiment was originally a initiative launched by journalists in the Siberian city of Tomsk who wanted to continue the Soviet tradition of bringing photographs of relatives to war memorials. Responding to the activists’ call, several thousand residents came out to the central streets of Tomsk on May 9, 2012, holding posters with photographs of their relatives who fought in the Great Patriotic War.

The Tomsk event quickly became famous, and the following year the Immortal Regiment paraded along the streets of more than 100 Russian cities. By 2014, it marched through 500 cities. Two years ago the event became even and was sanctioned by the government. In Moscow, the Immortal Regiment marched in the city center, and on Red the procession was headed by President Vladimir Putin, who held the portrait of his veteran father. Almost 500,000 participated in the event in the Russian capital 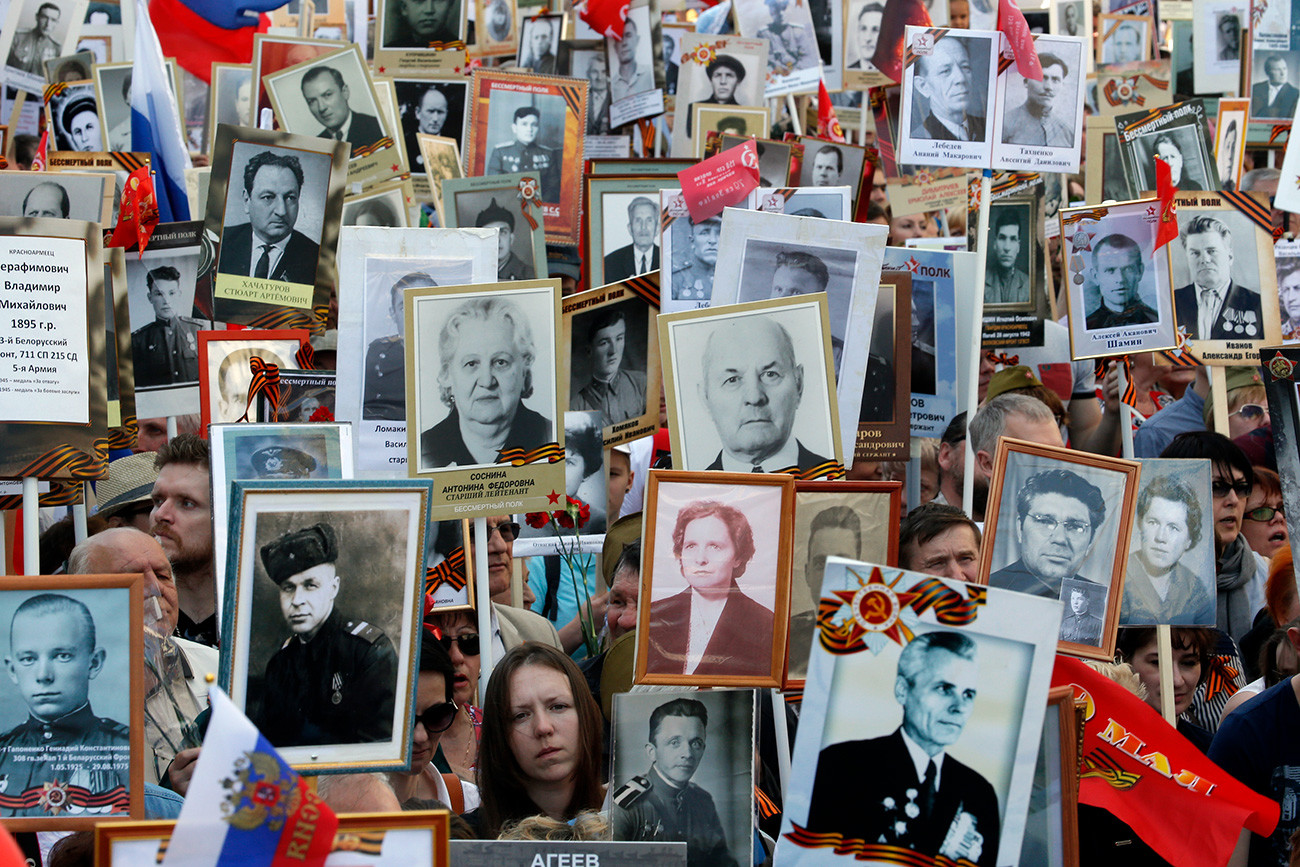 Immortal Regiment is now a national movement, and it has the moypolk.ru website (in Russian) onto which people can upload stories of relatives who fought in the war. Currently, it has hundreds of thousands of stories that comprise the “People’s Chronicle of the War.”

In to the Immortal Regiment, another famous Internet project is the website, “I remember” (Ya ), established more than 15 years ago by writer Artem Drabkin. The site contains hundreds of interviews with Soviet veterans, as well as those from other countries: Serbia, Bulgaria, Romania, Poland, France Germany. Drabkin says the veterans’ personal stories add to our knowledge of the war and give a new emotional dimension to those events, something that professional historians often overlook.

The Victory Volunteers also compile recollections of veterans. Established at the time of the war’s 70th anniversary, it has almost 200,000 participants. Volunteers say their goal is providing assistance to needy veterans. Also, in recent decades veterans have been helping each other through a national network of organizations, and both local and federal authorities support them in this endeavor.

‘Memory of the people’

Besides the many public events, Russia has a number of state projects dedicated to the victory. Two years ago the Defense Ministry launched the website, Podvig , which helps people learn about the medals their relatives received, as well as the specific deeds that merited the distinction.

Another ministry portal, Pamyat  (Memory of the People), contains about 500,000 documents related to medals and other information (place of burial, information on Red Army military operations, etc.). This author easily found the medals awarded to his grandfather, who fought in the first years of the war on the Northwestern front.

The Ribbon of St. George (Giorgievskaya ) has been a Victory Day tradition in recent years, distributed on the streets of major cities for the past 12 years.

The ribbon’s colors are the same as the Guards Ribbon during the war, and the name also pays homage to the ribbon of the Order of St. George established by Catherine the Great as the Russian Empire’s highest military honor.

Today, the Ribbon of St. George is distributed en masse throughout Russia and in many countries across the globe.