A long history of Western meddling: How foreign troops intervened in Russia a century ago 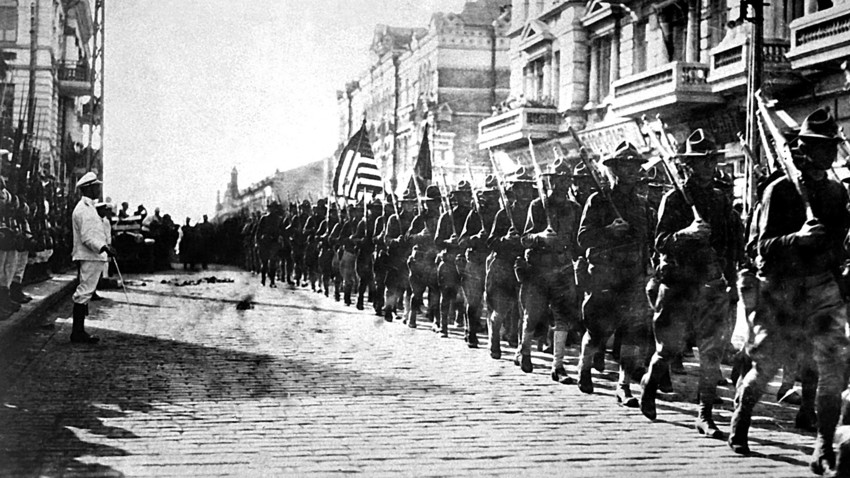 American troops in Vladivostok, parading. Japanese marines are standing to attention as they march by. August 2018.

NARA
In 1918-1922, nations previously allied with Russia sent their soldiers to occupy strategic locations in the country in an effort to protect their interests (and possibly influence the course of the Civil War). The Red Army prevailed, however, mainly because the intervening powers didn’t have a coherent strategy.

The Bolsheviks seized power in October 1917 while Russia was at war with Germany. Vladimir Lenin promised to end the war, and one of the first things he did was sign the Decree on Peace, proposing “an immediate peace without annexations and without indemnities.”

This bolt from the blue was a pleasant surprise for Germany, but a major shock for Russia’s allies: Britain, France, the U.S. Japan. Concerned by the chaos in the country, these nations sent troops to occupy parts of Russia.

As the Bolsheviks called for an end to the war, the situation became worse for the Russian army that was still on the battlefield. Germany continued its offensive, and Leon Trotsky, Lenin’s right-hand-man, failed to negotiate peace on favorable terms. In his  Trotsky described the negotiations: “[German] General [Max] Hoffmann, tired of judicial debates, used to put his combat boot on the table. We were well aware that this boot was the only tangible argument during the talks.” 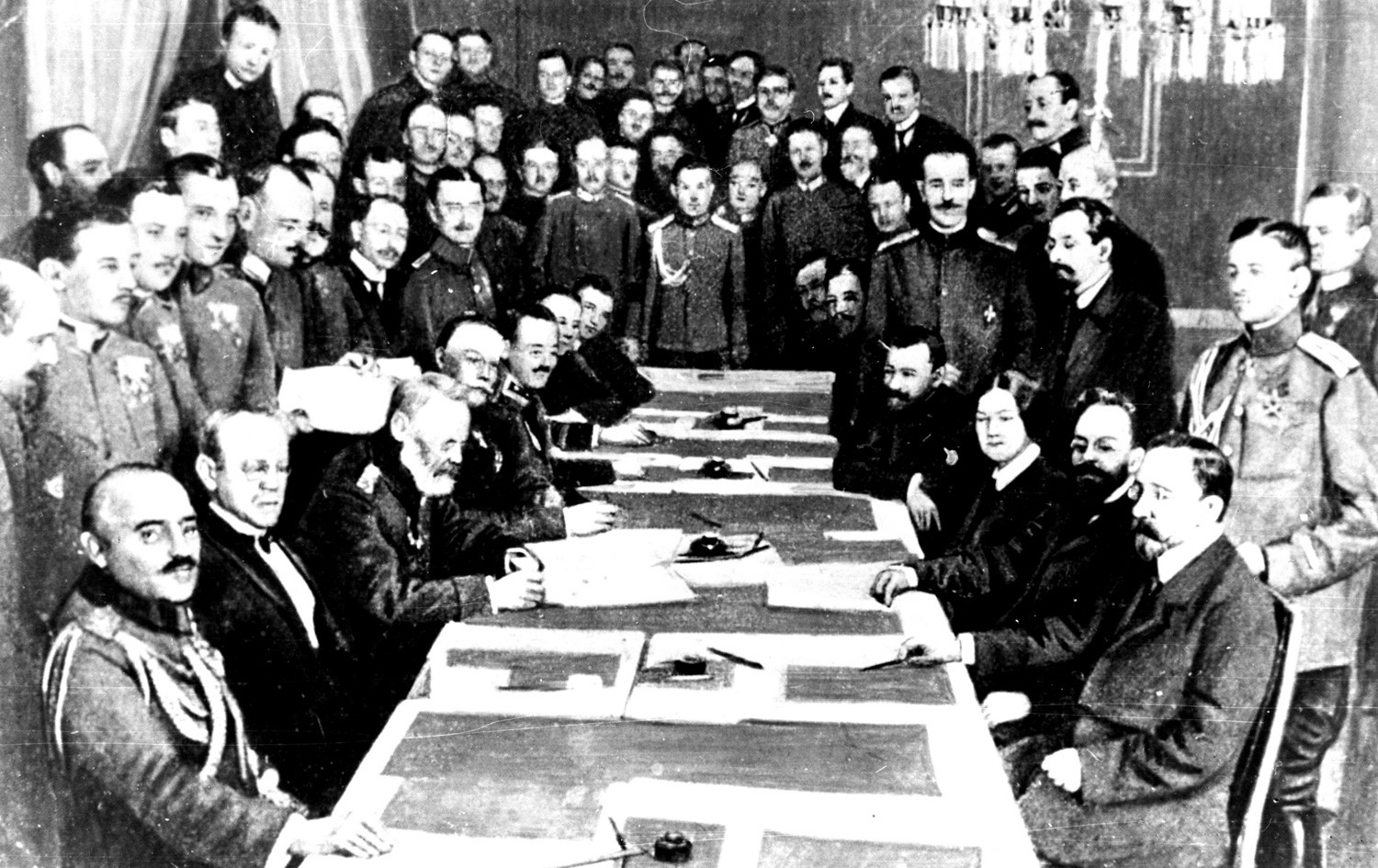 Negotiating the Treaty of Brest-Litovsk in 1918. Germans on the right, Russians (Bolsheviks) on the left.

Indeed, combat boots carried the day, and on March 3, 1918, Trotsky was forced to sign the very unfavorable Treaty of Brest-Litovsk, whereby the former Russian Empire officially ceded Ukraine, Finland, the Baltic region Poland, losing 34 percent of its population and 54 percent of industrial enterprises.

Germany enjoyed , however, only until November 1918 when it capitulated to the Western powers, known collectively as the Entente.

After the Brest-Litovsk treaty, the Entente politicians were outraged and took matters into their own hands. “Lenin and Trotsky had signed a shameful peace… whereby they liberated more than 1,000,000 Germans to come over and attack our people in the West… the Allies in (August) 1918… decided to occupy Arkhangelsk and Murmansk and put an inter-Allied force on shore there,” wrote Winston Churchill, who was then British Minister of Munitions. 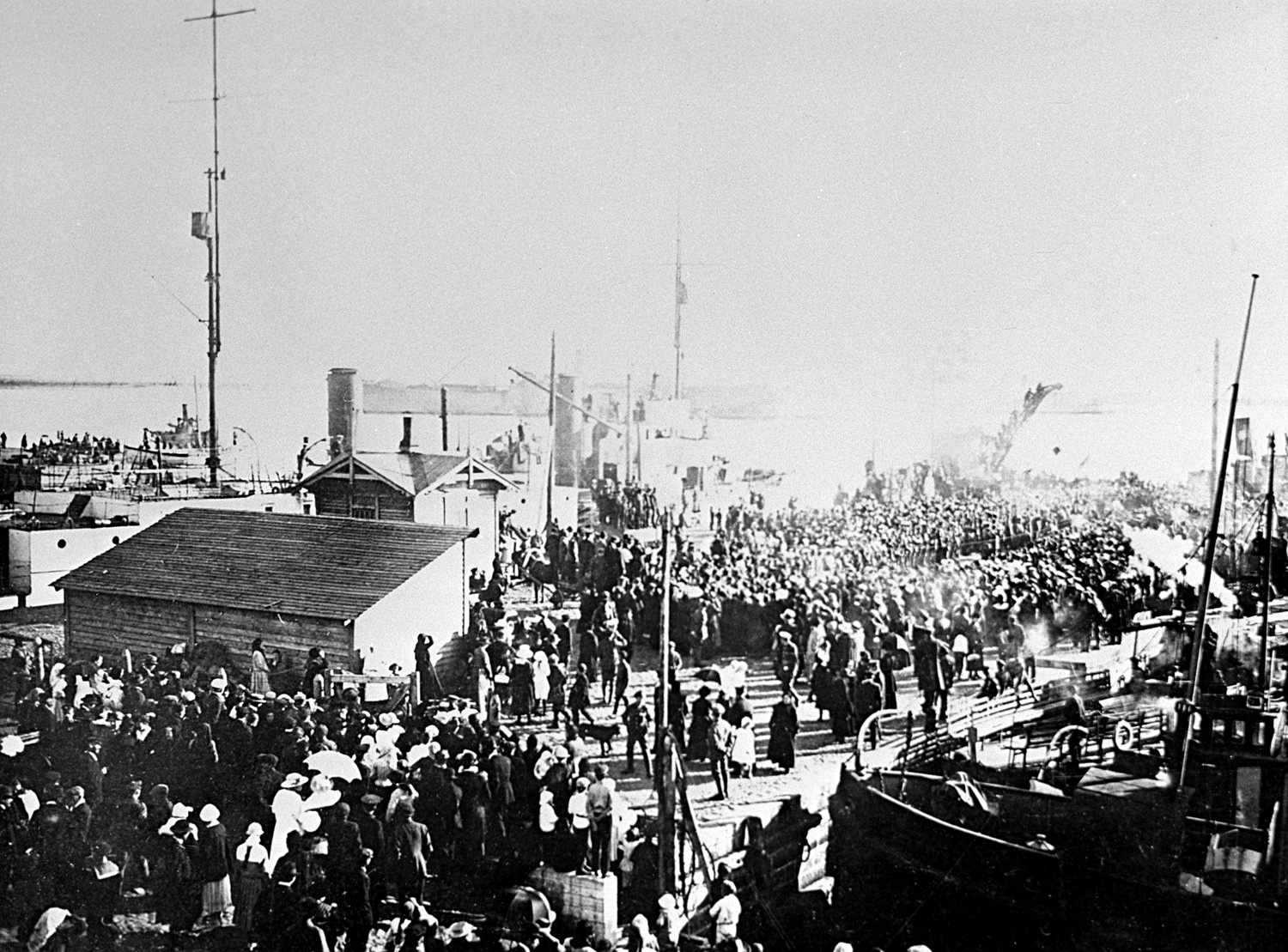 In March 1918, British, French and American soldiers landed in Arkhangelsk, a strategic port on the White Sea. In August, they occupied Murmansk, another northern gate to Russia. The anti-Bolshevik White Movement supported the intervention, whose official goal was to prevent Western shipments of munitions from falling into German hands.

From Ukraine to Vladivostok

Russia’s North wasn’t the only place where Western troops appeared. They also intervened in the Caucasus region, Central Asia Crimea, where colonial French regiments remained for a couple of months. As Alexander Vertinsky, a Russian singer, recalled: “Exotic African troops were strolling along city streets – Africans, Moroccans, Algiers… careless, having no idea what are they doing here.”

Japan sent as much as 70,000 soldiers to the Russian Far East, taking control of Vladivostok and the entire Pacific coast. The Japanese outnumbered all other invaders in terms of the number of troops: Britain, along with its colonies, sent about 30,000, while the U.S. sent approximately 15,000. France, exhausted by war losses, managed to send only several thousand troops 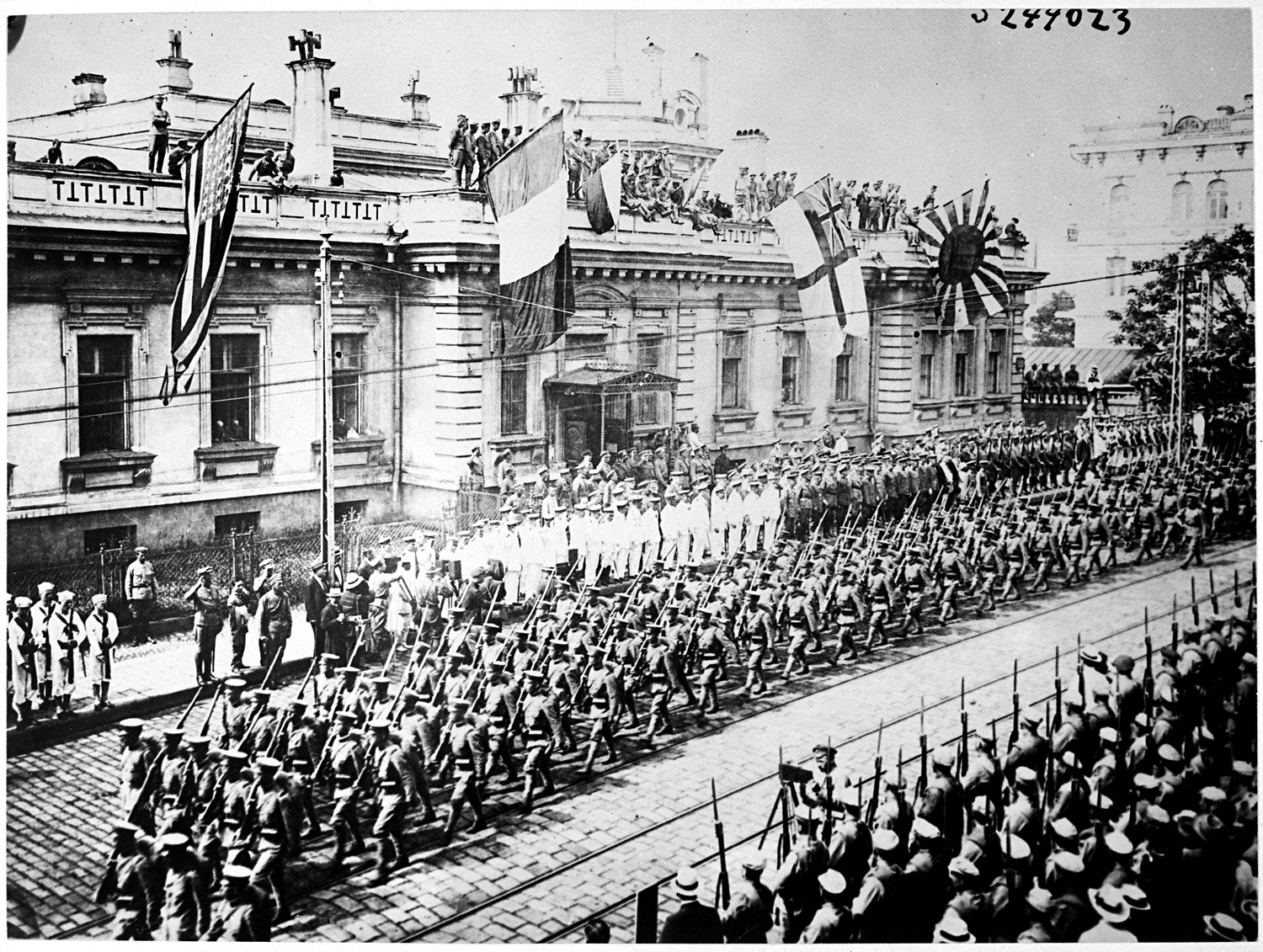 Vladivostok, Russia. Soldiers and sailors from many countries are lined up in front of the Allies Headquarters Building.

the same time, in the heart of Russia 40,000 Czechoslovak soldiers were moving eastwards through Siberia trying to find a way out of the country. They were Austro-Hungarian soldiers, and in they formed the Czechoslovak Legion to fight their former masters, but the war ended and the Russian government that they worked for no longer existed. Unwilling to help the Bolsheviks, the Czechoslovaks assisted the White Movement, at the same trying to find a way out of Russia.

Nevertheless, the role of the Czechoslovaks in fighting against the Reds was hardly palpable, much like the role of the Entente in general. As Lenin recognized, “For three years, British, French and Japanese armies stayed on Russian territory. Undoubtedly, if they had made the slightest effort to defeat us, they would have won.” 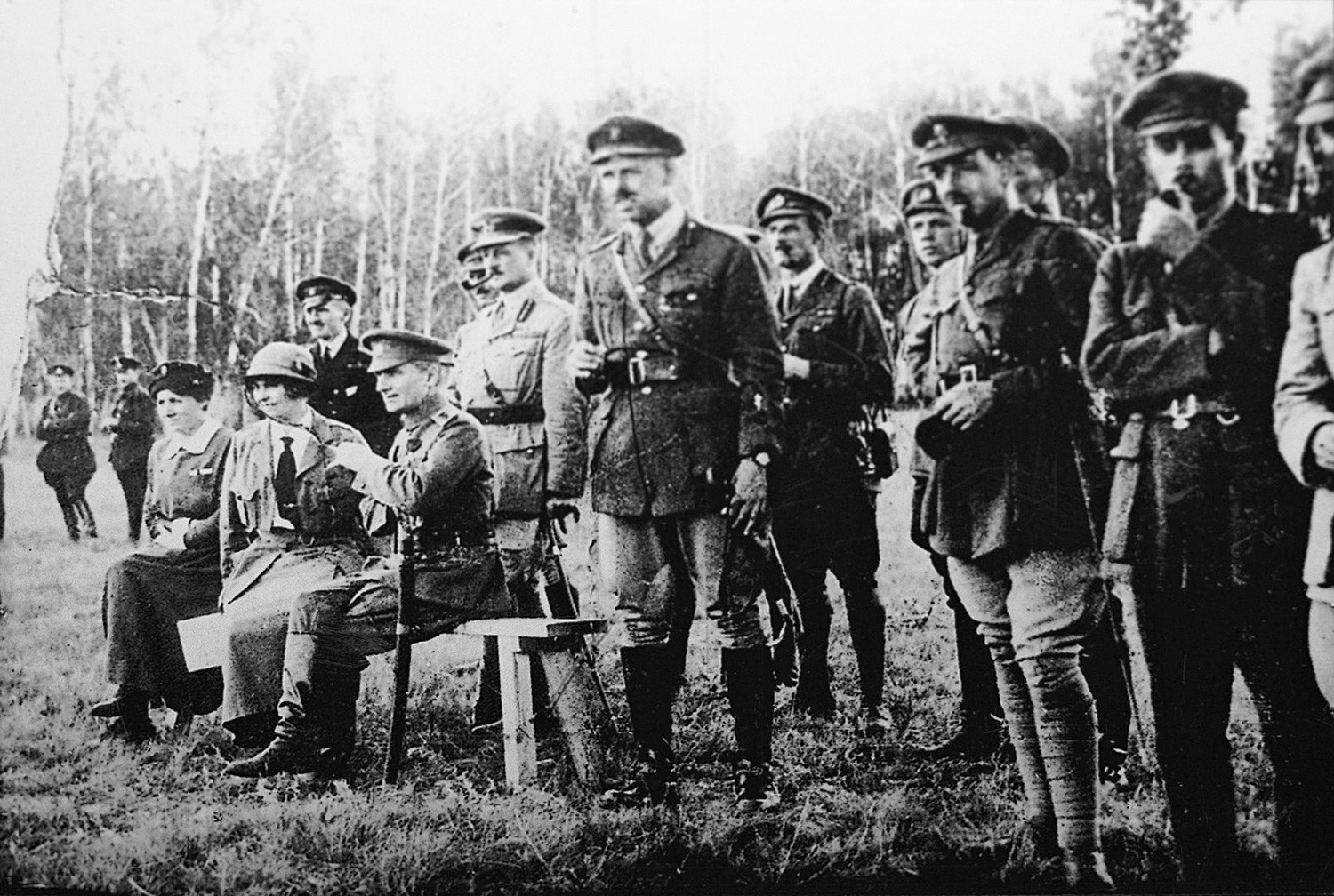 Admiral Alexander Kolchak, the leader of the anti-Bolshevik movement (sitting, on the right), with British officers on the Eastern Front, Russia, 1918.

White Movement leaders, such as Admiral Alexander Kolchak and General Anton Denikin, also assessed the Entente’s help as minor. Kolchak’s biographer, Vladimir Khandorin, wrote: “The main assistance from the allies to the Whites was providing their armies with weapons and uniforms.” While important, their detachments rarely faced the Red Army on the battlefield.

Why so reluctant? The West was constantly disagreeing with the Whites on Russia’s future. As dedicated patriots, the generals of the White Army fought for Russia “united and indivisible,” while the allies wanted to grant independence to the country’s national provinces.

Historian Dmitry Lehovich wrote, “Lloyd George [British Prime Minister] was hesitating between helping the White Movement, plans to trade with the Soviet government and a willingness to support the independence of smaller states along the Russian border.” 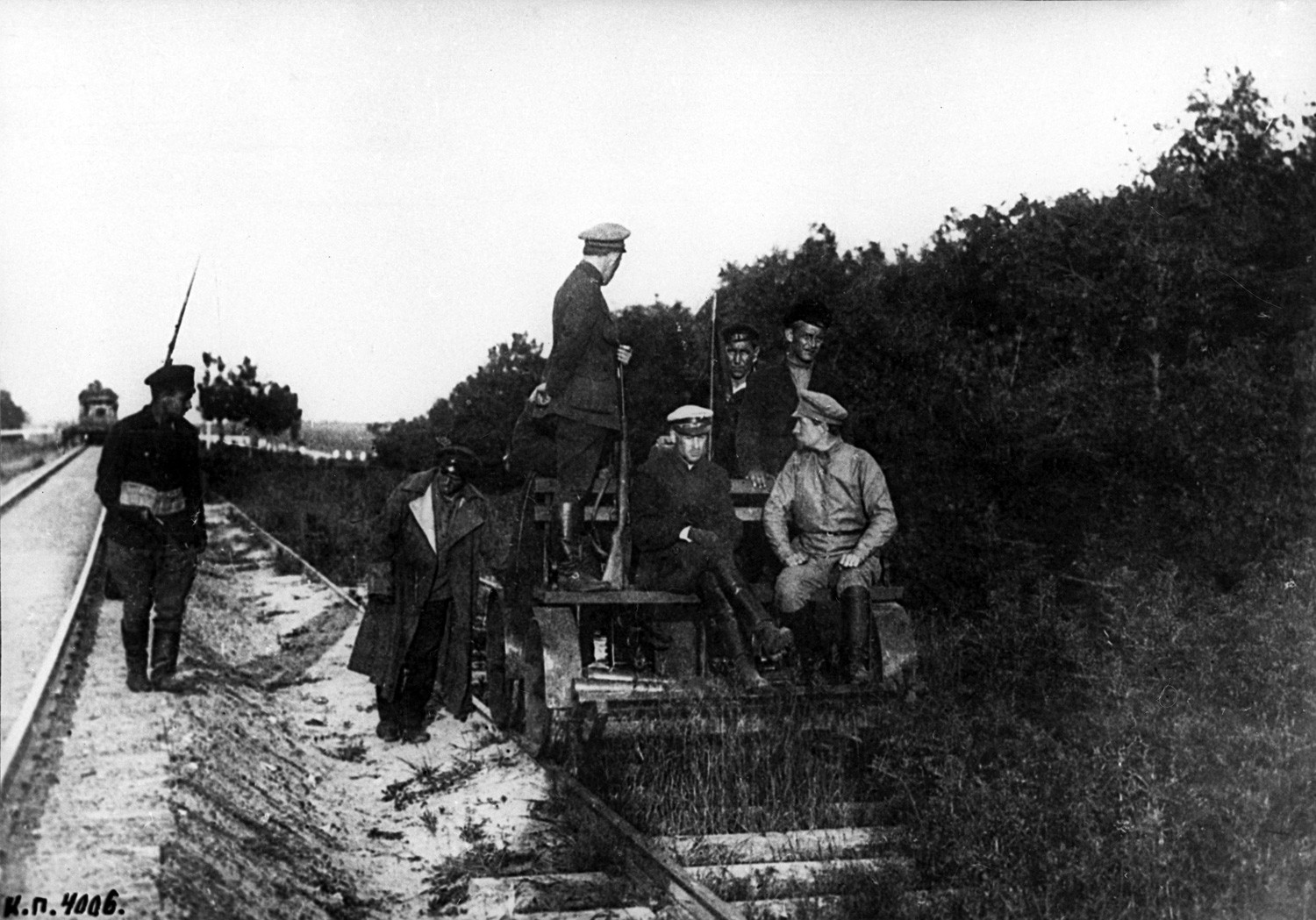 This wouldn’t end well for the Whites, who suffered utter military defeat. Some were killed by the Bolsheviks (Kolchak), and others had to emigrate (Denikin).

By the end of 1919, Czechoslovaks, British and all other Western troops had returned home. The Japanese stayed in the Far East longer than anyone, until 1922, but they also were not eager to fight the Bolsheviks and left. Eventually, the West realized that it had to establish relations with the new, Soviet Russia.

The Civil War was painful for Russia, tearing the society apart. Read our article on the great Russians who had to leave their country as they opposed themselves to the Bolsheviks.