How sexual revolution exploded (and imploded) across 1920s Russia (PHOTOS) 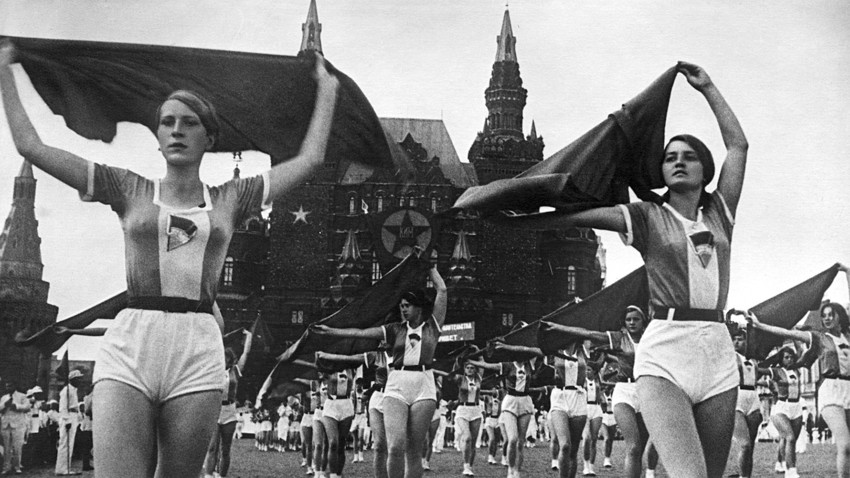 Alexander Rodchenko / Multimedia Art Museum of Moscow
Travesti parties, Vladimir Lenin advocating sexual freedom, nudist anarchists aboard trams, a nude beach near the cathedral of Christ the Savior… such was Russian life at the beginning of the Soviet state. What could possibly go wrong?

“Stark naked people wearing armbands reading “Down With Shame!” have recently appeared in Moscow. A group was seen boarding a tram. The tram stopped, the public was outraged,” Mikhail Bulgakov, the famous Russian writer, wrote in his diary in 1924. Just 15 years prior to that, women could not think of going out in a knee-long dress. But did these changes happen overnight?

Pre-revolutionary Russian society, especially in the capitals, was not puritanical in nature. An anonymous soldier born at the end of 19th century recalls (link in Russian): “at 10, I had already been exposed to all kinds of lewd behaviour… Pornographic pictures were not exactly a rarity.” 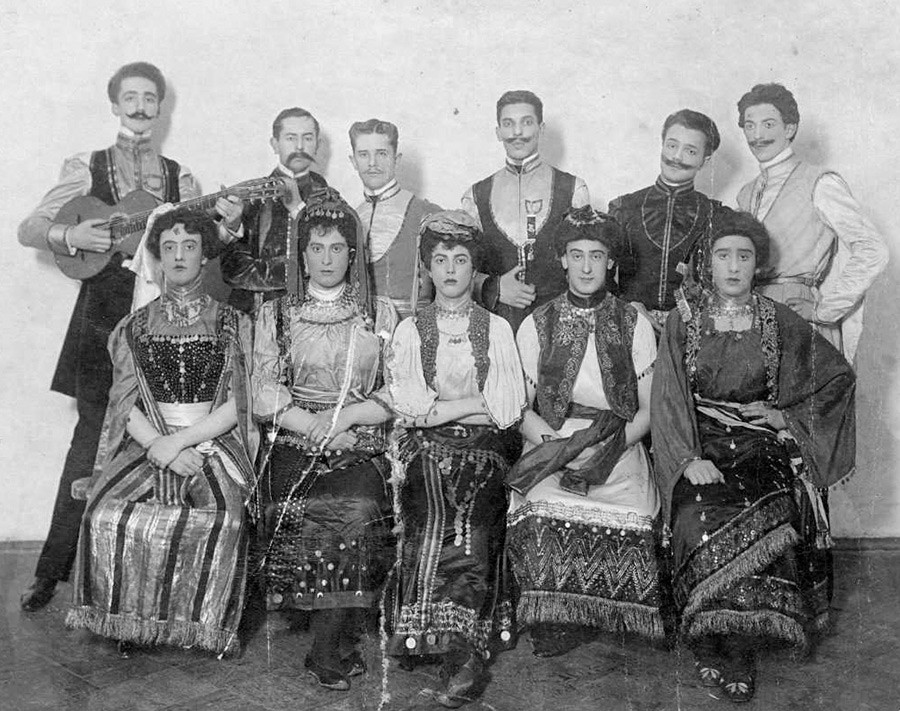 Senior male students of the Imperial School of Jurisprudence disguised as gypsy men and women, circa 1910.

Cross-dressing, travesti and gay parties were popular in artistic circles, with even a certain few noblemen having been known for being gay. Party life, often involving multiple partners, was a regular pastime for some. However, male homosexuality was a criminal offense… until Bolsheviks came onto the scene. 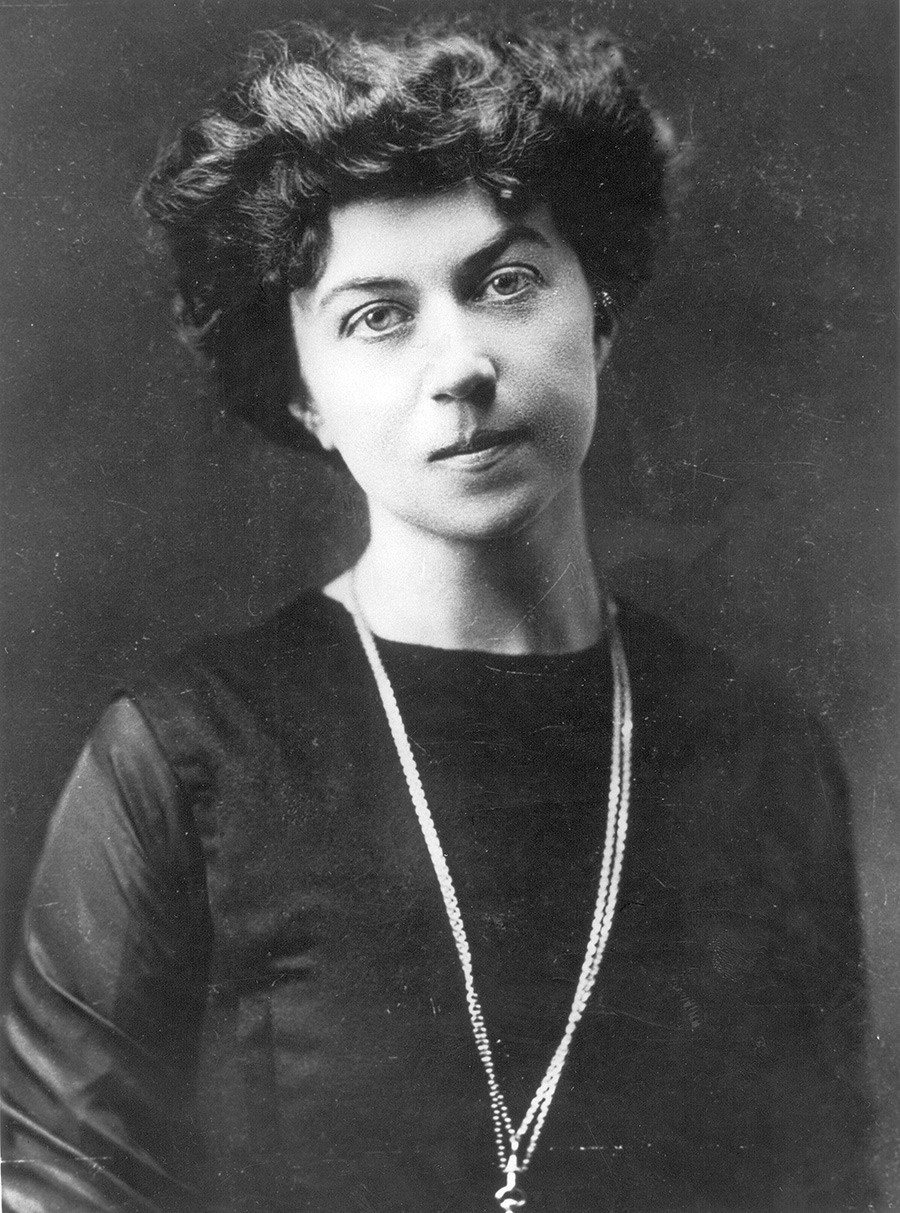 Alexandra Kollontai in her younger years

Ideologically, sexual liberation was one of the key weapons in fighting Orthodoxy, and the old order in general. Among early Bolsheviks, the key propagandist of a new family order was Alexandra Kollontai, Russian revolutionary and later, a diplomat. There’s a popular theory often attributed to Kollontai – that of the ‘glass of water.’ It states that love (and consequently, sex) should be available to anyone as easily as asking for a glass of water. This, however, is a gross oversimplification of Kollontai’s idea.

Kollontai promoted a concept of the ‘new woman’ – one freed from the oppression of marriage, household work and the business of  raising children; all these chores must be taken on by society and state. They would take on children’s education (including sexual), urge a move toward a nationwide catering industry, collective housing, foster care and so on. For Kollontai, love was to be freed, too – civil partnership would take the place of traditional marriage. 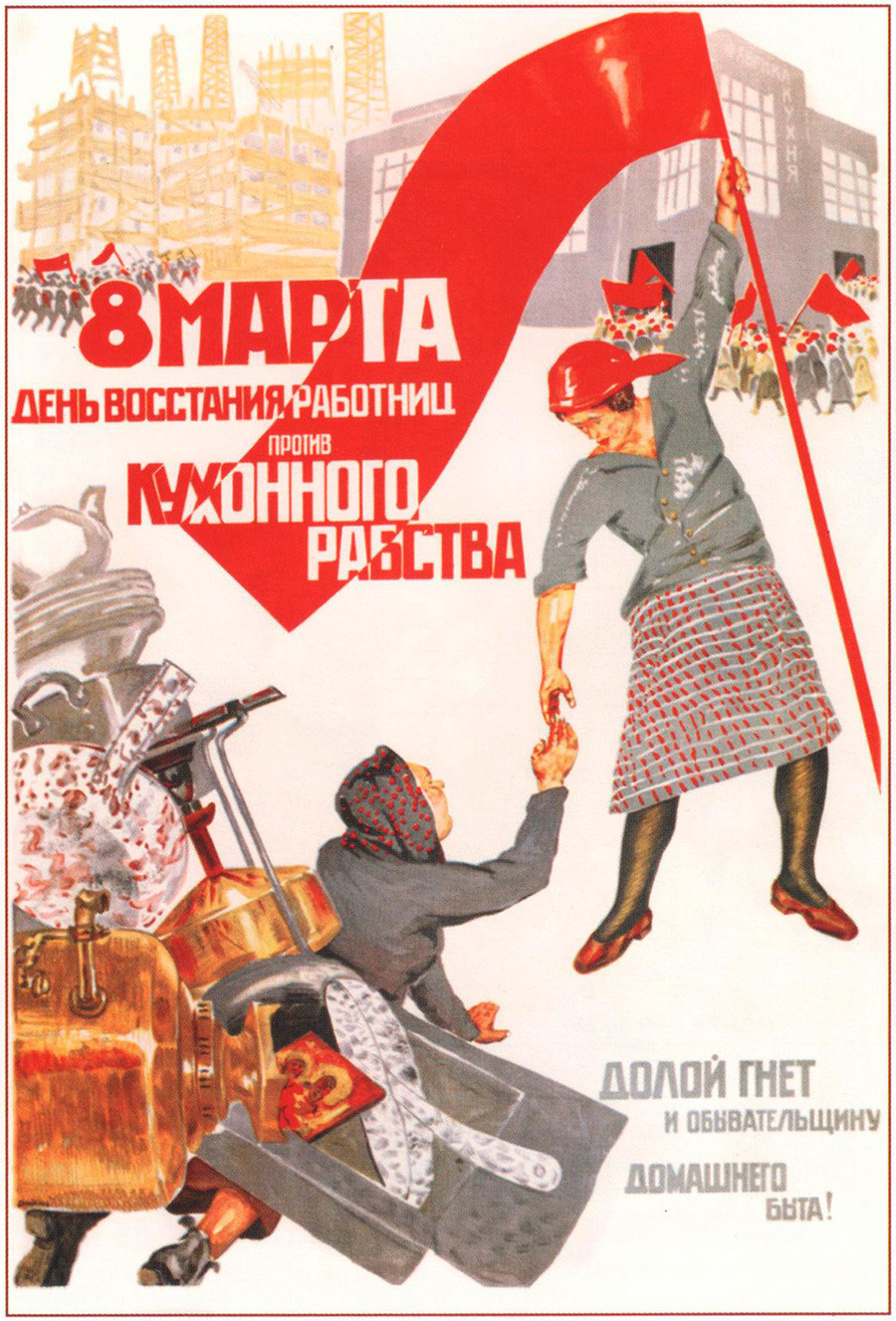 "March 8 is the day the female workers revolt against the kitchen slavery. Down with the oppression and philistinism of house chores!"

Obviously, Bolsheviks were building their policy on family along the most progressive lines – something that would not be seen in the West for decades. However, the onus was now on the individual, and such all-encompassing freedom was simply too much for the agricultural, barely urbanized Russian society of the 1920s. 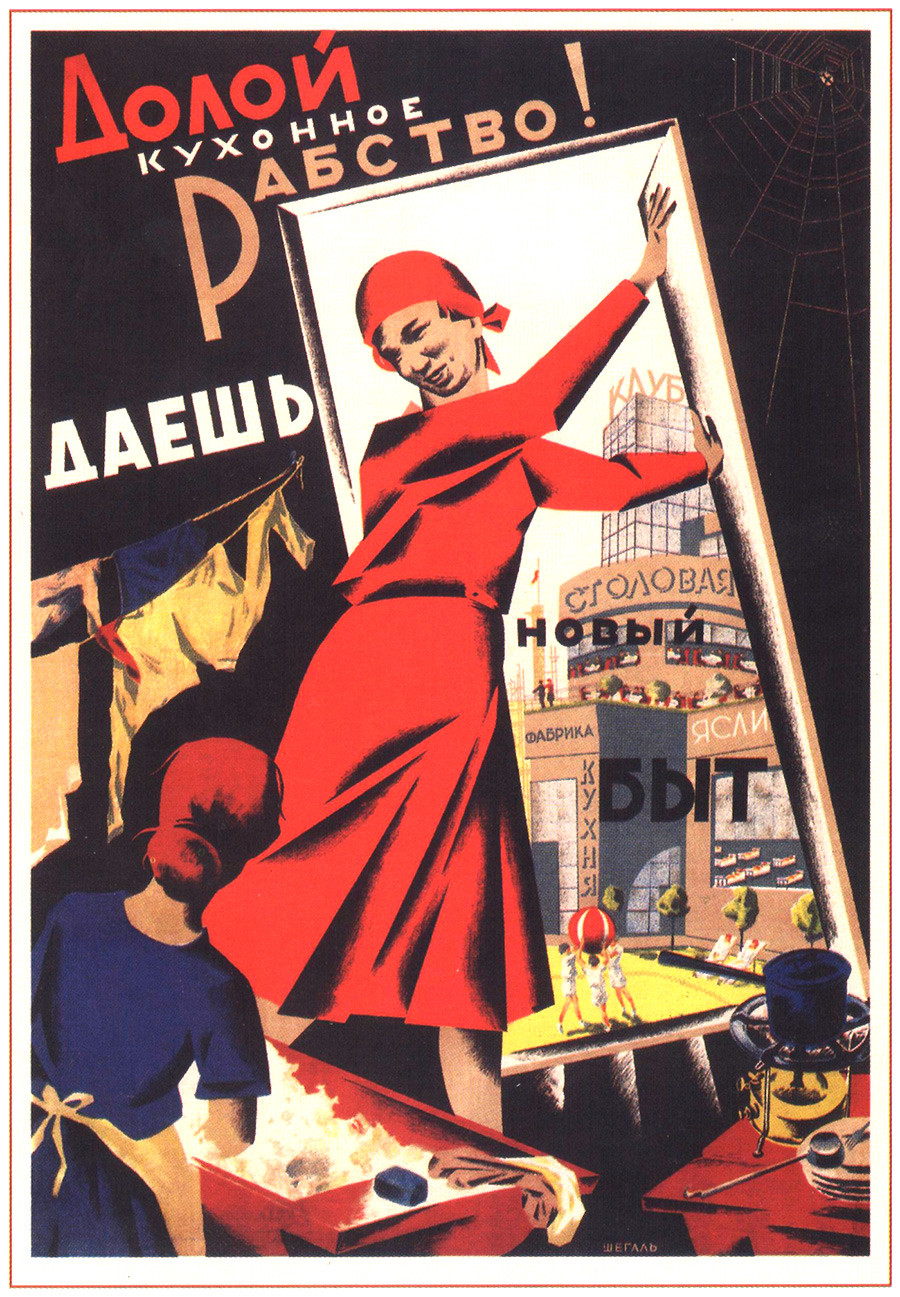 "Down with kitchen slavery! New life!"

“On the abolition of marriage” and “On civil partnership, children and ownership” were among the first decrees of the Soviets in 1918. Church weddings were abolished, civil partnership introduced. Divorce was a matter of choice. Abortions were legalized. All of that implied a total liberation of family and sexual relations. This heralded the beginning of the raunchiest epoch in recent Russian history. 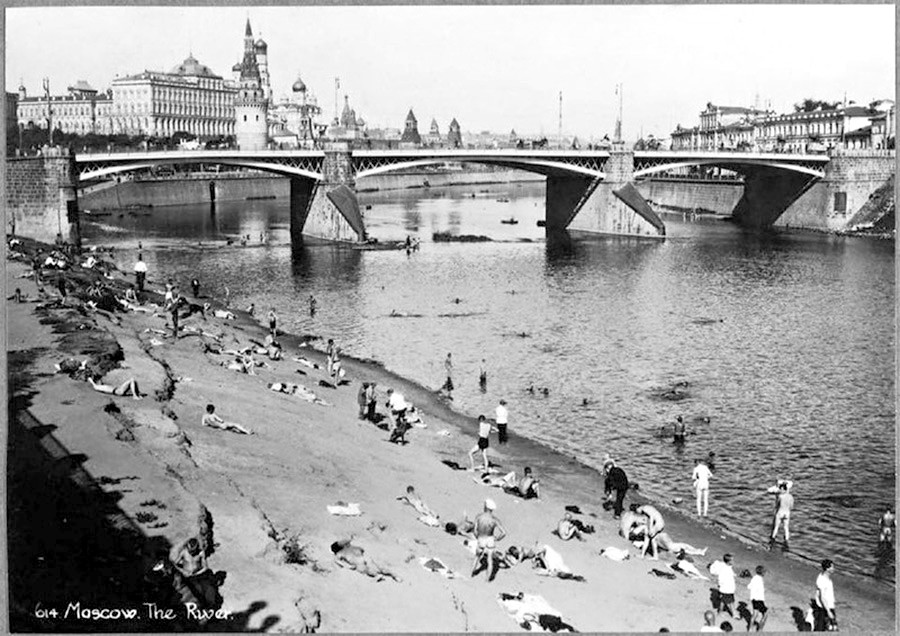 Nude beach near cathedral of Christ the Savior and the Moscow Kremlin, 1920s

A relaxed attitude to nudism was a a vivid sign of the times: on the bank of the Moskva river, near the Cathedral of Christ the Saviour, a nude beach formed, the likes of which Western Europe could not have dreamed of at the time. The aforementioned “Down With Shame!” society had held numerous marches, one numbering as many as 10,000 people. Alexander Trushnovich, a monarchist, recalls (link in Russian) one of their gatherings: “‘Down with philistines! Down with deceiving priests! We don’t need clothes – we’re children of the sun and air!’ – a naked spokesman was shouting from a stage in Krasnodar’s main square. Walking past this place in the evening, I saw the stage dismantled... and somebody beat up the ‘child of sun and air’”.

All of these wild developments had been taking place while Russia was still in the midst of the World War, as well as the Civil War. Amnesties in 1917, 1919, 1920 and beyond freed a great many criminals in a country where state power had only begun to form. The masses of criminals were joined by defecting and discharged soldiers.

Rape by 1920s has become an epidemic. Quite strikingly, sexual violence towards former noble and bourgeois women was for a time even considered “class justice” among the proletarian males. Meanwhile, up to 20 percent of Russia’s male population had carried sexually-transmitted diseases (although in Tsarist Russia in the beginning of the century, the numbers were 25-27%). New laws on marriage and the overall atmosphere of breaking with the past encouraged promiscuity and casual approach to sex, unthinkable just years ago. 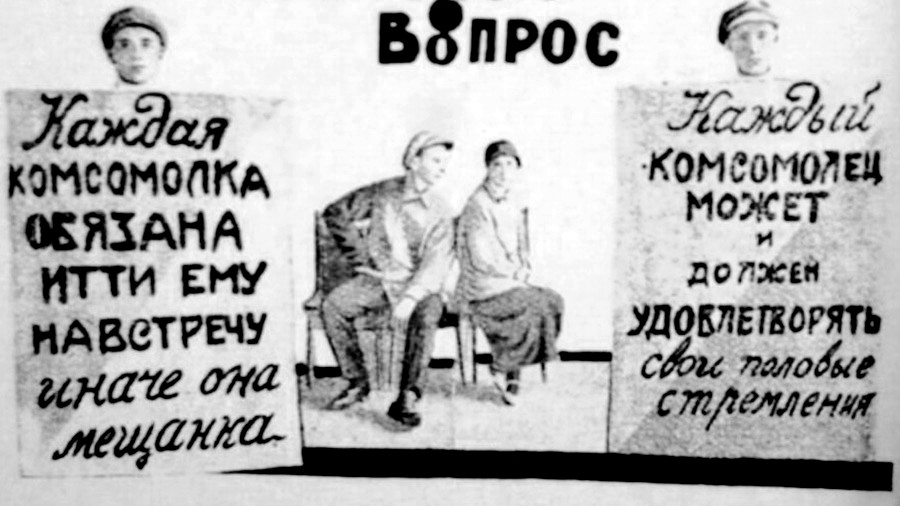 A project for a performance in 1920s. The posters read: "Every communist male can and must satisfy his sexual needs" (right); "Every communist female must aid him, otherwise she's a philistine."

Soviet society was breeding a dangerous generation of homeless orphans – official reports indicate that, by 1923, half of the children born in Moscow had been conceived out of wedlock, and many of them were abandoned in infancy. The pendulum of sexual revolution had to swing back – and if it didn’t, it had to be pulled forcibly.

Already in the first half of 1920s, when sexual liberation was still in full swing, the Soviets had set about promoting traditional values… again.

In 1924, psychiatrist Aron Salkind publishes ‘12 Sexual Commandments of the Revolutionary Proletariat’, that read “love must be monogamous”, “sexual intercourse must only be the final link in the chain of deep and complicated feelings connecting two people in love”. 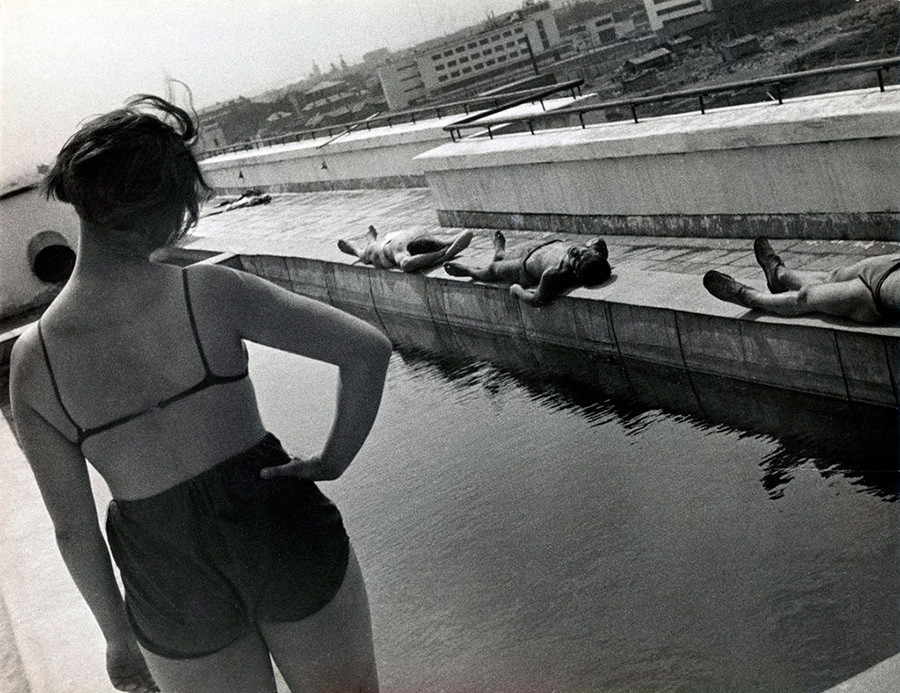 Gymnastics on the roof of a dorm in Lefortovo. This photo by Alexander Rodchenko was taken in 1932, but it perfectly captures the 1920s aesthetics.

Even as “Down With Shame!” were parading naked through the Moscow streets, People’s Commissar of Public Health Nikolay Semashko wrote that such behaviour “must be most categorically condemned… At a time when capitalistic monstrosities like prostitution and hooliganism are not yet eliminated, nudity aids immorality… That is why I consider absolutely necessary to stop this disgrace at once, with repressive methods, if needed...”

Soviet leaders did not want the population to squander its energy on self-gratification anymore. Severe austerity and cutbacks were introduced. Women’s rights groups were in decline. Moreover, the women themselves now barely had any reason for the education the feminists had so desperately fought for: no sooner had the woman been freed from the traditional, patriarchal society the Bolsheviks sought to remove that she was being brought back into the kitchen, having to cook for her worker husband; meanwhile,  factory rations were already being redistributed, which made home cooking a necessity. Kollontai’s “new woman” was new for just about a decade.

Now, the family was once more the basic unit of society. Decrees were reversed one after another. Finally, by 1934, homosexuality had been re-criminalized, and a ban on abortion reintroduced (1936). This did not lead to a reduction of the free woman’s propaganda value, of course. Because now, she could “do it all” – perform the communist task of forging the revolution, while also being a mother, wife, cook and cleaner.

For decades to come, sexuality and erotica would be completely shunned by Soviet culture and society – and considering this, it is no wonder Russian society had become so hypocritical about sex. The next sexual revolution would take place only in 1990s.