A Soviet-U.S. love story Hollywood script writers would die for

History
Alexandra Guzeva
It’s a tale of broken hearts, deportation, prison camps, and vendettas – all played out at the end of WWII and beyond. Luckily, there’s a happy ending. 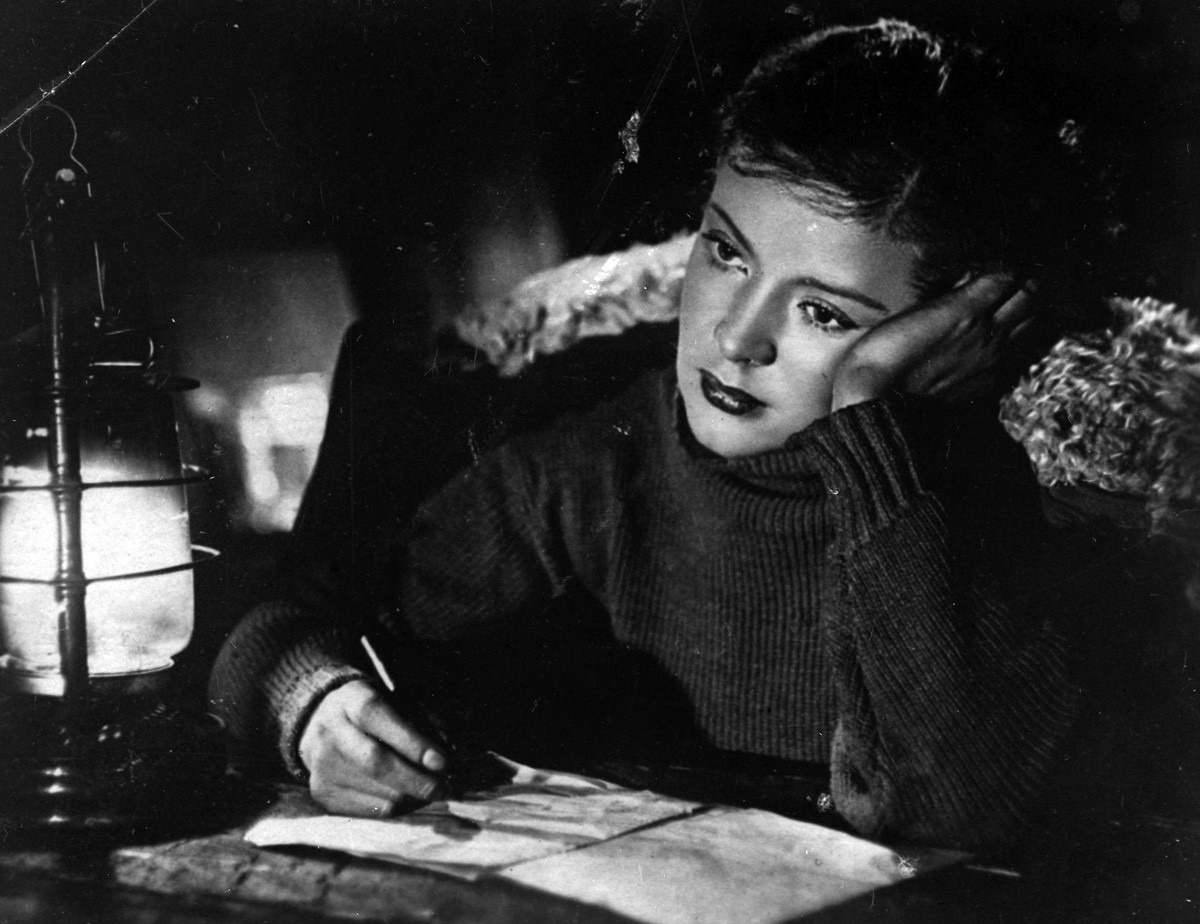 Russian movie star Zoya Fyodorova and American navy officer Jackson Tate met in Moscow, where he arrived on a military mission in January 1945 at the end of WWII. They caught each other’s eye at a reception at the USSR’s Ministry of Foreign Affairs and fell in love straight off the bat. When asking Zoya on a date, Jackson didn’t realize the risk she was running: Any association with a foreigner could spell prison time for a Soviet citizen. But Zoya thought Jackson was incredibly handsome and the Americans were allies of the USSR in the war, so she decided to take a chance. After an unhappy marriage, meeting Jackson was a breath of fresh air. To his surprise, Zoya asked him never to wear his military uniform on their dates and to always remain silent - to avoid giving his nationality away.

The secrecy of their meetings only heightened their feelings for each other. The lovers were making plans for a life together, and on the night of May 9, Zoya told Jackson she felt she would conceive that very evening. They decided to name the baby in honor of the Allied victory - Victor or Victoria.

Even in those harsh years of the Stalin regime, the young couple still had a small chance of staying together, but their chance of happiness was ruined by the most sinister figure in Stalin's inner circle, Lavrentiy Beria. He was known for organizing the terror and reprisals, and also as a great admirer of women - and a sexual predator. It was his assistance that Fyodorova sought in 1941 before the outbreak of the war, to save her father, a revolutionary and a staunch communist, who had been arrested for an imprudent remark about Stalin. Charmed by her beauty, Beria released Zoya's father. He then invited her to his “wife's birthday” expecting to rewarded for his favor. But when she arrived at his house Beria’s wife was not in - the young actress flatly refused his advances before he threw her out, infuriated.

The start of the war saved Zoya from an immediate reprisal but it turned out, Beria had not forgotten about her and continued to follow developments in her life. Soon after May 9, 1945, Zoya was unexpectedly sent on a tour to the Black Sea coast to perform for wounded soldiers, while Jackson was expelled from the Soviet Union. Furthermore, he left without learning that Zoya's intuition was right - she was expecting their child 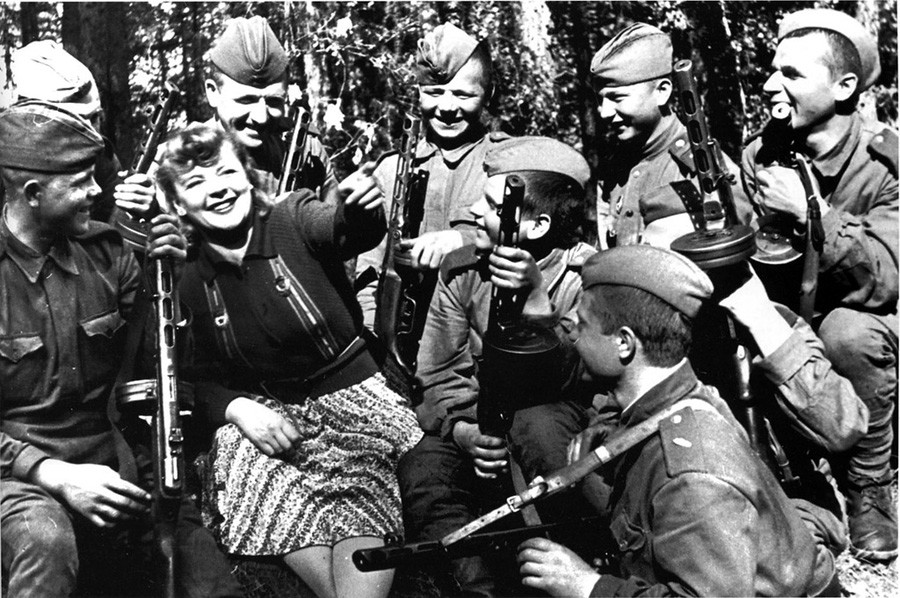 Zoya Fyodorova performing on the frontline, 1943

NKVD the first to learn about Zoya's pregnancy and kept her under surveillance even in the hospital where she gave birth. It was only then that she understood that it must have been Beria settling his score with her.

Heartbroken Jackson wrote Zoya letters from America, but she did not get a single one. Needless to say, she had no opportunity to write back. Jackson did receive one anonymous letter thought, asking him not to bother Zoya anymore – it was most likely from the NKVD.

When little Victoria was not yet a year old, her mother was arrested. During interrogations, Zoya was told that Jackson was a spy and that she had assisted him and had passed him information. The actress was accused of organizing a criminal gang that allegedly intended to kill Stalin - she was sentenced to 25 years in prison, with all her property confiscated. But little Victoria didn’t end up in an orphanage (or dead) thanks to her mother's sister, who was exiled to Kazakhstan, where she took her niece and raised her as her own 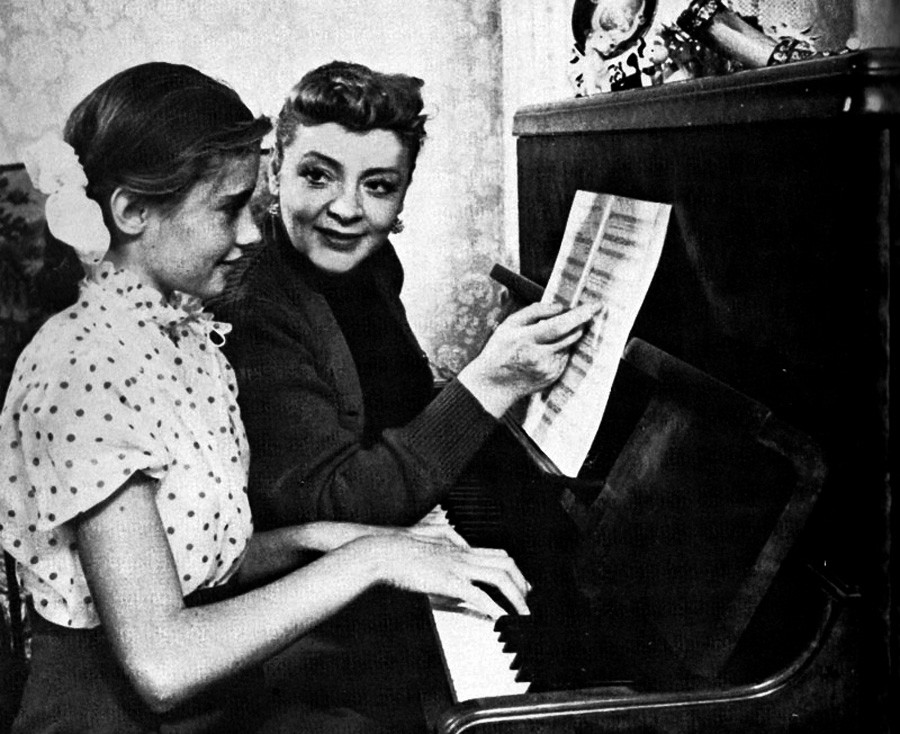 Zoya Fyodorova with her daughter Victoria

1953, when Stalin died, Zoya was released. Despite everything she had been through, she began acting again and was able to take Victoria back and tell her that she was her real mother.

Fearing what would happen to her daughter if she returned to prison, Zoya began to look for a way to contact Jackson and tell him that he had a daughter. An opportunity presented itself when a friend of hers who worked at the Ukraina Hotel, which often accommodated foreigners, advised her to talk to American Irene Kirk, a professor at the University of Connecticut, who at the time was working in Moscow as an interpreter. Kirk was a descendant of a White Guard officer, who fled Russia and spent her childhood watching films starring Zoya.

It was then that Zoya for the first time told her daughter who her father really was (she previously told her he was a Russian pilot killed in the war). Fifteen-year-old Victoria had always wanted a father, especially as she was known as a daughter of “an enemy of the people” - so she was very excited to hear of her American dad and longed to meet him. However, finding him in the U.S. proved a real challenge. It was only a few years after her return that Irene was able to get Jackson’s address from a friend of a friend. She sent him a letter with Victoria's photograph and he immediately recognized her as his daughter.

However, even having learned about his daughter, Jackson was unable to contact either her or Zoya. Irene managed to tell them that he had been found and had acknowledged Victoria as his daughter only when she herself returned to the USSR a few years later. By then Zoya and Victoria – through the efforts of the KGB - had long believed that Jackson had abandoned them 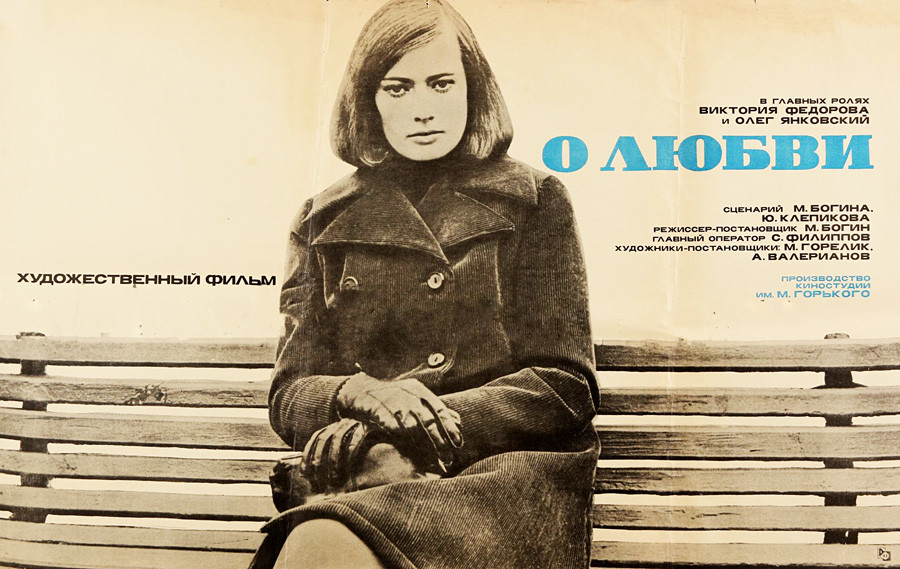 Victoria Fyodorova became an actress just like her mother. On a poster of 'About Love' movie

only way for Victoria to meet her father was to fly to the States, but a Soviet person could not just go abroad without an officially sanctioned reason. Jackson himself could not come either: He was sick and 75. Jackson’s letters did not always reach Victoria and all their calls were tapped. More often than not, his calls were simply not put through: "There is no answer" he was told by the voice at the other end.

Media campaign helped Victoria get to the U.S. 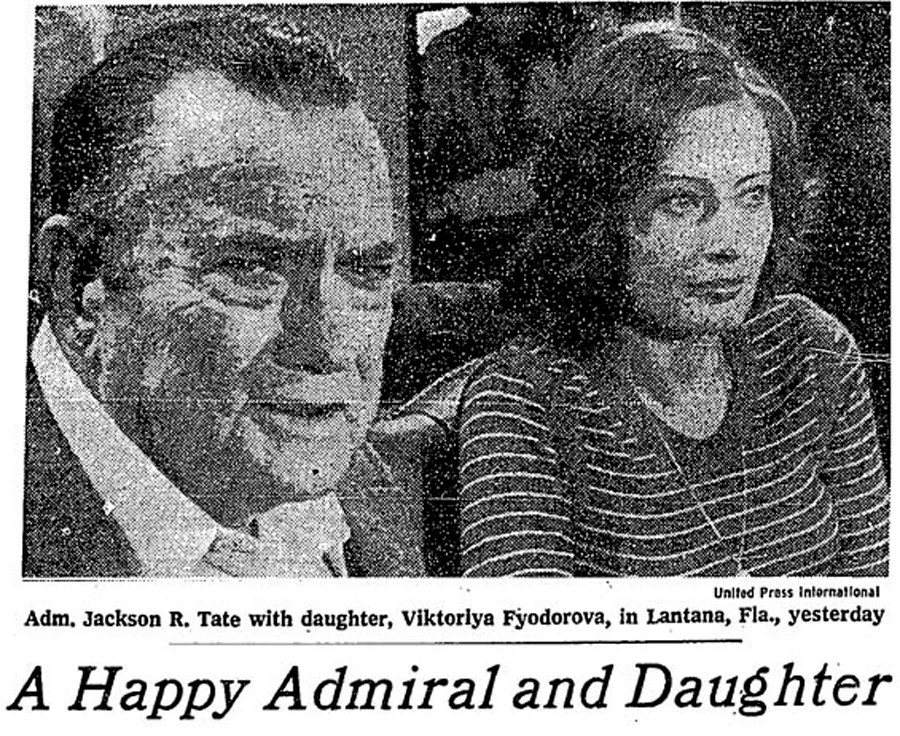 Realizing that the situation was desperate, Victoria turned to American journalists. On Jan. 27, 1975, The New York Times published a long article headlined "A Soviet Child of War Wants to Visit U.S. Father." The Los Angeles Times also published a piece about Jackson, in which he recalled the 30-year-old story.

In search of a scoop, a journalist with the National Enquirer weekly, Henry Gris, got in touch with Victoria and decided to help her to come to the U.S., while the weekly promised to pay for her accommodation, tickets, and other expenses in exchange for an exclusive right to publish materials about the daughter's reunion with her father 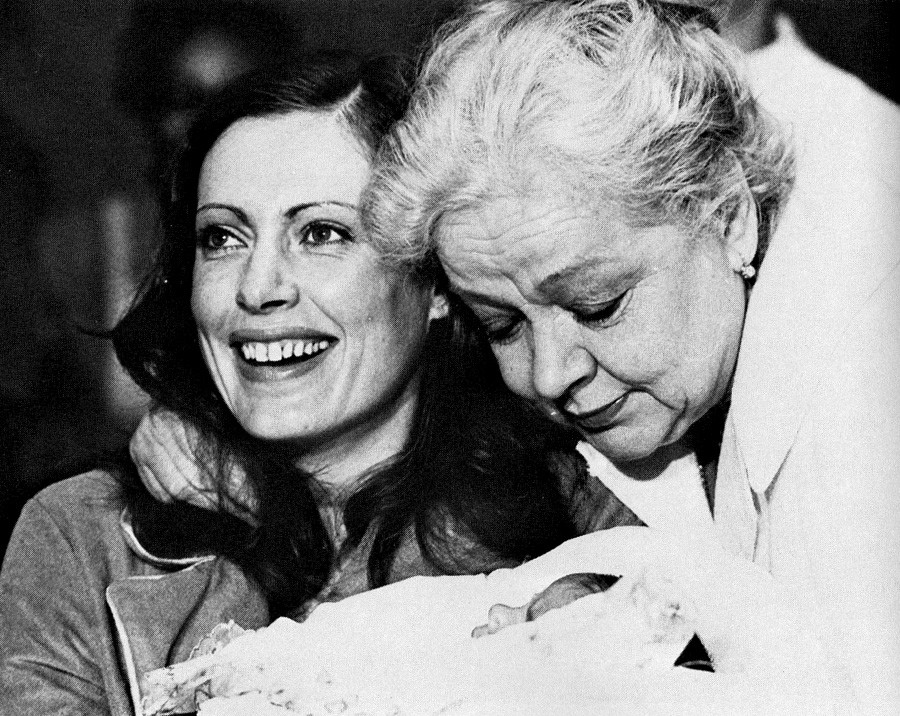 meeting with her father was very touching, and she did not want to return to the USSR. She ended up marrying a Pan American World Airlines pilot and remained in America. Zoya was granted a visa to travel to the States once a year, and in 1976 she finally met her beloved Jackson, two years before his death from cancer 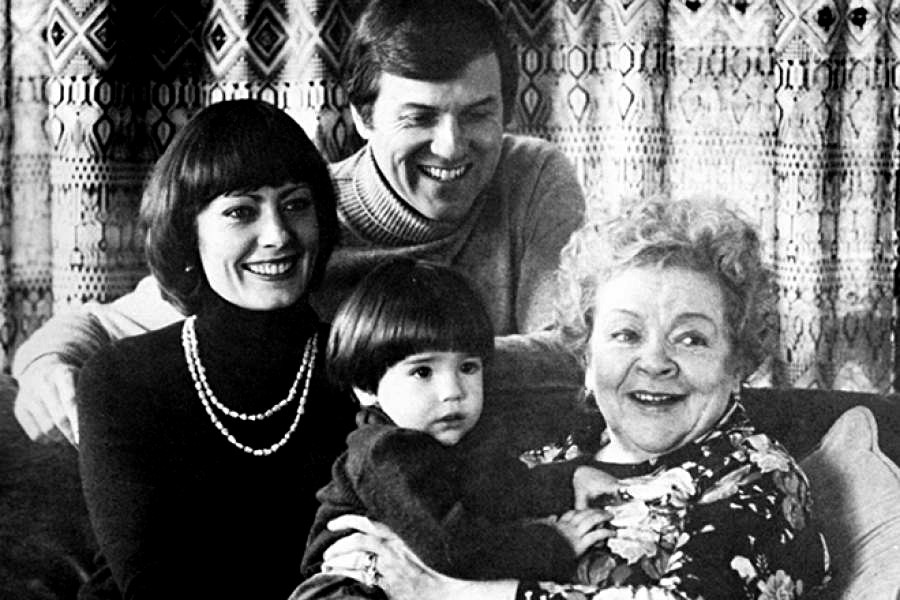 more: The mystery of Soviet Romeo and Juliet revealed after years