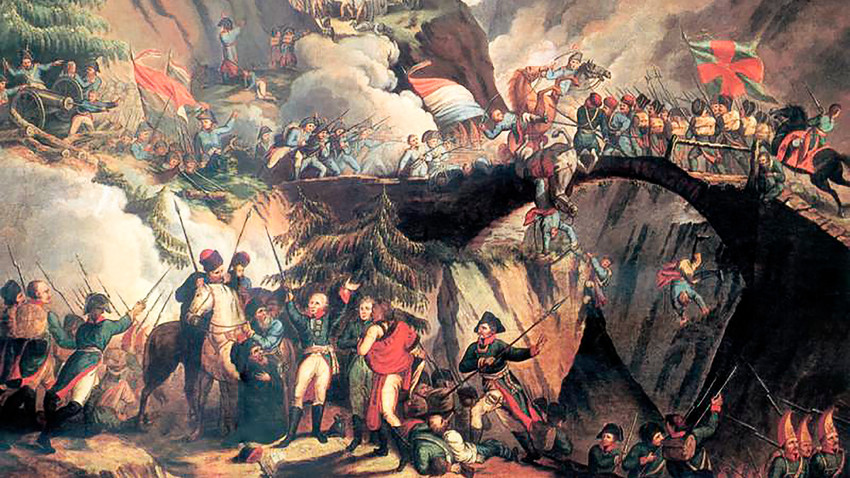 'Defeat of the French at the Devil's Bridge by Suvorov'

“In 1799, the Russian tsar ordered a victorious general to withdraw from the battlefields in Italy and head for Switzerland to fight the French. This general was Alexander Suvorov. The dramatic campaign that he fought in the Swiss Alps soon became the stuff of legends that lives on today,” is how a Swiss museum introduces an exhibition about the Russian commander on its site.

At the time, Russia joined hands with Austria and Britain to combat French revolutionary armies that were subjugating one country after another on the continent. In Italy, Suvorov who never lost a single battle several times defeated the French, the gains of Napoleon’s previous victories there 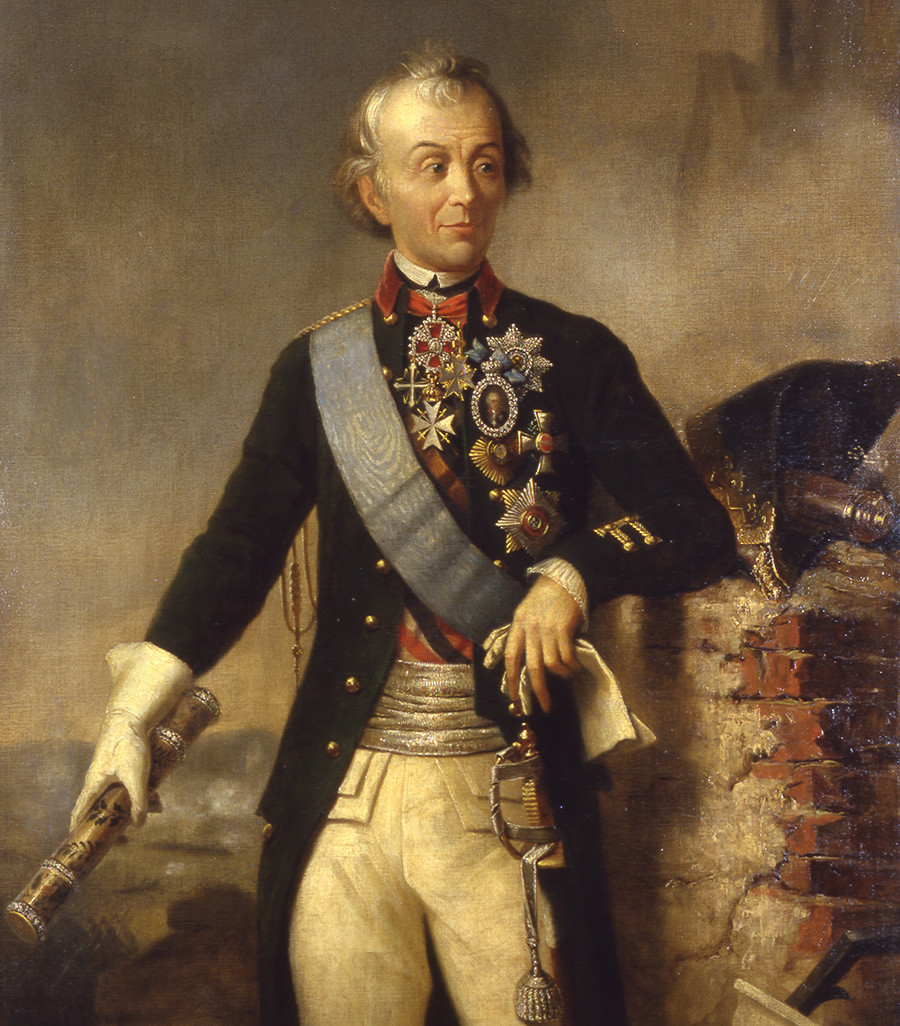 , however, disliked Russia’s growing position in Italy and insisted on sending Suvorov’s troops to Switzerland to unite with Russian and Austrian regiments there, and to fight the French army of General Andre Massena. To get there fast, the Russian commander chose the road through an Alpine pass that was serpentine, narrow and controlled by the French. Suvorov’s plan looked like a suicidal mission, but he said: “Where a deer will pass, so will a Russian soldier; where a deer will not pass, a Russian soldier will pass no matter what.”

Suvorov and his 20,000 troops began by battling their way to the St. Gotthard Pass where they managed to defeat the French. But they faced a major challenged when they came to the so-called Devil’s Bridge (Teufelsbruecke), which is very narrow and spans a rapid mountain river. The bridge had also been severely damaged by the French. 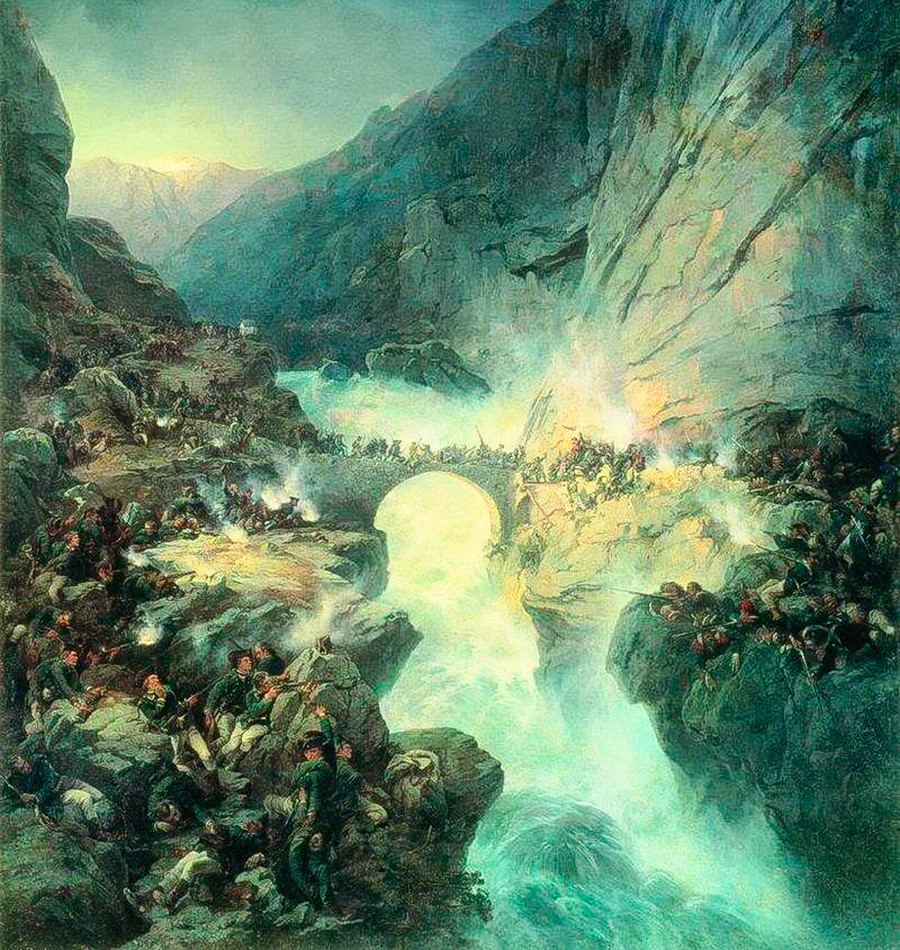 “But this does not stop the victors. Officers [find planks] and tie them with scarfs, and soldiers run [on the bridge] coming down from the peaks to the abyss to reach the enemy and defeat him everywhere,” Suvorov later wrote to Emperor Paul I. The planks had been taken from a nearby barn.

When the Russian troops, hungry, frozen and bleeding after crossing the bridge under French fire, arrived at the place named Altdorf another surprise awaited them. There was no road further, but only two mountain trails that today one needs special equipment to cross. Suvorov blamed his Austrian allies for not telling him anything about the route.

‘But we are Russians’

The exhausted army had to cross a pass that was 2,000 meters in altitude, all the while resisting French attacks on their rear.

“One had to have an iron will to make the decision to go from Altdorf. To take that route required having unlimited faith in the troops,” later wrote Russian Imperial Defense Minister Dmitry Milyutin.

Many men lost their lives falling off that mountain trail. Many horses and much ammunition were also lost, and just when they thought they had achieved the impossible and reached their destination, the Muotathal Valley, another stroke of misfortune awaited. The Russians were defeated by the French after the main part of the Austrian army had abandoned them. Suvorov had nowhere to go. And that was not all: his regiments was surrounded in the valley by the more numerous troops of one of Napoleon’s future marshals - Andre Massena 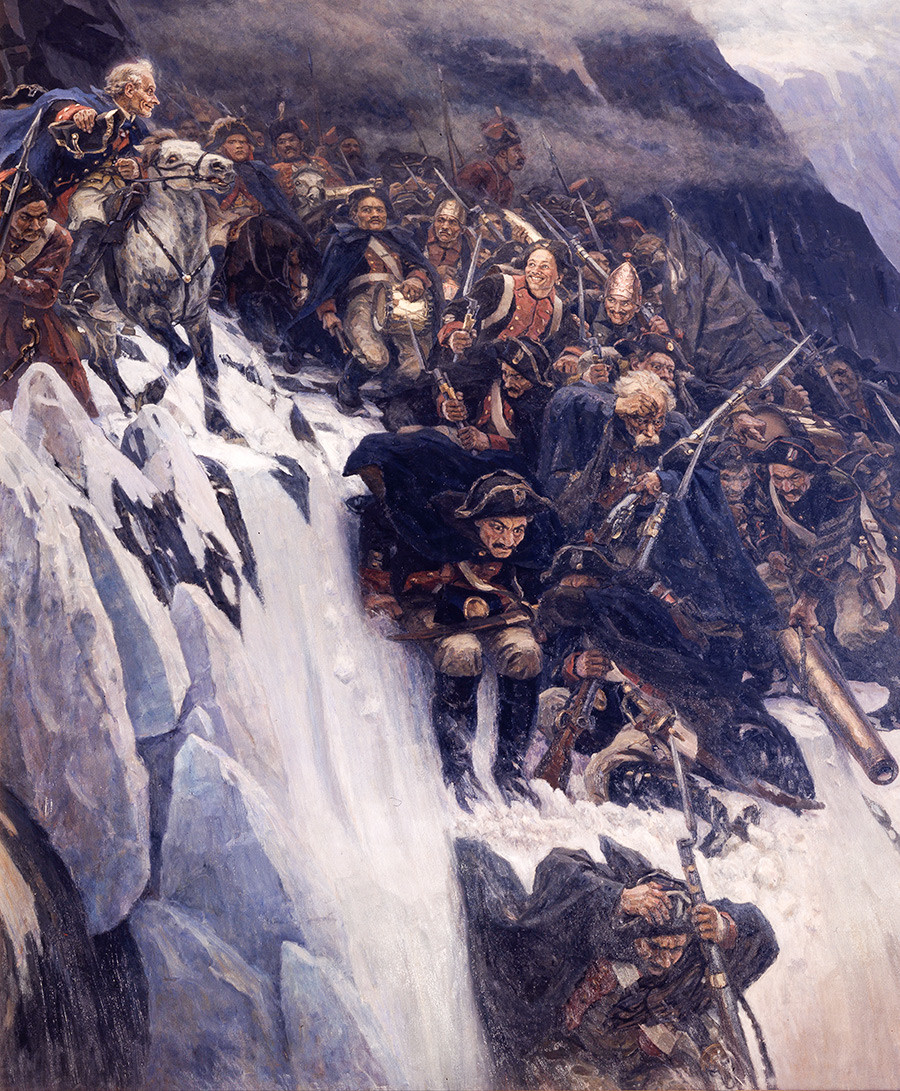 'March of Suvorov through the Alps'

felt the need to address his officers. “We are surrounded by mountains… surrounded by a strong enemy who is proud of his earlier victory. [It’s been a long time] since Russian troops were in a situation so threatening… We cannot get any help. We can only rely on God and on the extreme bravery and dedication of our troops. We will encounter hardships unseen in the world!... But we are Russians! God is with us! Save the honor of Russia and its Emperor! Save his son,” passionately exclaimed the commander, referring to the fact that Paul’s son, Constantin, was in the ranks of Suvorov’s army.

On Oct. 1 the bulk of Massena’s army, which was twice the size of the Russian force, launched an attack. The Russian counterattack, however, was quick and so fierce that the French were smashed. Massena himself barely escaped capture by a Russian soldier who took him by the collar and tore off one of his . The French were again defeated and suffered heavy losses.

Suvorov managed to break out of the blockade with 75 percent of his army. Milyutin emphasizes: “That unlucky campaign brought more glory to the Russian army than the greatest victory.”

“I would trade all my victories for Suvorov’s Swiss campaign,” confessed Massena (link in Russian).

Today, there are six museums along the route of Suvorov’s march in Switzerland.