Boris Yefimov: The political cartoonist who outlived both the Tsar and the Politburo

History
Alexey Timofeychev
Born a few years after Russia’s last emperor, Nicholas II, ascended the throne, Boris Yefimov outlived not only the Tsar but almost every Soviet leader, as well as the USSR itself. With a life that spanned 109 years, he was the most acclaimed and famous Soviet political and social cartoonist. 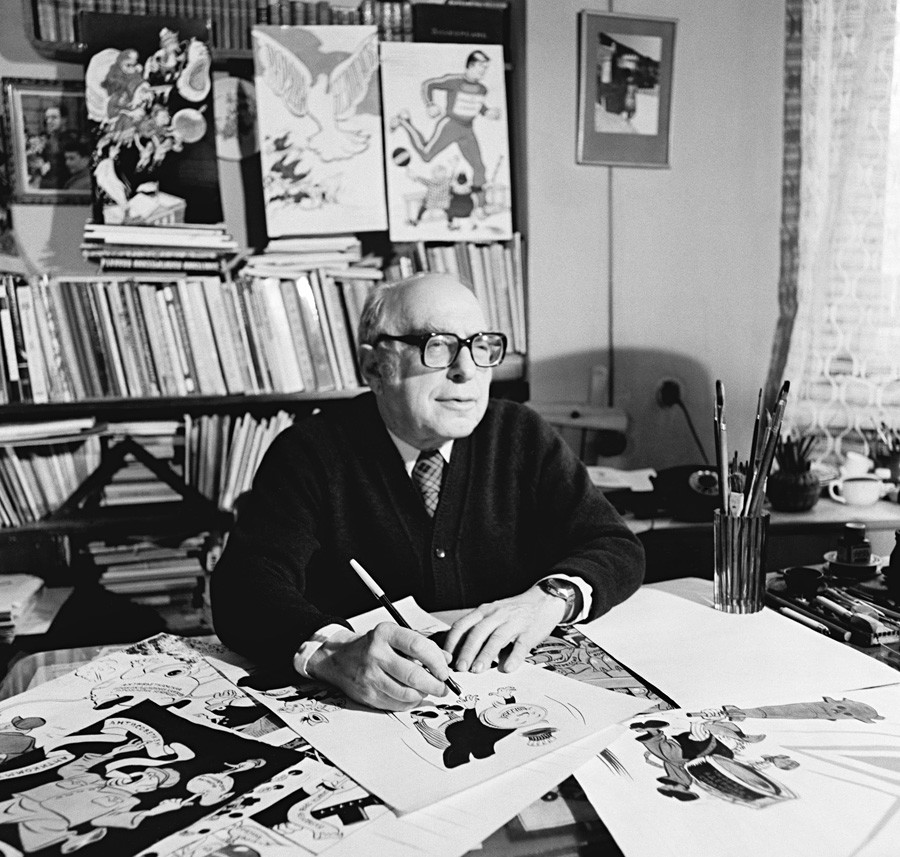 Boris Yefimov published his first cartoon in Imperial Russia in 1916. Born with the last name of Fridlyand, he changed his surname during the Civil War while living in Kiev, where anti-Jewish sentiments were strong. 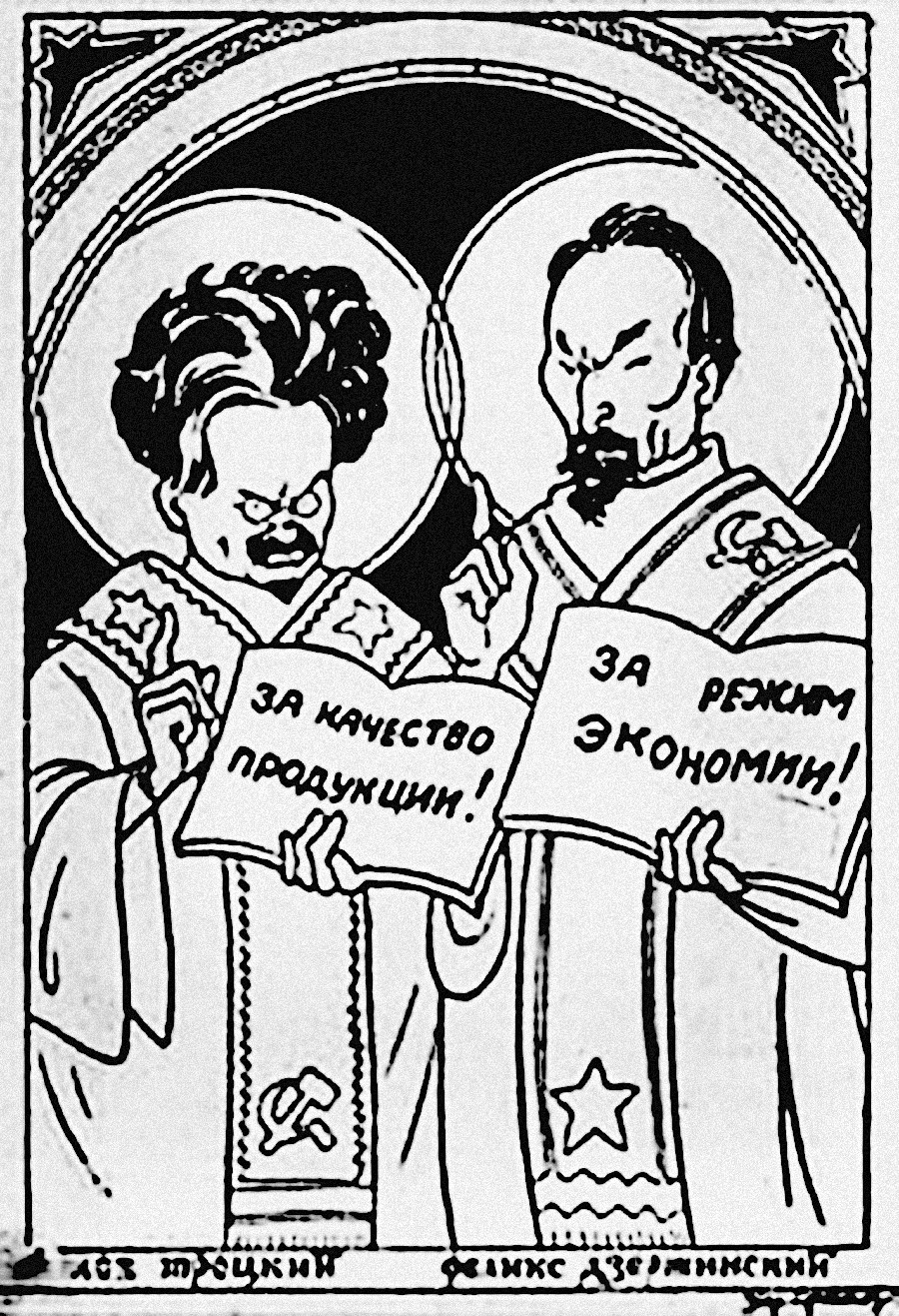 Both Leon Trotsky and Felix Dzerzhinsky, who in the mid-1920s served as head of the Supreme Soviet of National Economy, were depicted as saints. The former is marked by the words: “For the Quality of Production;” while the latter: “For the Regime of Savings”

In the early 1920s, Yefimov moved to Moscow where he met top Soviet officials such as Nikolai Bukharin, Pravda’s editor-in-chief, as well as Leon Trotsky, who was in charge of the Red Army. Yefimov later said that he greatly respected Trotsky who wrote an introduction to his first published collections of cartoons. 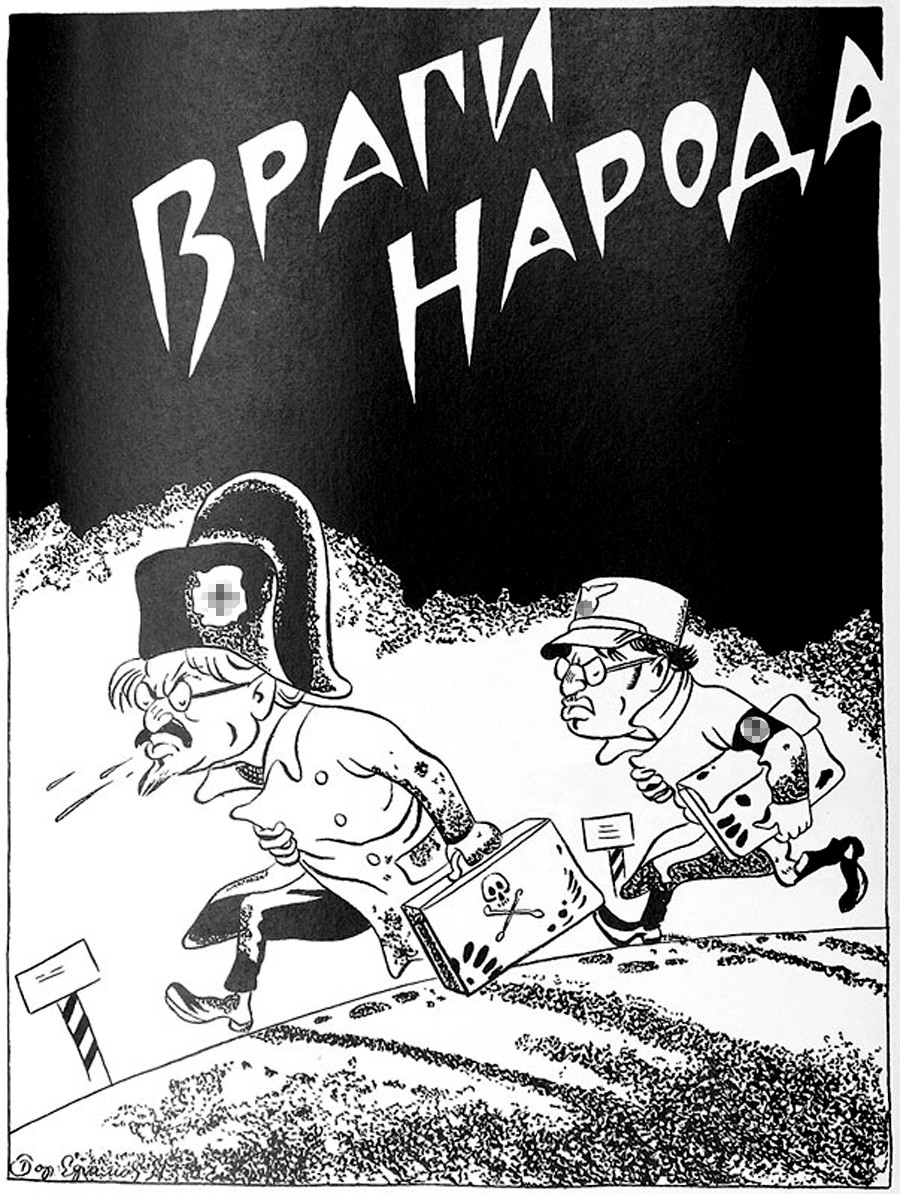 Leon Trotsky flees the USSR under the caption: “Enemies of the people”

By the late 1920s, however, Bukharin and Trotsky had lost in the bitter struggle for power and were declared “enemies of the people” by Joseph Stalin. Yefimov, who worked for central Soviet newspapers, now had to depict those fallen men in a negative light even though he previously admired them. Later, he confessed that if he’d had a second chance he’d never had depicted them as such. He added that he was afraid for his family because they’d most probably be jailed and killed if he had refused the task. 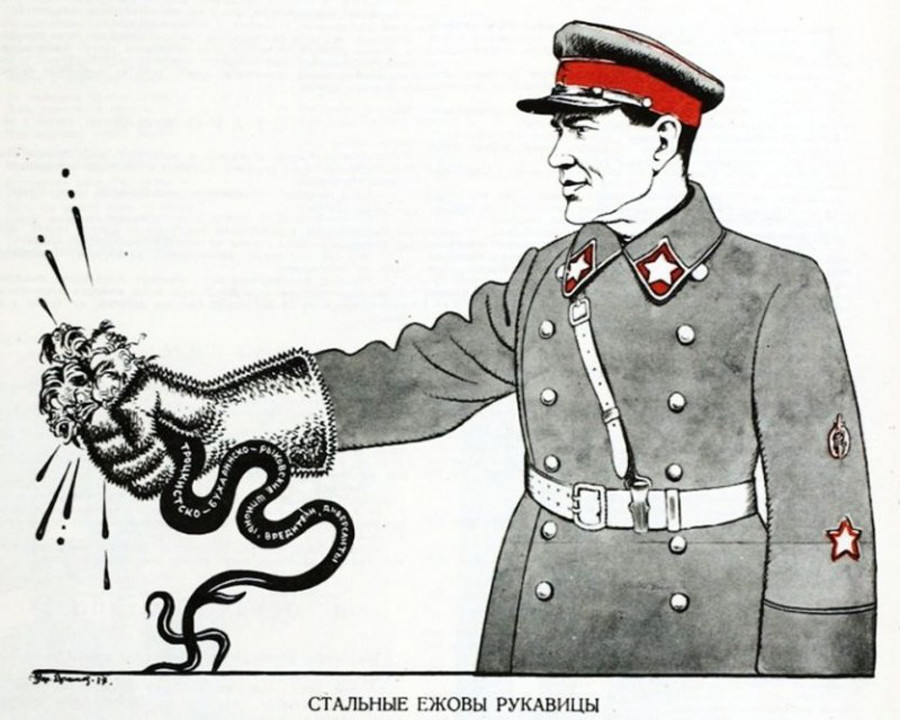 These were not empty words. Yefimov’s brother Mikhail Koltsov, a famous Soviet journalist who covered the Civil War in Spain and became a prototype for a character in one of Hemingway’s novels, was accused of spying for foreign secret services and sentenced to death. “This evil, senseless death of the closest person was a catastrophe,” said Yefimov in an interview almost 60 years after the tragic event. 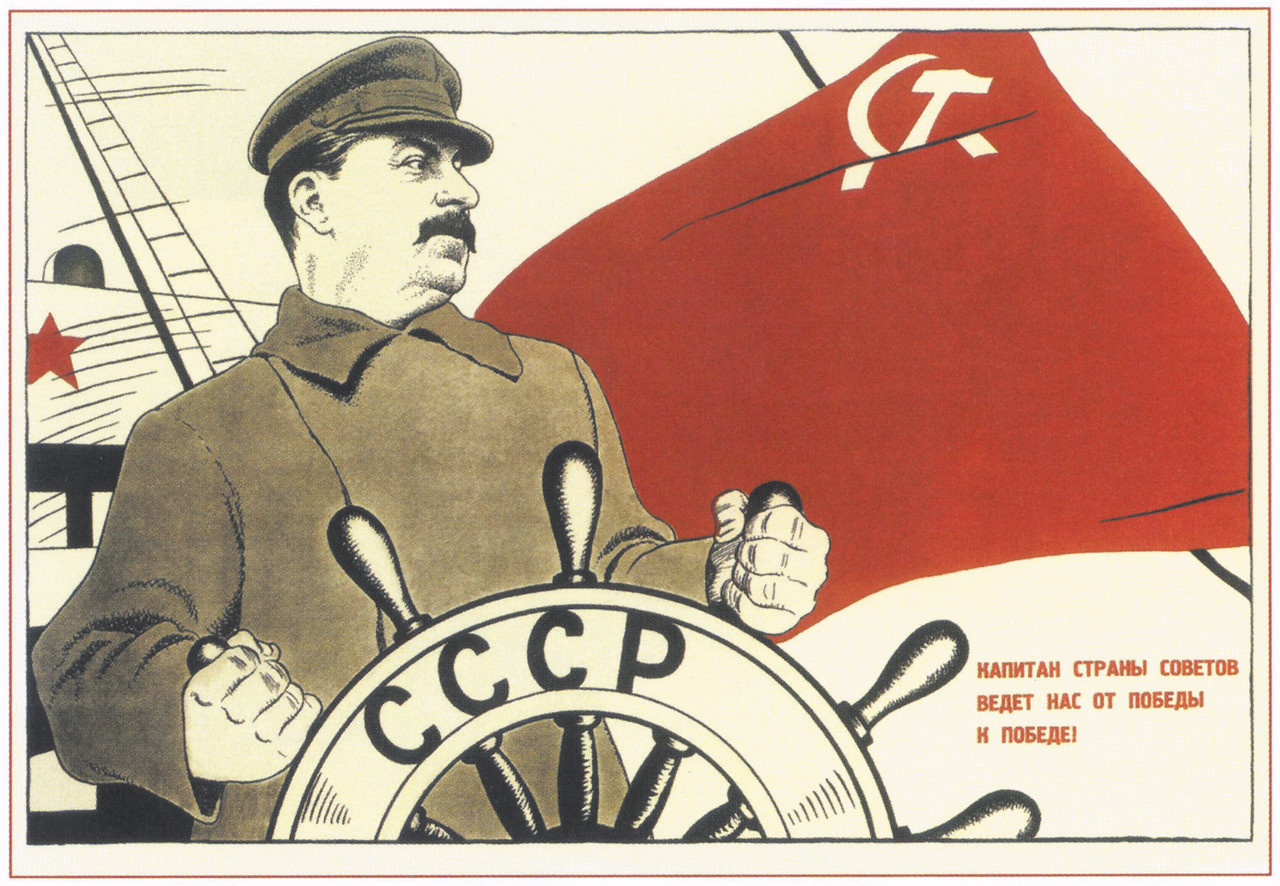 Yefimov’s attitude toward Stalin was controversial. One one hand, Stalin arrested Yefimov’s brother, but on the other hand, he did not harm the cartoonist. “When Beria [head of the security services] showed Stalin a piece of paper with Yefimov’s name, he said: “Do not touch him!” Stalin appreciated Yefimov as a caricaturist,” according to the artist’s grandson. Yefimov called the Soviet leader a “spontaneous phenomenon to whom one cannot apply such notions as ‘good’ and ‘bad.’ He also said he felt “reverence” for the Soviet leader even after his brother’s arrest. 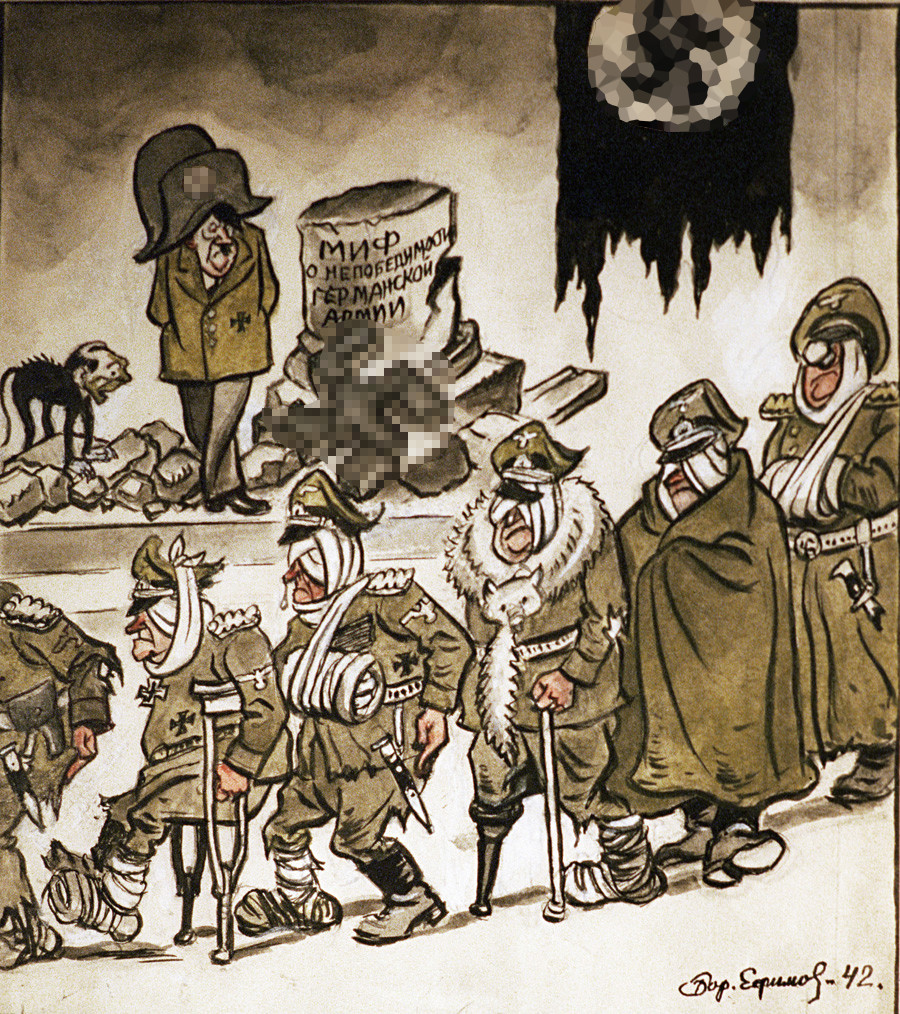 Hitler’s troops are depicted just like Napoleon’s army retreating from Moscow in 1812. “The myth of invincibility of the German army,” says the inscription

Yefimov drew many caricatures during World War II, and it was said that Adolf Hitler was enraged by his works. Yefimov said the Nazi leader placed him on a special “Find and hang” list. 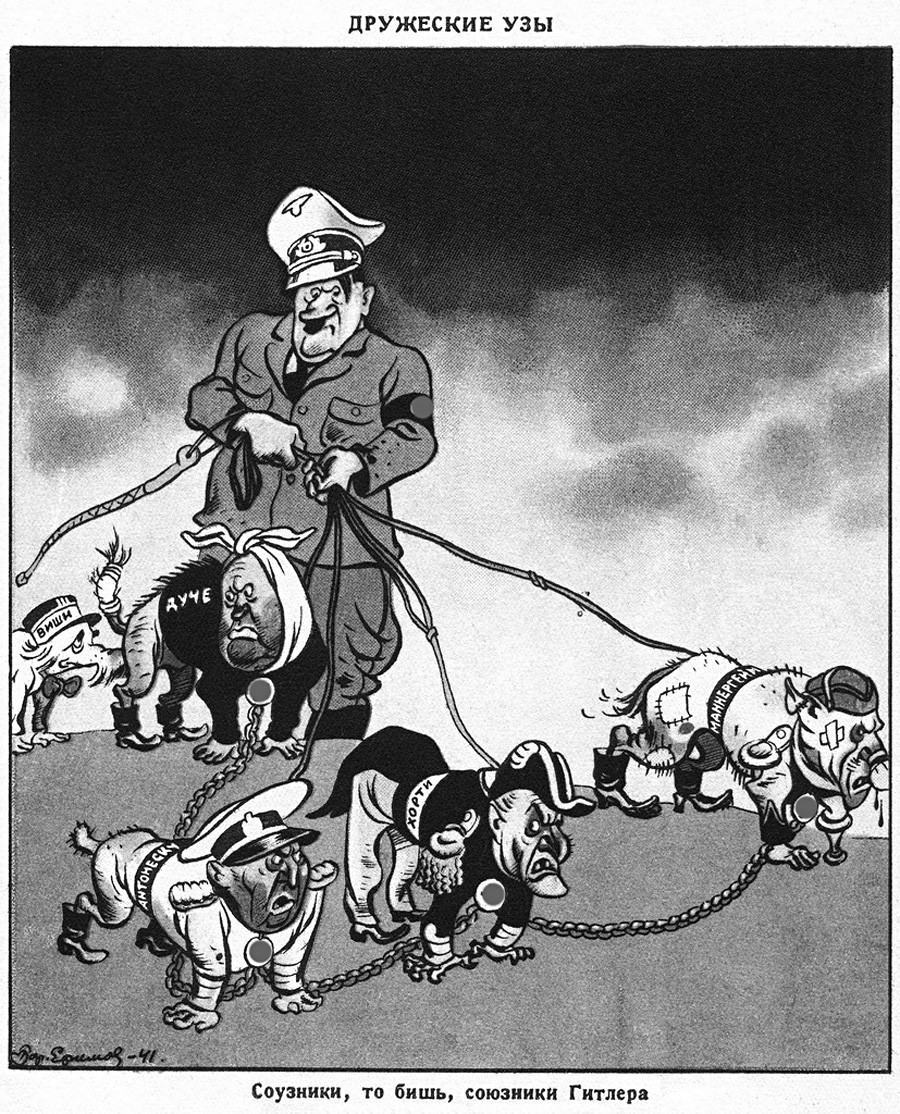 Yefimov’s anti-fascist drawings were immensely popular, and for decades the cartoonist kept many letters that Soviet soldiers sent him thanking him for his work. During the war he also wore a uniform and held a major’s rank. 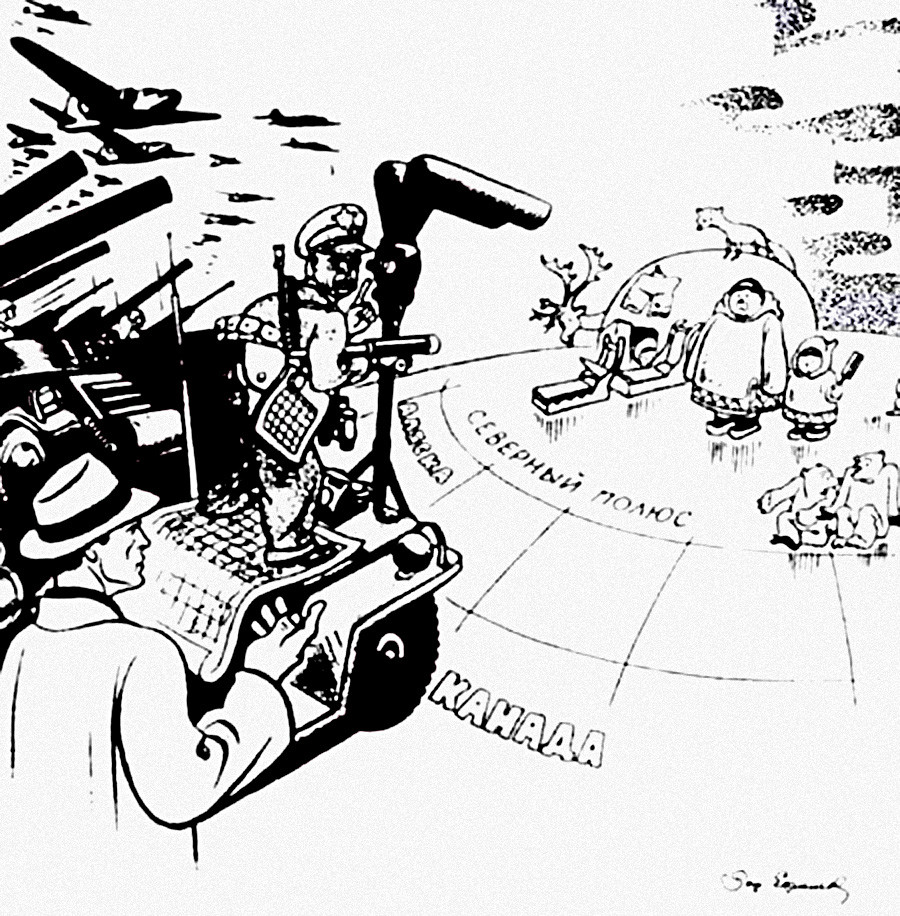 Stalin in 1947 ordered Yefimov to make a caricature that became one of the symbols of the start of the Cold War. It was supposed to be about American military plans to take up positions in the Arctic in order to battle a potential Soviet threat there. Yefimov thought that he had a couple of days to draw it, but at half past three in the morning the telephone rang, and it was Stalin who said that he expected the cartoon completed in 2.5 hours. Yefimov had to hurry. He finished in time, and Stalin liked the final version but corrected the caption to: “Eisenhower defends himself.” As the cartoonist recalled, it became a “sensation” both in the USSR and abroad. According to the New York Times, the cartoon was reported as serious news in the U.S. 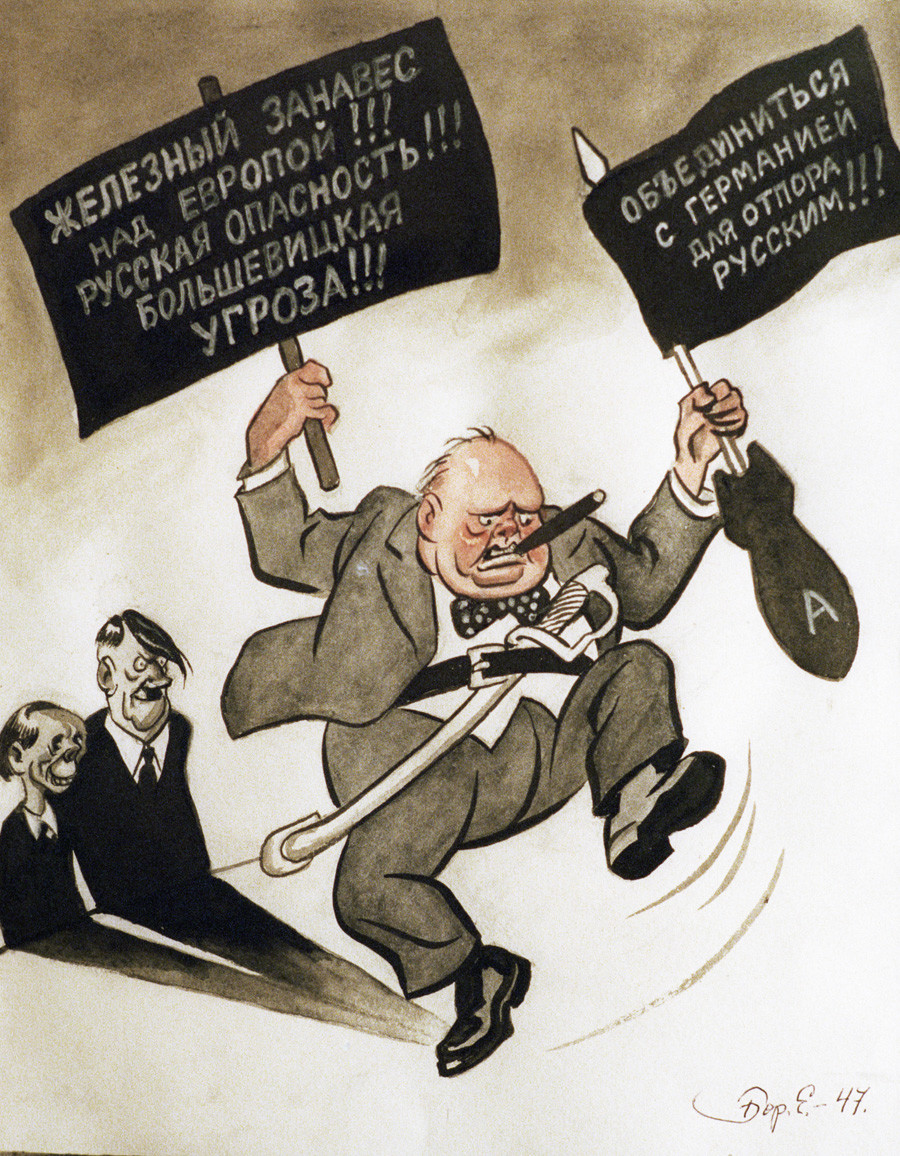 Of the more than 30,000 drawings that Yefimov made, many were devoted to the Cold War. Some say that the way Yefimov and other cartoonists drew Winston Churchill helped to create the popular image of the Western bourgeois-imperialist – a rather corpulent person who always had a cigar in his mouth. At the same time, according to Yefimov, when Churchill visited Moscow during the war Stalin gave the British premier a collection of Yefimov’s drawings. 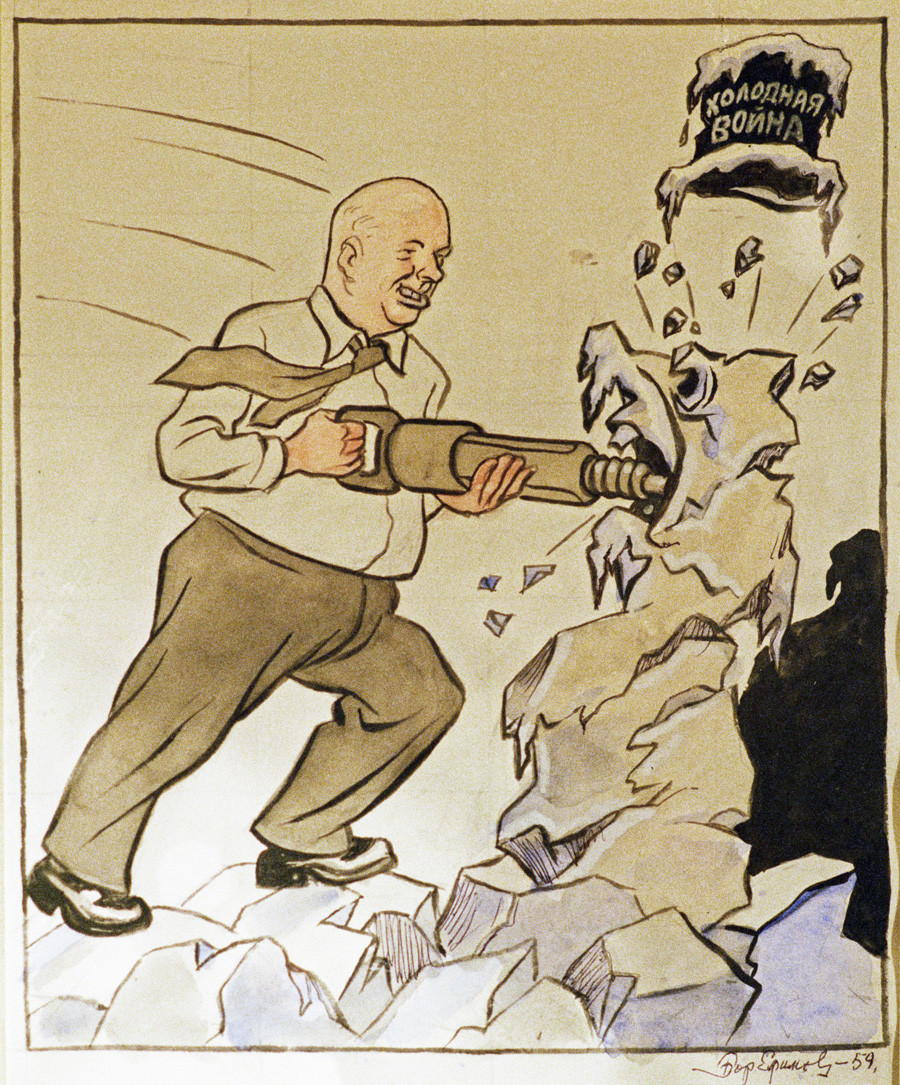 “The miners’ way.” Khrushchev is destroying the Cold War

In his memoirs, Yefimov wrote that he drew only a couple of cartoons about Soviet post-war leader Nikita Khrushchev, and they were not critical. “No surprise that he liked these over-friendly caricatures,” noted Yefimov. 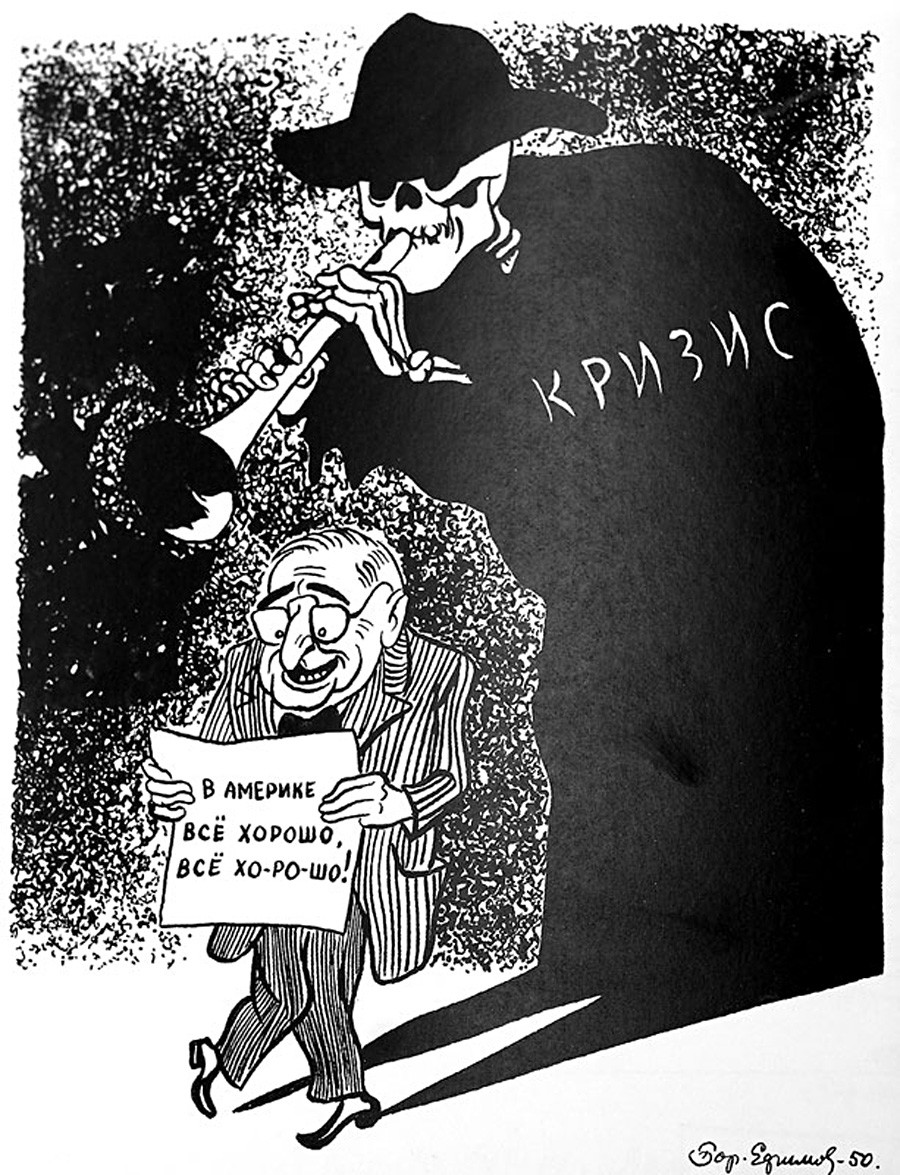 “Crisis” hanging over President Harry S. Truman who sings: “Everything is all right!”

Yefimov was awarded a Stalin’s Prize for his series of cartoons titled: “For a strong peace. Against the instigators of war.” The drawings were aimed at the Soviet Union’s Cold War enemies. 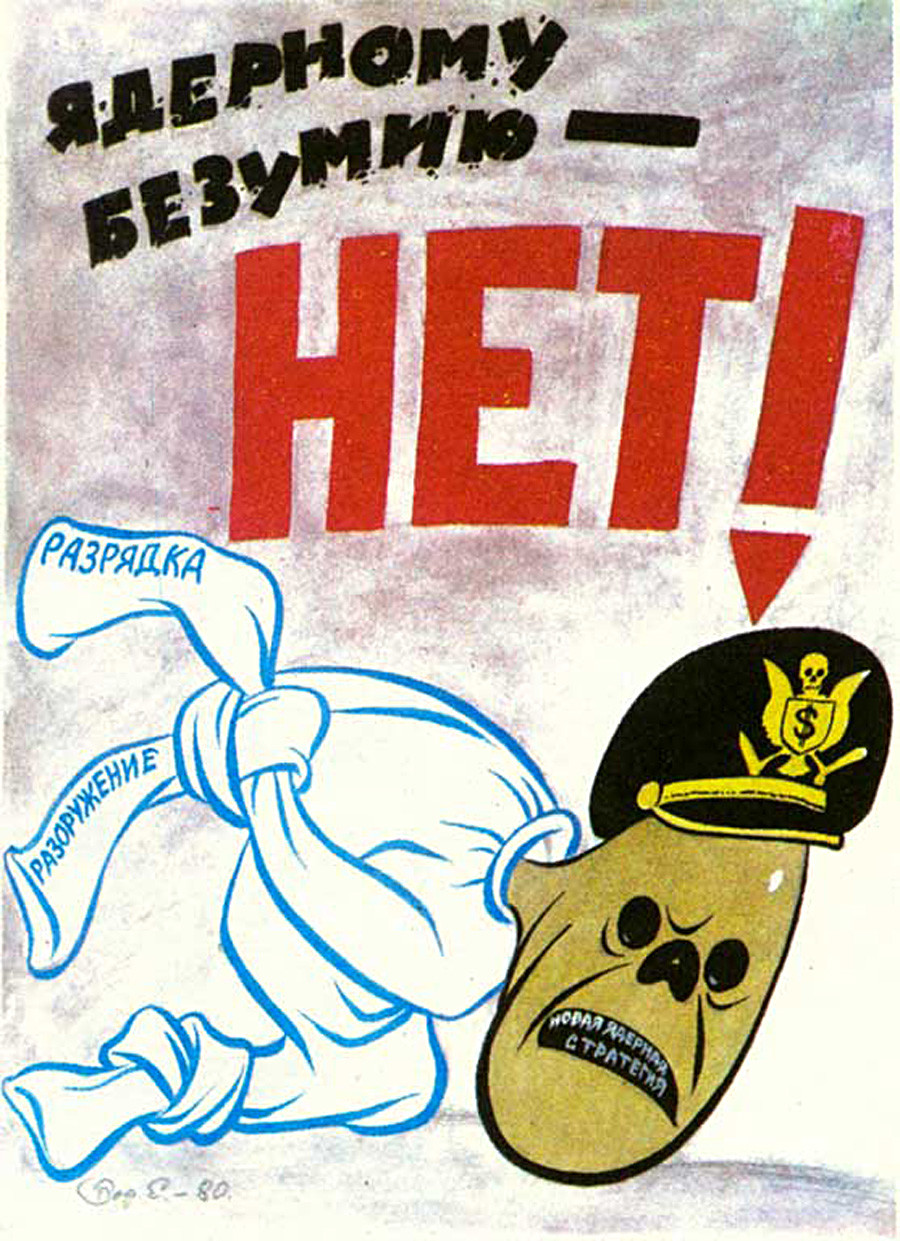 “No, to nuclear madness!”

Yefimov often recalled that the fear of nuclear conflict during the Cold War was extremely real and present. “We understood that a nuclear war meant the destruction of humankind. Every person understands the idea that he or she is mortal, but we expect that after death something will still remain: children or work. The thought that nothing will remain is unbearable for the human mind,” said Yefimov, who lived to see the end of the U.S.-USSR nuclear arms race, dying in 2008.