How have Russian ideological values changed through the centuries? 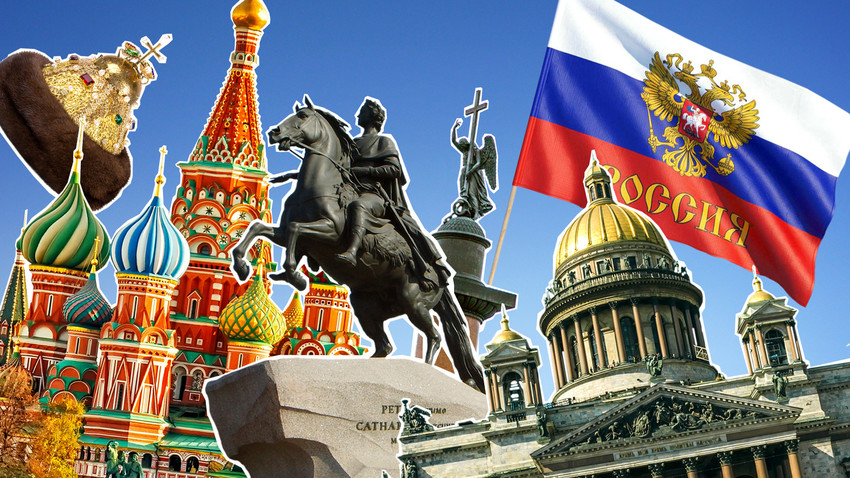 Natalya Nosova
The Russian people have suffered much hardship during the country’s history. Ideology and a belief in something bigger than their reality was often the driving force that inspired Russians to great achievements. We are looking at the Russian ideology over the last 5 centuries and beyond. 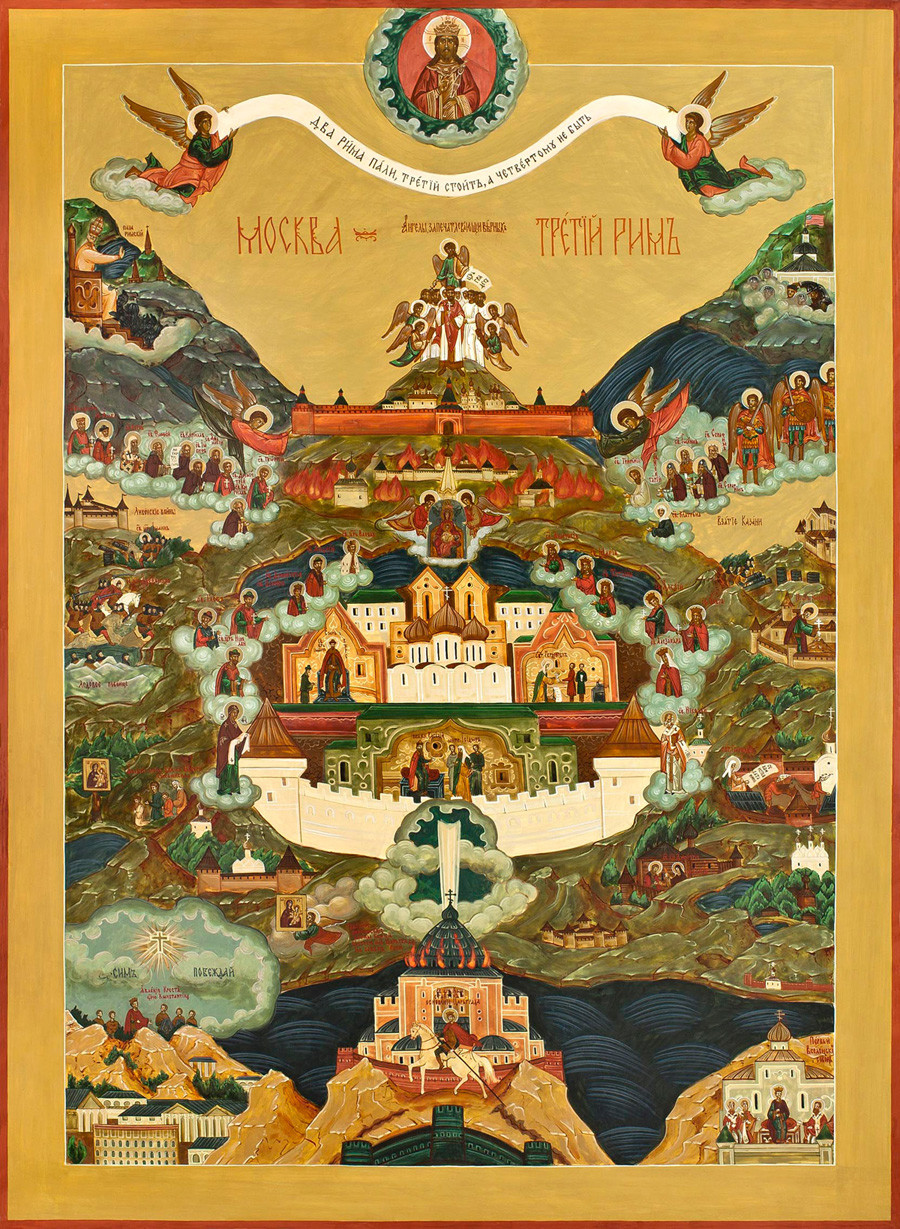 the mid 15th century the Byzantine Empire fell, but just before that happened Sofya Paleolog, the niece of the last Byzantine emperor, went to Moscow to marry Grand Prince Ivan. Several decades later, scholar and monk Philotheus of Pskov (1465–1542) came up with the concept of Moscow as the “Third Rome.” The first one was Rome itself; the second – Constantinople; and the third – Moscow, which was now the last remaining stronghold of Orthodox Christianity.

Moscow inherited Byzantium’s coat of arms, the two-headed eagle, which was the symbol of preservation of the “true” faith. The concept was rooted in eschatological ideas, depicting Moscow as the “last Orthodox Tsardom,” ruled by a pious and wise monarch, who was also the head of the Orthodox Church. This ideology worked well for the institution of Tsarism that was established by Ivan the Terrible.

17th century: Symphonia of church and 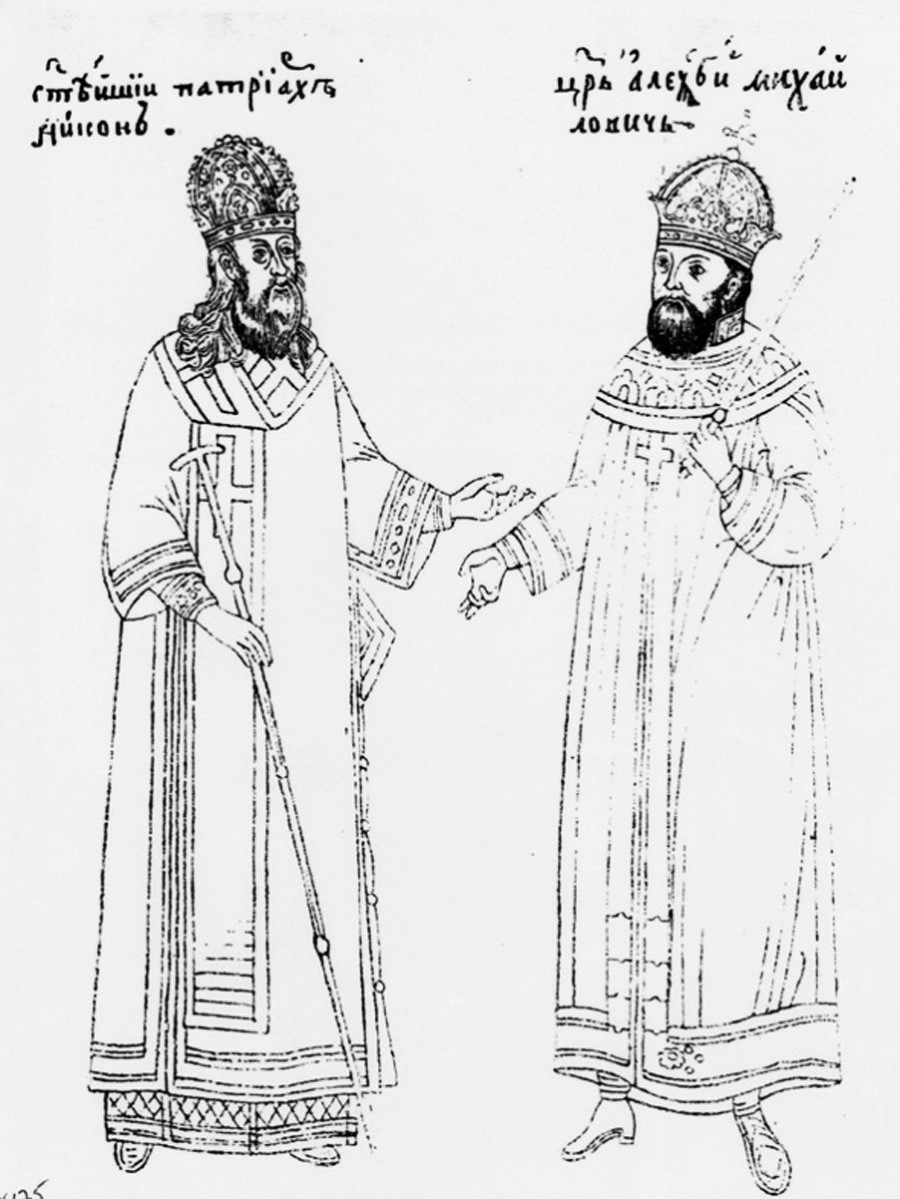 1589, when Job became the first Patriarch of Moscow, the Russian Orthodox Church got its independence from the Patriarch in Constantinople. In the mid 17th century, when Patriarch Nikon commenced his church reforms, he and Tsar Alexis employed the Byzantine concept of “” - the union of ecclesiastical and secular power. While Nikon’s reforms eventually led to a schism in Russian Orthodoxy, and the Patriarch was eventually deprived of his power, by the late 17th century the Church was on strong ground financially and ideologically.

18th century: Service to the state, loyalty to the 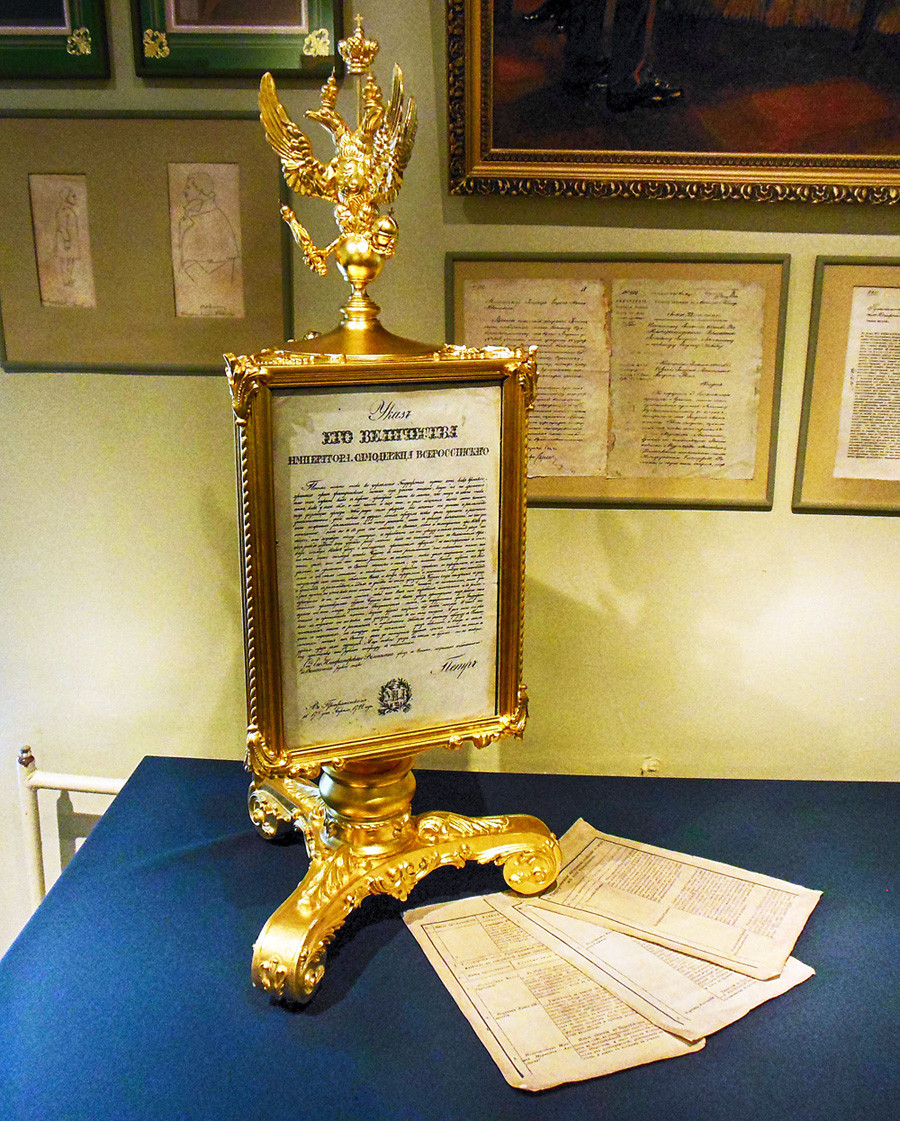 "Zertsalo", a wooden frame containing texts of three Peter the Great's laws on civil service. Such objects were compulsory for any Russian public institution until 1917.

the Great created a new state ideology during his reforms, enacting far-reaching changes across Russia. After visiting Europe, he promulgated laws that obliged every nobleman to serve the state, obey the Tsar’s orders unconditionally, but at the same time adhere to civil law, which was the basis of the state. When Peter was proclaimed emperor he abolished the office of the Patriarch, and again concentrated secular and religious power in the hands of the Tsar. 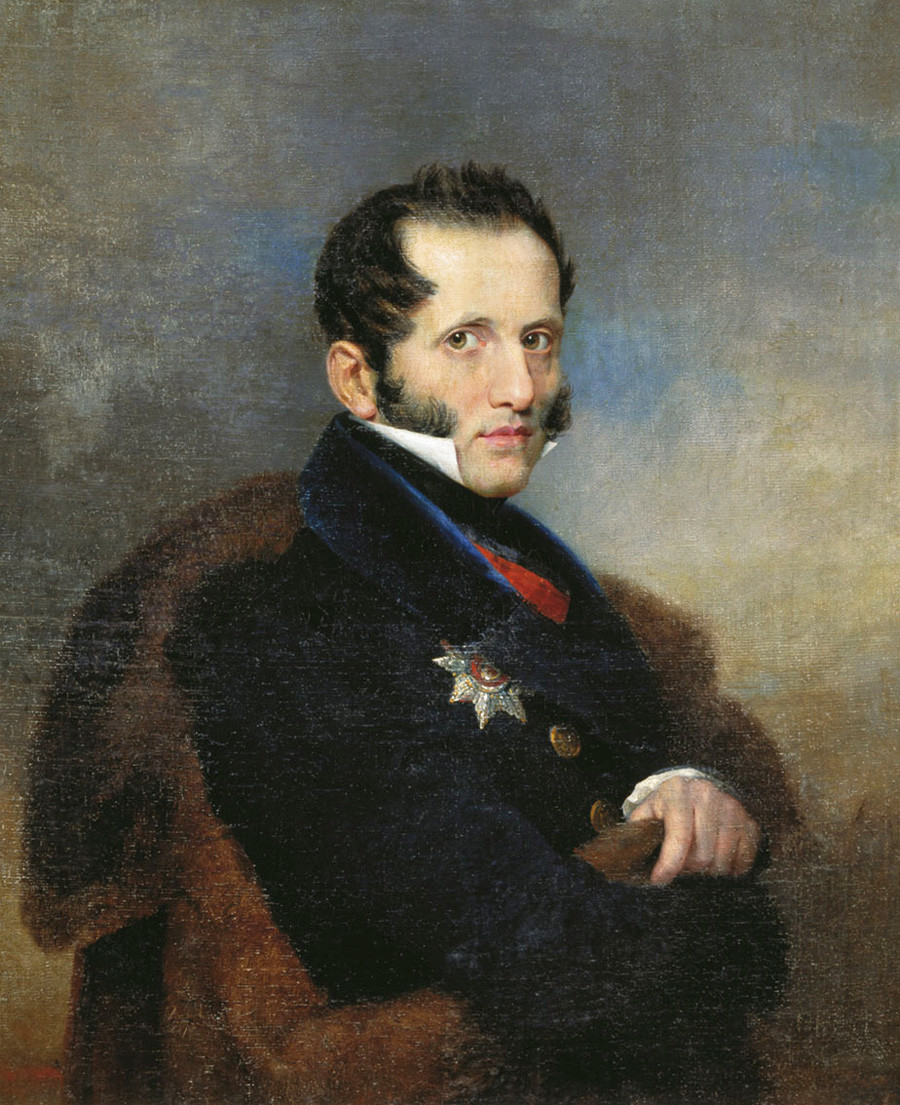 Faith, Tsar and Fatherland” was the semi-official motto and call to arms in the Russian army during the Napoleonic wars – an answer to the French republican motto of “Liberté, égalité, fraternité.” In 1833, Minister of Education Sergey Uvarov introduced “the triad”: Orthodoxy, Autocracy and Nationality – clearly an elaboration of the famous military motto.

This first official ideology, supported by Tsar Nicholas I and many Russian intellectuals, including writer Nikolay Gogol, united the previous national ideas. The triad called for: 1) preservation of the Orthodox faith and protection of the Church; 2) loyalty to the state in its Autocratic form, where the Tsar was the ultimate ruler and Father of the land and people; 3) preserving national traditions and equal civil rights for all nations in Russia. This triad remained the official ideology until the fall of the empire in 1917. 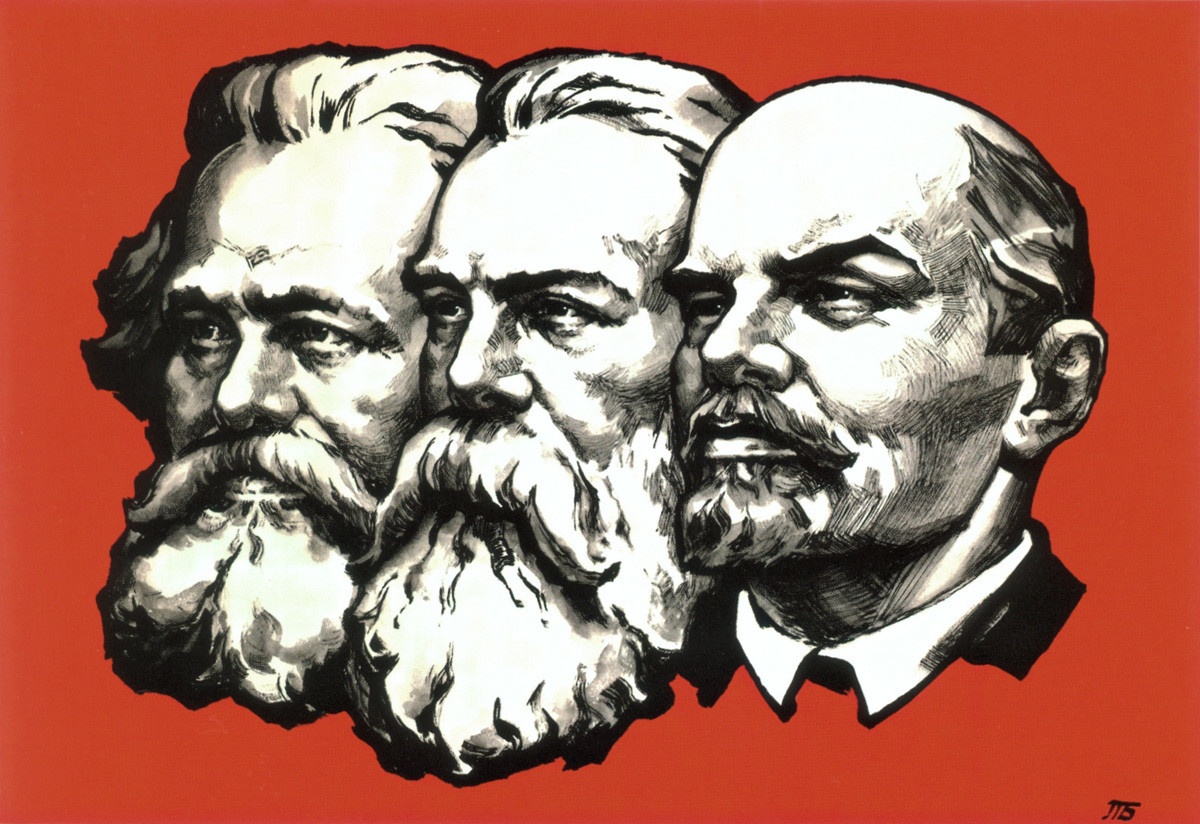 Bolsheviks had to devise an entirely new ideology for the Russian people. In the new era, Orthodoxy was supplanted by communist ideas, with Lenin, Marx, and Engels taking the vacant place of the Holy Trinity, now banned along with all religion. After his death, Lenin became the eternal leader (“Lenin lived, Lenin lives, Lenin will live forever!”), and instead of the Church, the Communist Party became the body uniting all people of the world (“Workers of the world, unite!”). The Party also embodied people’s power, and Autocracy was officially abolished. In reality, however, power remained in the hands of a single leader, just as it was before.

The “nationality” concept was transformed into the goal of the USSR as an international state uniting different nations in the quest for a free and just world (“the USSR is the stronghold of peace”). Unlike the triad this new ideology had global ambitions – for a long time, the Soviet Union set its sights on the world socialist revolution. 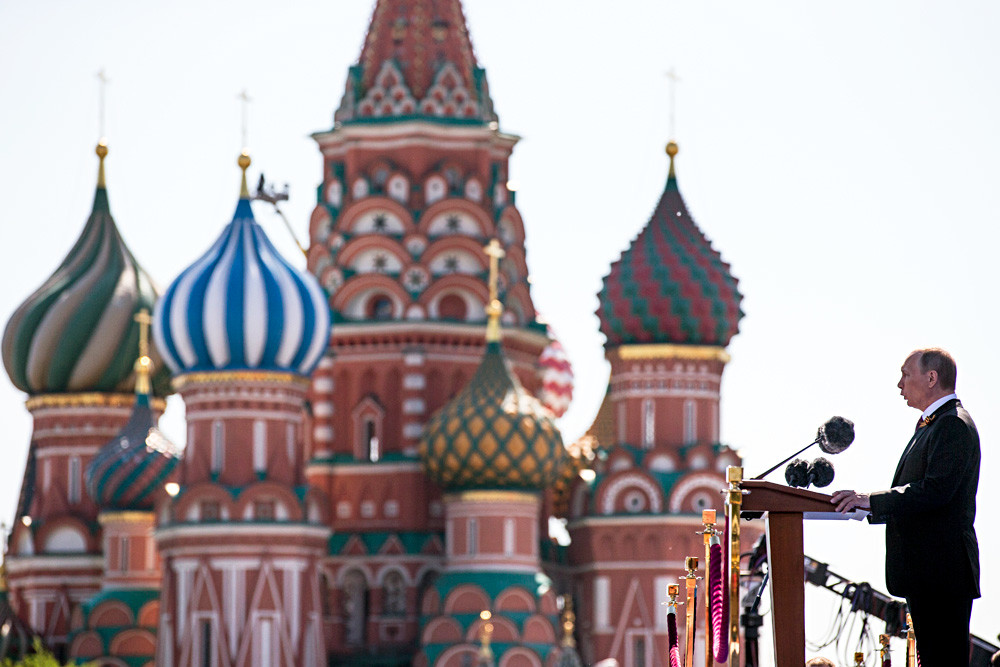 Vladimir Putin holding a speech at the Red Square in Moscow.

The Communist ideology, however, came to a dead end when the 1980s economic and political crises shook the USSR, bringing it suddenly crashing down. The obsolete Soviet ideology was tossed on the dustbin of history, and the newly-born Russian Federation spent years without any officially approved ideology until Vladimir Putin took charge. Today’s Russian ideology is almost wholly based on his speeches and the values he draws attention to, the foremost idea is the well-being of the Russian people. This goal, according to Putin, can be achieved by employing three concepts.

First – the unity of the Russian people (the ruling political party is called “United Russia”) – a reinstallment of the “nationality” concept. “Our unity is the strongest foundation for future development,” Putin said in 2018 in his annual address to the Federal Assembly.

Second is patriotism, which “must be based on our history,” and is reinforced by “the development of a healthy way of life that includes physical exercise and sports” to “achieve top results, and pursue victory.”

Third, this all can’t be done without a firm foreign policy: “Russia is a country with more than a thousand years of history, and almost always it has enjoyed the privilege of waging an independent foreign policy,” Putin said. He also emphasized repeatedly that today’s world is multi-polar, and there can be no return to the bipolar times of the Cold War. In a nutshell, today’s Russian ideology is a developed and contemporary version of the 19th-century triad, the longest-standing national idea in Russian history in recent times.