History
Nikolay Shevchenko
Sergey Guneev/Sputnik
North Korean dictator Kim Il Sung could have lived his life in Russia, but the Soviet military had other plans.

When in the tiny Russian settlement of Vyatskoye, on the banks of the Amur River, which divides the Russian Far East and north-east China, a son was born to a Soviet army captain, he was given the Russian name Yuri, despite his parents both being ethnic Koreans.

Today, North Korean schoolchildren are taught that the first child of the future founder of their country, Kim Il Sung, was born in February 1942 in a log cabin atop the highest mountain on the Korean peninsula, where his father headed a partisan unit. In actual fact, in February 1942 the fate of Kim Il Sung was bound far more closely to Russia than his native Korea.

Guerrillas in the mist

The Soviet odyssey of the first dictator of the future North Korea began with a raid by Korean partisans against Japanese forces occupying the Korean peninsula.

Japanese colonial policy was fiercely resisted by local inhabitants, and some had formed guerrilla groups to fight off the invaders. Among them was the future founder of the North Korean state, Kim Il Sung, but back in the mid-1930s very few knew about the young Korean partisan. 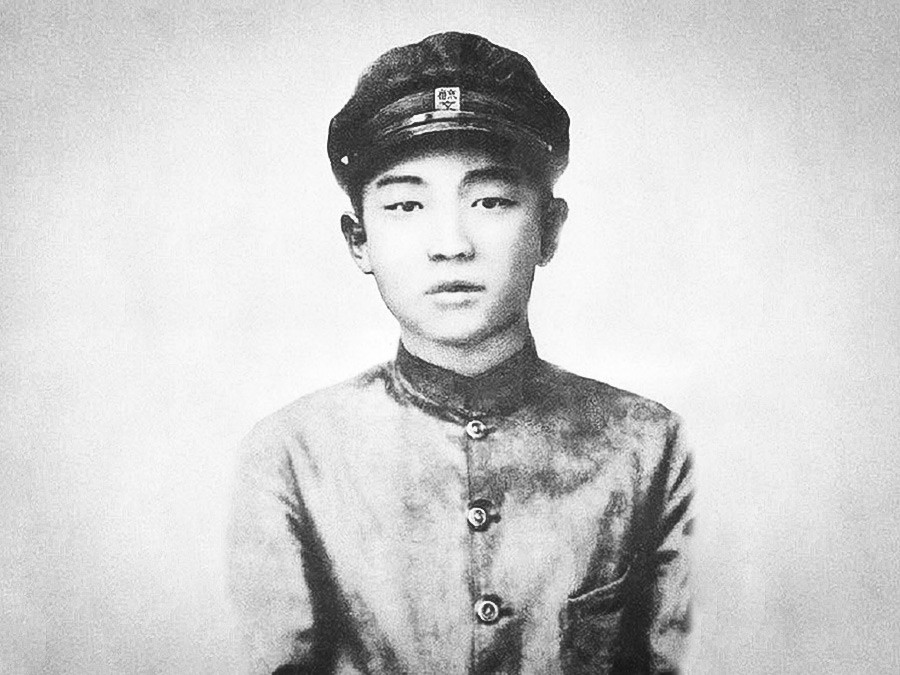 It was after the battle of Pochonbo in June 1937 that the 25-year-old commander came to wider attention. Kim Il Sung’s partisan unit managed to cross the Yalu River and capture several strategic buildings in Pochonbo, killing Japanese police, freeing prisoners, and burning administrative buildings in the process.

The Battle of Pochonbo put Kim Il Sung on the Japanese wanted list, and they launched a full-on manhunt. 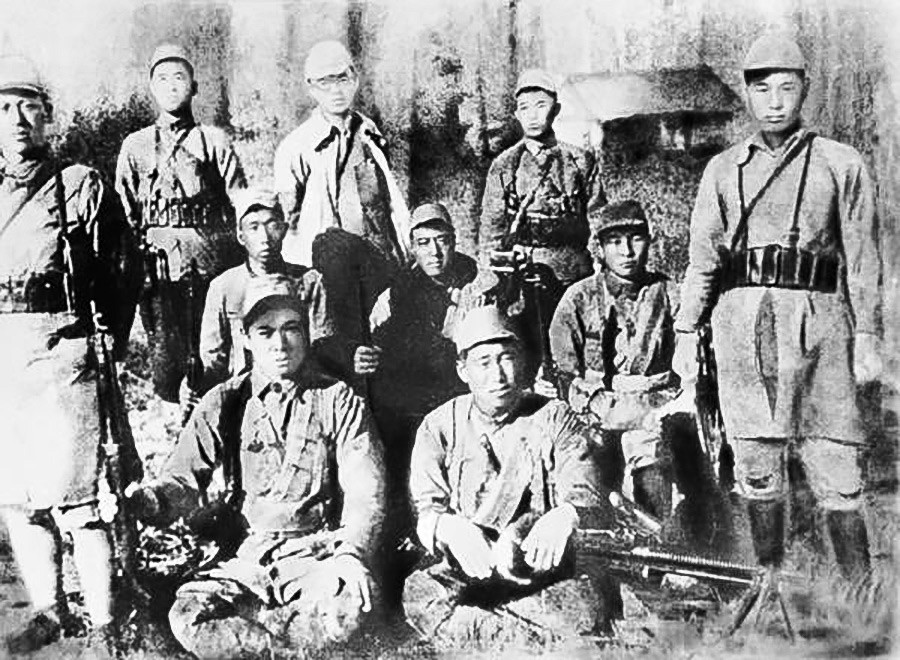 The Japanese were determined to eliminate the partisans once and for all, and sent punitive detachments into Manchuria, which was then the puppet state Manchukuo. Many of Kim Il Sung’s comrades perished in the clashes that ensued, and the resistance dwindled. In late 1940, the situation became critical. To save his and his compadres’ skin, Kim Il Sung led a small group of partisans across the Amur River into Soviet territory to lie low until the storm passed.

And quiet flows the Amur

There was nothing unusual about Korean partisans seeking refuge in the USSR. After being verified by the Soviet authorities, they were usually allowed to stay and put to good use. “Some entered service in the Red Army, while others took Soviet citizenship and worked on farms and, less commonly, in industry,” writes historian Andrei Lankov in his book on North Korea.

After several months in a Soviet camp for partisans while checks were being carried out, Kim Il Sung enrolled at the Khabarovsk Infantry School. For the next two years, he studied military affairs under the command of Soviet officers. 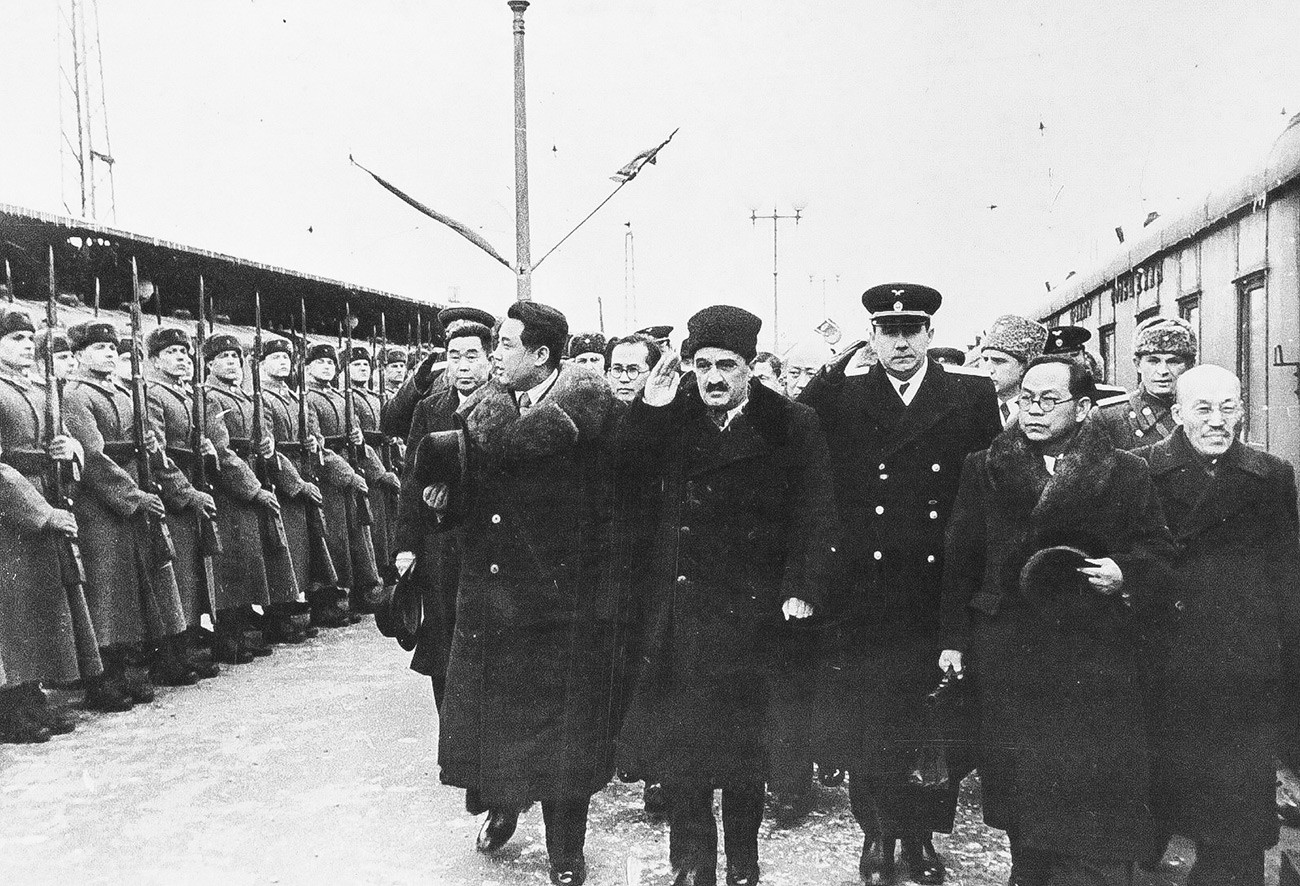 The Archives of Korean History

“Perhaps for the first time after a decade of hunger, fatigue, danger, and being constantly on the move, Kim Il Sung was able to get some respite and feel safe,” writes Lankov. It was at Khabarovsk that his spouse and female companion-in-arms Kim Jong Suk gave birth to a child, who was registered as Yuri Irsenovich Kim, but destined to become world famous as his father’s successor and the founder of North Korea’s nuclear program under a different name: Kim Jong Il.

In summer 1942, Korean partisans who had taken refuge on the other side of the Soviet border were united by the Soviet military into the 88th Special Rifle Brigade, which included one Korean and two Chinese battalions.

Chinese partisan Zhou Baozhong, who was put in charge of the international brigade, knew Kim Il Sung from the guerrilla war. It was on his recommendation that Kim was appointed commander of the Korean battalion with the rank of captain of the Workers’ and Peasants’ Red Army.

According to the Russian supervisor of the Korean soldiers, “Red Army Captain Kim was a good guy—friendly, open, and cheerful,” says Vladimir Tolstikov, a former official of the Soviet Information Bureau in Pyongyang, who spoke face-to-face with many of the key participants in the fateful events for Korea, among them Kim Il Sung (link in Russian).

The 88th Brigade did not take part in the war with Japan, and was completely disbanded after Tokyo surrendered. The entire war Kim Il Sung spent far from the frontline in the remote Russian forests of Khabarovsk Territory. 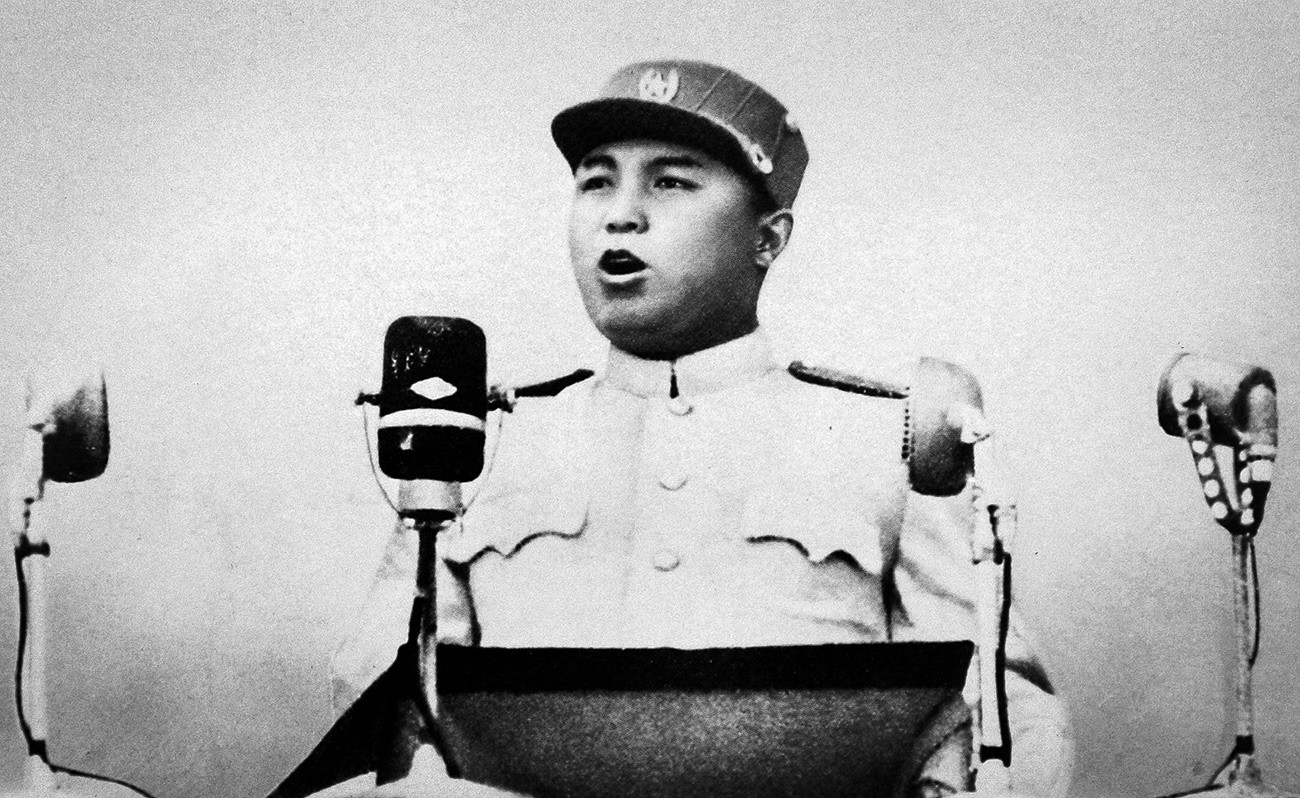 Kim Il-sung, founder of North Korea, speaks at a mass rally in Pyongyang in 1953.

“According to his memoirs, Kim Il Sung saw his future quite clearly: military service, academy, command of a regiment or division. Who knows, if history had taken a slightly different turn, it is very possible that an elderly Soviet colonel or even major-general by the name of Kim Il Sung would have retired to Moscow, and his son Yuri would have worked at some scientific research institute,” writes Lankov.

But his Soviet commanders had other plans for the Korean partisan. He was tasked with ensuring communication between the Soviet military and local residents in Pyongyang. “Pyongyang was the largest of the cities occupied by Soviet troops, and the most senior Korean officer in the 88th Brigade was Kim Il Sung, so it is no surprise that he was appointed assistant commandant of the future North Korean capital,” writes Lankov. 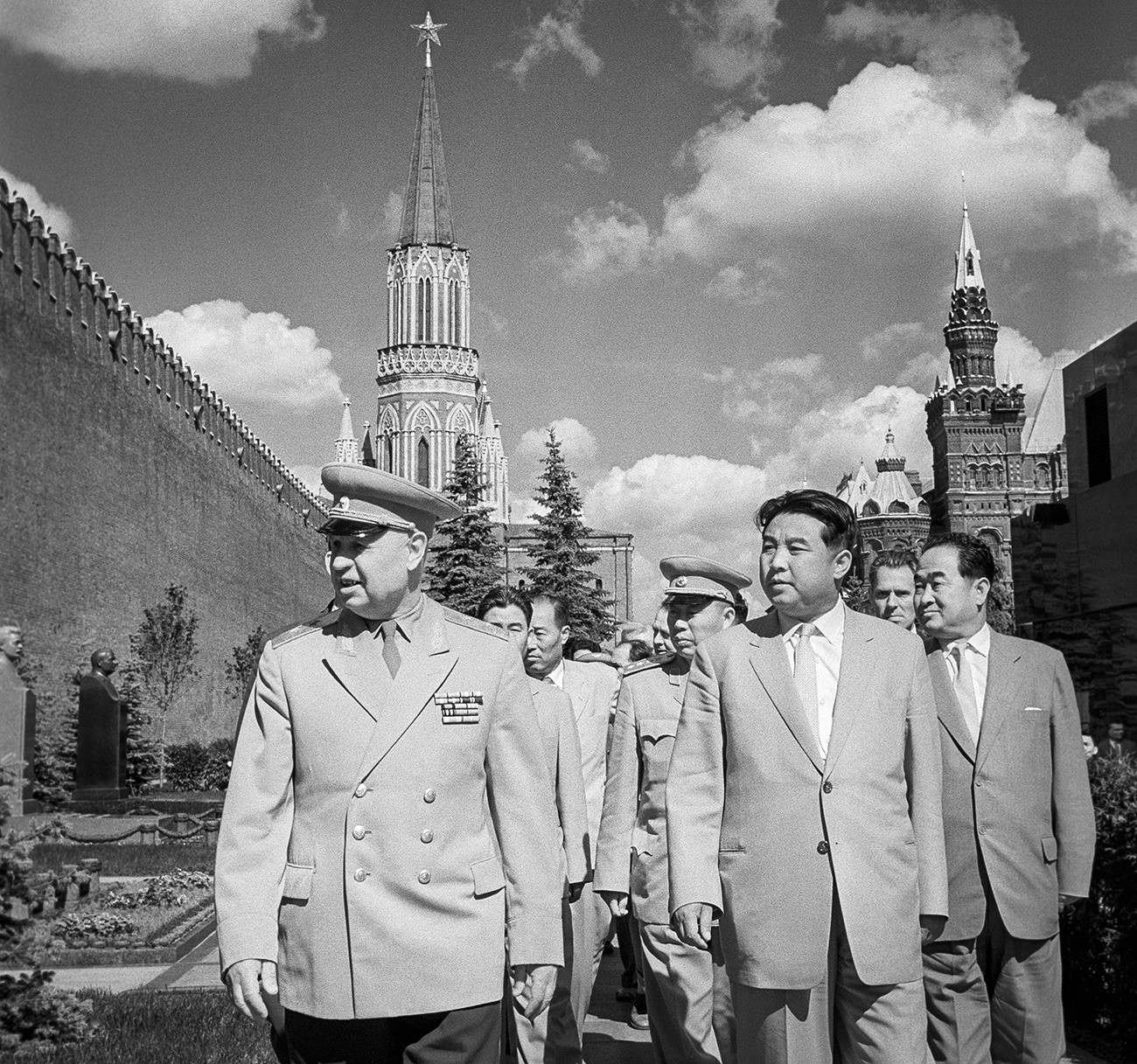 On October 14, 1945, at the Pyongyang Municipal Stadium, Soviet General Ivan Chistyakov presented the “national hero” and “famous partisan leader” Kim Il Sung to a rapturous Korean crowd, followed by a speech by Kim himself in support of the Soviet liberators. The metamorphosis of this ordinary Soviet army captain into the Great Leader Comrade Kim Il Sung can be traced to this moment.

Subsequent years would see power in the newborn North Korea become fully concentrated in his dictatorial hands, making the country the most diplomatically isolated place on Earth.

“We often rubbed shoulders at official events,” Tolstikov recalls his meetings with Kim Il Sung, “His Russian wasn’t great, but he could speak it all the same. I remember two aphorisms he was fond of repeating: ‘The people are sacred’ and ‘If the sky collapses, we’ll manage.’” It seems that North Korea’s rulers to this day have blind faith in the wisdom of the country’s founder, although the people are perhaps more sacrificial than sacred.