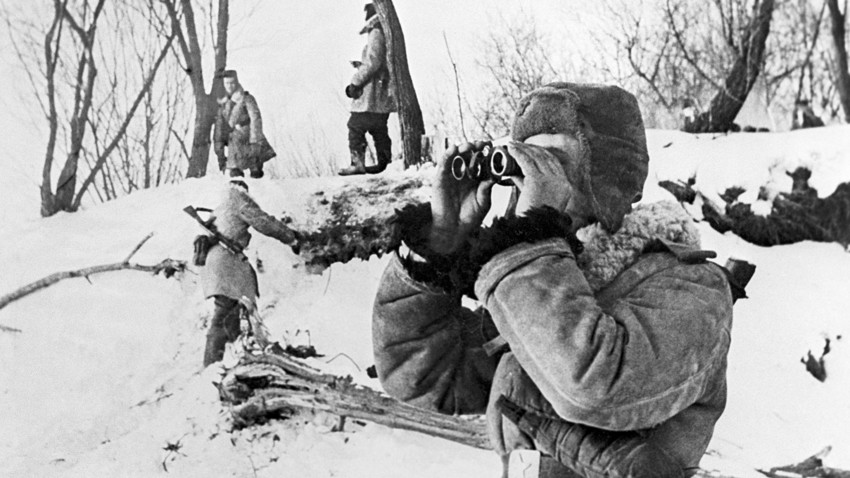 TASS
Exactly 50 years ago, a border conflict over a tiny island in the Far East could have triggered a full-scale war. What prevented this from happening?

It started early on the morning of March 2, 1969: 300 Chinese troops, who had walked the ice on the frozen Ussuri River the day before, attacked 55 Soviet border guards on Damansky Island. “They shot most of our personnel at point-blank range,” recalls Yuri Babansky, retired Lieutenant General and Hero of the Soviet Union, who survived that day, unlike many border guards, caught off guard.

Help arrived from a neighboring outpost: lieutenant Vitaly Bubenin, using armored troop-carriers, outflanked the Chinese in a surprise attack, and forced them to retreat from the island. But the fight wasn’t over.

A massacre in the middle of nowhere 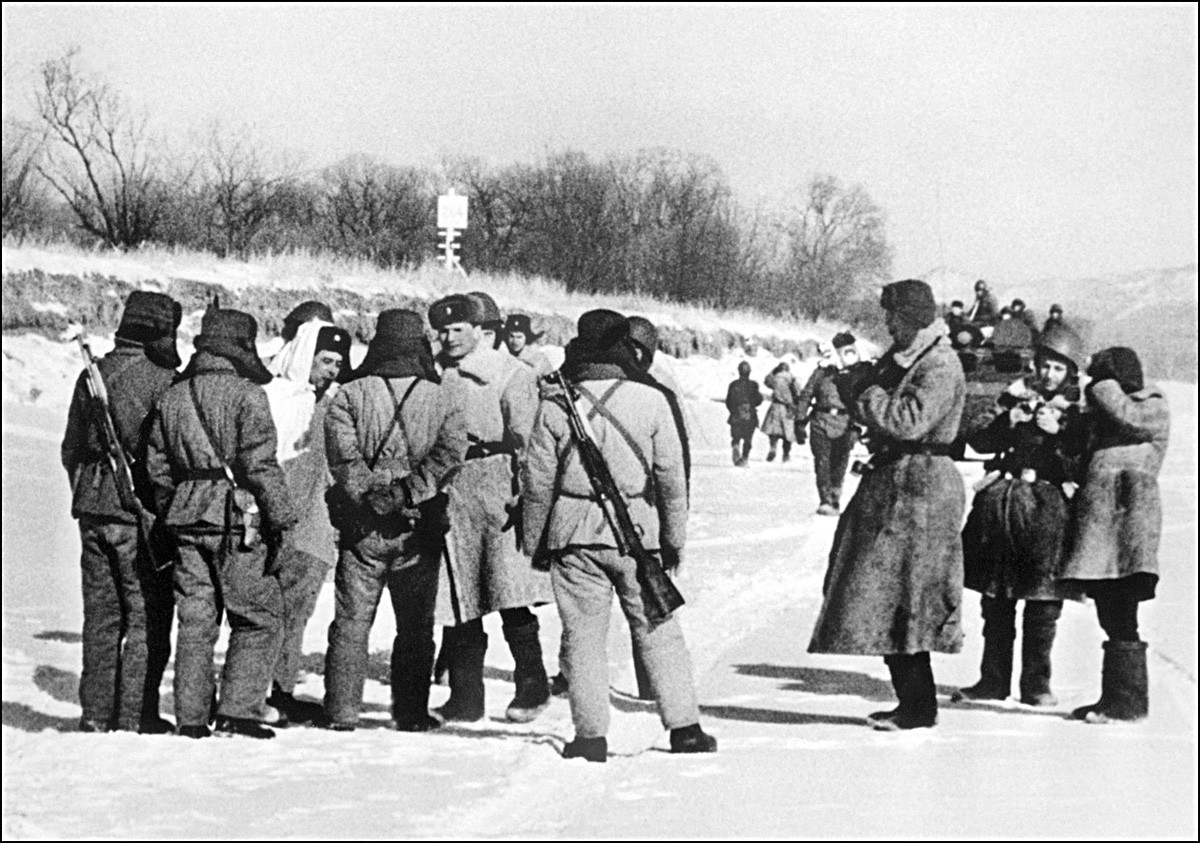 Chinese troops confronting the Soviets on Damansky (Zhenbao), several weeks before the clash of March 2, 1969.

Damansky Island was a tiny (0,74 sq. kilometers) uninhabited piece of land in the Ussuri River serving as a border between the USSR and China. Situated closer to the Chinese bank, the island became the subject of a border dispute in the 1960s: according to international law, the border should have been lying through the center of Ussuri’s main fairwater, but Moscow stuck to the agreement of 1860, which positioned the border on the Chinese bank.

Weeks before the direct clash, the Chinese started to provoke the Soviet border guards, demanding the island for China. “Throughout 1968-1969, they used to enter the ice near our island with bats, axes, sometimes with guns… we fought them but only hand to hand. Until March, 2,” says Babansky. 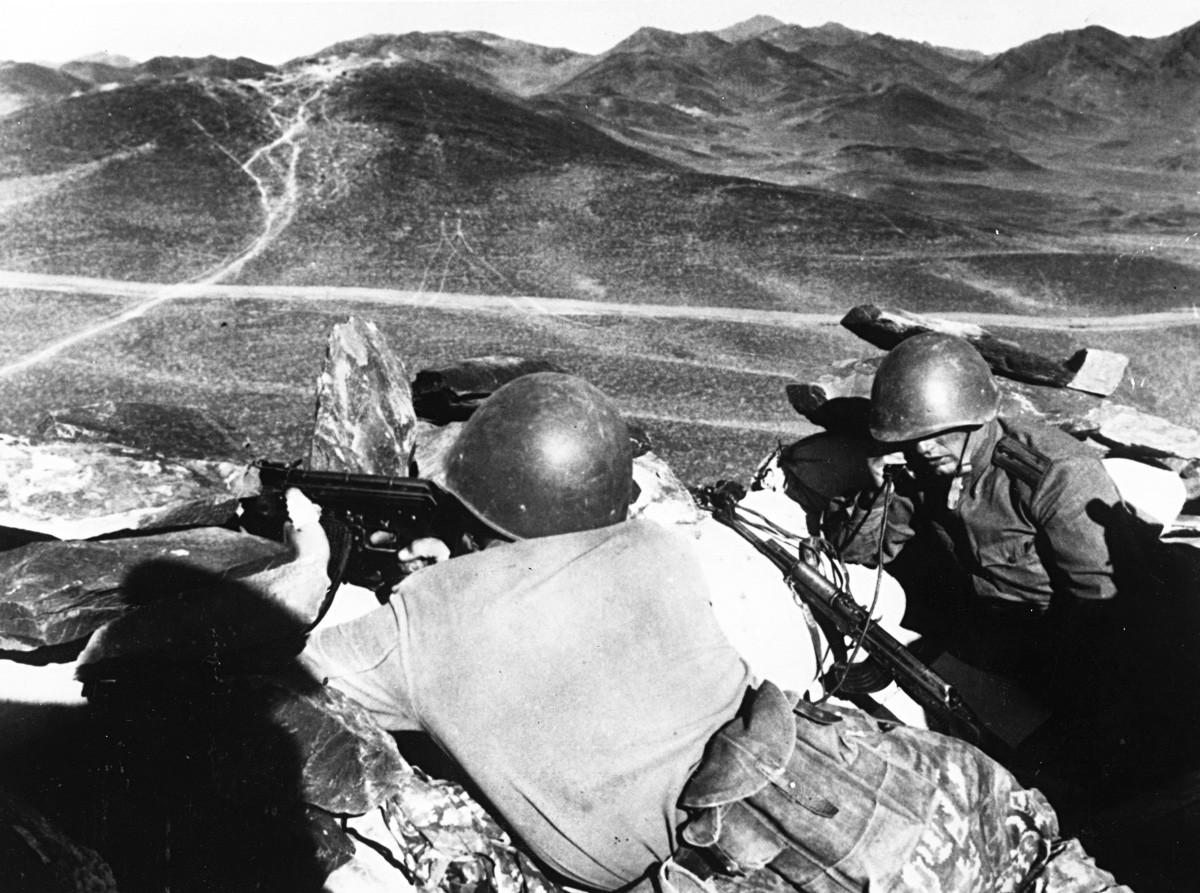 Soviet soldiers ready for action near the Kamennaya Mountain on the Sino-Soviet border, 1969

Two weeks later, Damansky (or, Zhenbao, as the Chinese referred to it) turned into a battlefield once again. On March 15, a whole infantry division attacked the island, forcing the Soviets to retreat following hours of severe fighting. Enraged Russians returned heavy rocket launcher fire from the opposite bank and wiped out the enemy. This stopped the fighting that killed 58 Soviet and up to several hundred Chinese troops. 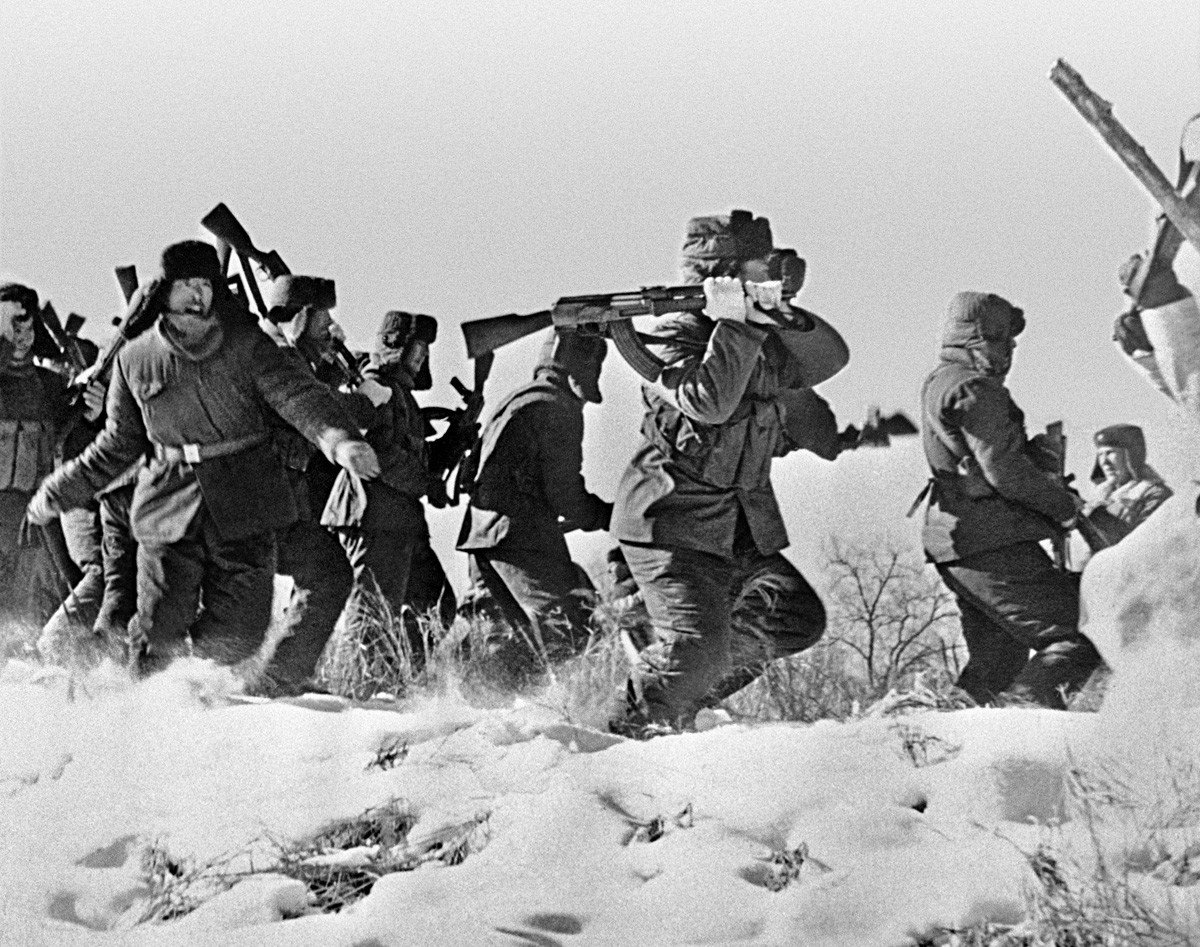 In the 1960s, both the USSR and Mao Zedong’s China claimed to champion socialism and oppose the capitalist West – how did their relations degrade to a military clash?

Just a decade before, Mao Zedong had been a friend to  Moscow. After all, Joseph Stalin supported the Communist Party of China after they won the civil war, taking most of China (except for Taiwan) under their control. Visiting Moscow in 1949, Mao called for “ten thousand years of friendship and teamwork between China and the USSR!”, and later, in 1950, the two countries signed a treaty of friendship, alliance and mutual assistance. Against the West of course.

In 1950, the People’s Republic of China (the PRC) sent a one-million army of “volunteers” to fight in the Korean War, where both Moscow and Beijing supported the North. The USSR, at the same time, helped poor, agricultural and overpopulated China to build its heavy industry: thousands of Soviet specialists participated in creating a solid infrastructure. But the alliance of two red giants didn’t last long.

After Joseph Stalin’s death in 1953, the relationship between the powers had started to worsen: Mao felt ambitious enough to pursue his own policy, as he despised Nikita Khrushchev's course of “peaceful coexistence” between the socialist bloc and the West. Far more radical than Khrushchev, Mao acted aggressively, calling the U.S. “a paper tiger” and hinting that China is not afraid of a nuclear war.

“Mao Zedong tried to use Stalin’s death and fluctuations in Soviet foreign policy to make China the new leader of the socialist bloc,” explains historian Alexei Bogaturov. Moscow didn’t enjoy it, so the Sino-Soviet friendship went down the drain. By 1960, all Soviet specialists left the PRC, as ruling parties in both countries proceeded to criticize each other harshly.

That's how Sino-Soviet relations developed, worsened and improved again: the peak was reached in 1951, while the PRC was full of Soviet specialists and two countries worked as allies. Then, after Stalin's death in 1953, things worsened and hit rock bottom in 1969, slowly improving only in the 1980s.

Things took a turn for the worse: military tensions between former allies erupted as Beijing stated it didn’t recognize the 19th century borders between the USSR and the PRC. Worried, the USSR deployed troops in Asia, forming a 250,000-300,000 contingent on its borders with China by 1967.

“We provided the military force in the east with the most effective weaponry and sent arms and equipment there first and foremost,” said Andrian Danilevich, the USSR’s former Deputy Chief of Staff. “The government understood that politicians and military leaders in the West are more reasonable than in the PRC.” The incident on Damansky proved this.

By that time, China already possessed nuclear weapons, so a conflict between the two socialist states could go nuclear in no time. Surprisingly enough, even after the conflict lasted for a couple of months (without direct clashes, confined only to shooting  all over the island), the parties managed to find peace. On Sept. 11, 1969, the Soviet Premier Alexei Kosygin visited Beijing; he and his counterpart Zhou Enlai reached an agreement: the shooting stops and the two countries start negotiations on redrawing the border . 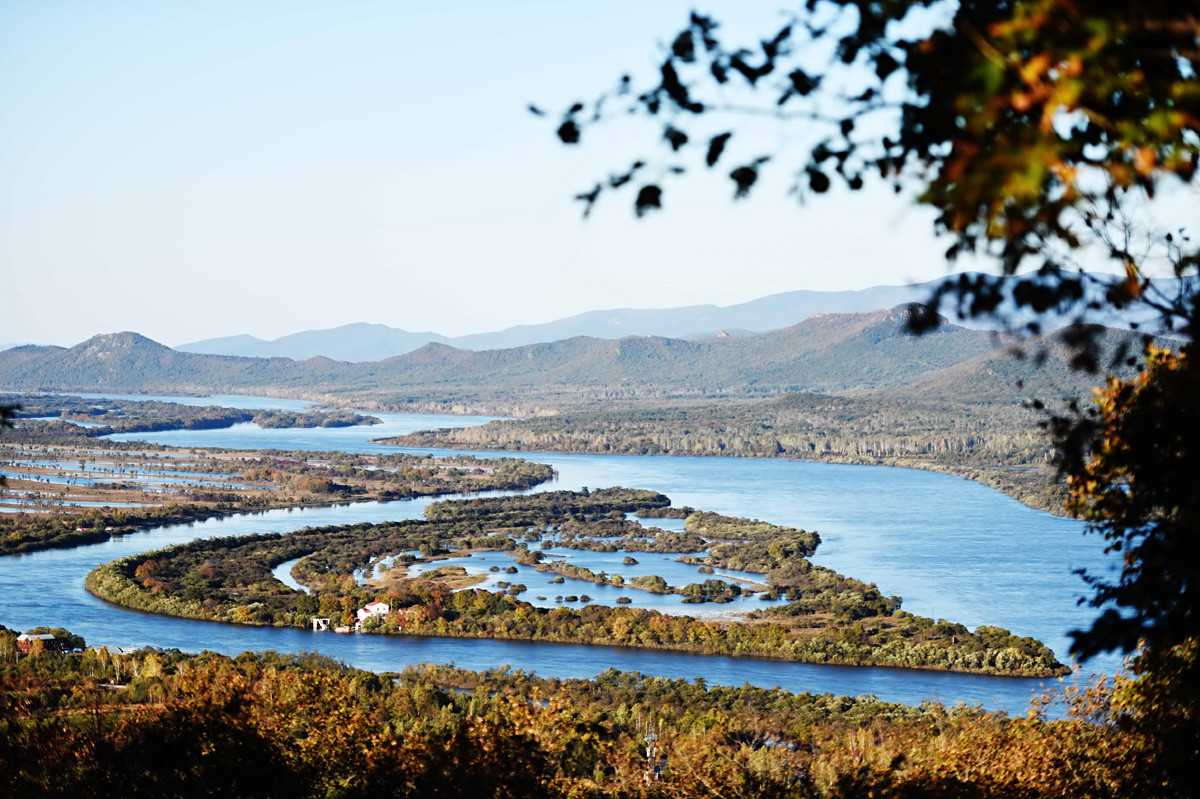 Until the late 1980s, China and the USSR remained at odds. Mao even turned to Washington to seek an alliance with “the capitalist enemy” – and succeeded. In 1972, President Richard Nixon paid a visit to Beijing, followed by the  two countries declaring a normalization of relations, and de-facto forming an anti-Soviet bloc in East Asia.

The Soviet press bashed the Chinese “traitors”, but, generally speaking, there was nothing Moscow could do with its discontent: it had other troubles on the international arena, namely, missile crises in Western Europe and the war in Afghanistan, so the situation on the Chinese border remained pretty status quo.

Only in 1989 did Mikhail Gorbachev and Deng Xiaoping sign a treaty on the demilitarization of the border, and declared bilateral relations normalized. A few years later the USSR ceased to exist, and in 1991 Russia officially ceded Damansky (Zhenbao) Island to the PRC.