Why were the Bolsheviks so hellbent on burning the dead?

History
Georgy Manaev
A. Cheprunov/Sputnik, Russia Beyond
To burn or to bury? The tale of Kazimir Malevich advocating the incineration of bodies, Bolsheviks hating on graveyards, and a crematory installed in a church.

Late 1920, winter in St. Petersburg. Poet Nikolay Gumilev, artist Yuri Annenkov, and Bolshevik official Boris Kaplun are in the company of an unnamed woman – they’re drinking wine in Kaplun’s office and “talking about Whitman, Poe, and Kipling,” recalled Annenkov. The trio of men often frequented this office where Kaplun supplied his pals with ether, a recreational drug loved by the trio.

Annenkov went on: “Kaplun looked at his watch, picked up the receiver and shouted ‘Bring the car!’ It was a fine Mercedes Benz taken from some capitalist’s garage. Kaplun explained that in half an hour they’ll be testing the new crematory and a corpse from the morgue will be chosen to be burned – he invited us to go with him. 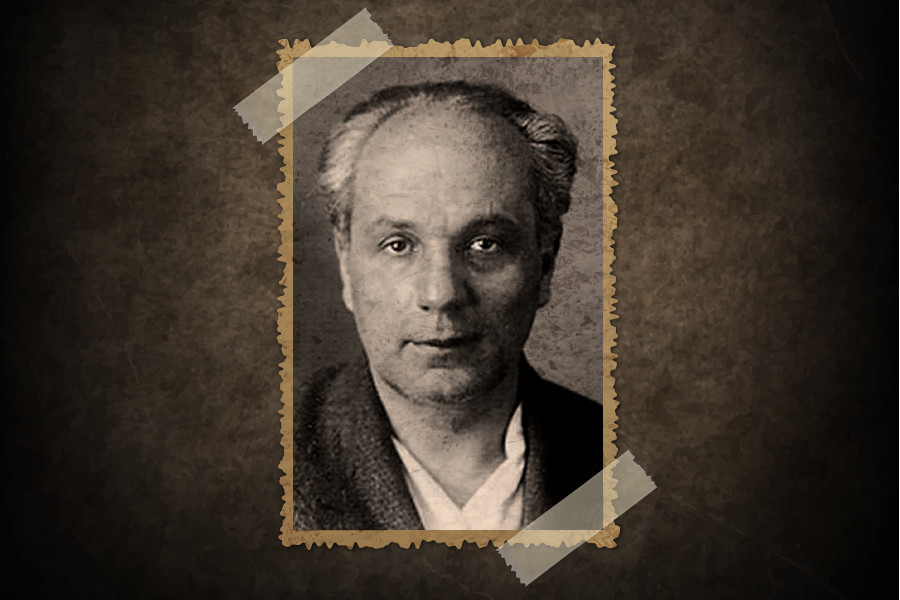 “In a huge hangar, corpses covered with rags were lying on the floor in endless rows. The director of the crematory was waiting for us. ‘May the lady make the choice,’ Kaplun said, addressing the girl. She eyed us with terror and, taking a few shy steps between the bodies, pointed at one of them. ‘Ivan Sedyakin, beggar’ was written in pencil on a piece of dirty cardboard on the corpse’s chest. ‘Hence, the last one will be the first,’ Kaplun declared and turned to us with a grin: ‘A funny joke, isn’t it?’”

No Judgment Day for the cremated

The first crematory in Russia was meant for Japanese citizens. It was built before 1917 in the Vladivostok Region – in Japanese culture cremation is commonplace, unlike in Russia where to this day the Church doesn’t approve of burning the dead. In 1909 Russia’s Most Holy Governing Synod officially condemned cremation.

When the Bolsheviks came to power one of their first steps was to eliminate the Orthodox Church from the registration of births and deaths. Before, all births were registered in churches and funerals only held in the presence of a priest (except for those who committed suicide, they were not given a church service sendoff).

Now, as religion was abolished the Church was divorced from funerals. That’s why the Bolsheviks strongly advocated cremation: followers of the Orthodox Church believe cremated people can’t resurrect after Judgment Day, so cremation was perceived as anti-religious.

Also, after the Revolution, during the Civil there were many dead bodies in the streets of St. Petersburg and Moscow. “In Lefortovo by the wolves are eating the corpses of people who died from typhus. There’s a line to the graveyard, people are waiting for days in the hospitals to get treatment, some are dying on the spot, some leave. There’s no hot water in hospitals, people are being discharged without a bath or even disinfection – there are no supplies, and doctors are dying like flies,” Praskovya Melgunova wrote on March 1, 1919. So the crematories were essential: Moscow and St. Petersburg couldn’t cope with so many dead.

In 1919 Vladimir Lenin signed a decree that encouraged cremation but at that there were still no crematories.

One shelf, thousands of graveyards

“By burning a dead man we get one gram of soot, and thousands of graveyards can fit on just one shelf,” Kazimir Malevich wrote in 1919. The early Bolsheviks wanted to get rid of graveyards in their efforts to erase the old world. In 1920 Boris Kaplun spearheaded a commission to organize the building of a crematory. Over 200 people put their name in the hat to design the architectural project – the interest was immense. Annenkov, as Kaplun’s friend, created an emblem for the crematory: a raven sitting on a smoking skull (unfortunately, the drawing is now lost.) “Every dead citizen has the right to be cremated,” said the advertisement for the new crematory. 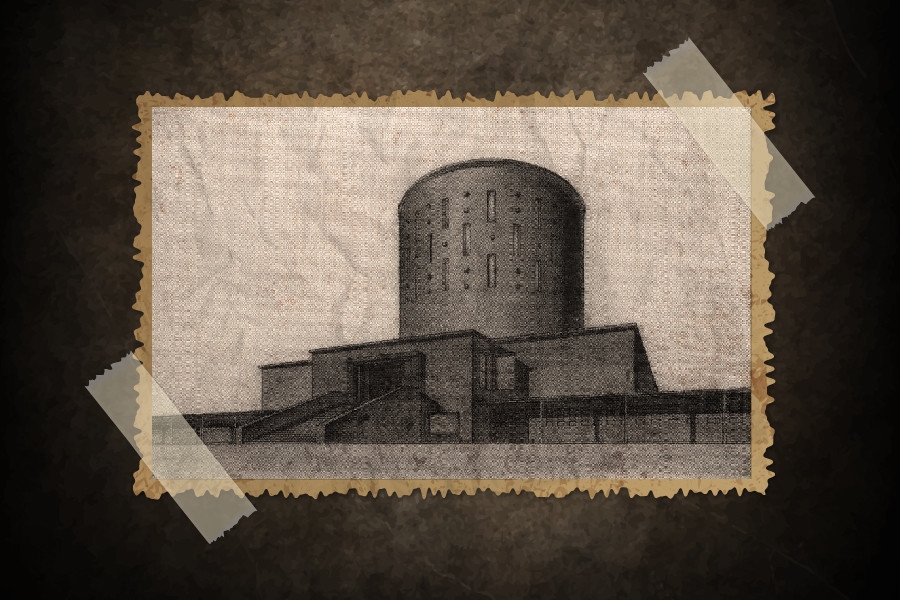 The winning project for the crematory in St. Petersburg

The crematory was earmarked for Alexander Nevsky Lavra, St. Petersburg’s main convent. By no coincidence, the choice of location upset the Orthodox Church but the Yudenich onslaught put the brakes on the project and Kaplun was forced to hastily install a crematory in an old banya on Vasilyevsky Island. The first corpse was officially burned on the island on Dec. 14, 1920.

Famous Russian writer Korney Chukovsky attended one of the first cremations.  In January 1921 he wrote “Kaplun entered the crematory, which was like a theater, and guided us through the mangled halls. We laughed, there’s no piety at all, no grandeur, everything’s bare and frank. No religion, no poetry to decorate the place of incineration. Everybody’s in hats, smoking, talking about corpses like they’re talking about dogs… A young engineer shouted: ‘Lay it down!’ Undertakers in white shrouds grasped the giant metal forceps hanging from the ceiling… put the wobbling coffin on it and shoved it into the furnace. Through a window, we saw how it burned, how jolly and hospitable the flame was. They added gas and it went even better… ‘The brain burns!’ the engineer said. The workers crowded around the window. We took turns to peek in and told each other with gusto: ‘The skull has cracked!’; ‘The lungs are burning!’ while graciously letting the ladies go first.”

A church that became a crematory

The first St. Petersburg crematory operated for just two months, burning over 400 bodies in the process, mainly those of beggars, unidentified people, and prisoners of war. After this it was closed because it was too expensive to run. But the government continued to promote cremation. In 1925 a Moscow magazine published an article with the title: “Burning of human corpses wins more and more supporters.” 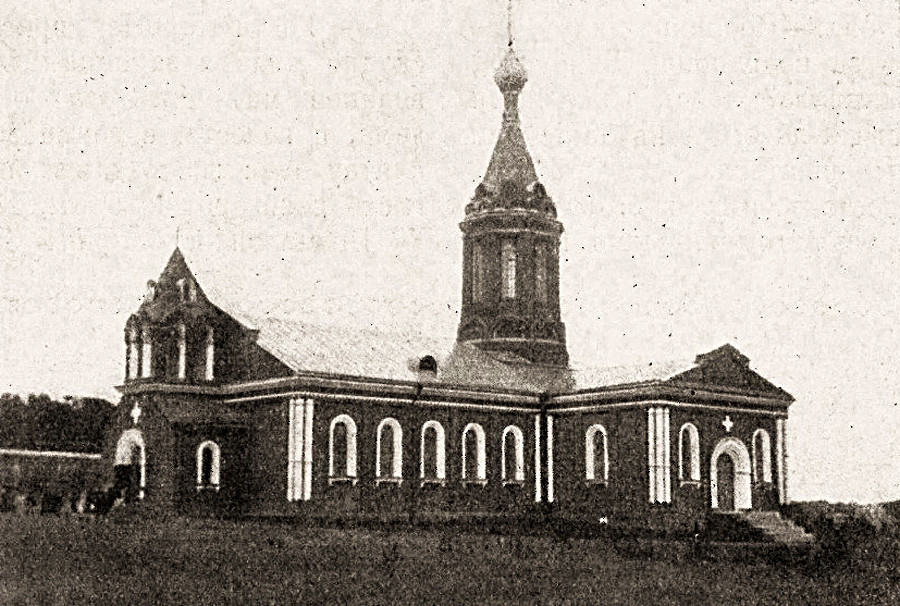 The church of St. Seraphim of Sarov on Donskoe graveyard before reconstruction

What the Bolsheviks couldn’t pull off in St. Petersburg, they did in Moscow: in 1927 the Donskoy crematory was opened in the unfinished St. Seraphim of Sarov Church located right on Donskoe graveyard – in Moscow this place was highly revered among believers. 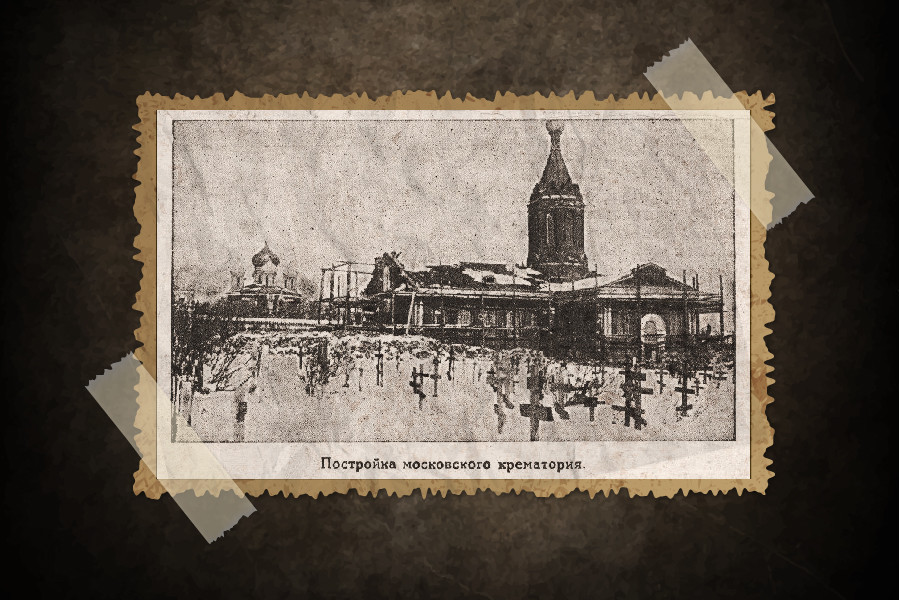 Donskoy crematory during the construction. The church's bell-tower is still intact.

The church’s dome was replaced with a 20-meter tall chimney. In the basement, there was a morgue, showers, and offices. The crematory used an 1898 pipe organ taken from the demolished Lutheran church in Moscow’s German quarter. Rather grimly the furnaces for Donskoy crematory were installed by Topf and Sons, an engineering company that later built furnaces for the Buchenwald, Dachau, Mauthausen-Gusen, Mogilev ghetto, and Gross-Rosen Nazi concentration camps. The sorrowful fates of many German and Russian people intertwined in this building.

The first incineration was performed on Dec. 29, 1926. The cremation lasted 1.5 hours and was highly effective. In October 1927 the crematory officially opened. It earned the nickname “Rostrum of Atheism” and operated until 1973. In 1934 the body of its architect, Dmitry Osipov, was burned and his ashes laid to rest inside the building. 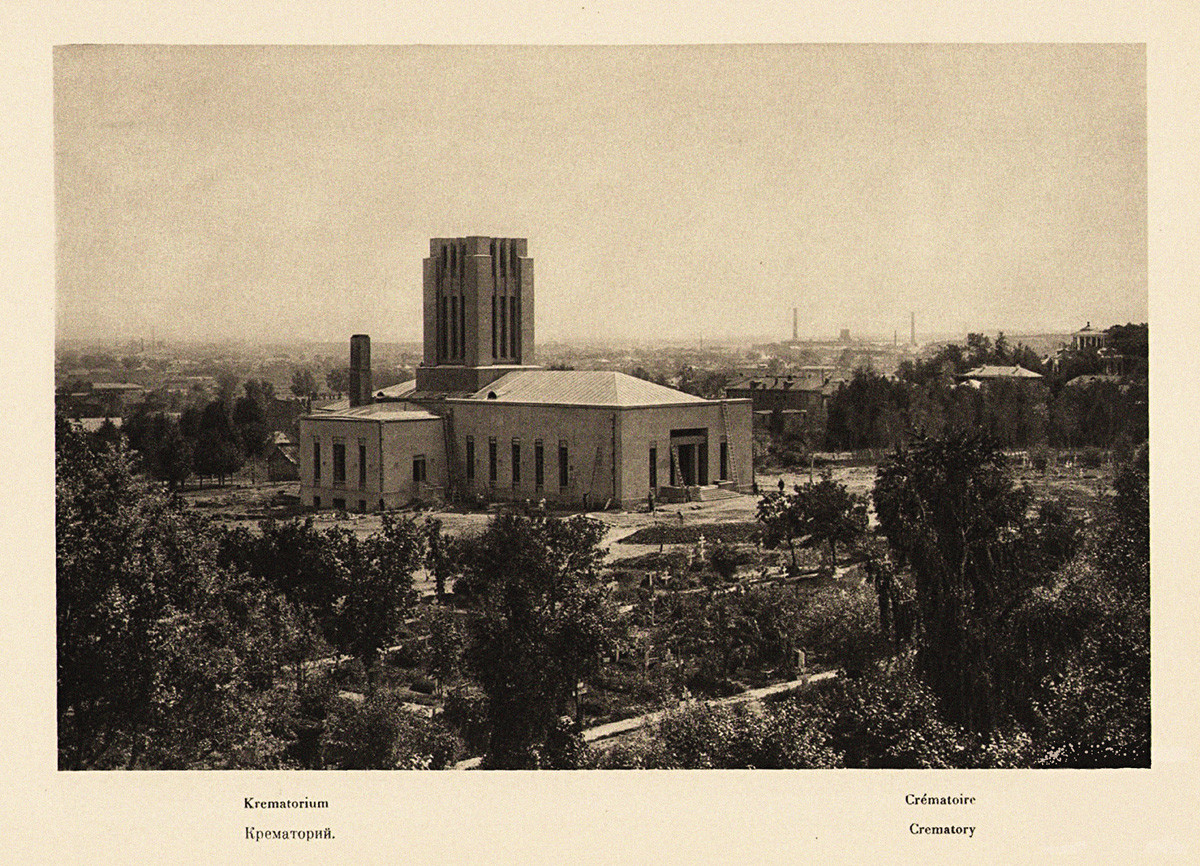 In 1973 the Nikolo-Arkhangelsky crematory opened in Moscow (the largest in Europe), and Donskoy was officially closed. For ten years until 1984 it cremated only the bodies of the highest Communist Party officials, and in 1992 the building was returned to the church – the chimney was demolished and Orthodox services resumed. 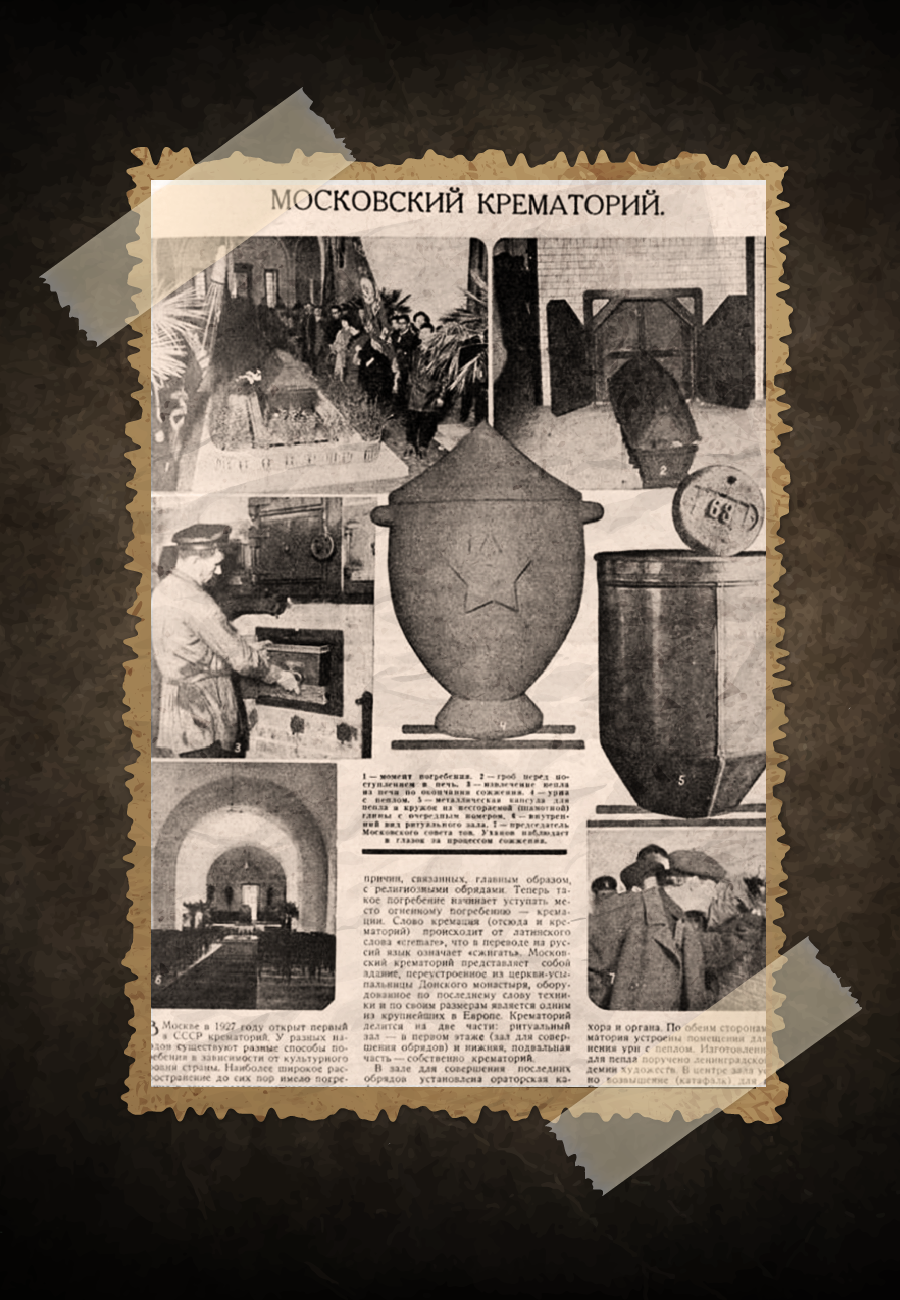 A newspaper advertisement for the Donskoy crematory

A temporary wall now separates the church from the Soviet period extensions that still house over 7,000 funeral urns filled with ashes. The existence of the columbarium stands in the way of returning the church to the way it looked before the Revolution. Many neglected urns remain but most Muscovites whose relatives are interred there are firmly against moving the ashes to a new columbarium. Many urns and the niches in which they rest are in dire condition, and reinterment could destroy them altogether. “I’m angered with this situation,” famous Russian actor Alexander Shirvindt said in 2012. “This crematorium holds the ashes of my parents, my sister.” 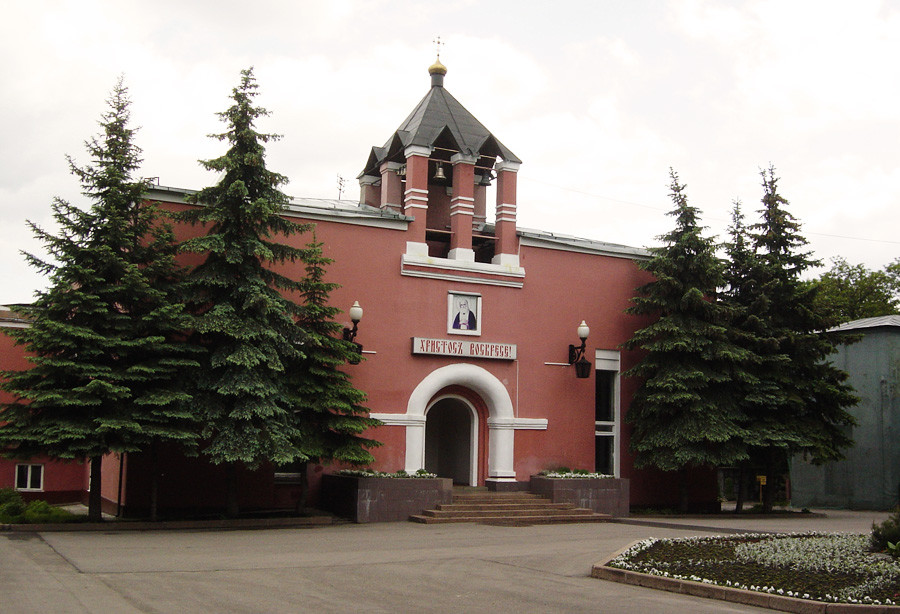 As of 2019, the situation is still on hold: weddings, funerals, and baptisms are performed in the church, while the ashes of Soviet citizens ashes collect dust close by. The Russian Orthodox Church no longer condemns cremation and allows normal burial services before the deceased are cremated.