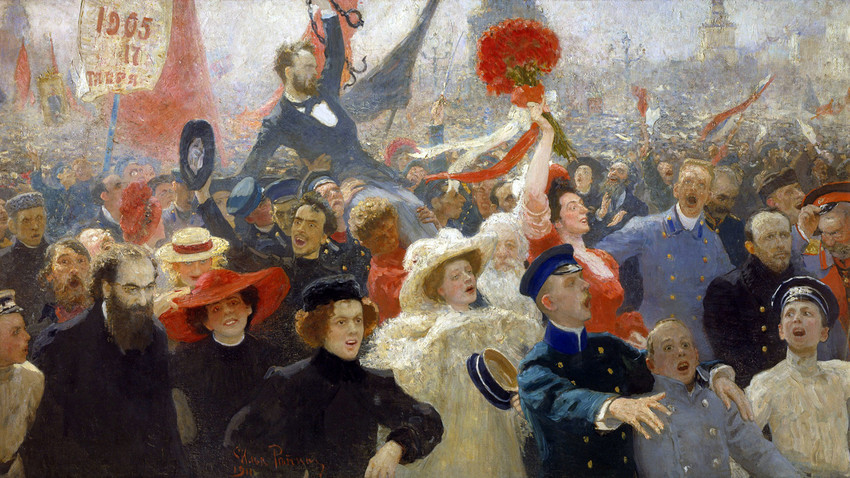 Russian Museum
Before the 1917 Revolution wiped the Russian Empire from the world’s map, there were several major uprisings that significantly shook the basis of the country and inspired terror in the hearts of its rulers. 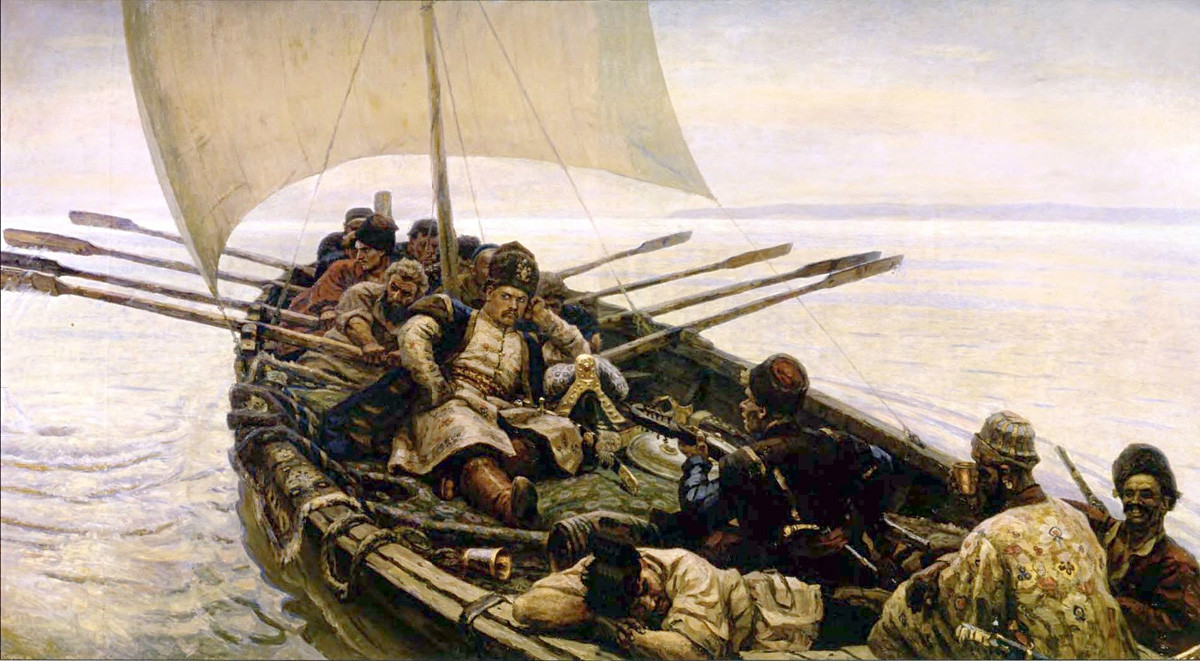 One of the largest uprisings in Russian history, Stenka Razin’s “peasant war” was caused by the consolidation of serfdom in the Russian state, as well as the country’s exhaustion from the long wars with Poland and Sweden.

A Don , Stepan (“Stenka”) Razin managed to unite under his banner thousands of and peasants outraged by having their rights trampled by the nobles, who became their main target of aggression. Every city that troops took turned into an aristocratic bloodbath.

Razin moved towards Moscow from southern Russia, taking city after city, and enlarged his army by offering freedom to each peasant who joined him.

However, at the Battle of Simbirsk in 1670, the army was defeated, and its leader fell into of government forces soon after.

Razin was quartered, and thousands of his followers were so brutally executed that witnesses were deeply shocked. 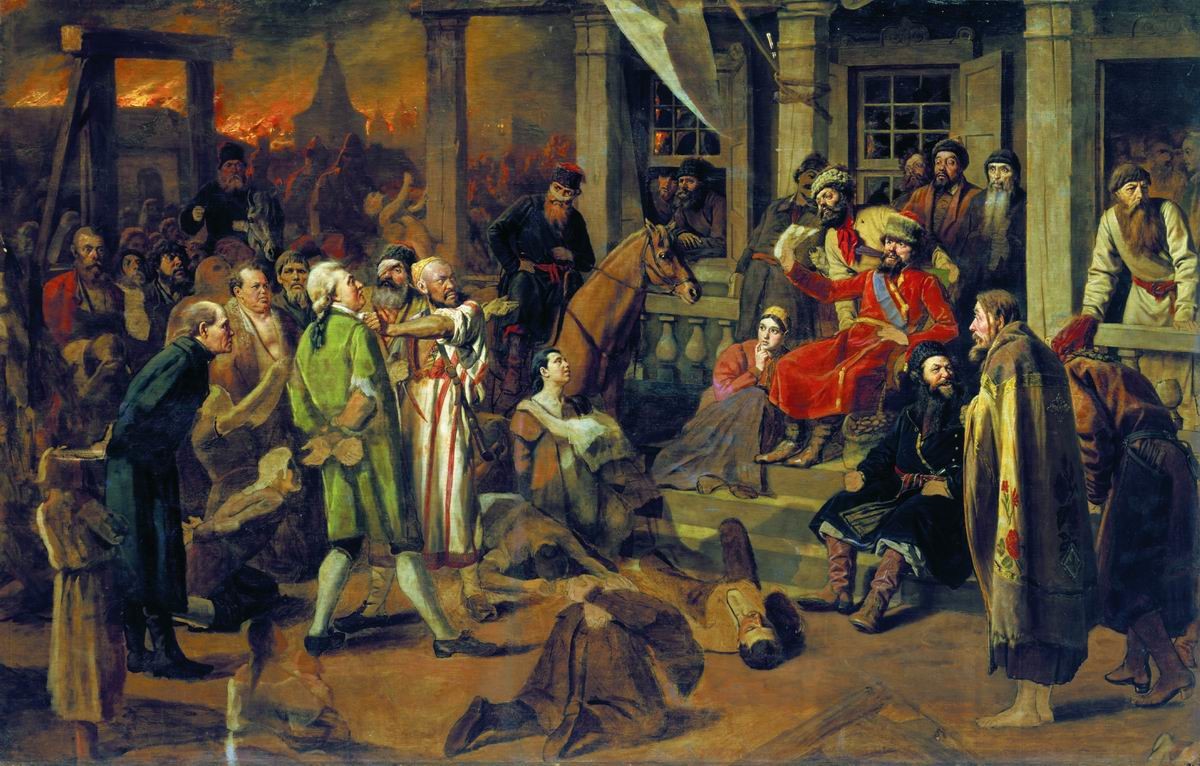 Vasily Perov. The Judgement of Pugachev. 1875.

The Peasant war led by Yemelyan Pugachev had much in common with Razin’s uprising. their a century before, Pugachev’s and peasants were much displeased that their rights and privileges were suppressed by the state and nobility.

The Yemelyan Pugachev proclaimed himself the “miraculously saved” Emperor Peter III (who in reality had been overthrown and killed by his wife Catherine the Great). The impostor gathered a huge army of almost 70,000 men, promising them freedom, welfare prosperity if he took the throne.

The rebel troops took many fortresses and small towns in the southern Urals and Volga region, defeated all government forces sent against them, occupied an enormous territory, and thus inspired much terror in Russia’s ruling classes.

However, in 1775 the rebellion lost its initial impulse and was quashed. Yemelyan Pugachev and other leaders were taken to Moscow and executed there. 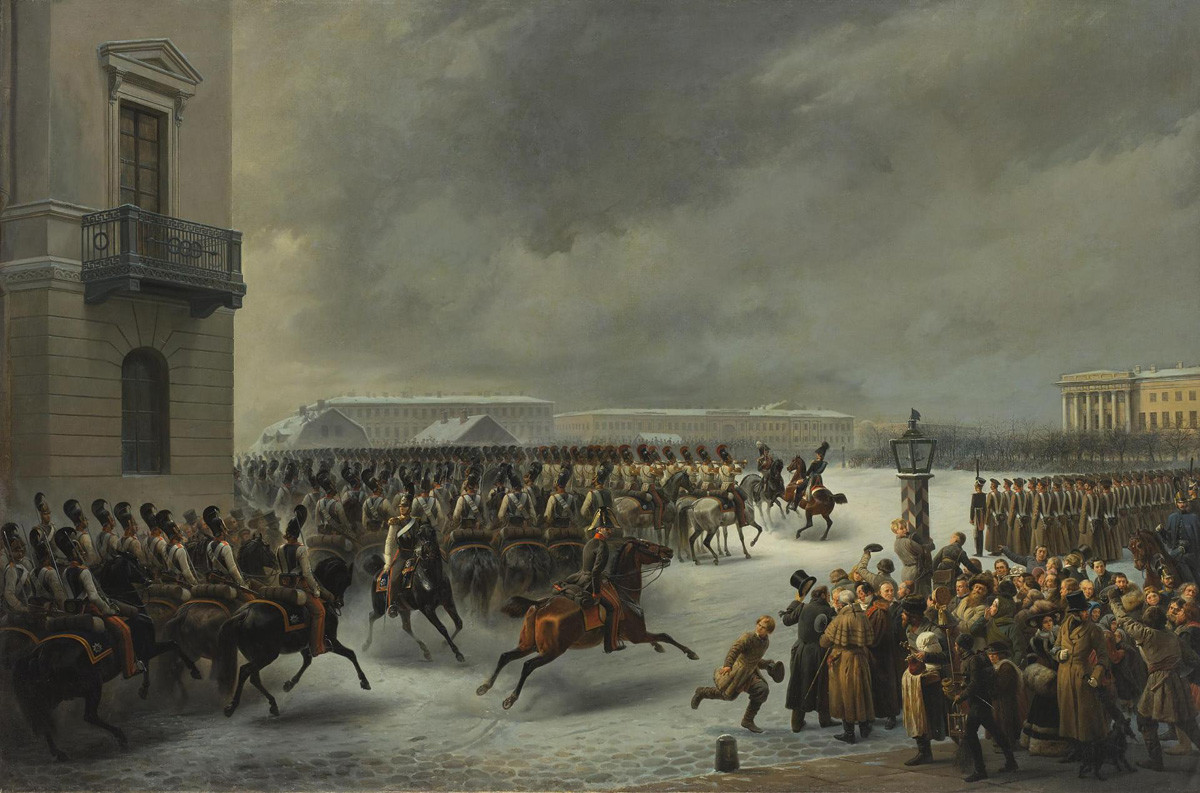 Georg Wilhelm Timm. Life Guards Horse Regiment During the Uprising of December 14, 1825 at the Senate Square.

When the Russian army entered Europe in 1813 and marched to Paris to finish off Napoleon, it got a chance to see European life very close up. Many officers were forced to admit that Russia significantly lagged behind Europe, and this situation had to be changed.

They formed several secret societies aimed at abolishing serfdom, limiting the sovereign’s power or abolishing the monarchy altogether, plus the undertaking of deep reforms in Russia.

On Dec. 14 (26), 1825, during the swearing-in ceremony of the new monarch Nicholas I in St. Petersburg, they made their move. However, as a result of their disorganization and hesitation, the Decembrists (as they later became known) failed to assassinate the emperor or co-opt government troops.

The revolt was suppressed, the leaders were executed, and other members were exiled to Siberia and the Russian Far East. 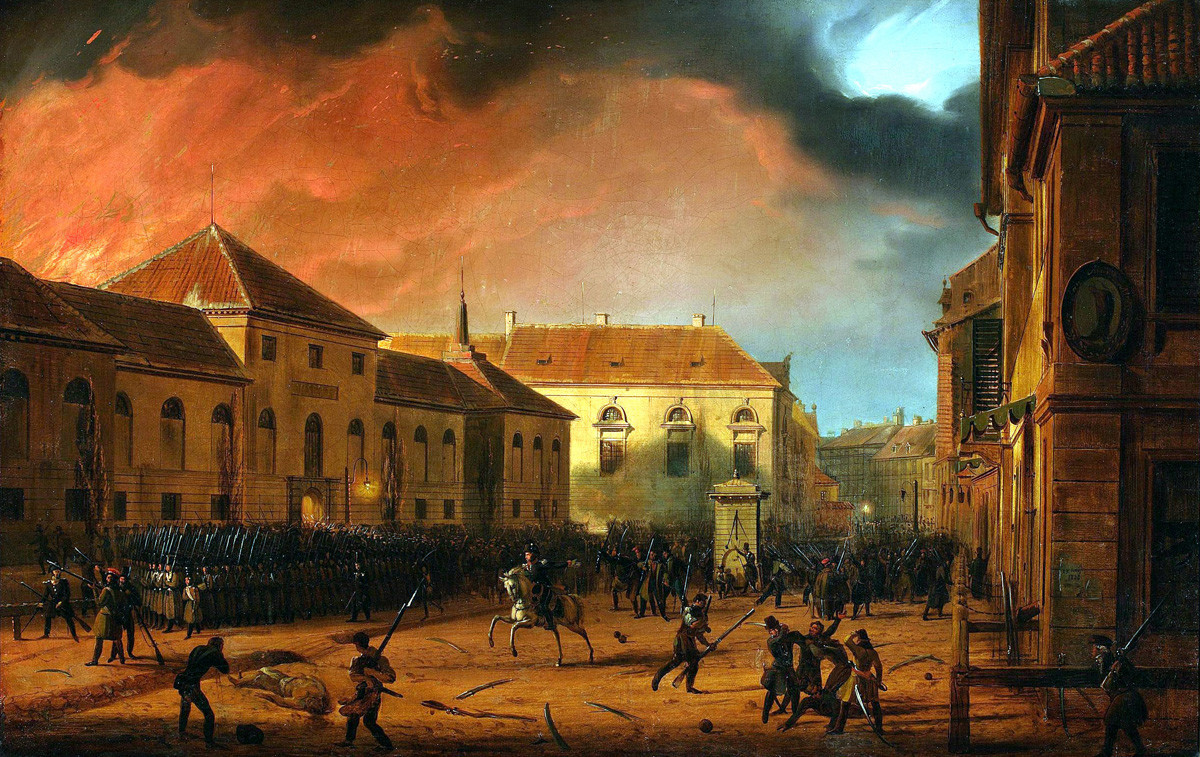 Capture of the Arsenal in Warsaw. 1831 by Marcin Zaleski

In 1795, Poland vanished from the map of Europe after being carved up by Russia, Prussia Austria. The Poles, however, did not lose hope to restore their independence, and in 1830 organized a major uprising.

The aim of the November Uprising, or the Polish-Russian war (as it is known in Poland), was to restore the country as it was before the partitions - a huge territory from the Baltic to the Black Sea.

Although the rebellion reached out across the vast territories of Poland, Ukraine and Lithuania, and the Polish army was estimated at over 150,000 men, not to mention partisan units in different regions, it was suppressed by the Russian troops.

As a result, Poland lost its special status and rights in the Russian Empire, such as its own constitution and army. The process of turning Poland into an ordinary Russian province was initiated. 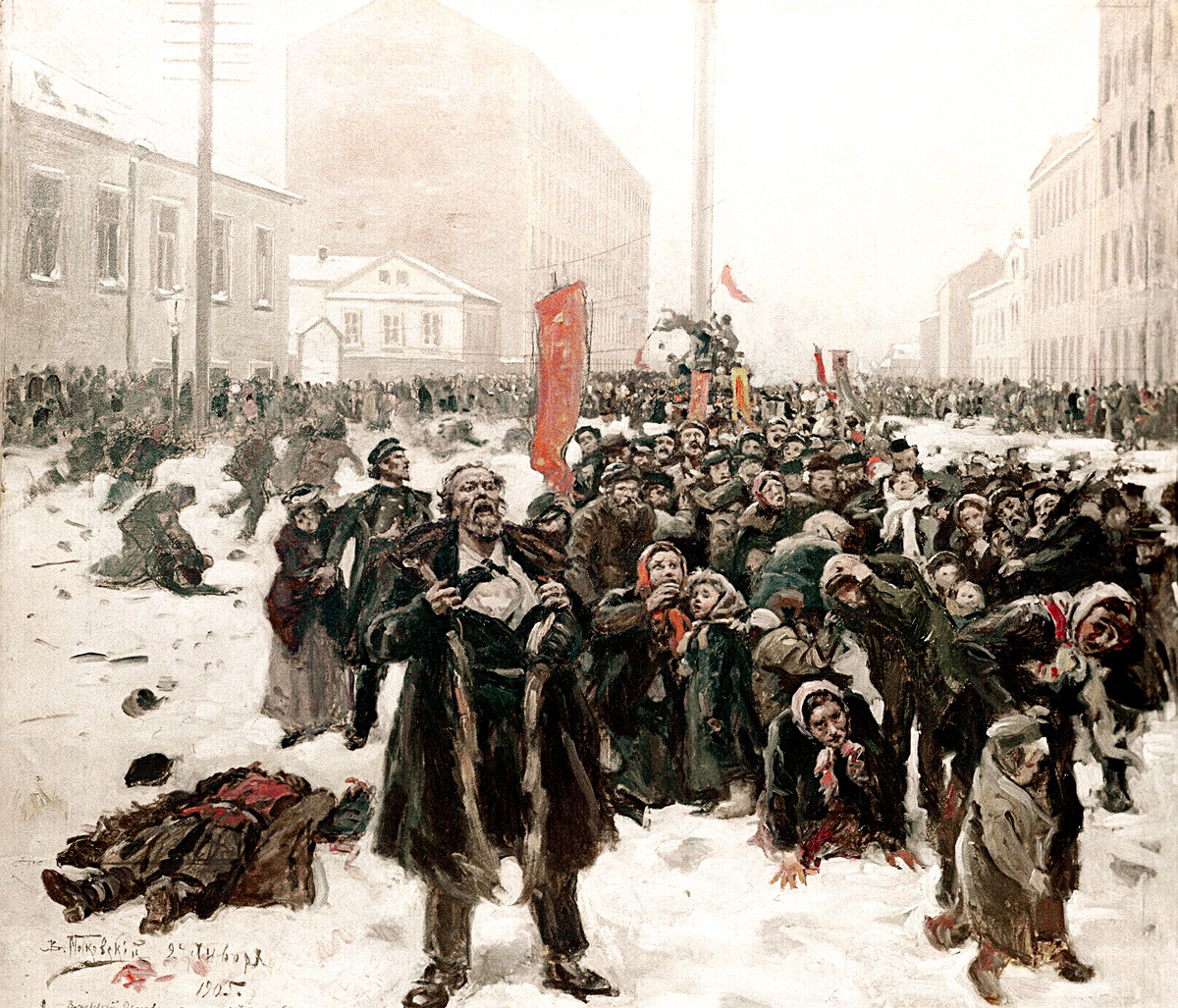 Vladimir Makovsky. The 9th of January 1905

The Russian Revolution of 1905 was essentially a general rehearsal for the one in 1917, which ended the country’s existence.

Low living standards, lack of freedom of speech, and the military disasters in the Russian-Japanese war were just a few of the reasons that led to the demonstrations and riots.

After several hundred people were killed by soldiers during a peaceful demonstration in St Petersburg on Jan. 9 (22), 1905 (the event became known as Bloody Sunday), the turmoil spread across the whole huge country.

Only when Nicholas II granted concessions by limiting sovereign power, establishing a parliament (the State Duma), and improving working conditions, the 1905 Revolution fizzled out, giving the country a short break for ten years before the next, much more terrifying revolution started.