Why Stalin's body was removed from the Mausoleum 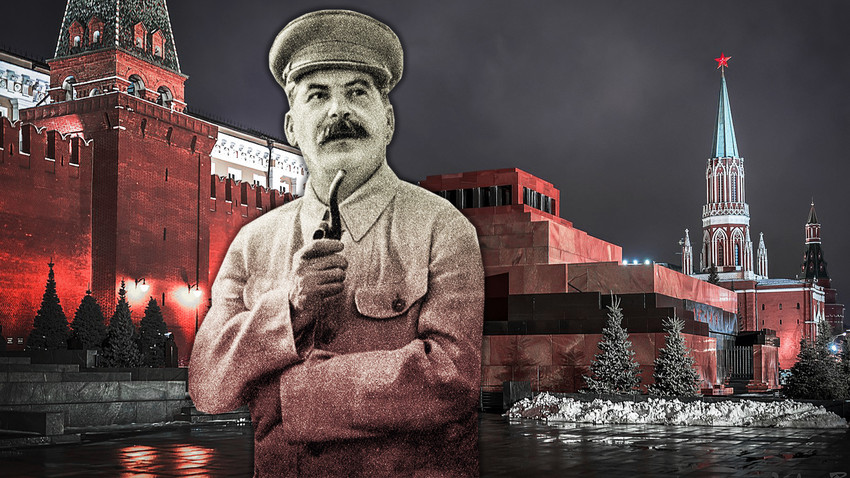 Valeriy1960 (CC BY-SA 4.0), Archive photo
For 7 years, the bodies of Iosif Stalin and Vladimir Lenin were placed in the Mausoleum together. So why was Stalin’s body removed? And why did it happen on Halloween?

Lenin’s Mausoleum is, in large part, Stalin’s creation. When Lenin died, thousands of Communist Party members flocked from all over the country to pay their last respects to the leader, who temporarily lay in the Hall of Soviets in Moscow.

The delegations kept coming and coming, meanwhile, Lenin’s body started to rot. It was then when, under direct orders from Stalin, Lenin’s body was embalmed and placed in the Mausoleum. It was done against Lenin’s wish (read more on why here), and notwithstanding the fierce protest of his widow, Nadezhda Krupskaya. First, there was a wooden Mausoleum, and later, the granite one, both designed by architect Alexey Shchusev. 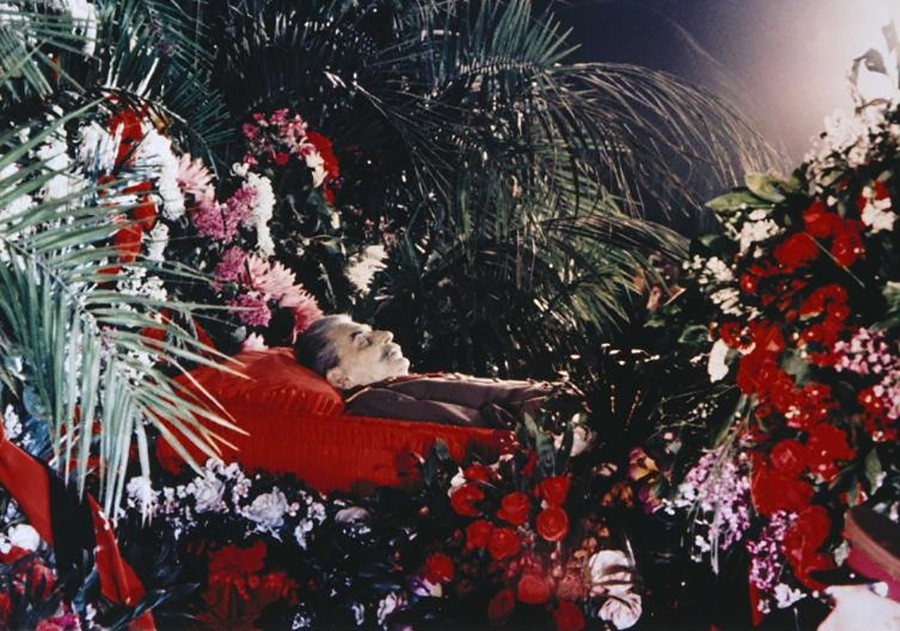 When Stalin died March 1953, his funeral turned into a pompous and grim ceremony that paralyzed Moscow and led to a stampede and the death of dozens. After the funeral, Stalin’s embalmed body was also interred in the Mausoleum. 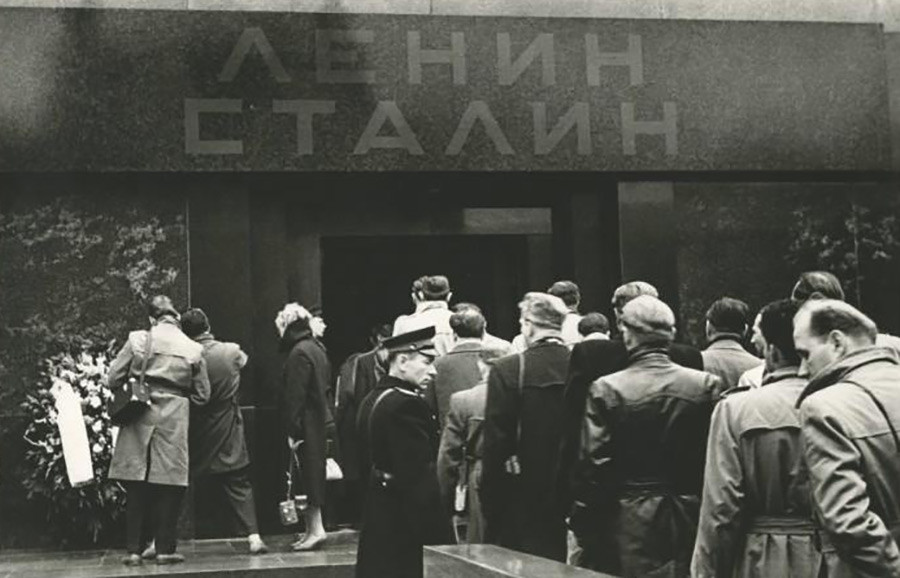 The letters “L-E-N-I-N” had been written on a 48-ton black labradorite monolith on top of the Mausoleum. So, initially, authorities hastily painted it over and “S-T-A-L-I-N” underneath “L-E-N-I-N”. But during the harsh winters, frost formed on the silhouette of the original “L-E-N-I-N” letters underneath the black paint, as if to show who’s still the boss. The “L-E-N-I-N” stone with peeling paint was eventually replaced with a new labradorite monolith, that had both surnames, in 1961. The original was ordered to be destroyed, but the commandant, Konstantin Moshkov, preserved the stone at the risk of execution (and eventually became a hero of the state for his bold “vision”).

READ MORE: How Stalin’s demise resulted in the deaths of dozens of Soviet citizens 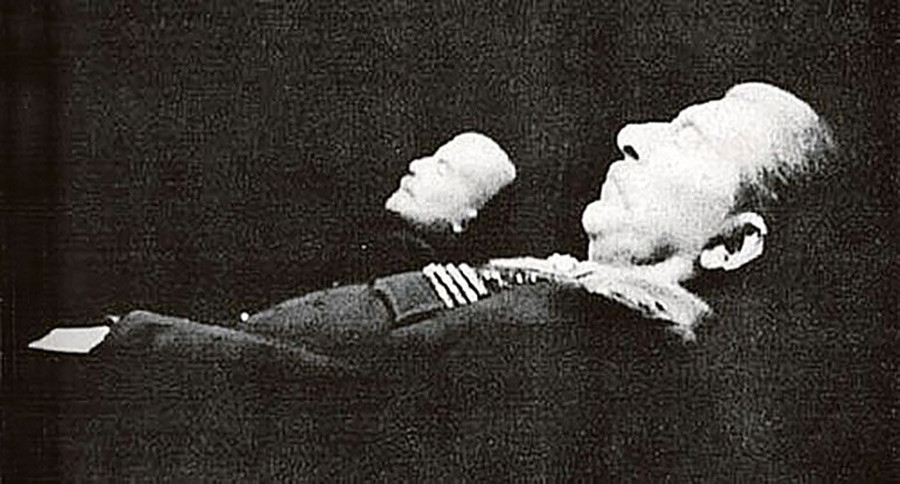 Now, there were two sarcophaguses, and the Mausoleum’s staff doubled because there were now two mummies to attend to. Stalin’s body looked much more “luxurious” than Lenin’s: Stalin was in his generalissimo uniform, decorated with golden buttons and epaulets and state orders strapped to his chest; Lenin was (and still is) in his civil black suit, without any awards or decorations. It seemed that Stalin, the disciple, did considerably better in life than his tutor Lenin. 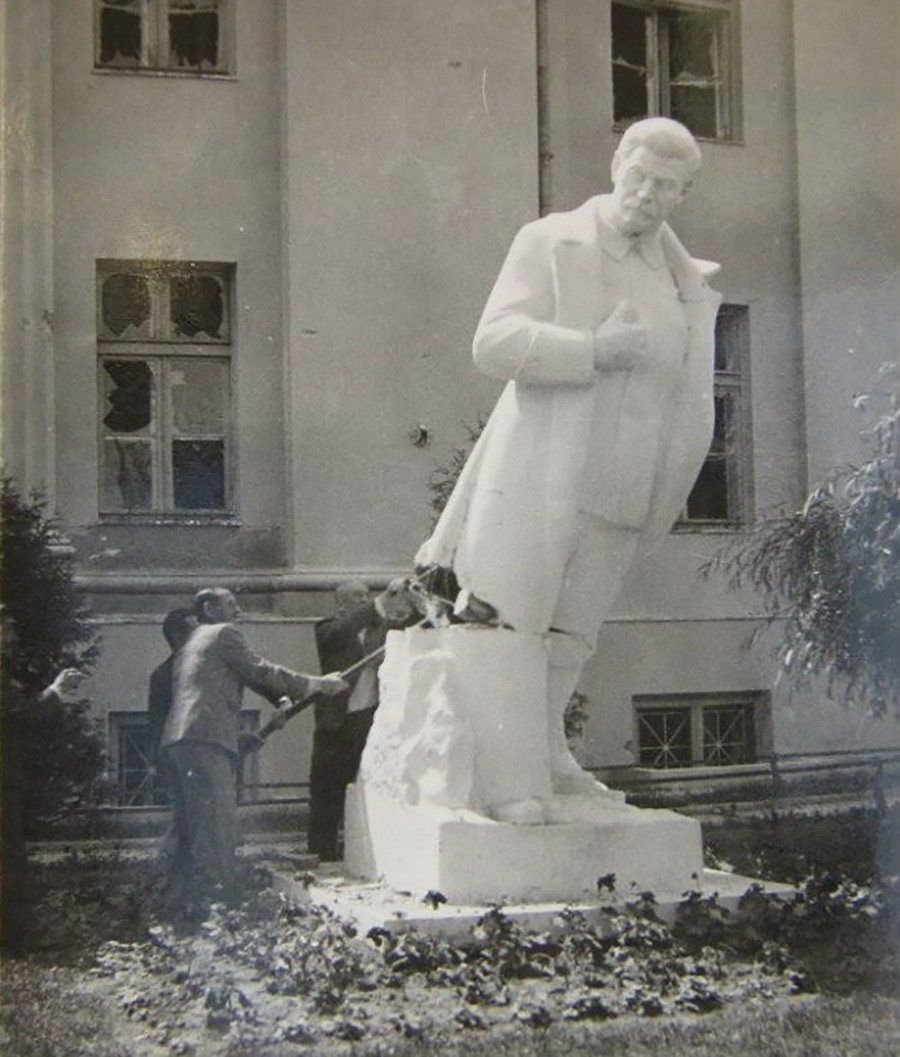 After Stalin’s death and Nikita Khrushchev’s rise to power, the Soviets wanted to part with the dreary, totalitarian past. At the 20th Congress of the Communist Party of the Soviet Union in 1956, Khrushchev delivered the famous speech denouncing Stalin, his personality cult, and his dictatorship. Demolishing of Stalin’s monuments began all over USSR. It became clear that he should be taken out of the Mausoleum – because Stalin had betrayed Lenin’s ideas.

A final decision was made at the 22nd Congress of the Communist Party. The decision was made to look like a request from workers of Leningrad and was voiced by Ivan Spiridonov, a Party official, on October 30, 1961. The absurdity surrounding the two corpses was thickening. 80-year-old Dora Lazurkina, a famous Bolshevik and Lenin’s disciple and follower, then announced that the day before, she had “counseled” with Lenin. “He stood before me as if he was alive, and said, ‘I’m uncomfortable being next to Stalin, who brought so much trouble to the Party.’” 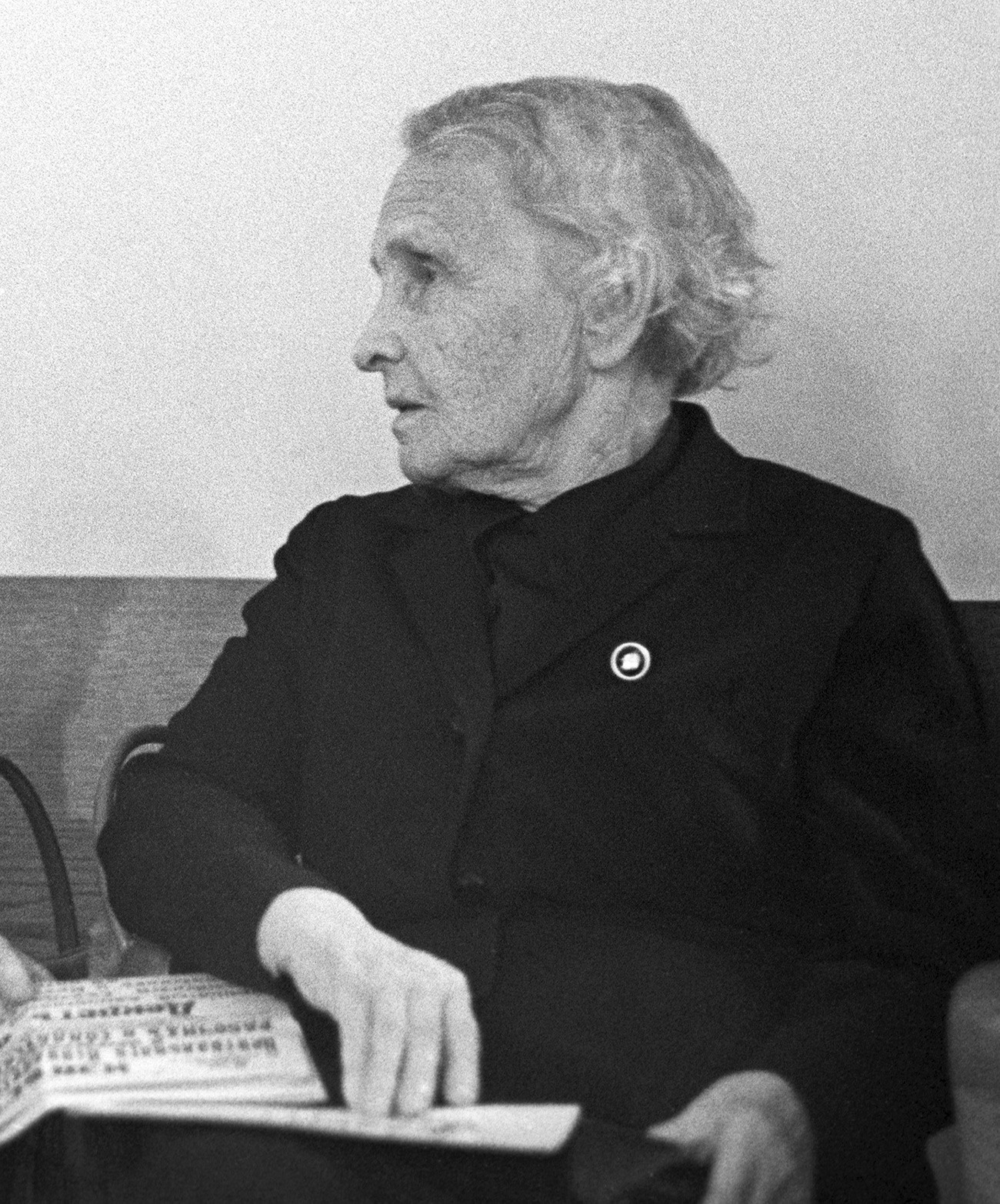 The decision was to be implemented immediately – authorities feared that some of the Soviet people who still supported Stalin might intervene, or even revolt. So on October 31, under the cover of the night, Stalin’s body was first taken out of the Mausoleum to a laboratory located underneath it and then taken out of the building to be buried near the Kremlin wall.

Why on Halloween? Many believe it is just a coincidence. But on October 30, the Tsar , the most powerful nuclear weapon ever created, was tested at the Novaya Zemlya archipelago in the Arctic Ocean. So the following day, it was the bomb that made the headlines, while the reinterment of Stalin went by largely unnoticed. There were no protests or anything, the operation was kept a secret regardless.

‘Stop Stalin from ever rising again’ 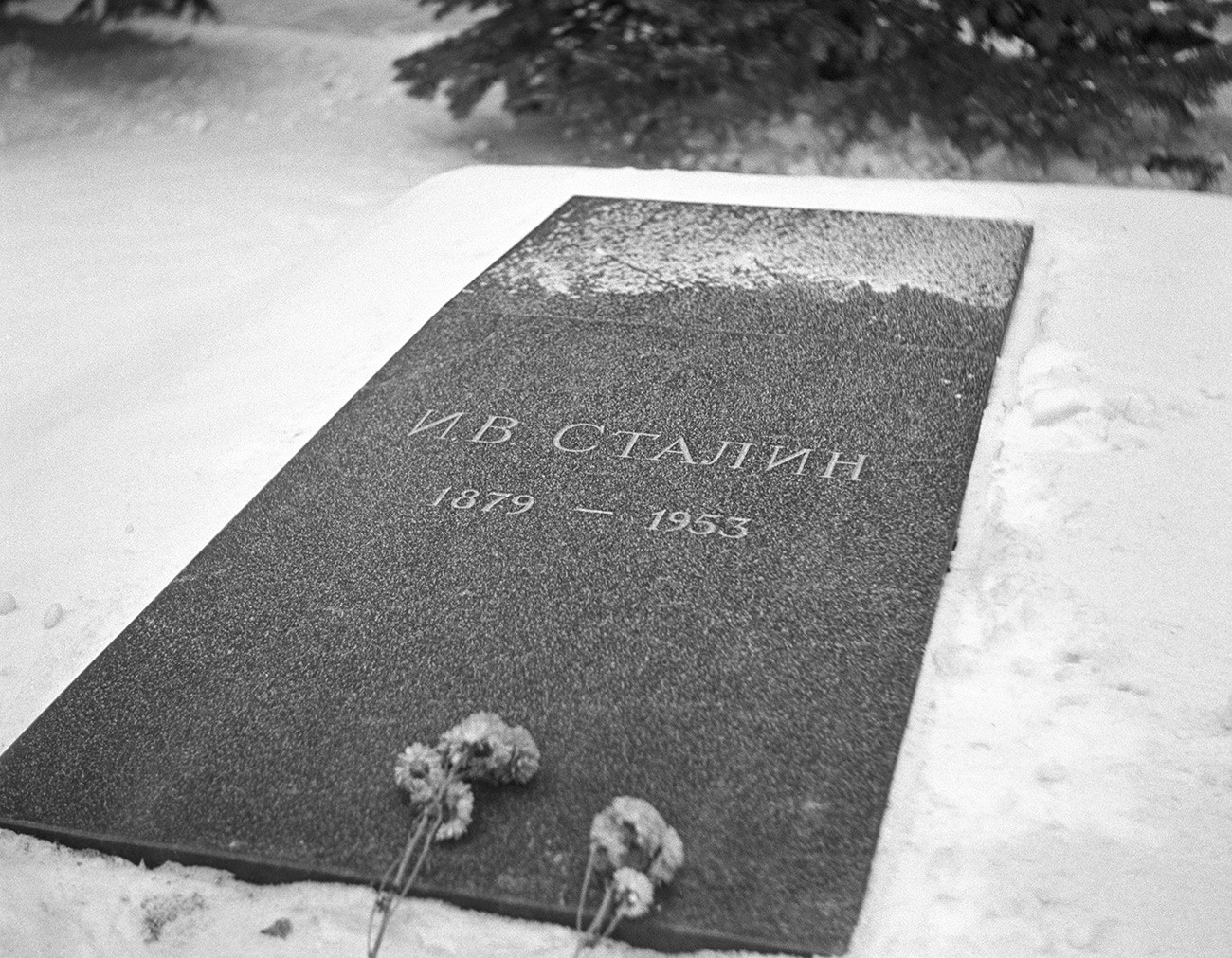 On October 31, the Red Square was closed because of preparations for the parade that was to take place on November 7th, marking the anniversary of the October revolution of 1917. The flanks of the Mausoleum were covered with cardboard, so not even soldiers who marched on the square couldn’t see anything.

All decorations and awards were removed from Stalin’s jacket; even the golden buttons and epaulets were taken off. About 30 most devoted (and taciturn) KGB and military officers were involved with the reinterment. Stalin’s relatives were not present. His body was placed in a wooden coffin, the cover fastened with nails, and the grave was covered with a concrete slab. Stalin is the only person who was buried near the Kremlin wall without a funeral service, orchestra or salute.

The next morning, the Mausoleum opened again, but with only Lenin inside. Additionally, during the night, the original monolith with the sole inscription “L-E-N-I-N” was returned – so, commandant Moshkov who preserved it turned out to be right after all. 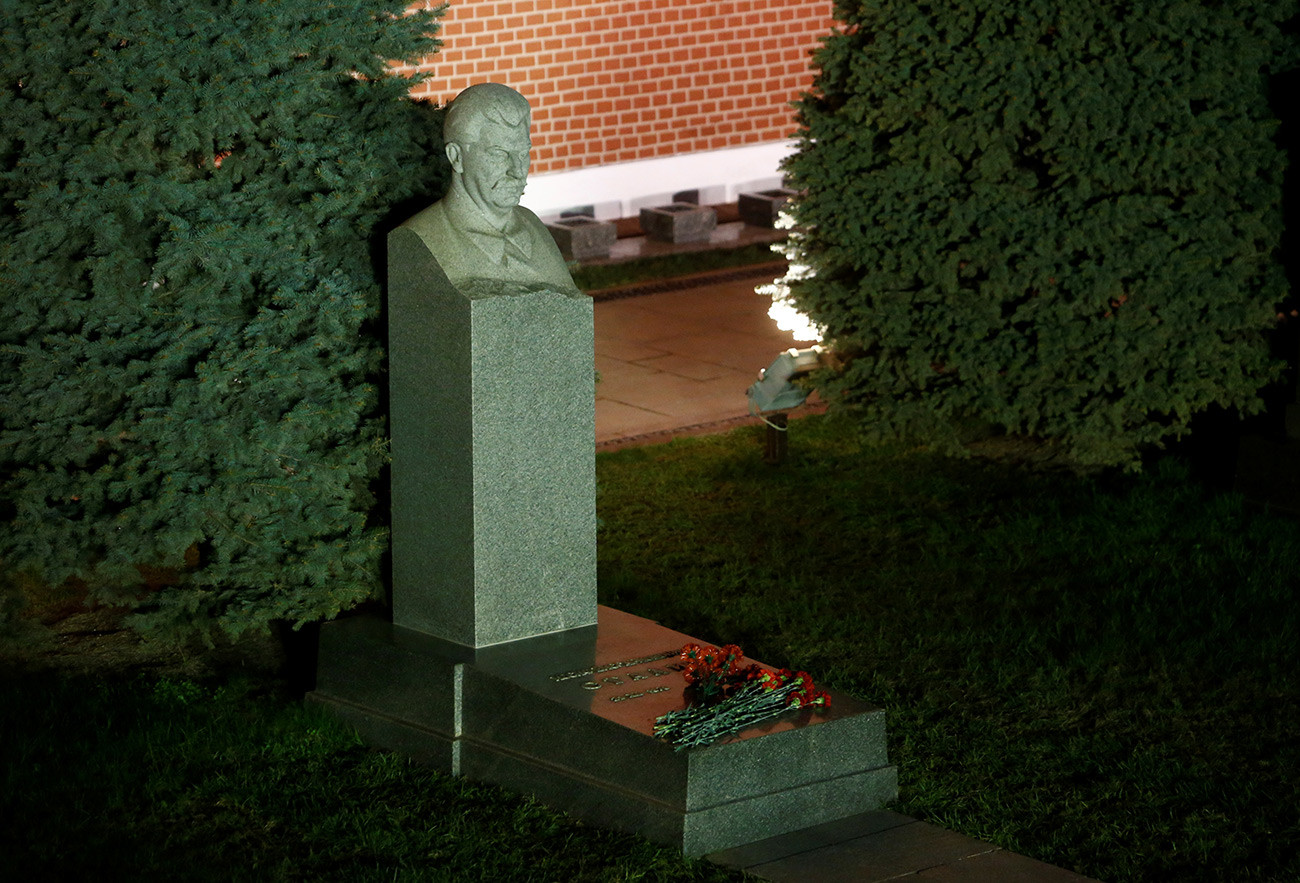 Stalin's tomb near the Kremlin wall.

A year later, Soviet poet Yevgeny Yevtushenko, who was always loyal to the regime, published a poem in the ‘Pravda’ newspaper. The poem was called ‘The Heirs Of Stalin’ and called upon the Soviet people to forever say goodbye to the tyrant:

‘And I, appealing to our government, petition them to double, and even triple, the number of sentries guarding this slab, and stop Stalin from ever rising again and, with Stalin, the past’.