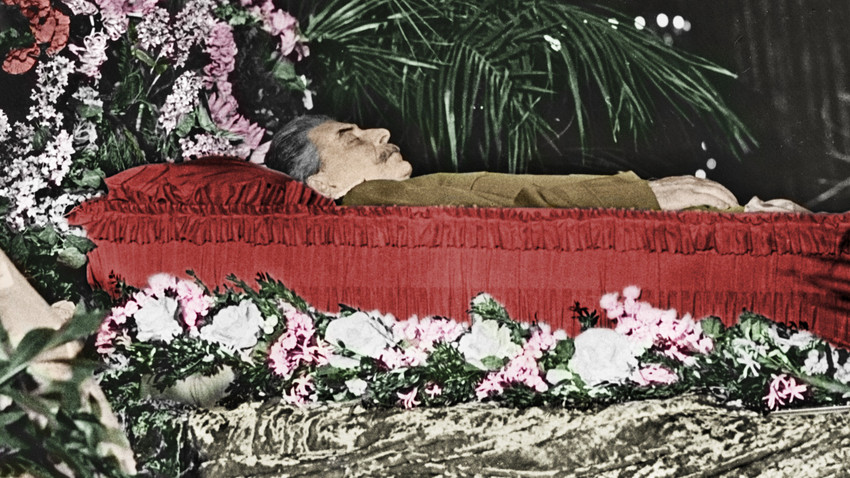 Getty Images
In 1953, the USSR mourned Joseph Stalin, the ruthless leader who to this day remains the most controversial figure in Russia’s modern history. Tens of thousands of people wanted to see the leader’s body, but the authorities failed to organize the state funeral properly, and the consequences were tragic.

Stalin died of a stroke on March 5, 1953 in his country residence. Next day the Soviet Union heard the official announcement on the radio. The journalist said, his voice full of grief: “The heart of the collaborator and follower of the genius of Lenin's work, the wise leader and teacher of the Communist Party and of the Soviet people, stopped beating.”

For most Soviet people, it was like hearing about the death of God. Whether they loved or hated the almighty Stalin, they lived under his will for the previous 30 years. Several decades of rapid industrialization had turned a predominantly rural country into an economic giant; but there was also the murderous purges and famines, and a horrifying war against Nazi Germany, and its glorious victory – all this happened on Stalin’s watch. And now he was gone.

The Moscow-based Dynamo engineering works personnel listen to the radio as Joseph Stalin's death is announced.

those who grew up on official propaganda and knew nothing about the scale of Stalin’s terror, his death came as a catastrophe, something worse than their own father’s death. All over the country, people were bawling their eyes out. Today, we could see something close to this when Kim Jong-Il died in 2011 and millions of North Koreans were hysterically crying as they marked his passing.

Anastasia Baranovich-Polivanova, who was a student in 1953, recalled: “In our univer,sity I saw a party official weep so hard that she couldn’t even stand… and our Marxism teacher, a very nice person, actually, said: ‘If one would ask what’s most important for me… I’d say my daughter, of course. But if I could give her away to resurrect him I would do that.’”

Stalin’s personality cult was so strong that even those related to victims of his repressions mourned him. “My mom told me that they all cried when they heard about Stalin’s death, and she, a child, also cried, because of senselessness, powerlessness, because life lost its meaning… My grandma cried as well, which sounds surprising to because my grandpa had been repressed,” recalls Tina Kandelaki, a TV presenter of Georgian origin. 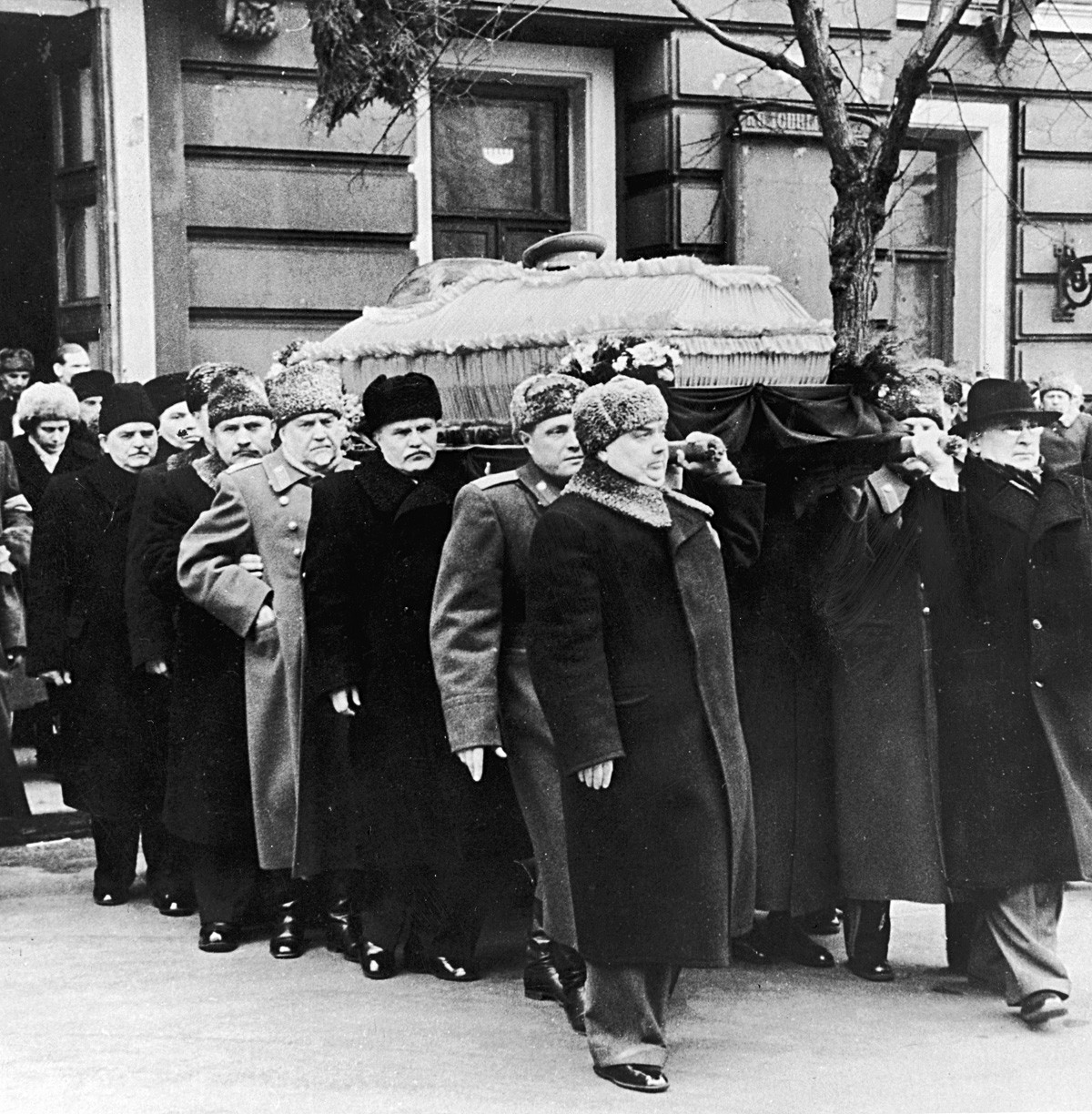 The coffin of Soviet political leader Joseph Stalin (1879 - 1953) is carried by his closest officials.

course, not everyone was hypnotized by Stalin’s charisma and propaganda machine, especially those who languished in prison and in the or were exiled under false charges. They saw the death of Stalin as deliverance.

“We were in Siberia, near Norilsk (2,800 km northeast of Moscow), digging a foundation pit,” said Anatoly Bakanichev, who was imprisoned in a camp after being a POW in Germany. “I was slogging the permafrost with a pickaxe when I heard my partner from above: ‘Tolya, get out here, the bastard is dead!’ Every camp inmate was joyful, you could notice it. Someone even was told to shout ‘hooray!’ after the news.” 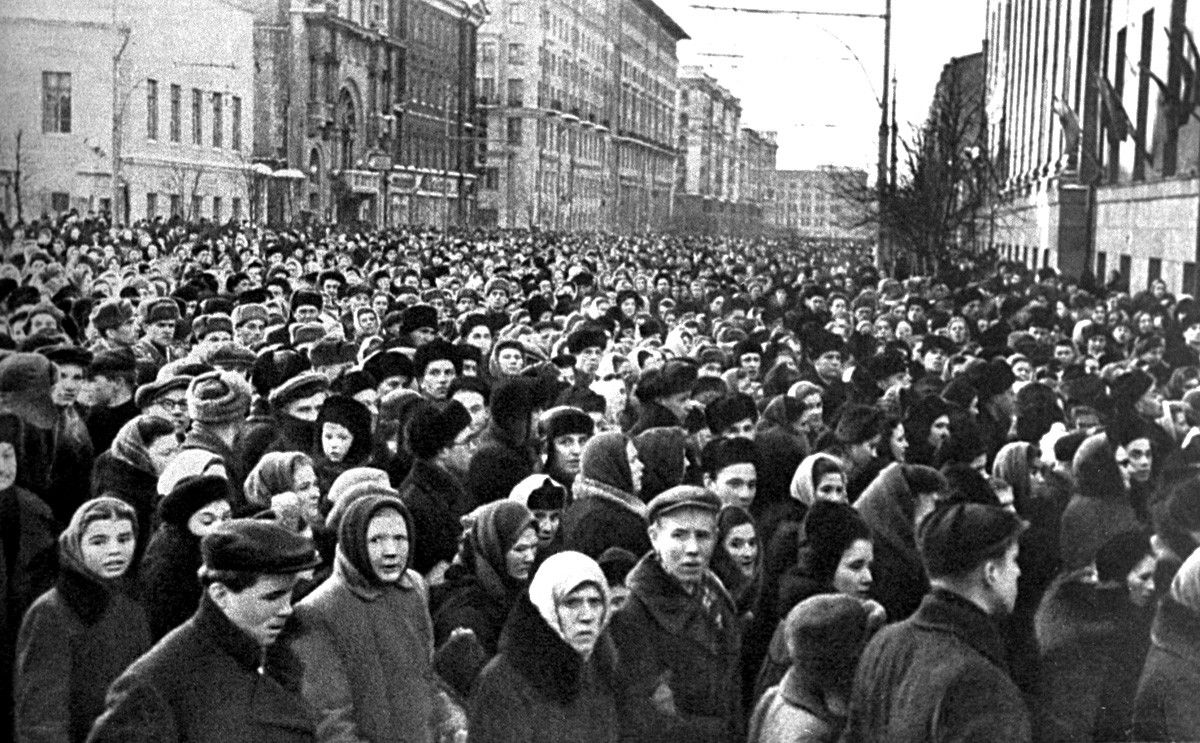 While prisoners in Siberia were silently cheering, in the party bosses organized a farewell ceremony. This was not an easy task given that a TV was a rare thing in the USSR in the early 1950s, for thousands of people, the last opportunity to see Stalin was to attend the funeral ceremony and view his body in the coffin. And so they tried to, rushing to the House of Unions in the Moscow center, where the leader’s body was lying in state.

The viewing line that stretched through the center of Moscow was clearly marked and guarded by the police and army, which used vehicles to maintain order (as they hoped). Then, on March 6, 1953, people came in large crowds to Trubnaya Square from the narrow Rozhdestvensky Boulevard, and found the square partly blocked with cordons of trucks and troops on horseback.

There wasn’t enough room for people to pass, yet they couldn’t go back as the others were still coming. “The crowd got more tightly packed and you couldn’t move, you just had to go with it, unable to escape the flow,” said Yelena Zaks, one of the thousands of people caught in the crowd. She was lucky enough – when she was passing by the guarded fence, one of the soldiers standing up above grabbed her and took her out of the crowd, possibly saving her life.

Many others were less fortunate. “The whole crowd was moaning… some people died, pressed hard against lampposts and trucks… My grandfather, who was there, told me that at some point he heard a strange chomp under his legs; he looked down and saw human guts,” tells TV journalist Anton Khrekov. The next morning many people had to look for their relatives and friends in hospitals and morgues.

Today, 66 years later, it’s still unclear how many people died that day: estimates differ from several dozens to several thousands, and official statistics remain classified. Yet the one thing is clear: even in death, Stalin’s power loomed large over the country, and carnage literally followed him to the grave

is how Stalin died. If you want to find out some information on the ruthless power struggle that followed his death, read our text.