History
Georgy Manaev
Public domain, Hermitage Museum
How often did the tsars visit the bath, what did they use instead of soap, and who of Russian emperors had the first shower in Russia?

Foreign guests to Russia in the 17th century were in awe at the number of public and private baths in Russia and the frequency of bathing. Did it mean that Europeans bathed less than Russians? Yes and no.

Did Russians bathe more than Europeans? 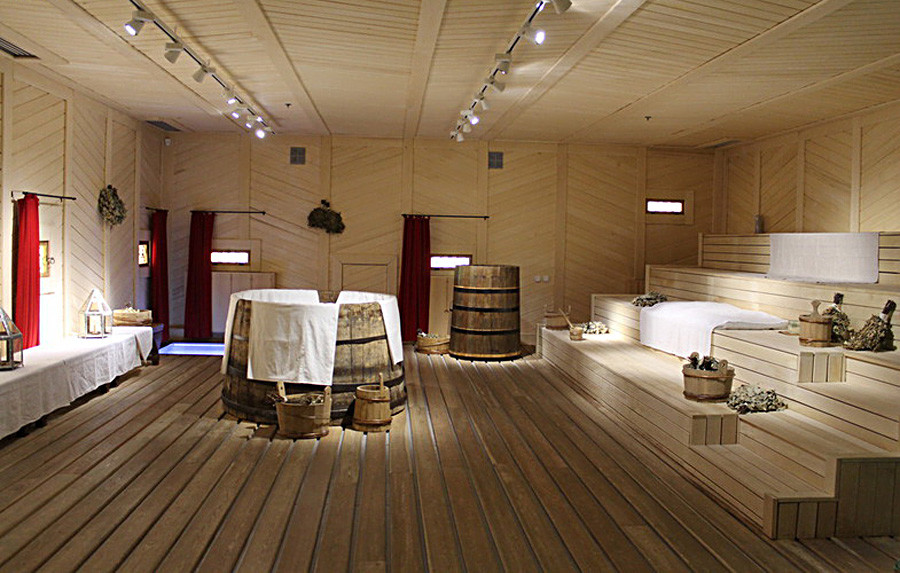 The reconstructed tsar's bath of the 17th century in Kolomenskoe

The 13th - 16th centuries were the heyday of the bathing culture in Europe. Every city had dozens of public baths. In 1334, Vienna had 26 of them, Frankfurt – 29, Paris – 30… But by the 15-16 centuries, most public baths had been closed, and Europeans bathed less and less frequently, including nobility and royals.

There were several reasons for this. Firstly, in the 14th century and beyond, the Black Plague halved Europe’s population. After decades of death, many surviving people lost their desire to visit public baths. Secondly, the Protestant religious views prohibited the bathing of men and women together and condemned public nudity as a sin. And finally, the most important reason – the Little Ice Age, which lasted roughly from the 14th to the 19th centuries. Because of the cold, Europe’s forests diminished considerably – everybody needed the firewood to heat their homes. The cost of firewood skyrocketed, making bathing a very expensive pastime.

But this wasn’t so true for Russia, which had extensive forests and plenty of firewood. So Russians bathed as much as they wanted – usually no less than once a week.

Lye for the tsar 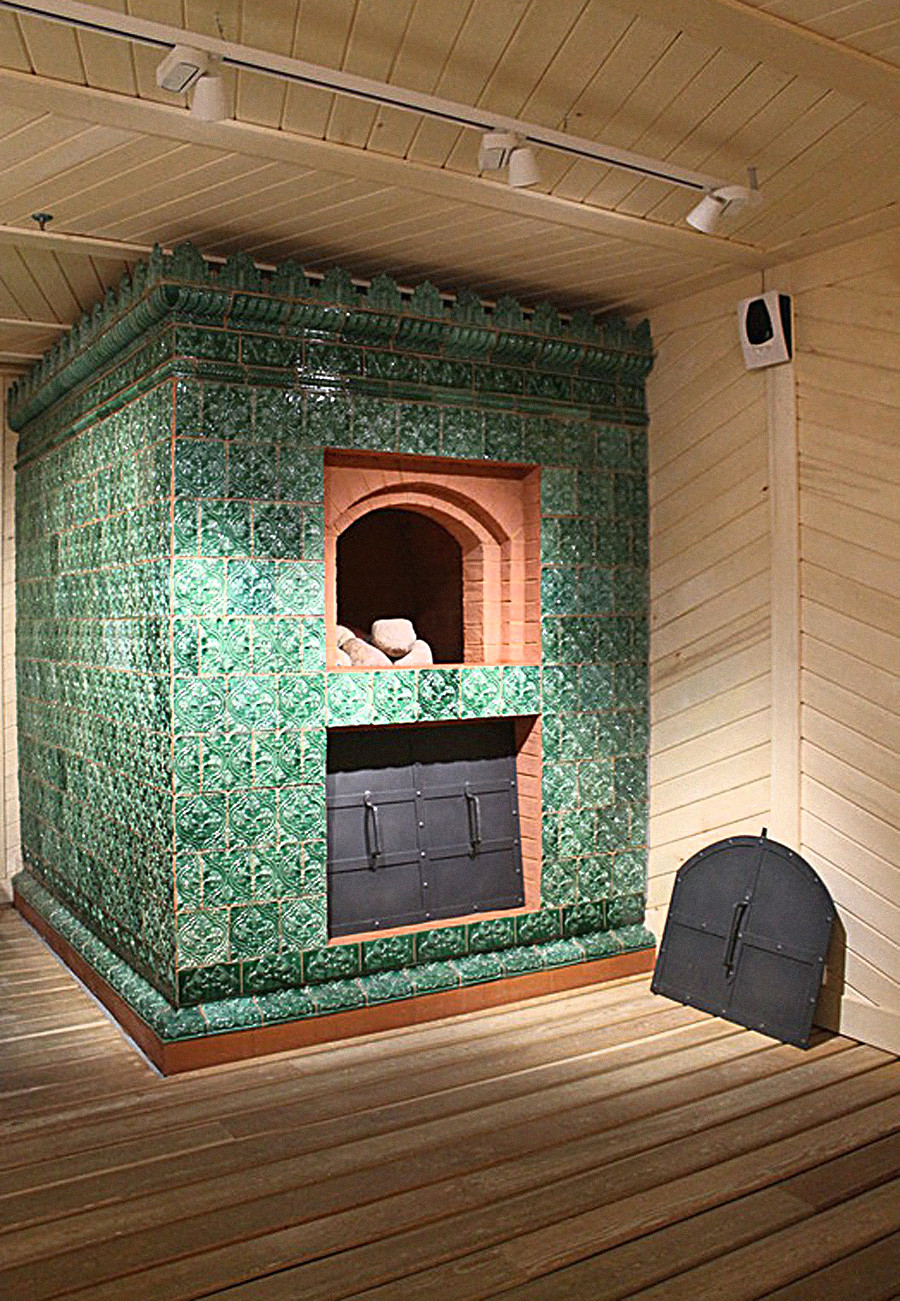 Any palace of the tsar had baths, each one of them called “” (literally ‘washery’). There were separate baths in men’s and women’s quarters of the palace. The tsar’s bath was a spacious installation. The anteroom was used for rest before and after bathing. The floor was covered with fresh fragrant hay, and pillows strewn around were filled with it. 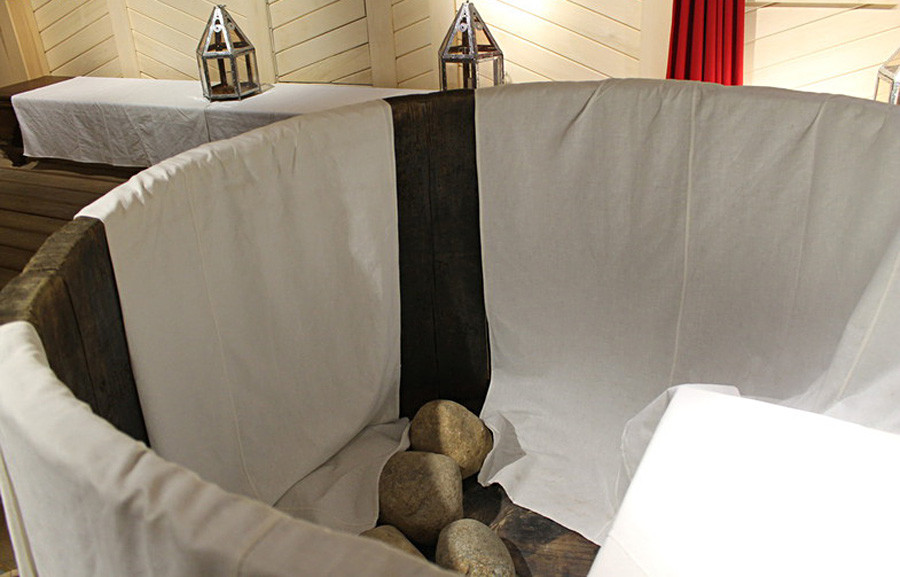 Inside the bathing room, a Russian stove was installed, where stones were heated. The water was heated by throwing the stones into a large basin where the tsar was seated afterward. You can visit a reconstructed Russian tsar's bath in the Palace of Tsar Alexey Mikhailovich in Kolomenskoe, Moscow.

Birch firewood was used to feed the stove, and birch besoms were used for massaging – birch contains a lot of tar, so Russian baths were also hypoallergenic and stimulated the immune system 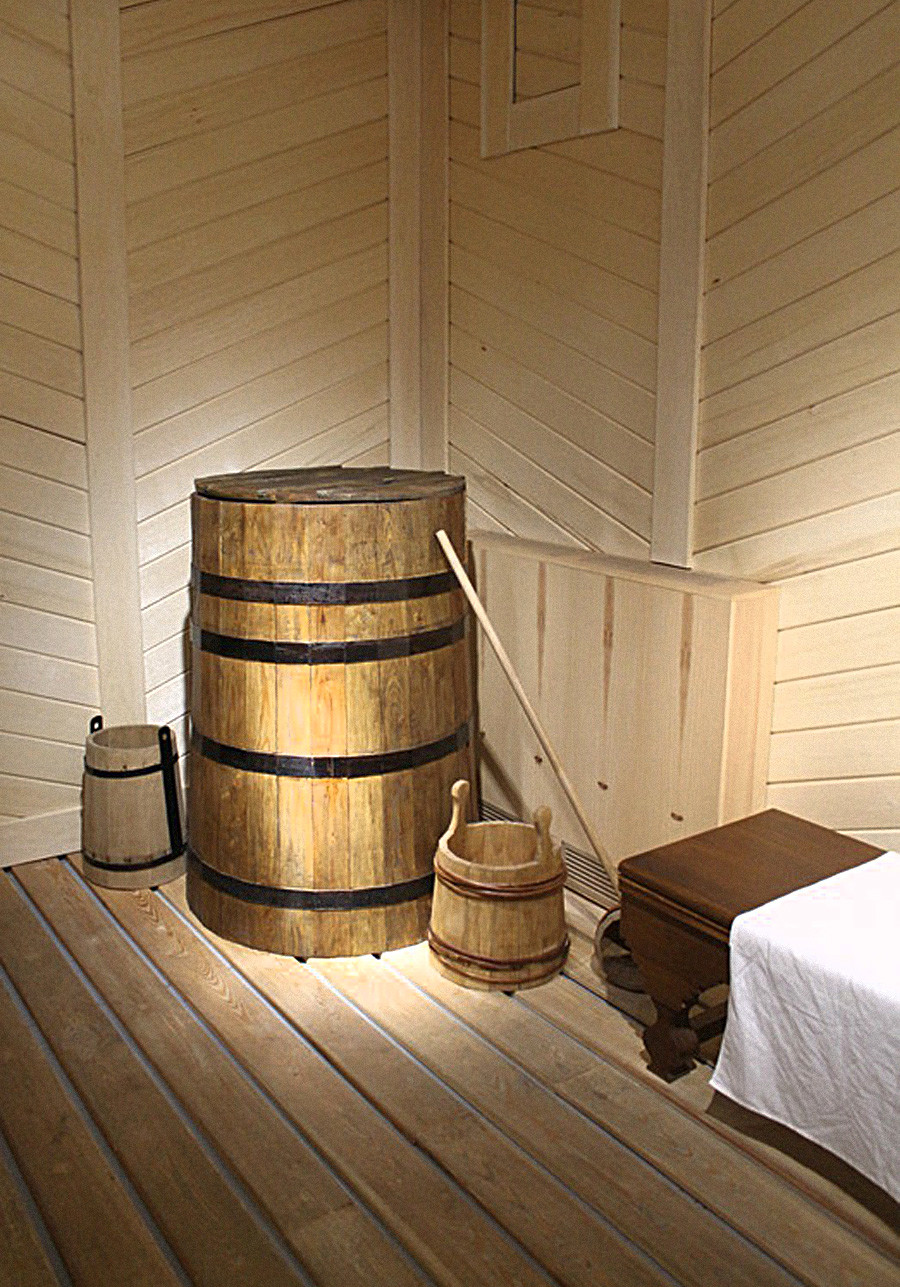 The reconstructed tsar's bath of the 17th century in Kolomenskoe

sometimes washed with soap, but in the 17th century, simple lye (a metal hydroxide traditionally obtained by leaching ashes) was also used for washing the body, and rose water (or sometimes dog-rose water) was used to wash hair. Largely, the tsar’s bath habits were the same as all other Russians.

Russian emperors: Bathing as a 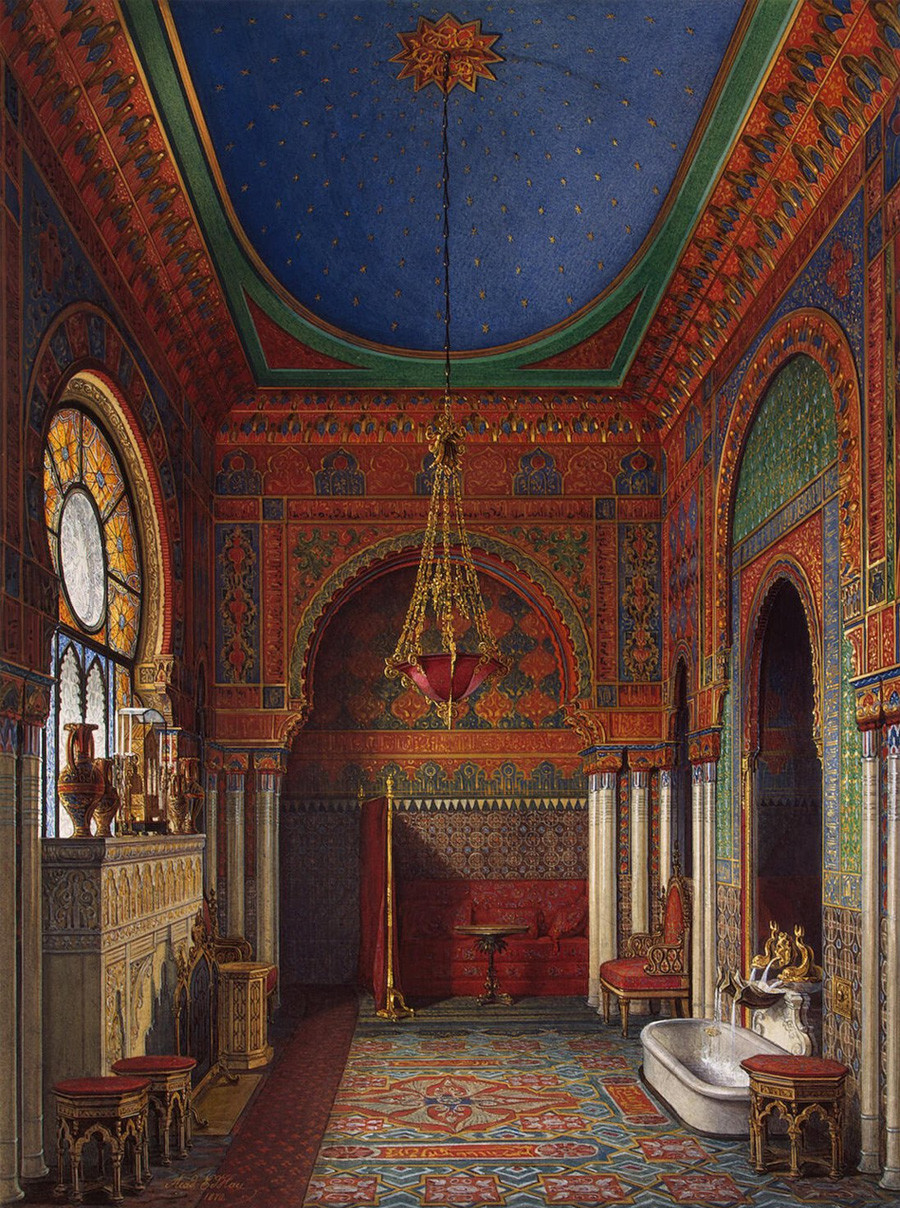 Eduard Gau. The bathing room of the Empress Alexandra Fyodorovna

to the European traditions of the 18th century, royal bathing was a pompous ceremony. But in the Winter Palace of Russian emperors, a traditional Russian bath merged with European-style baths.

Peter the Great organized such ‘combined-style’ baths in his palace Monplaisire (located in Peterhof, outside St. Petersburg). Now, this bathhouse is available for visiting, but it was rebuilt in 1866. 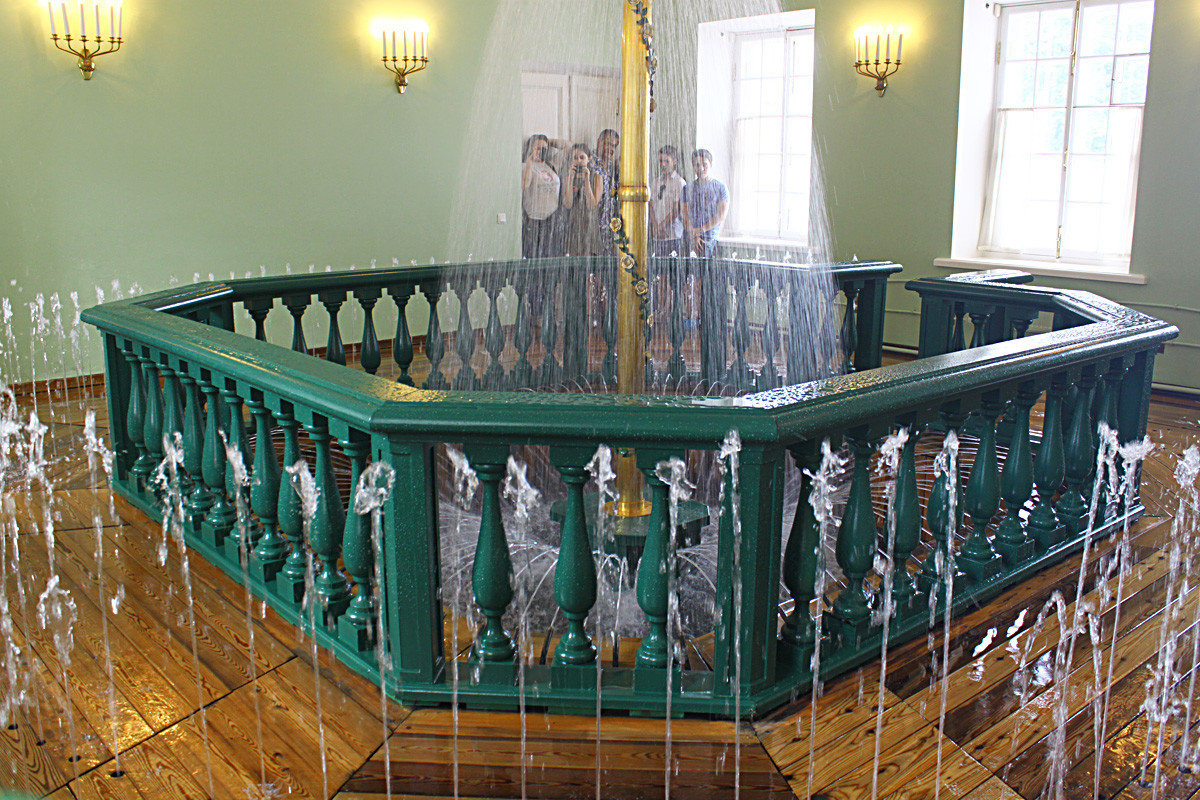 The fountain in the bathing rooms in the Monplaisir Palace

Peter’s daughter, Elizabeth of Russia, had imperial-level baths, with ceiling paintings designed by Italian artist Antonio Perezinotti. In the bathhouse of Emperor Alexander I, the walls of all rooms were decorated with murals. It also had a study with a working table and other furniture.

The bathroom (pictured by Eduard Gau) of Empress Alexandra, wife of Nicholas I, decorated in Mauritian style, was 40 sq. meters in size. Its cost was about 42,000 rubles – a 20-year annual pay of an Imperial Minister. In 1834, the Empress allegedly had a big reception in this room.

Her husband, Nicholas I, didn’t like to bathe often: for example, in 1833 he washed in his private rooms 11 times and went to the Russian bath 4 times. But he was probably the first man in Russia who used a shower. By the 1840s, he had in his rooms a 3-meter high cabinet with a “rain apparatus”, as historical documents put it. The cabinet had 10 shower heads inside, on the top and at the sides – just like contemporary showers with jacuzzi functions. He borrowed this idea in England, which he visited in 1844 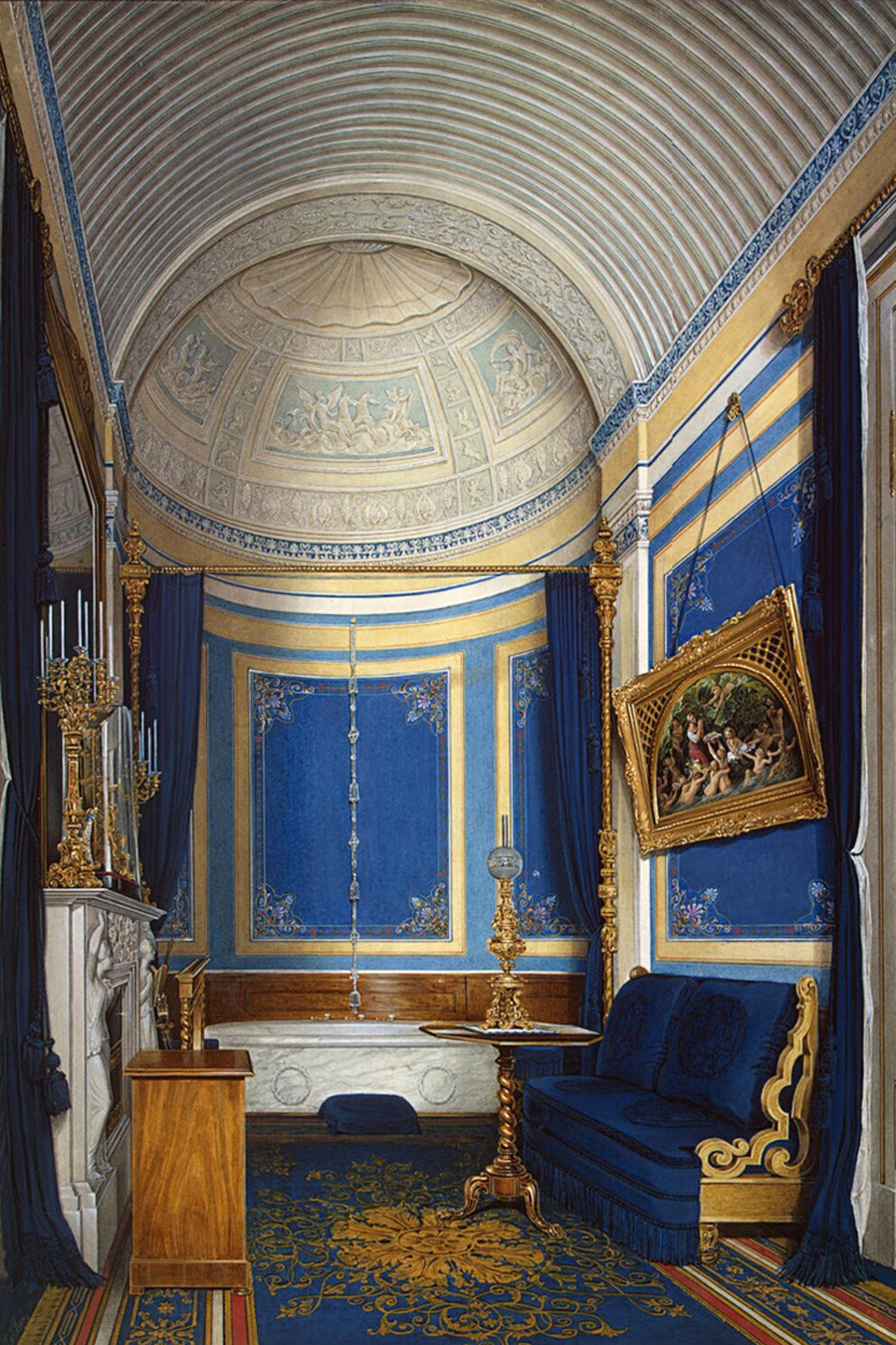 Eduard Gau. The bathing room of the Princess Maria Alexandrovna

Winter Palace’s baths were often renewed, as different emperors had different bath habits. Men’s baths were usually in the basement, and baths for royal ladies – on the ground floor. Alexander III, who always underlined his Russian origins and habits, loved to bathe with friends and associates. His son Nicholas II ordered the building of a marble swimming pool. It was accessible by a stairway from his study, and the water for it went through a series of filters. “I splashed with delight in my bath, and, after coffee, got down to the tiresome telegrams,” Nicholas wrote in his diary on January 1st, 1896.