Did you know Russian pirates terrorized the vikings? 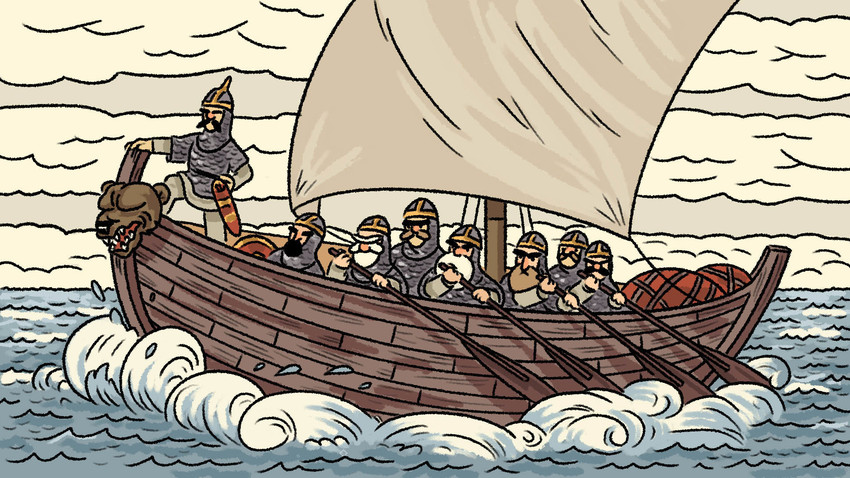 Tatiana Manaeva
If you thought there was no navy fleet in Russia before Peter the Great, think again! ‘Ushkuiniks’ were river pirates from the Russian North that pillaged Sweden, Finland, Norway - and even the capital of the Golden Horde, Sarai Batu.

The Cathedral of St. Sophia in Novgorod, built in the 12th century, features a wonderfully crafted ancient gate. In 1187, the gate was brought here as a loot from the town of Sigtuna, Stockholm County, Sweden – a royal and commercial center of Sweden in those days. 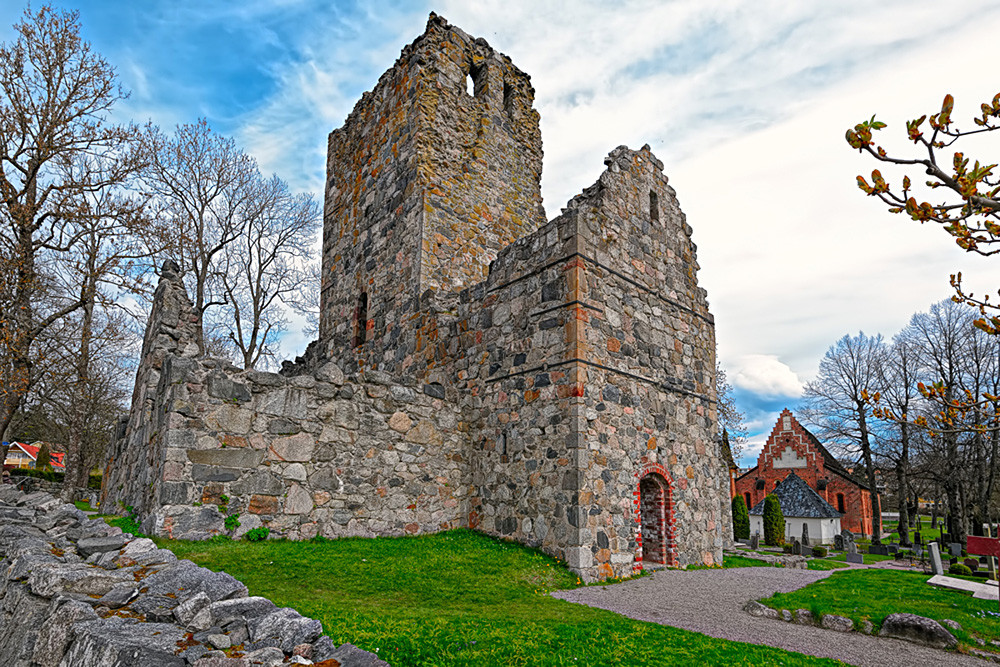 But in the 12th century, Russian lands weren’t strong enough to defeat the Swedes together, so the city was conquered and looted by a group of Novgorod rogues, who traveled upstream in boats along the Vuoksi river running through the northernmost part of the Karelian Isthmus, from Lake Saimaa (Finland) to Lake Ladoga (Russia, Novgorod Region). They would cross the sea and arrive at Sigtuna unnoticed, thanks to the swiftness and lightness of their boats. They were the ushkuiniks, the legendary river pirates of the Russian North. 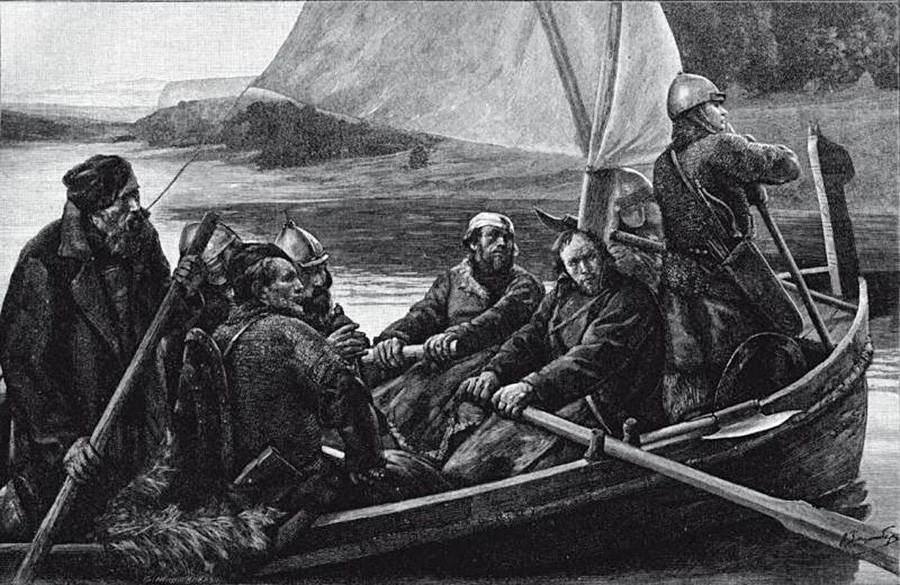 Ushkui – that’s how Russian northerners called a polar bear. The heads of these bears were usually impaled on the bow of their boats so that they were also called ushkuis.

They were sailing-and-rowing vessels, equipped with 6 pairs of oarlocks for a dozen rowers, and a mast for a single sail. 3 meters wide, about 12 meters in length, they were super maneuverable and could carry up to 40 men. These vessels helped the ushkuiniks become the most menacing pirates in early Russian history.

They emerged in Novgorod, the most powerful city-state of ancient Russia. Novgorod was governed as a republic and had lots of free people who didn’t want to work, trade or be farmhands, but preferred to serve their native lands by the sword. Such people were used by the Novgorod administration to explore and protect the outskirts of the Novgorod land. And the Novgorod authorities didn’t object too much, if, in the course of these “explorations”, their very own privateers would pillage a city or two... 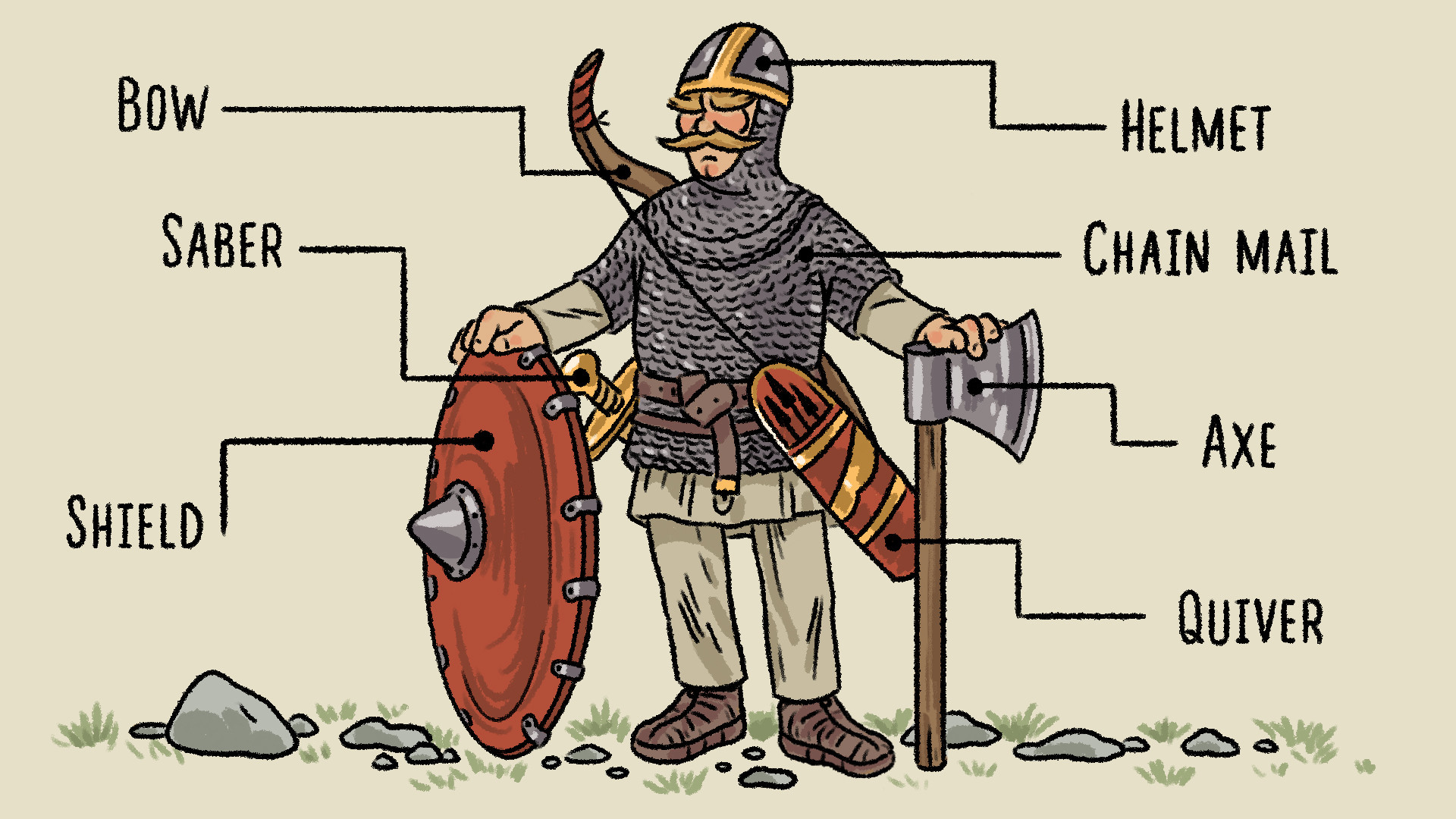 Weapons and armor of an ushkuinik

The Ushkuiniks were really special. Born in the Novgorod region, they were as good as Vikings, and far more experienced and equipped than the average Russian military man of the 12-16 centuries. Being professional fighters, they often came from wealthy families, so they could afford metal armor and weapons like pikes, swords, and sabres (the latter being their weapon of choice, useful in close combat and during naval boardings). They also often employed bows, including heavy crossbows, that would be mounted on their ships.

The Ushkuiniks had their time when the Russian lands were not yet united, so they would lead their own politics, so to say. Their earliest feat was the campaign against the Yugra lands (Ural region) in around 1032, and soon, many other campaigns followed. Just take a look at the most famous of them:

In 1187, the Ushkuiniks took Sigtuna. In 1318, they went as far as Abo (now Turku), the then-capital of Finland, and took its treasury as loot. In 1320 and 1323, they attacked Norway so hard, that Norway wrote to the Pope pleading for help. 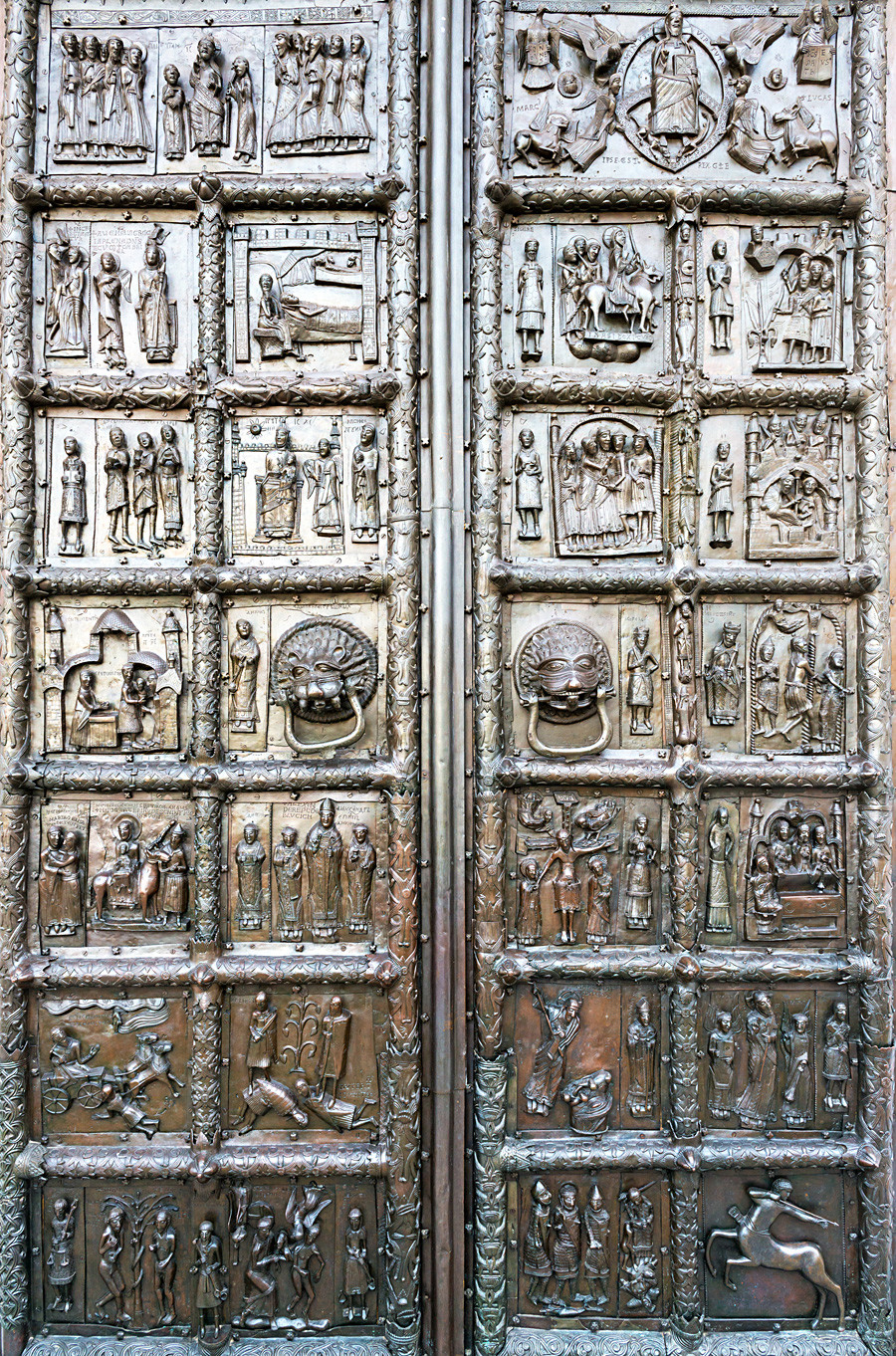 The Sigtuna, or Magdeburg Gates that were taken as loot from Sigtuna. Now, the gates are at the West Entrance to the St. Sophia cathedral in Novgorod, Russia.

In the same year of 1323, the Ushkuiniks helped Novgorod reach the first peace treaty with Sweden, the Treaty of Nöteborg, that finished a 30-year war and defined the border between Novgorod and the Swedish lands.

Even after the Golden Horde had attacked the Russian lands and made them pay tributes, the Ushkuiniks seemed not to care, instead fearlessly pillaging the Horde’s cities. In 1374, the Ushkuiniks held their largest campaign – 90 vessels were involved. They took Sarai Batu, the capital of the Golden Horde and the reign’s richest city. Soon after, Dmitry Donskoy understood that the Horde was not invincible – and in 1380, defeated the Horde in the Battle of Kulikovo.

But the Ushkuiniks ravaged and pillaged Russian cities, too – if the princes who ruled those cities weren’t cooperative: in 1369-1370, they took Yaroslavl, in 1375, they pillaged Kostroma. In 1374, the Ushkuiniks established their stronghold in Khlynov (then Vyatka, now Kirov, 400 kilometers east of Moscow), a town north of Kazan with access to multiple rivers. Vyatka (Khlynov) became the “Ushkuiniks’ capital”. All the while, the Ushkuiniks were making troublesome raids up and down the rivers Kama, Oka, and Volga in central Russia. For this, they earned the nickname: “the Khlynov thieves”. 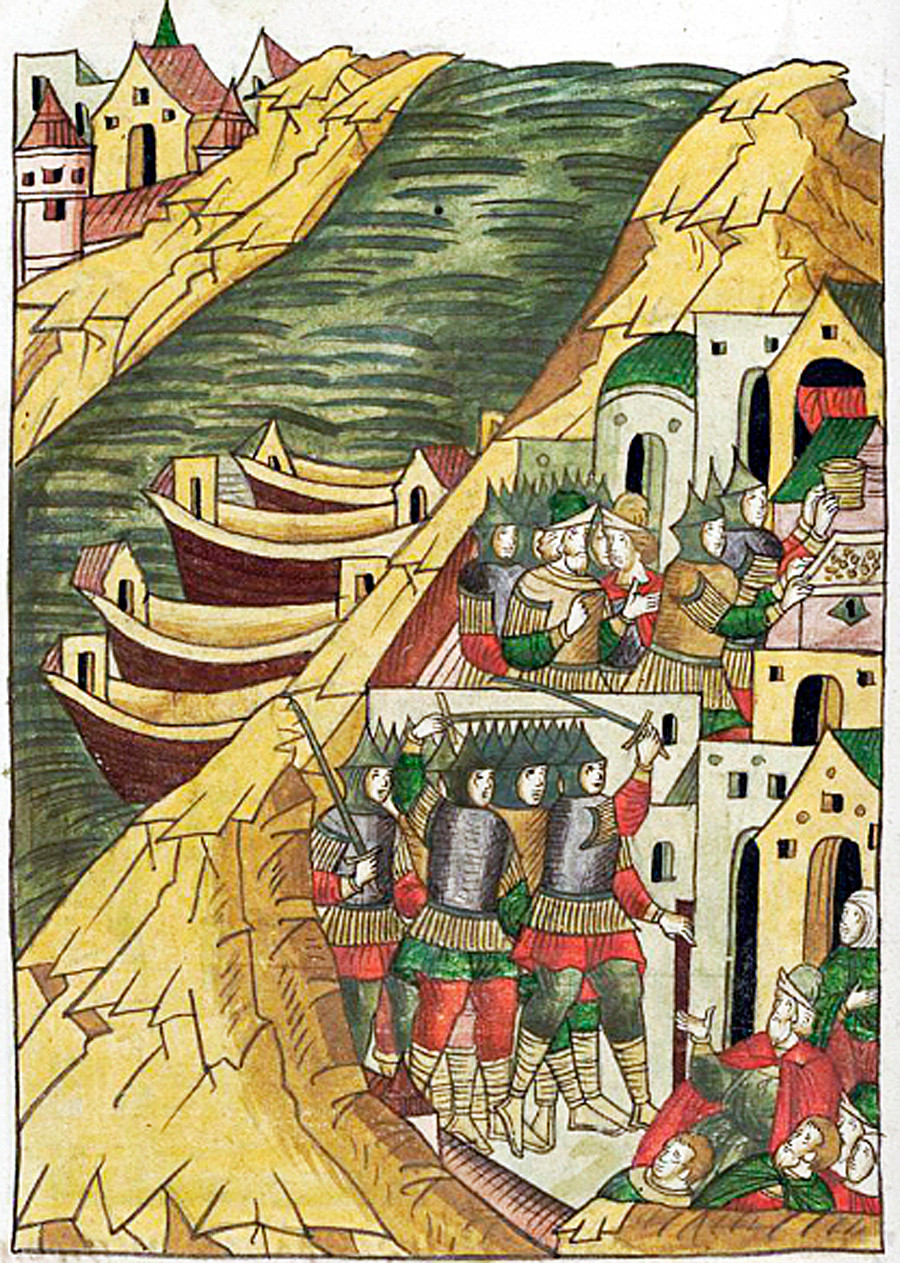 The Ushkuiniks conquer Kostroma. From The Illustrated Chronicle of Ivan the Terrible, 16th century.

By the 15th century, the Ushkuiniks were no longer just a helping hand, but a massive inner threat for Moscow. Stuck between Moscow and the Kazan Khanate, Vyatka people made peace treaties with either of them. And the Ushkuiniks became a massive military force protecting Vyatka. In 1458, Vasily II of Moscow subjugated Vyatka, but in 1466, the Ushkuiniks pillaged Moscow’s lands again, and in 1468, made a treaty with Kazan.

In 1471, the Ushkuiniks took Saray again – but for the last time. It seems the new Moscow Grand, Prince Ivan III the Great, asked them to do it, thus shaking the feeble Horde’s defenses. 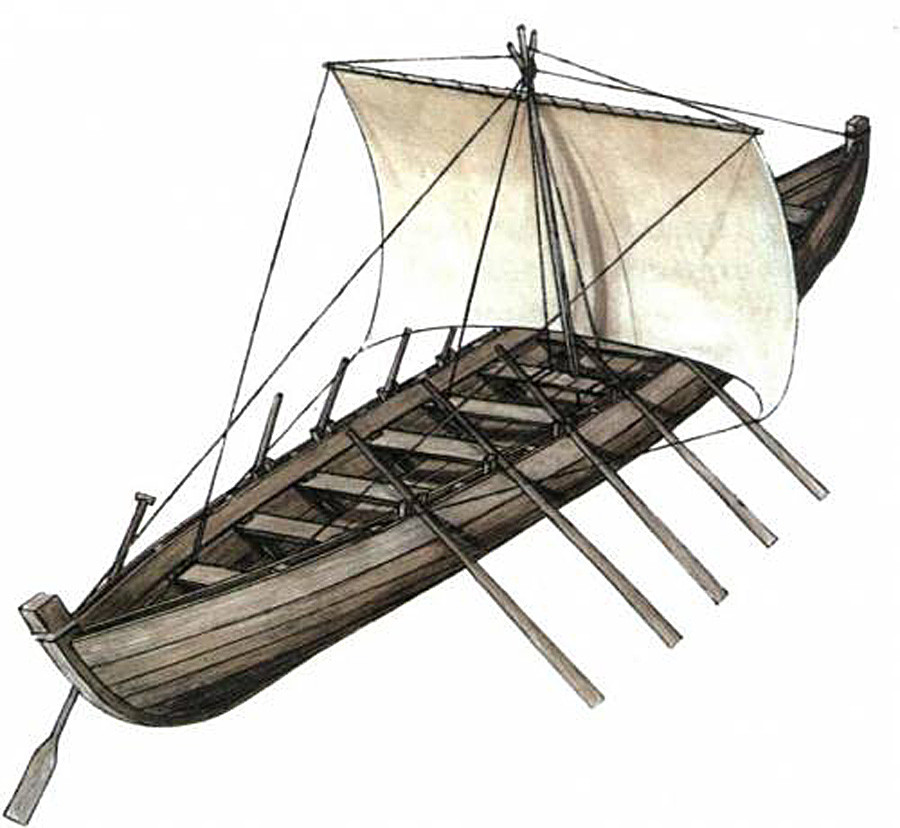 “While going by the Kama River and then to the Volga River in their boats, the Vyatka people took the Tatar Tsar’s town of Sarai on the Volga and slaughtered a multitude of Tatars, taking their wives and children as captives, and, taking a great deal of loot, before returning,” one chronicle said, and another added that the Ushkuiniks even took “innumerable amount of Sarai princesses”.

Just as they did a century before, the Ushkuiniks proved the Horde’s weakness once more. In 1480, Ivan III made the Tatar Mongols retreat in the Battle of Ugra.

But in 1489, Ivan sent a 64-thousand-strong army to Vyatka. He needed the town to be loyal, as a foothold in the war against the Kazan Khanate. After besieging the Khlynov fortress, the Moscow army prepared to burn it – colossal tarred wattle fences were placed against the town’s walls. Intimidated by these preparations, the Vyatka people surrendered.

Most of the town’s noble folk were transported with their families to various towns near Moscow. After that, there are no records about the Ushkuiniks or their famous fleet.