Where did Russia’s symbols of monarchy come from? 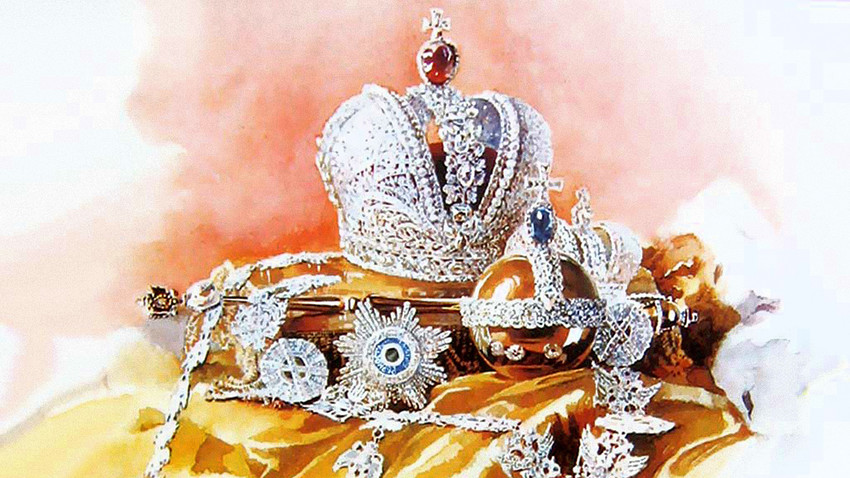 Corornation catalogue May 14th 1896
What were the scepter and orb that Russian tsars used and why did Ivan the Terrible believe his staff had healing abilities?

Holding the in the right hand, and the orb in the left hand, a Russian monarch would seat himself on the throne in the final part of the Russian coronation ceremony. The first tsar to use these regalia was Feodor I of Russia (1557-1598), son of Ivan the Terrible, and the last one was Nicholas II on April 27th, 1906, although, on this occasion, the Emperor didn’t touch the regalia. Instead, they were placed on a ceremonial table to the right of Nicholas II.

Staffs and scepters of the Rurikids and the 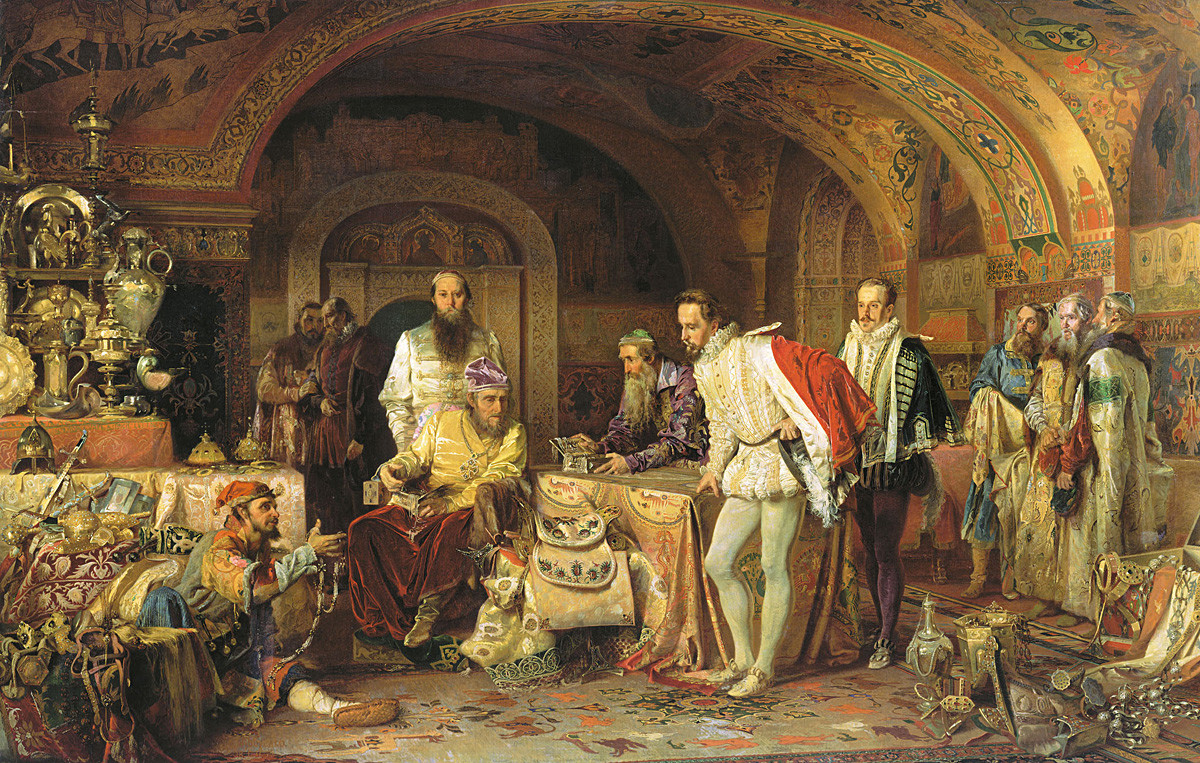 monarch’s staff is probably the oldest symbol of power. Its origins trace back to shepherd’s and holy men’s staffs – which would symbolize a shepherd’s power over his herd and a priest’s power over his parish, respectively. The staff was also often used by high-ranking priests in many different religions. The staff in a monarch’s hand would symbolize the trunk of the tree of life, connecting heaven and earth. 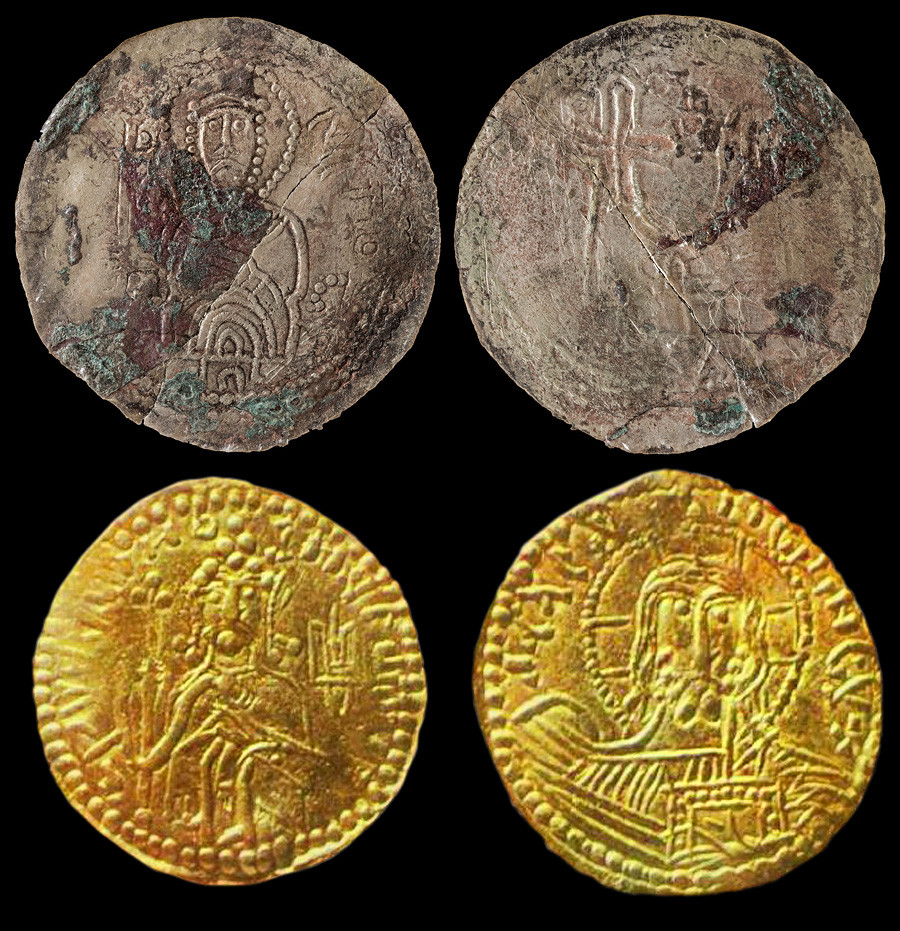 Coins of Prince Svyatopolk and Vladimir the Great

Such a staff can be seen on ancient Russian coins of Vladimir the Great and Prince Svyatopolk. On them, the prince is holding a staff adorned with a cross – such pictures are also found on Byzantine coins of the same era.

A rod, or a scepter, is slightly different – it’s shorter. A rod was used in the military of the Roman Empire as a commander’s attribute, and later, in the Middle Ages, rods were adopted by European monarchs as their attribute of military and secular power. 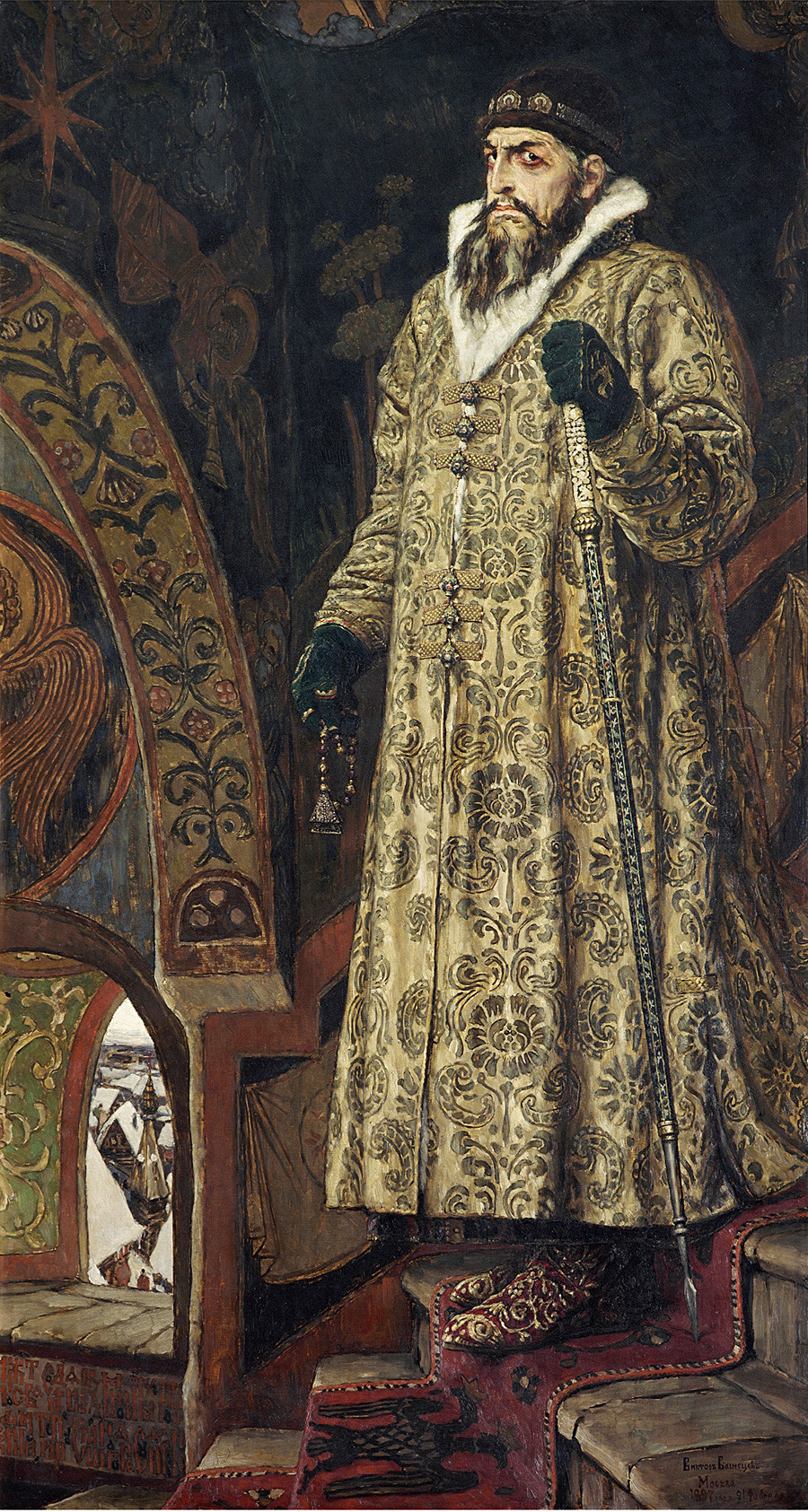 Ivan the Terrible by Viktor Vasnetsov

The first rod in Russia was probably depicted in the illustrations to the Radziwiłł Chronicle (13th century), where Sviatoslav II of Kyiv holds a while meeting German envoys. But officially, a scepter wasn’t used until the 16th century, and princes of the Muscovy Tsardom used staffs as their regalia (along with the crown).

In 1553, English envoys Robert Chancellor and Clement Adams recorded that Ivan the Terrible met them seated on a “gilded seat, with a crown on his head and with a scepter made of crystal and gold in his right hand”. Since then, the tsar always held a scepter during ceremonies.

But, Ivan the Terrible always carried a staff with him as a symbol of his power. Jerome Horsey, another English diplomat in Russia, recorded that Ivan believed his staff, made out of “unicorn’s horn”, had healing abilities! During a conversation with Horsey, Ivan announced: “I am poisoned with .” He then ordered his personal doctor to draw a circle on a table with Ivan’s jewel-encrusted staff topped off with a unicorn’s horn (most likely a narwhal’s tusk) and put two spiders in it. One died and the other ran off, and Ivan said: “It’s too late. It (the staff) will not preserve me.” 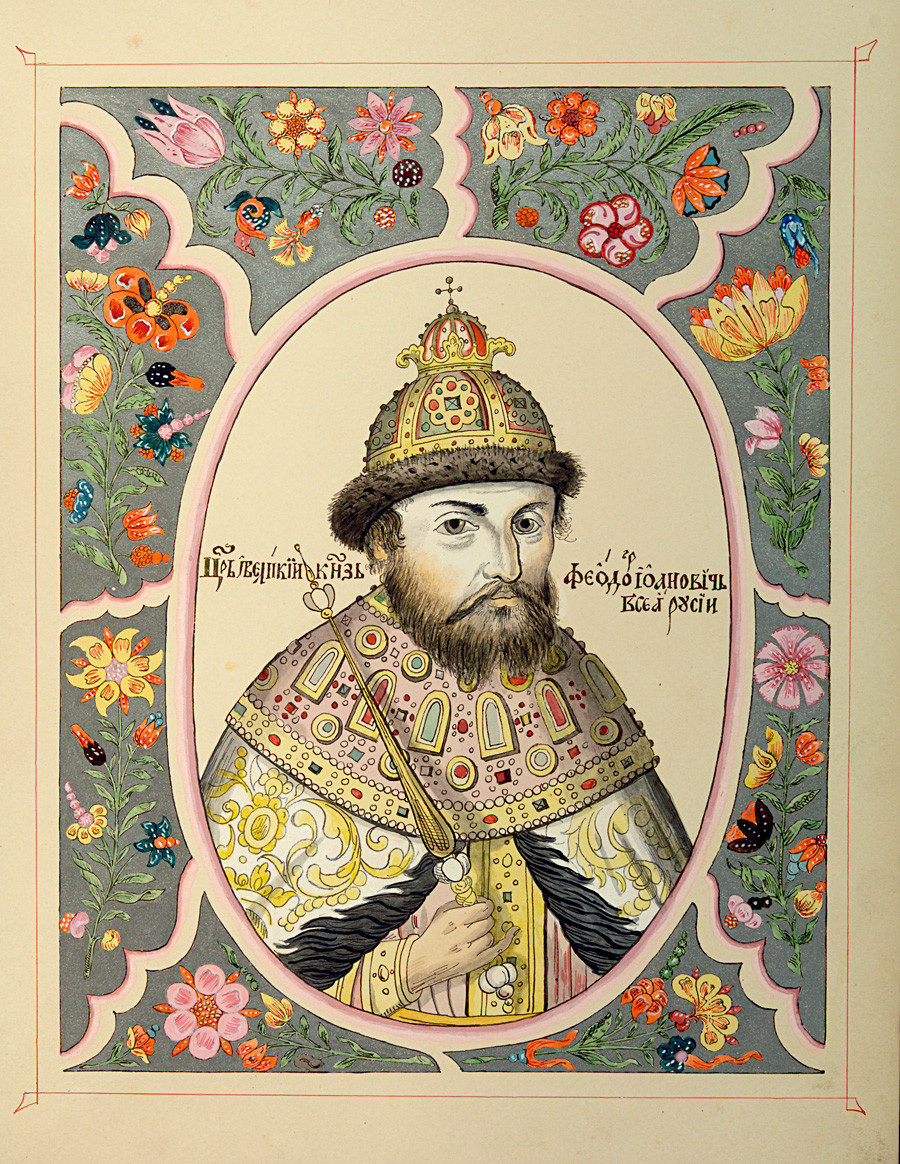 During the coronation of Feodor I of Russia in 1584, Feodor used both the staff, that he held, and the scepter and orb, that both were carried on a pillow before him. Unfortunately, Feodor’s scepter didn’t survive to our days. 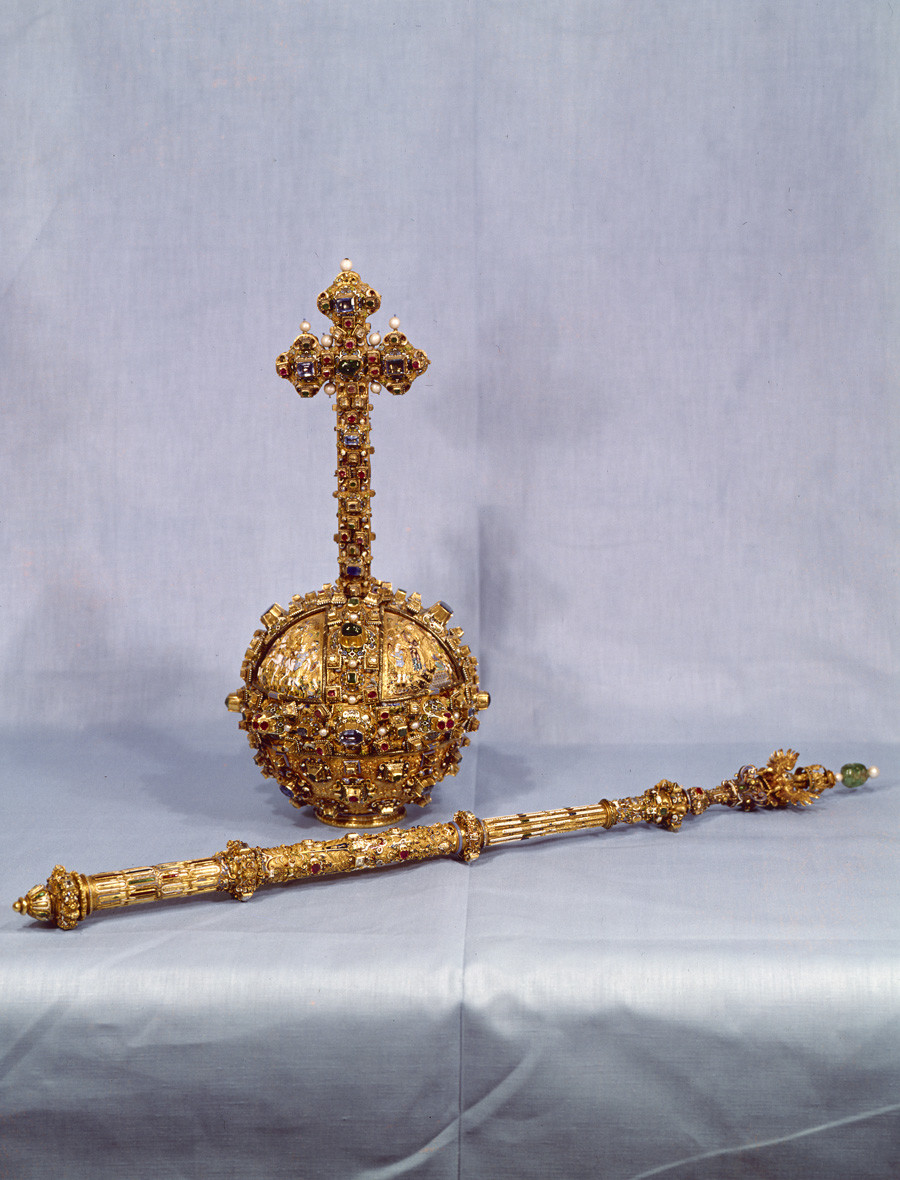 The oldest known scepter of the Russian tsars was the one used by the first Romanov, Mikhail I of Russia, at his coronation and beyond. This scepter was most likely received as a gift from Holy Roman Emperor Rudolf II. Another one, used by Alexis of Russia, came from Istanbul in 1662, together with an orb. 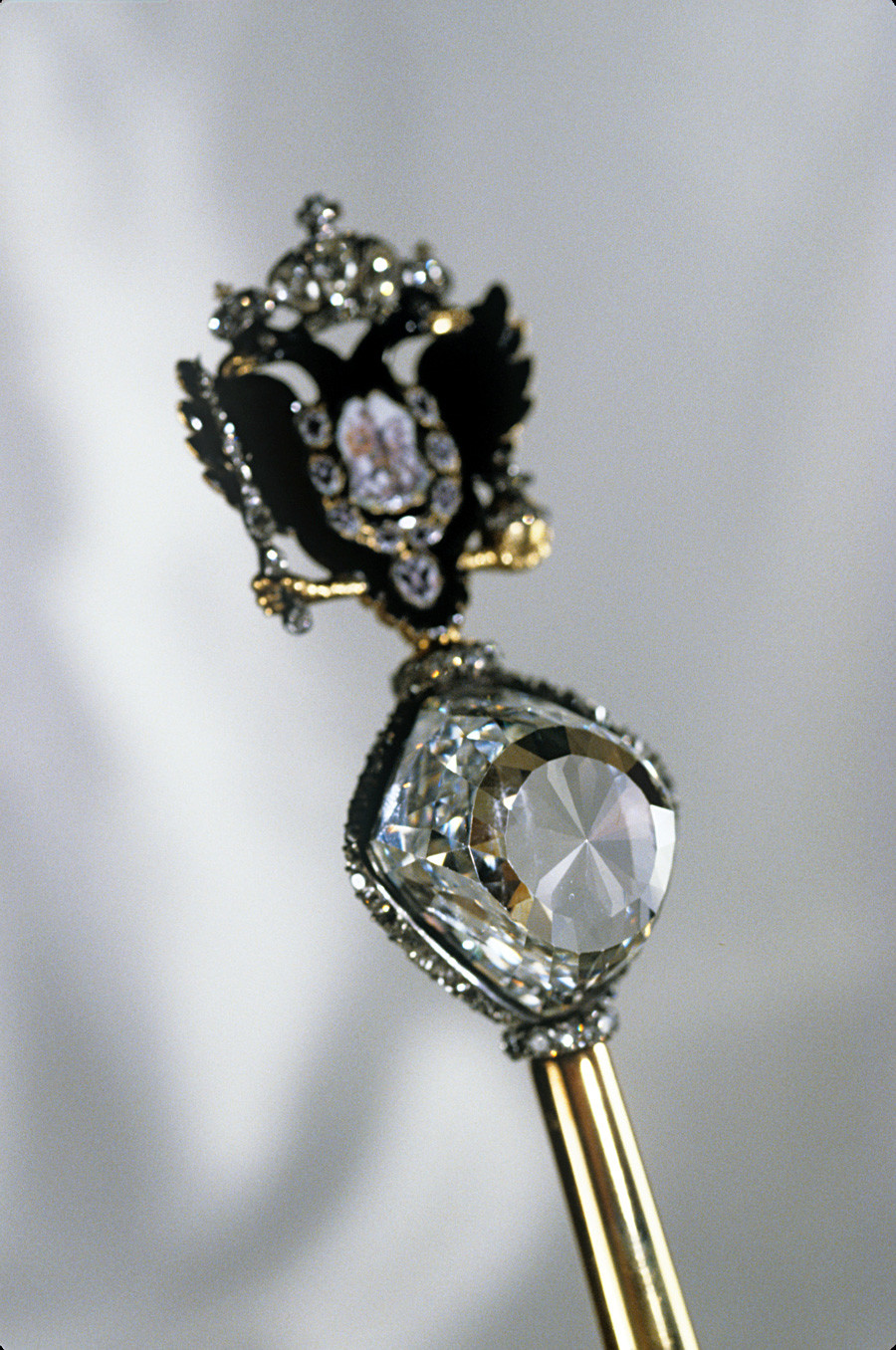 During Peter the Great’s coronation, Peter used an old-styled scepter made in Moscow – this one looked much like the scepters of the Rurikids. But in 1762, Leopold Pfisterer, an Austrian jeweler under Russian service, made an Imperial Scepter for Catherine II, which has been used in coronations ever since.

The cross upon the 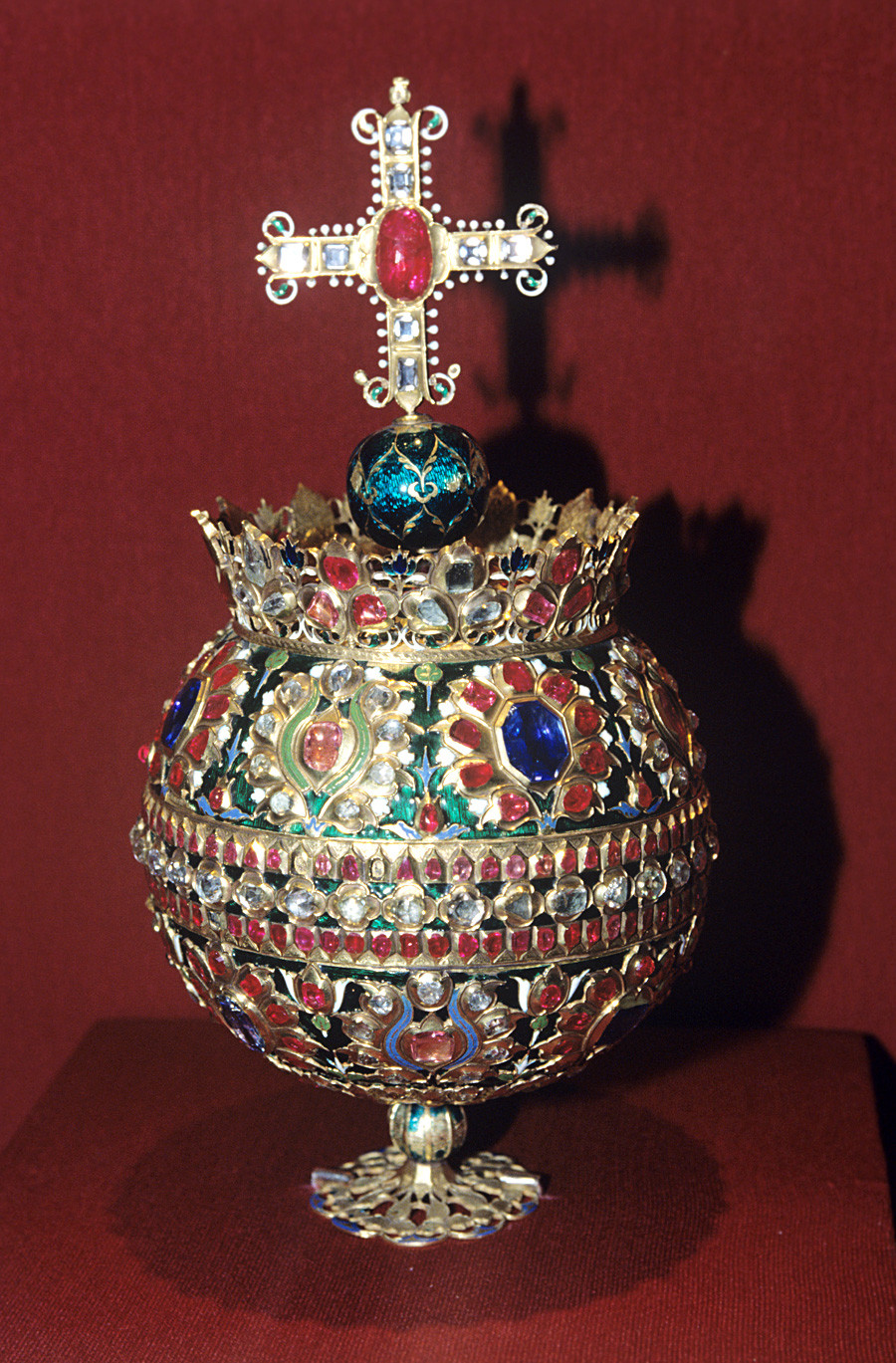 orb, or, to put it more precisely, the globus cruciger (Latin for "cross-bearing orb") is also a piece of royal regalia, and it symbolizes the monarch’s spiritual and religious power over the world. Like the rod (scepter), the orb also came from the Roman Empire. The plain sphere held by the god Jupiter represented the world, or the universe, while the metal sphere (orb) held by the Emperor represented his dominion. 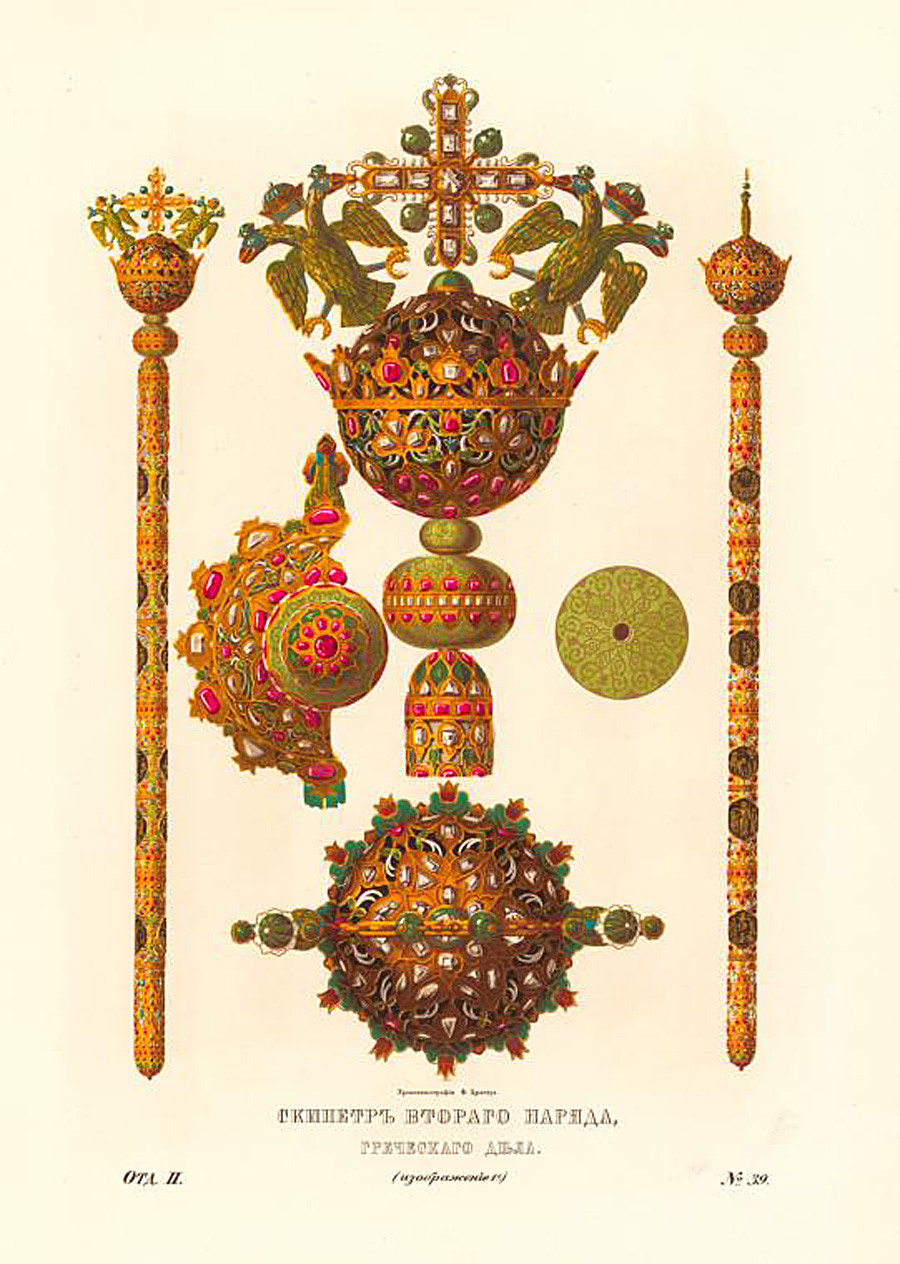 With the development of Christianity, the orb was topped with a cross. The Emperor held the orb (the world) in his hand, to show he ruled it on God's behalf. Just like the scepter, the use of the orb was adopted from Constantinople by the Russian tsars 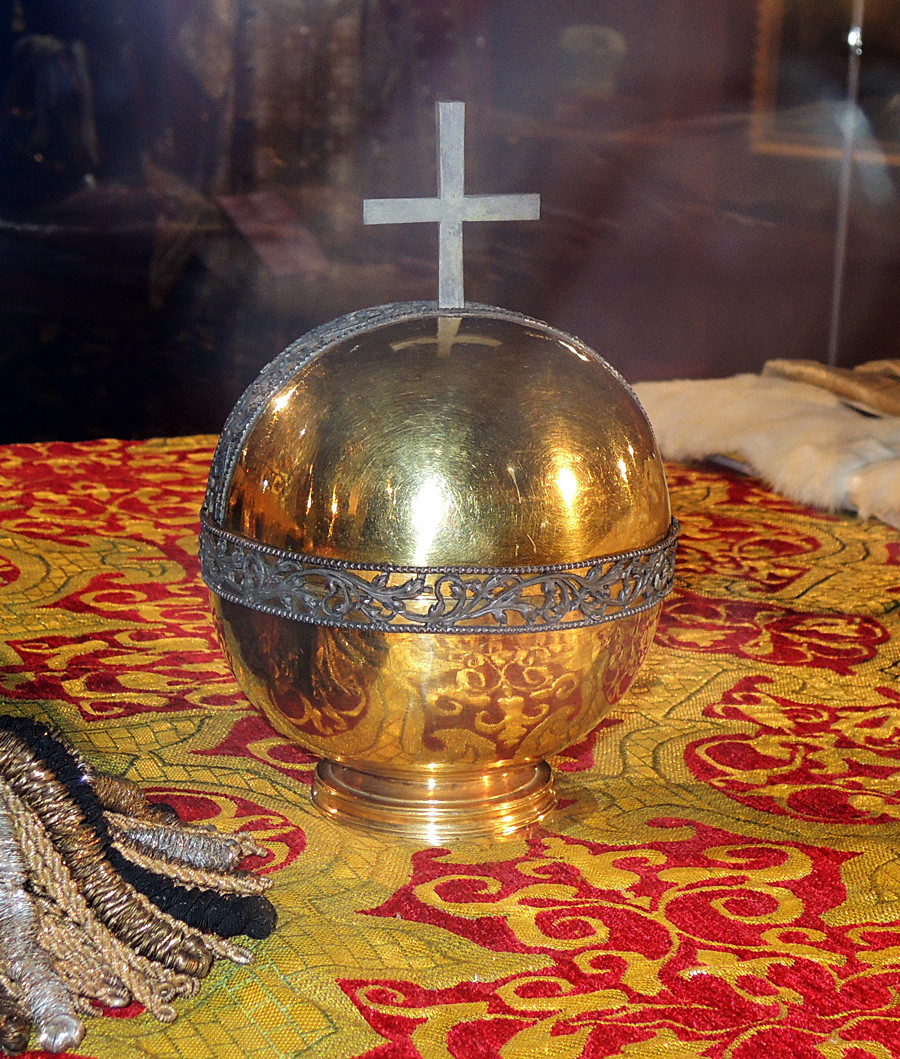 The orb of Peter II

are four Russian orbs. The first one was used by the first Romanov, Mikhail I of Russia – this one came with the scepter from Rudolf II. It features scenes from the life of the Biblical King David. The Greek orb, which came from Istanbul in 1662 together with a scepter, was used by Alexis of Russia. An orb was also made for Peter II of Russia – and it was quite small because, in 1727, the monarch was just a 12-year boy. 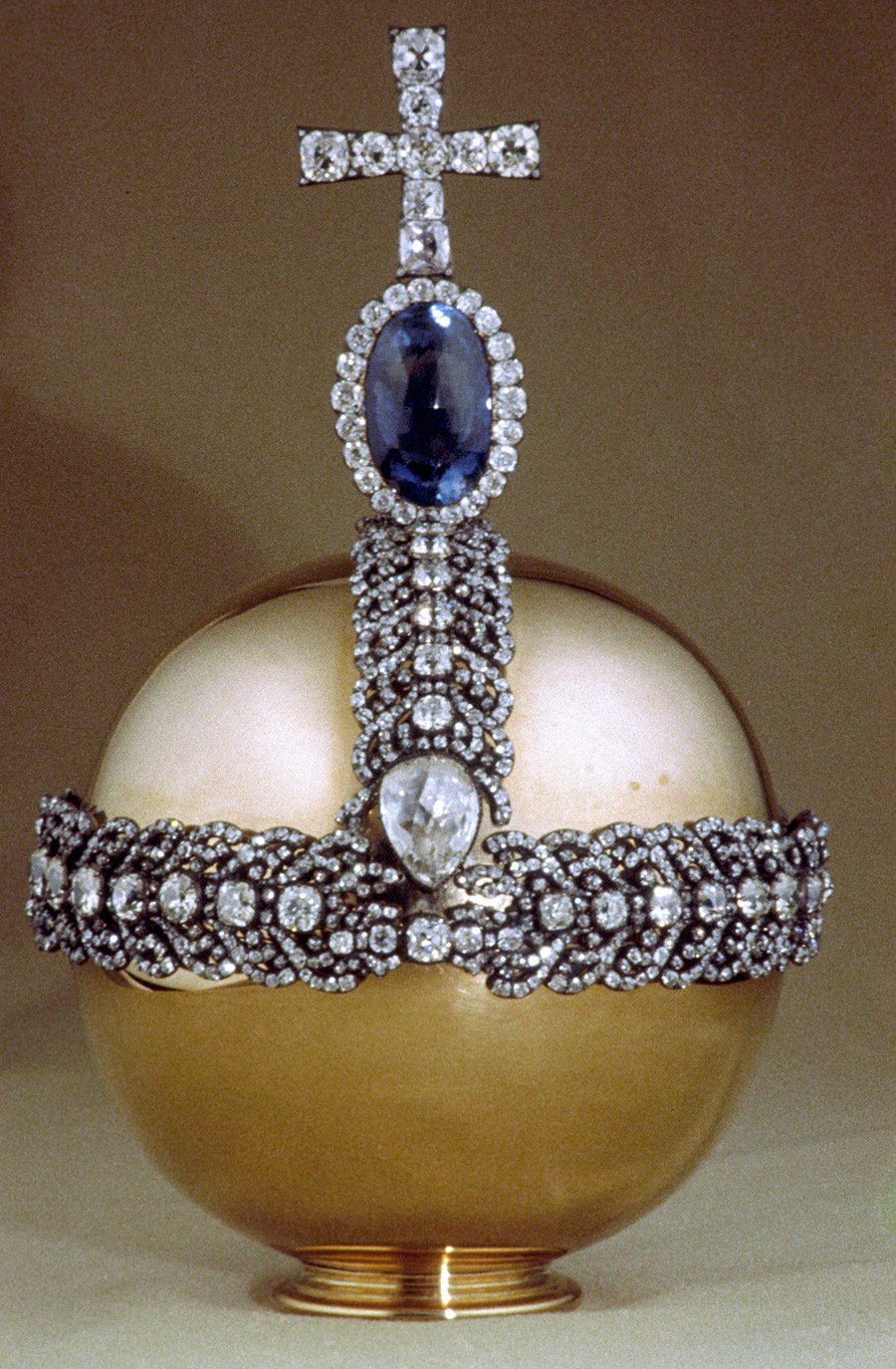 Finally, the Imperial Orb, which is 24 cm high and 48 cm in diameter, was made for Catherine II by the court jeweler Georg Friedrich Eckart. It is a smoothly polished golden globe, surrounded by diamond belts 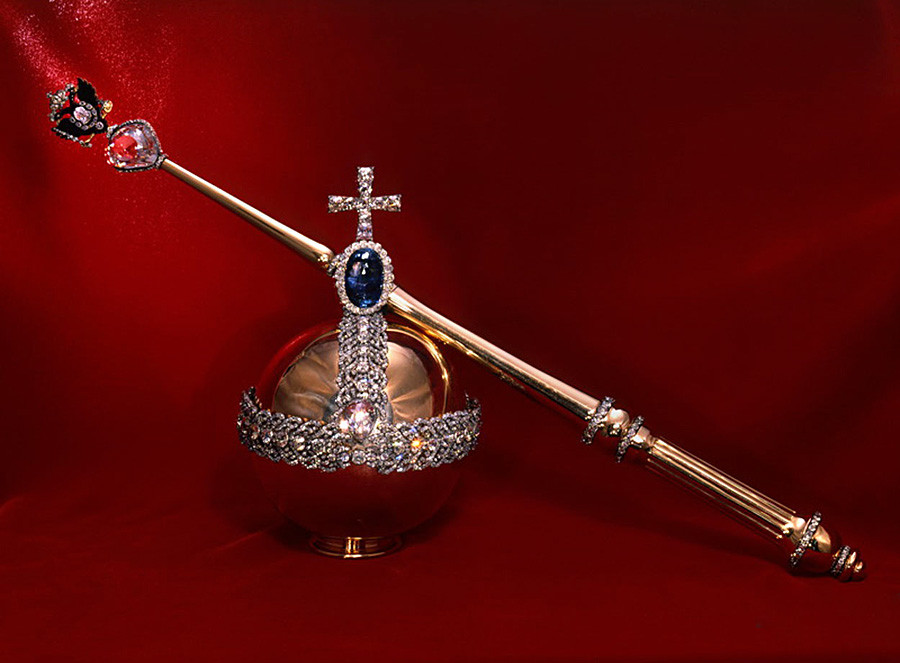 the reign of Paul I of Russia, the orb was decorated with a Ceylon sapphire weighing 195 carats. A total of 465 grams of gold, 305 grams of silver, and 1370 diamonds were also used to make the orb.