Why did the Soviets celebrate the October Revolution while Moscow was falling into Nazi hands? 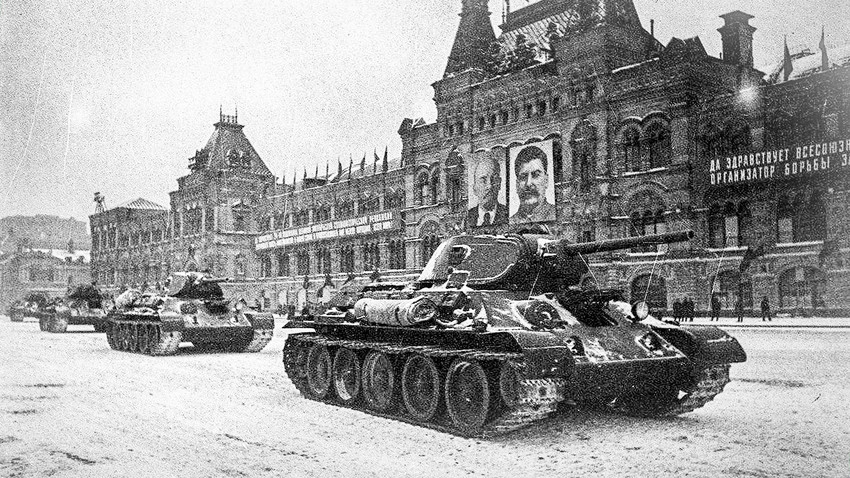 Public domain
Thousands of Soviet soldiers took part in the 1941 October Revolution Parade in Moscow. From Red Square, they immediately marched straight to the battlefield to stop the Nazis, who already were a stone’s throw away from the Kremlin.

This was probably one of the most unusual parades Moscow had ever seen. On November 7, 1941, soldiers marched on Red Square to commemorate the 24th anniversary of the 1917 Bolshevik Revolution, and immediately moved to the frontline to fight the Nazis, who were just 30 km from the city center.

The annual parade honoring the revolution was seen as the most important in the USSR. In mid-October 1941, however, few believed that such a parade was possible that year. The city was on the brink of catastrophe: German troops had broken through the Soviet defenses and appeared on the outskirts of Moscow. The evacuation of industrial and administrative facilities was underway, and what couldn’t be moved was mined. 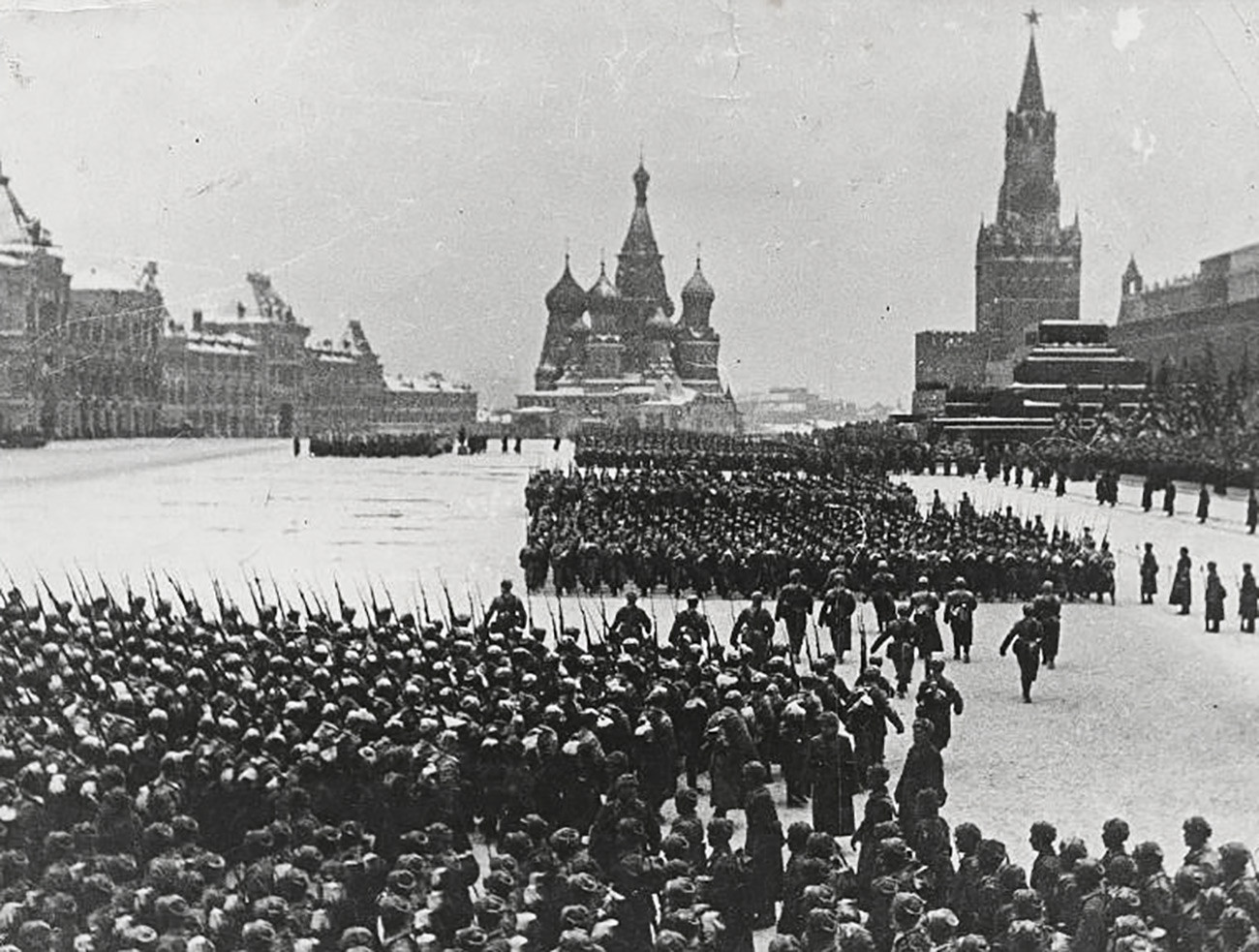 The transport system was paralyzed. The city was gripped by looting, robberies and fires. Panicked citizens fled Moscow with everything they could carry. To stop the chaos, on Oct. 20 the Soviet leadership decreed a state of siege. A curfew was imposed, and the city was taken under control by NKVD (interior ministry) troops, who more or less stabilized the situation. 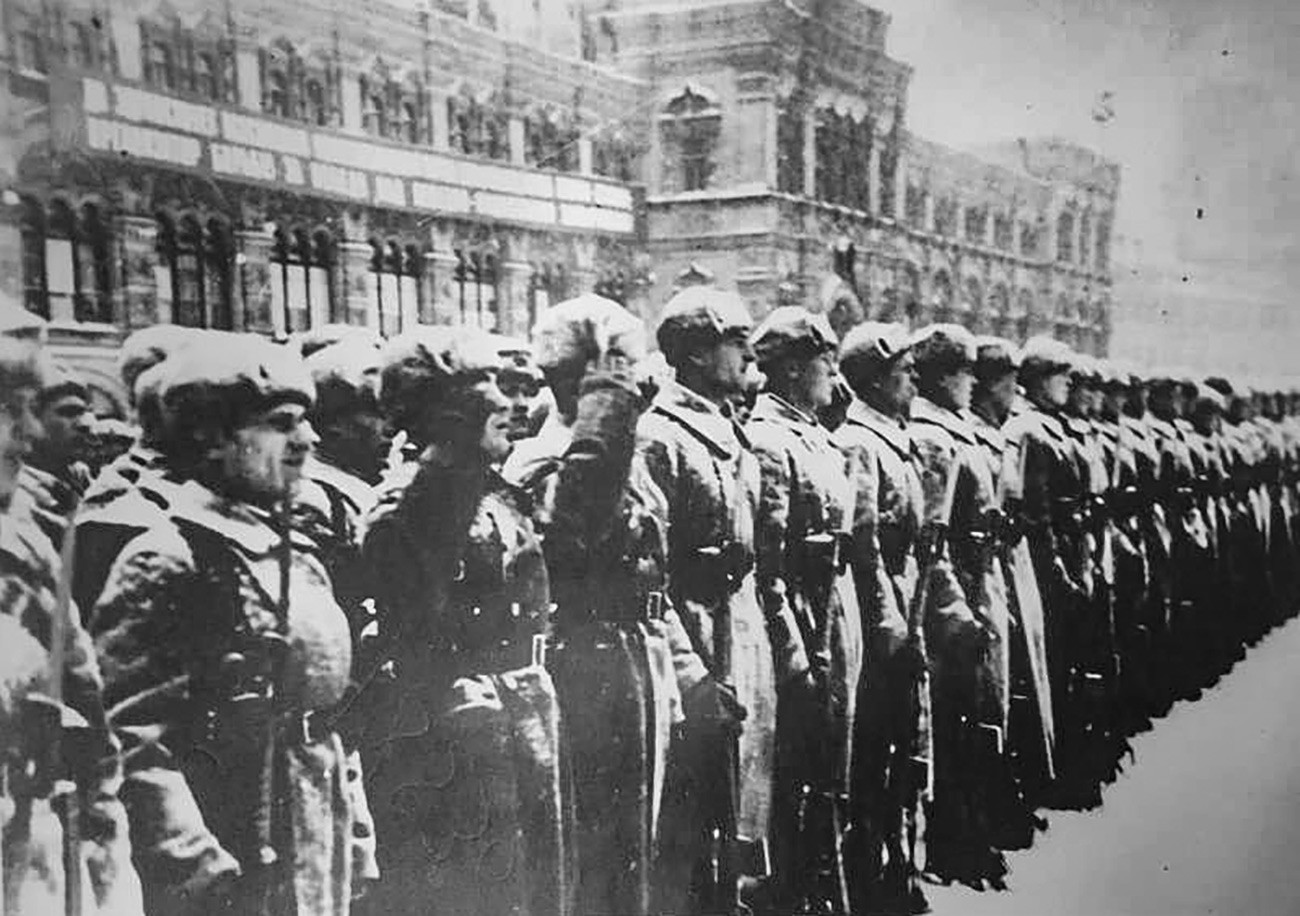 But strict measures were not enough, Muscovites needed something inspiring. It was then that the Soviet leadership decided to hold the Revolution Parade in order to demonstrate to Moscow, the USSR and the whole world that the Soviets still could and would fight. 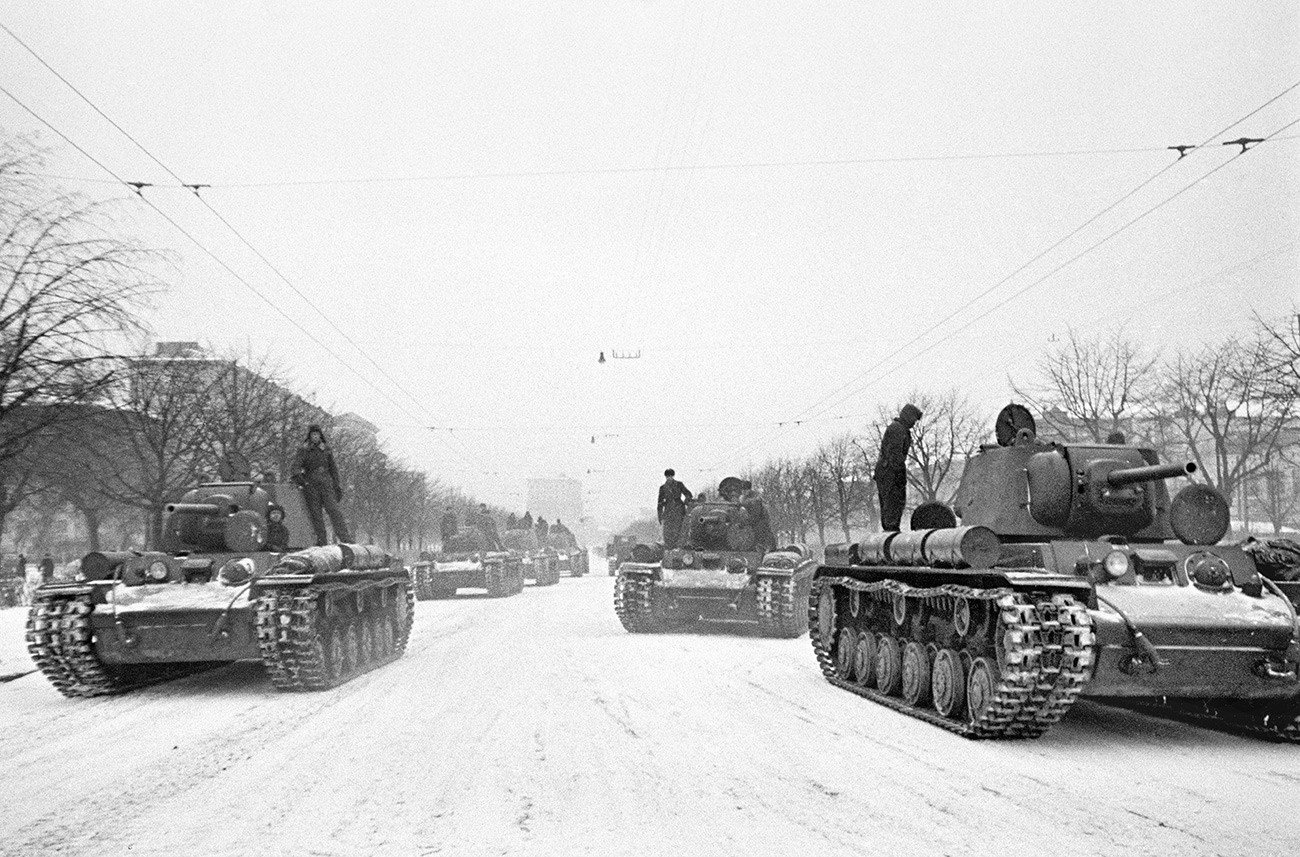 The first task was to secure Red Square from Luftwaffe raids on parade day. On Nov. 5, the Soviet Air Force began preventive strikes on German airfields. 550 fighters were commandeered from other frontlines, and anti-air troops were put on the highest alert. Thanks to these measures and a strong snowfall, no enemy plane reached the center of Moscow on Nov. 7. 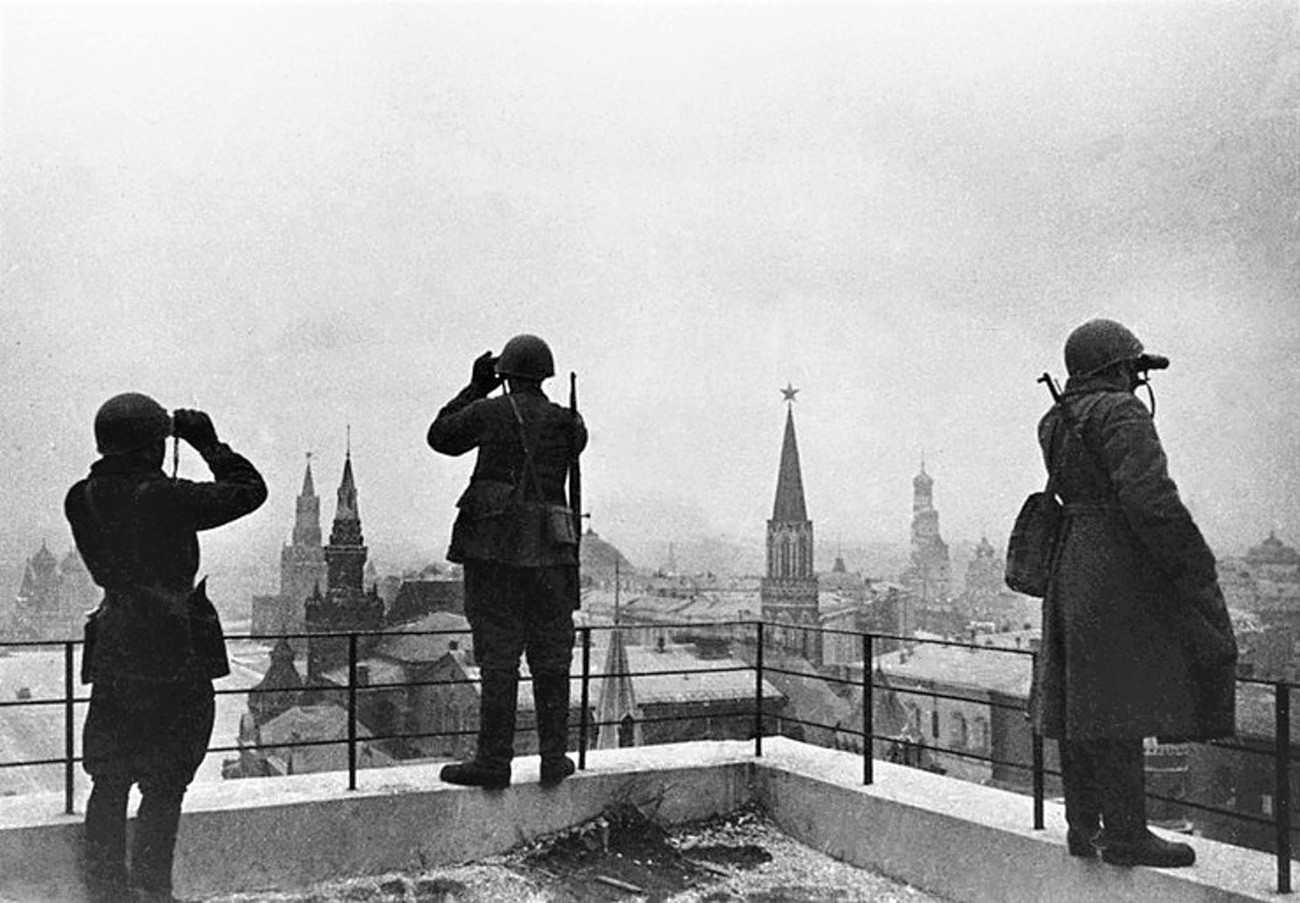 The Soviet leadership undertook some unprecedented steps: the camouflage was removed from the Kremlin stars (which were temporarily lit up again) as well as from Lenin's Mausoleum. There on the tribune stood those Soviet leaders who had remained in the capital, including Stalin, who made a solemn speech. 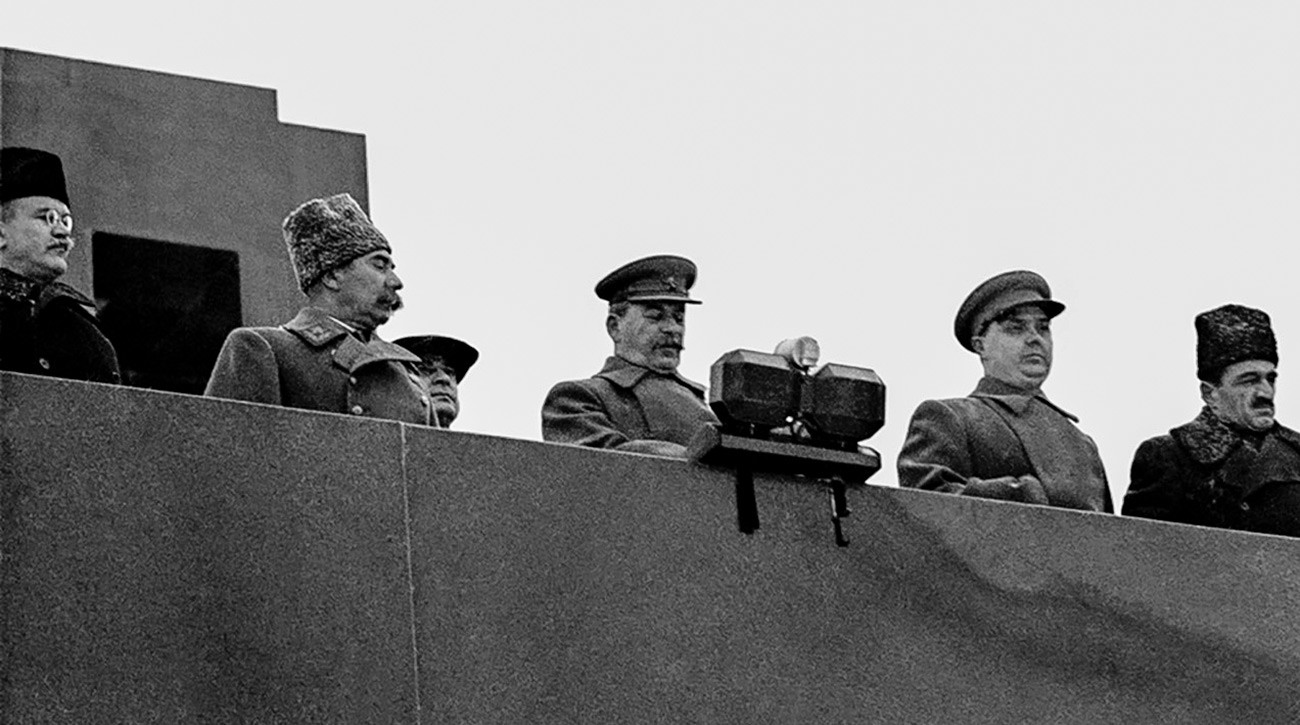 At the same time, most of the country’s leadership, along with foreign diplomats, were at a similar parade in Kuybyshev (now Samara), a city on the Volga 1,000 km from Moscow, not far from Kazakhstan. This city was lined up as the temporary Soviet capital in case the real one fell. 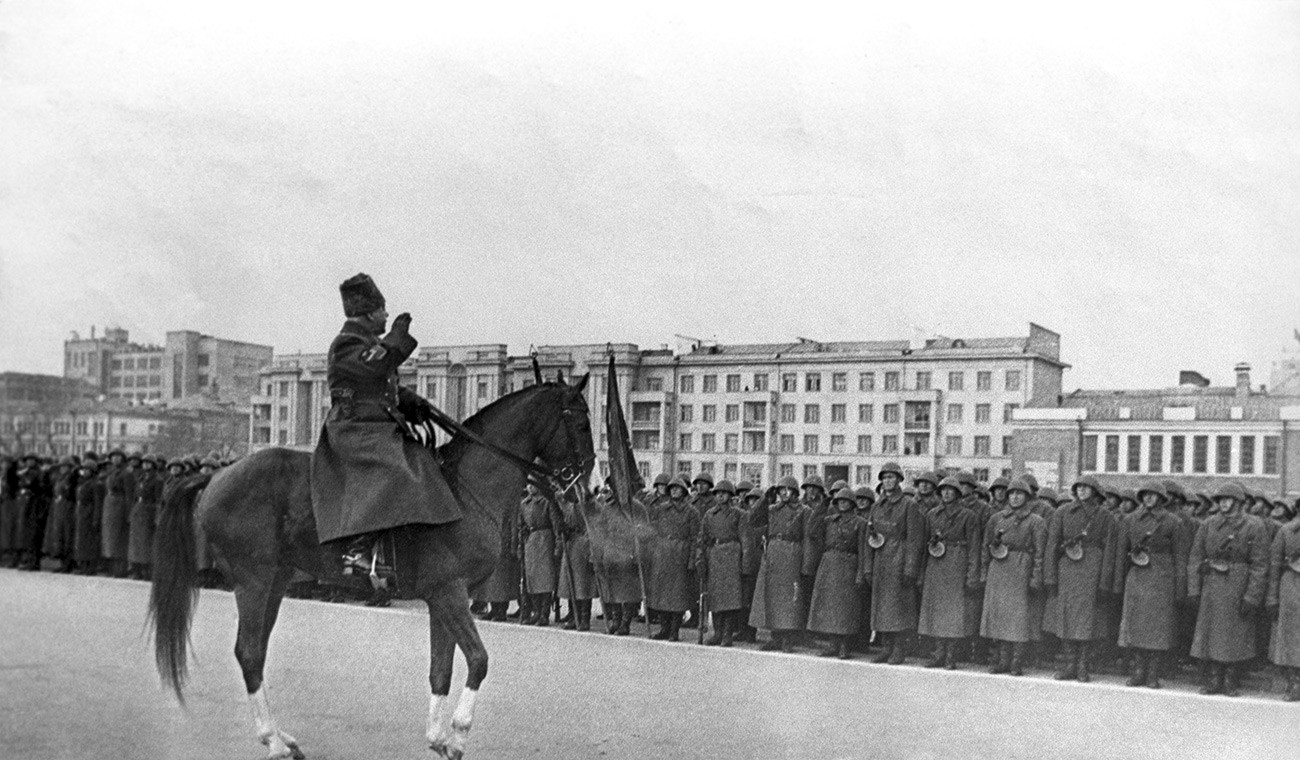 28,500 soldiers took part in the Moscow Parade: most of them were military cadets and rifle, cavalry, artillery and tank units of the Moscow Garrison and Reserve of the Supreme High Command. Along with the soldiers, 140 artillery guns, 160 tanks and 232 vehicles participated. Due to the snowfall, the aviation display was cancelled. 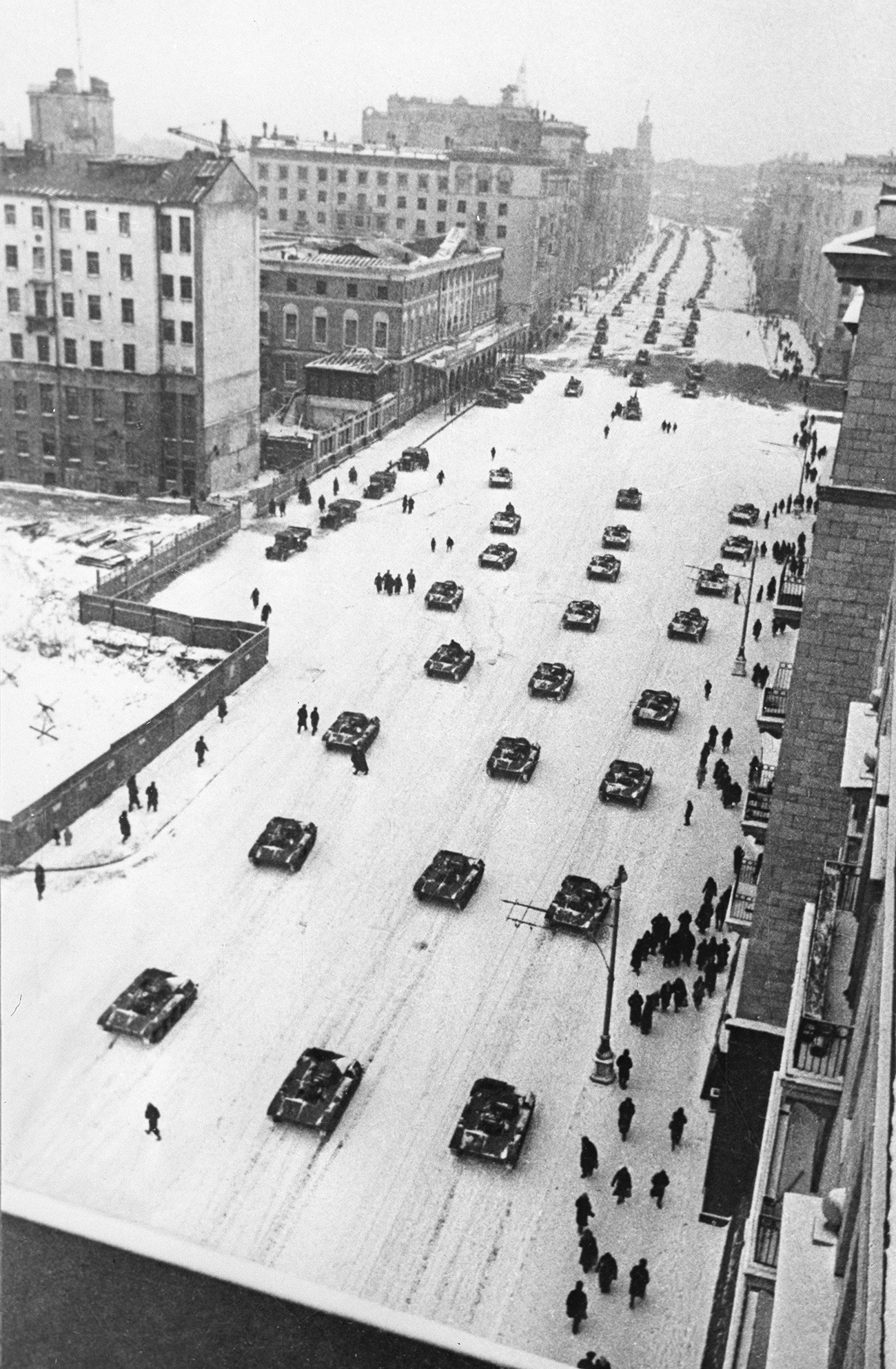 Usually, it took 2-3 months for the troops to prepare for the parade on Red Square. But in 1941, they had just several days. After the parade, the soldiers relocated directly to the frontline to confront the perilous danger. 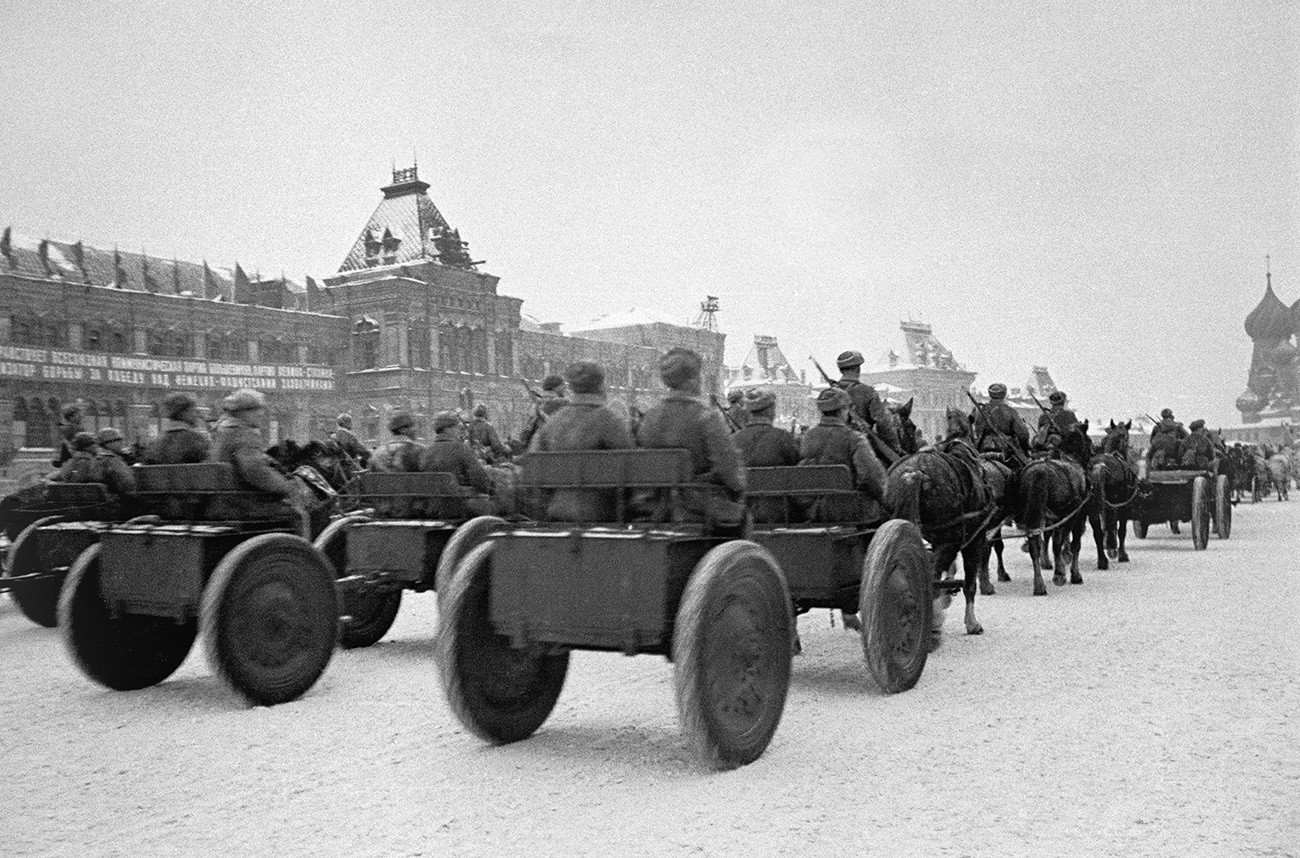 The parade was widely covered by Soviet and foreign journalists still in Moscow. Veteran Sergey Kolodin recalled: “I listened to the parade at home in Kalinin (now Tver). It really inspired us young people very much. I was 17 then, and I went off to the battlefront.” 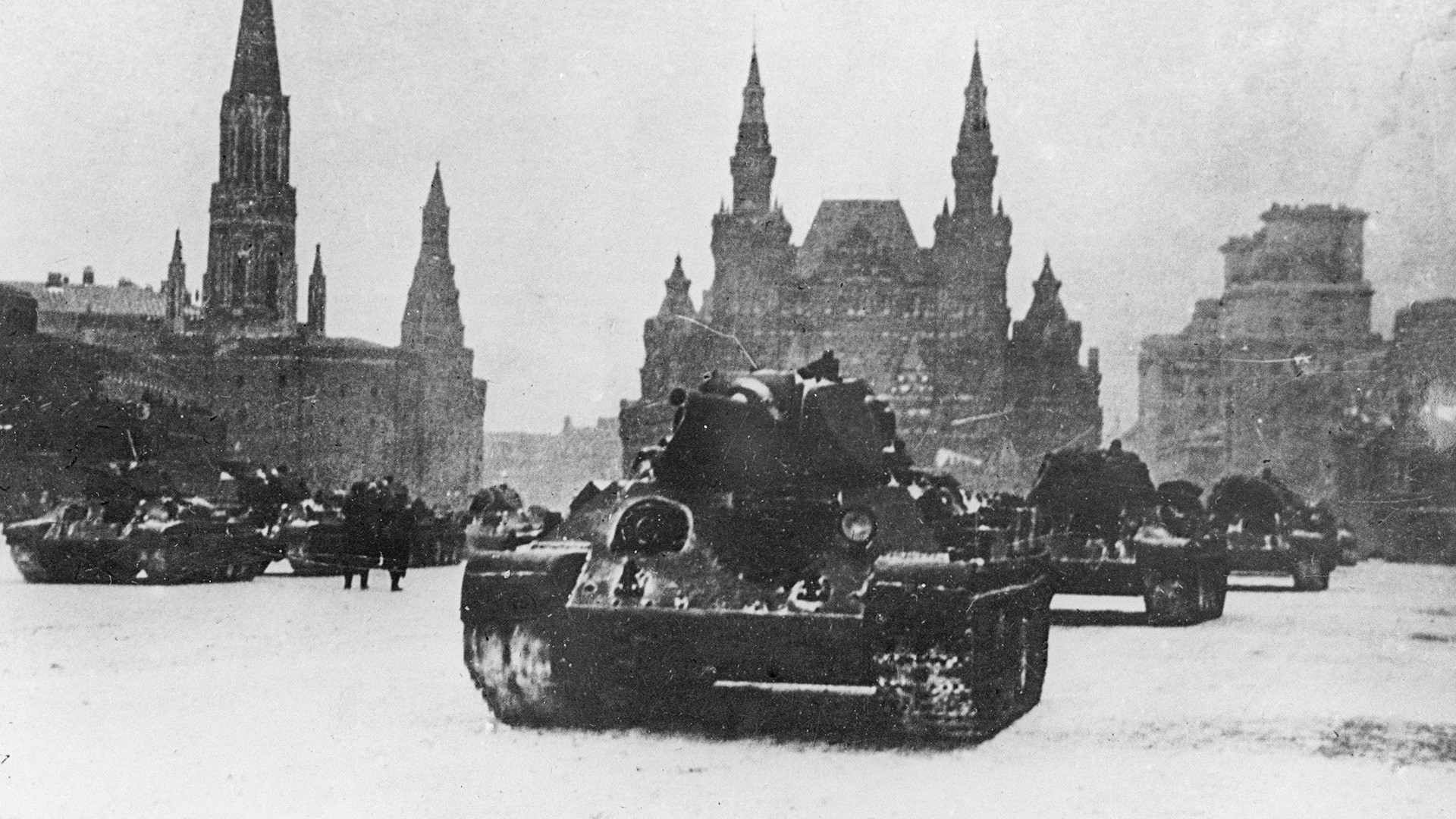 After 1941, Moscow didn’t see any parades until the very end of the war. The next time Soviet soldiers marched on Red Square came only on 24 June, 1945, to celebrate victory over Nazism. 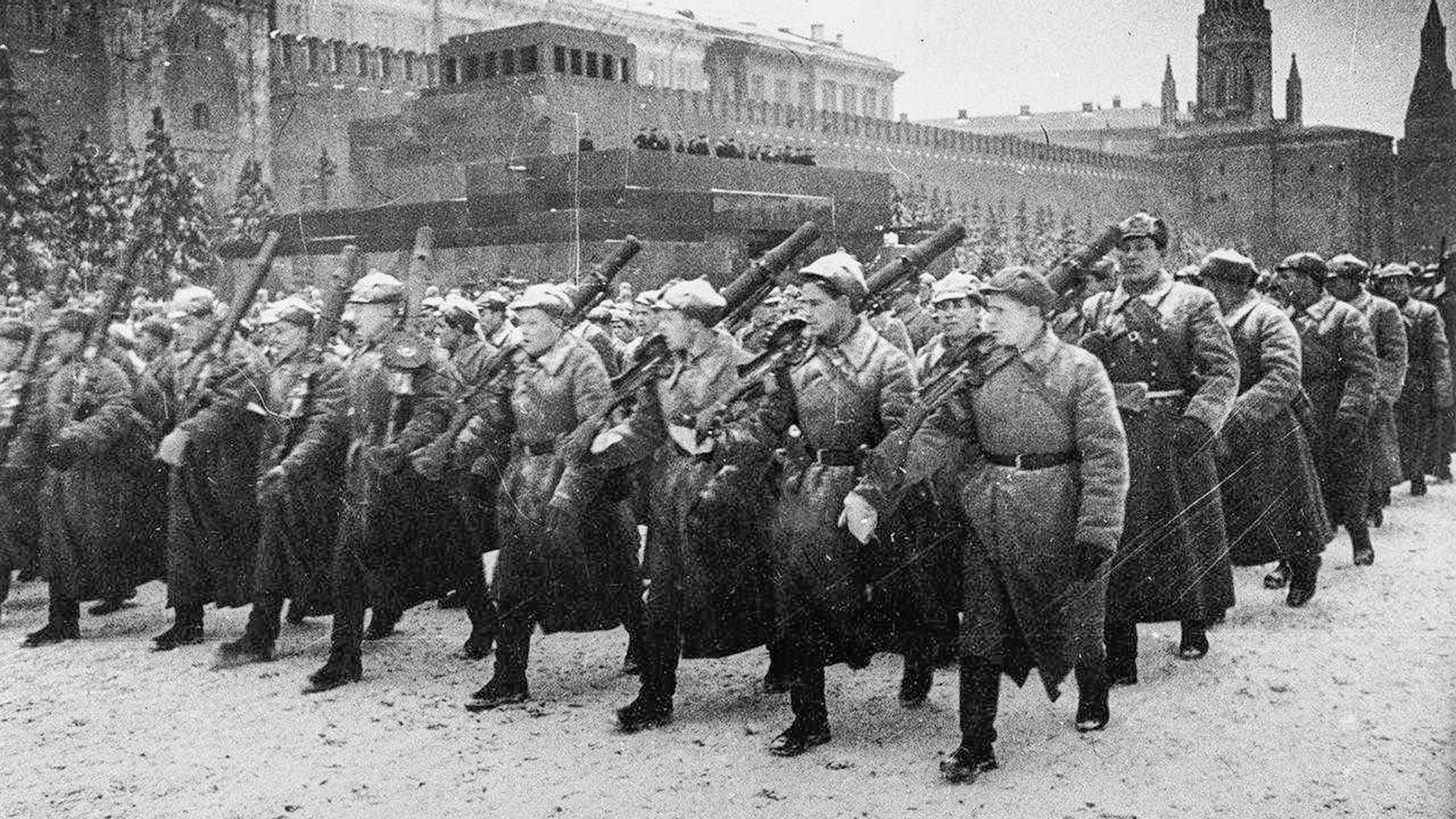