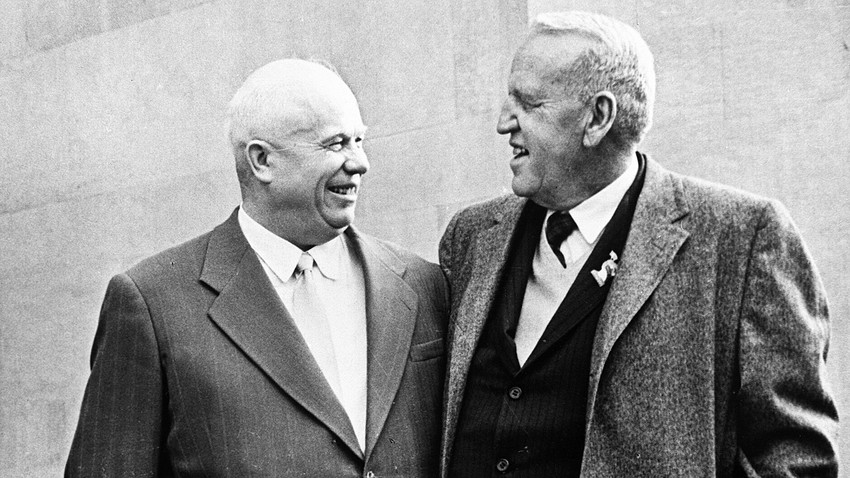 V. Lebedev/Sputnik
In U.S. farmer Roswell Garst Soviet leader Nikita Khrushchev found a true soul mate. With Garst, he could talk not only about his passion — agriculture, but also politics.

It all started with corn. In the mid-1950s, Nikita Khrushchev decided to sow it across the whole USSR. According to his plan, corn would become a “second bread” and kill two problems of Soviet agriculture with one tasty stone: lack of grain and lack of livestock feed.

Khrushchev saw that corn was the main feeding crop in the U.S, and that the rapid development of the livestock sector had brought about an increase in its production. Plus there was his experience of growing up in warm “black-soil” (i.e. fertile) Ukraine, and its terrible struggle with famine (Khrushchev was First Secretary of the Central Committee of the Communist Party of Ukraine, effectively head of the region). This made him view the crop through rose-tinted lenses as a panacea for Soviet agriculture.

However, his “corn campaign” failed to take into account that many regions of Russia had poor soil and unpredictable yields. Nevertheless, in those days the general secretary’s word was law — criticism was only for the brave and/or foolhardy. 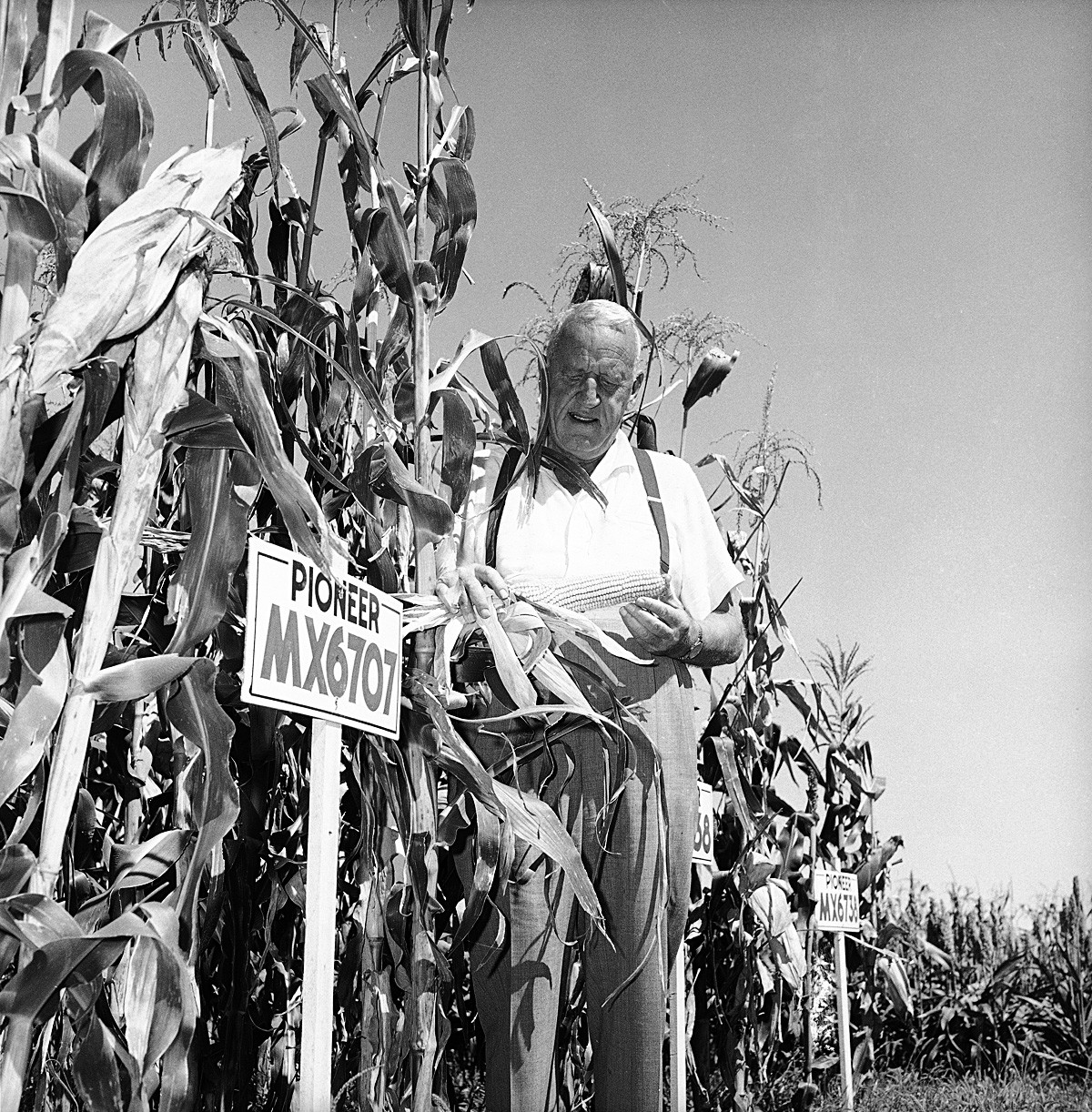 Khrushchev-inspired “corn fever” duly swept the entire country. The crop was eulogized on TV, written about in newspapers, and even featured in children’s cartoons. The country’s traditional agricultural system was overhauled. Vast areas where oats, rye, and wheat had previously been grown were given over to corn. However, the crops were generally a sorry sight and left much to be desired.

It was to the Americans — the corn experts — that Khrushchev turned to for assistance to fill the gaps in Soviet knowhow. “They grow it much more successfully than we do, which is why you don’t see people lining up for meat,” lamented the Soviet leader.

In 1955, a Soviet delegation visited the Iowa state inspectorate, scrupulously studying the methods of local farms in an attempt to unlock the secret of the U.S. success. At the end of the trip, a group of farmers were invited to visit the Soviet Union.

“The farmers from Iowa received the invitation to pay a return visit to the USSR unenthusiastically — cold, distant, hostile Russia did not appeal to them,” writes the son of the Soviet leader, Sergei Khrushchev, in his book Nikita Khrushchev. Reformer. Moreover, there was no commercial benefit to be gained from the trip, since the State Department banned trade with the USSR. 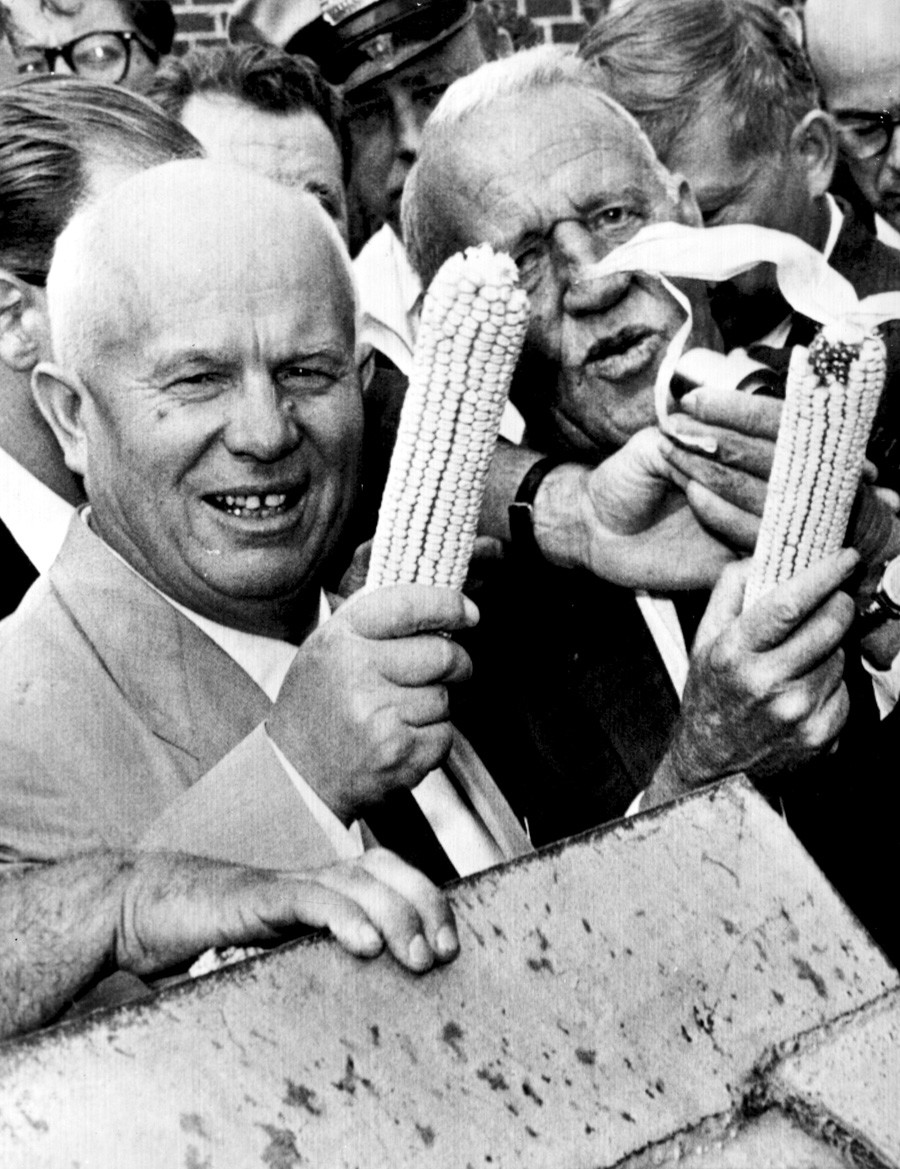 Nevertheless, one farmer heeded the call. In 1955, Roswell Garst went to the Soviet Union with his wife. Besides farming, Garst was an expert in corn selection, and he traded seeds throughout Iowa. For the Soviet Union, he was a godsend.

The beginning of a beautiful friendship

Garst visited the All-Union Agricultural Exhibition in Moscow (today’s VDNKh) and traveled around the country, inspecting and studying collective farms. During his travels, the straight-talking farmer openly spoke his mind about the (lack of) effectiveness of Soviet agriculture.

When the media tour was over, he was invited to the Crimea to meet with Khrushchev. And it was there that the two struck up a long-standing friendship. “My father and Garst liked each other — they were two souls who cherished the soil and were able to spend hours discussing corn, soya, and beans,” writes Sergei Khrushchev.

During their heart-to-hearts, the American again did not hesitate to bluntly air his thoughts. “Soviet agriculture is 15 years behind the needs of the growing Soviet population, while American farmers are 15 years ahead of their country’s needs,” he said. 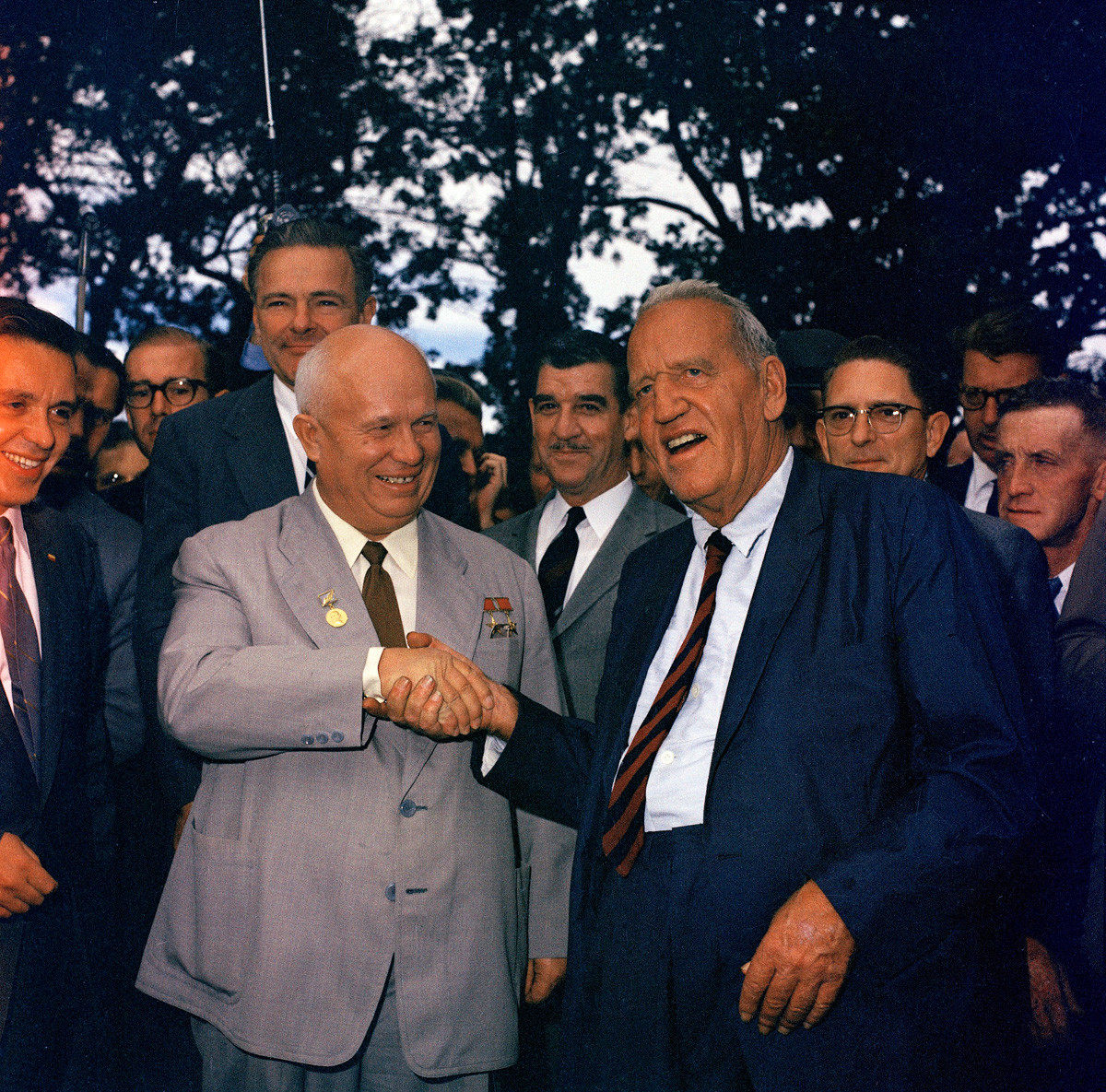 Roswell Garst was genuinely surprised by Khrushchev’s near total ignorance of the latest developments in the agricultural sector: “How come you know so little about our agriculture? You, Mr Khrushchev, seem to be living under a rock. Everything I’m telling you about is regularly published in our agricultural bulletin and you can easily buy or subscribe to it. Your intelligence easily got hold of our atomic secrets, and they were kept under lock and key. But in this case you don’t need to do anything.”

In the end, Khrushchev agreed to buy from Garst hybrid corn seeds, and in gold at that. The only snag was the U.S. ban on trade with the Soviets.

The U.S. Department of State deeply opposed the establishment of trade relations and the transfer of agricultural technologies. As a result, Garst was refused an export license.

However, the stubborn farmer was not about to give up without a fight. He even contacted the New York Times. The newspaper wrote that Americans like to imagine that the problem is the Soviet Union, when in fact it is the U.S that is holding back trade. If Garst did not get a license, it promised to print a new article under the heading “Whose Iron Curtain Is This?”

In the end, Roswell simply wore down the State Department, says his granddaughter Liz Garst. “We’re sick of you. Go away. In any case, it’ll be a failure. Goodbye," officials told him when finally issuing a license.

As noted by Sergei Khrushchev, “the export license with no time limit punched the first major hole in the Iron Curtain, and paved the way for the establishment of trade relations between the USSR and the U.S. The precedent was a great thing. Any future refusals to issue an export license would be met with the retort: ‘Why can Garst do it, but not us? It’s discrimination.’ The State Department was keen to avoid accusations of discrimination, and so issued licenses against its will — one, two, three, before losing count.” 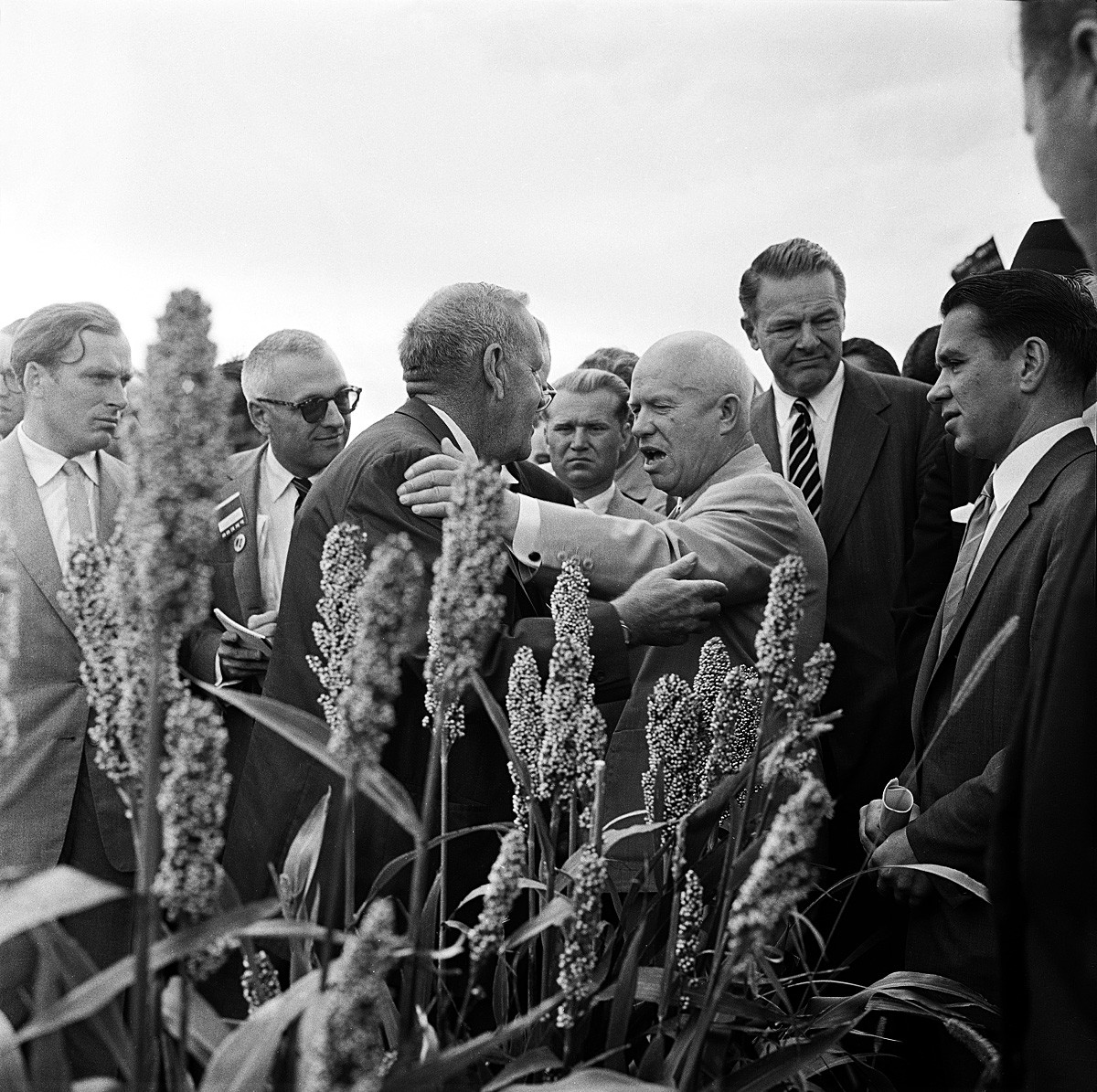 Shooting from the hip

The Soviet leader and the American farmer were very comfortable in each other’s company because they were alike: rural, rather coarse, lacking sophisticated manners, says Liz Garst.

“I think they could tell it to each other straight without either taking offence. They could be frank with each other, with no bitterness. They both liked to discuss ideas, tell stories, and laugh,” she says. What’s more, their conversations went well beyond the cultivation of corn, and touched upon topics as hot as the siting of U.S. missiles in Turkey.

Roswell Garst visited the USSR, Hungary, and Bulgaria more than 60 times in all. After each trip he was duly summoned for debriefing by the FBI. He openly stated to his hosts: “We’ll be interrogated by the FBI when we get back. And we won’t lie. So keep in mind, don’t tell us anything you don’t want the FBI to know.”

Garst traveled all over the vast Soviet lands. He was not shy to criticize collective farmers if he saw them doing something wrong. “The American capitalist cares more about our harvest than the collective farmers themselves,” Khrushchev commented wistfully. He himself paid the farmer a return visit in 1959 during his first visit to the U.S. 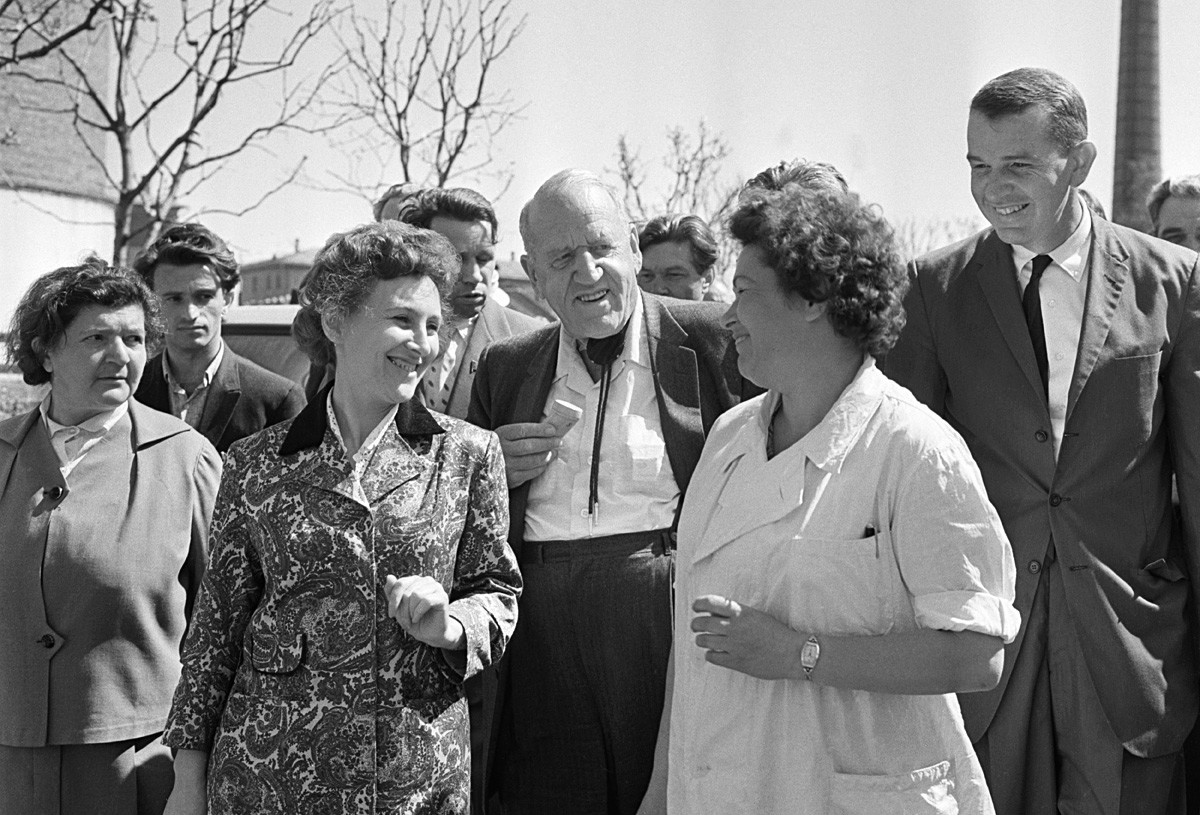 Despite all these efforts, the corn campaign ultimately failed. The seeds from warm Iowa did not take root in cold Siberia, and corn could not replace traditional rye and wheat. With Khrushchev’s departure in 1964, the Soviet cornfields fell fallow.

Nevertheless, Khrushchev and Garst maintained their close friendship until the end of their lives, regularly congratulating each other on national holidays. As noted wryly by Liz, Khrushchev wrote far more letters to her grandfather than to President Dwight Eisenhower.