How Khrushchev bashed Stalin and his heritage 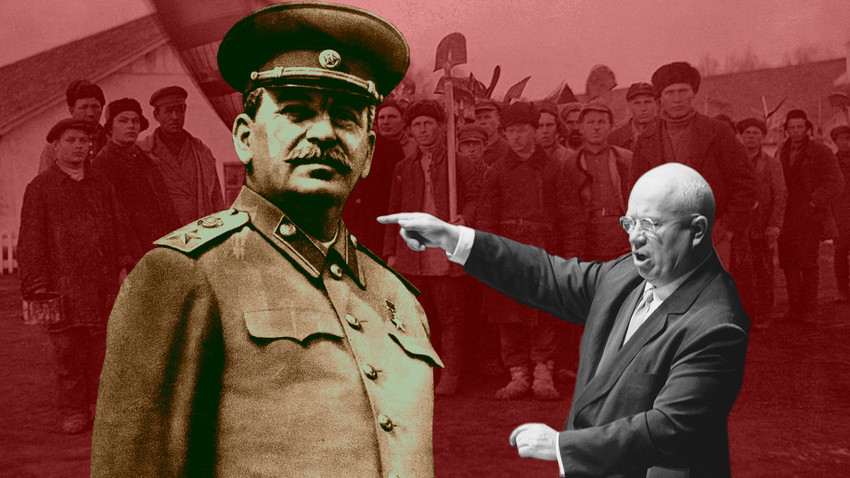 After the demise of the almighty leader, his former henchmen told the truth about his dark legacy.

Global Look Press; AP; russiainphoto.ru
A loyal henchman of Joseph Stalin’s while he was alive, Nikita Khrushchev went against him after the fearsome leader died.

“The death of Stalin on March 5, 1953, caused the only possible reaction among the Soviet elite – joy,” says Prof. Rudolf Pikhoya, a historian at the Russian Academy of Sciences. Their joy comes as no surprise, taking into consideration Stalin’s habit of renewing the state apparatus through severe repressions.

One day you could belong to Stalin’s inner circle and the next day you are facing the firing squad. There were signs that Stalin was just about to carry out a new round of purges, so there is no wonder his henchmen didn’t grieve for him much. 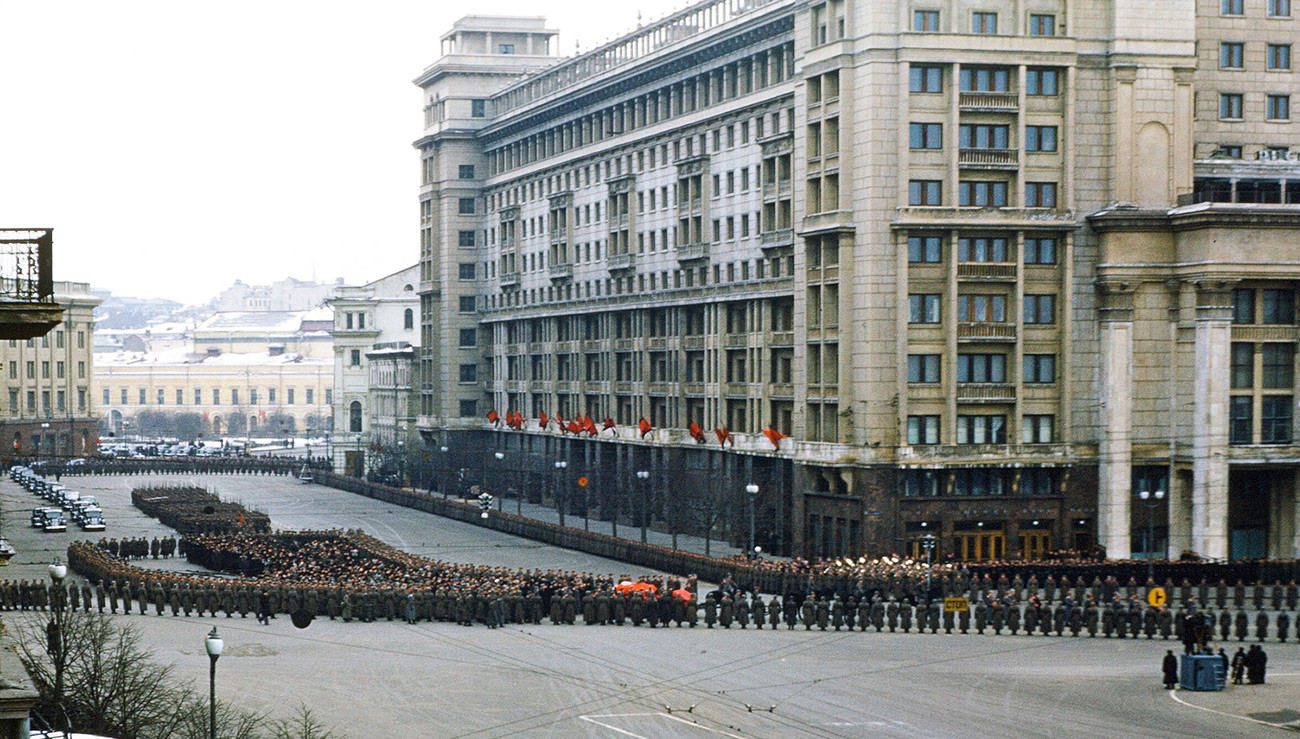 Stalin's funeral procession in the center of Moscow, photographed by a U.S. embassy employee.

By that time, “there were a lot of people in the USSR who sincerely believed Stalin and saw his death as a tragedy,” Pikhoya recalls. Indeed, before his death, Stalin was close to being a living god – with cities and villages named after him, his monuments and quotations all over the USSR. After his demise, Stalin was put in the Mausoleum by Lenin’s side. Whoever was coming next had to deal with Stalin’s heritage, which was very controversial. 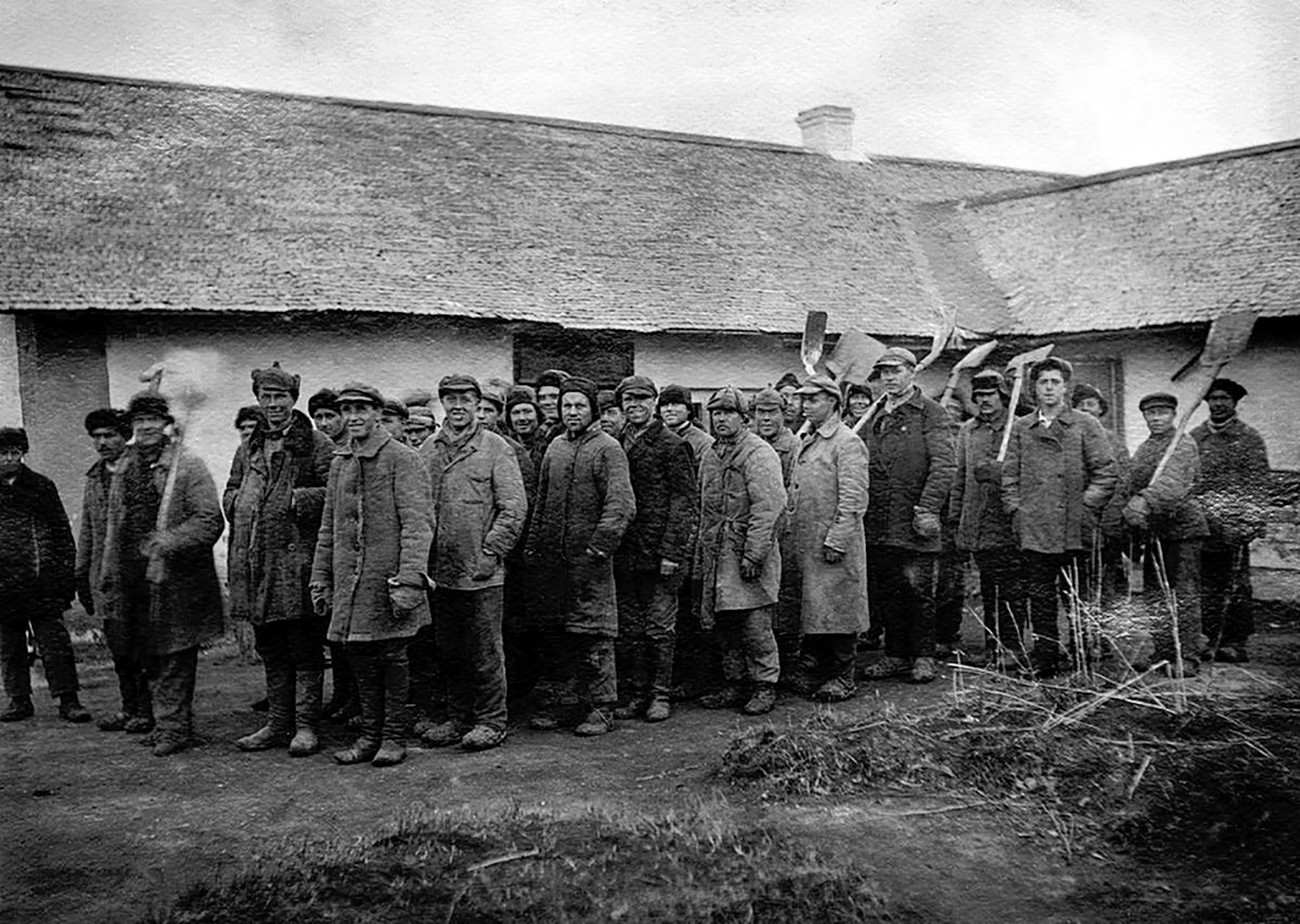 Prisoners in the concentration camp in the Urals.

During Stalin’s reign, more than 780,000 people were executed, and 3.8 million more imprisoned (according to the most conservative estimates), many entirely innocent. Hiding the truth about the repressions wasn’t an option, as people were coming home from the gulag camps and prisons. The party needed to say something out loud.

At first, though, the leaders who took over after Stalin’s death were very cautious, weighing their words carefully. The new leaders, particularly Nikita Khrushchev, who had concentrated power in his hands, were talking about “the personality cult,” but only very vaguely.

“We believe that the personality cult of Comrade Stalin harmed Comrade Stalin himself the most. Comrade Stalin was indeed a towering figure, a genius Marxist. But even such people shall not be allowed to enjoy such power as he had,” Khrushchev cautiously said in 1954. Official speeches and mottoes still mentioned Stalin as a great leader and Lenin’s successor. 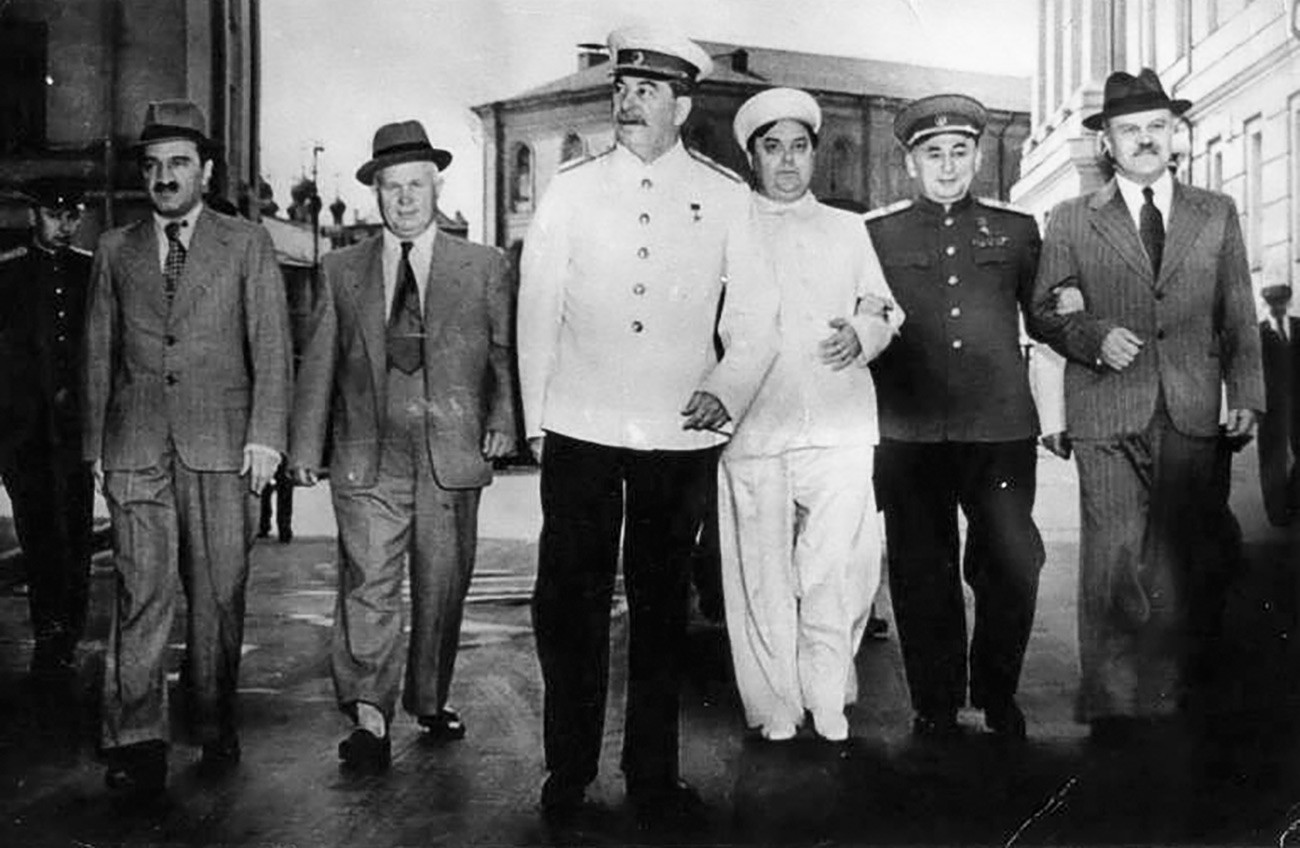 It changed in 1956. The party established a special closed commission to investigate the scale of the 1930s purges. The results were stunning: 1.5 million people arrested in 1937-1938 alone, 680,000 of them shot. Within the higher circles of the party, the leaders disputed one issue: should they make this information public and say who stood behind the repressions?

The 20th Congress of the Communist Party was getting closer – that event, uniting high-ranking party members from all over the country, could be the perfect place to denounce Stalin. The strategy was risky, though – some leaders, among them Stalin’s longtime comrade Vyacheslav Molotov, considered it a mistake that would ruin the party’s authority.

Nevertheless, the majority decided to go for it. Yet another leader, Anastas Mikoyan, explained the decision: “If we don’t do it [reveal the truth about Stalin’s role in the repressions] at the Congress and someone does it later, everyone will have reason to hold us responsible for the crimes committed.” In fact, many of them were responsible for those crimes, having signed countless execution orders during Stalin’s reign. But now they needed to pin all the blame on their dead boss. 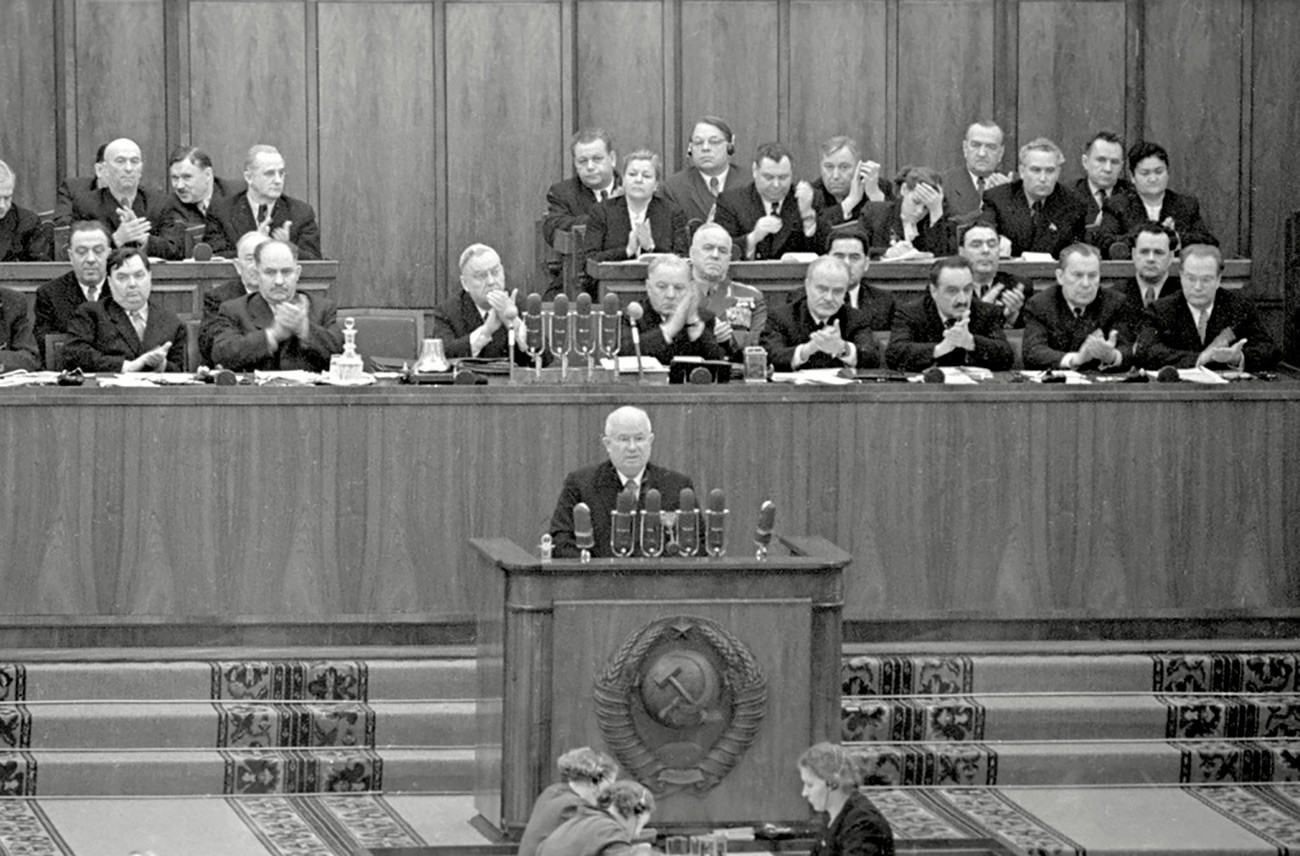 Khrushchev makes a speech at the 20th Congress of the Communist Party of the USSR.

On the very last day of the Congress, February 25, 1956, Khrushchev gave an unscheduled speech, “On the Cult of Personality and its Consequences,” where he hit Stalin’s heritage hard. For the first time in history, several hundred Soviet citizens heard about Stalin orchestrating mass repressions – and it was a shock.

“The speech didn’t mention [the victims of] collectivization… and the terror aimed at the Soviet peoples in general; according to Khrushchev, the main target were people from the party and the army, but they numbered millions, too. Their cases were falsified, the accusations against them were fake, they confessed guilt after torture and were shot for nothing, and Joseph Stalin personally was behind it,” journalist Yuri Saprykin summed up the speech.

Khrushchev remained silent on many topics, not daring to mention his own (or the party leadership’s) responsibility. Still, the speech was a real bolt from the blue. 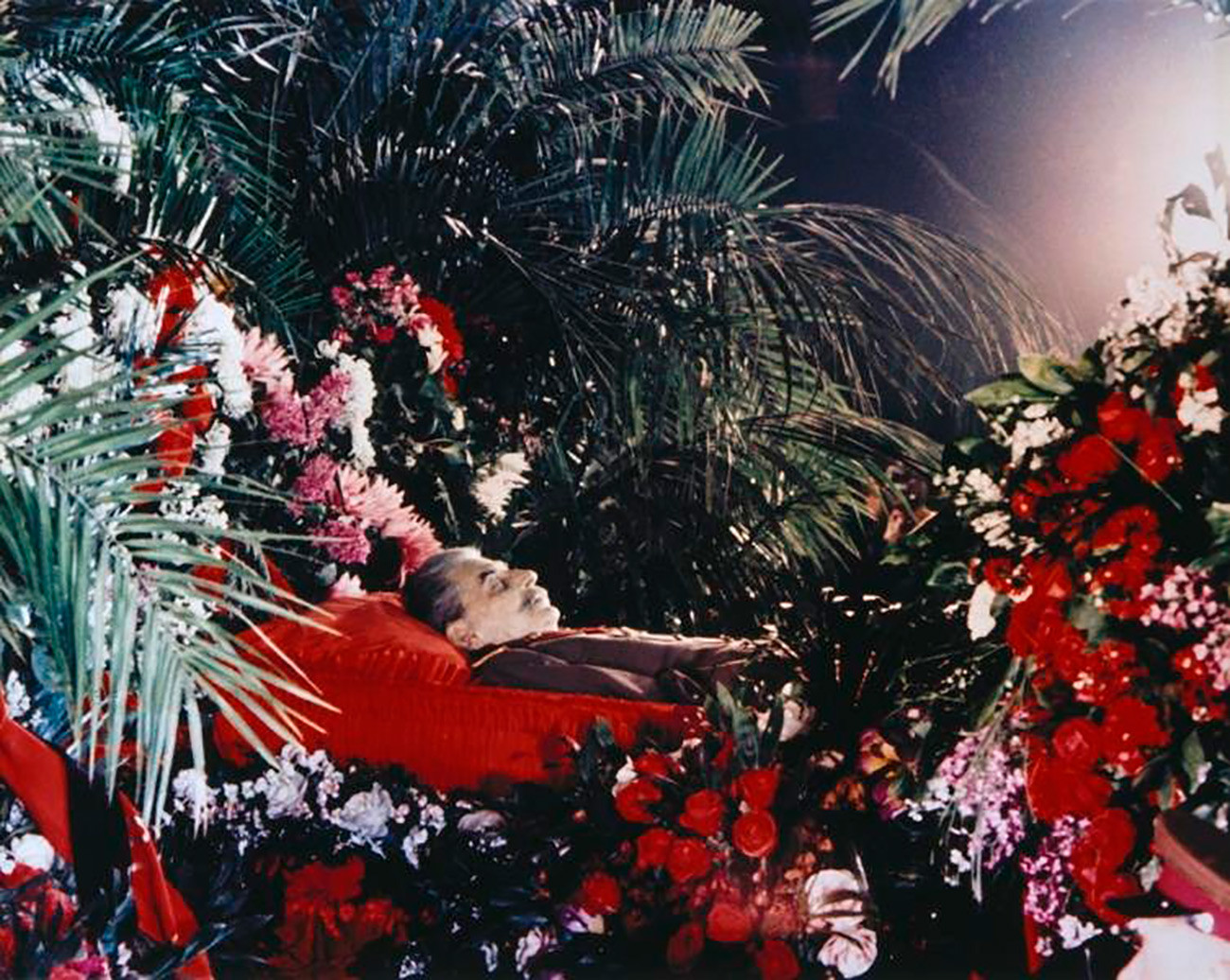 Stalin in the coffin. While he died in 1953 as a person, his death as an ideological figure only became possible after Khrushchev's speech in 1956.

The speech, officially “secret,” very quickly became an object of public discussion, as the delegates to the 20th Congress spread the word across the Union. That shook the world of millions of Soviet people, who had grown up believing in Stalin as a wise and fair leader, and couldn’t even imagine how violent the purges really were.

“We can only welcome the admissions made in the higher circles,” wrote author Igor Dedkov. “But how much grief, how much doubt still lingers in the soul! Decades of vicious power struggles, thousands of people shot and tortured, thousands of souls wiped out – and all of it under the pretext of the most saintly, most humane ideas… Where is the way out?” 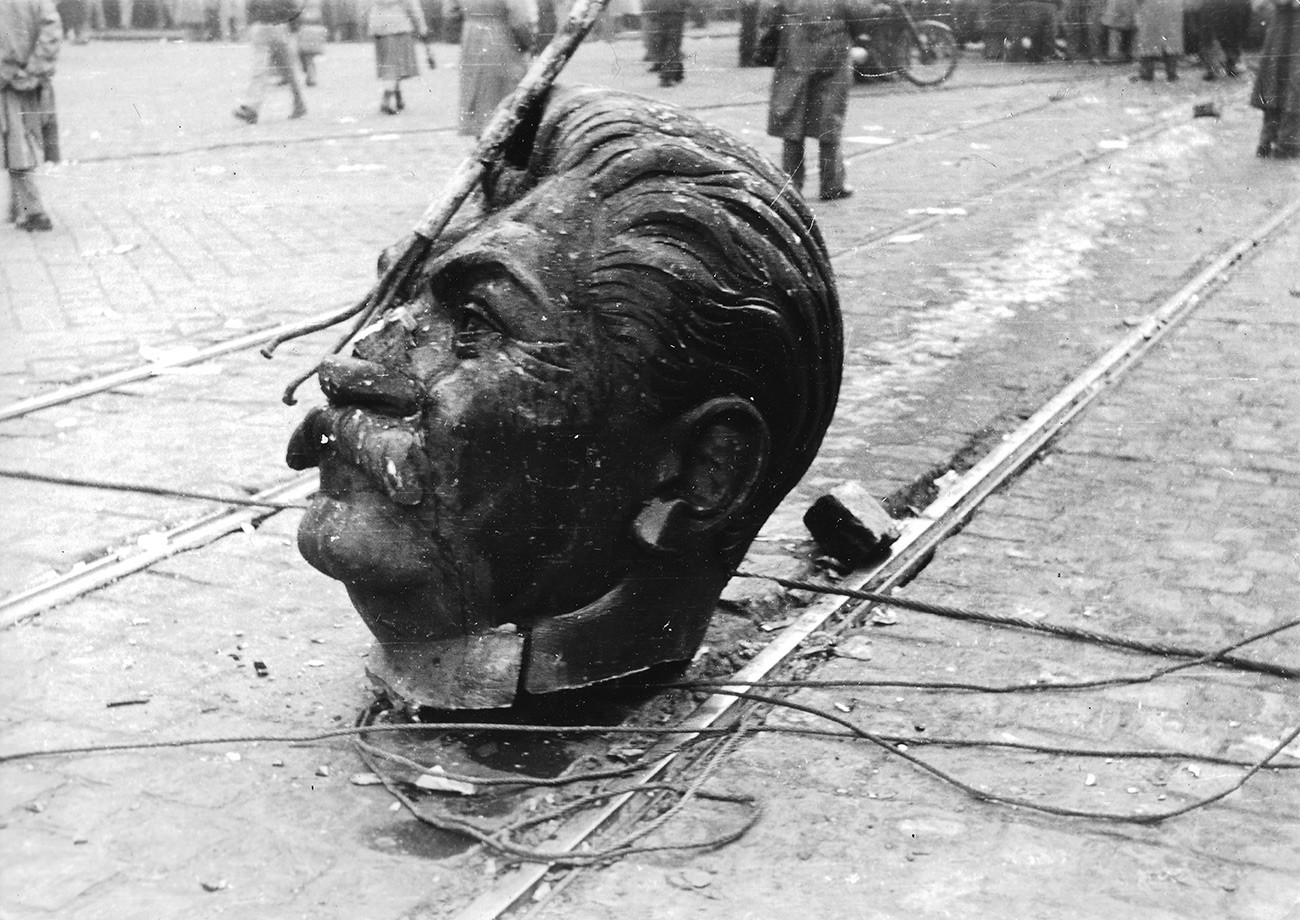 Stalin' s monument being demolished in Budapest, Hungary, in 1956.

Soon afterward, numerous political prisoners of the Stalin era were rehabilitated; his name almost totally disappeared from official speeches and was erased from the Soviet national anthem. Nevertheless, Khrushchev acted cautiously, fearing unrest among Stalin supporters: he put the de-Stalinization “on hold” and didn’t criticize Stalin until 1961. That year, Stalin’s corpse was removed from the Mausoleum and buried near the Kremlin wall. All the cities and villages bearing his name were renamed. Khrushchev described his reign as “the kingdom of the ax and terror.” 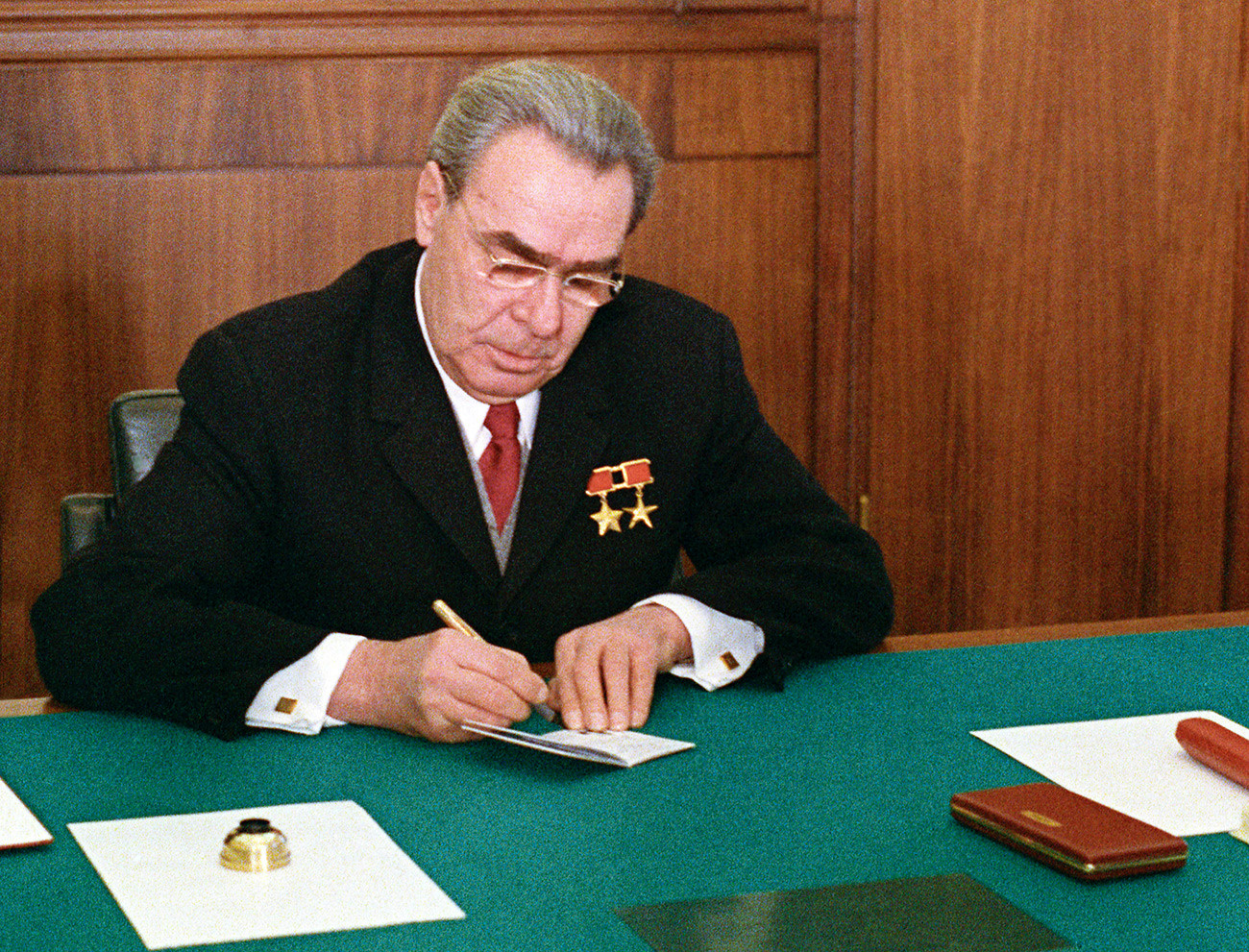 Leonid Brezhnev, unlike Khrushchev, stayed away from discussing Stalin's heritage.

In 1964, Nikita Khrushchev was forced to resign, losing power to Leonid Brezhnev. Throughout Brezhnev’s long rule (1964 – 1982), Stalin was neither praised nor criticized. “Under Khrushchev, we were corrupting our intelligentsia,” said one of the powerful conservative statesmen of the Brezhnev era, Mikhail Suslov, meaning, among other things, de-Stalinization.

For a while, Stalin and his purges remained a taboo topic in the USSR – at least at the level of party officials. Only during Gorbachev’s perestroika did a new wave of rehabilitations and severe criticism of the crimes of the 1930s begin. It was no coincidence that one of the main architects of that new de-Stalinization, Alexander Yakovlev, was among those who listened to Khrushchev’s “secret speech” in Moscow in 1956.