How the Soviet flag ended up on McDonald’s logo (PHOTOS) 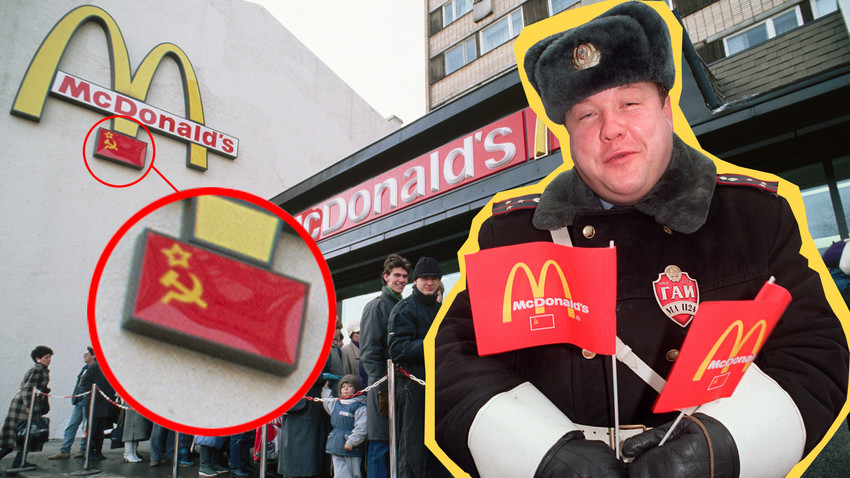 Getty Images; AFP
The U.S. company's desire to win the hearts of Soviet citizens was so great that it placed the Soviet flag on its logo and handed out souvenir badges with the hammer and sickle.

Not long ago, a user on a Russian online forum posted a photo of a McDonald's badge with the Soviet flag. “My father worked at the first McDonald's in the USSR and was given this badge,” he wrote. 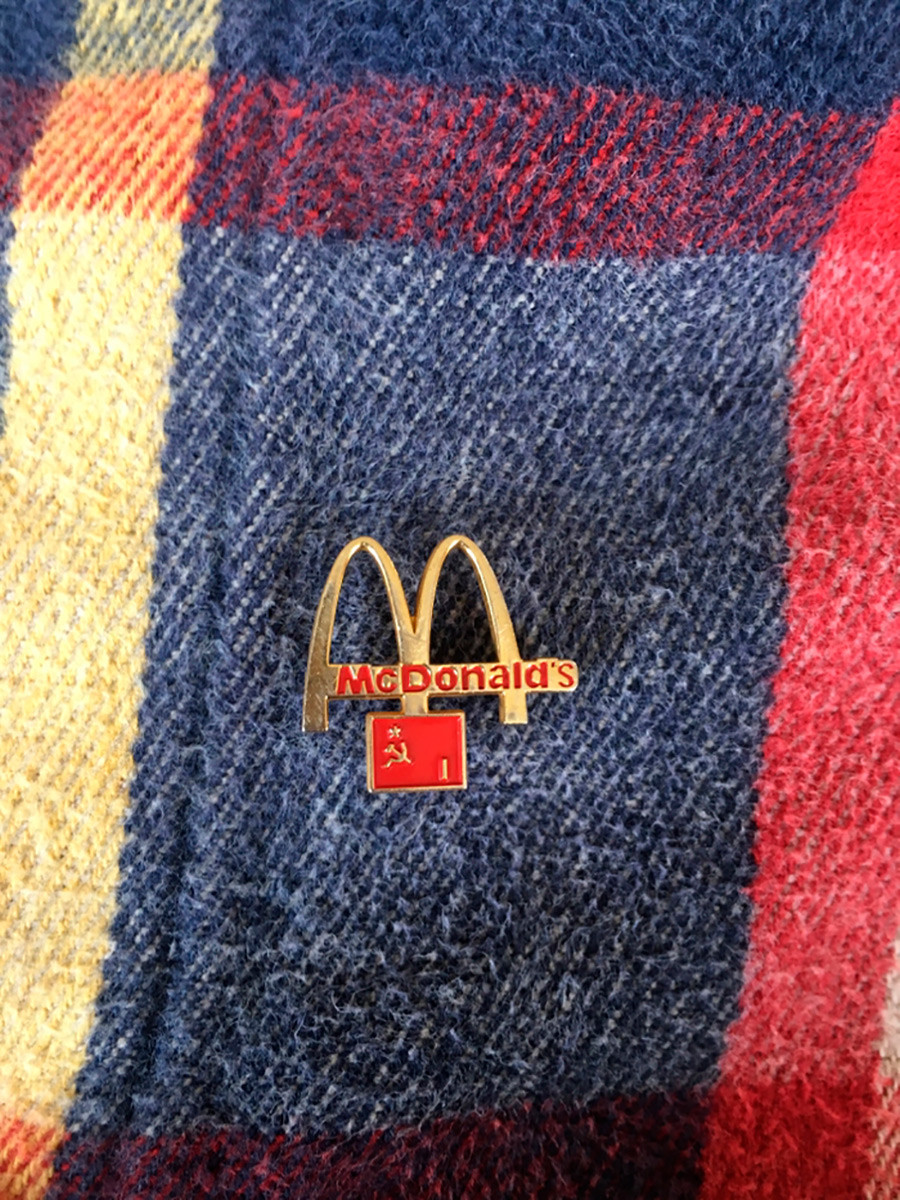 It turns out that in the first year after McDonald's launched in the USSR, the Soviet hammer and sickle could be seen not only on its employees' badges, but also on its souvenirs and even on the restaurant logo. However, all that lasted for only about a year, and because of this, there are very few reminders of the 'Soviet' period in the history of the famous fast-food chain.

The construction of the McDonald's restaurant on Pushkinskaya Square began in 1988, and on January 31, 1990, it welcomed its first customers. And they were greeted outside by the company's huge logo featuring the Soviet flag, complete with the hammer and sickle. 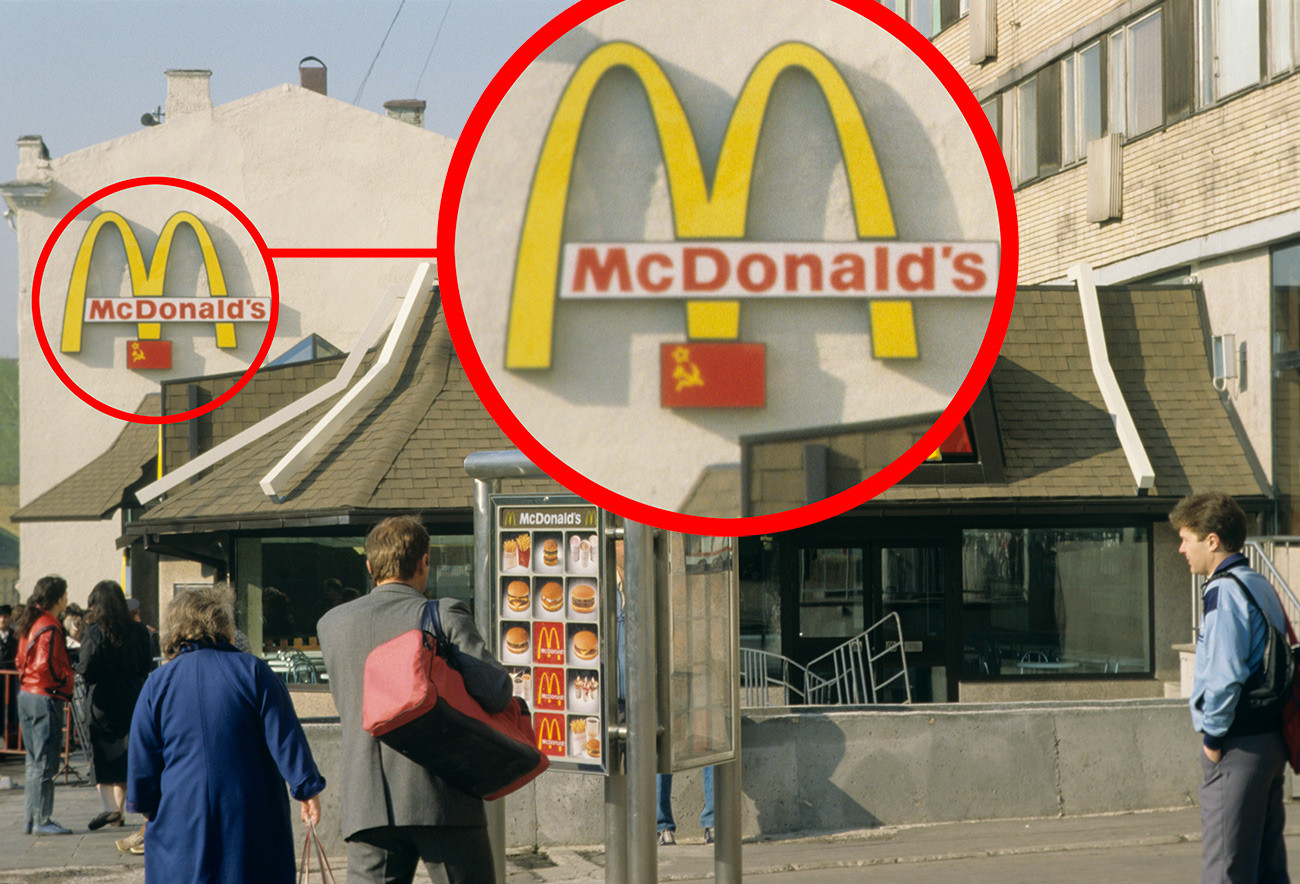 The opening of the first McDonald's restaurant in the USSR was quite the sensation! And that’s despite the fact that its prices were not particularly affordable for the average Soviet citizen. For example, a Big Mac cost 3.75 rubles; a Filet-O-Fish, 3.25 rubles; and a hamburger, 1.6 rubles.

By way of comparison: a monthly bus pass in Moscow at the time cost 3 rubles, while a set lunch in a canteen was just 1 ruble. And yet, people spent hours in a queue, just to try the 'capitalist' hamburgers and Coca-Cola. The first visitors were also presented with badges and flags, again with the Soviet flag. 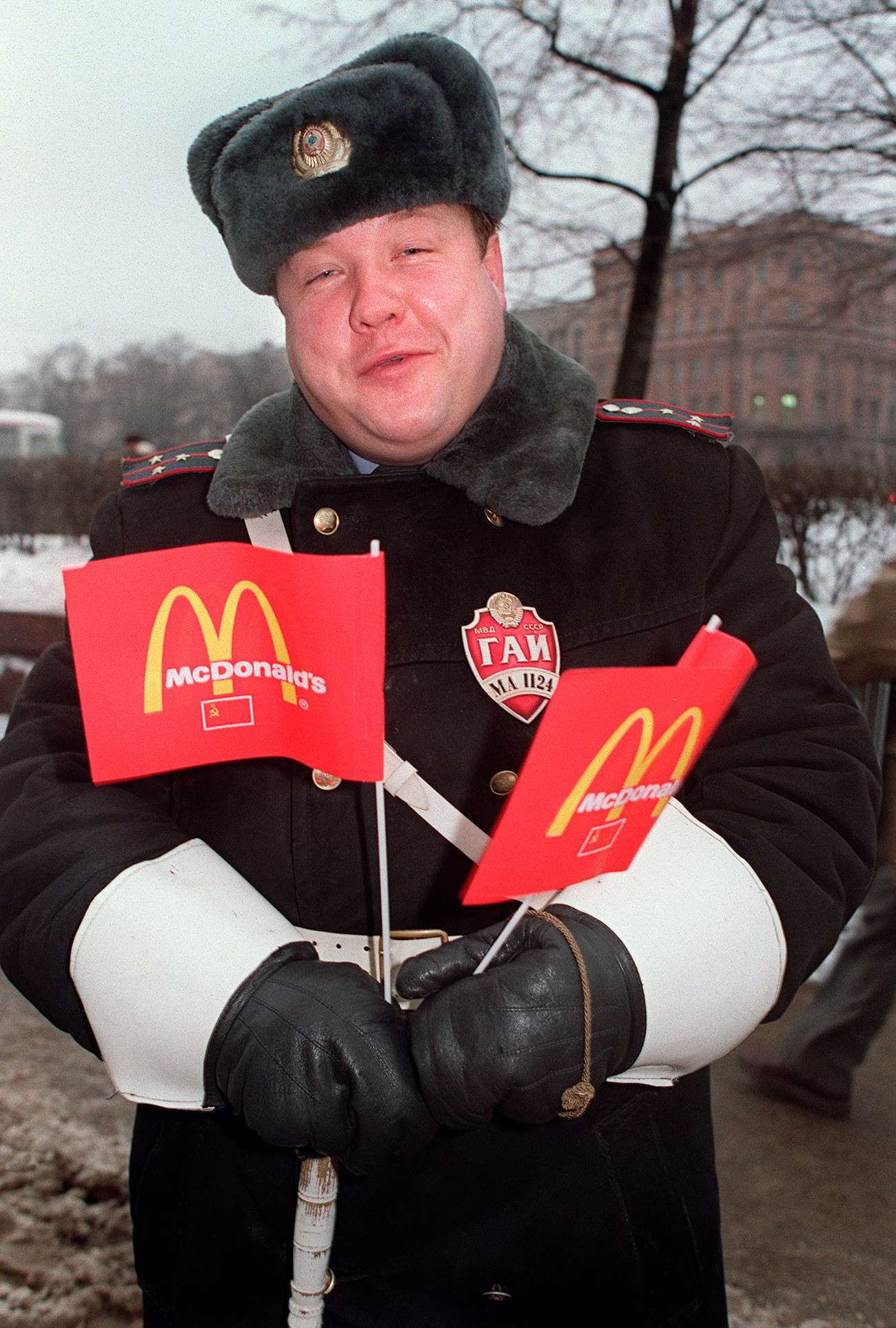 From time to time, online ads appear selling these badges. A few still even have the unique gift sets of four badges in a wooden box. According to the owner of one such souvenir set, they were presented mainly to foreign visitors in the first days after the opening of the first McDonald's and are, therefore, quite rare. 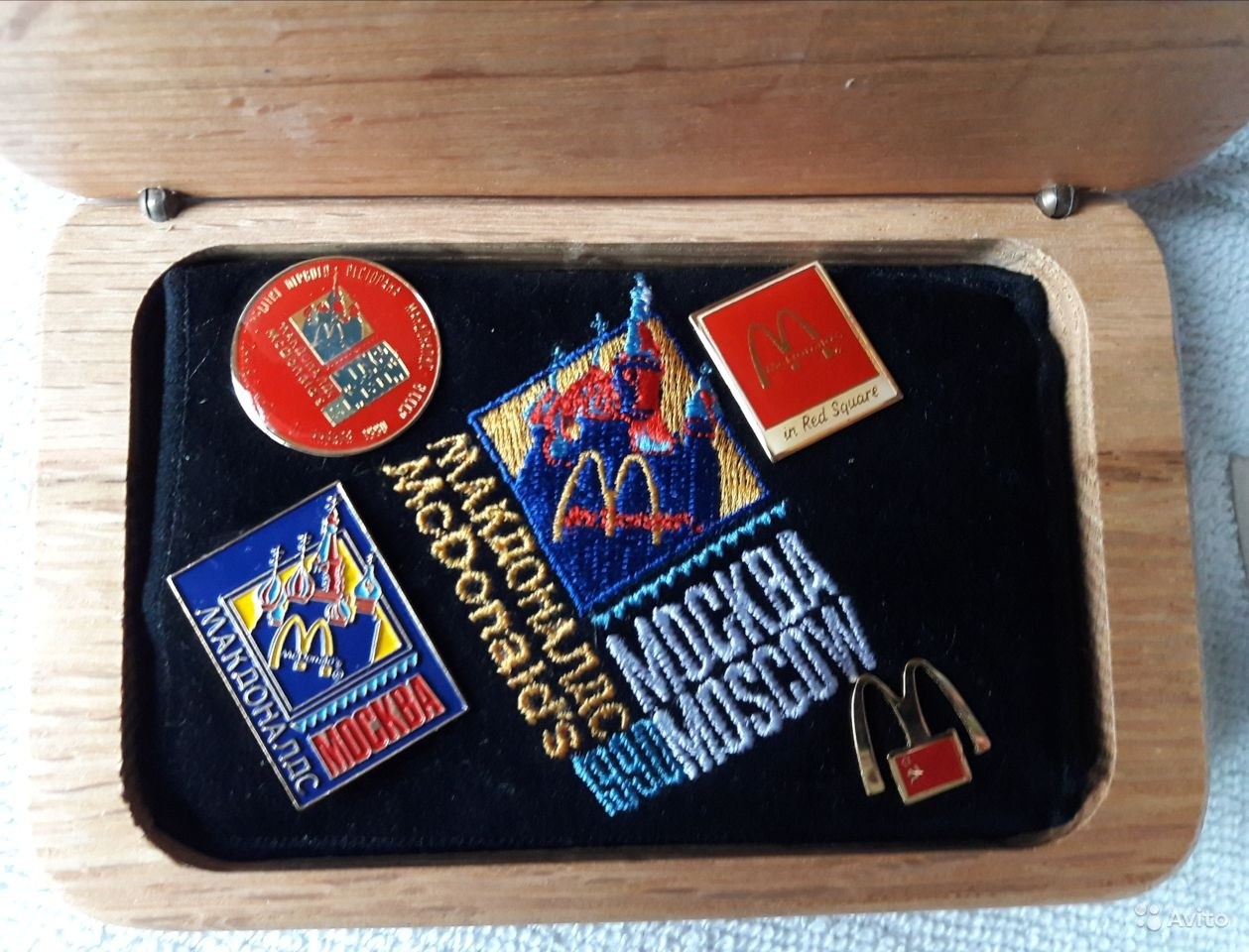 The USSR became the 52nd country where McDonald's is present. At the time, the restaurant on Pushkinskaya Square was one of the largest in the chain: it could accommodate up to 700 customers inside, plus another 200 on the summer terrace. On its first day, it received more than 30,000 customers, thus beating the previous McDonald's record, which was set in Budapest (more than 9,000 customers). 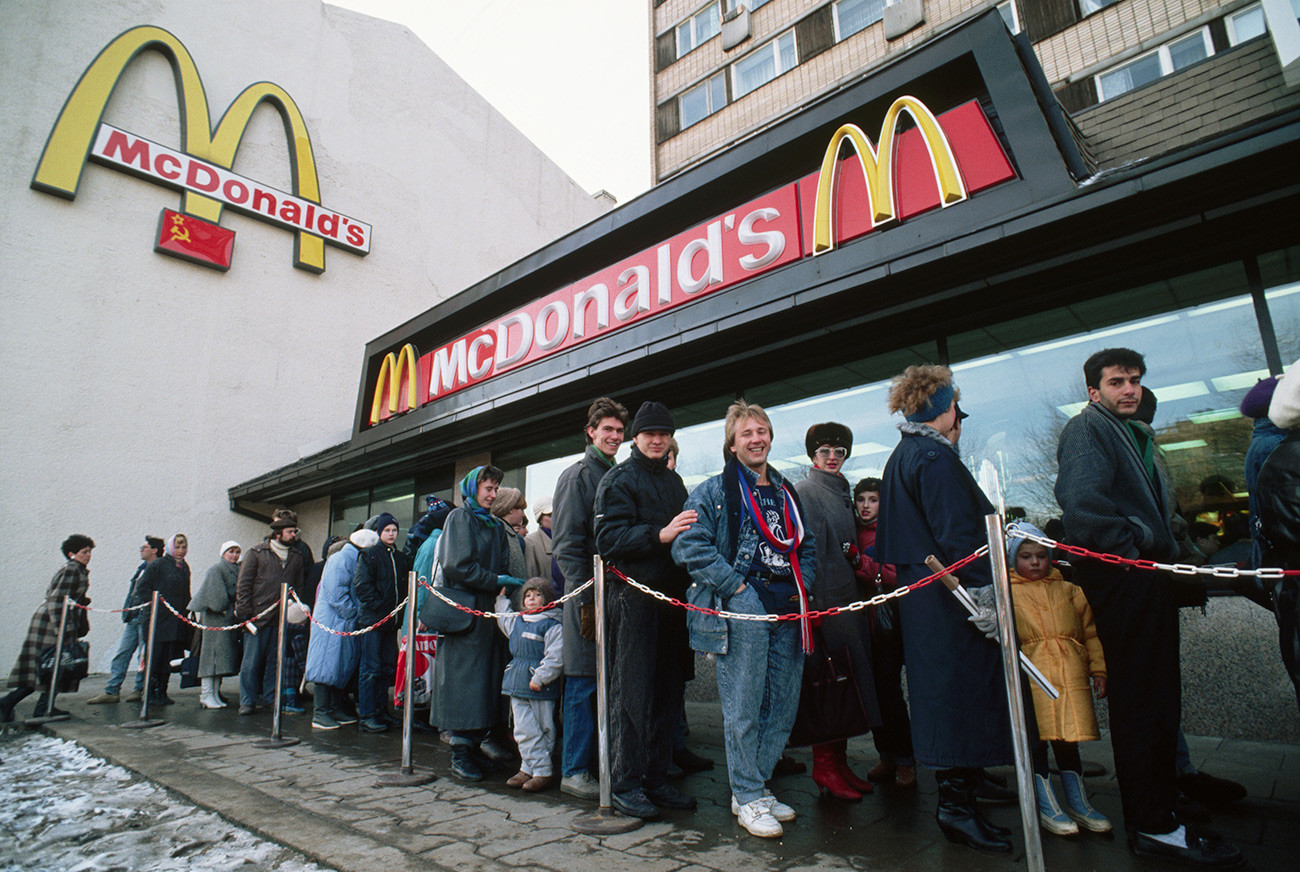 As early as in 1988, an agreement was signed to establish the Moscow-McDonald's company, after which the Moskovsky Komsomolets newspaper published the company's job applications. Applicants were required to fill out a questionnaire, attach a photo, post it - and wait. In the end, there were some 25,000 applicants for just over 600 jobs. One of the first employees, Elena Vasilieva, recalled how her job interview went: “For example, they asked me what I would do if a customer sitting at my table was in a bad mood? I replied that I would try to distract them, to cheer them up. They asked me about my hobbies, about the books I read. They watched me move, smile. It must have played a role that I spoke English and that I had a university degree. Where did I graduate from? The Mechanics and Mathematics Department of the Moscow State University, where I am a postgraduate student now." She admitted that she did not regret having chosen McDonald's over a career in science: she was paid good money and had a convenient work schedule. 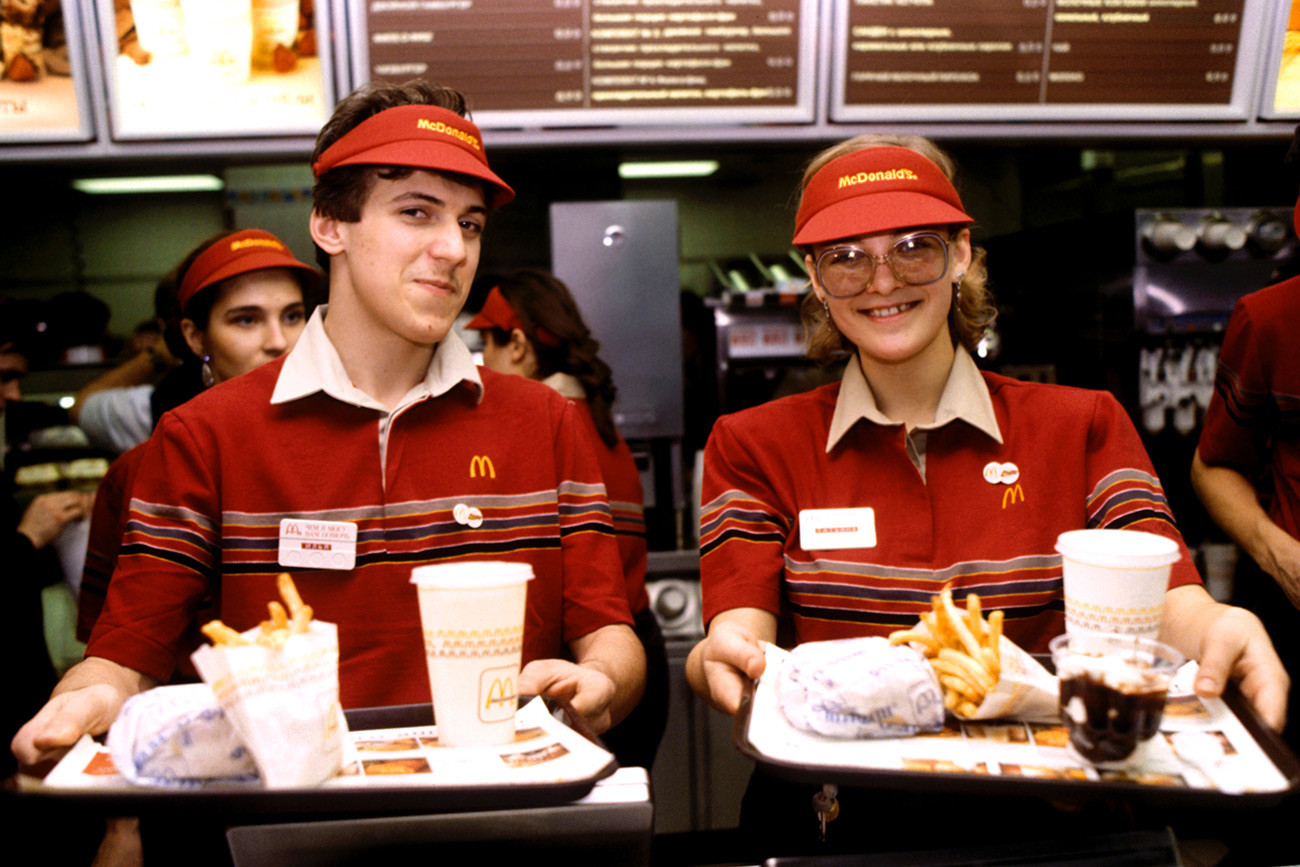 Indeed, the company paid 2 rubles per hour, which meant that, including bonuses, staff could receive some 300 rubles a month, which was the average professional salary at the time. Furthermore, the first employees were trained in Canada.

Hold on, why Canada?

Although McDonald's is an American company, in the Soviet press, it was presented as a Canadian one. Ironically, the fact is that the first restaurant, indeed, was a joint Soviet-Canadian venture. 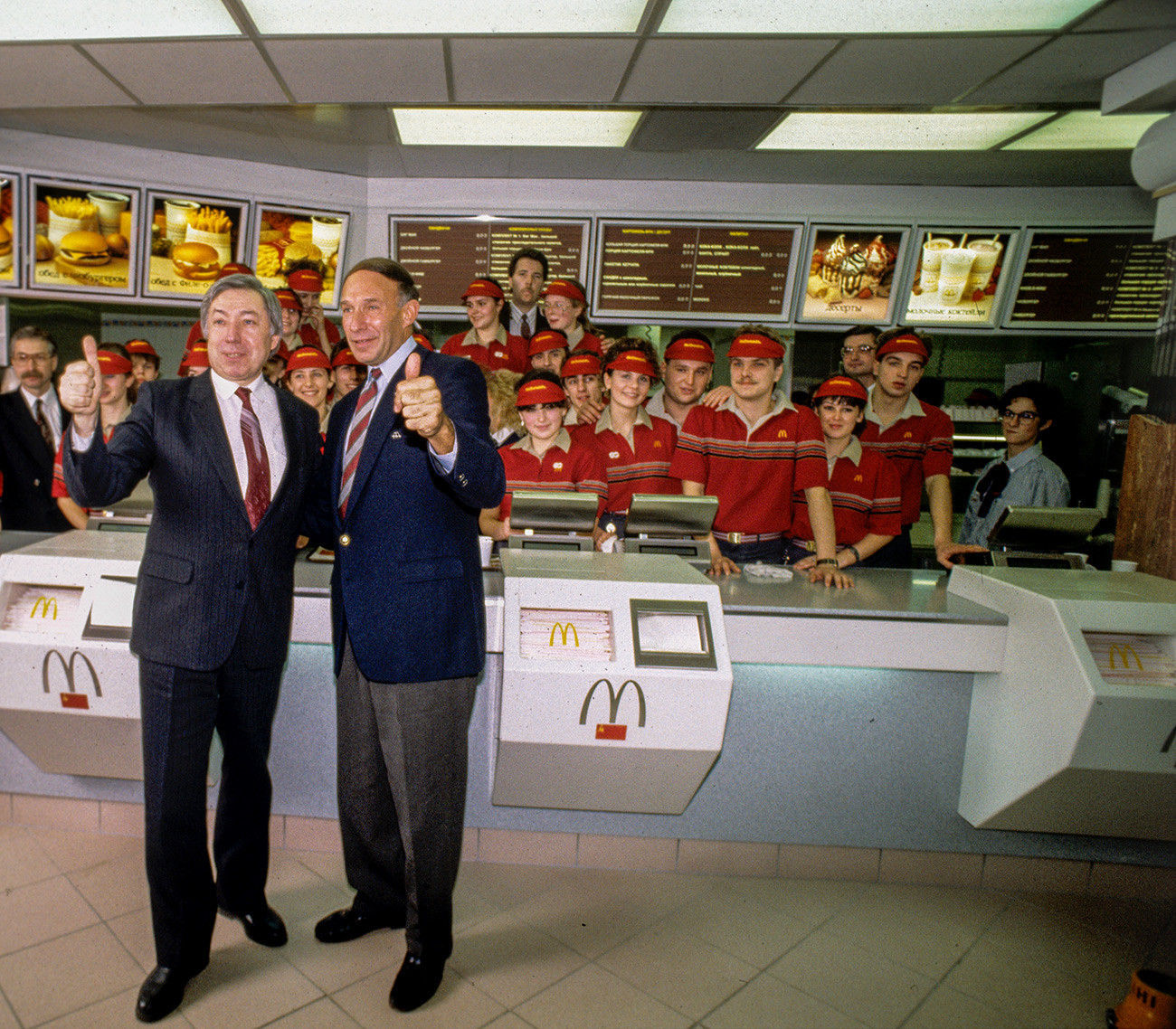 Vladimir Malyshkov (left), Director of joint Soviet-Canadian restaurant McDonald’s, Chairman of the Board, and George A. Cohon, Deputy Director of McDonald’s restaurant.

The cover of the May 1990 issue of the Young Technician magazine says that it is a Canadian restaurant, but at the same time, it’s clear that its logo is branded with the Soviet flag. It was precisely because it was a Canadian enterprise that the Moscow McDonald’s got the Soviet flag on its logo. 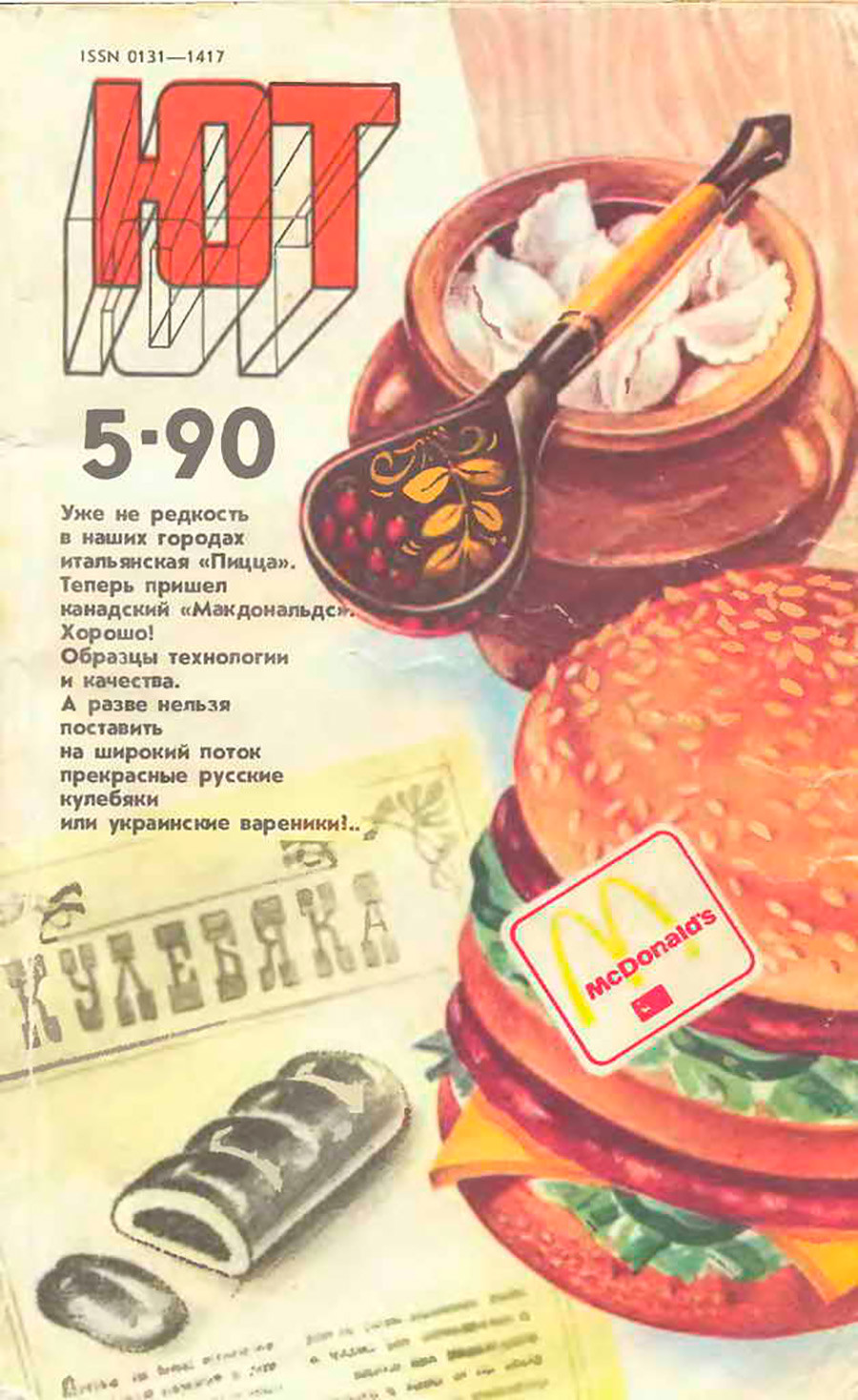 How did this happen? Simple. In those days, the logo of the Canadian McDonald's also had the Canadian flag on it, and the same marketing style was retained for the USSR. 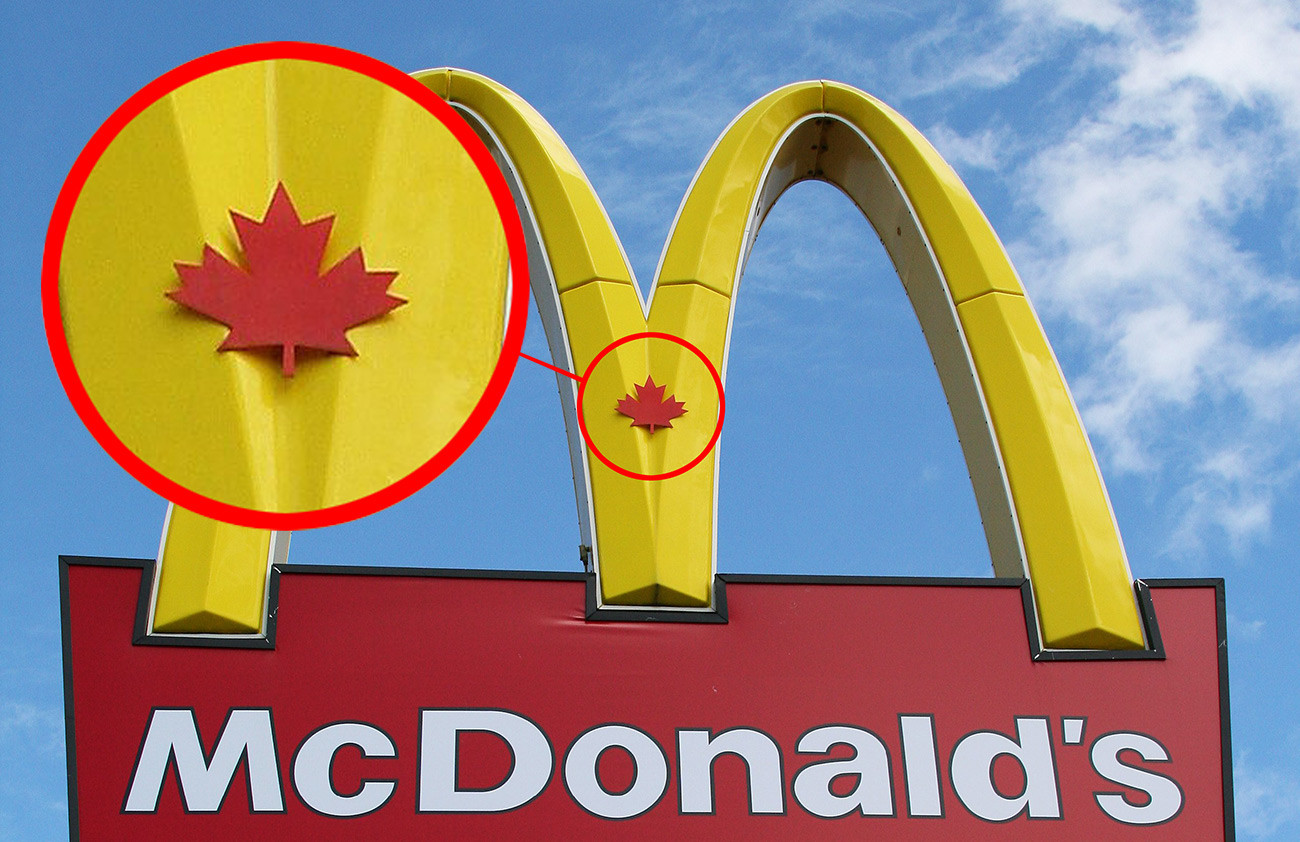 In Moscow, the Soviet flag was removed less than a year after the opening of the first restaurant, and for obvious reasons. The second McDonald's restaurant on Gazetny Pereulok, which was built in 1993, already had the usual international logo without any flags. 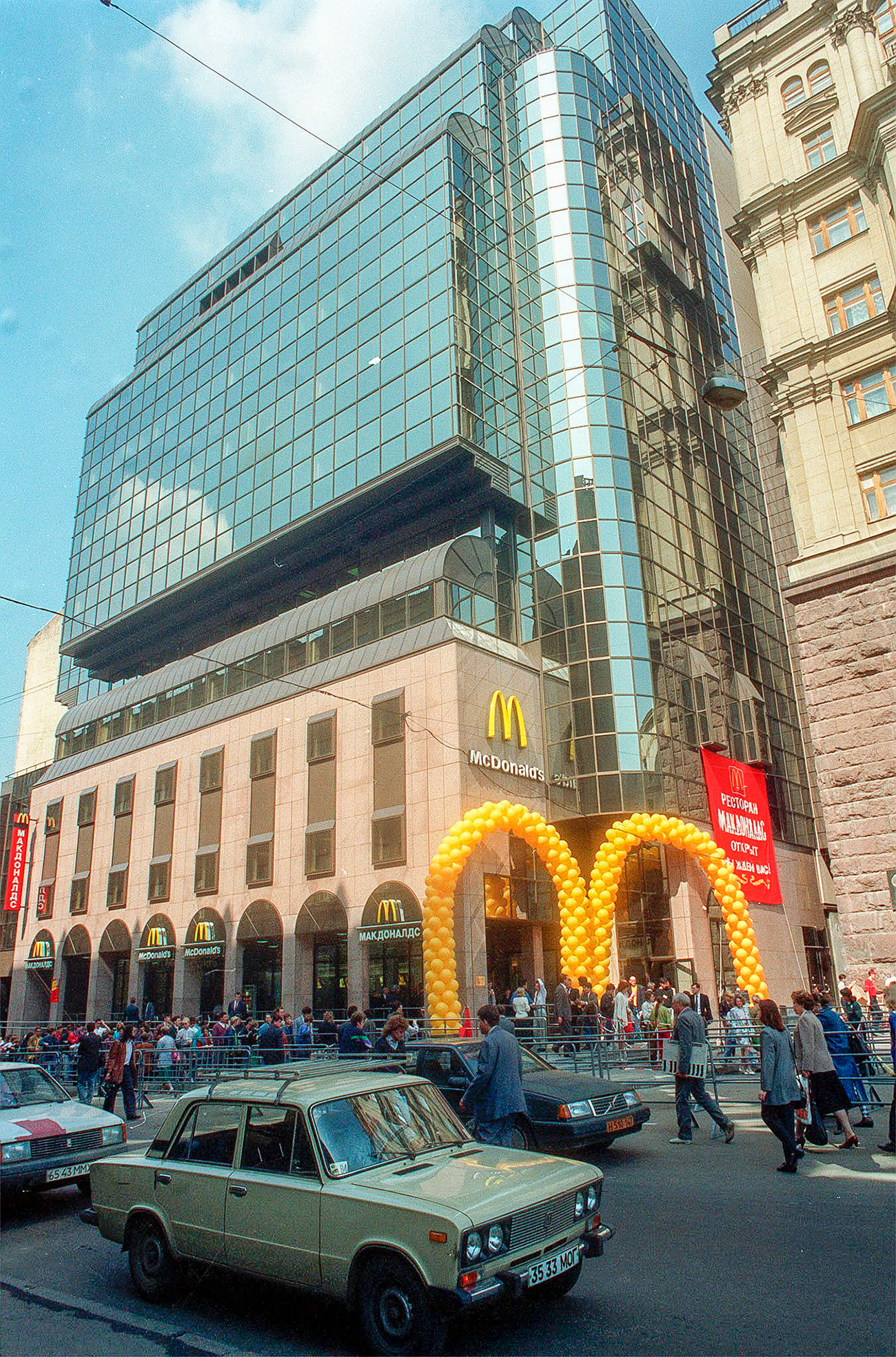