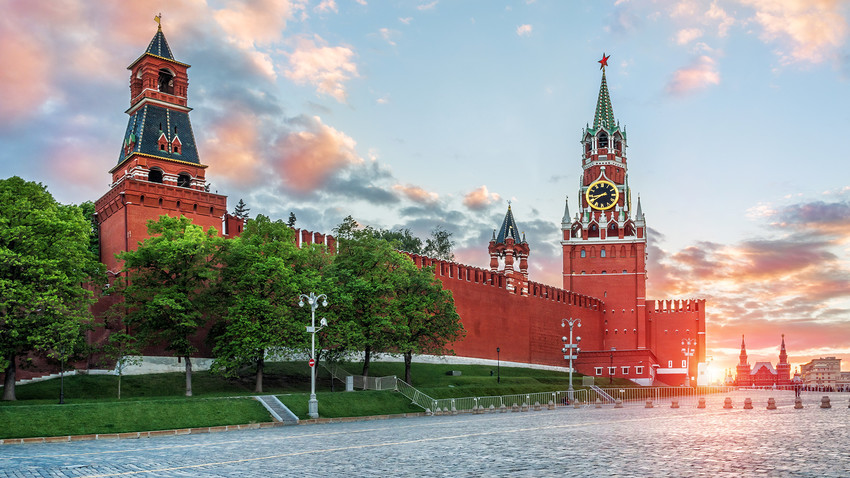 Legion Media
It’s not only one of the most famous symbols of Moscow. The Spasskaya Tower has been many things over the years, including a mini-fortress, a holy gate, and even a prison.

1. Built in 1491 by Italian architect Pietro Antonio Solari, the Spasskaya tower has historically been considered the main tower of the Moscow Kremlin. Its gates were considered holy by the public and, in tsarist days, Russians believed the tower had miraculous powers and anyone passing through the gates had to dismount their horses and remove their hats to show their respect. It was the main entrance for the royal, diplomatic, and religious processions, and it was from here where the regiments went to war. 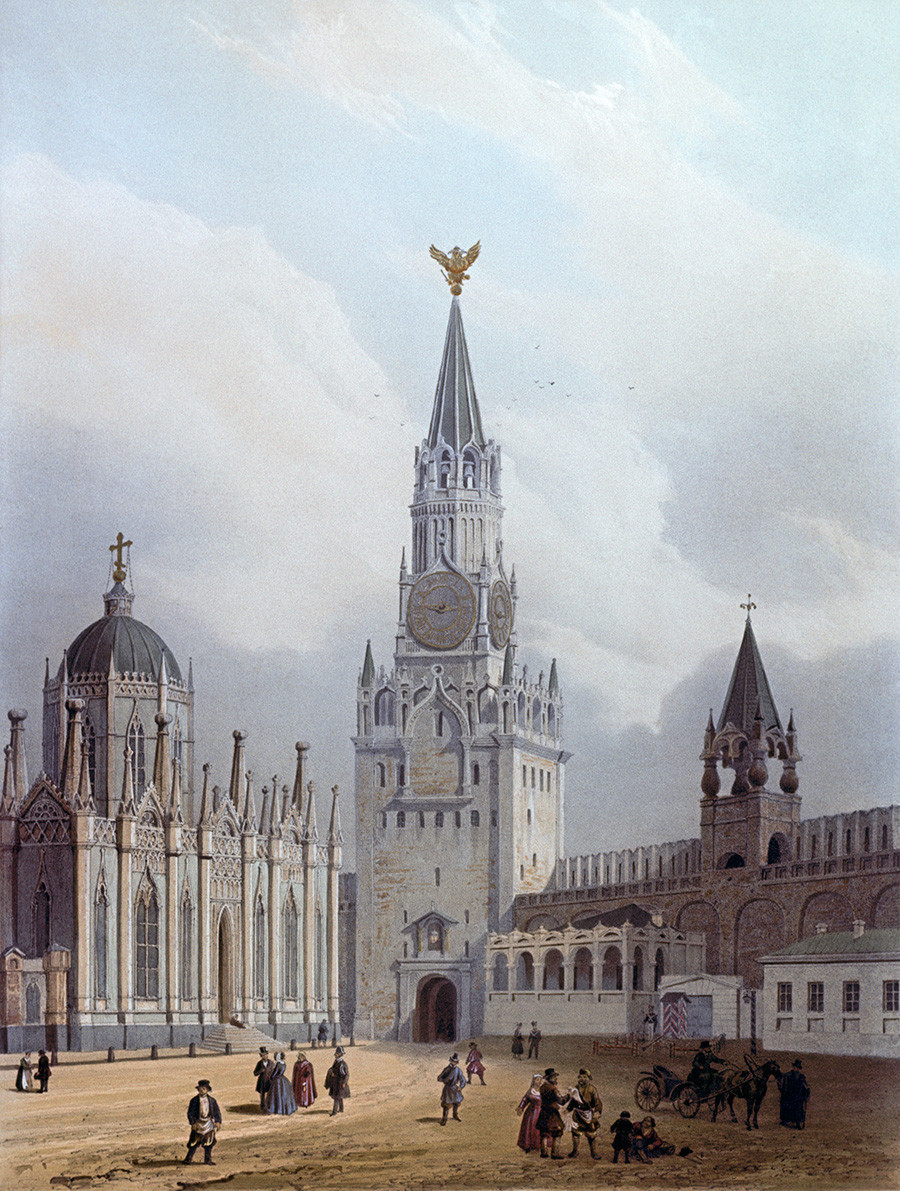 The Ascension Monastery (demolished in 1929) and the Spasskaya Tower in the Moscow Kremlin. A reproduction from the album "Moscow and Muscovites", the State Historical Museum.

2. The tower was initially called “Frolovskaya” as it stood near the Frol and Laur Church, which is no longer there. In April 1658, like many other Kremlin towers, it got renamed by Tsar Alexei Mikhailovich to “Spasskaya”, in honor of the icons of the Spas (Savior) Smolensky, placed above the gate to the Red Square, and of the Spas (Savior) Nerukotvorny, situated above the gates from the side of the Kremlin.

3. Like other towers, the Spasskaya Tower was built as part of the Kremlin’s defensive system. If the enemy penetrated the walls, the massive iron doors of the tower would close and trap the invaders inside it. Basically, the tower would turn into an independent fortress capable of withstanding the most serious attack. The multi-tiered construction of the tower, open tombs and numerous loopholes made it possible to hit the enemy on the upper battlefields of adjacent walls. In the 17th century, during the Time of Troubles, the tower was also used as a prison. 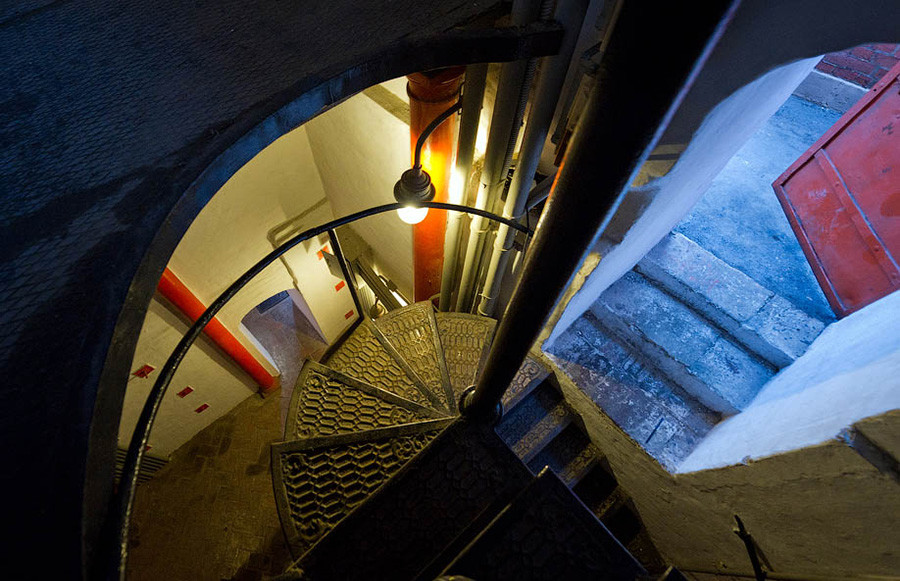 The stairway to the Spasskaya Tower

4. Legend has it that, when in 1812, Napoleon passed through Spassky Gate in captured Moscow, he didn’t take off his famous hat (contrary to tradition) and it got pulled by a gust of wind - a bad omen, as it later turned out! When the French army retreated from Moscow, Napoleon ordered to blow up the Spasskaya Tower, but the Don Cossacks arrived in time and put out the already lit wicks.

5. Before the 17th century, the Spasskaya Tower used to be twice as short in height as it is today. Since 1625 it started to “grow” higher as a result of various add-ons which started with a multi-tiered top erected by Russian architect Bazhen Ogurtsov and the Englishman Christopher Galovei. Later on, the tower got “crowned” by the coat of arms of the Russian Empire - the double-headed eagle, which in 1935  got replaced by the current ruby star. Together with the star, the tower is 71 meters tall and has 10 floors. 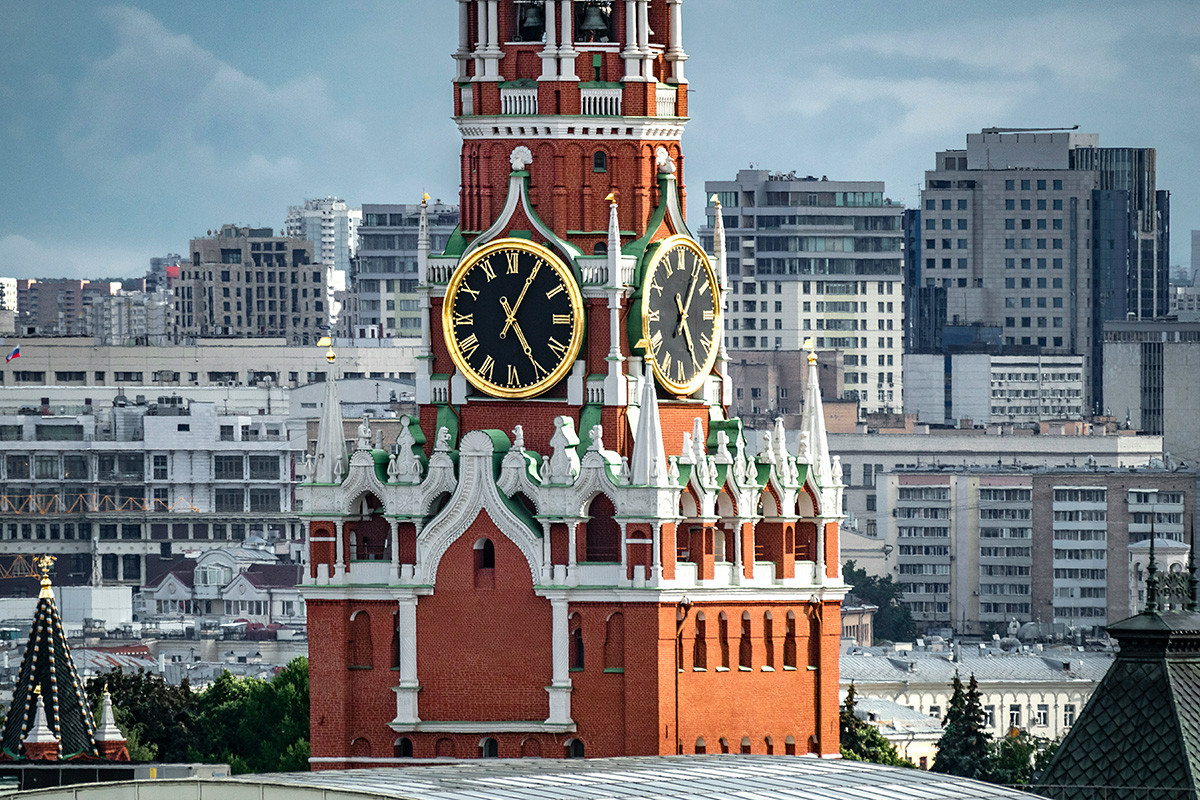 6. The Spasskaya Tower and its clock are not only the symbols of the Kremlin, but also of New Year’s celebrations. Basically, New Year for Russians starts with the ringing of the Kremlin clock chimes. As the story goes, Spasskaya Tower got its first clock in the 15th century, before it was replaced many times and even played various melodies ranging from “Oh, you dear Augustin” to “The Internationale”. From 1938 to 1996, the clock was completely silent, before being made to play its current repertoire of two melodies: the Russian anthem and the “Slavsya” Chorus from the end of Glinka’s opera, “A Life for the Tsar.”