How I defended Stalingrad 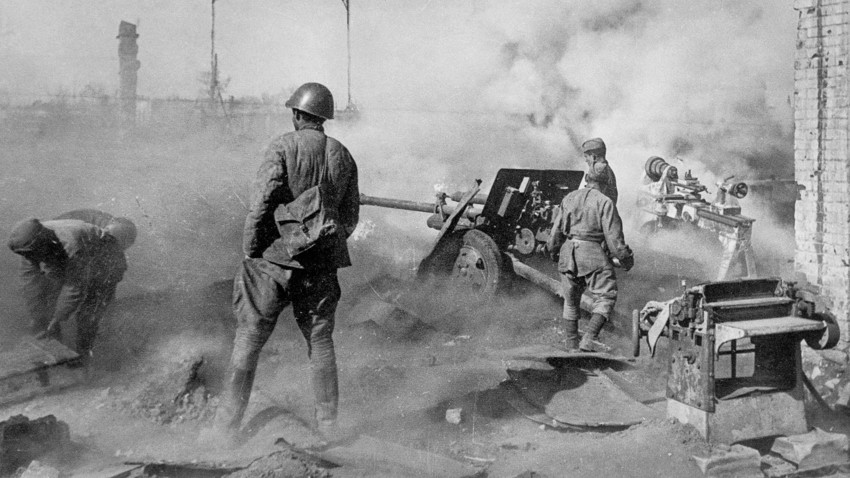 Getty Images
The Battle of Stalingrad was a veritable meat-grinder for both the Soviet and German armies. Few made it through the most terrible battle in the history of mankind from day one to day done.

More than a million Soviet soldiers took part in the fateful Battle of Stalingrad, which marked the turning point in WWII. Some fought to stop the enemy on the outskirts of the city, others engaged in close-quarter combat for every building and street. In combination, they dealt a fatal blow to the most powerful German force on the Eastern Front — the 6th Army of General Friedrich Paulus.

After reviewing dozens of memoirs of Red Army soldiers who took part in the battle, we imagined what the Battle of Stalingrad looked like through the eyes of a common soldier who witnessed all the key episodes of this nightmare from the first day to the last.

Meet our hero. Siberian Mikhail Nekrasov, 20, an ordinary infantryman. Recently drafted into the Red Army, he will endure a baptism of fire in the cauldron of the most horrific battle in history. His diary is based on the memoirs of foot soldiers, tankmen, radio operators, artillerymen, and soldiers from other divisions who collectively succeeded in breaking the spine of the Wehrmacht in the city on the Volga. 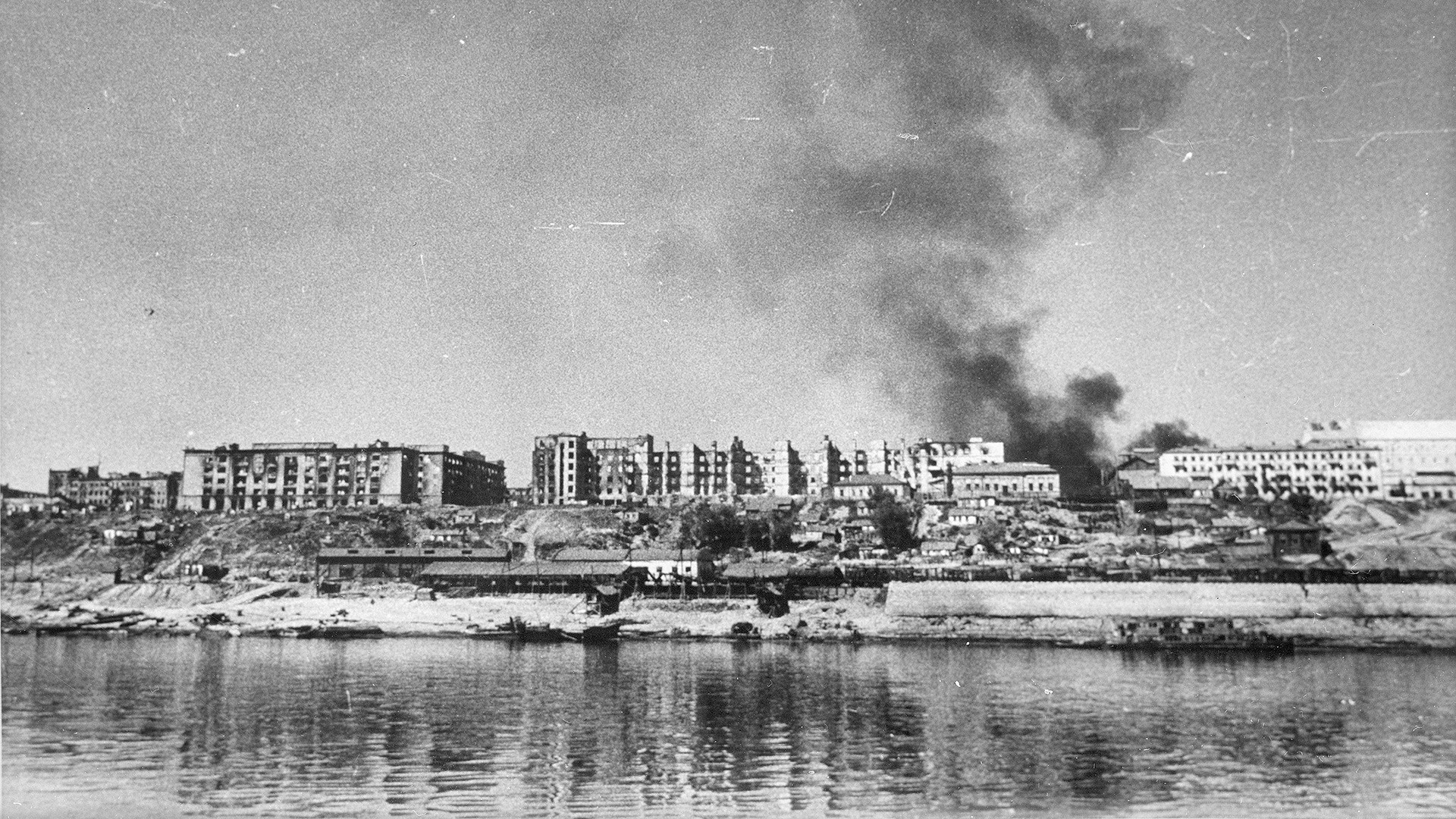 Just arrived in Stalingrad and walked straight into hell. Hundreds of German bombers are turning the city into an inferno. Everything that can burn is burning. Even the Volga is on fire — burning oil from bombed storage facilities is gushing into the river.

Under bombardment and artillery fire, we crossed to the west bank of the Volga. It's difficult to make out what’s happening on the other side, only the looming box-like buildings strewn with pieces of brick, logs, and iron, and the black treetops are visible. We have set up base in the ruins. The HQ of our 62nd Army is sited right here on the river bank. 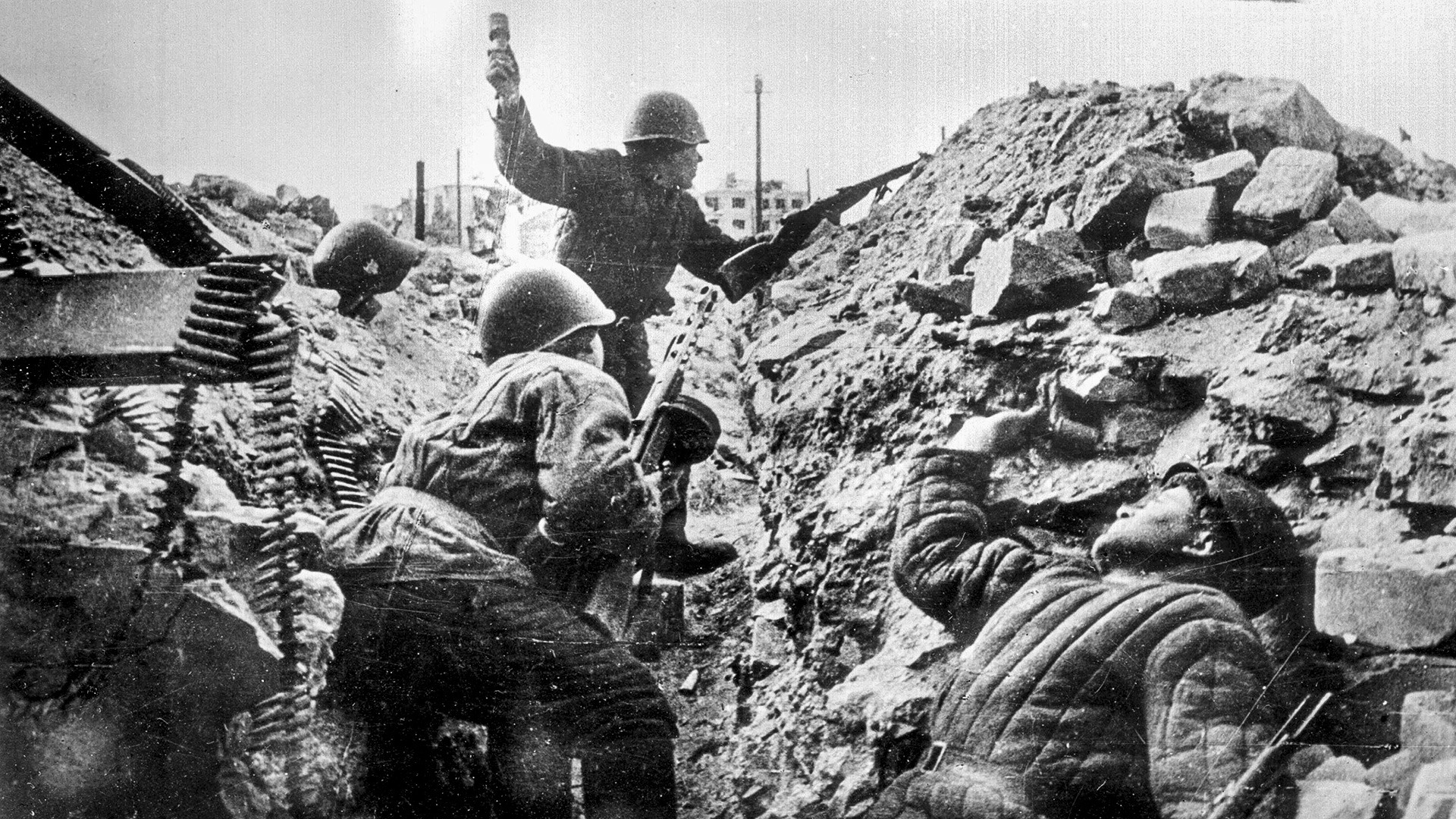 The Luftwaffe hovers over the city day and night. There is no escape from the hum. All you want to do is burrow deeper into the ground, nibble it, dig it with your nails to merge with it, become invisible. Our planes are almost nowhere to be seen, sometimes a few “donkeys” (I-16s) try to engage, but they are scattered into pieces by the fire from the “Messers” (Messerschmitts).

The commander of the 1345th regiment, Major Zhukov, and the regiment commissar, Senior Political Instructor Raspopov, were shot in front of the unit: “Under attack from the enemy, they displayed fear in battle, abandoned the regiment, and shamefully fled the battlefield.” We despise cowards. Everyone is scared, but everyone fights. These two got their just desserts... 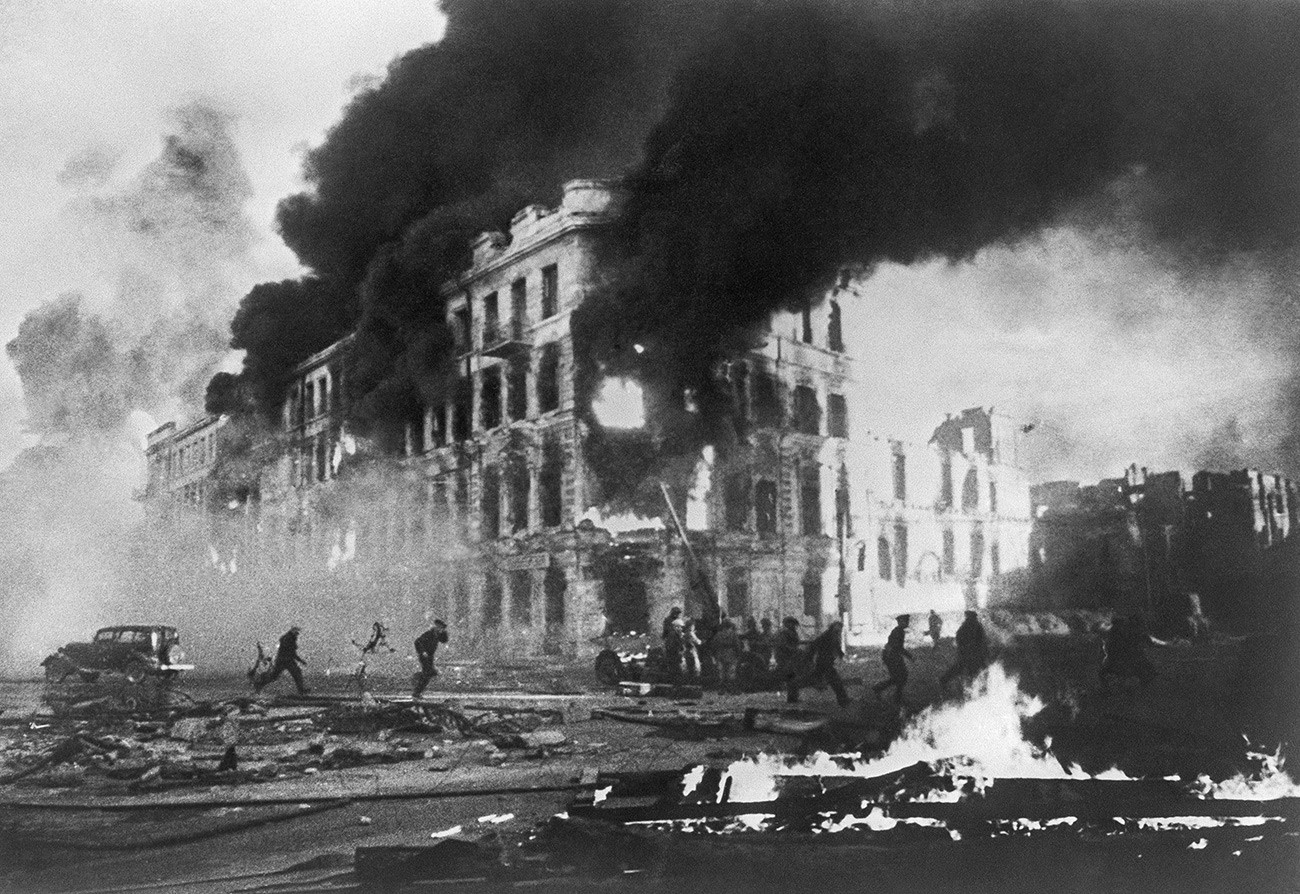 The enemy infantry broke through to the city center, and somewhere gained access to the river. The order was received to retake the State Bank, from where the Germans had a strategic view of the whole Volga. An anti-retreat detachment of the 13th Guards Rifle Division stormed the building with us in support. Sappers disguised as machine-gunners dragged boxes of TNT inside. After the explosion, the assault troops burst in and killed the stunned garrison. Anti-retreat detachments in Stalingrad fight alongside ordinary units. The Command mainly uses them as a reserve, and not for their intended purpose. Otherwise there wouldn’t be enough people!

There’s a battle for every building, every street. Day and night. There’s no more fear, just bluntness... and a constant near-death feeling. Plus hopelessness and indifference. Our wrecked tank sits there, something’s burning inside, exploding. The master sergeant approaches the smoldering tank with a pot of porridge and calmly places it on the armor-plating to warm it up. Nothing seems strange anymore... 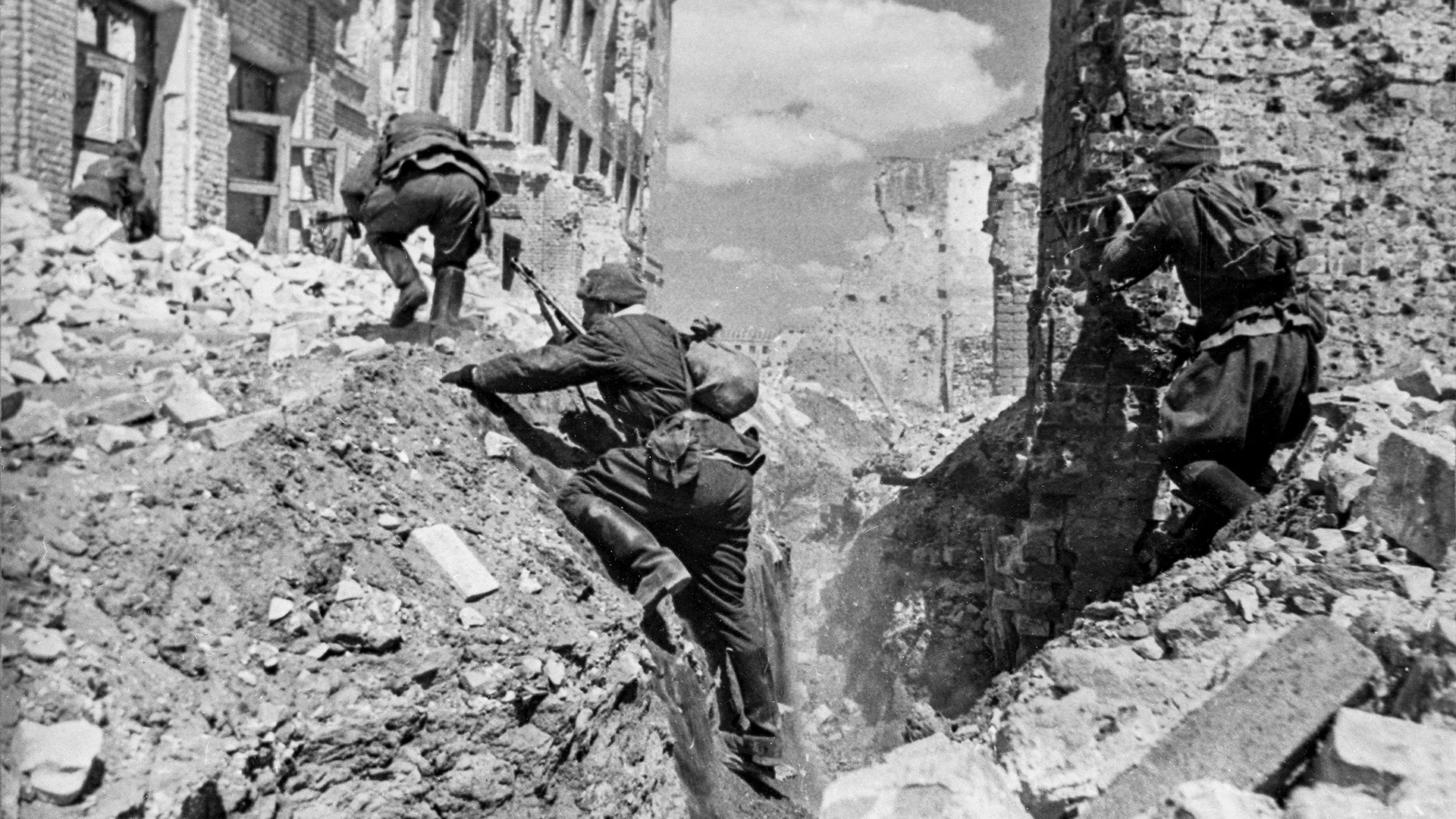 Sometimes we see our T-34s and KVs with German crosses on the turrets. Once at dusk, several of these captured tanks wedged into a column of our tanks on their way to be repaired. They opened fire from the nearby tractor plant and did a lot of damage before they were destroyed. Our soldiers, of course, are heroes, but the Germans sometimes show a fanatical level of sacrifice.

The Command ordered us to hold the Barricades and Red October factories at any cost. Just behind these giant complexes is the Volga. We lose them, we lose the city. Easier said than done, though. Despite our resistance, the Germans are driving us towards the river. 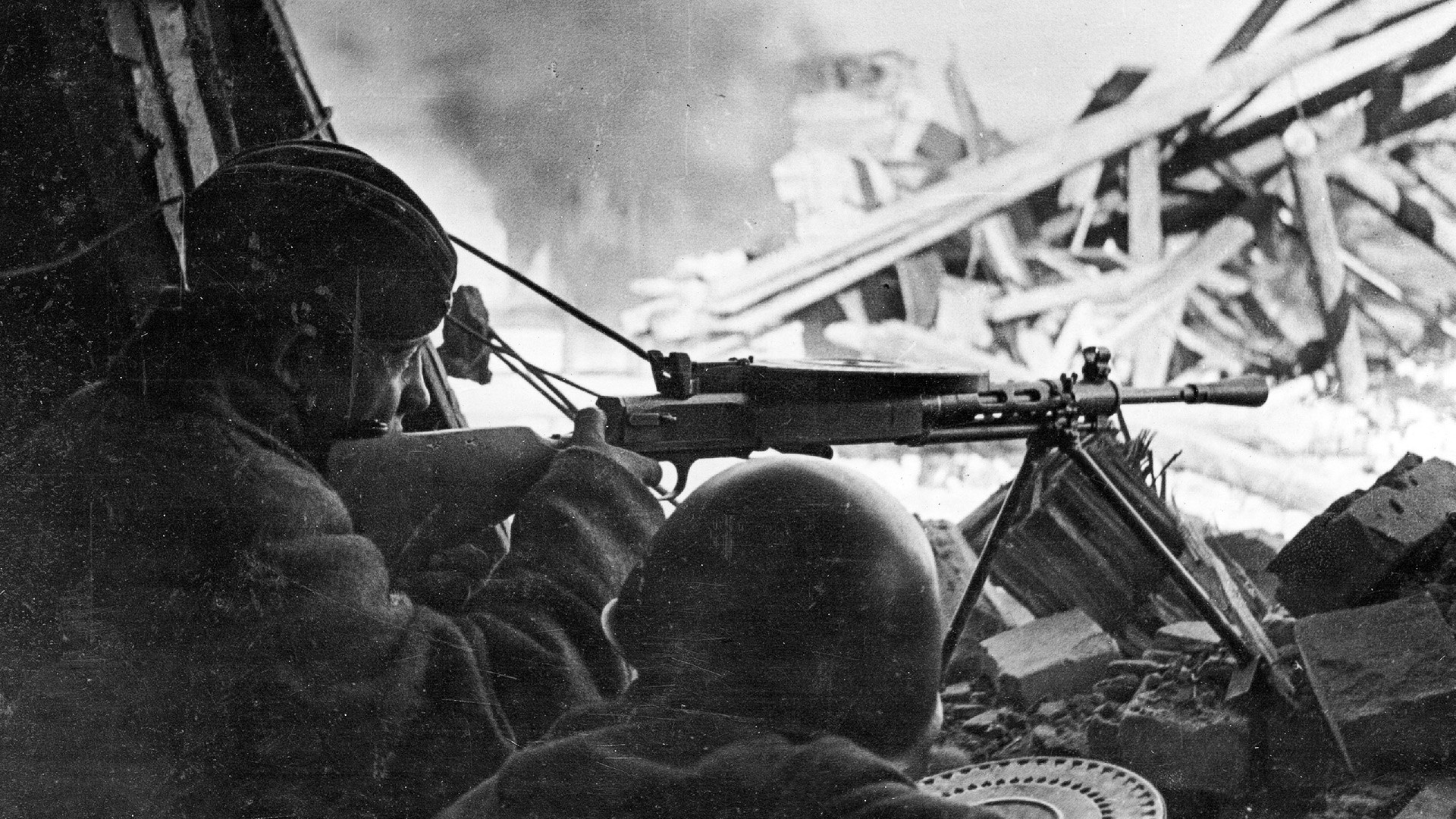 All the Barricades workshops are lost. The remnants of our division managed to cling on to the edge of the factory. The enemy destroyed our neighbors and blocked us on three sides on a tiny patch of land. Behind is the Volga. The only communication with the “mainland” is via boat.

We're holding on with our last forces. Our whole small “island” is exposed to enemy fire along the length and breadth. The Germans storm it by day, and try to tunnel through by night. We fight hand-to-hand. All the basements are stuffed full of corpses. Rations are just one dried crust a day. Boats try to deliver supplies and take away the wounded, but they suffer heavy losses. At night our planes drop cargo, but mostly miss the target. There’s a shortage of cartridges, so we fight with captured weapons. When things get really bad, we call for friendly fire from our artillery on Zaitsevsky Island. 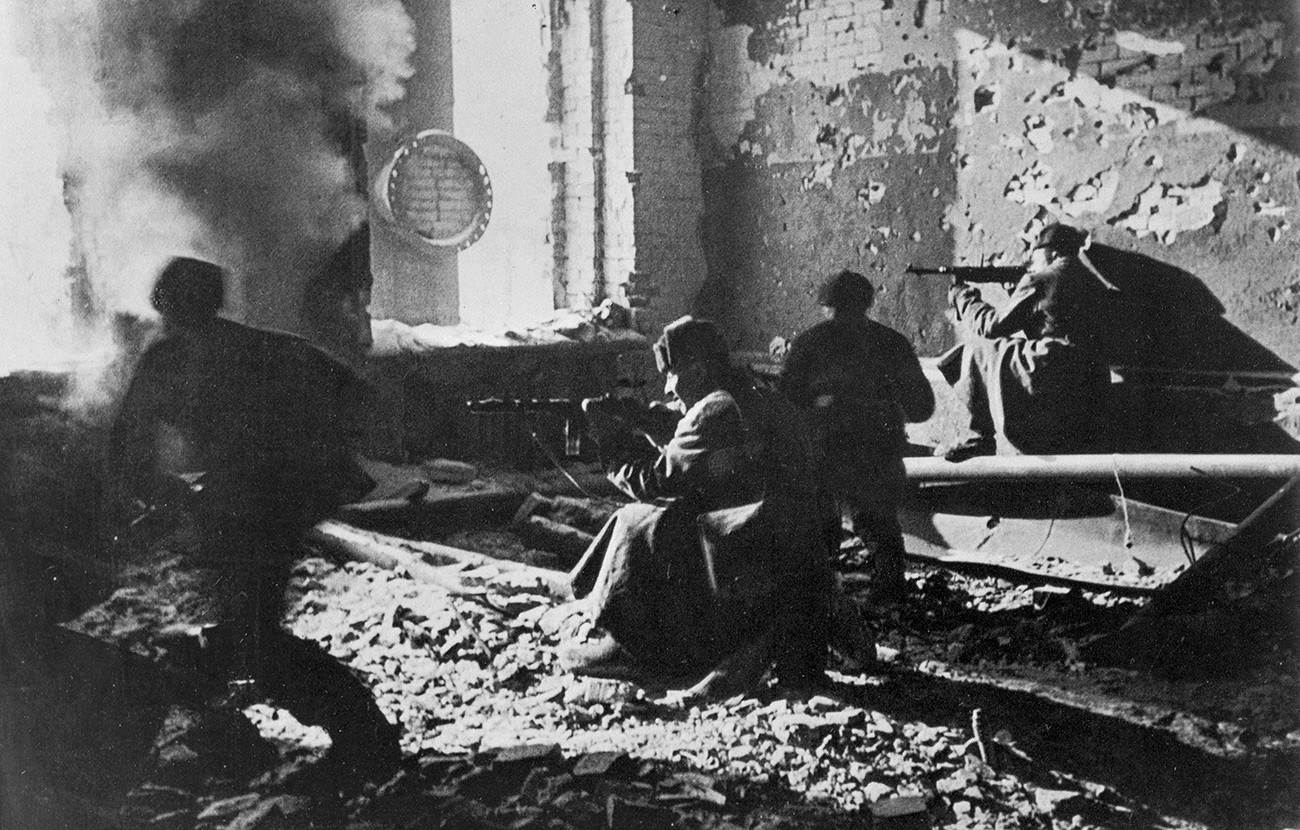 Good news at last. It turns out that for several days on the city outskirts our guys have been carrying out Operation Uranus, an offensive against the Romanian forces covering the German flanks. There's every reason to hope for success. The Romanians are less well-equipped and less effective than the Wehrmacht. We’ve got a tiny breathing space. The Germans have fallen silent, our positions are no longer being attacked.

The order was received to attack. The division is to liberate the factory and advance to the center of Stalingrad. I won’t be taking part — me and a unit of soldiers are being transferred out of the city to strengthen Operation Uranus. 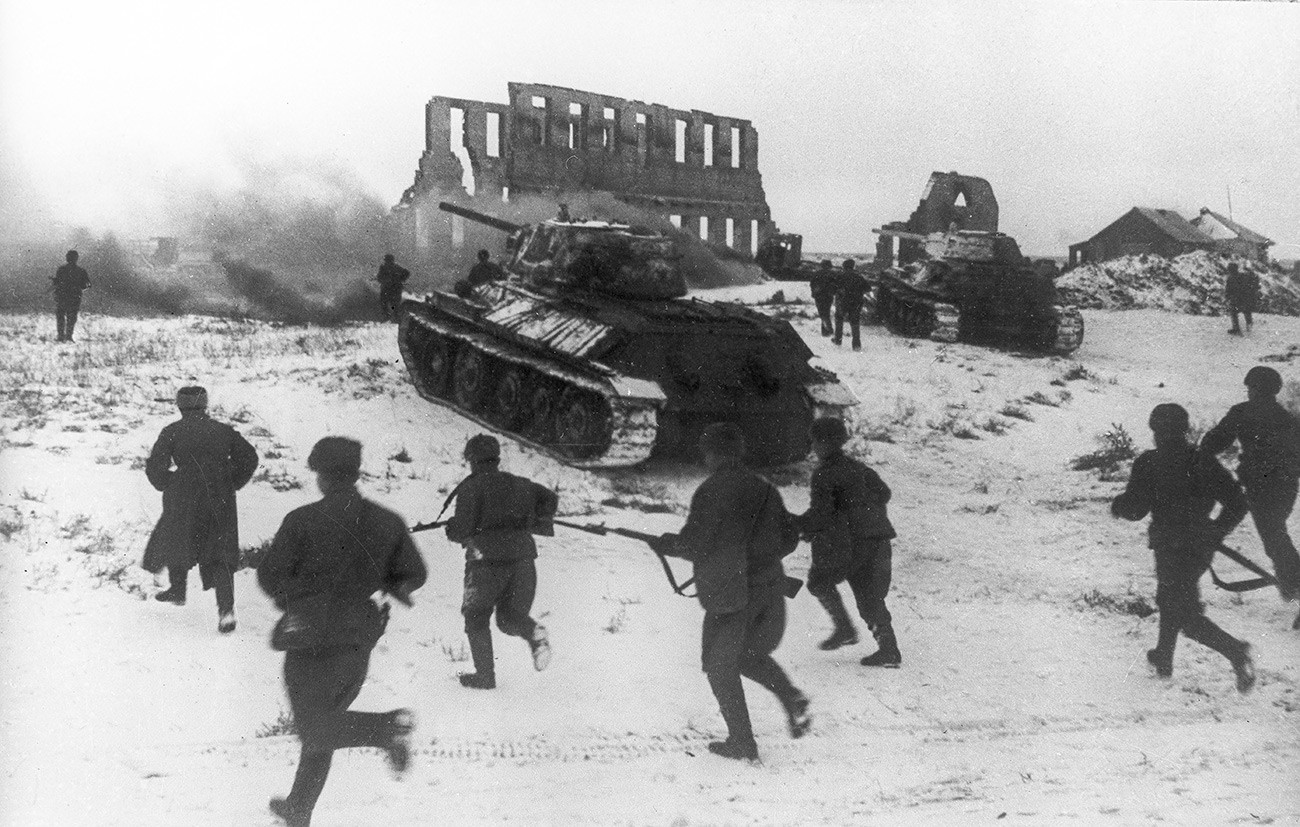 What a nightmare! At the village of Verkhne-Kumsky, Manstein’s tanks broke through our defenses while trying to relieve their own forces in Stalingrad. About ten of us survived. We ran to the edge of the field. Our artillery was there, silent. We shouted at them: “Why aren’t you bastards firing?!” They answered: “We have three shells per gun. The order is to fire only at point-blank range.”

At night, the Germans went round us. We don’t know where they’ll attempt another breakthrough. All around is the noise of motors and German speech. They spotted us and opened fire. How many fled, I can’t say. Barely conscious, we burst into a village. There was a guy in a white camouflage suit. I grabbed him by the collar, shook him, shouted in his face: “Who are you?!” He was scared, silent. I grabbed his headgear, my hand was stung the sharp corners of a… Red Army star! The other soldiers could barely drag me away. In the end, the German offensive was repelled — the guys from the 2nd Guards Army helped out. 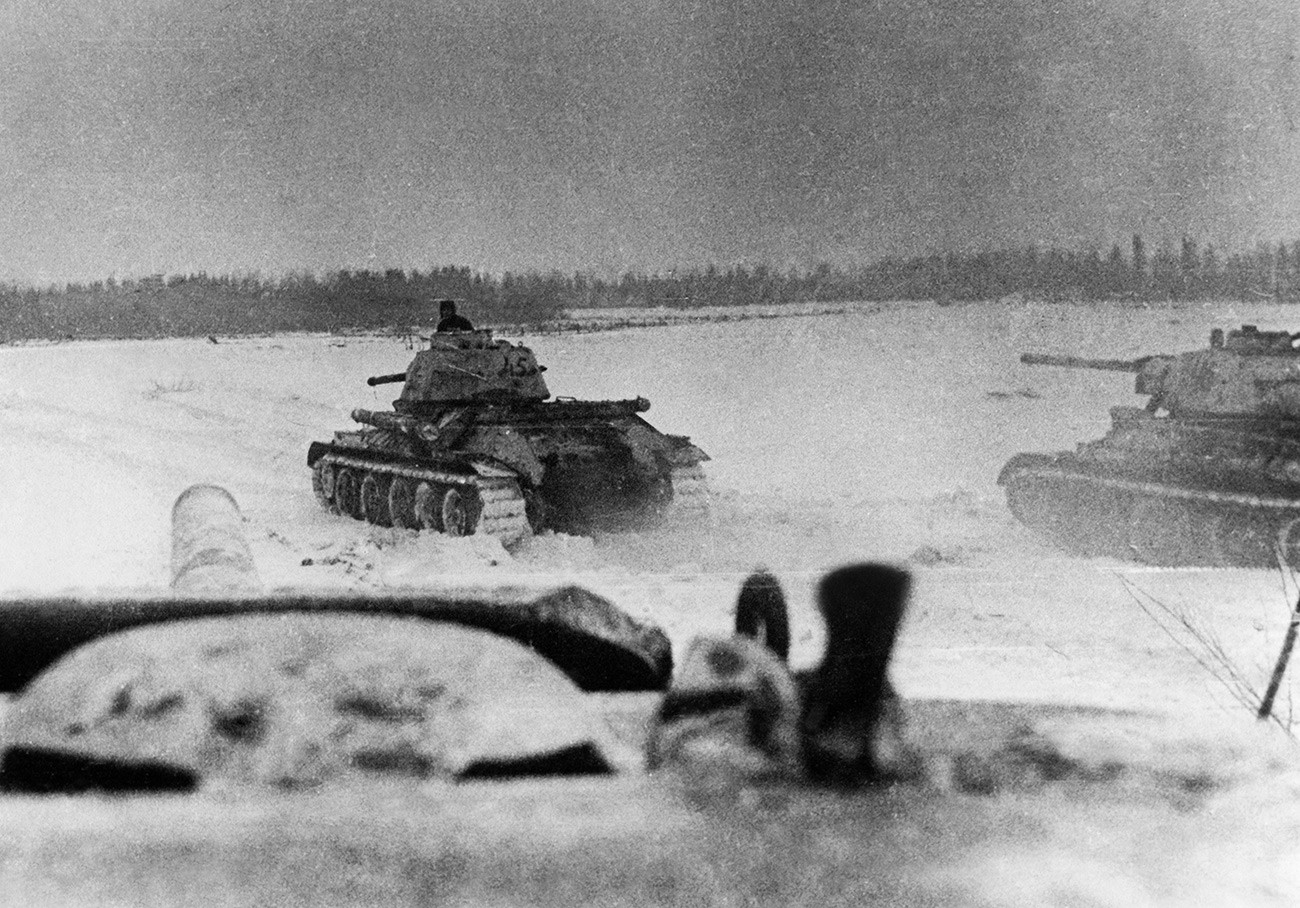 We’re accompanying the 170th Tank Brigade. We’ve teamed up with the tank crews. During the day they cover us, and at night the tanks are blind, so we act as their eyes and ears. They took the Khlebny and Petrovsky farms. At 5am the alarm sounded. The enemy had been spotted in the low-lying area between the farms. The remnants of the Italian 8th Army were escaping encirclement. As soon as the vanguard units drew level with us, the command went round the columns: “Crush them!” Our massive tank wedges struck from two flanks and literally pulverized the Italians into the ground. We followed and finished them off. I’ve never seen such a horrible sight. The white lime-camouflaged tanks were all red below the turrets, bathed in blood. On the caterpillar tracks there was a hand sticking out here, a piece of skull there...

We’re patrolling the ruined Stalingrad. Our troops have just divided the 6th Army into two groups. Now they definitely don’t have long left! In one building we found hundreds of saddles. Turns out the 1st Romanian Cavalry Division ended up in this cauldron. The krauts ate all the horses, had a right proper feast. 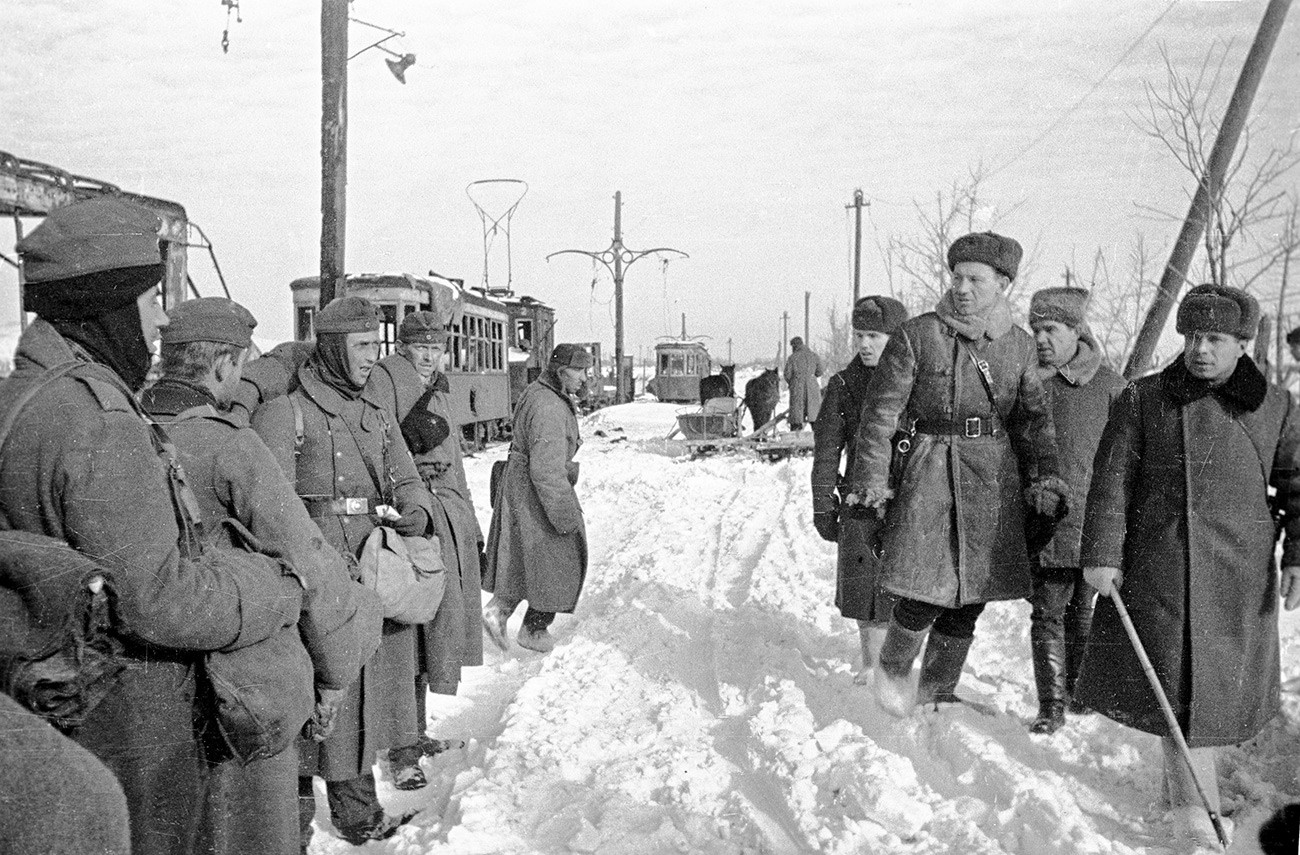 The enemy’s southern group in the city center surrendered along with Friedrich Paulus himself. The Germans are still holding out near the tractor plant. The streets are full of corpses. The basements are crammed with the wounded and those dying of cold and hunger. Our doctors help them as best they can. The soldiers walk among the ranks on the lookout for SS men (although there are very few) and traitor-defectors (the Germans call them Hiwis [Hilfswilliger — auxiliary volunteers]). They are made to lie on the freezing ground and get a bullet in the forehead.

The seemingly endless artillery fire suddenly stopped. It was followed by such a piercing unbearable silence that it hurt the ears. A joyful soldier came running over, shouting: “That’s it! The war’s over!” The German northern group had surrendered. Some cried, some laughed. Many were just silent. We knew that nothing was over. But Stalingrad had shown us something no one had dared to believe before — the Germans can be beaten! 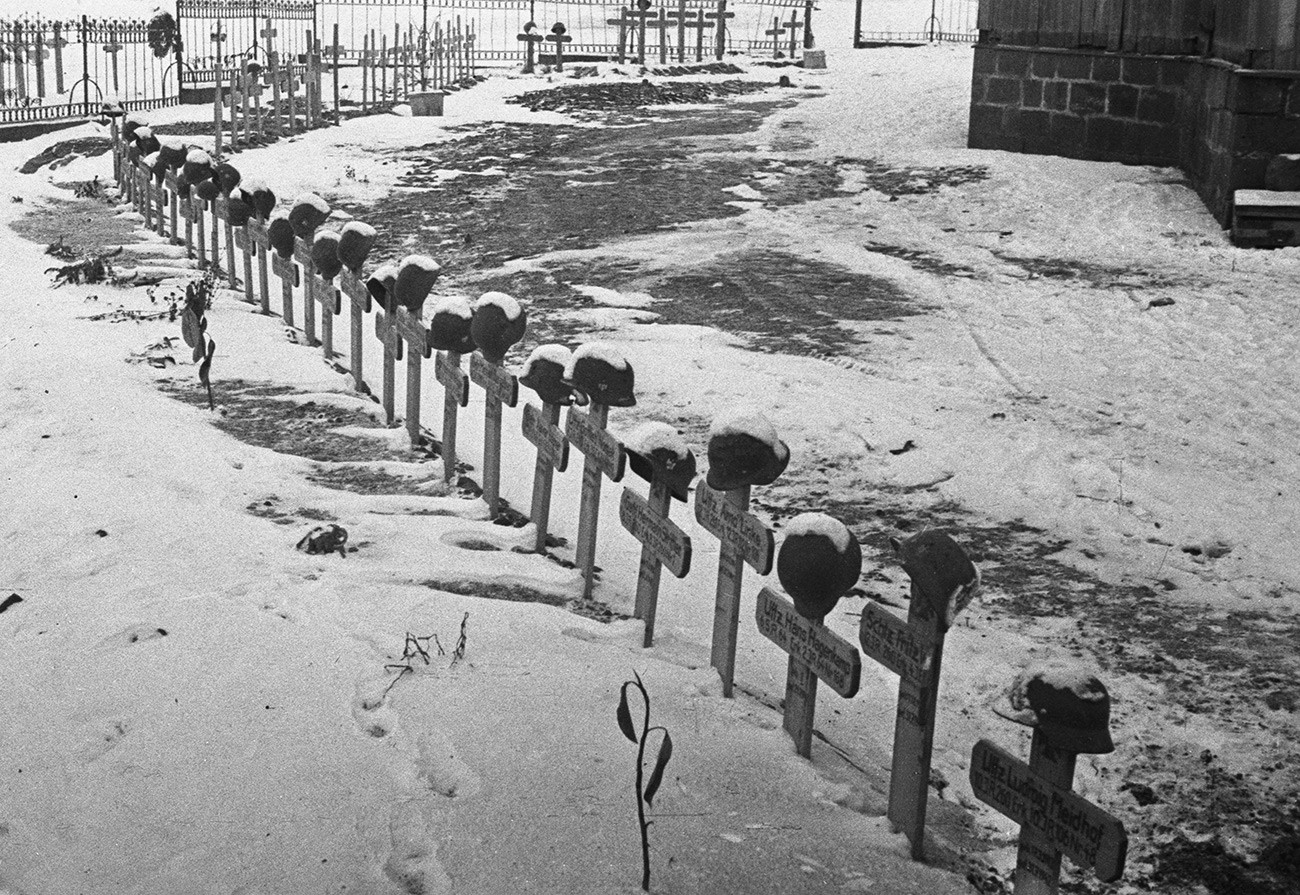 (Literary sources: A. Drabkin. I Fought at Stalingrad. Revelations of Survivors. Moscow, 2012; A. Isaev. Stalingrad. There Is No Land For Us Beyond the Volga. Moscow, 2018)