5 most important honors of the Russian Empire 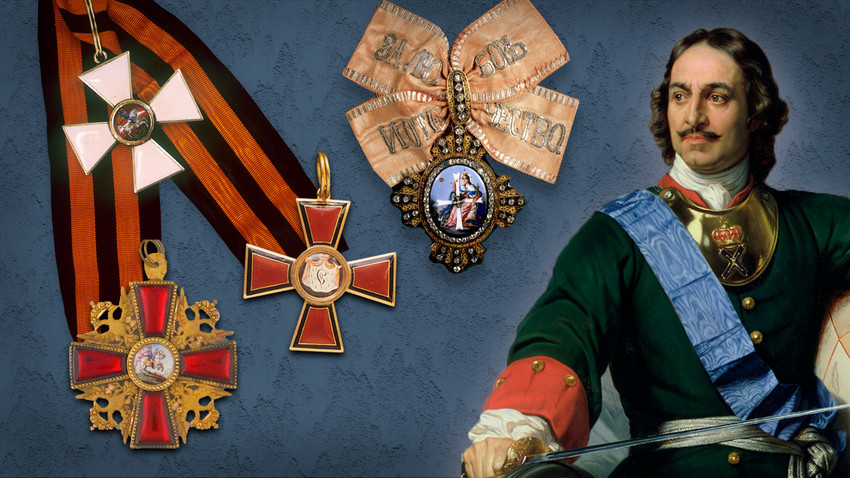 Kunsthalle Hamburg, Public domain, V. Lozovsky, A. Sverdlov/Sputnik.
Amazing pieces of jewelry design, the orders of the Russian Empire were, first of all, signs of high status and were reserved for only the noblest of the aristocracy.

Why would a country need a system of awards? Peter the Great knew the answer to this question. When he became the Russian tsar, he understood that Russia needed to take a giant leap forward in order to catch up with European competitors, and introducing a system of state awards was a very timely idea. 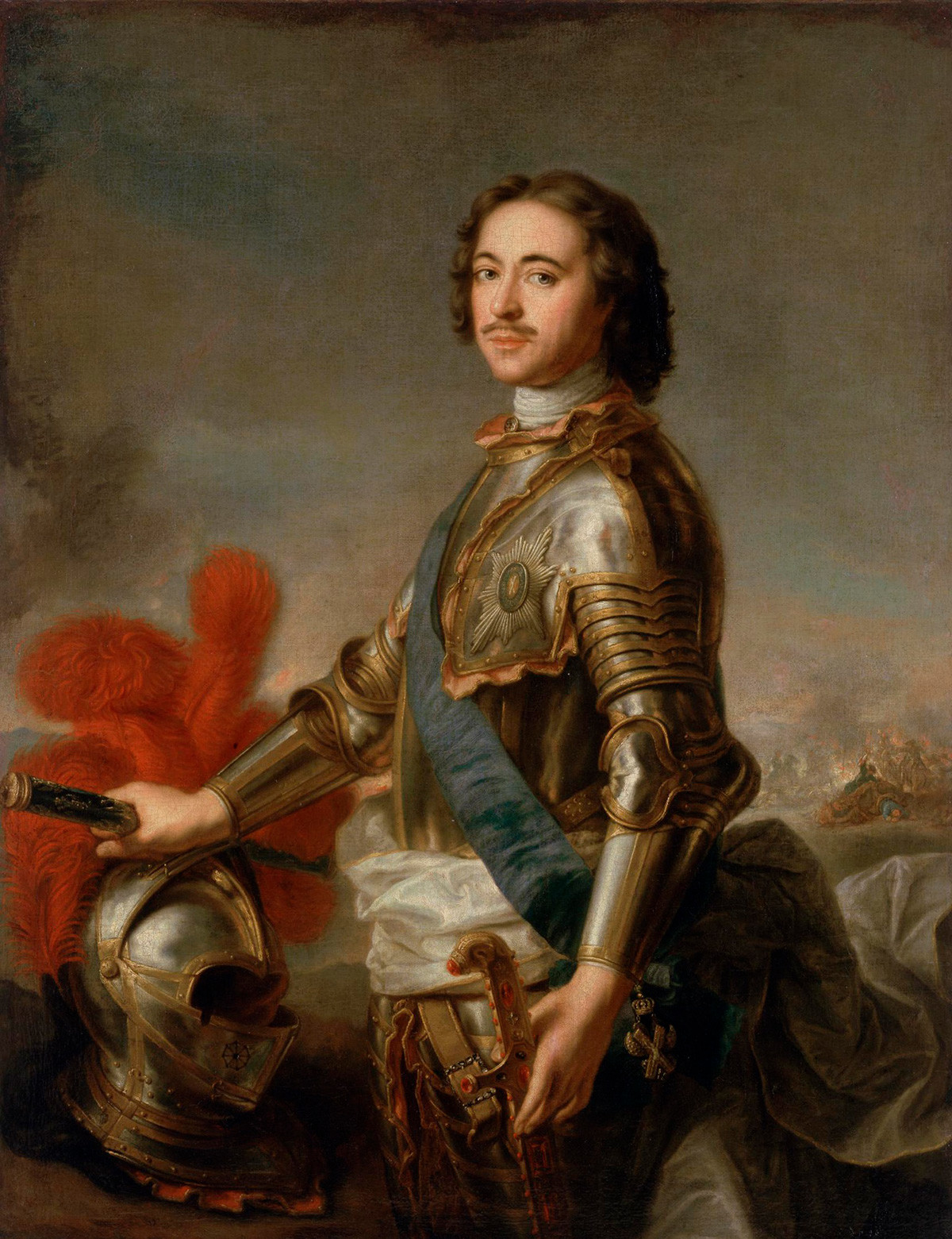 A system of state awards allowed the monarch to distinguish people by his own choice; an award could elevate a simple soldier into the higher ranks, or an award could help a nobleman be something more than an equal among equals. Peter introduced the first Russian order in 1698. All Russian orders were given out only by Emperors (except for the Order of St. Catherine, headed and given out by the Empresses).

1. The Order of Saint Andrew the Apostle the First-Called 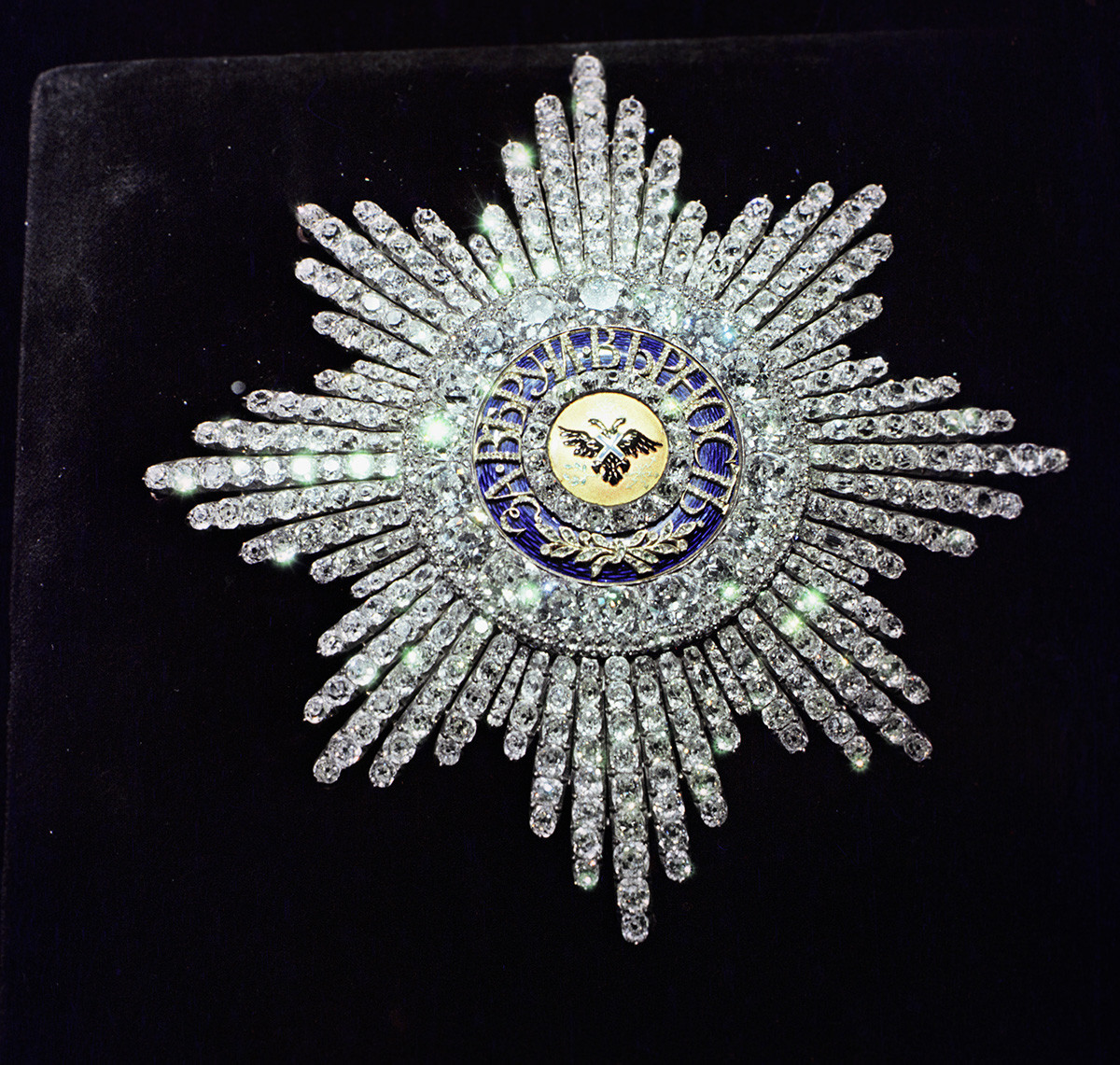 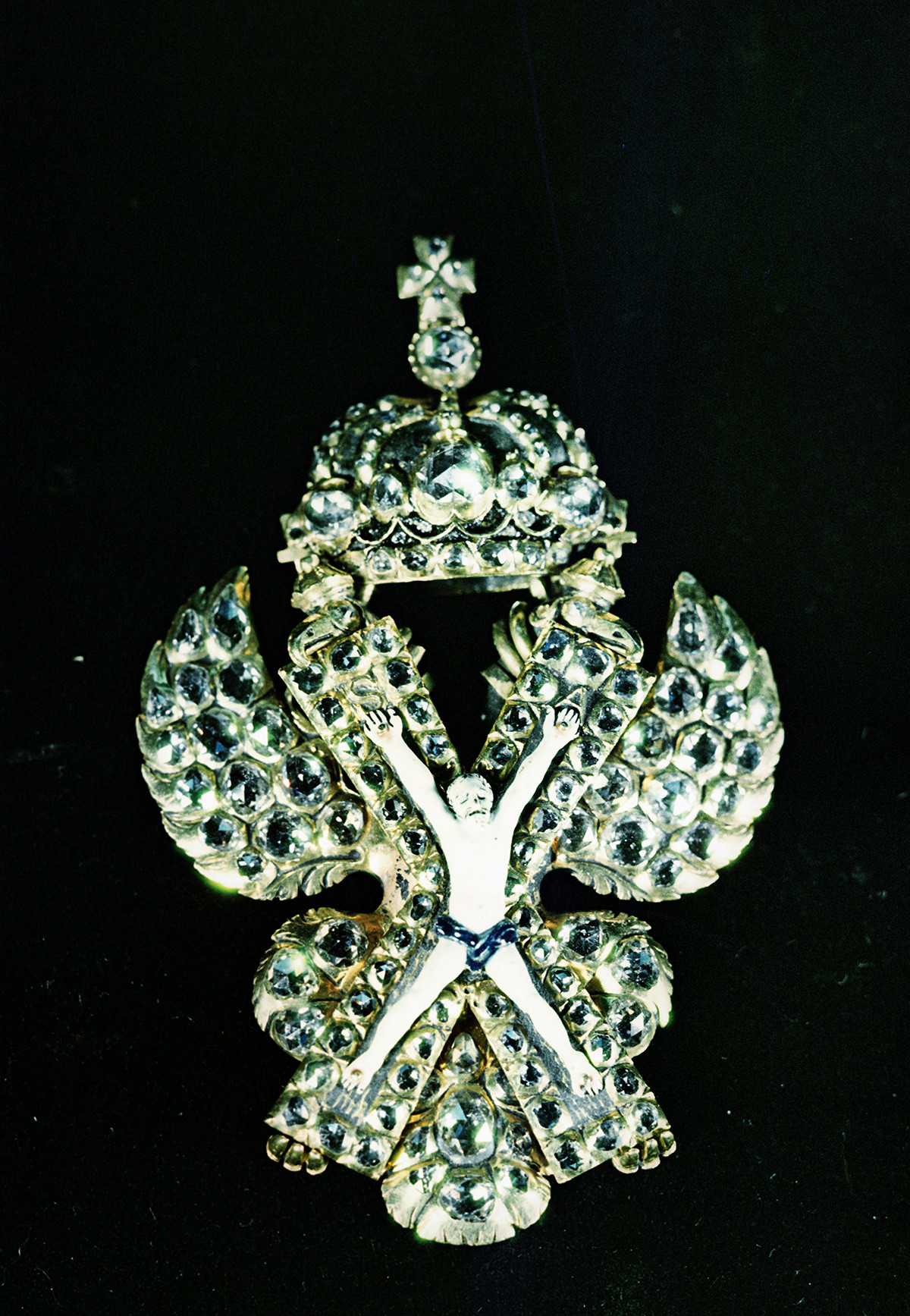 The Badge of the Order of St. Andrew.

For almost a century, the order had no statute. The order was bestowed in a single class and was only awarded for the most outstanding civilian or military merit. The insignia consisted of a badge (an enameled crowned black double-headed eagle) and an eight-pointed silver star with the motto "For Faith and Loyalty". The insignia of the order could be awarded "with diamonds" as a special distinction. After 1797, every Russian Grand Duke was awarded the Order upon his baptism, and Princes of the Imperial Blood were awarded it upon reaching 18. In total, there were from 900 to 1,100 knights of this order.

2. The Order of Saint Catherine 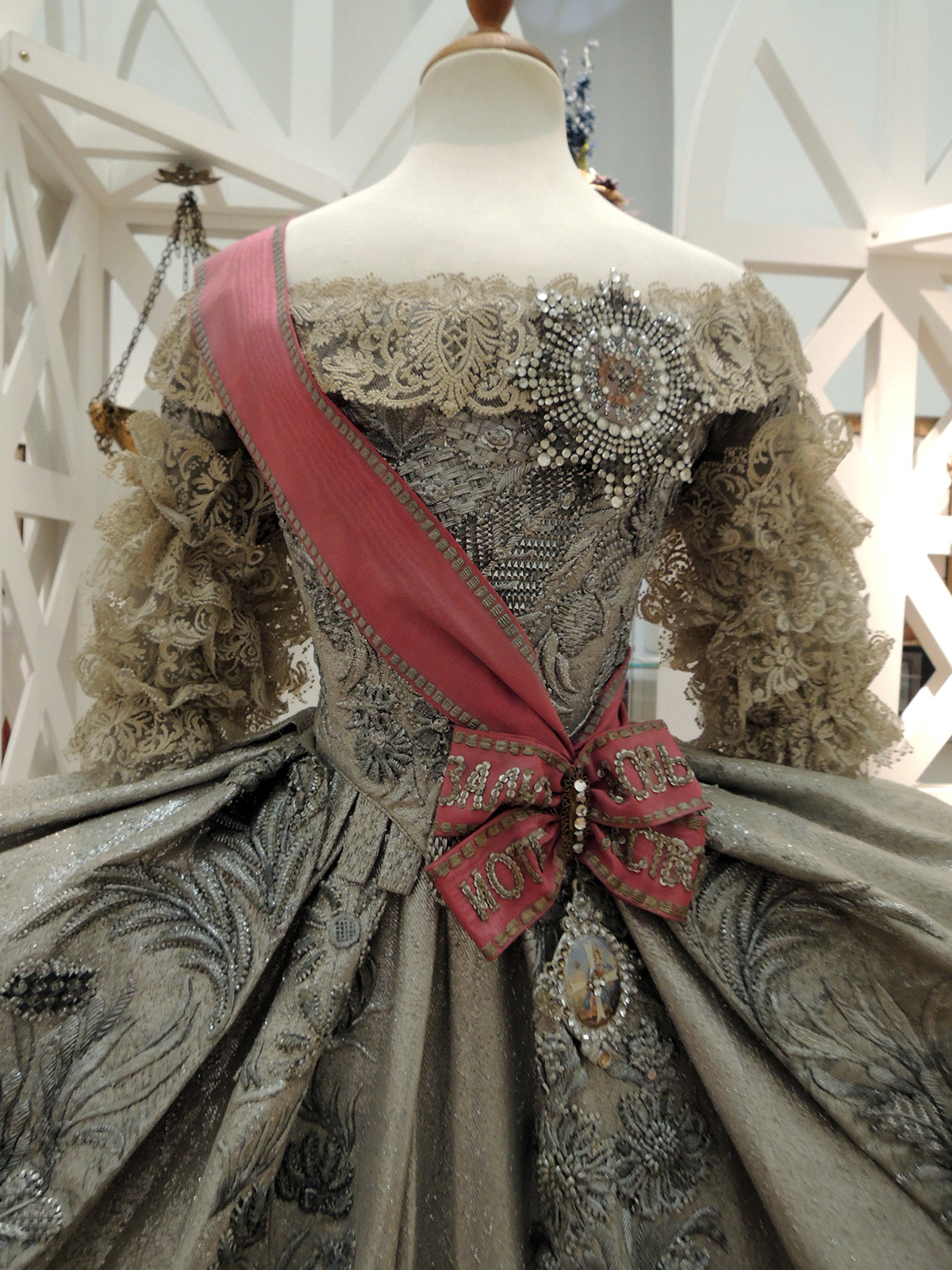 A replica of Catherine I's wedding dress, decorated with a Star and a Badge of the Order of St. Catherine.

The Order was historically the second Russian award, established by Peter the Great in the name of St. Catherine, the patron saint of his wife, Catherine I (1684-1727). In 1711, Peter took Catherine, then, his fiance, along with him to the unsuccessful Pruth river campaign, in what is now an area spanning the border between Romania and Moldova. Although Catherine was pregnant at the time, she heroically bore the hardships of the campaign, which awed Peter and his generals alike. The order was formally inaugurated 24 November 1714, the day when Peter and Catherine were married. 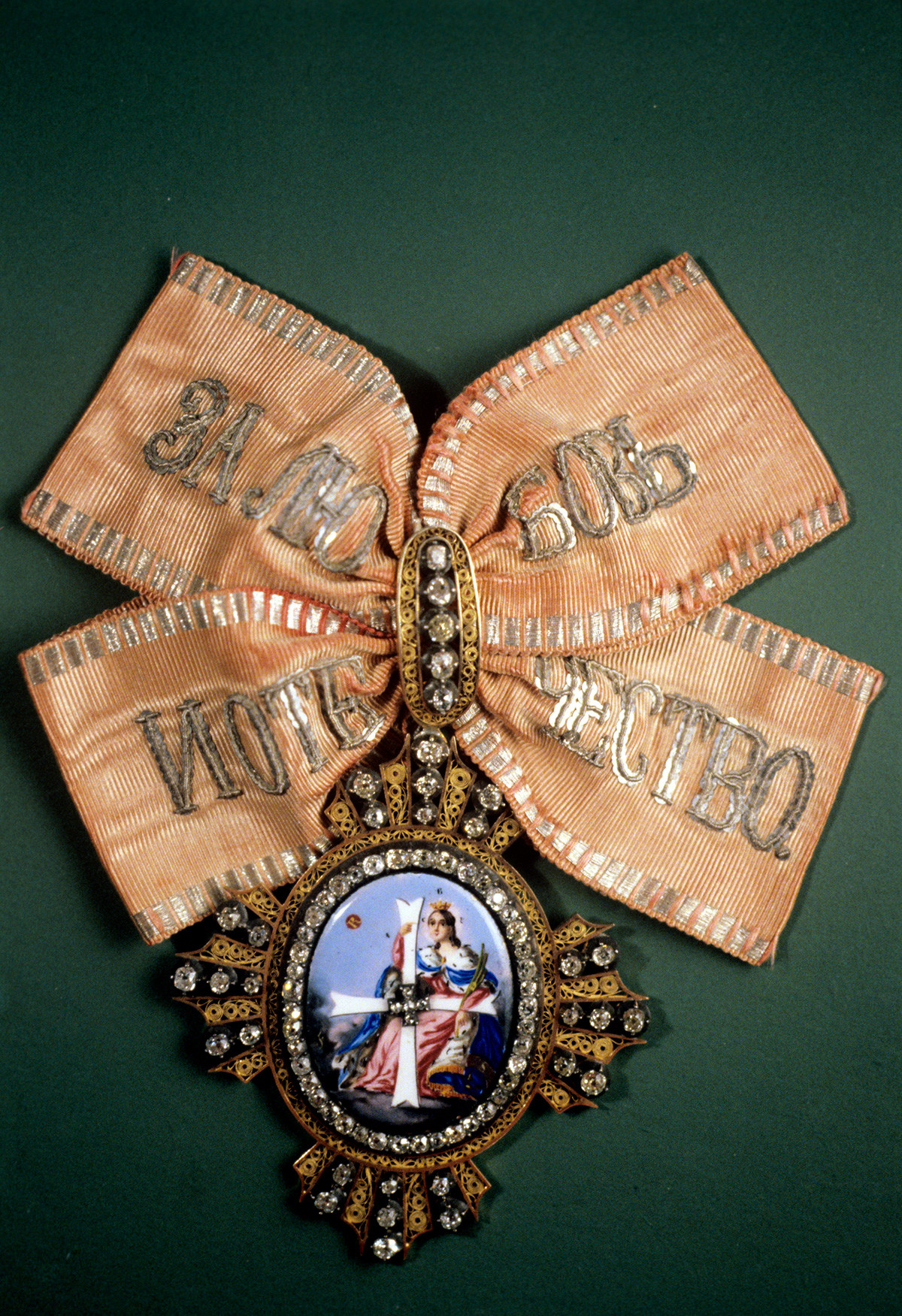 The badge of the Order of St. Catherine.

This order was meant only for women and was bestowed in two classes: Dame Grand Cross (entitled to both the badge and the star), and Dame Lesser Cross (only the badge). The order’s motto was “For Love and the Fatherland.” Dames who were bestowed with this order, also, as in the case with the Order of St. Andrew, paid a compulsory toll: 400 rubles for holders of the Dames Grand Cross and 200 rubles for the Dames Lesser Cross. All funds went to charity. Every Russian Grand Duchess was conferred the Grand Cross of the Order at her christening (or marriage into the Romanov family), and Princesses of the Imperial Blood were awarded at 18. The order was bestowed on 734 dames in total.

3. The Order of Saint George 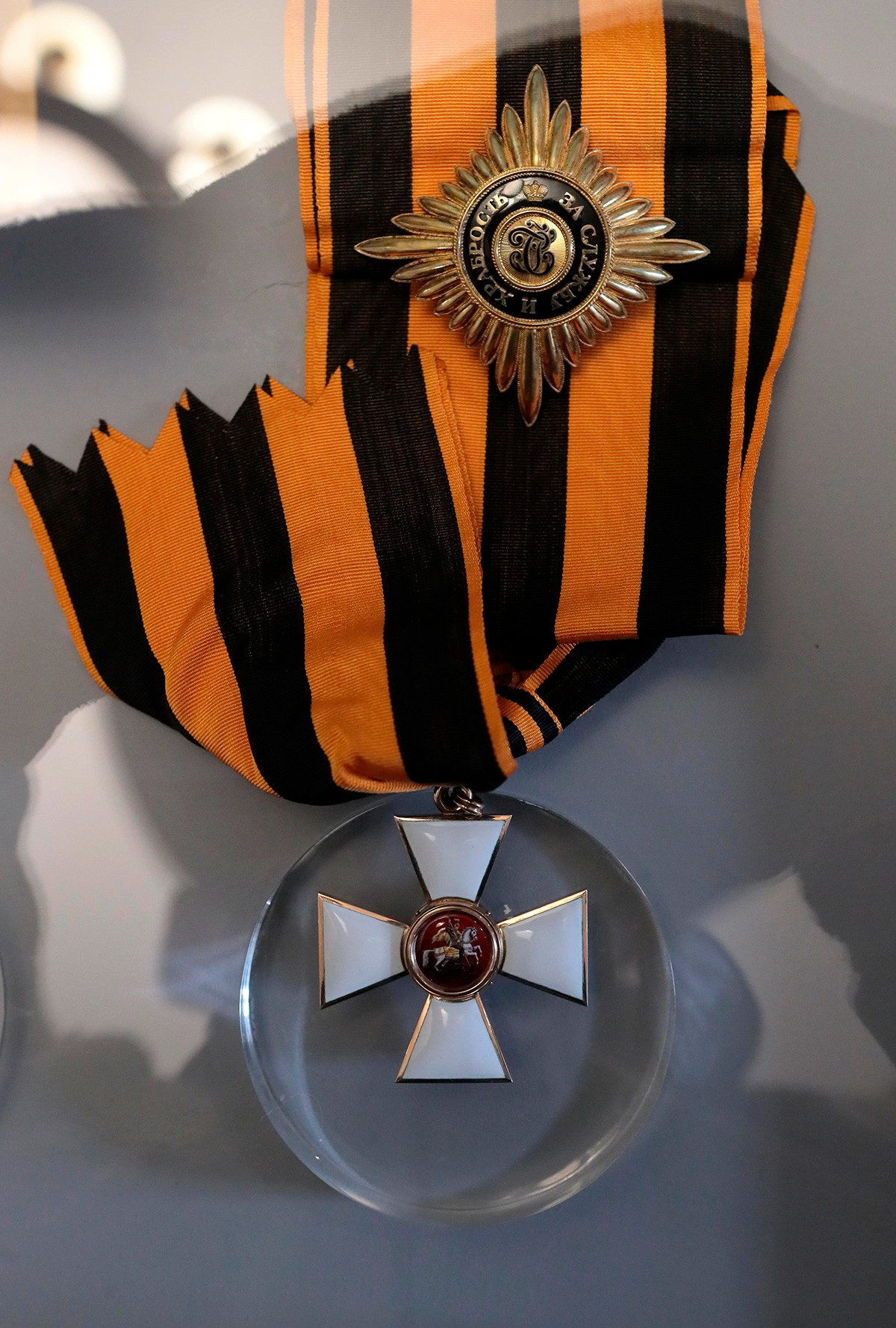 The Star and the Cross (Badge) of the Order of St. George, 1st class

The Order of Saint George was the highest military award of the Russian Empire. Established by Catherine the Great (1729-1796) in 1769, and was meant strictly for awarding personal military prowess on the battlefield. The order, its statute said, was awarded “to those who did not only fulfill their duty… but also distinguished themselves with some exceptionally courageous deed… This order is to be worn constantly.” 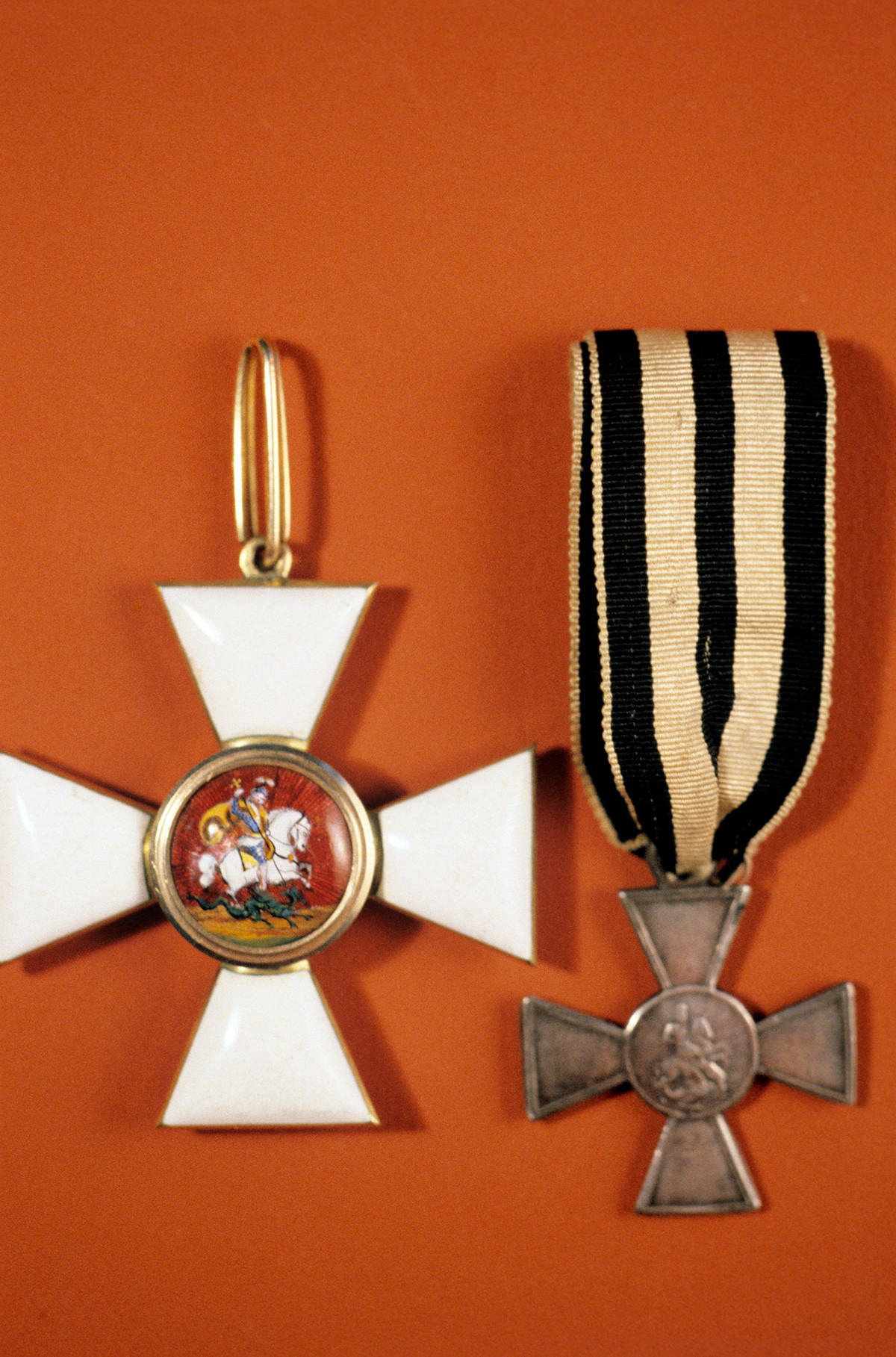 The Order of Saint George is divided into four classes, the highest degree being the First Class. The insignia are the cross, the star, and the ribbon. The Cross is a white enameled ‘cross pattée’ with a central medallion bearing the image of Saint George. The star is a four-pointed silver star with the letters "SG" surrounded by a black enameled band bearing the motto of the order – "For Service and Bravery." The ribbon is orange with three black stripes, it symbolizes fire and gunpowder, the Russian "colors of military glory." 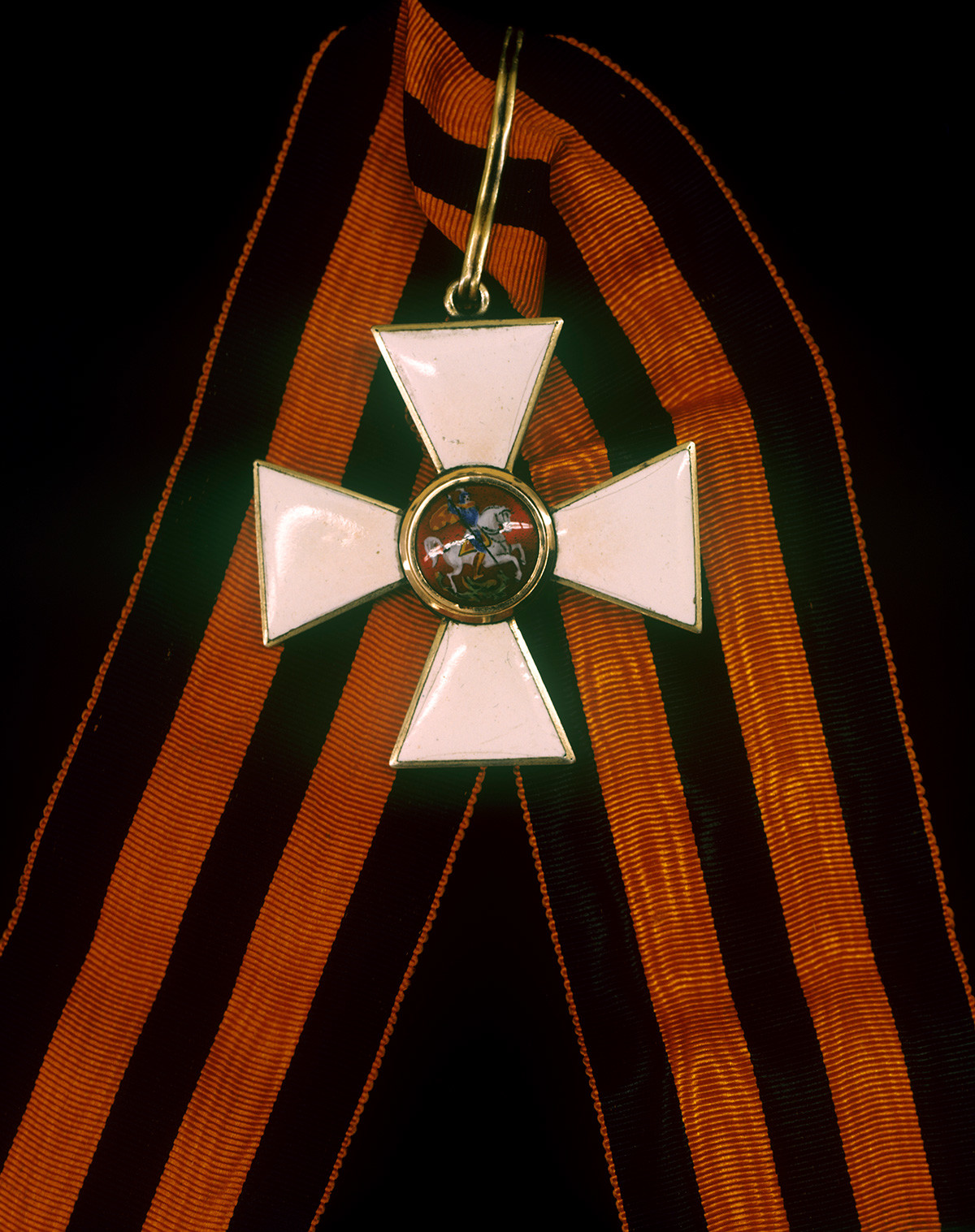 The Cross (Badge) of the Order of St. George, 1st Class

Since 1845, all classes of the order granted the rights of hereditary nobility to its knights. Over 10,000 people were awarded different degrees of the Order, although until 1807 it was only meant for officers. In 1807, a special “sign of distinction” in the form of a St. George’s cross was established, to decorate especially courageous soldiers (it didn’t grant nobility, though). Although formally, the Order of St. George was lower than the Order of St. Andrew in the Russian Orders’ hierarchy, but for military men, it was the most cherished honor.

4. The Order of Saint Vladimir 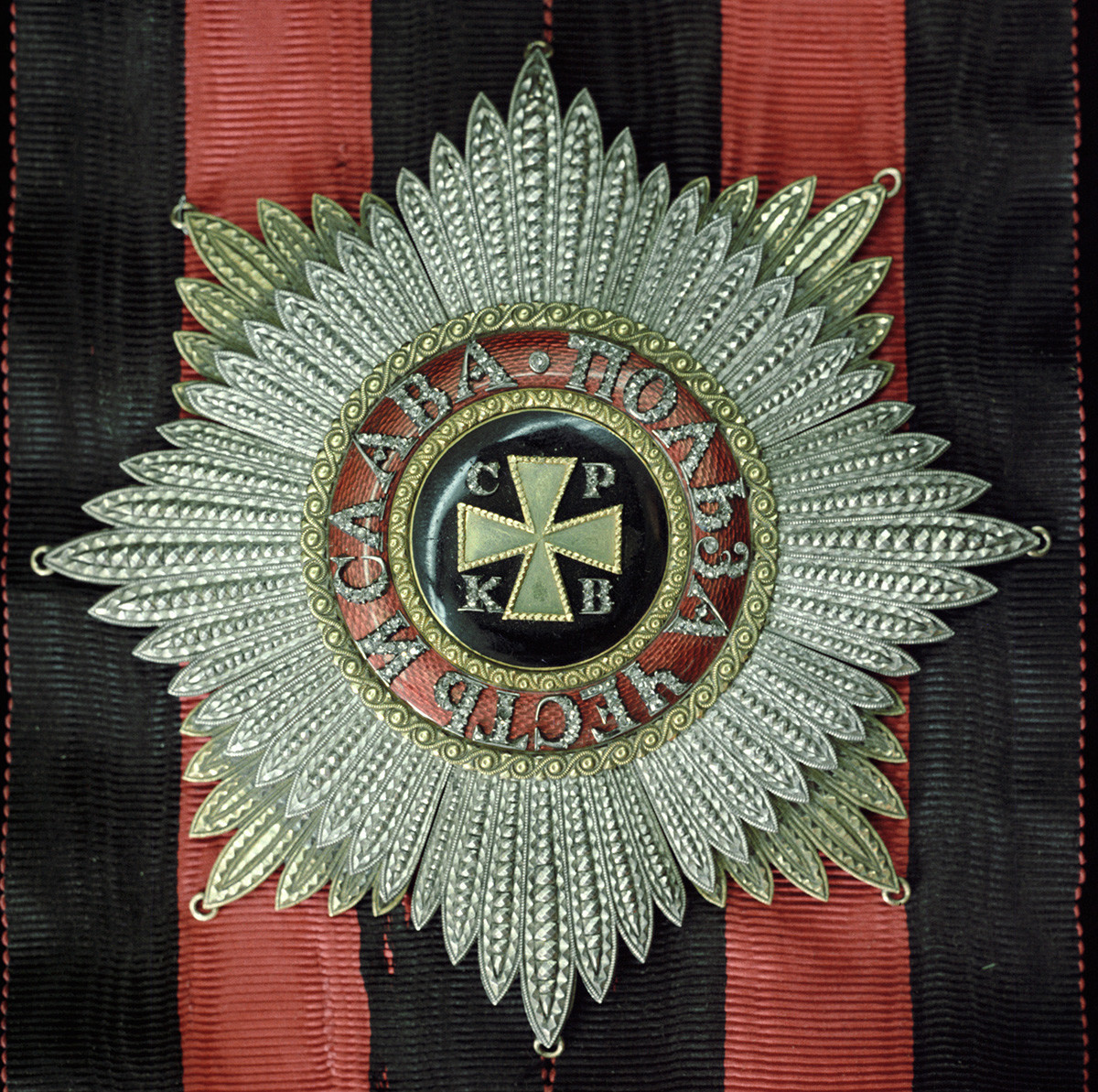 The Star of the Order of Saint Vladimir, 1st class.

Established in 1782 by Empress Catherine the Great in memory of the deeds of Saint Vladimir, the Baptizer of Rus’, this order was meant for both military and civil servants of the Empire. The order had four degrees, the highest being the First Class, and was awarded for continuous service. Its 4th class could be also awarded for outstanding contributions to charity, or for 35 years of flawless service. The order’s motto was “Benefit, Honor and Glory." The order’s insignia included a red enameled cross with black and gold borders and a gold-and-silver eight-rayed star, worn in different sizes according to the class. The order’s ribbon was black and red. 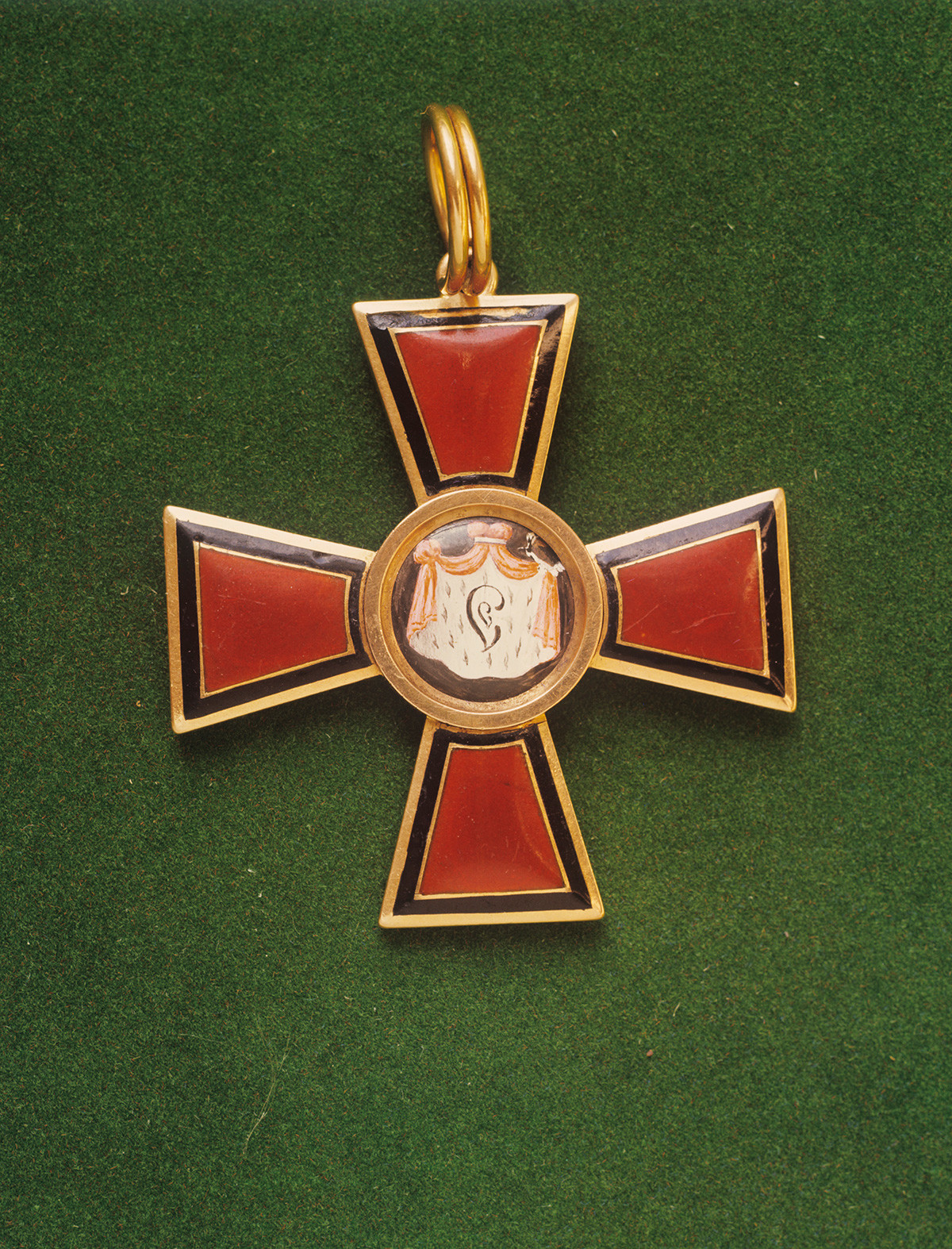 The Cross (Badge) of the Order of Saint Vladimir, 1st class.

All classes of the order granted the rights of hereditary nobility to its knights. But at the end of the 19th century, it turned out that the 4th class has been awarded for charity to many merchants and manufacturers, who then became “fake” noblemen. Since 1900, the 4th class only granted the right to personal nobility, which could not be inherited by the knight’s children. The order was bestowed on more than 10,000 people.

5. The Order of Saint Alexander Nevsky 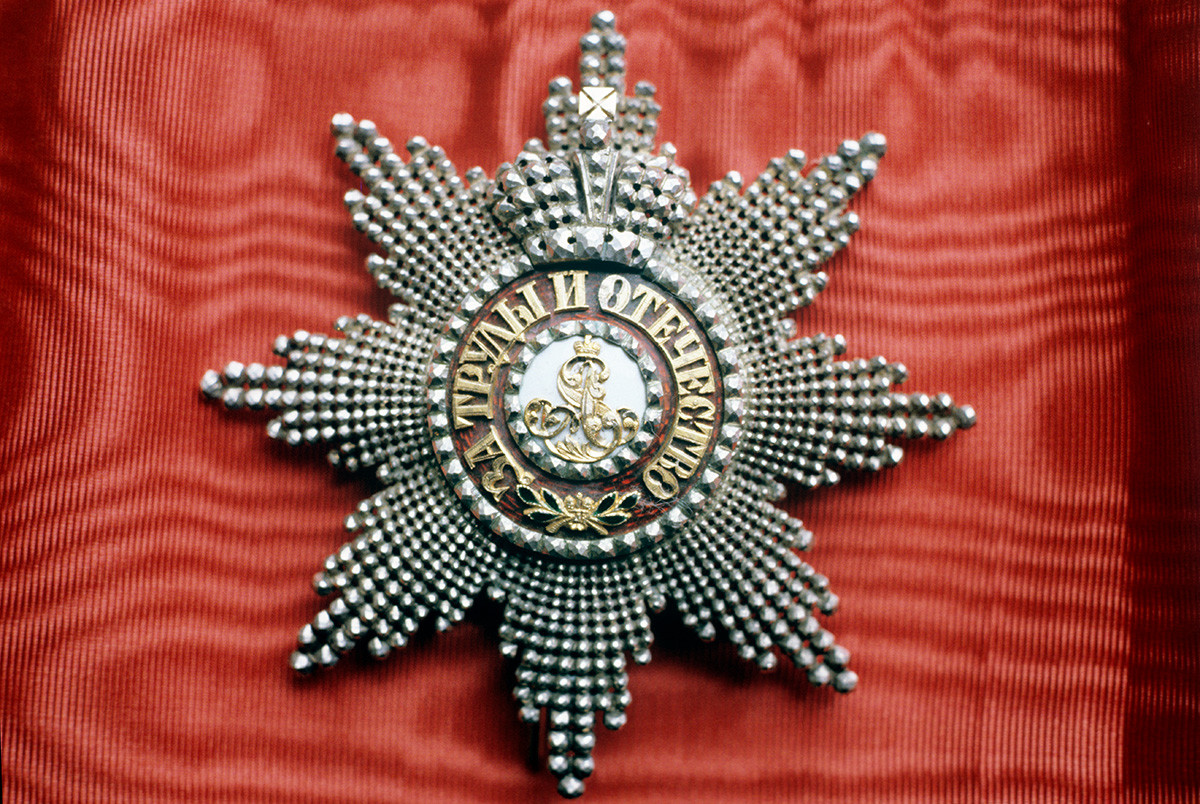 The star of the Order of Saint Alexander Nevsky

This order was originally conceived by Peter the Great for rewarding bravery in battle. But the first Emperor died sooner than he could create it, so it was established by his wife, Empress Catherine I, in 1725. Alexander Nevsky (1221-1263), the Russian prince who defended the lands of future St. Petersburg against Swedish and Lithuanian invaders, was canonized in 1547 and later, his remains were interred in St. Petersburg’s Alexander Nevsky Lavra by Peter the Great himself. So, initially, the order was meant to award great feats in war and diplomacy. 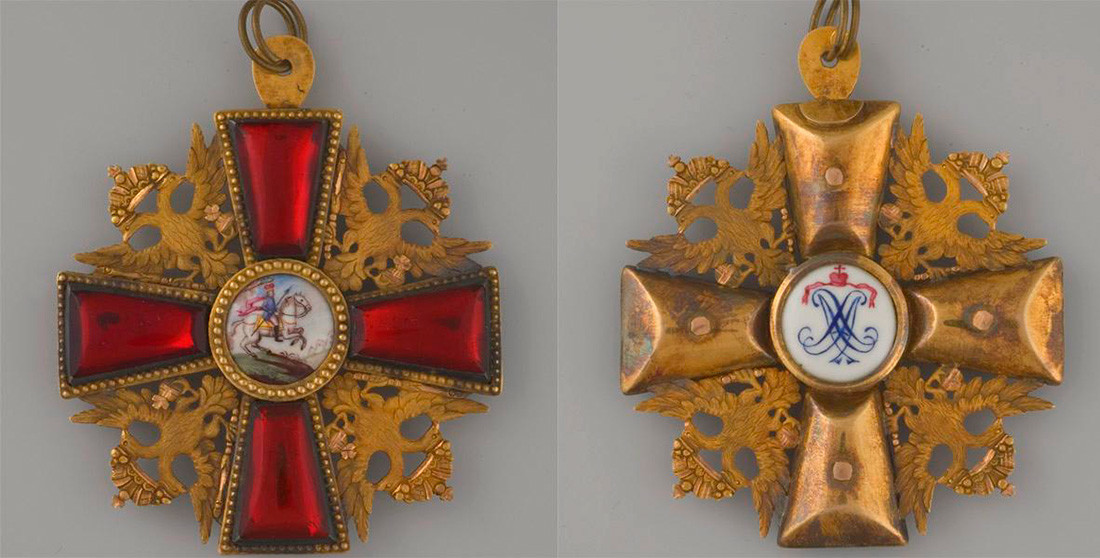 The Cross (Badge) of the Order of Saint Alexander Nevsky, front (L) and back (R)

But, the order was first awarded on the occasion of the wedding of Grand Duchess Anna Petrovna of Russia (1708-1728) and Charles Frederick, Duke of Holstein-Gottorp (1700-1739) on June 1st, 1725. 18 people received the order that day, and on September 21 more people received it. The order quickly fell in importance behind the ‘main’ orders of St. Catherine and, moreover, St. Andrew.

The order first received its official statute only in 1797. The order existed in a single class. The motto was "For Labor and the Fatherland." The insignia included a red enameled cross with four golden eagles, a silver star with the order’s motto, and a crimson red ribbon. In total, 3,674 persons were decorated with this order.