What did Peter the Great keep in his treasury? 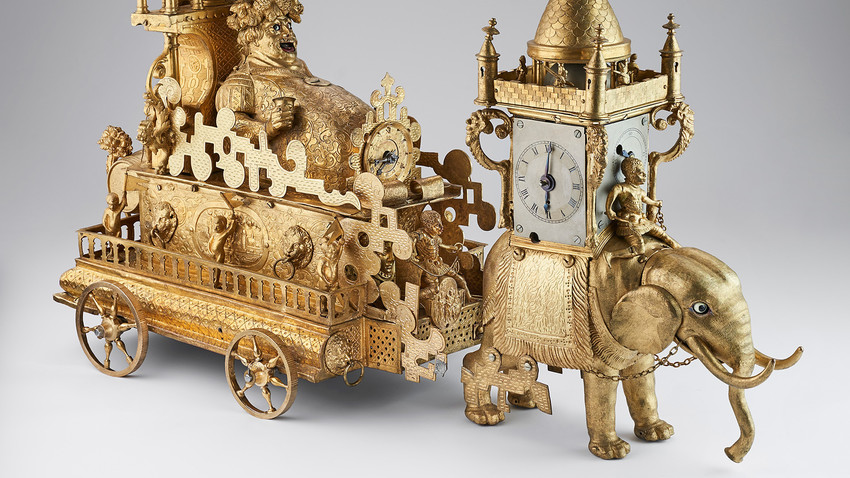 Moscow Kremlin Museums, State Hermitage
Peter the Great was the first of the Russian tsars who began collecting pieces of art; precious, interesting, and peculiar things, not only for his own amusement but also for the glory of his country. The collections Peter comprised during his extensive travels laid the foundation of what is now the Hermitage and the Moscow Kremlin museums.

1. Decoration with a portrait of Peter the Great in a crown 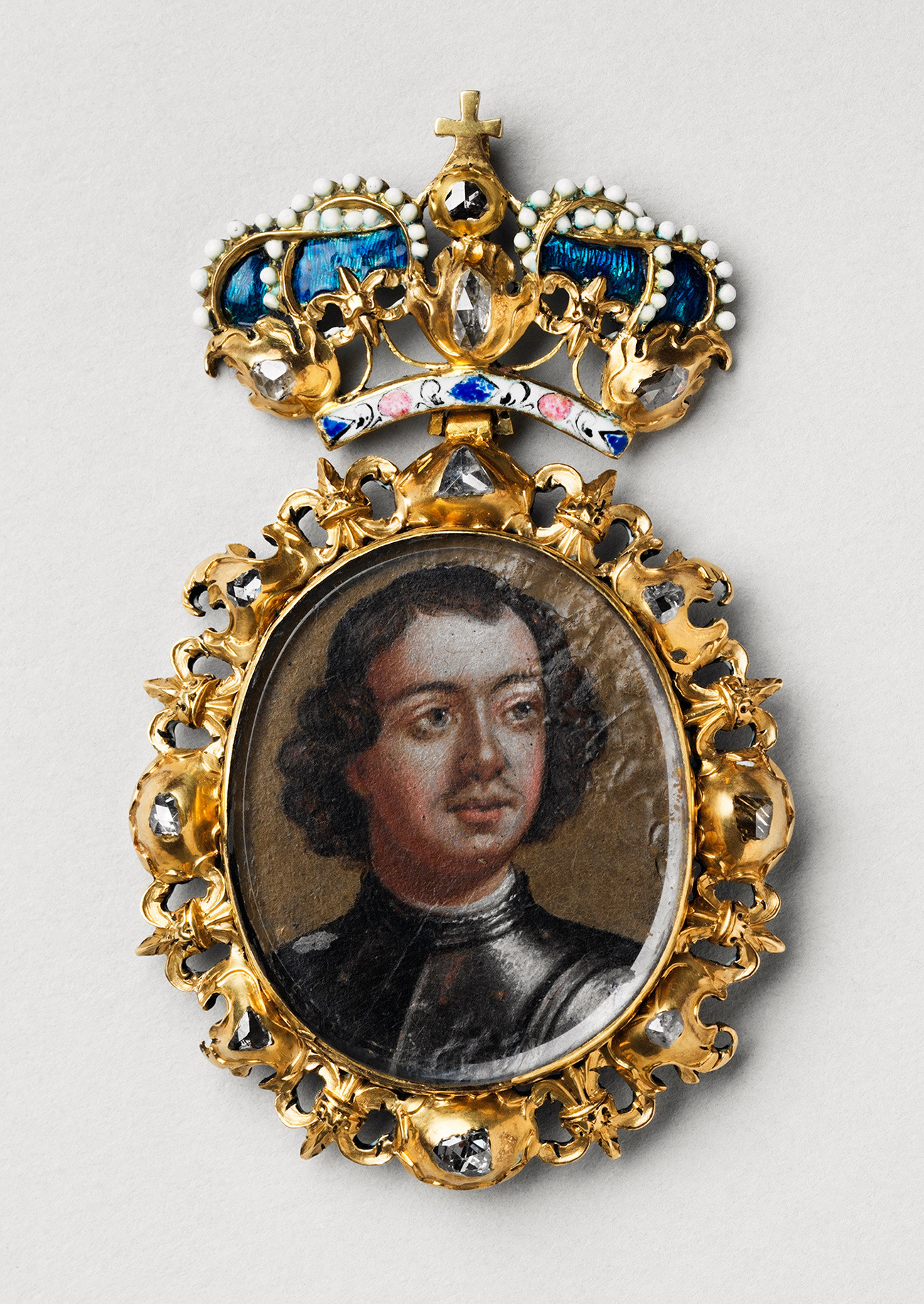 Under Peter the Great, the European practice of giving out medallions and decorations with the monarch’s portrait, as a sign of the tsar’s benevolence, came into use in Russia. 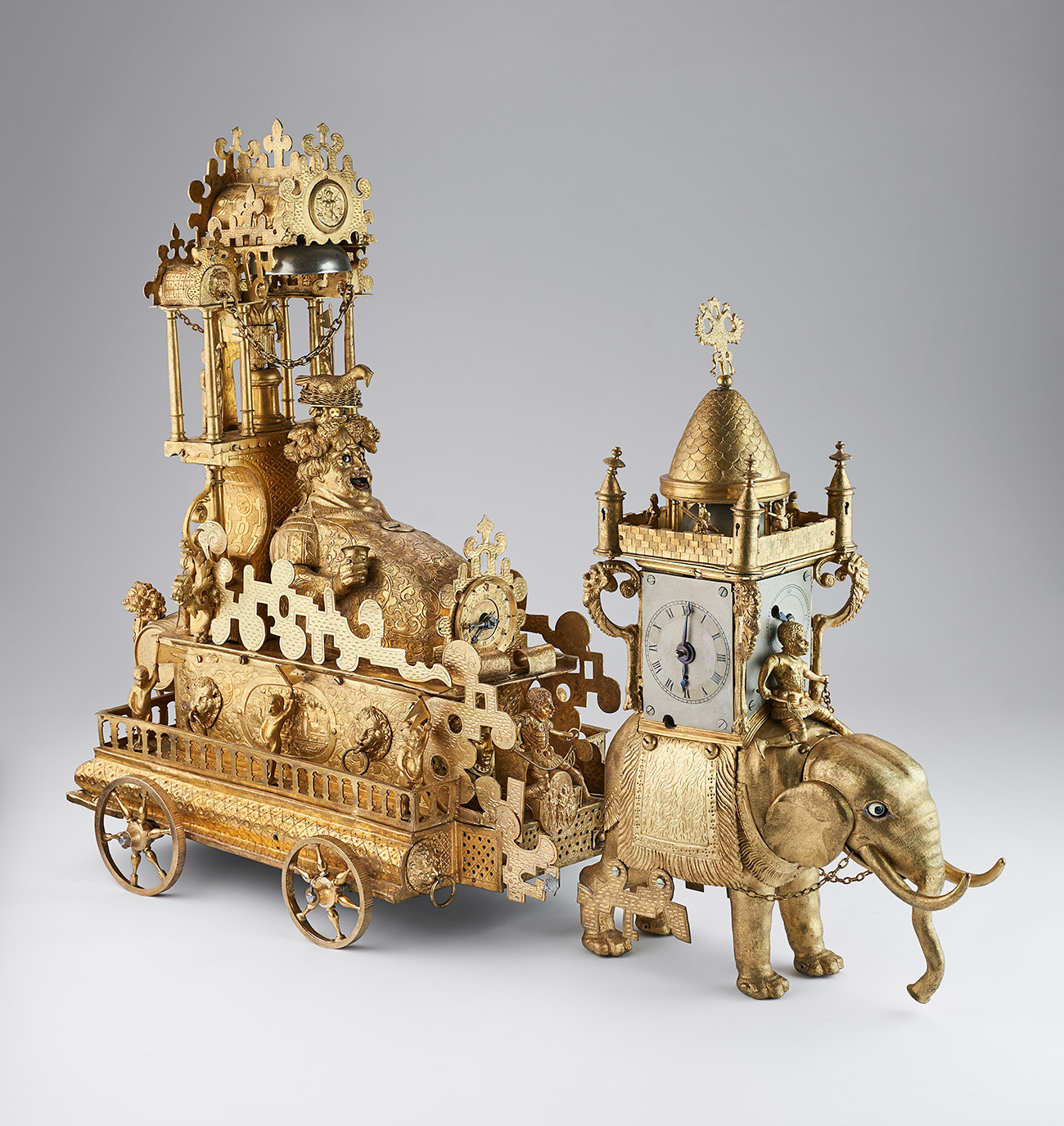 This clock, made in Augsburg in the 16th century, was probably a gift to Ivan the Terrible. 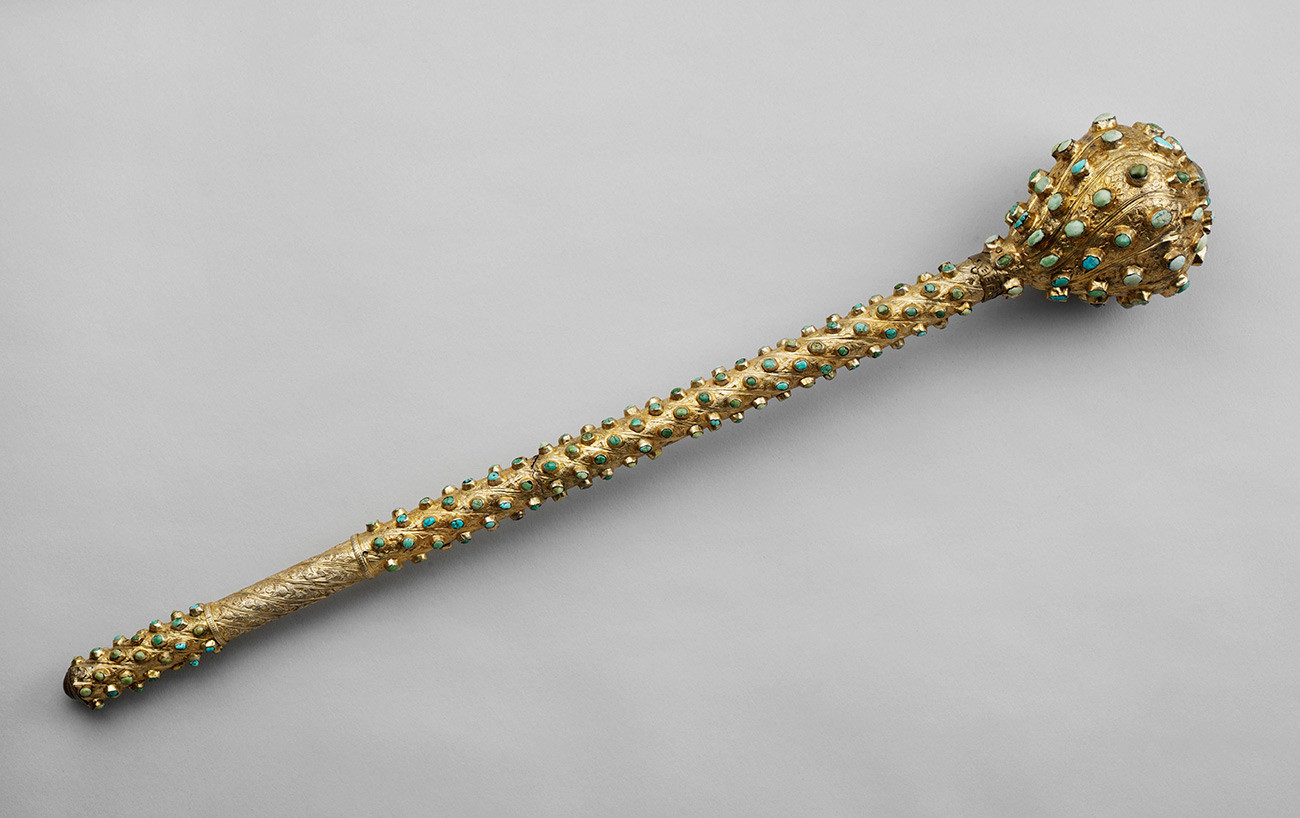 This ceremonial mace belonged to Ivan Mazepa, who betrayed Peter the Great and defected to the Swedes. The mace was most likely seized after the Battle of Poltava (1709). 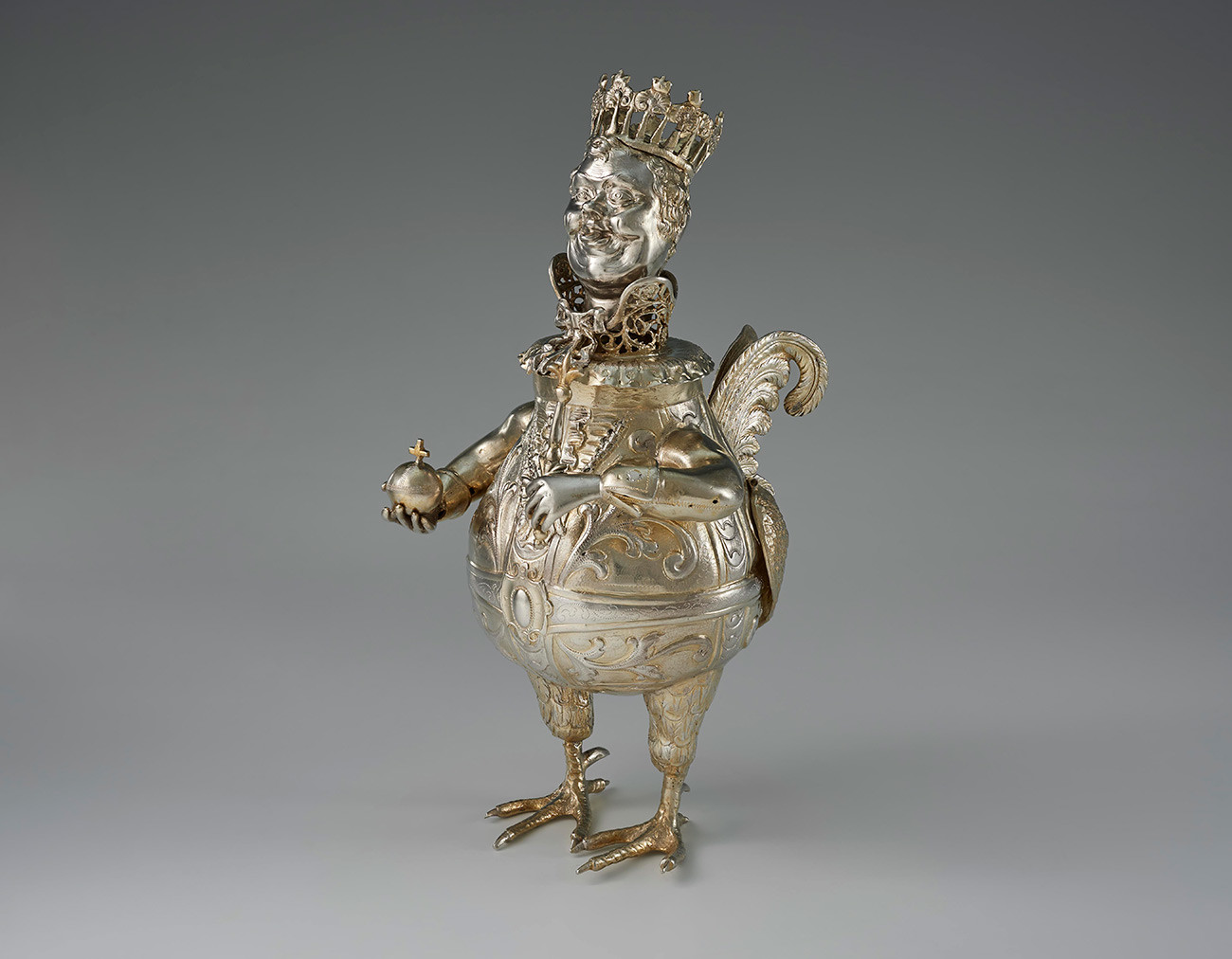 The ‘amusement cups’ were popular among the European nobility and loved by Peter the Great, who had an array of ‘amusement’ tableware in his palaces in St. Petersburg. This is one of them. 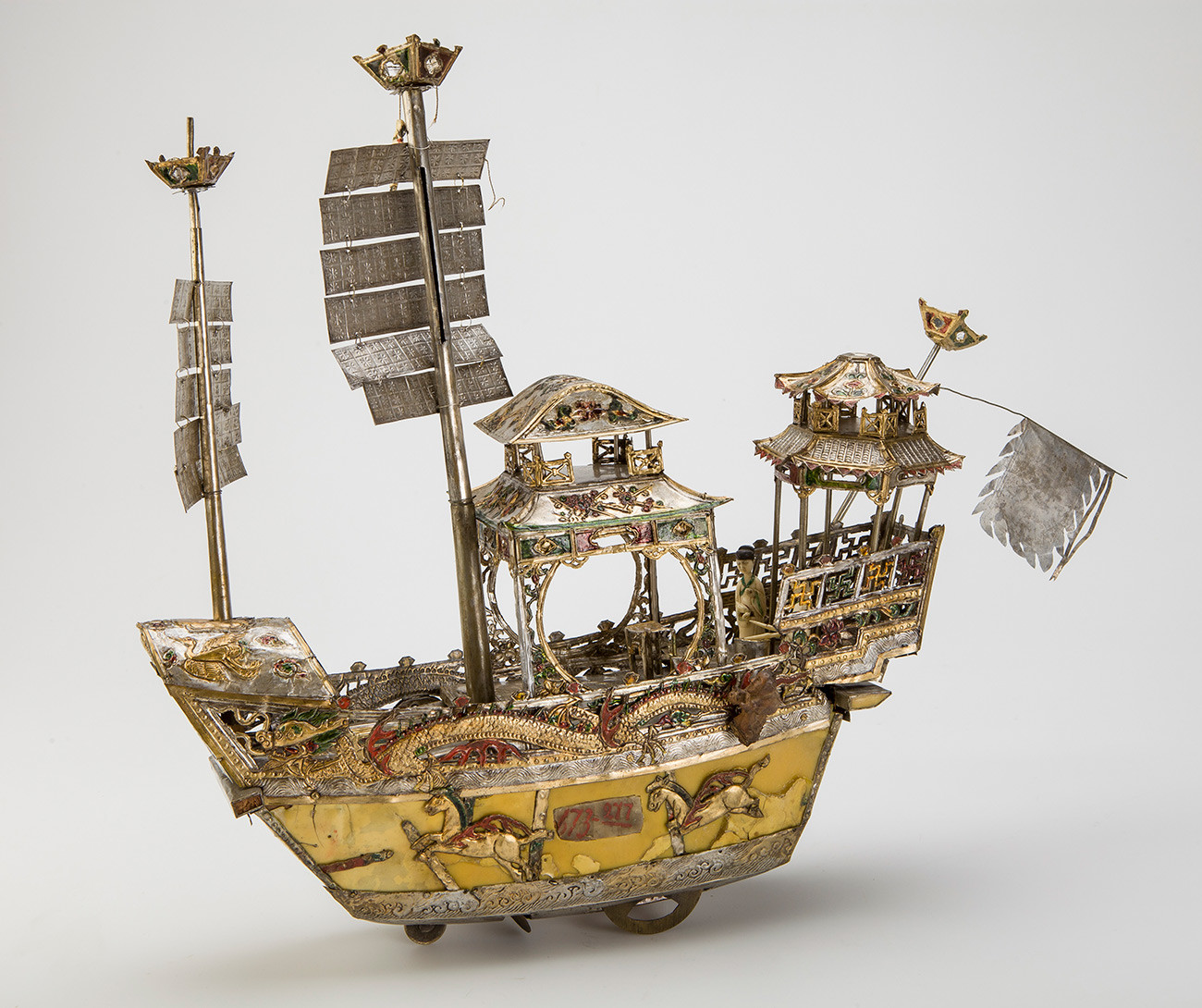 Peter the Great Museum of Anthropology and Ethnography

This wonderful Chinese toy still works to the present day – it moves linearly and makes turns, while the toy musicians play their instruments, and the crew members ‘drive’ the boat! (A movie about the boat’s operation can be seen at the exhibition.)

6. Openwork clock in a double body 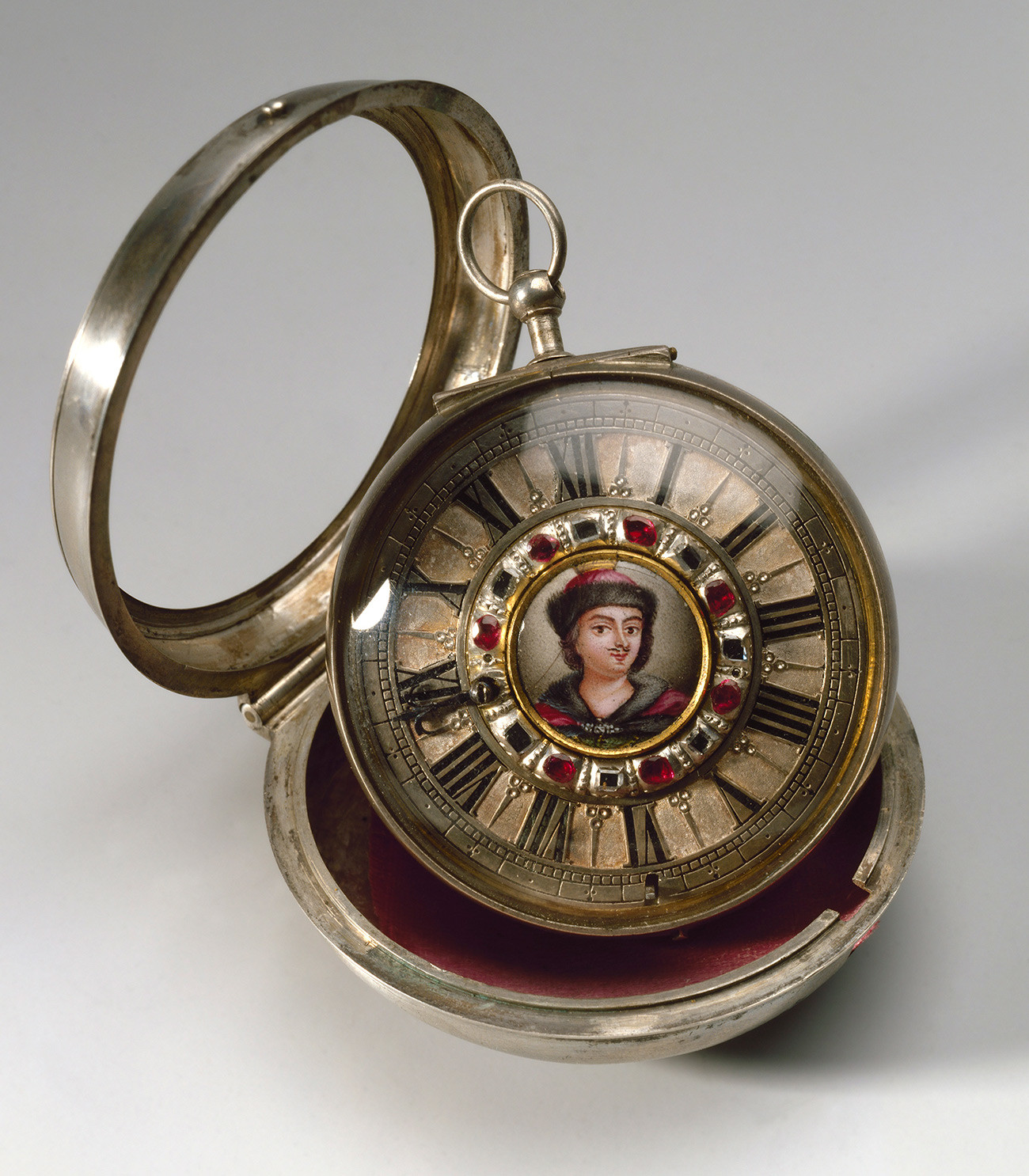 This clock must have been made for the occasion of Peter the Great’s visit to London during his Great Embassy of 1697-1698 and accepted by the tsar as a gift. 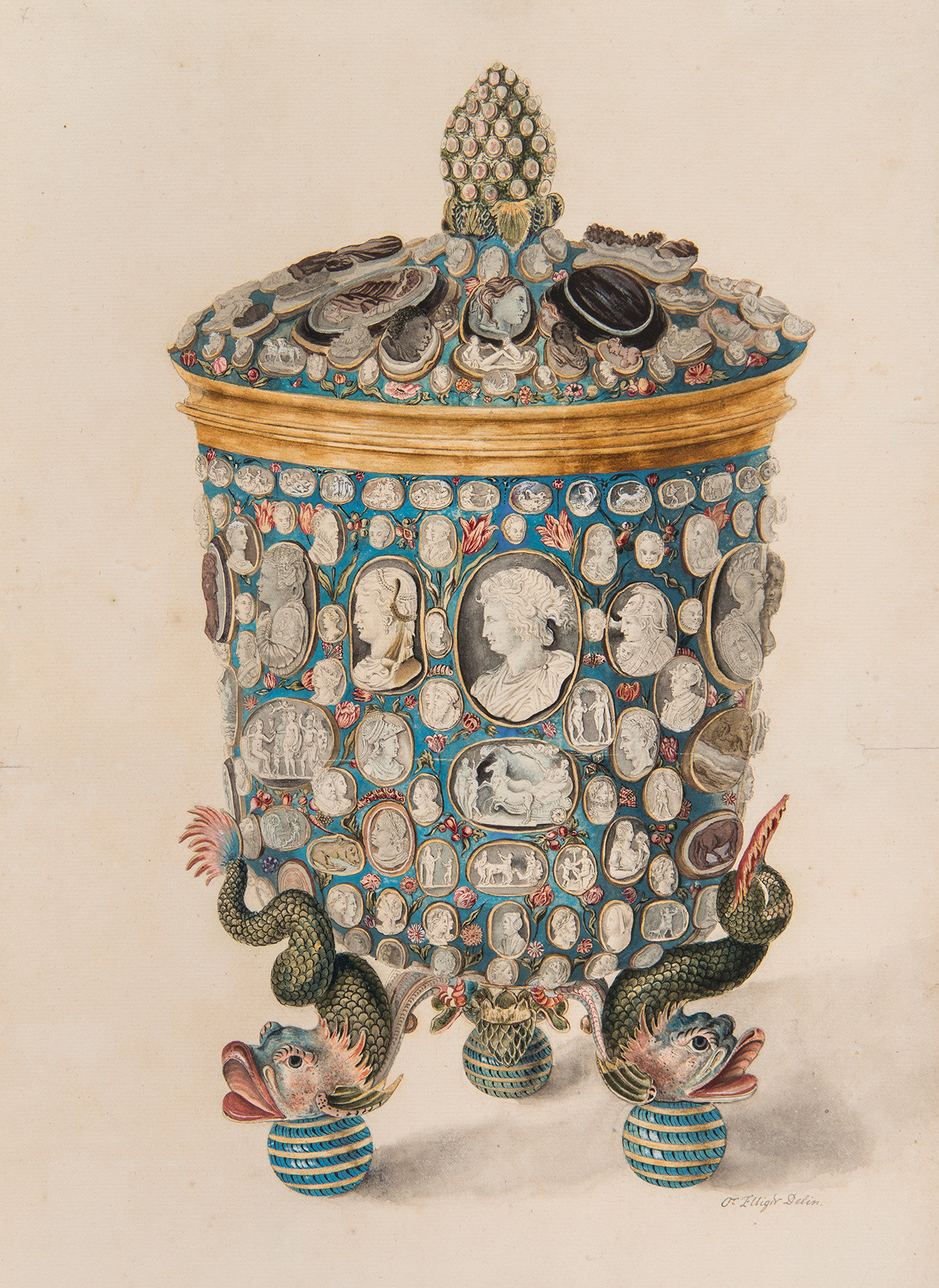 This is a watercolor painting by Ottmar Elliger the Younger (1666–1735), a Dutch painter from Germany. 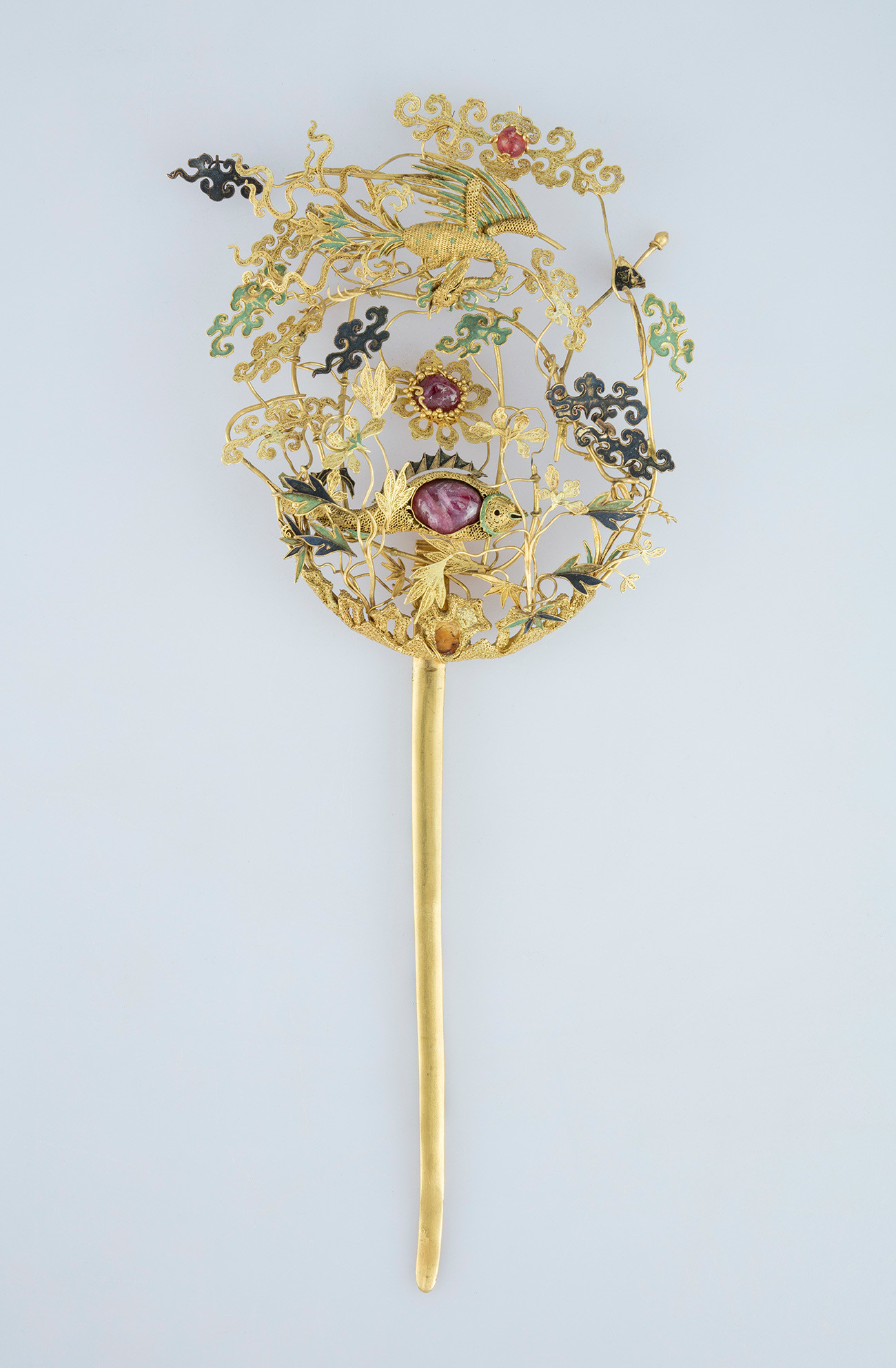 Another beautiful piece from Peter’s Chinese collection; this pin was probably never used to hold any woman’s hair – because it was simply too expensive. 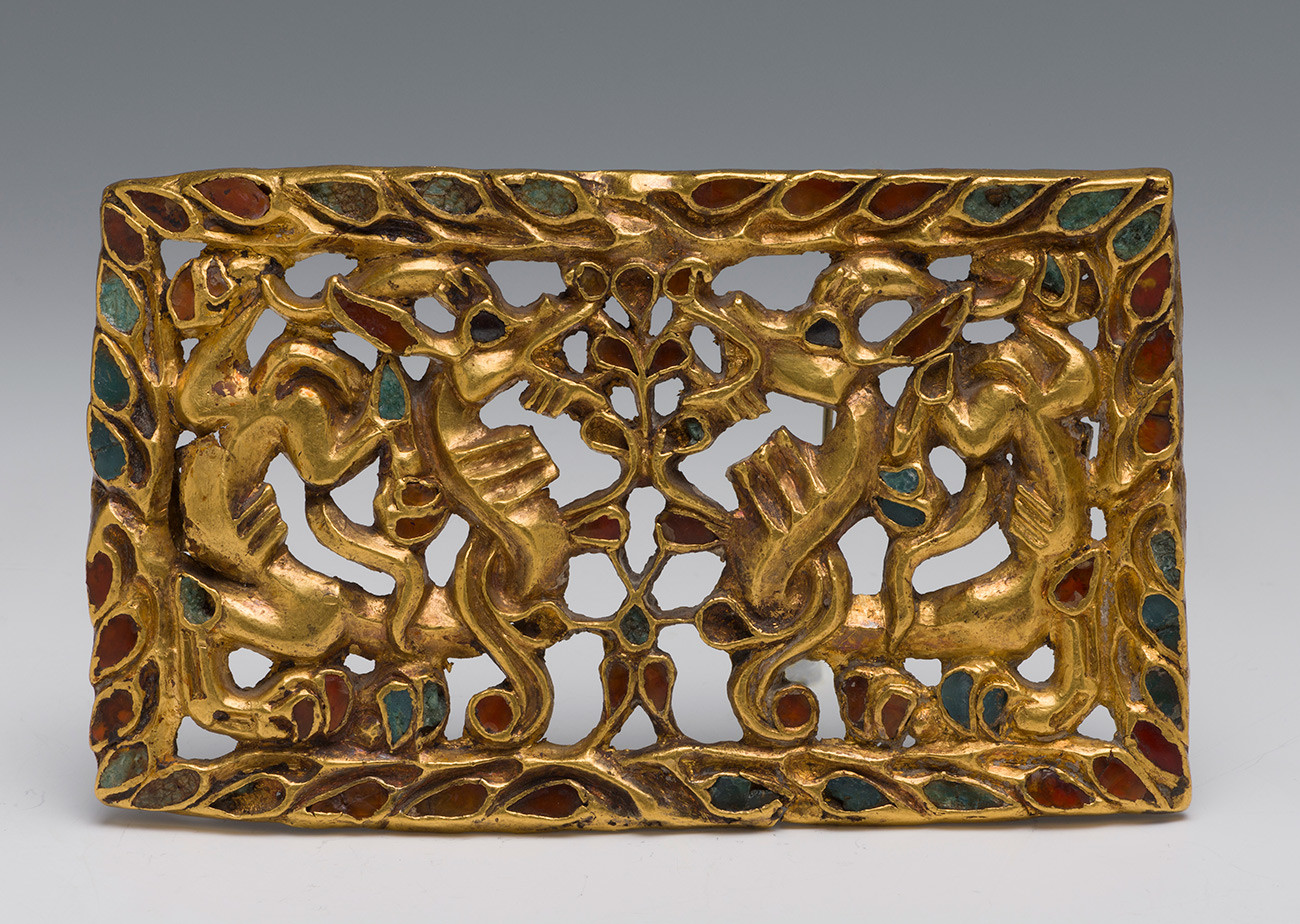 This unique decoration is not primitive, it’s just more than two thousand years old. This waist plate comes from Siberian nomadic kings. It was worth a fortune, and it’s a miracle that it still exists, considering the nomadic kings didn’t have palaces and treasuries to store such things.

10. The Almaznaya (Diamond) Cap of Peter the Great 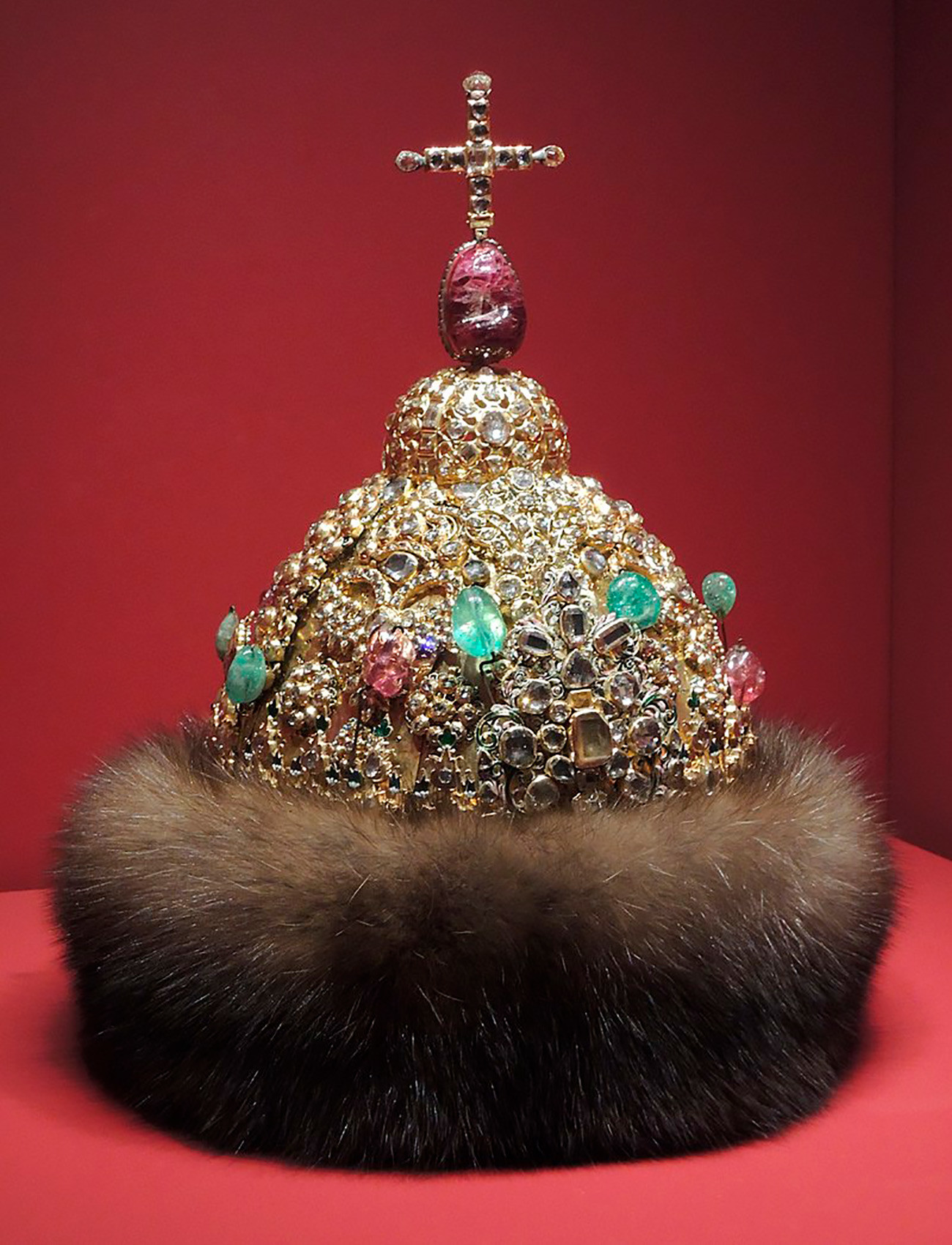 This cap (crown), created in the 1680s in Moscow, was given to Peter when he ruled the country together with his brother Ivan (Ivan's crown was much simpler). Peter last put this cap on in 1696.

Some of the most amazing artifacts from the private collection of Peter the Great are on display in the Moscow Kremlin museums till March 8, 2020