Why does the Russian Empire owe so much to the Netherlands? 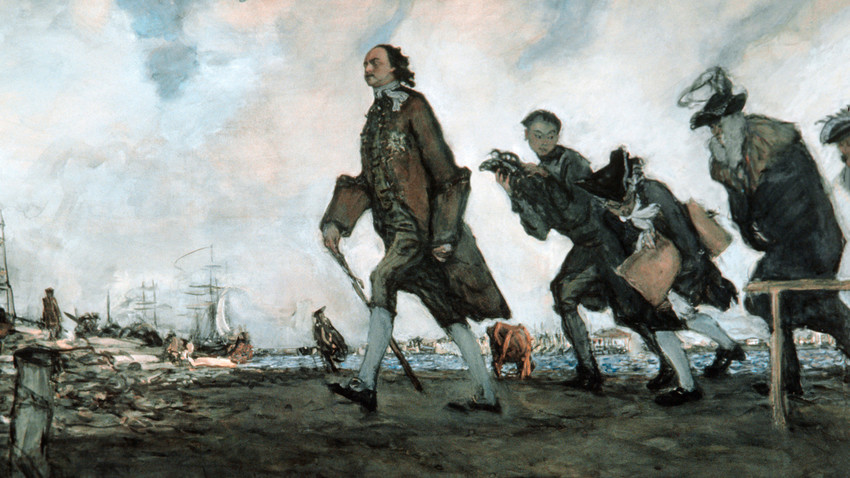 Alexey Bushkin/Sputnik
From the creation of the Russian navy to countless loanwords (and even the founding of Saint Petersburg!), how did a small republic on the banks of the North Sea become such a big example for the grand Russian Empire?

In early August 1697, a young tsar clad in simple clothing to remain incognito entered the Dutch town of Zaandam. He knocked on the door of a Dutch blacksmith, asking for a place to rent. Peter Mikhailov, as his fake name went, wanted to stay incognito, but the great number of people accompanying him made it very difficult. The tsar was on an important quest, after all - a quest that would eventually define the future of the entire Russian Empire. It was here, the Dutch Republic, where the journey of Tsar Peter the Great and his Grant Embassy truly started.

Russia had been lagging behind the rest of Europe in terms of progress and innovation. Having grown weary of the odd traditions of his fellow countrymen, Peter felt the need to throw open the doors to Western society. The goal was to shed some enlightened light onto Russia, to ultimately modernize and westernize the country. His reformations were the basis of the Russian state system for an entire era, up until 1917. 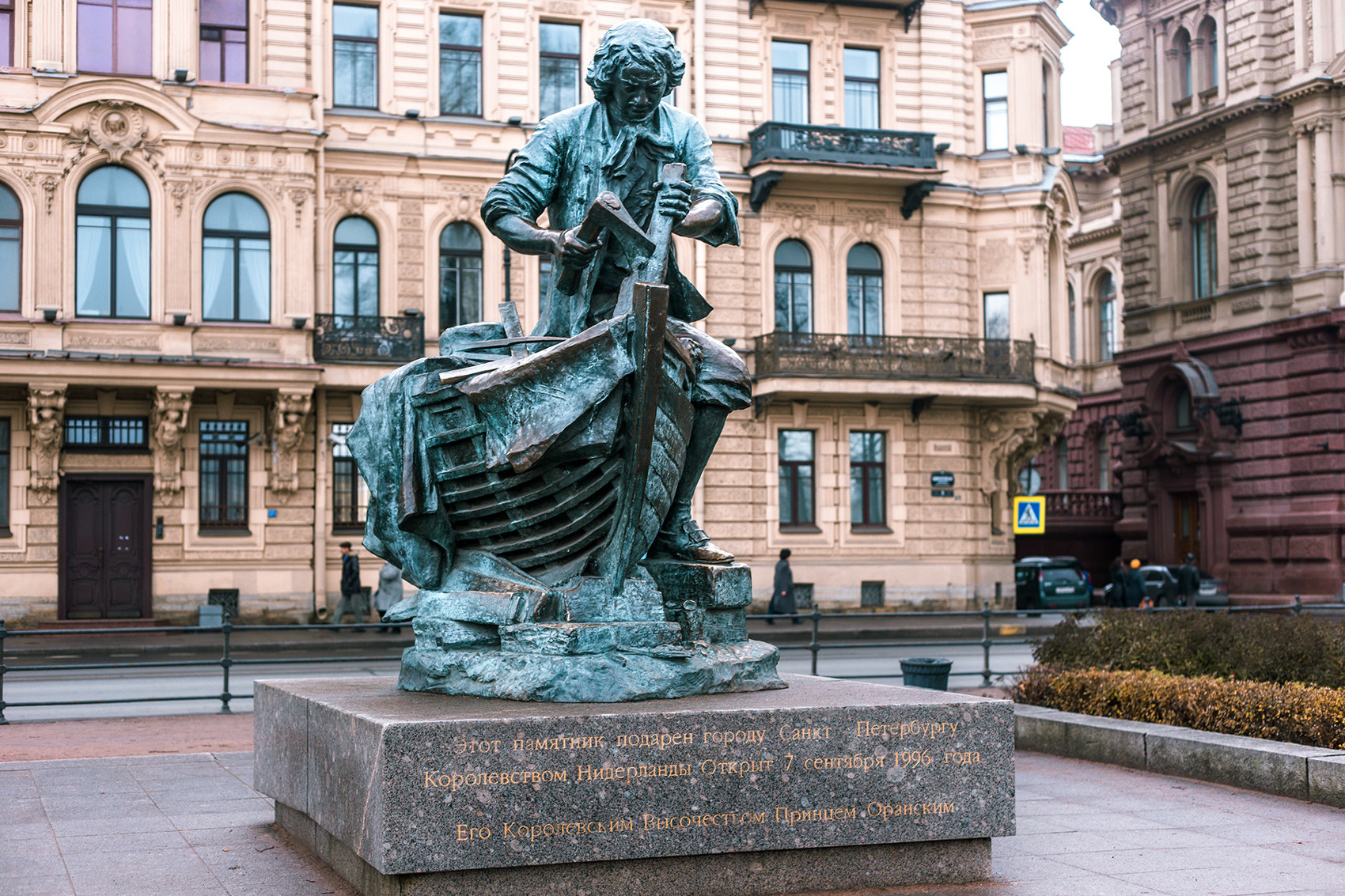 The monument to Peter the Great the shipbuilder, St. Petersburg

As part of Peter’s modernization efforts, a capable navy was an absolute must. Russia’s navy at the time was basically non-existent and the knowledge of shipbuilding was, therefore, fairly limited. The Netherlands was a well-established seafaring nation, and thus, reason enough for young Peter and his company to pay the lowlands a much needed educational visit.

Peter was an immensely curious tsar. He decided that it would be in his best interest to experience and observe European daily life with his own eyes (and hands). He rented a small wooden house and decided upon the construction of a banya in its garden (Peter expected to stay a while, and considered this a must).

The house that Tsar Peter resided in during his eight-day stay in Zaandam still stands today. In order to preserve it, the Dutch king Willem I bought it in 1818 as a gift for his daughter in law Anna Pavlovna, sister of Tsar Alexander I. A special building was erected around it to protect the structure from the elements. The house is currently one of the oldest remaining wooden structures in all of the Netherlands, and is open to visitors daily. 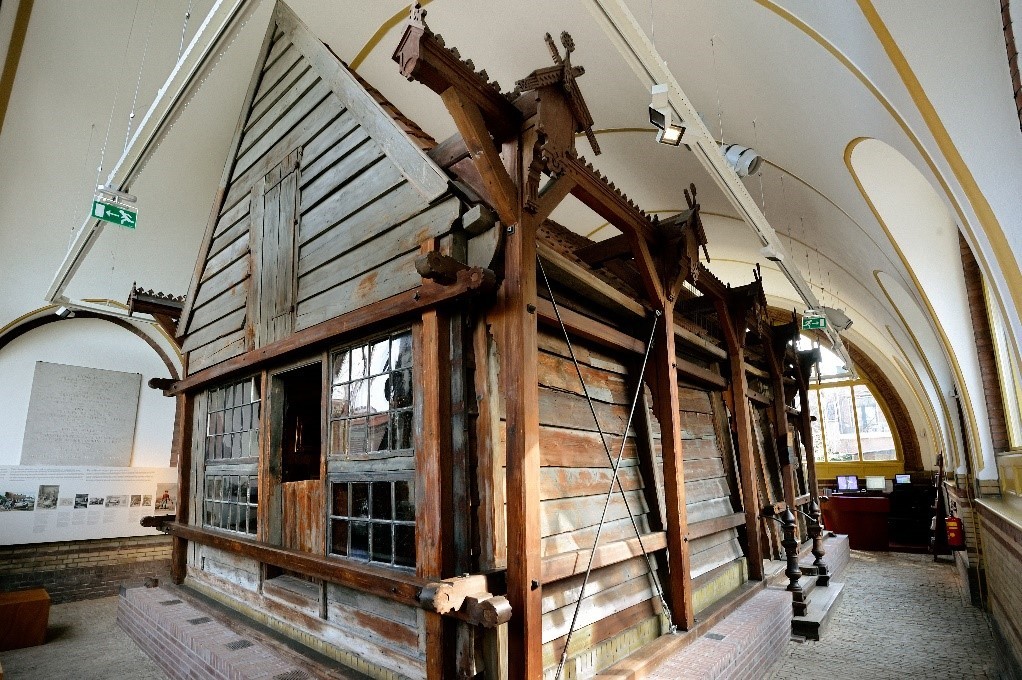 Peter the Great's house in Zaandam

The next morning, Peter got to work as a carpenter in one of Zaandam’s shipyards. His time working there would be short-lived, however, as Peter was easily recognizable to the nobility.

Needless to say, the news of Tsar Peter’s visit spread through the country like wildfire. Hundreds of people were out on the street, trying to catch a glimpse of the peculiar visitor from the east. As the local authorities were informed as well, they invited Peter to watch the launch of a new vessel. The tsar heartily accepted the invitation. It is said, however, that when Peter opened the door and saw the huge crowd of people waiting outside, he turned around and slammed the door shut.

Having had enough in Zaandam, he sailed to Amsterdam. The mayor of Amsterdam welcomed the Royal sincerely and arranged for a new workplace at the fenced-off Dutch East India Company shipyard. The tsar-carpenter rolled up his sleeves and went to work.

Peter and his company remained in Amsterdam for 4 months. Mainly practicing the craft of shipbuilding, Peter was also interested in the other skills Amsterdam had to offer. He engulfed himself in the art of gardening and book printing. Meanwhile, his skills with an ax would also prove highly effective for something entirely different. 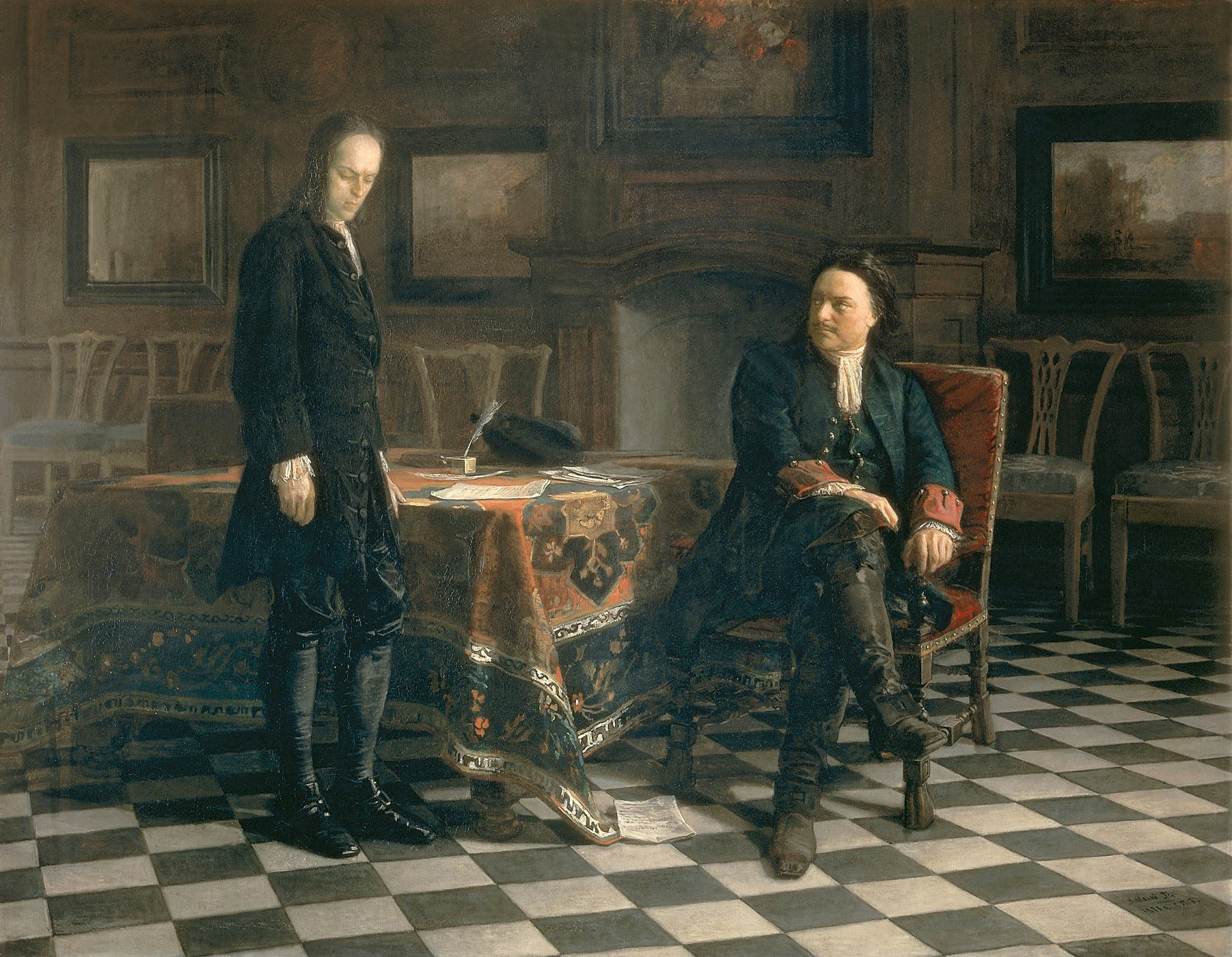 During his Amsterdam visit, Peter asked the administration to invite him to every torture and beheading taking place in the city. He was fascinated by these events and became a huge fan of torture. He even ordered his own son, Alexei, to be tortured to death for trying to defect to Europe in exchange for Russian military secrets.

Even though Tsar Peter highly disliked the Dutch use of old-fashioned building techniques, he invited hundreds of shipbuilders to come and work in Russia. As shipbuilding was an entirely new art there, most nautical terms did not exist in the Russian language. Tsar Peter was known for changing that and adding many new words to the dictionary. Without really undergoing any Russification, words like vympel (Wimpel, the Dutch word for pennant) and shturman (Stuurman, the word for shipmate) are still used to this day.

The Netherlands wasn’t Peter’s last stop in Europe. At the invitation of William III of England, who was also stadtholder of the United Provinces, the Grand Embassy visited England. He spent three months there, a good chunk of which was spent in Deptford’s royal docks, where Peter observed and mastered the famous English mathematical approach to shipbuilding. Peter also visited royal armories, workshops, museums, curiosity shops, and anatomical theaters. He visited the Parliament and Oxford University, was at the Greenwich Observatory, and the Royal Mint in the Tower of London.

What was missing on his list were galleries. Peter didn’t understand art. He skipped the magnificent gallery at the Kensington Palace but was impressed with the wind vane device William III showed him. 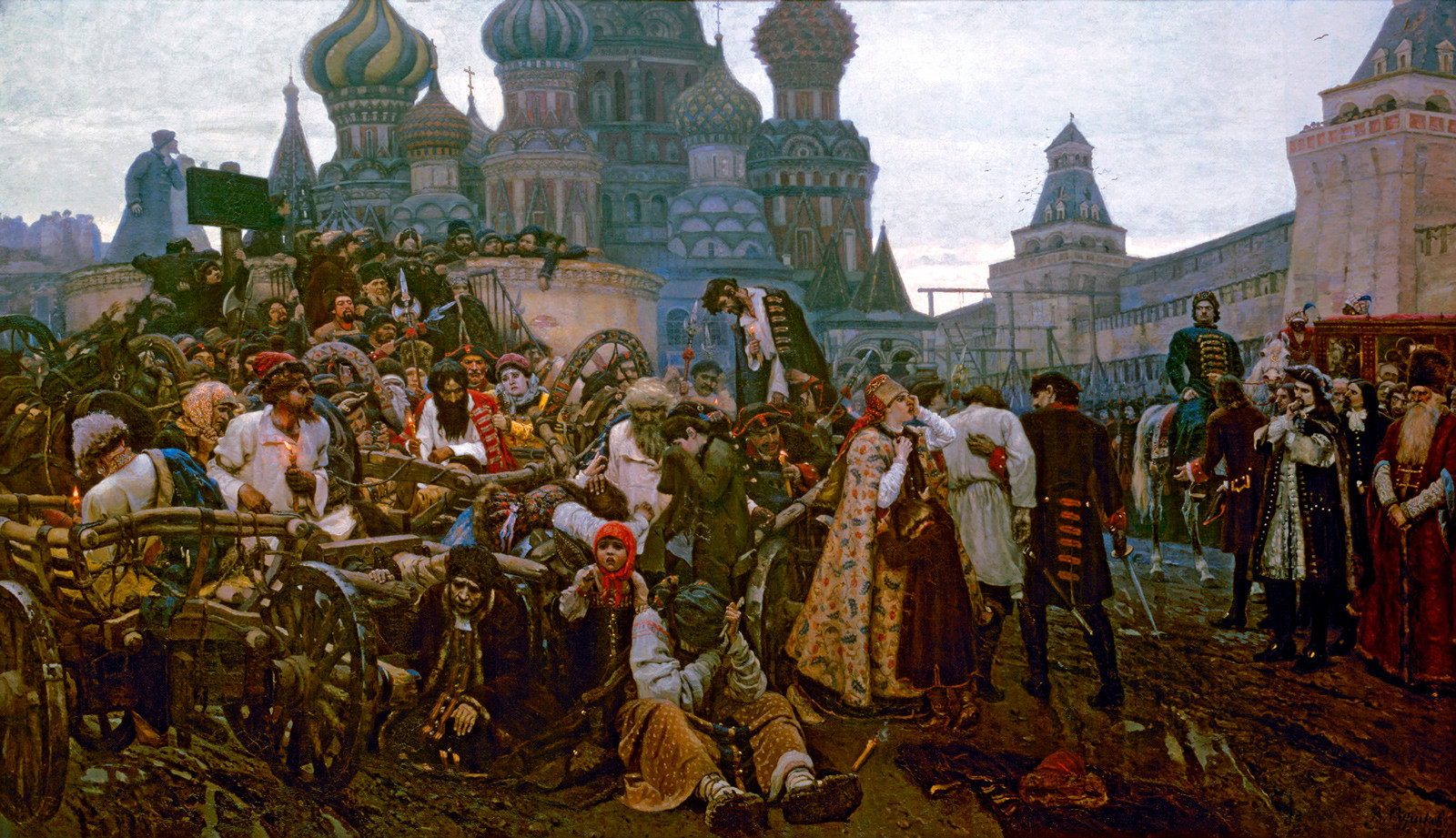 Vasiliy Surikov. 'The Morning of the Streltsy Execution' (1881).

After visiting several other countries, including France and Austria, Peter’s Grand Embassy was cut short in 1698. The Streltsy regiments at home weren’t too fond of Peter’s westernization efforts and started an uprising. Peter’s ax skills, mastered in the lowlands, came into good use here: he single-handedly beheaded several rioters.

Tsar Peter enjoyed his time in the Dutch Republic, and urged for a new port to enhance sea trade between Europe and Russia. The main port at the time was Arkhangelsk, but it often froze shut due to its northern location. Thus, Tsar Peter ordered the construction of a new capital city on May 27, 1703.

Peter’s Window on the West was born, the Venice of the North - Saint Petersburg. Owing to his obsession with Europe, Peter ordered the city to be designed like the Dutch capital Amsterdam, resulting in the Russian capital’s many grand canals and bridges. His new Admiralty shipyard was staffed by famous Dutch and English shipbuilders. 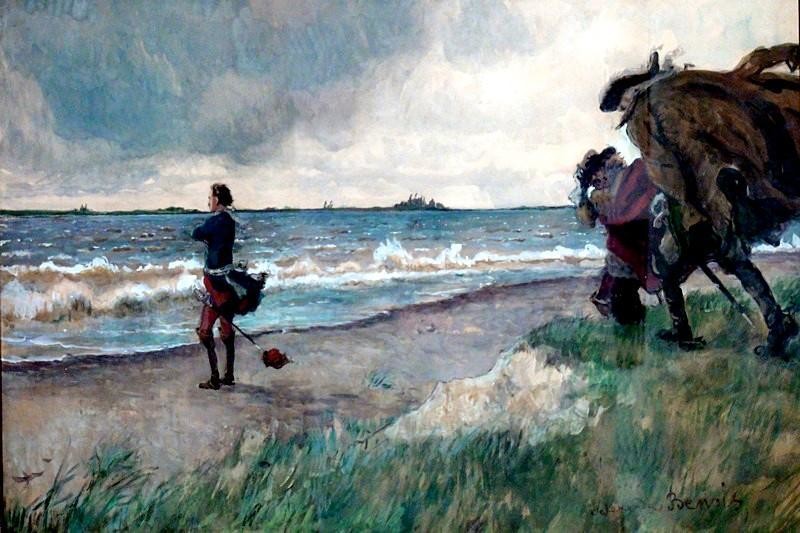 Everything in Saint Petersburg was carefully planned and designed with the aid of countless foreign architects, many of them Dutch. Nearly every building in the city was made in the Petrine Baroque style, a mix of the Russian Naryshkin and mainly Dutch and other European baroque styles. The construction of St. Petersburg took decades, however; the famous granite embankments were constructed some 200 years later, so the canals of the time were little more than ditches in the dirt.

Peter’s interest in the human body, which had sprung from a visit Leiden University, would eventually lead to the creation of the first museum in Russia - Kunstkamera. A decree by Peter ordered everything he considered special to be transported to St. Petersburg. The museum is open today, and still features Peter’s original collection along with the gradual expansion over the years, totaling around 2,000,000 items. 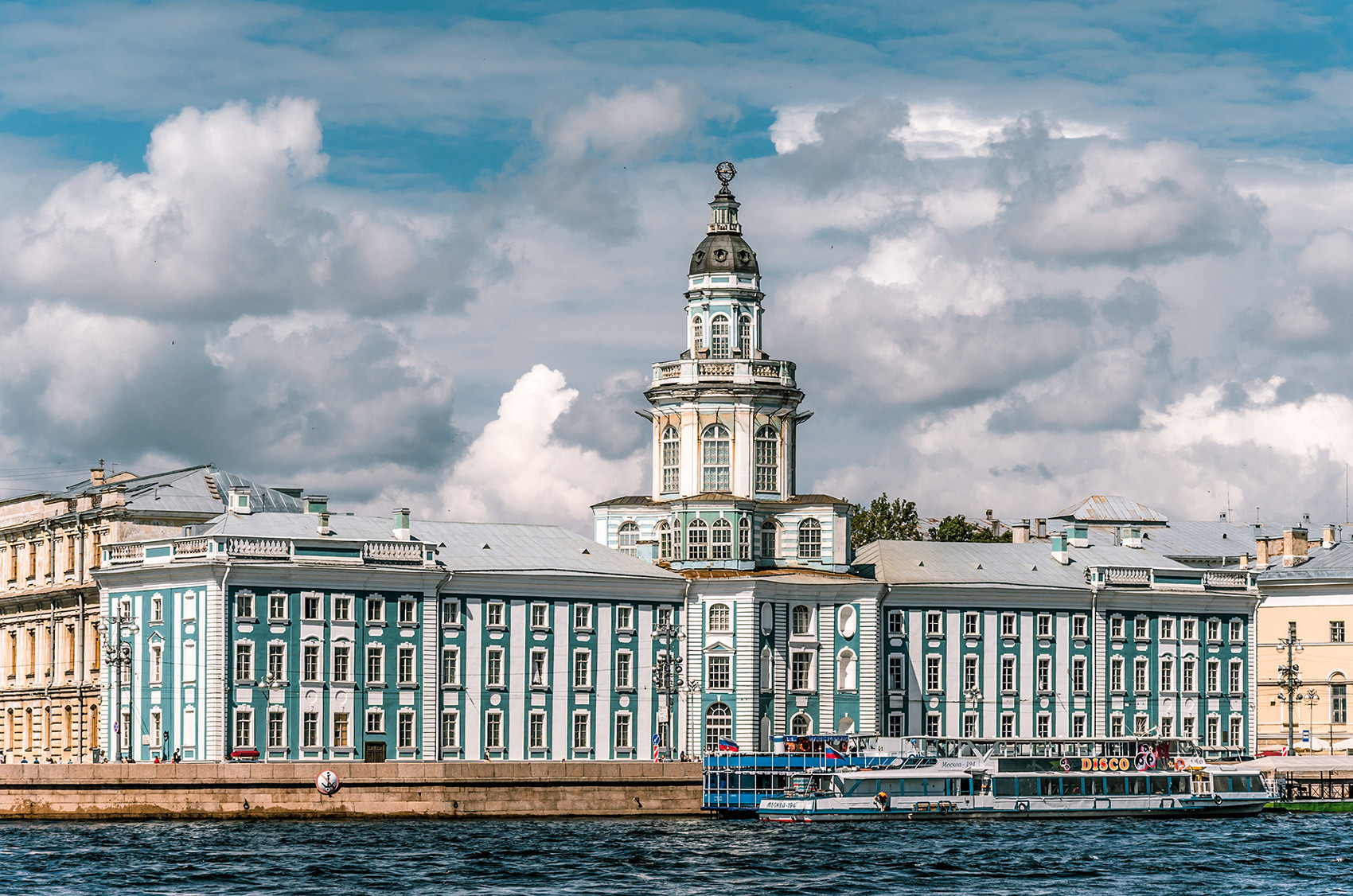 The Amsterdam of the East’s many canals were supposed to ease the transportation of goods and people over water but ended up posing a major threat to the everyday life of its citizens. During storms, the city was heavily prone to flooding. Since its founding in 1703, over 300 floods have been recorded, with the worst one occurring in 1824. The water level had then risen by a staggering four meters, leaving behind a broken city with thousands of casualties.

The Netherlands might be small in size, but it left a big mark on the history of modern-day Russia.