What was taught in civil defense lessons in the USSR? 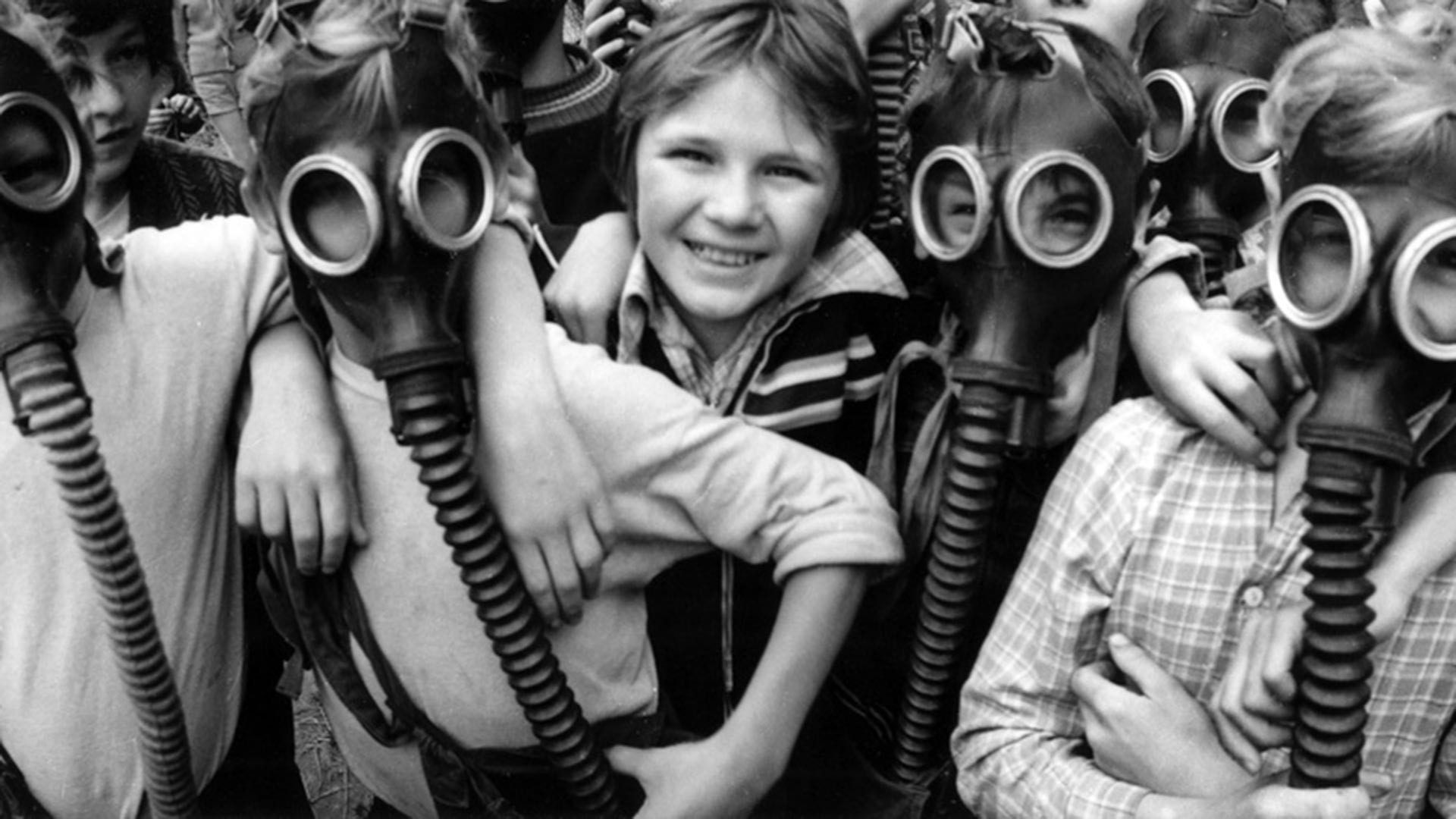 MAMM/MDF/Russiainphoto.ru
You still don’t know where to get a protective face mask? In the Soviet Union, every elementary school pupil knew how to make one themselves.

In Russia, as well as in Europe, teaching the population about the basics of civil defense began during World War I, which saw warnings of bomb raids appear for the first time, as well as the emergence of rules of conduct in the event of a chemical attack and instructions for providing medical assistance. In the 1930s, regular events were organized for citizens to inform them about means of protection against different threats. 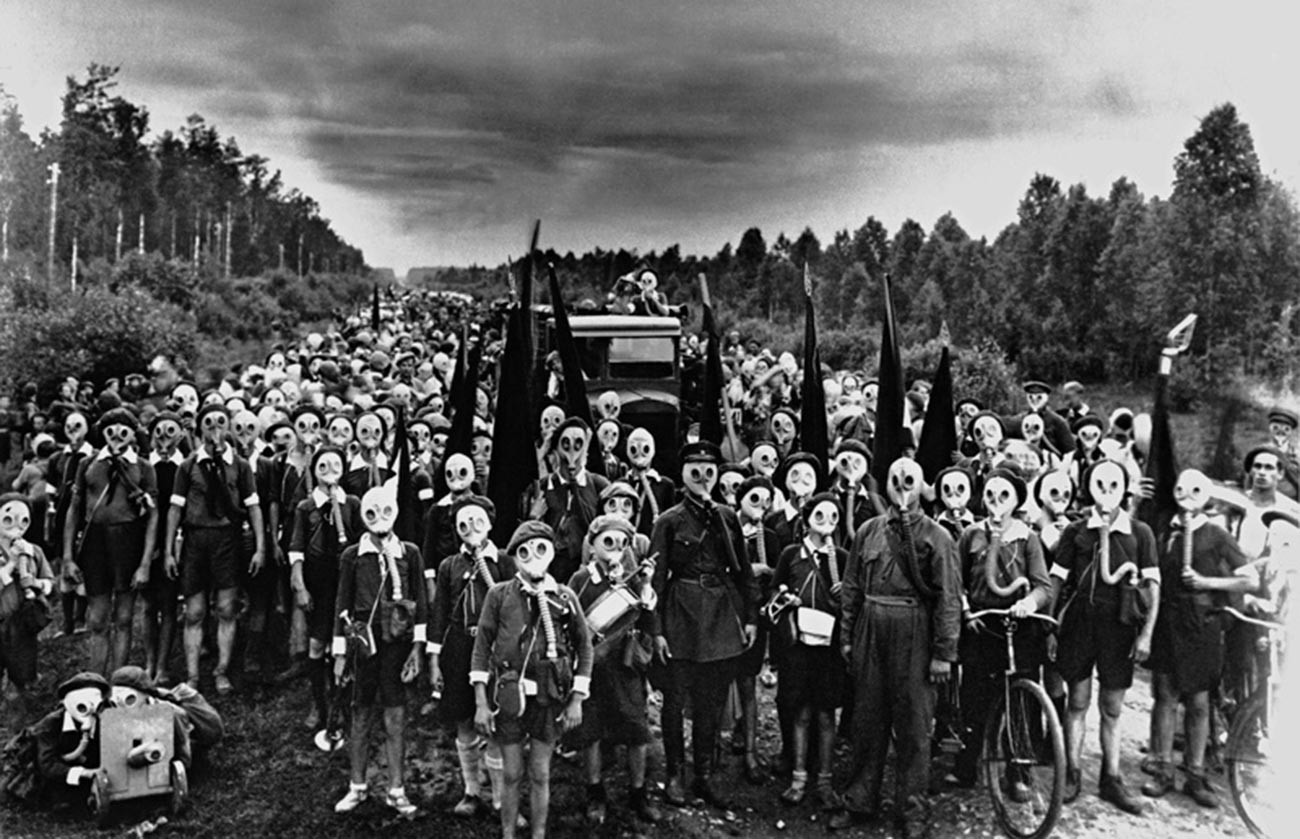 Pioneers at the civil defense lessons, 1937.

And the USSR’s civil defense system took definitive shape in the 1960s, during the Cold War, when civil defense HQs appeared in every settlement and at more or less every major enterprise.

From babies to pensioners

Lectures on civil defense and practical training were compulsory in the USSR from the age of eight and continued throughout one’s life. Their main objective was to teach citizens to protect themselves against the effects of nuclear, chemical or biological weapons. 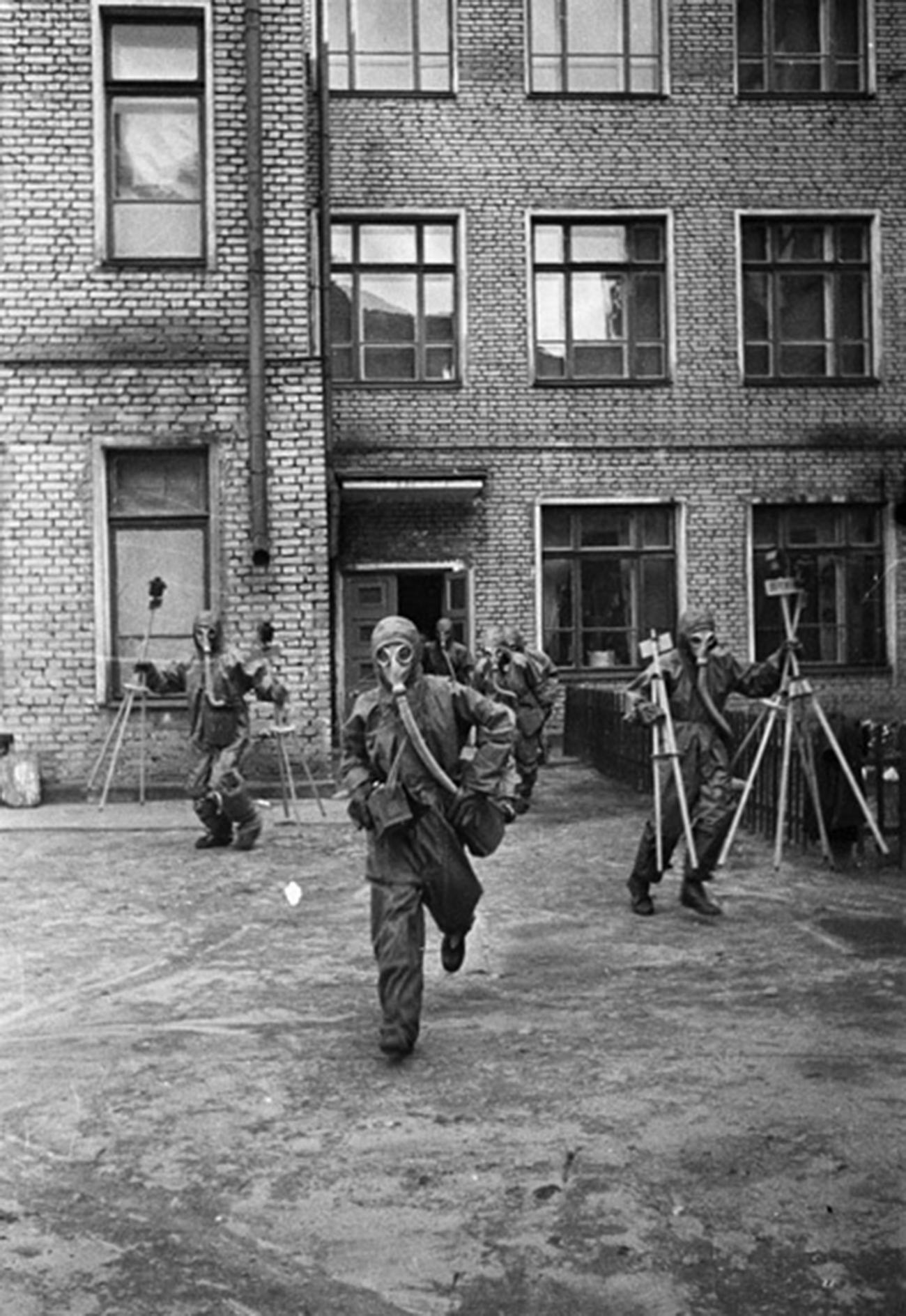 Teens at the civil defense lessons.

Introductory lessons started in the second grade of school. There were different courses for different age groups, but junior pupils already knew how to sew the most basic face masks from gauze and cotton wool, and to evacuate buildings when the alarm sounded. Children were told about weapons of mass destruction from elementary school. Schoolchildren knew they needed to hide from the shock wave of a nuclear explosion in a forest or ravine, and from radiation in an underground shelter. 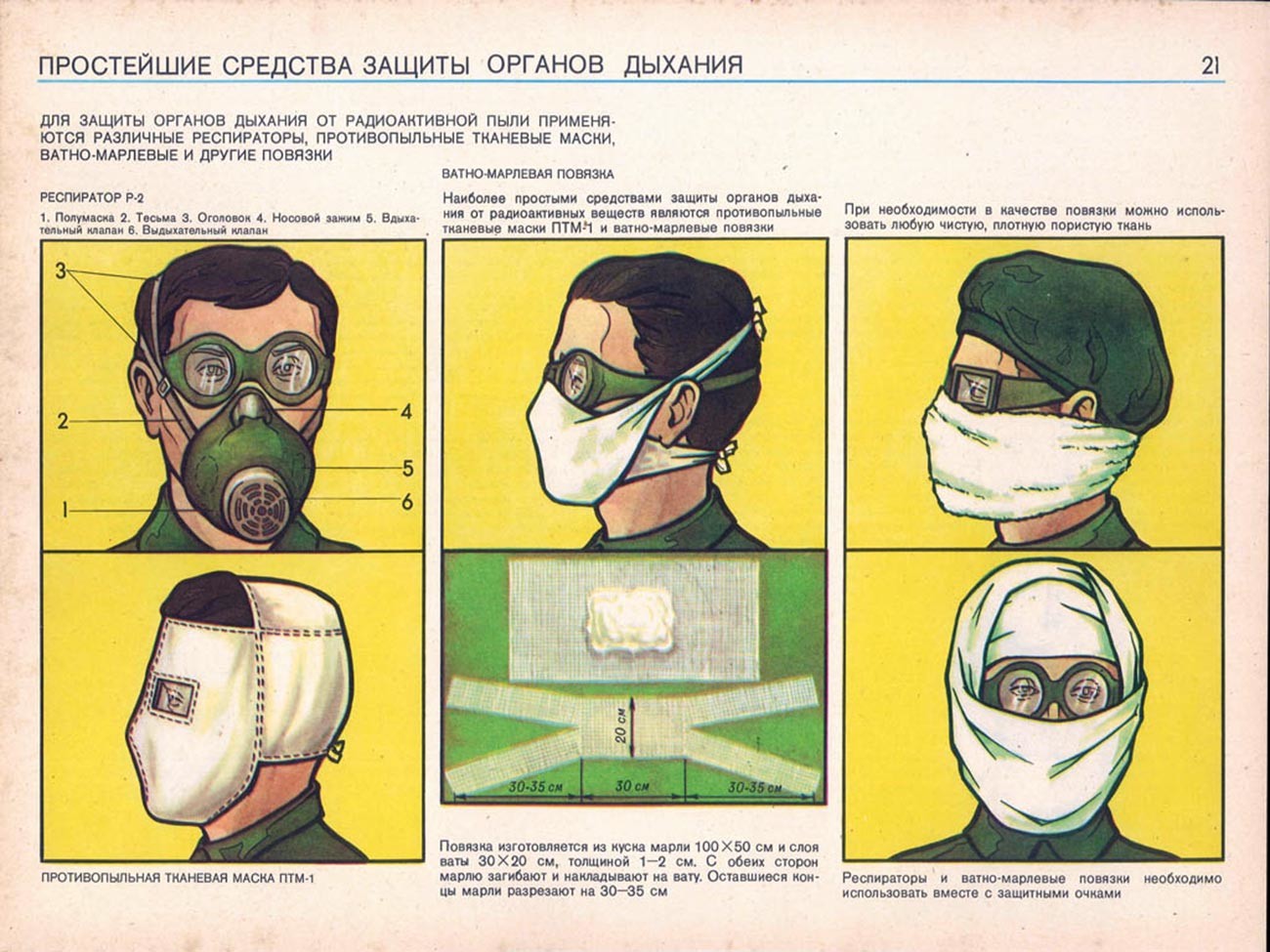 Did you think that children just relaxed outdoors in young pioneer camps? Far from it. They had team games like Zarnitsa, in which youngsters trained to get their geographical bearings and administer first aid. 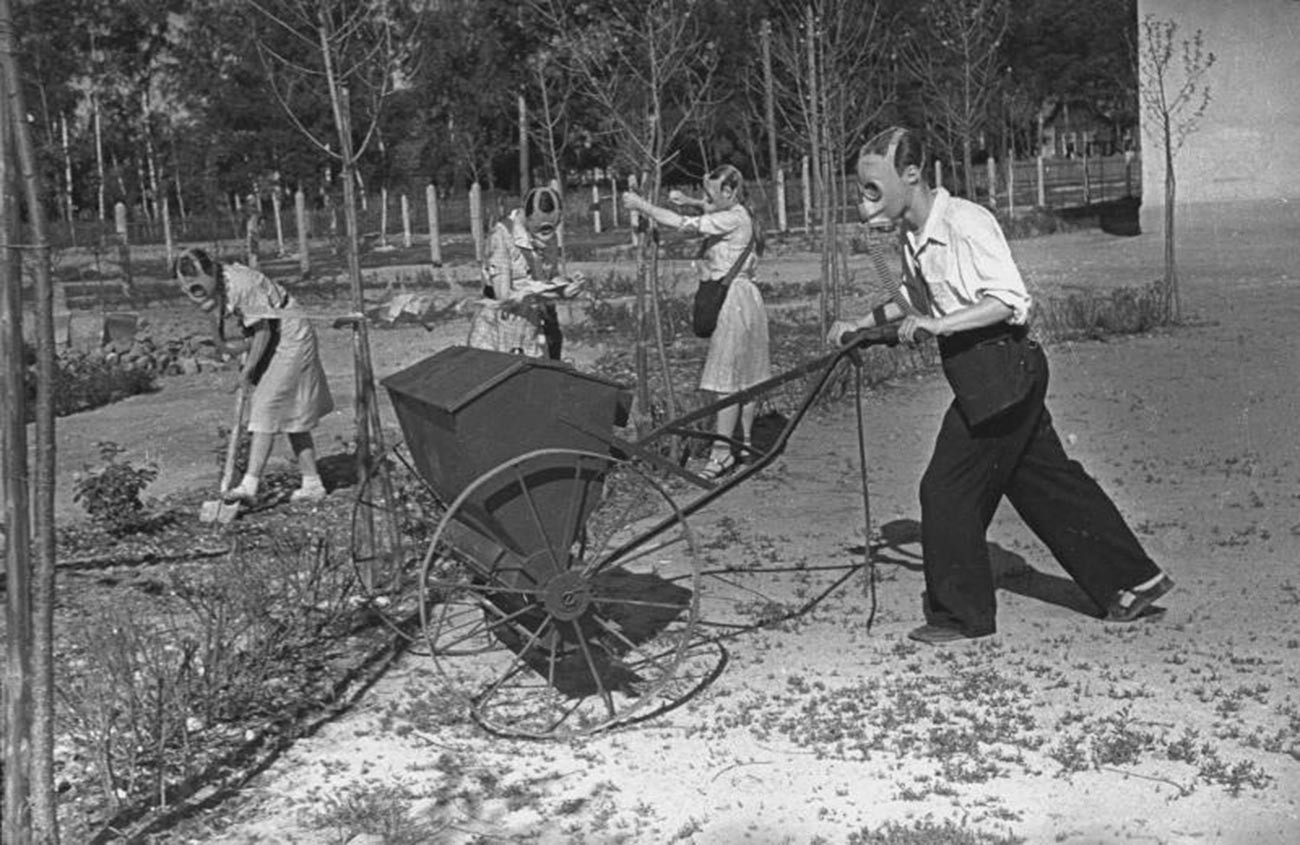 School children at the desactivation lessons, 1942.

In secondary and higher educational establishments, and at enterprises, civil defense drills were conducted in accordance with people’s individual skill sets. 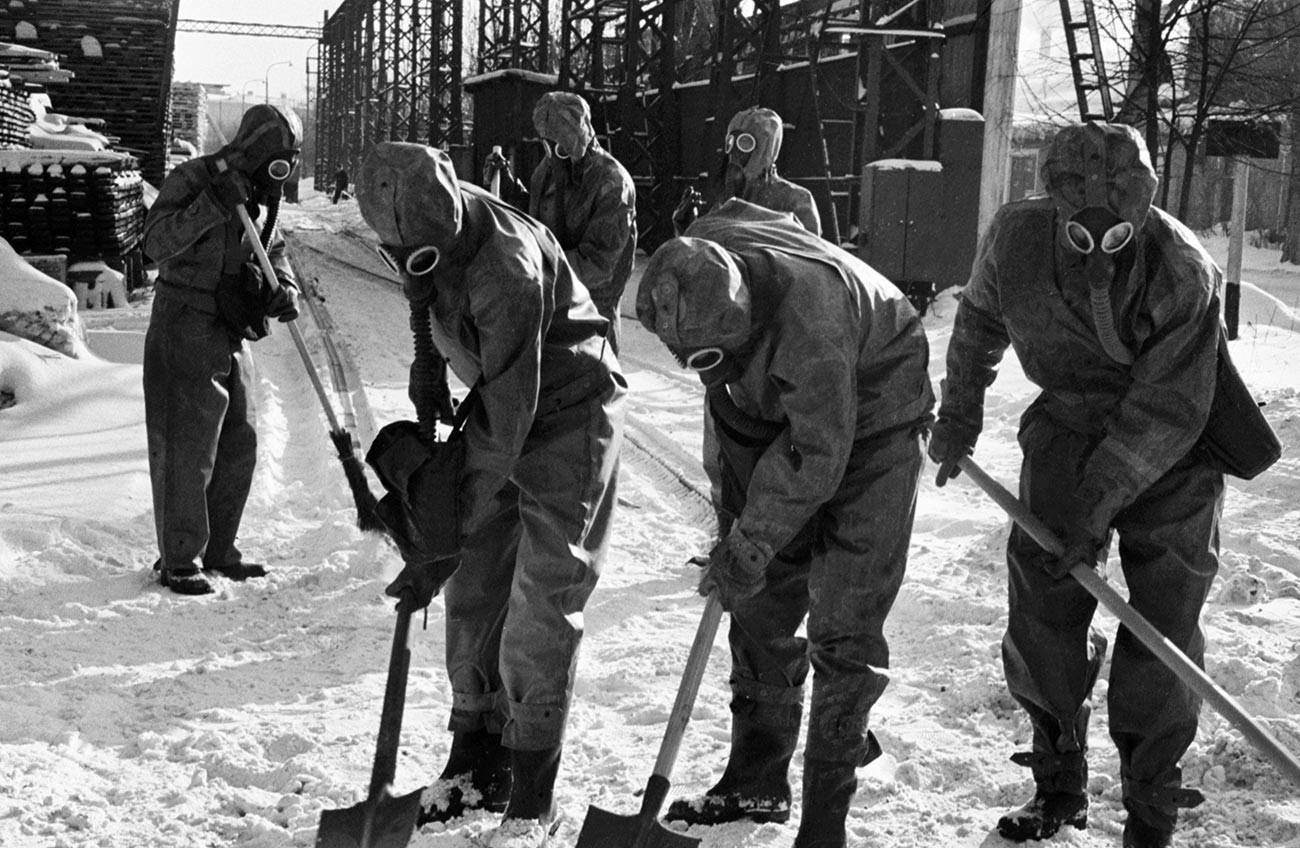 The civil defense exercises at the Moscow locomotive repair plant.

Special protective hoods with clear plastic windows for mounting on strollers or sleds were developed for children who couldn’t yet wear gas masks because of their age. 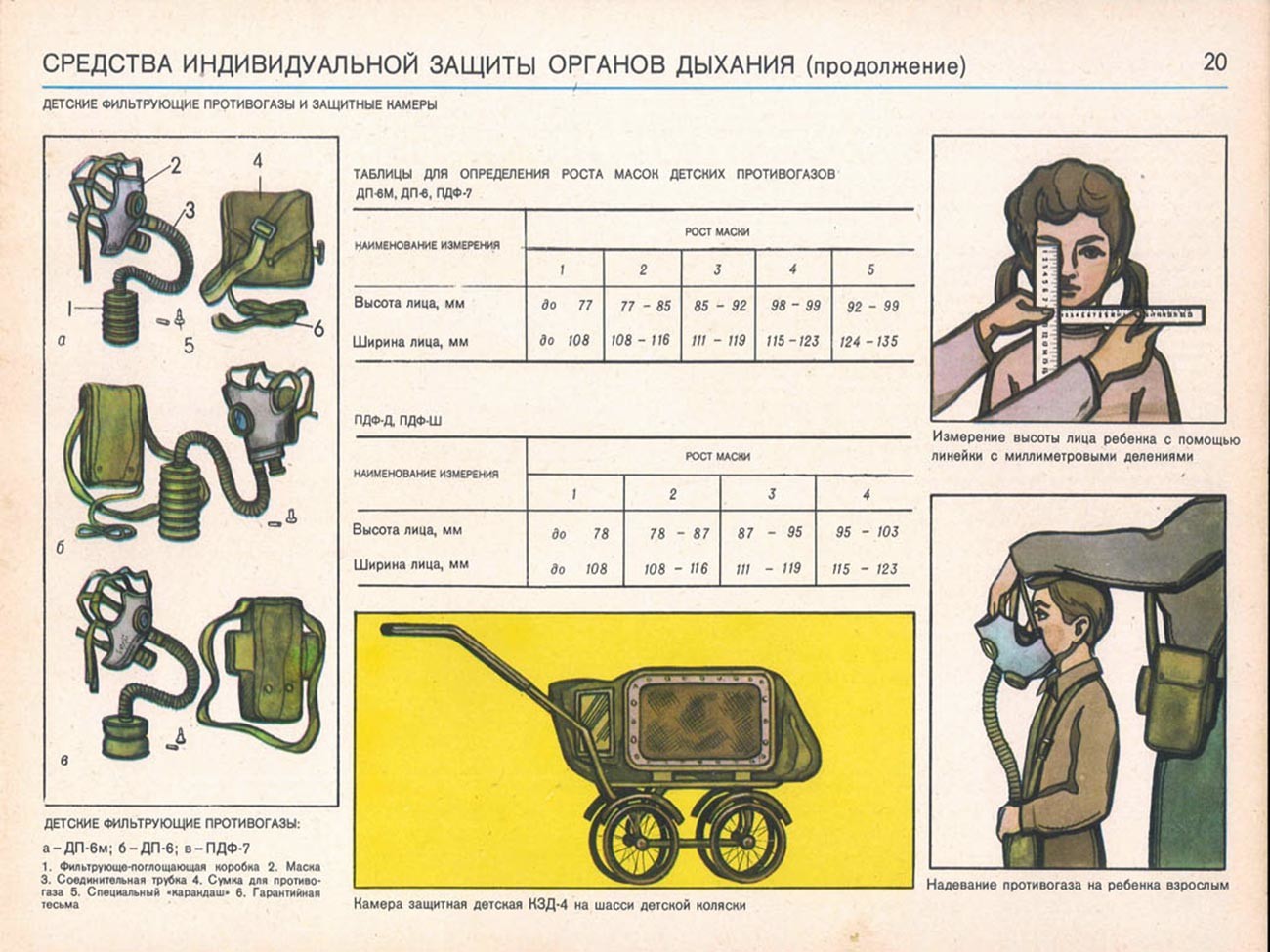 Local civil defense agencies organized lectures for pensioners in the courtyards of residential buildings and in parks. Moreover, irrespective of age, special attention was devoted to moral and psychological training. People were taught to stay calm and act according to instructions in all circumstances. 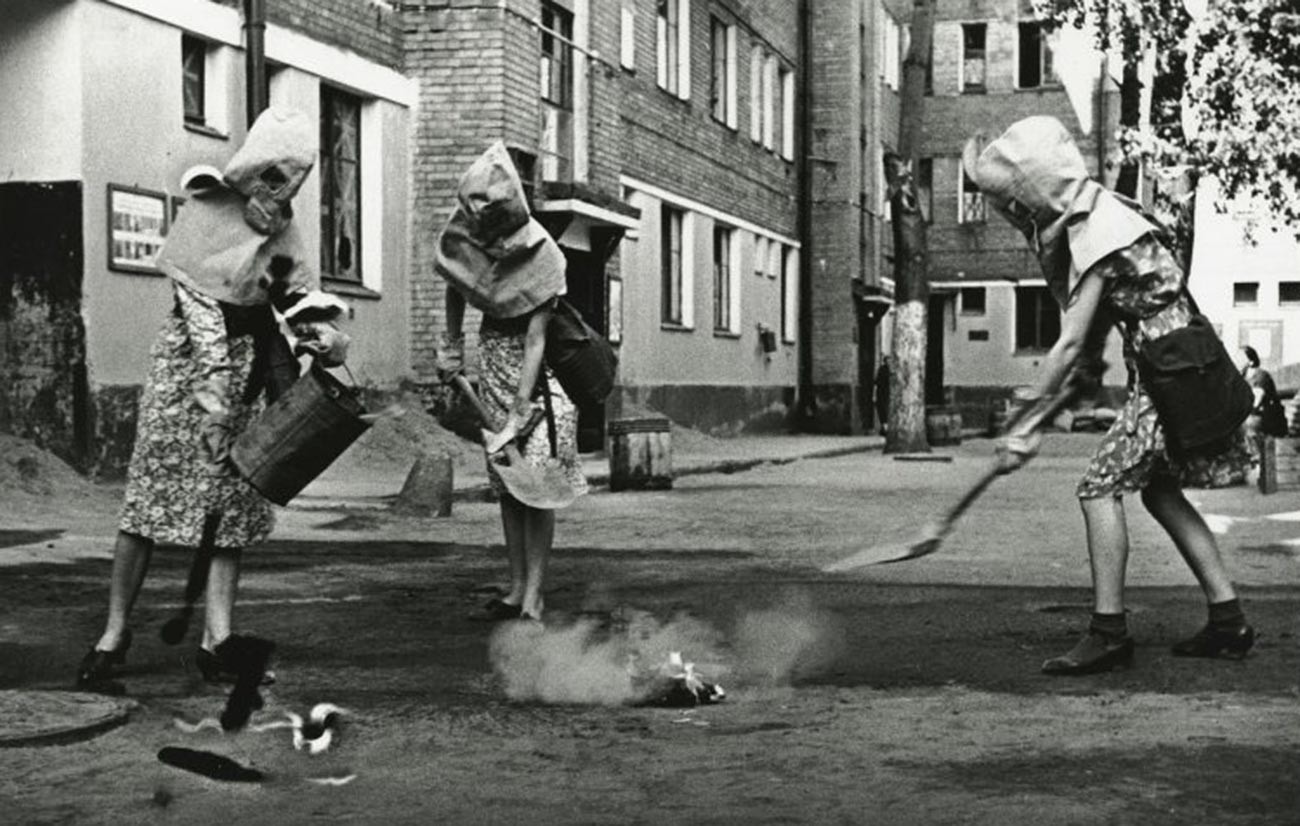 In addition to the lectures, Soviet citizens had to meet certain training standards. For instance, people were required to select a gas mask at speed: when the order was given, you had to go up to a table, take your head measurement, find the right size of gas mask, screw the filter canister to the mask, put it on and check for airtightness. A time of one minute was regarded as excellent, while two minutes got you a bad mark. Another test required people to put on their own gas mask at speed: 10 seconds was excellent, but anything over 12 was unsatisfactory.

To the order, “Blast left (or right)”, you had to throw yourself to the ground, the idea being to find some protection from the nuclear explosion. There were three seconds allowed for this. Candidates were marked down for inaccurately assessing the protective qualities of the location or failing to hide their hands or head. And there were similar standards for dispensing medical aid and building protective positions, for the speed with which people were to throng into shelters, and so on. 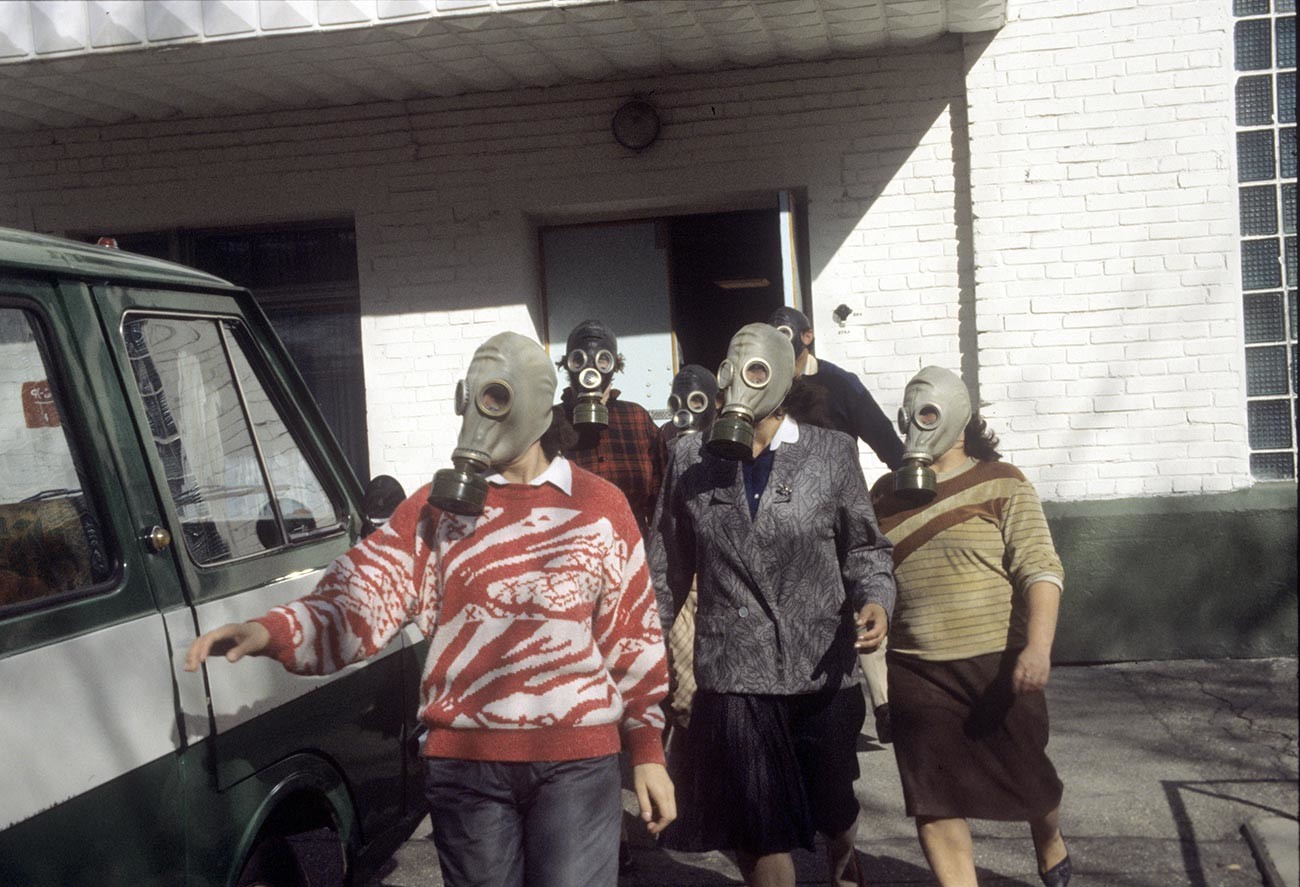 Additionally, a brochure titled ‘What everyone should be aware of and know’ was published for a broad readership. It began with the assertion that “the imperialist camp is preparing the most terrible crime against humanity - a world thermonuclear war that could result in unprecedented destruction”, and so the duty of every Soviet citizen was “even in peacetime to study ways and means of ensuring protection against weapons of mass destruction and to know how to implement them in practice”, in order to protect their family.

It outlined in detail the measures that were to be taken in response to particular threats. For instance, if biological weapons were used (in the USSR, anthrax, plague and cholera were regarded as the most dangerous biological agents), a quarantine would be imposed in the affected hotspots: Mass cultural institutions would be closed down, transit into and out of the area would be controlled and special sanitary brigades would make door-to-door visits. Family members and anyone who had contact with an infected person would be issued with emergency preventative and protective gear and would be put under regular medical observation. After that, interiors of buildings would be disinfected and brigade members would be decontaminated.

Although many people didn’t take exercises of this kind too seriously, many families in the USSR possessed gas masks, and youngsters could sew masks from improvised materials and knew where their nearest bomb shelter was.

After the collapse of the USSR, civil defense was put under the jurisdiction of the Ministry of Emergency Situations, and factories and educational establishments today only hold fire safety drills - in other words, people are trained to evacuate buildings when the alarm sounds. Civil defense lessons are still conducted, but not on the same scale. Former shelters have become places of pilgrimage for urban explorers, or have been turned into museums, or have been mothballed. The older generation nevertheless still remembers how to act in the event of a threat from weapons of mass destruction. 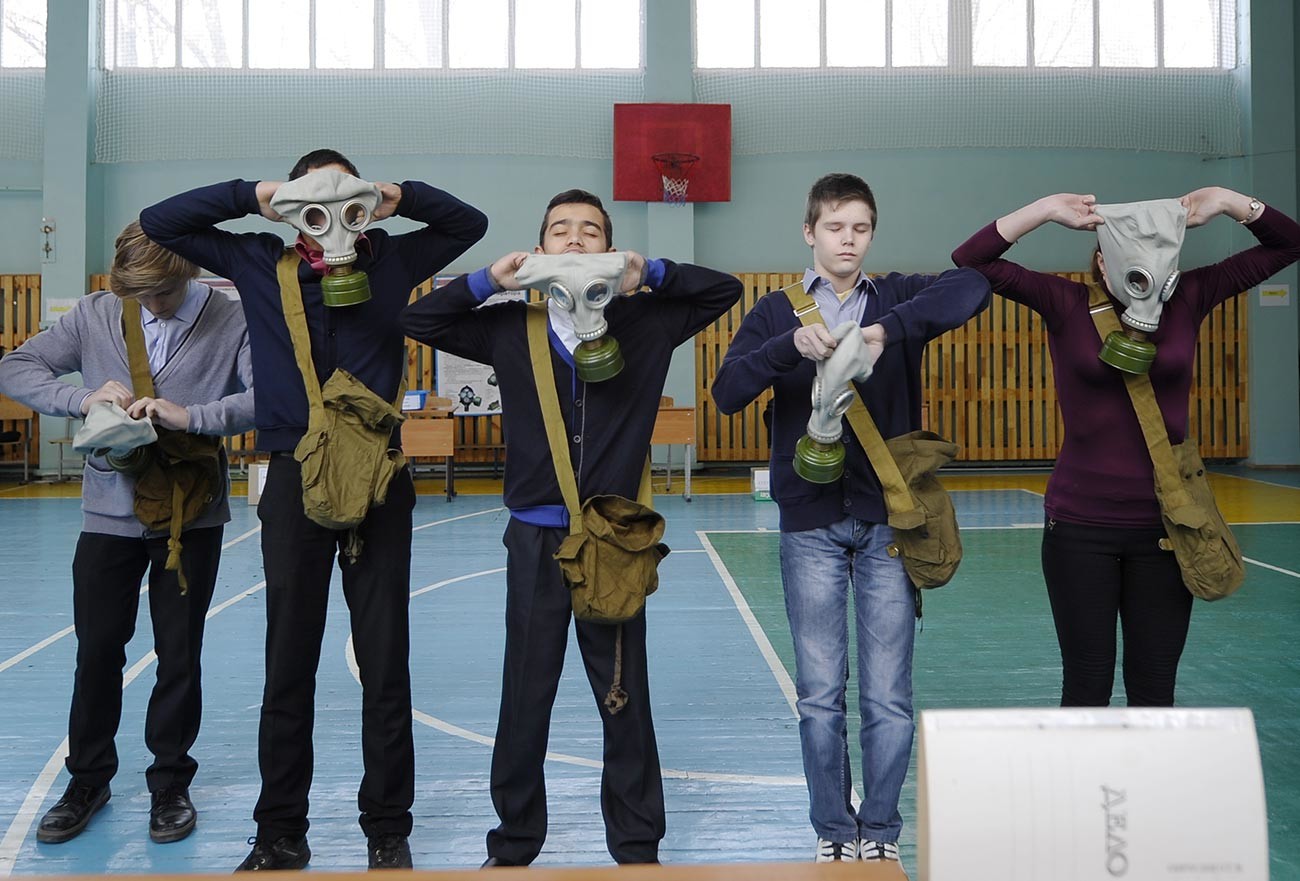